4 Myths About Kitchen Hoods That Need To Go Away

When it comes to designing a great kitchen, everything boils down to one thing – efficiency. Whether it's the layout, flooring or storage fixtures, everything should (ideally) run like clockwork to make your cookouts as fuss-free and comfortable as possible.

With that in mind, a hardworking kitchen hood is one ally that you'll want on your side, especially if the most apt description for your kitchen is 'smoky and hot'. 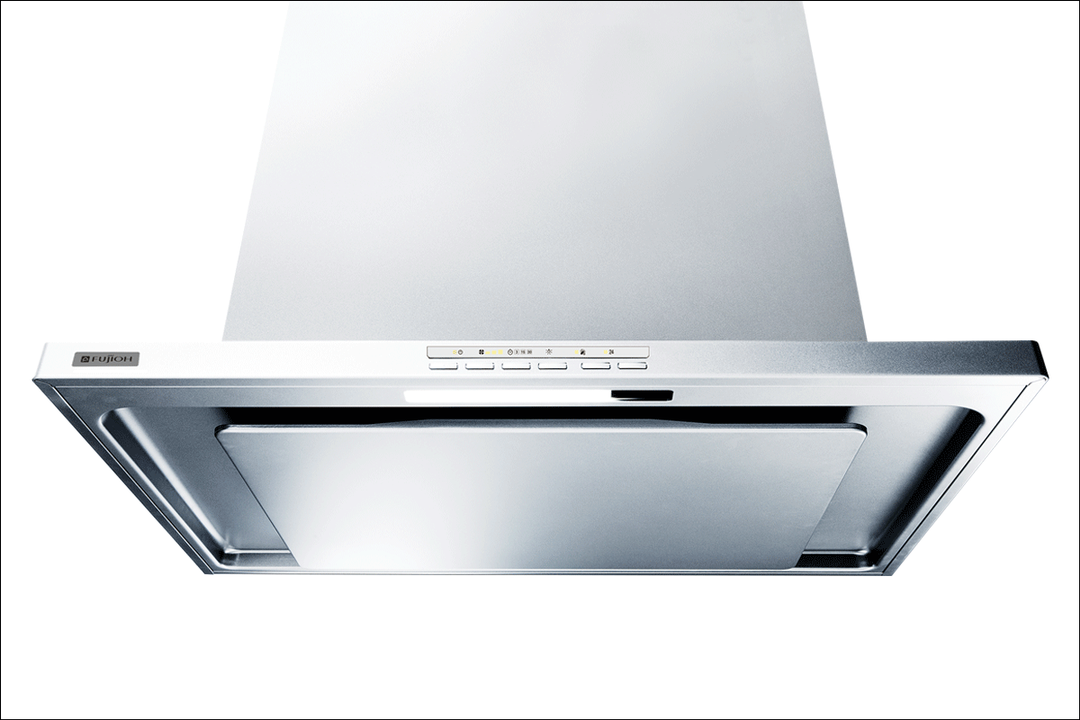 That said, there are a couple of myths revolving around this humble appliance and why homeowners prefer not to use it: some say it's too loud, others say that it's too difficult to clean.

But what's the truth? We set the record straight with the help of FUJIOH's latest 'made-in-Japan' hood: the FR-CL1890.

Somewhat False. While it's true that hoods aren't exactly the sleekest appliances in a kitchen, there's a good reason for their size.

The majority of kitchen hoods available in Singapore have a standard width measuring approximately 600mm or 900mm (a useful rule-of-thumb to take note of if you are planning your kitchen's layout), which provides just enough overhead coverage so that cooking fumes from your hob are efficiently absorbed. 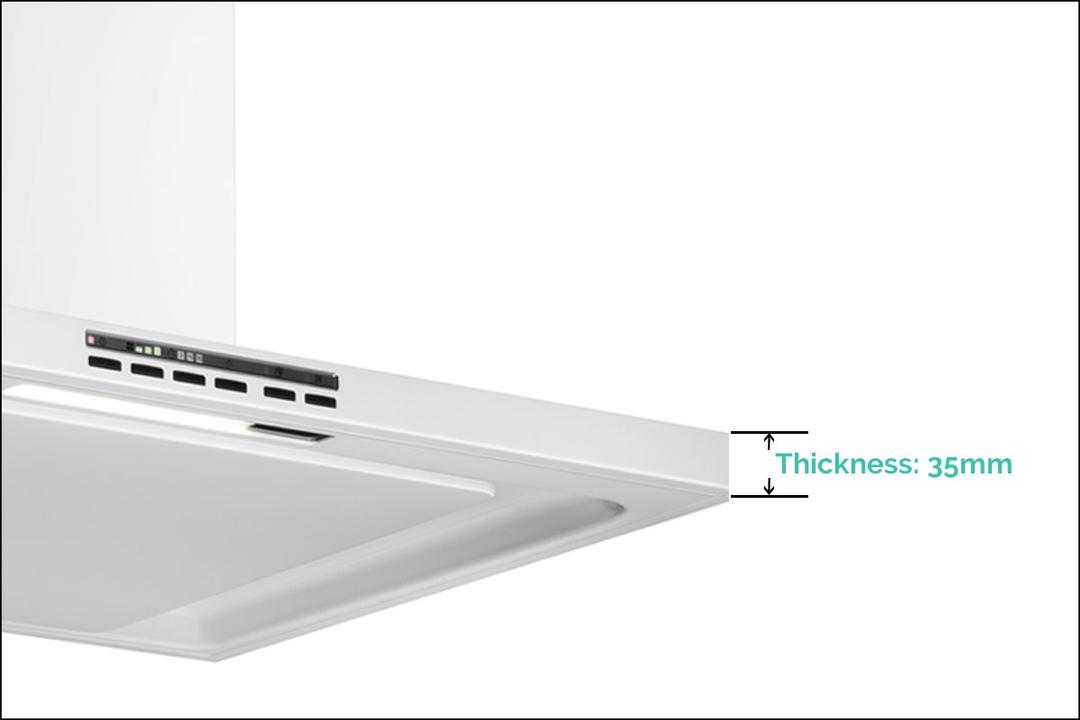 In addition, newer models on the market are designed with aesthetic appeal in mind.

Aside from its stylish range of colours (white, grey, and glossy silver), the FR-CL1890 also possesses an ultra-slim front profile due to the 35mm thickness of its main body – making it an attractive fusion of style and performance that is meant for the design-savvy home chef.

Somewhat True. If you have an older hood in your kitchen, this statement probably rings true. Unless you are blessed with deft fingers, infuriating features on earlier hood models like awkwardly-positioned latches and screw-on protective casings will make the process of removing internal oil filters hard.

For those who aren't consistent with their housekeeping (don't worry, we all have our flaws), the slipperiness of accumulated grease will also raise the difficulty and yuck factor of cleaning an older kitchen hood. 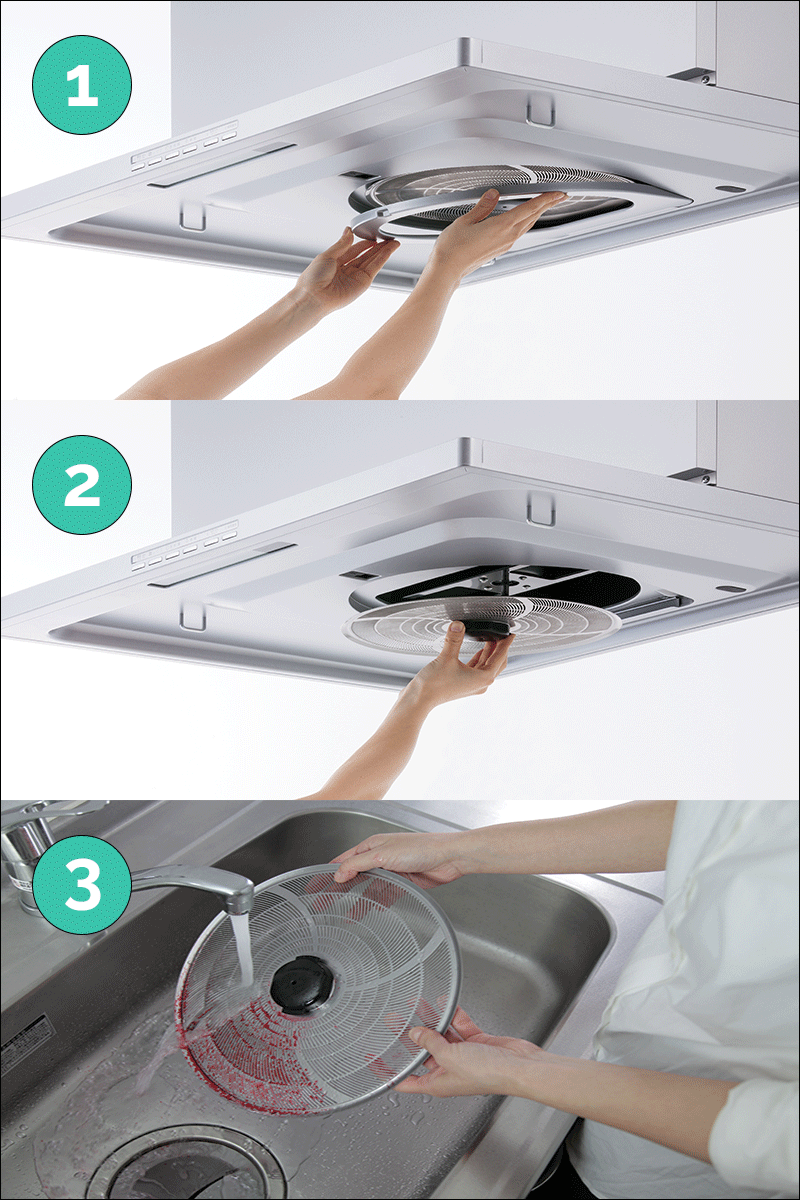 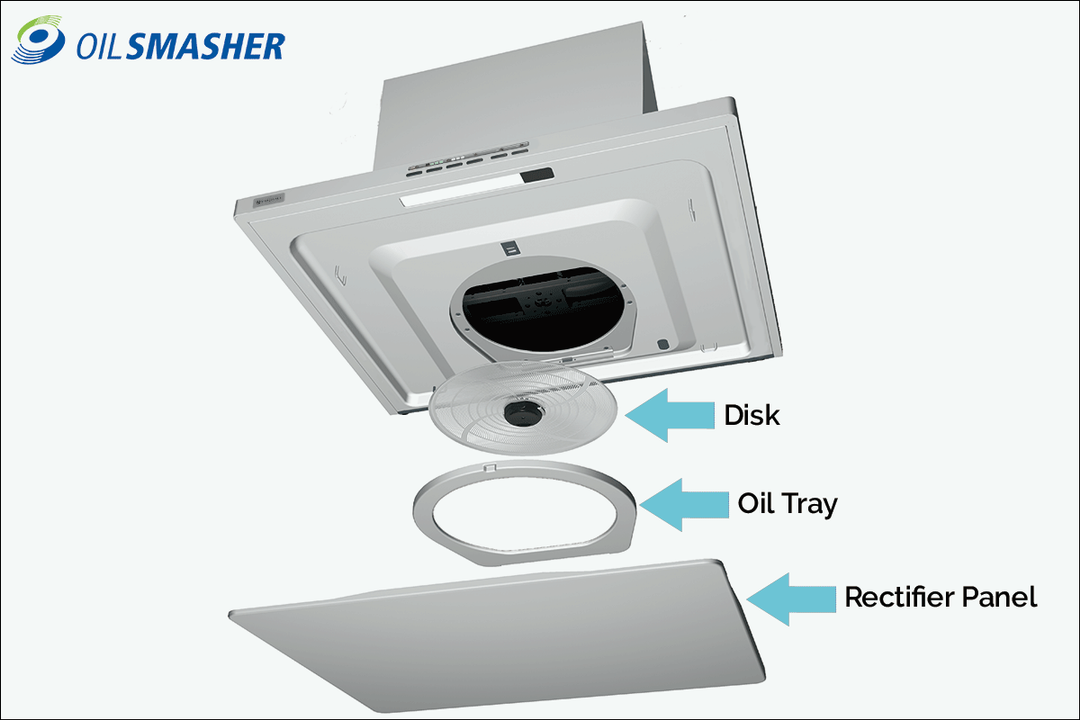 Taking things to the next level is FUJIOH's FR-CL1890, which comes with all of the above features, and more.

Aside from being coated in oil-repellant paint for quick wipe downs, the FR-CL1890 also possesses the latest in oil filter technology: the OIL SMASHER.

Consisting of a stainless steel disk that spins at high speeds to keep oil away from internal components, the OIL SMASHER is as straightforward to clean as it is effective.

Just pop open the rectifier panel, then remove the disk and oil tray for a good rinse off – it's that simple.

Somewhat True. It's often said that 'big is always better', but when it comes to a kitchen hood's performance, another factor comes into play other than airflow (i.e. The volume of air your hood takes in), and that is suction efficiency.

According to research done by FUJIOH, a kitchen hood that is capable of taking in a larger volume of hot air is a good thing to have, but what if it ends up being too powerful?

The result is inefficient performance as the excessive suction will cause a larger influx of hot air from the outside, and not to mention, plenty of noise. 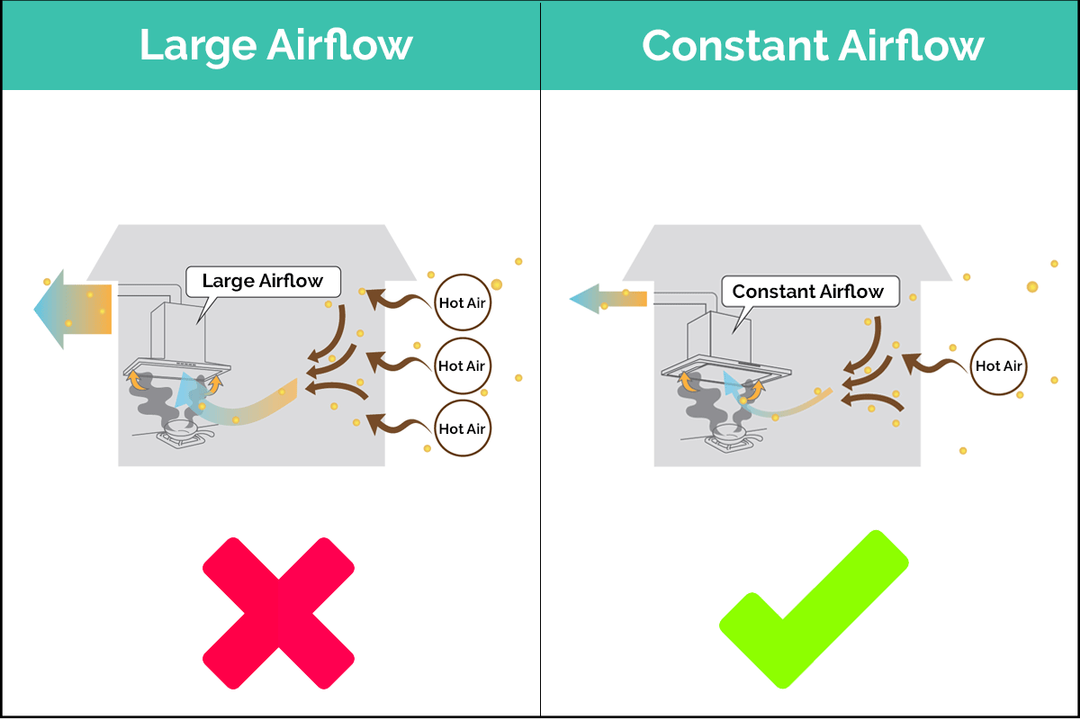 In contrast, the FR-CL1890 avoids this problem with the help of its DC motor, built-in microprocessor and rectifier panel (a hood component that helps to gather smoke and oil fumes) to achieve the desired result of a faster, but stable suction speed.

False. While they may look the same on the surface (read: external casing), the two main types of kitchen hoods: recycling and ventilating, are anything but similar when it comes to their inner workings. 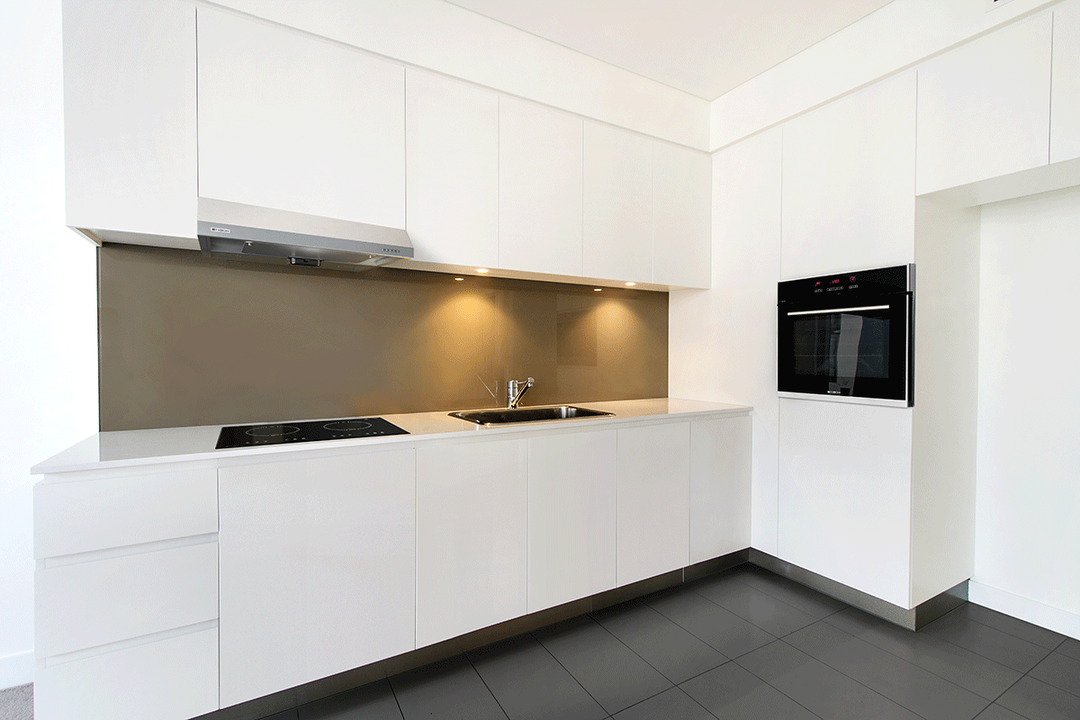 Recycling (a.k.a. Recirculating, extractor or ductless) hoods work by filtering airborne grease, smoke and particles from the air that it sucks in, before releasing it back into the kitchen.

Conversely, ventilating (or ducted) hoods take the easier route: by simply releasing the air outside through a system of ducts. 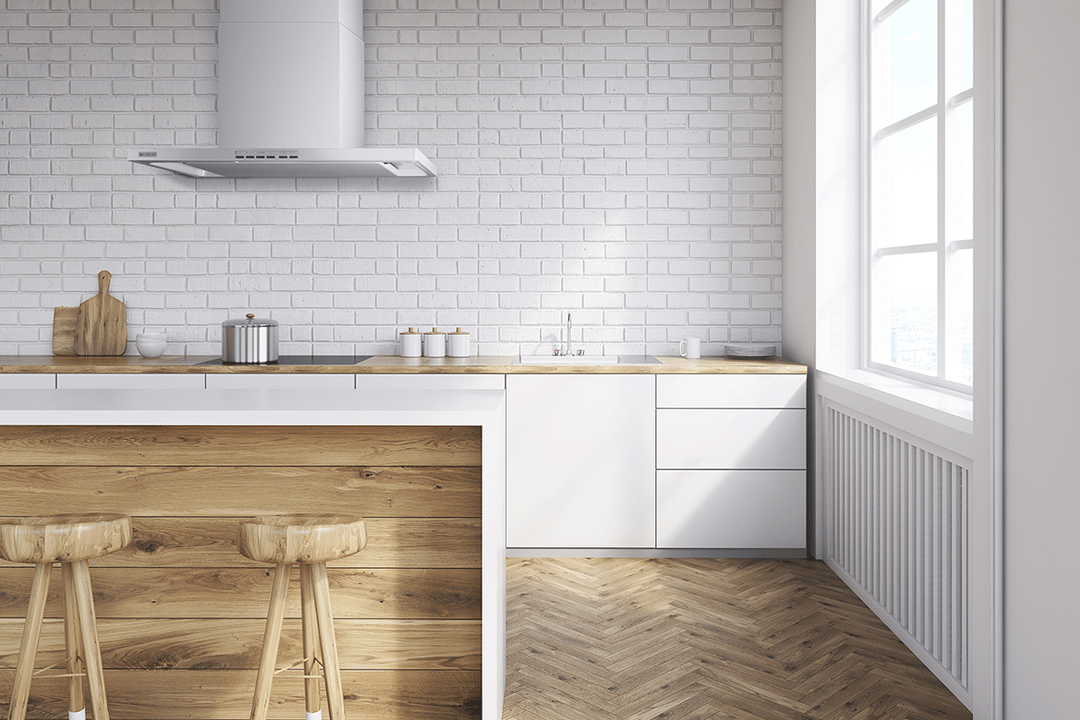 In Singapore, this critical difference determines which type of hood that you'll be purchasing for your home. High-rise HDB apartments do not allow ventilating models, simply because unfiltered fumes will inevitably end up entering neighbouring units.

In any case, there's no need to fret if you are getting the FUJIOH FR-CL1890 – this efficient and flexible hood is available in both configurations.

Request for the 'R' model if you require a recirculating hood for you HDB home, or the 'V' model if a ventilating hood is what you wish for your private house.

Getting this deal will also double your chances of winning in the FUJIOH 25th Anniversary Lucky Draw with a grand prize of a pair of travel vouchers to Japan (worth $2,500). 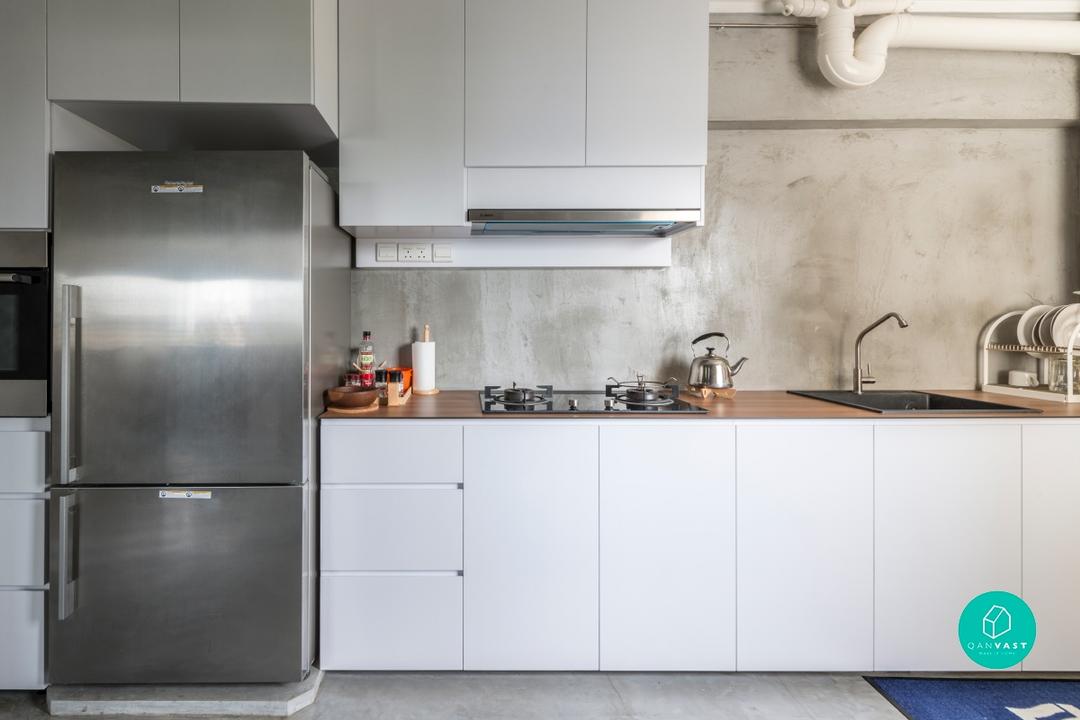 GUIDE
Up or Down: Which Kitchen Hood Is Best For Your Home?
Learn more about the different types of kitchen hoods and find out how they can help to keep your kitchen smelling fresh 24/7. 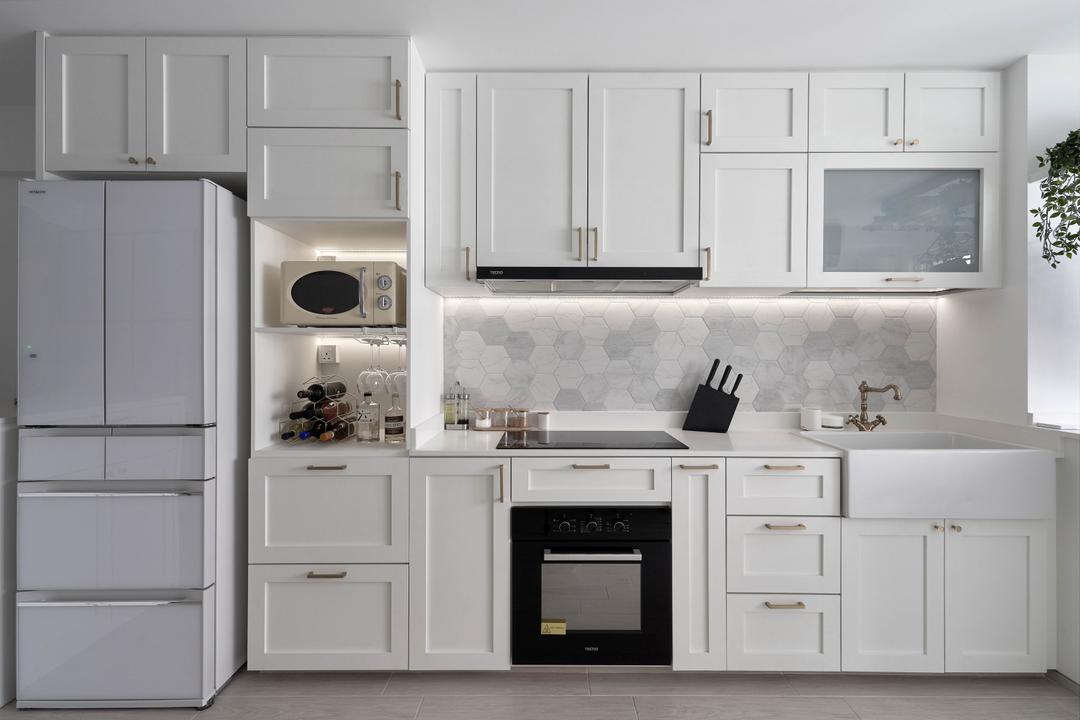 GUIDE
Which Kitchen Countertop Material Should You Pick?
If the kitchen is the busiest place in your home, the counter is probably its most hardworking surface. Discover your countertop material of choice from these 6 options. 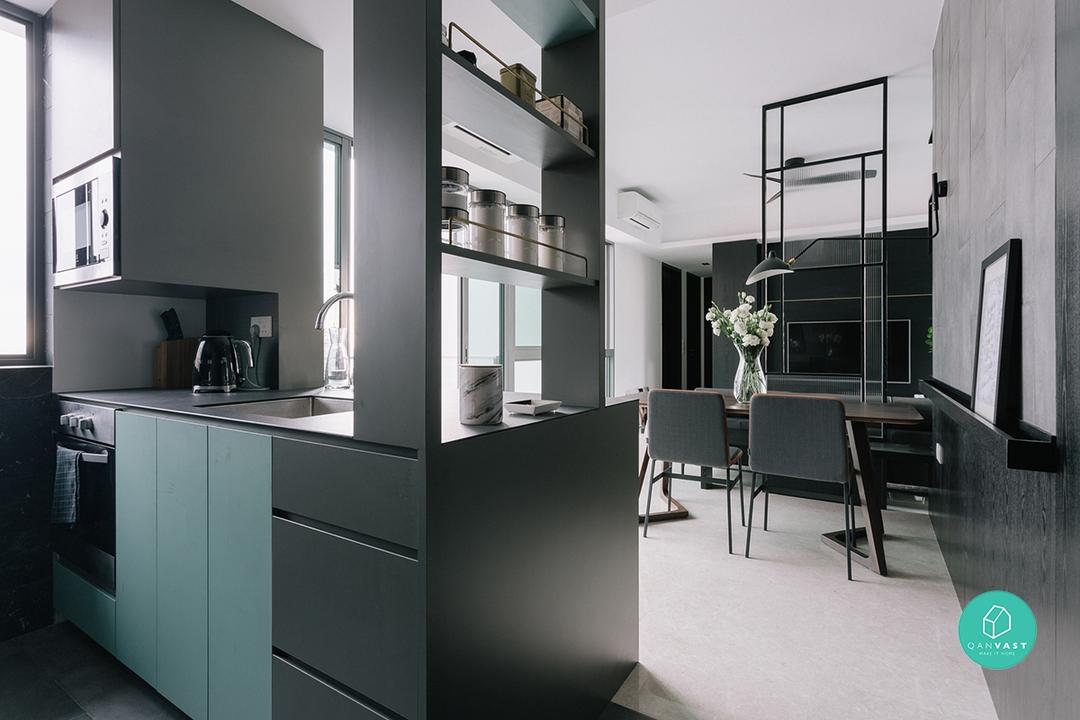 PRODUCT REVIEWS
Buying A Sink? 5 Secrets Shops Won't Tell You
From the dirty to dangerous, these 5 hidden sink issues can damage your kitchen - and health! Find out what they are, and why iQuartz's revolutionary Hachi Sink is the answer to all your kitchen sink woes.
Preparing the next article…
Recommended for you