Built for comfort and good rest, this couple’s nest has all the trappings of a simple, relaxing home.

After a renovation that was delayed for nearly 5 months, Sen Kiat and Jerlin (@aloft.1352) were finally able to collect the keys to their minimalist 4-room Bidadari Park Drive BTO flat in mid-October last year.

“The original completion deadline was supposed to be last May, and we thought that we’d be able to move in before our wedding in November. But due to COVID-19 and the Circuit Breaker, everything got delayed,” says Sen Kiat about the longer-than-usual renovation. “Thankfully, the wait was worth it.” 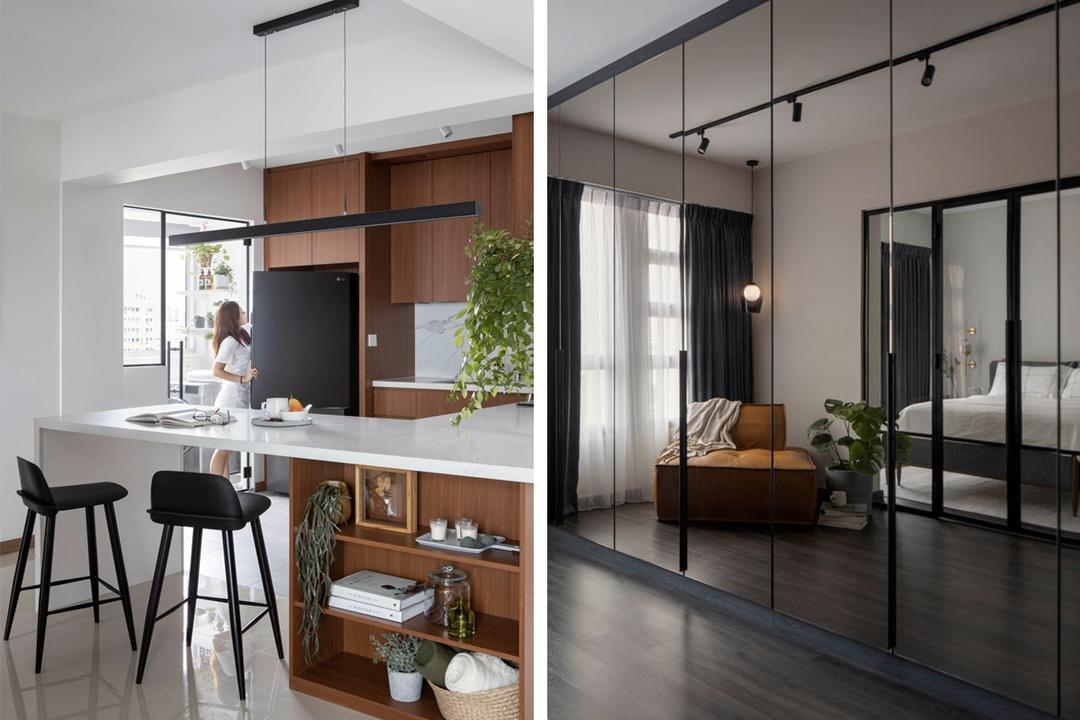 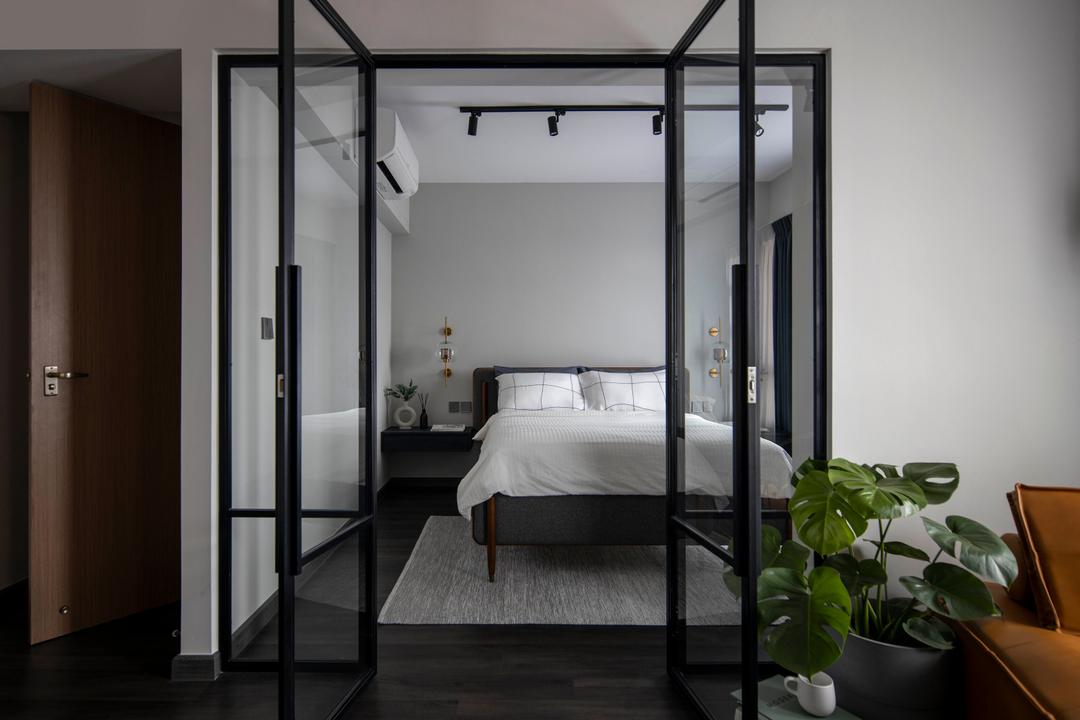 Having lived in their BTO flat for nearly half a year, it has proven to be the perfect nest for the couple thus far, especially with its new features, which consist of an open-concept kitchen/yard as well as a bedroom ‘suite’ that was created by merging two rooms together.

To find out more about Sen Kiat and Jerlin’s renovation, we got them to share about their experience as first-time homeowners well as how Authors • Interior & Styling brought their sleek, but cosy flat to life.

Sen Kiat (SK): Both Jerlin and I are a newly-married couple, it’s only just the two of us living here. We’re both outgoing people who enjoy living in the moment as well, so in that sense our home was designed for our current lifestyle as a couple, rather than for family life. 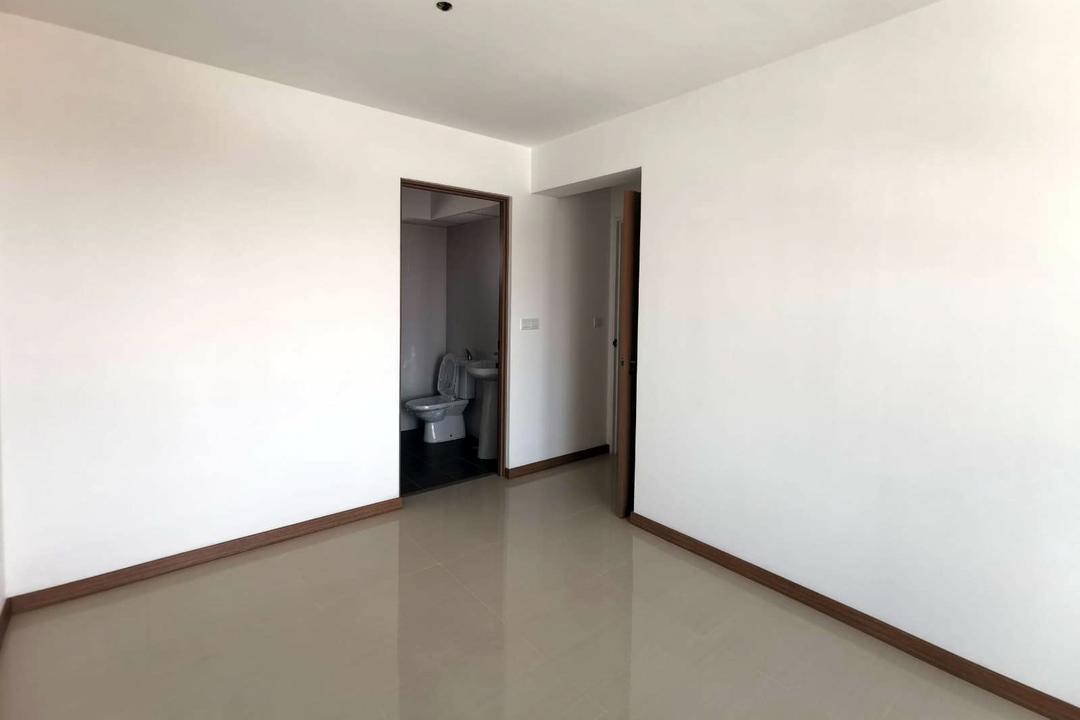 The master bedroom prior to the renovation with its partition wall intact.

When we first got the flat, it was like any brand-new BTO unit, there was nothing on the inside, basically it’s a blank slate.

One of our requests for Authors was to create a boutique hotel suite-kind of layout where there’s a single passageway leading into a sleeping space, bathroom and changing area; they accomplished this by merging the master bedroom with the bedroom beside it to create a larger ‘suite’. 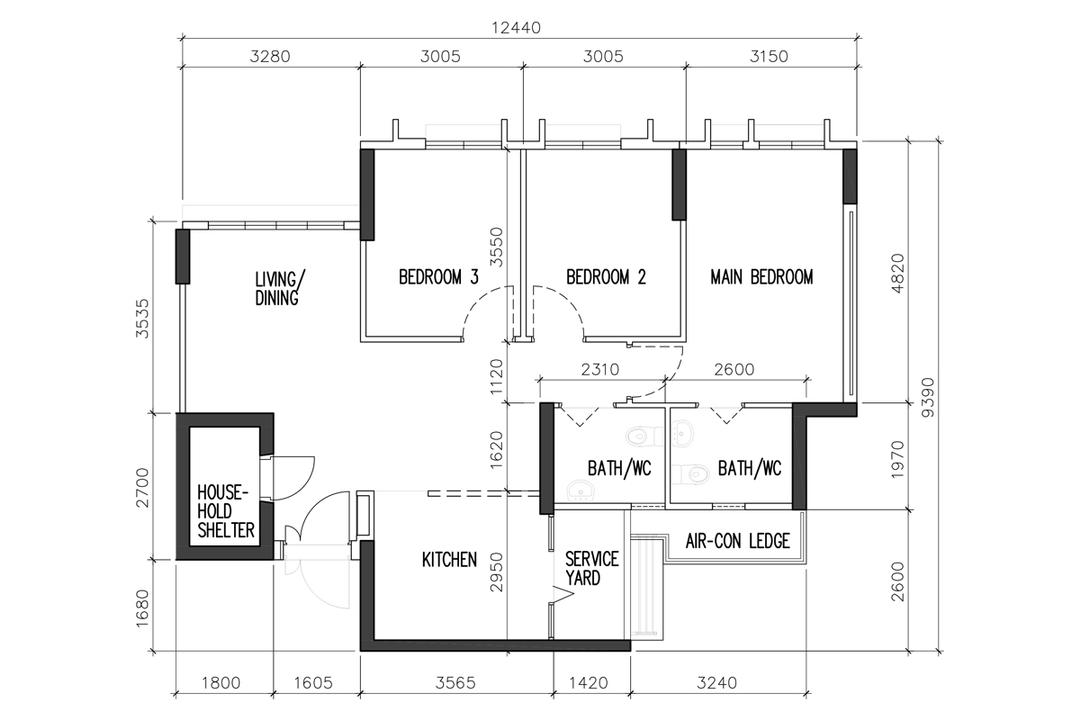 The original floor plan of Sen Kiat and Jerlin’s home. 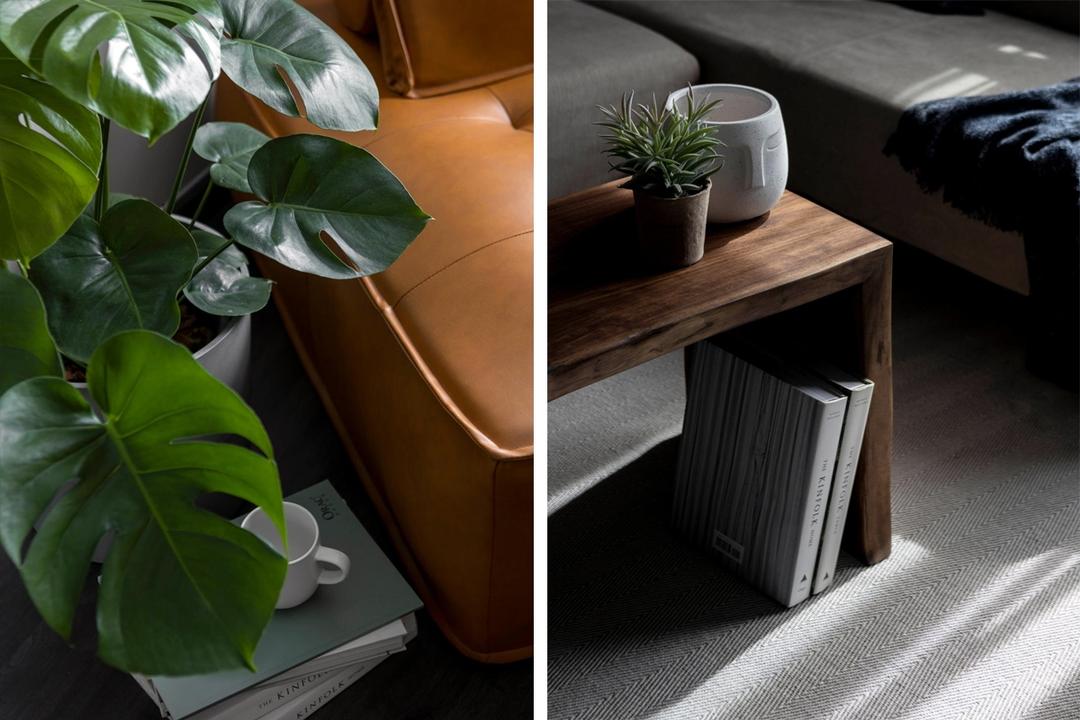 Jerlin (J): We also wanted a more natural vibe [for our flat], which is why there are design elements like wood and marble accents throughout the house. Green is a favourite colour of ours, so we brought in some plants and had the living room painted green as well. 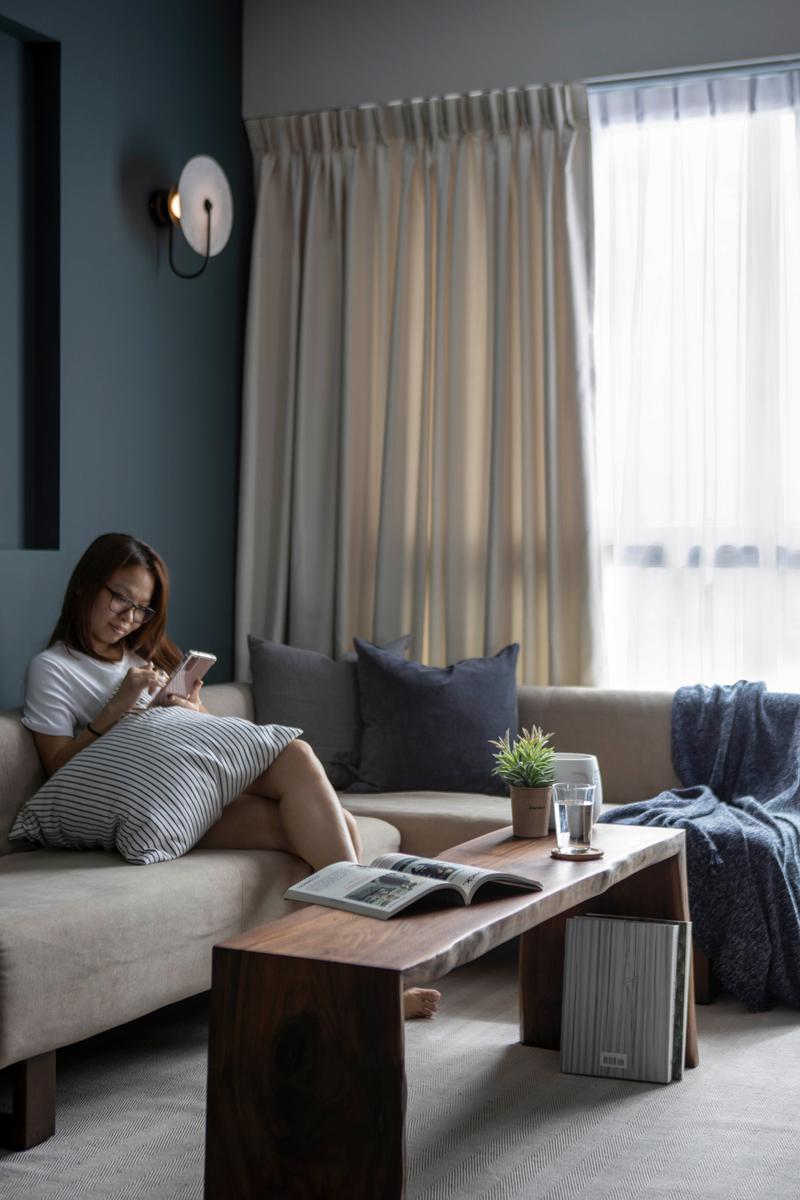 SK: The living room is actually quite small, I’d say that the maximum number of people it can fit at any one time is 6 to 7, but still we wanted it to be an inviting space for our guests. We were very careful about our furniture choices for this reason.

The coffee table is actually a bench from Grey and Sanders that we use as an extra seat when there’s more people around and the sofa is an L-shaped model that’s fairly large. Initially, we thought about getting just a three-seater sofa to prevent the space from getting overcrowded, but that would just make it harder for us to laze around in the living room (laughs). 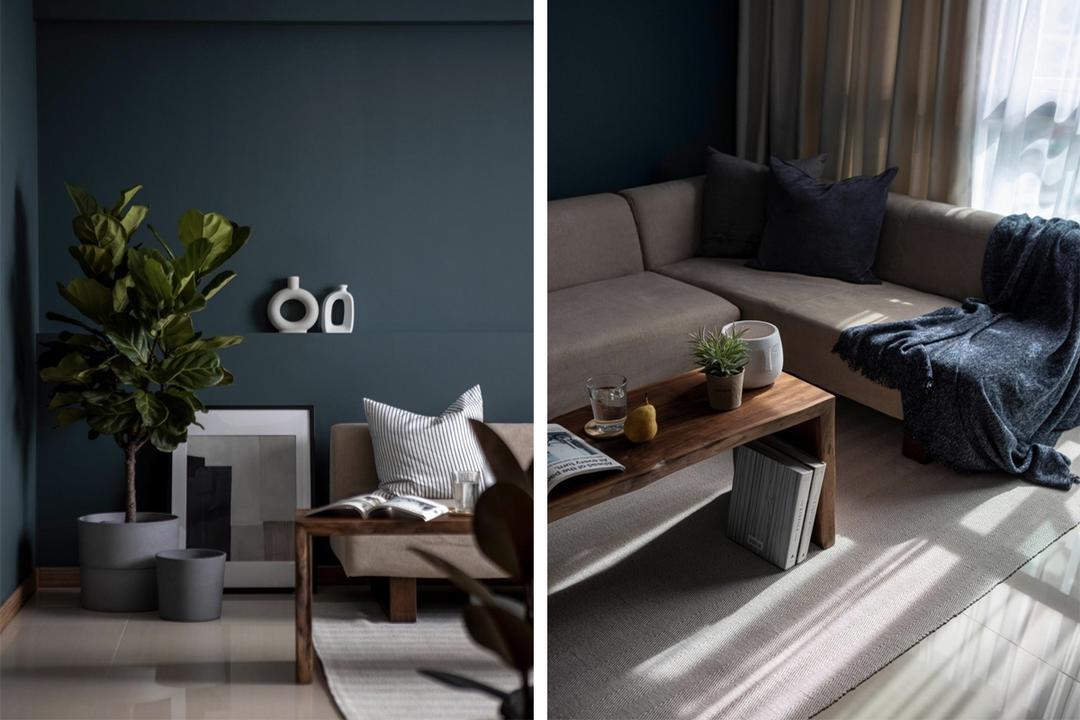 J: There isn’t a personal style that defines our home. We’d just go along with whatever catches our eye, like for example, the shade of green used in the living room.

We first saw it while browsing Authors’ projects on Qanvast. There was a home with similar features – dark tans, natural elements and marble accents – that we took a liking to, and that’s what steered us towards the current look of our flat. 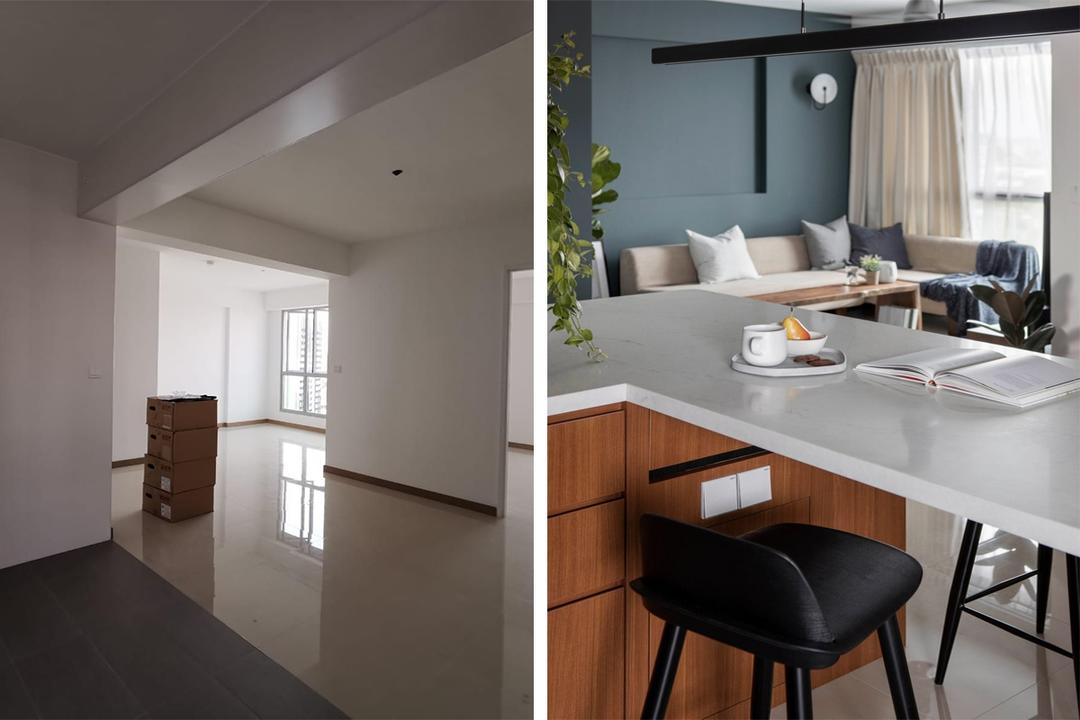 The living room, before (left) and after (right) the renovation.

The half-wall display ledge at the back of the living room is another new feature; we asked for one because there was an empty recess originally, and it would look really awkward if we left it alone. I guess we could have filled the recess up with the sofa, but that’s sort of like fitting the wrong piece into a jigsaw puzzle because it wouldn’t be a perfect fit. 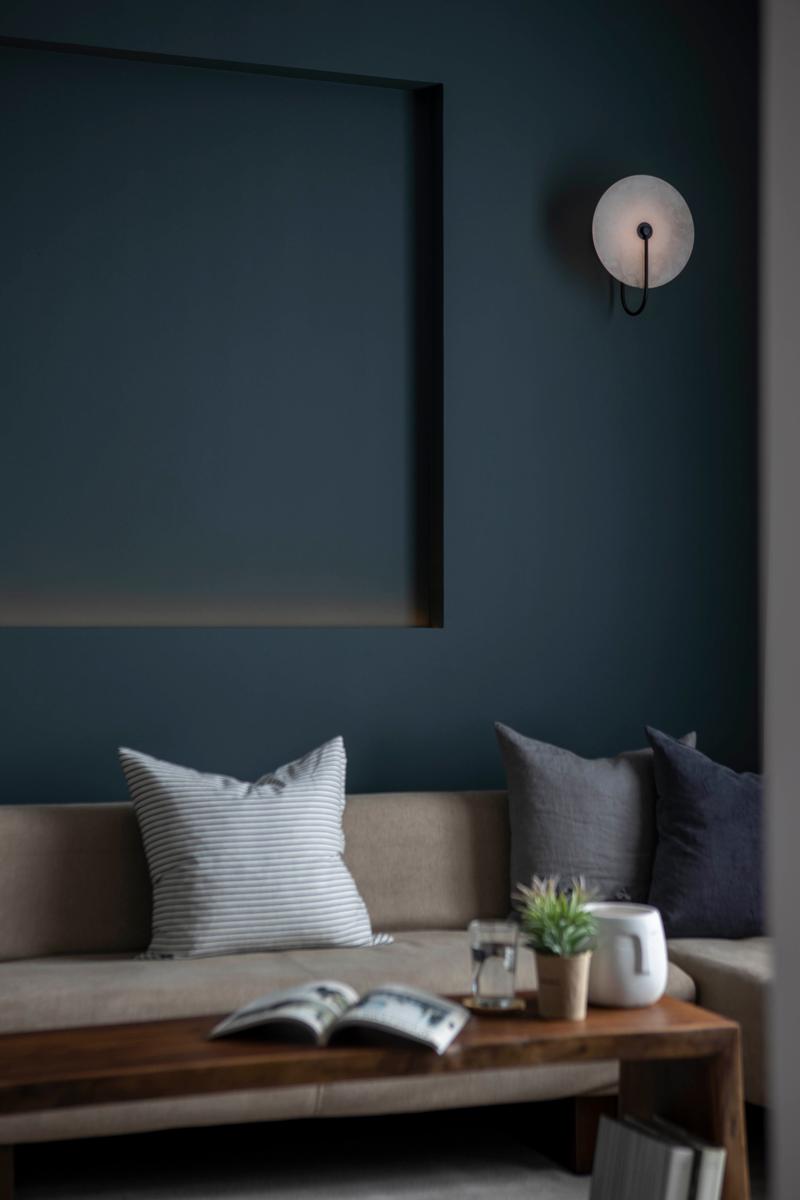 On the kitchen’s renovation 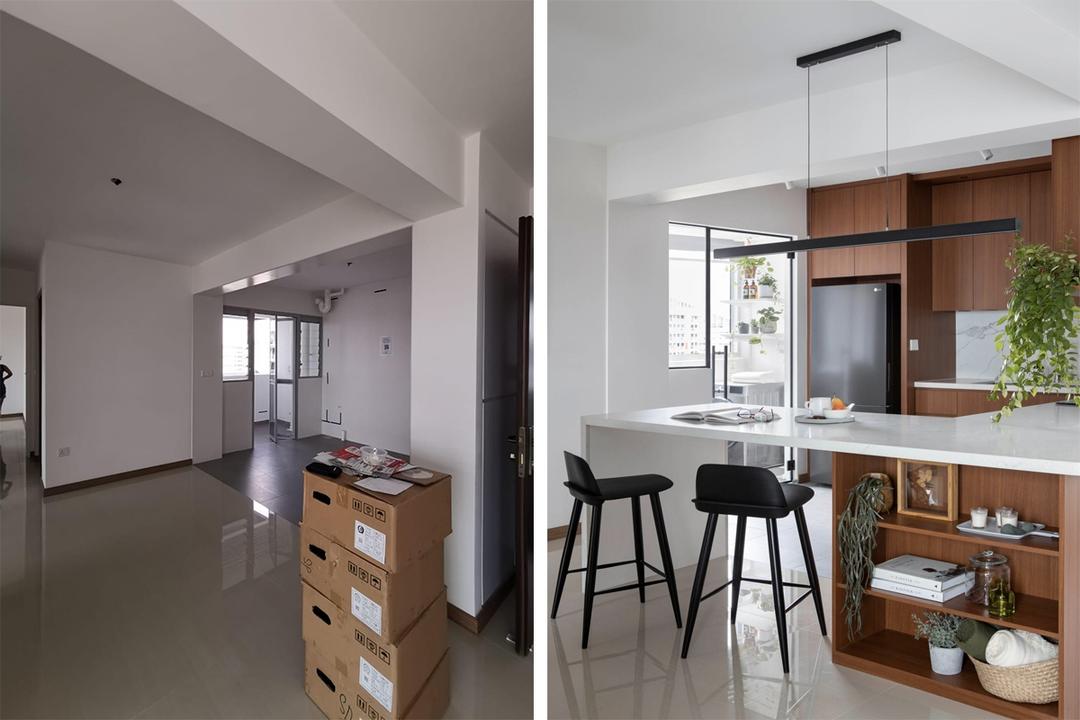 The kitchen, before (left) and after (right) the renovation.

SK: I’d say that we’re quite proud of our kitchen; it's the area that drew the most attention from our family and friends.

From the start, we wanted an open kitchen because we don't cook often. We came up with the idea of the U-shaped layout because the DB box is housed in an entryway recess near where our hob now is. The DB box couldn’t be shifted, so we thought – why not utilise the whole stretch of space by building a breakfast counter instead? 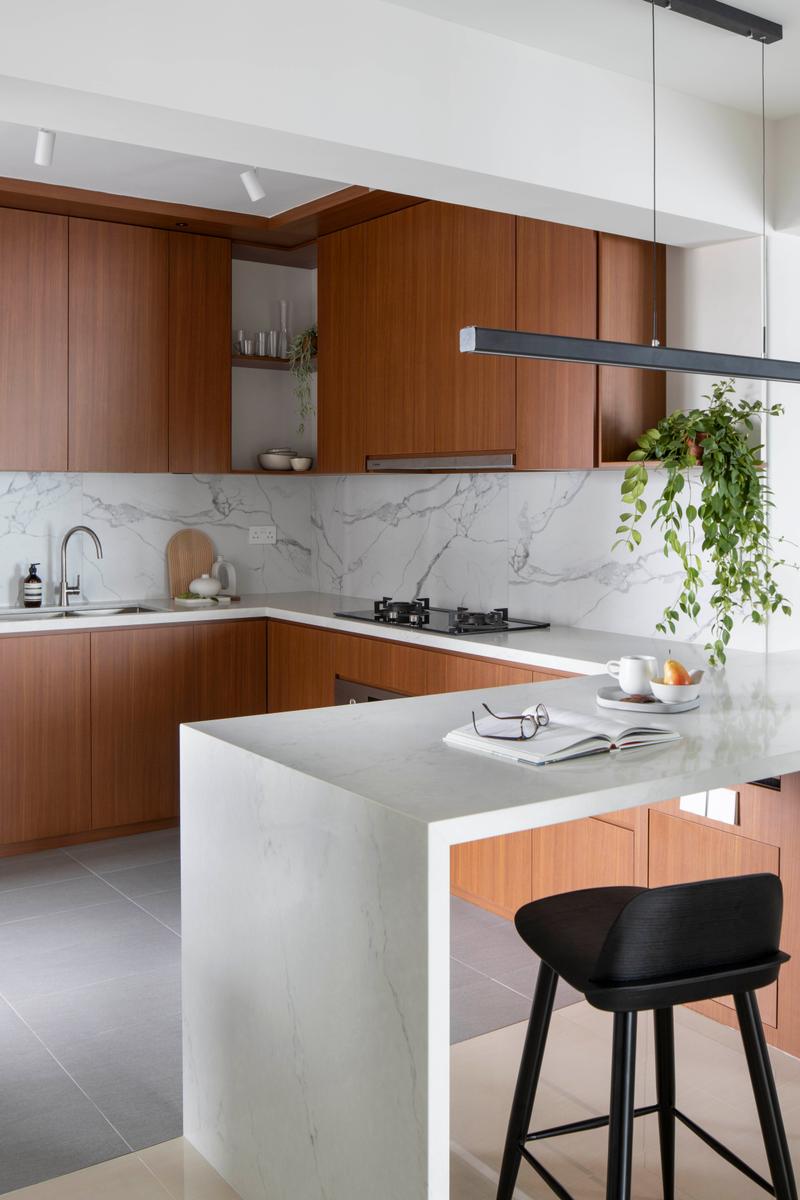 J: Apart from maximising the kitchen, having this U-shaped layout and the breakfast counter also saves us space because we don’t need an additional dining area. Plus, we’re able to do our work at the counter here as well.

As a matter of fact, we got used to this seating arrangement because we used to visit the Starbucks at East Coast all the time to discuss our renovation ideas – that’s when we realised the ‘high chair’ café set-up was suitable for this part of our home. 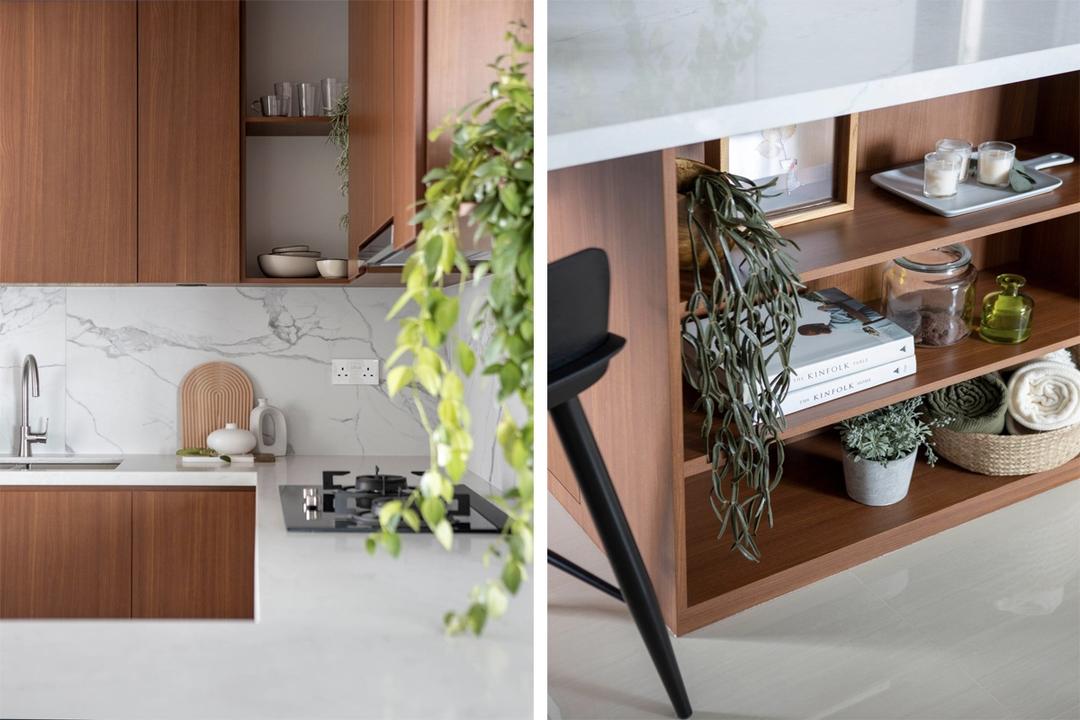 In addition to practical fixtures, like a marble tile backsplash and custom cabinetry, the kitchen also features a handy ornament shelf at the bottom of its breakfast counter.

About the common bathroom’s new look 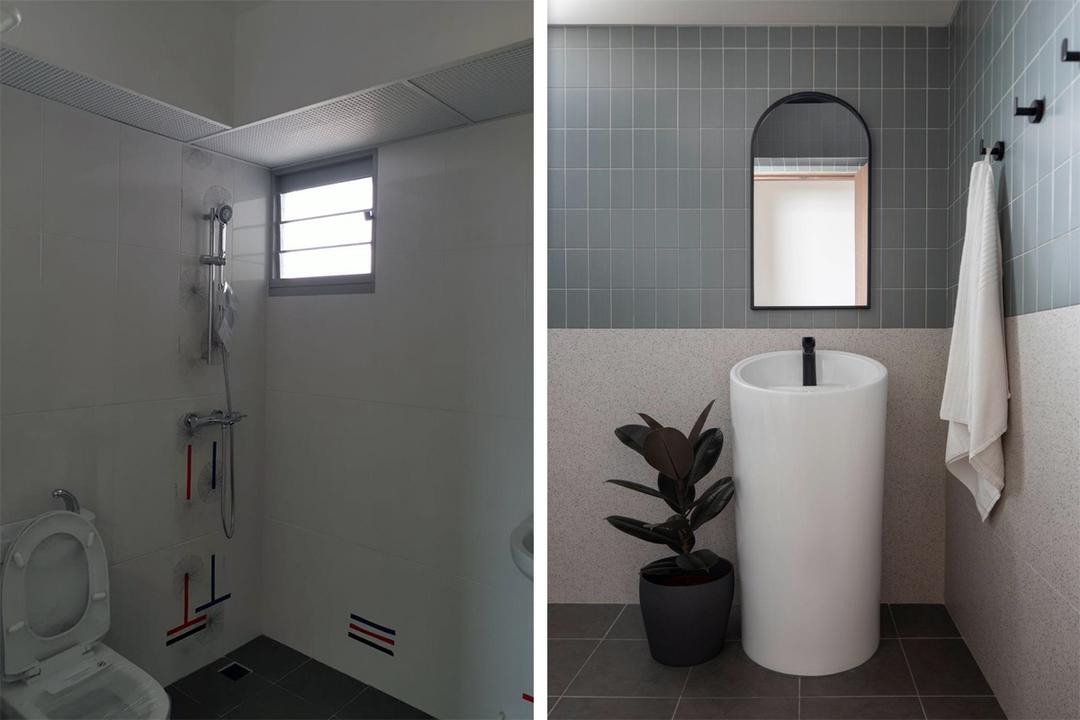 The common bathroom, before (left) and after (right) the renovation.

SK: I’m not 100% certain, but both our common bathroom and master en suite are larger than those in other 4-room HDB flats we’ve seen. My mom’s flat has the same layout as ours, but the bathrooms in her home seem a lot smaller.

The extra space comes in handy especially when we’re washing our hamsters’ cages. Also, we didn’t build a shower screen here, because our common bathroom is meant to be an entire wet area. Because of this, we also traded the usual wood cabinets for a standalone sink that’s quite stylish. 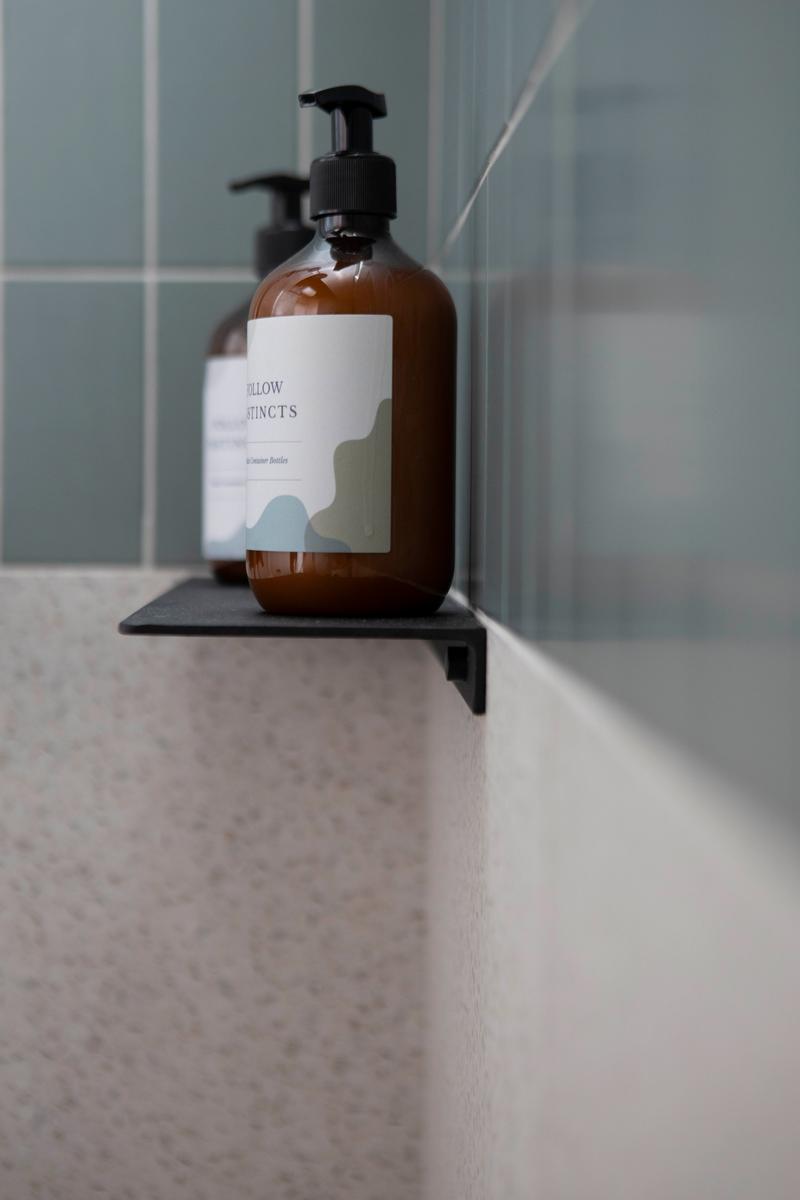 J: For the common bathroom tiles, we went for a half-and-half treatment with a vertical lay of green subway tiles and off-white terrazzo pieces.

We thought the contrast would look nice, so we looked for a cost-effective way to create it because real terrazzo costs a bomb. Luckily, we were able to find large format terrazzo lookalikes, which look great because there are very few visible grouts.

About renovating the master bedroom and en suite 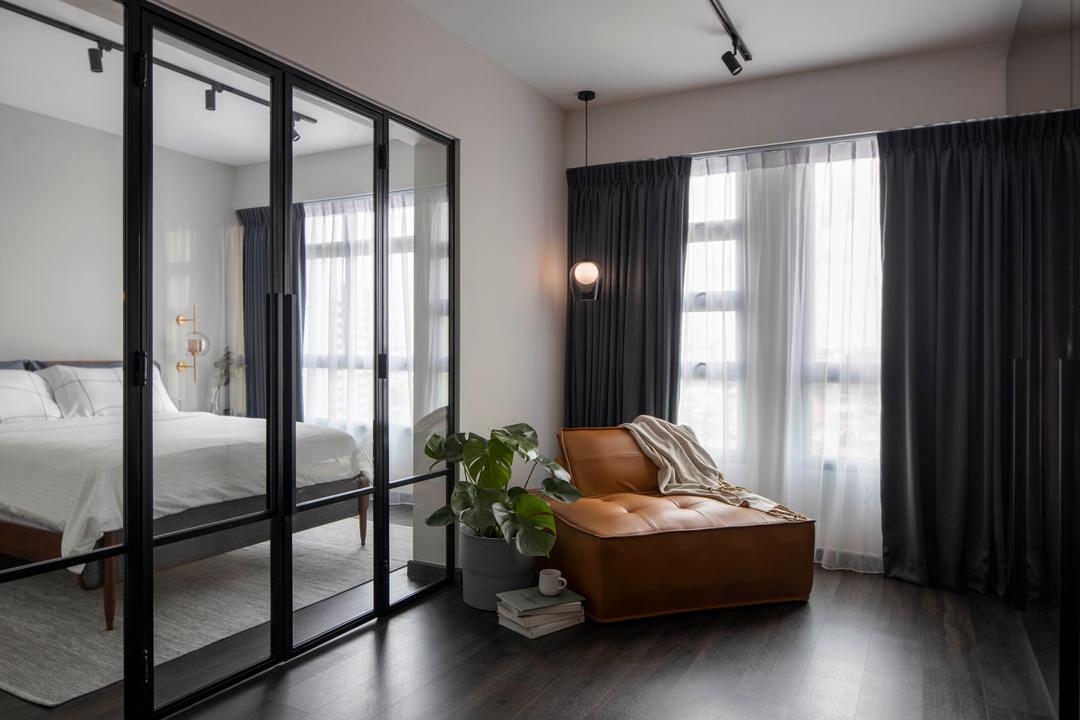 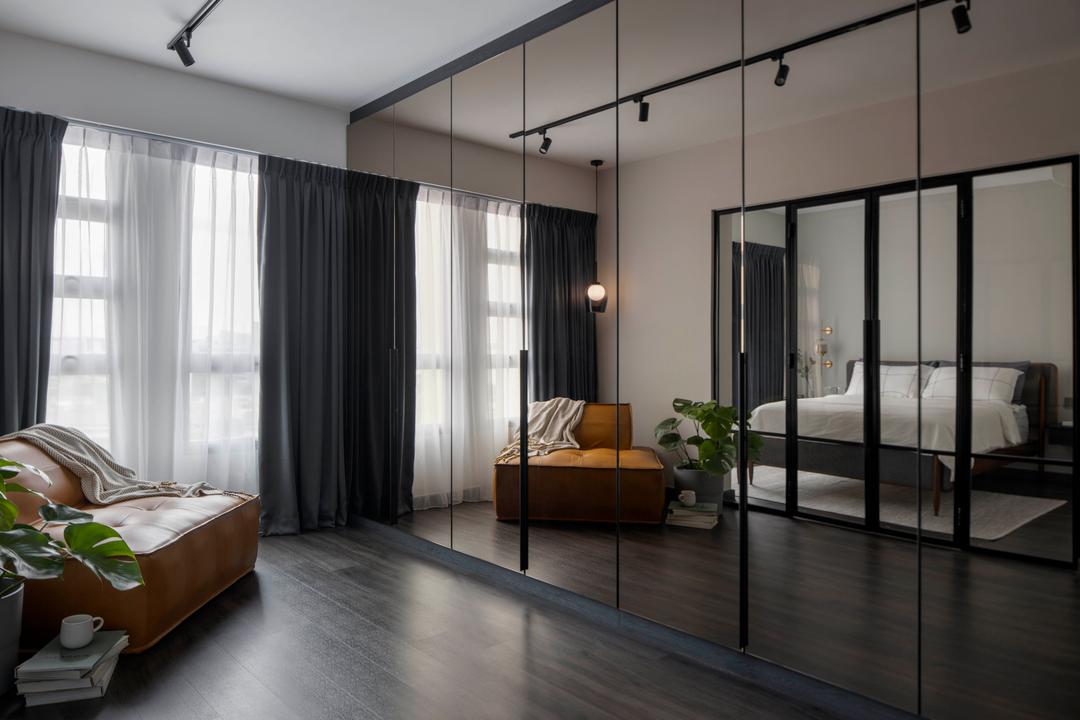 For a classier vibe, tinted mirrors were used for the walk-in closet’s wardrobe doors whereas a leather couch at the side makes for a cosy reading corner.

SK: Our wish to have a hotel-suite like layout was what prompted us to merge the existing master bedroom with the smaller one beside it. The wall separating them was demolished, then a pair of French doors was installed as a see-through partition between the sleeping area and the walk-in wardrobe, which was the original master bedroom.

We also had the door to the smaller bedroom sealed up for two reasons – one was to allow us to have a larger bed without worrying about the door’s opening radius, and second to preserve the hotel vibe, because with a second entrance, the space wouldn’t look right. 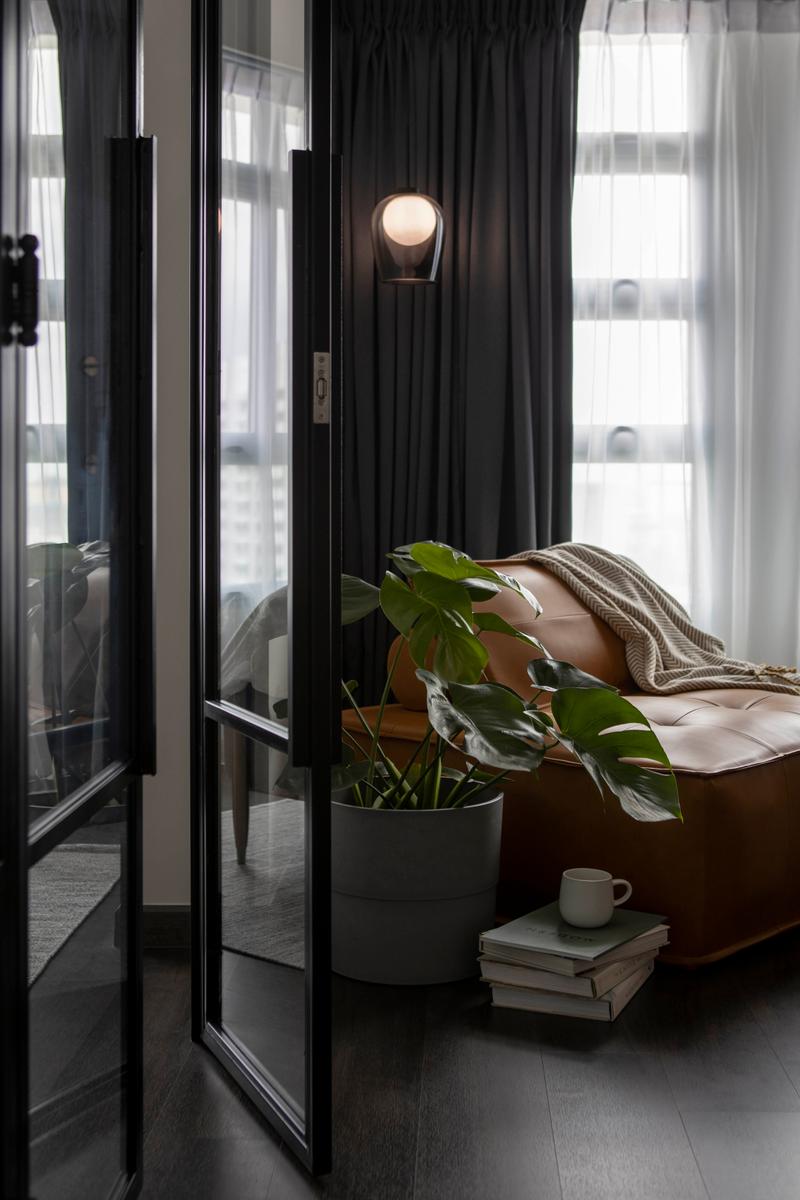 Getting the French doors right was also quite challenging and they underwent at least three re-designs.

The doors were initially proposed to have three panes of the same size each, but we opted to have less panes and larger ones at the top – that was the first time the design [of the doors] was changed. The second time was when we found that the metal grilles were too thick, and the third time was after the design was finalised with a sleeker frame. 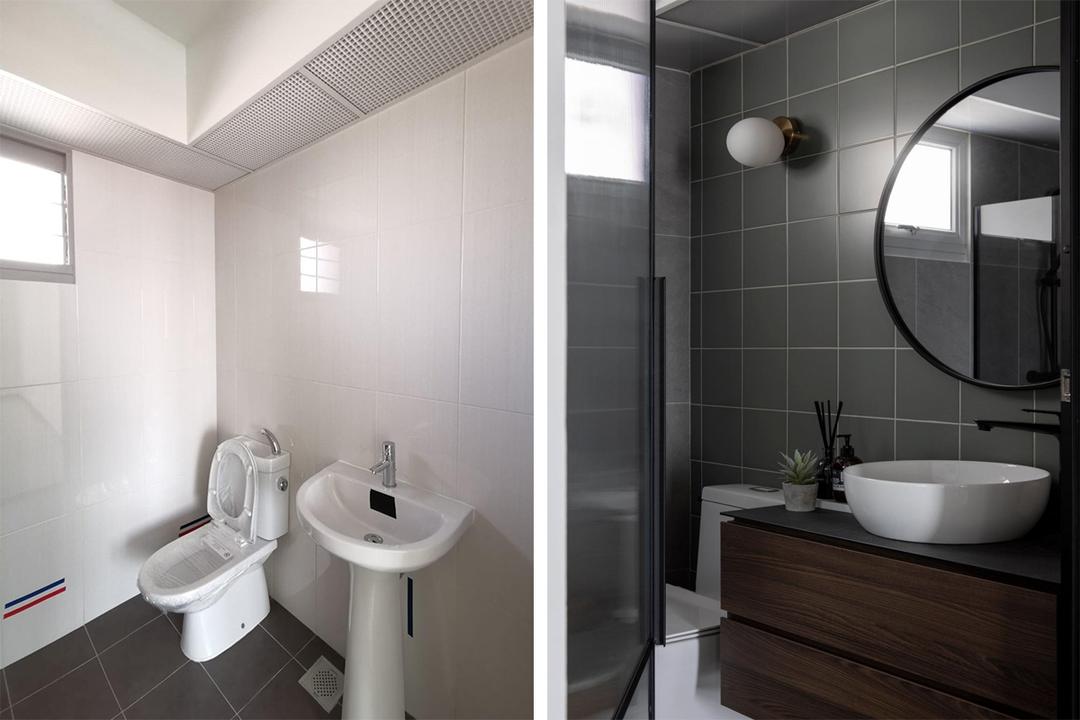 The master en suite, before (left) and after (right) the renovation.

J: We visited quite a few stores to find the right tiles for the master en suite wall. In the end, Tayllen, who is our designer from Authors, directed us to RICE at Telok Blangah – we chose these tiles because they’re green but are more muted compared to the living room’s walls.

Additionally, we swapped out the sink and WC that came with the flat as well as the honeycomb mesh for the light box above the sink. Now, there’s an acrylic cut-out that diffuses the warm lighting, which creates a well-lit space, but with less intensity. 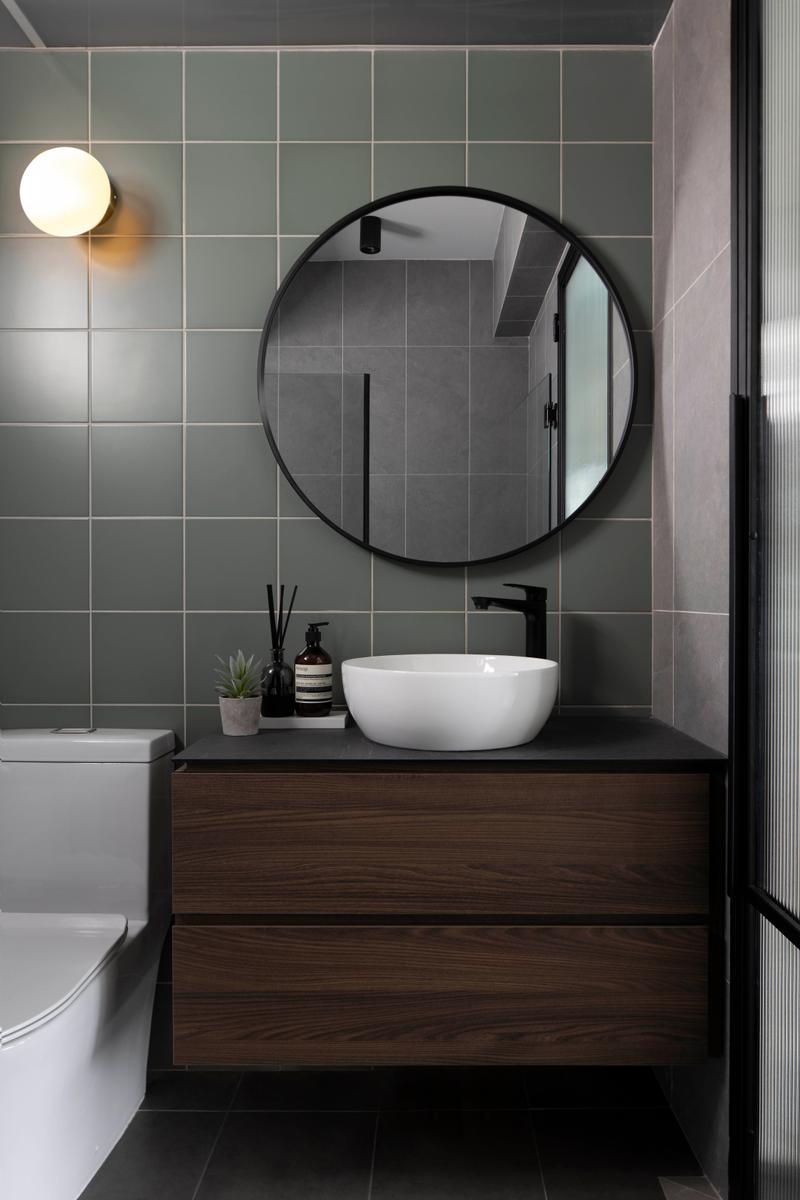 SK: I’d say that the long delay turned out to be a blessing in a strange way, but only because our renovation ended well. Due to the Circuit Breaker, we had more time to discuss our material choices, make design changes, and find out more about things we were unsure about. That, I’d say is the best thing to happen to us amidst a time of uncertainty. 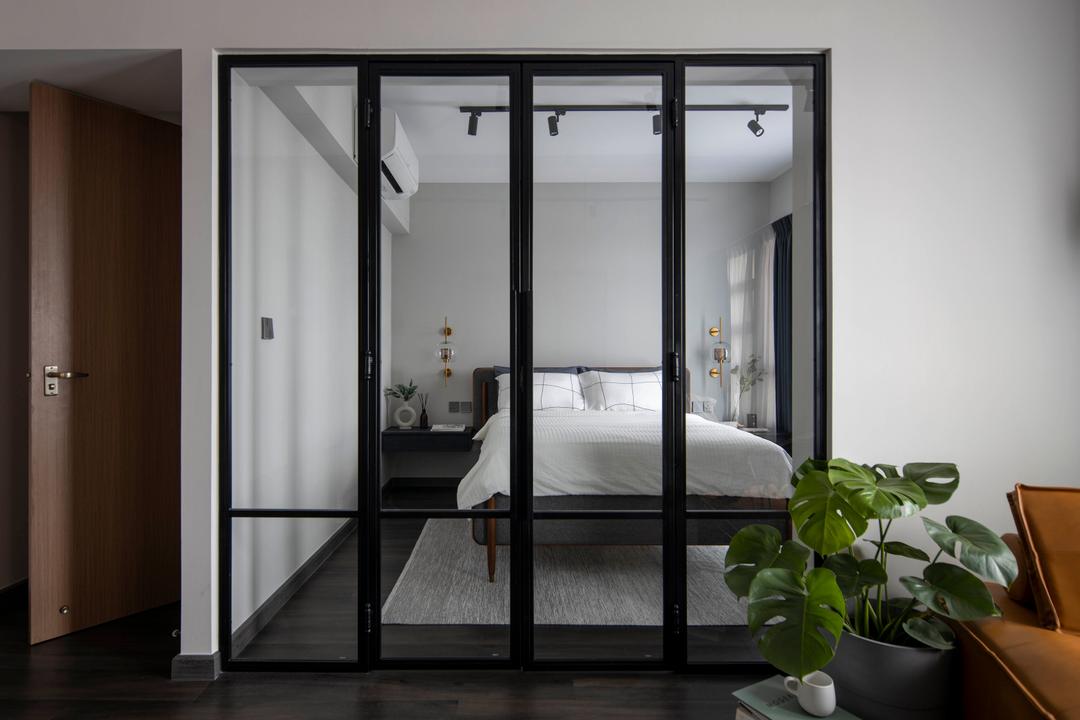 J: I’d also like to say that working with an experienced interior design firm like Authors made the entire process go smoother. Of course, there were plenty of changes to be made along the way, but it’s precisely because we were working with someone reliable that we ended up with a home which we look forward to returning to everyday. At this point, it’s hard for us to leave our flat, even on weekends! 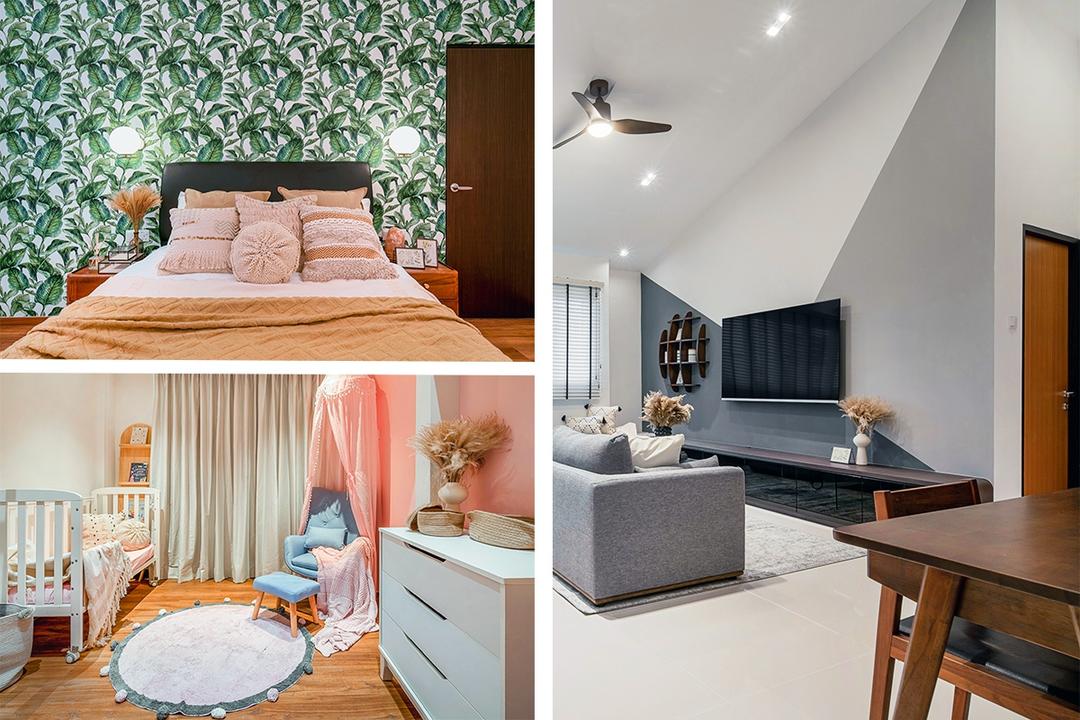 RENOVATION JOURNEY
Rare HDB Flat Has 5.5m ‘Ski Slope’ Roof and IG-Worthy Rooms
Originally built in 1984, this flat in one of Potong Pasir’s ‘ski slope’ HDB blocks was recently renovated for a young family of four. 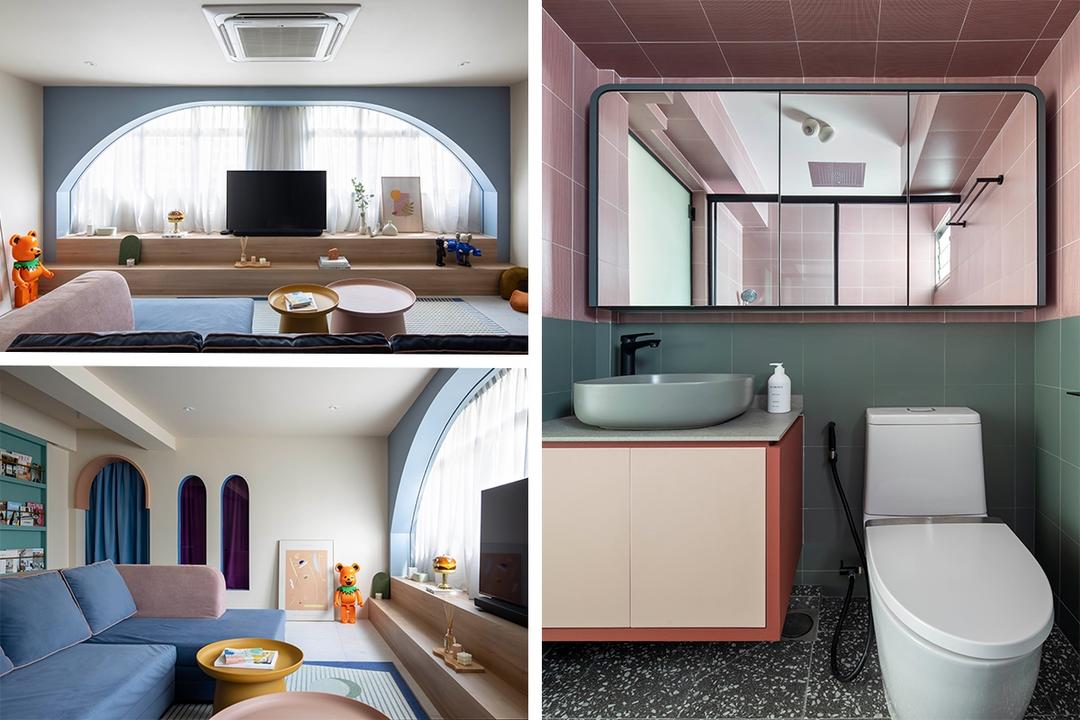 RENOVATION JOURNEY
Wes Anderson-Inspired 4-Room Flat Has XL-Sized Living Area
It's no Grand Budapest Hotel, but this 4-room flat at Matilda Edge is totally Wes Anderson-inspired with its symmetry and saturated colours! 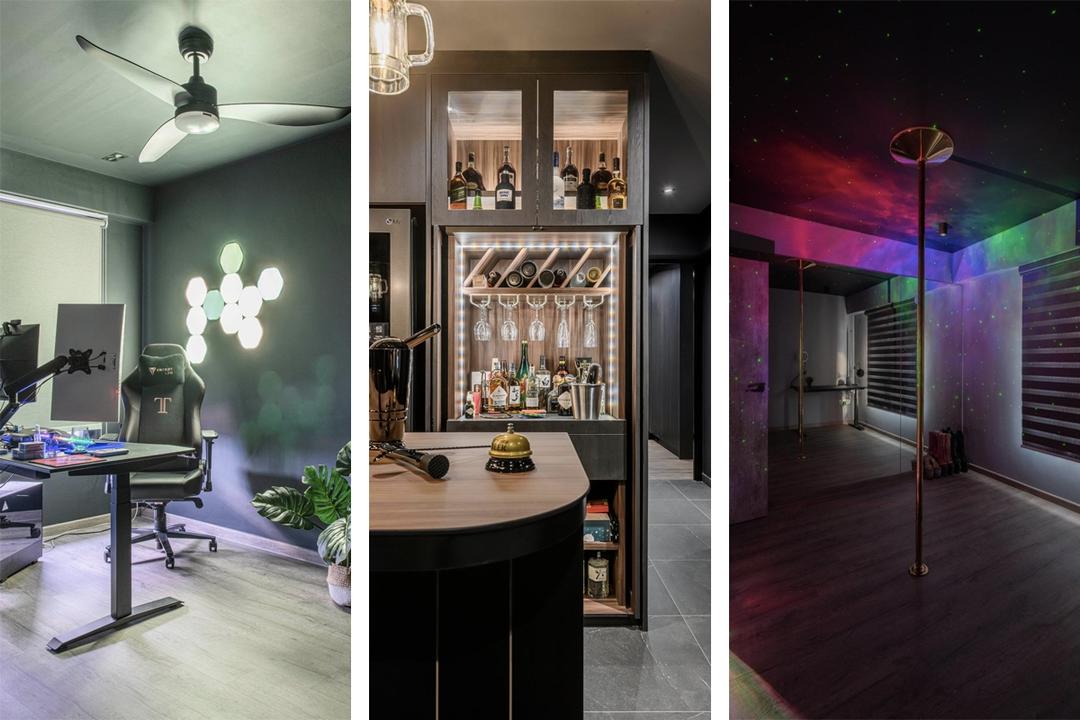 RENOVATION JOURNEY
5-Room Flat Turned Into ‘Siam Diu’ with Bar and Dance Studio
Instead of going for a mainstream theme for their 5-room BTO flat at Northshore Drive, these homeowners renovated it with a 'siam diu' inspired look.
Preparing the next article…
Recommended for you 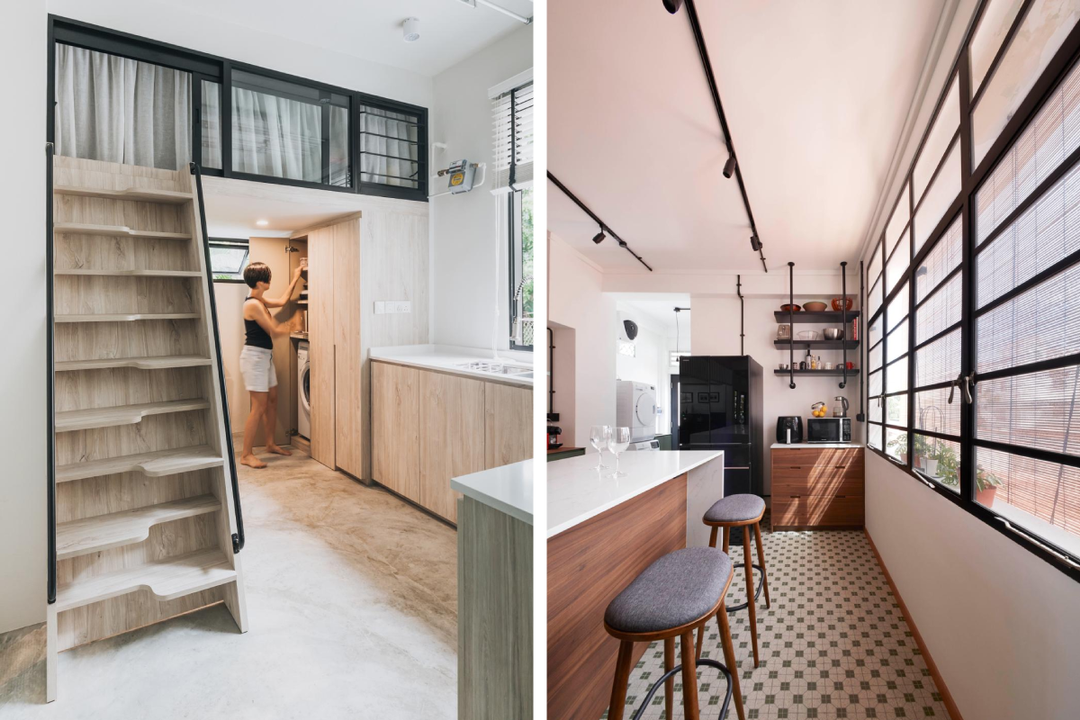