It has everything you’d want in a sunny, open-concept HDB flat.

Though a regular, squarish layout is one of the (many) positives of this 112 sqm 5-room flat that’s located in Telok Blangah, it wasn’t the main reason why its current owners – a couple in their late twenties – purchased it back in 2020. 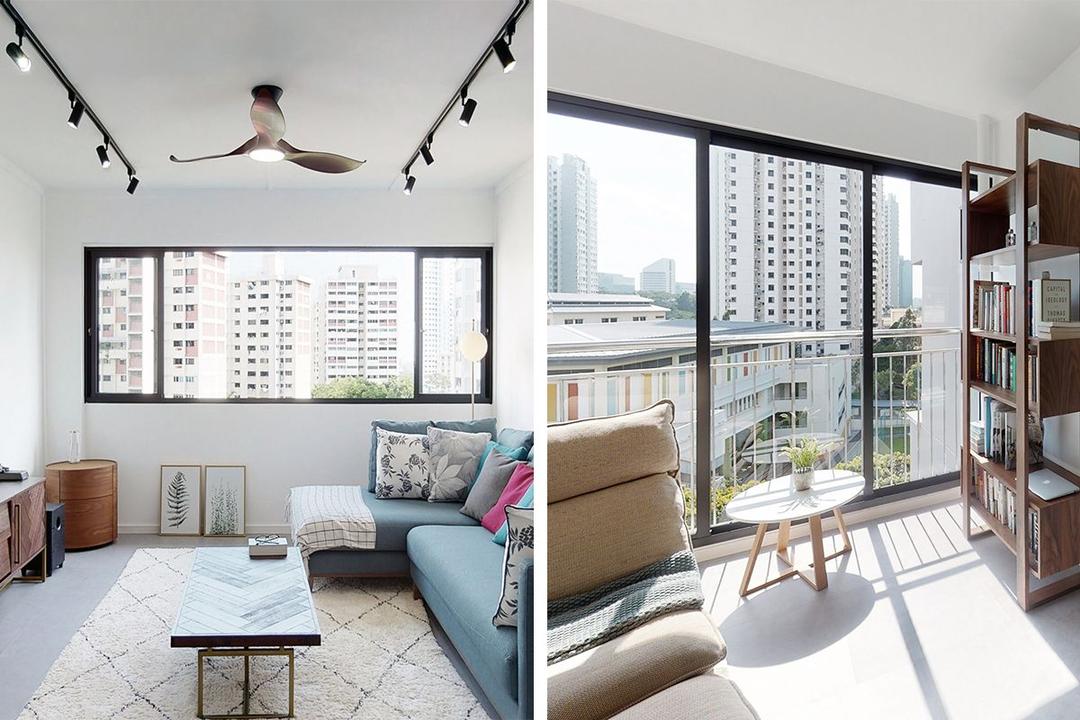 “If I recall correctly, they wanted it because it’s pretty near to their parents’ home, which is just two blocks away,” says Stylemyspace interior designer Brian, who was responsible for the flat’s makeover.

“But the layout and size of the flat definitely helped with the renovation because it made space planning simple; there were very few awkward spots that had to be worked around.” 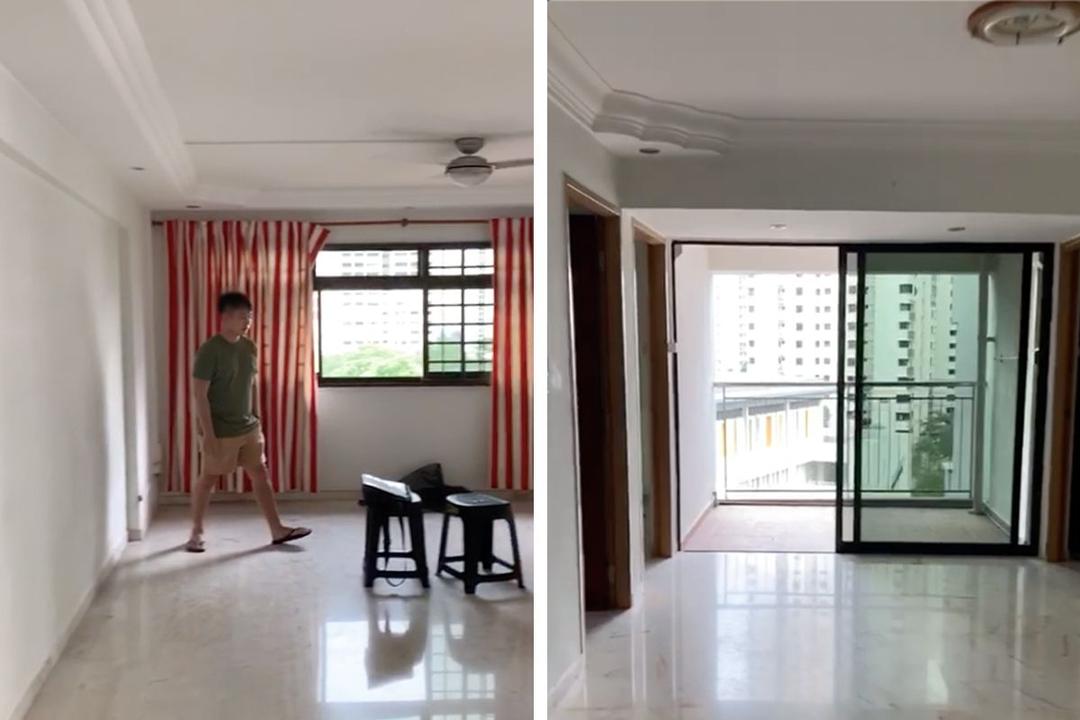 The living room (right) and balcony (left) before the renovation. 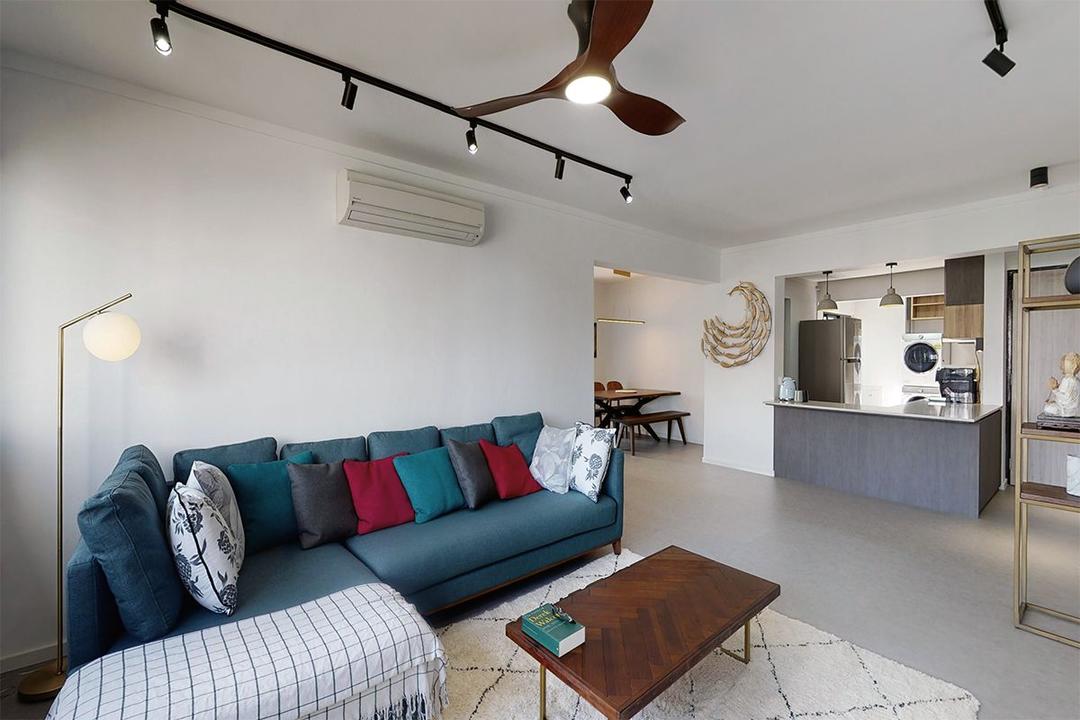 View this project by Stylemyspace

These innate factors also made it easier for Stylemyspace to cut down on space wastage as well as maximise available room – both necessary steps to achieve the flat’s open, airy look. Here, Brian shares more about the entire renovation process, which took eight weeks to complete. 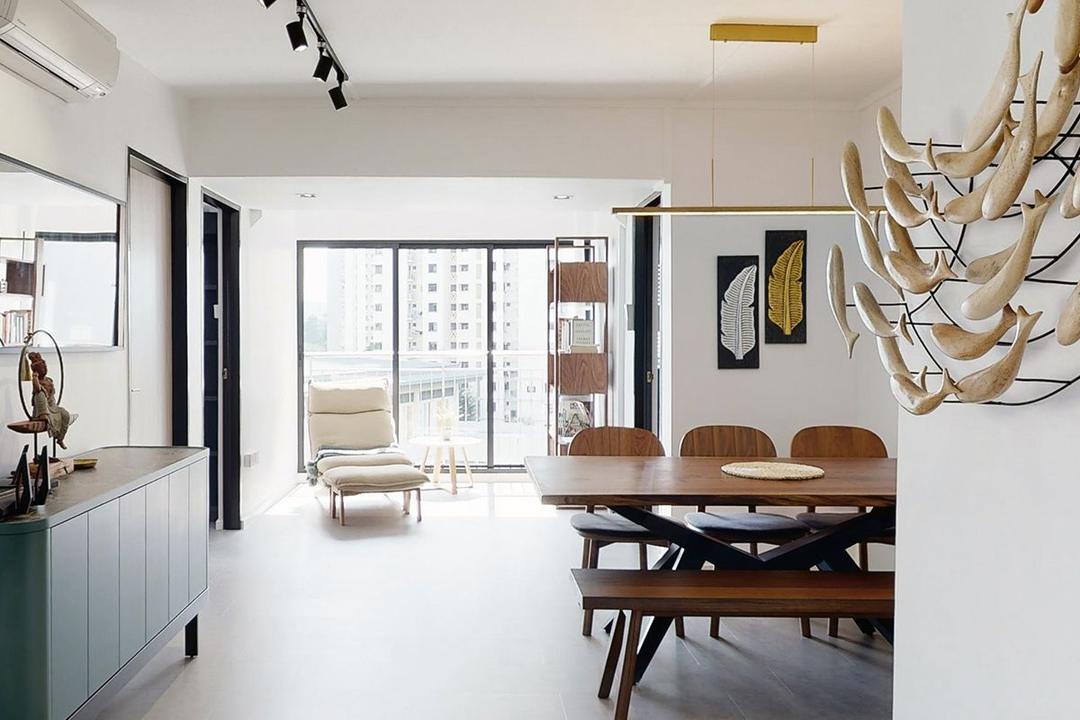 Brian (B): When the owners took over the flat, it was already about 20 years-old, 24 to be exact. My first impression was that this house had good bones; it had potential because of its squarish layout.

Unlike most young couples, the owners were keen to keep the features of the house intact, like for example, they didn’t want to hack the walls to merge the bedrooms. Even for the floor, it was just overlaid with vinyl. The original marble flooring is hidden beneath and still in very good condition. 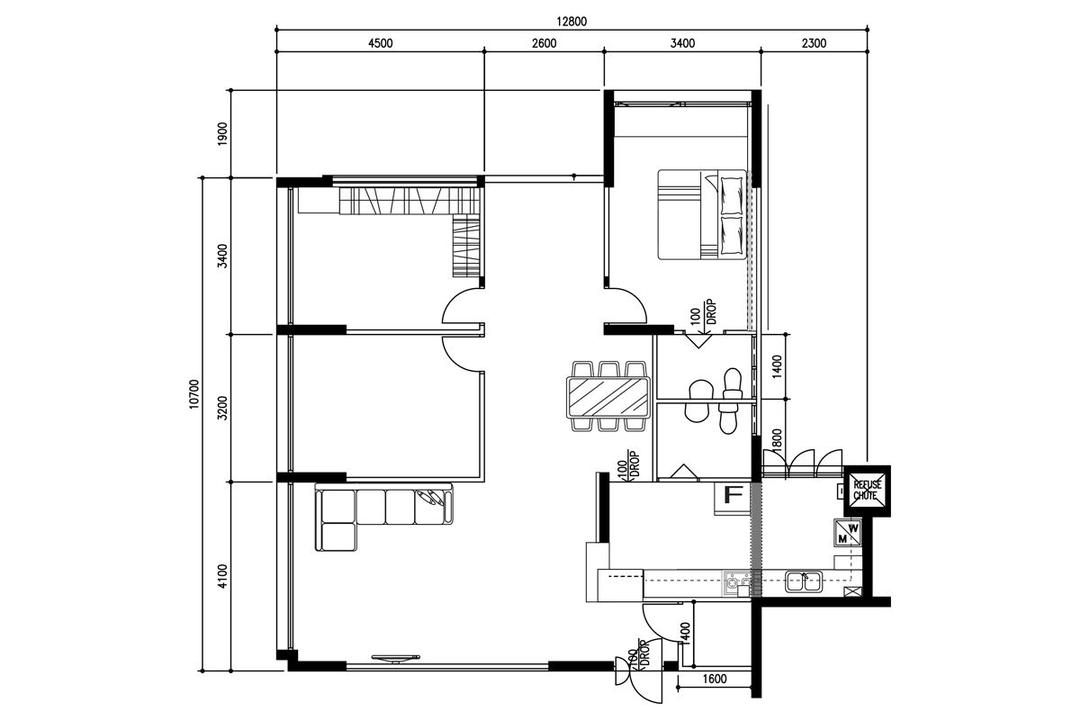 The home’s floor plan after the renovation.

The only minor challenge, if you’d consider it one, was that the flat was scheduled to be upgraded as part of HDB’s Housing Improvement Program (HIP) shortly before the renovation started.

We decided to value-add to our service and offered to help the homeowners to coordinate the HIP works, specifically tiling for the bathrooms because they wanted to use their own tiles. Surprisingly, the HDB officers were okay with this arrangement, and the homeowners only had to fork out a little extra for tiling works.

B: To ensure that changes to the home’s layout can be made easily in the future, most of the furnishings found in areas outside of the bedroom and kitchen are loose pieces. That includes the entryway as well, where there’s just a bench and a display shelf at the side. 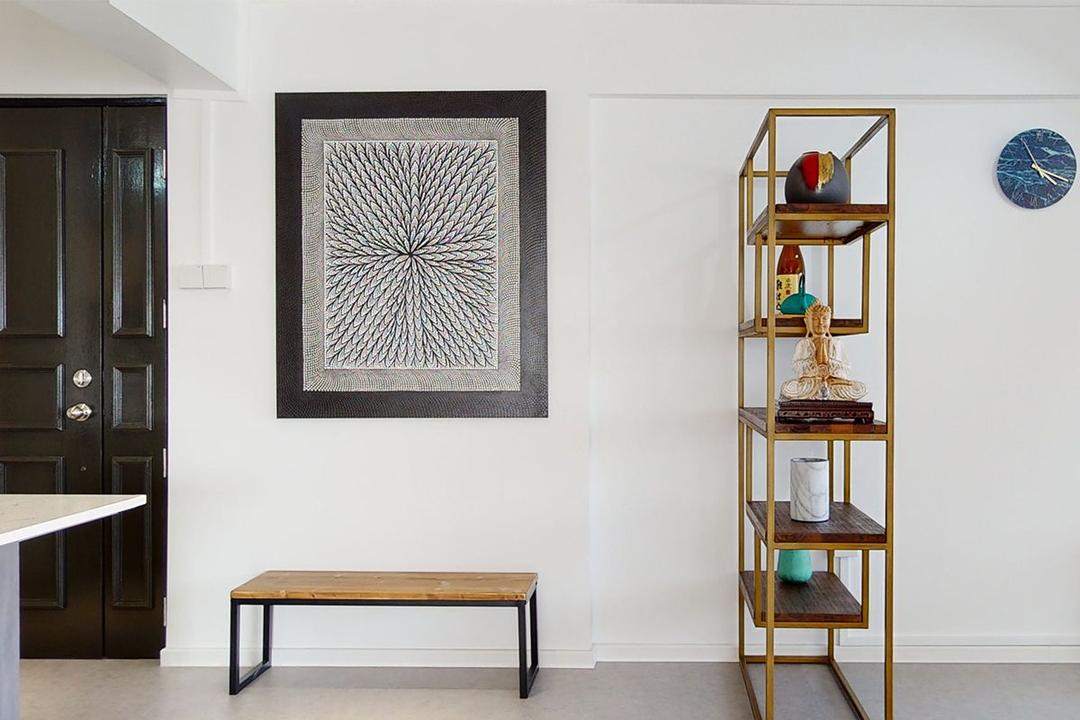 Having carpentry built-ins, like a shoe cabinet, would surely provide more storage space because they can be built all the way up to the ceiling. However, such tall storage fixtures weren’t needed here because the house already has an existing storeroom right next to the kitchen; we kept it intact because building a new one elsewhere would change the current layout. 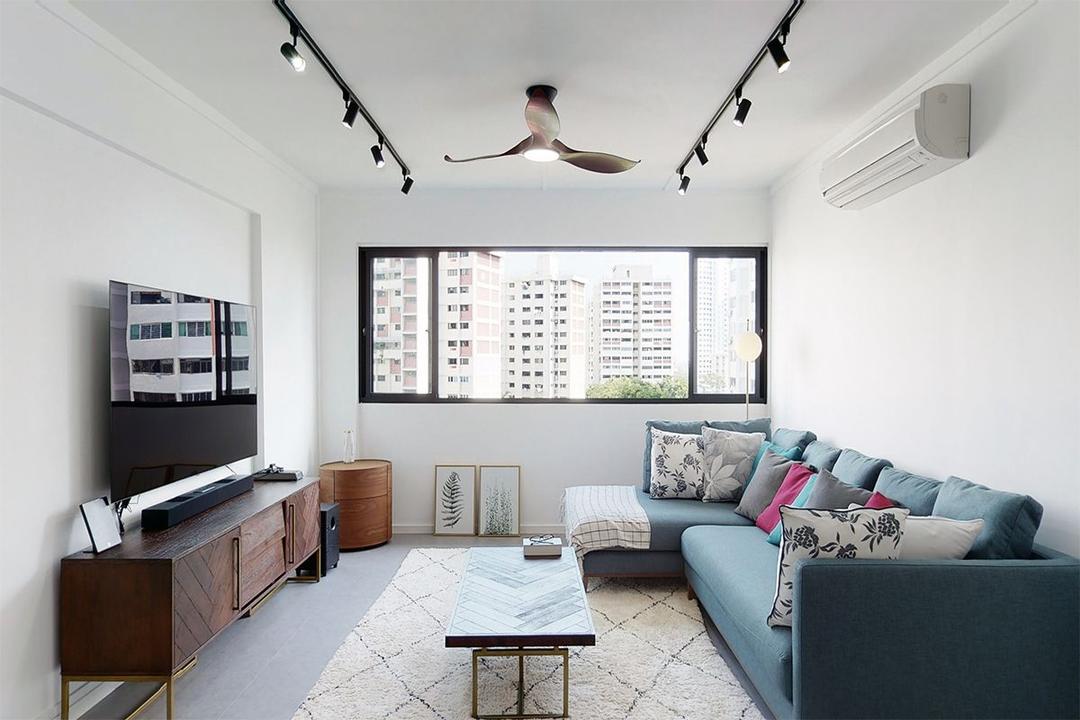 B: The reason why most designers and homeowners prefer flats with squarish layouts is that they’re easier to plan around, especially when it comes to furniture placement. The living area is one such space, so the process of designing it was quite straightforward.

Aside from filling it with pieces like a Castlery chaise sofa and a TV console from Commune which they wanted, the owners also requested new windows that could be opened as wide as possible. To maximise airflow, no window grilles were installed, which makes the entire living room especially breezy on windy days.

Due to how much natural light there is, most of the rooms were intentionally painted in off-white, because it’s a suitable neutral background for the colourful furnishings that also bounces light around the entire house.

On revamping the kitchen 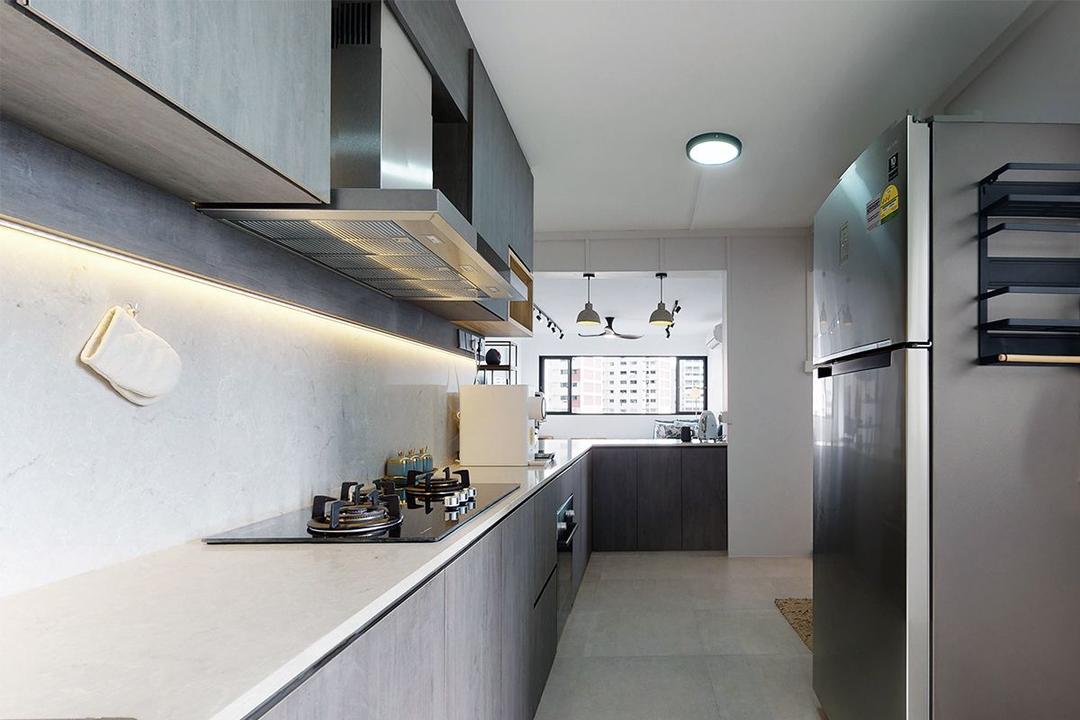 B: The kitchen’s open-concept layout was inspired by another HDB flat in the vicinity which we had previously worked on; the owners had seen it online and that’s how they got to know about us.

While the kitchen is squarish like the rest of the rooms, there was a bit of an obstacle involving a structural pillar – it’s located right beside the breakfast counter, and it’s the reason why the kitchen couldn’t be fully opened. But still, the kitchen is much brighter compared to when before the walls were demolished. 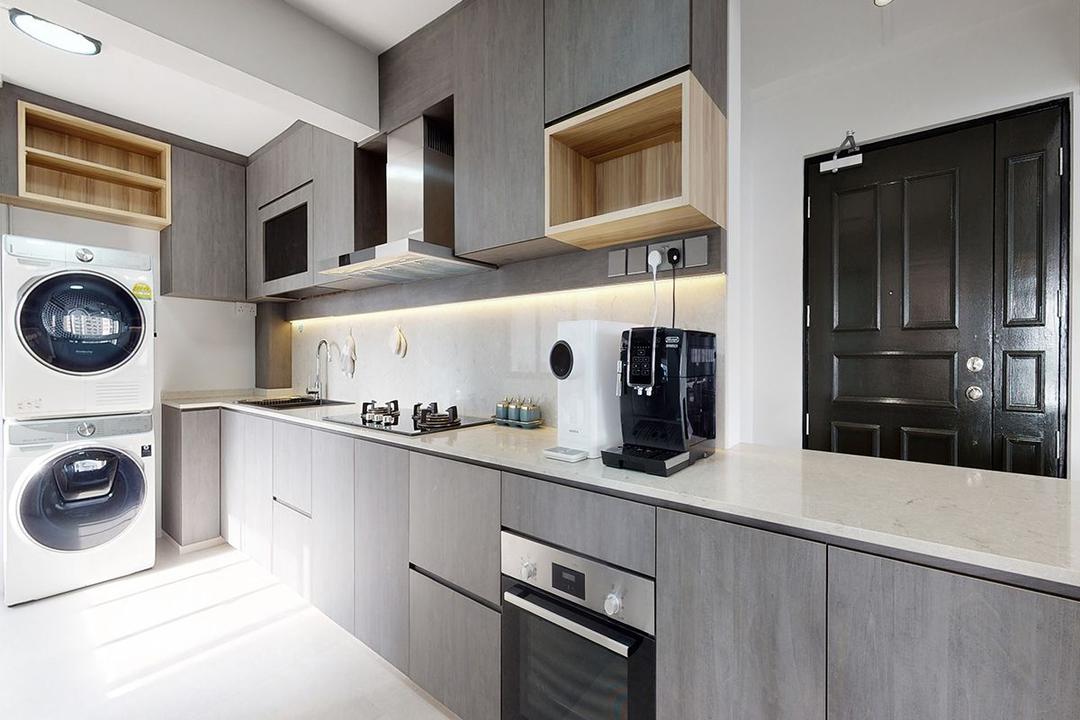 The renovation for the rest of the kitchen was quite straightforward. A new quartz backsplash was installed where the hob and hood are; those two fixtures were deliberately installed deeper in the kitchen to keep any cooking smells from spreading to the living area.

Other than that, the end of the kitchen counter was also slightly extended in the direction of the washing machine. Although it’s a relatively minor change, it does help to maximise corner space.

About changes made to the dining area and balcony

B: For the dining area, the only major consideration that had to be made was the orientation of the dining table as well as the alignment of the lights overhead. On the other hand, renovating the balcony was a fair bit more complicated because it used to be a separate space that was separated by a glass sliding door. 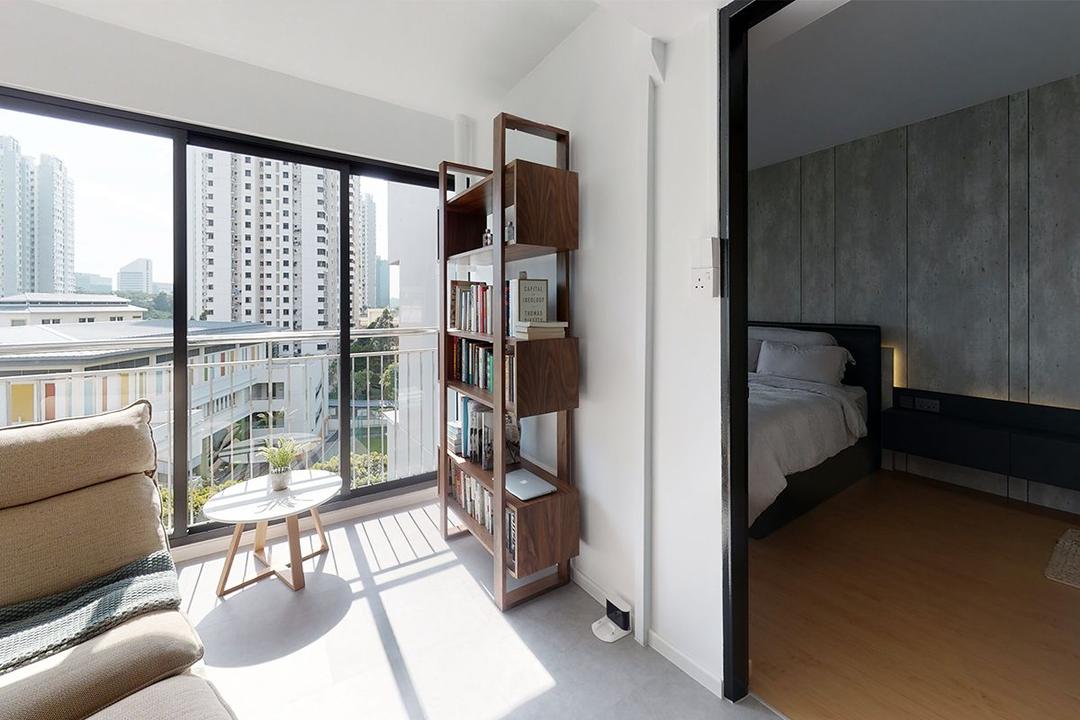 The decision to merge the balcony with the rest of the house was made because it would result in a larger footprint indoors while making maintenance easier. To make this change, we had to submit a proposal plan to HDB, aside from getting their clearance to install the new picture windows.

Some of the flat’s aircon pipes are also embedded beneath this part of the house. Usually, they’re connected to a bathroom drainage point, but since there was an existing floor trap in the balcony, the pipes were routed here before we levelled the floor with cement.

On the master bedroom and walk-in wardrobe’s makeover 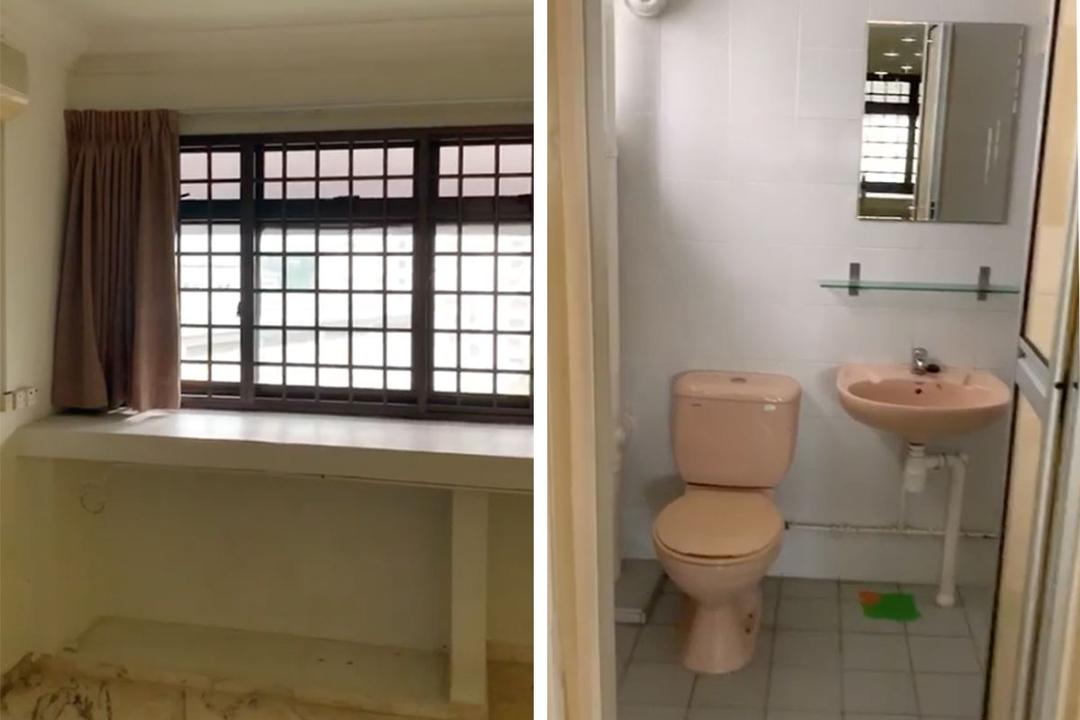 The master bedroom (left) and en suite (right) before the renovation.

B: Initially, the master bedroom was completely empty, save for an air-con unit ledge near the window that we thought could be hacked away. However, when we applied for a hacking permit from HDB, it got rejected – that was a bit of a surprise. In the end, we came up with the alternative idea of turning the spaces beneath the ledge into storage cabinets. 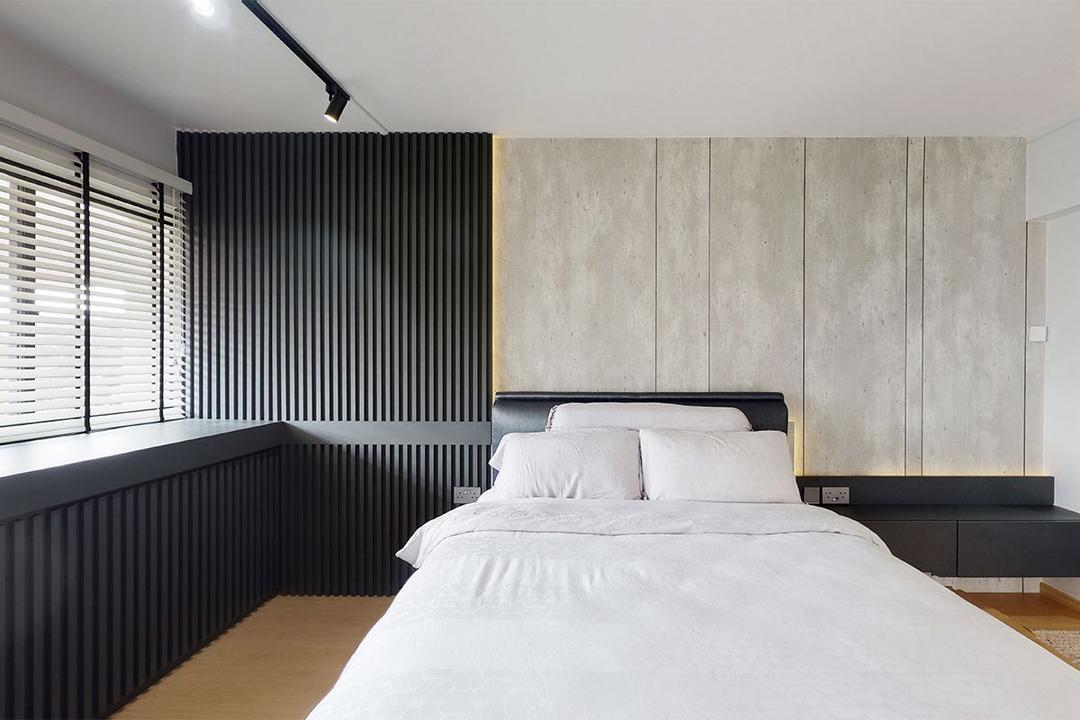 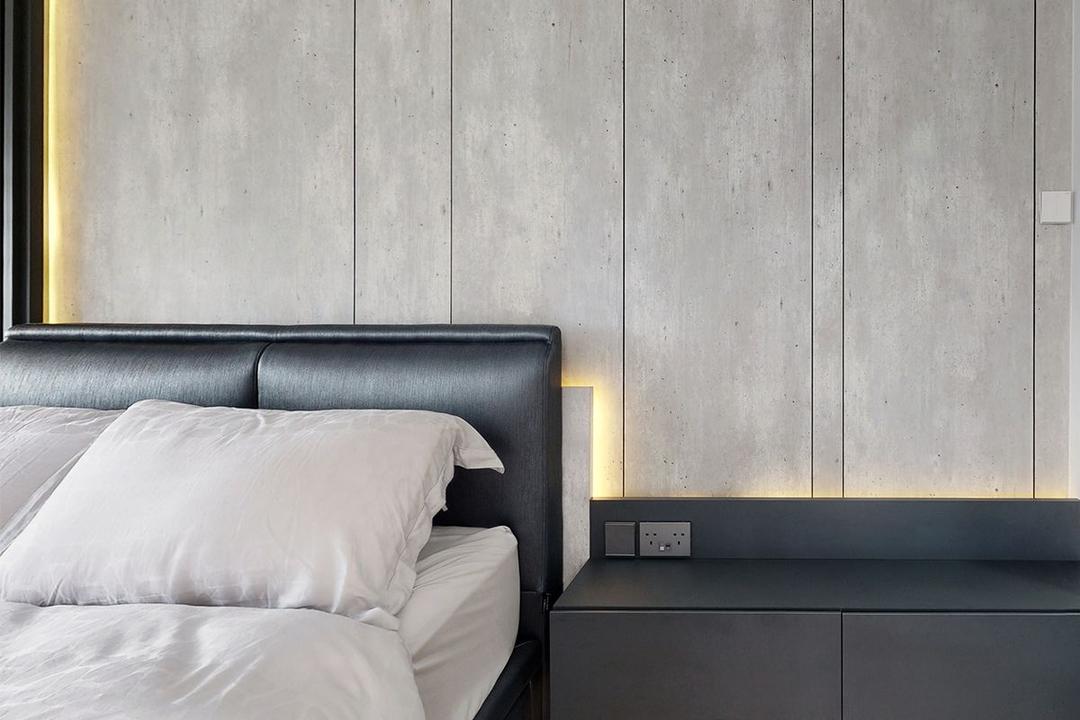 For décor, the wall behind the headboard is partly covered with light wood laminates, which makes it look less heavy than it would if we had covered it entirely with black wooden slats. There are also warm LED strips installed along the edges of the headboard and side drawers to provide some illumination at night. 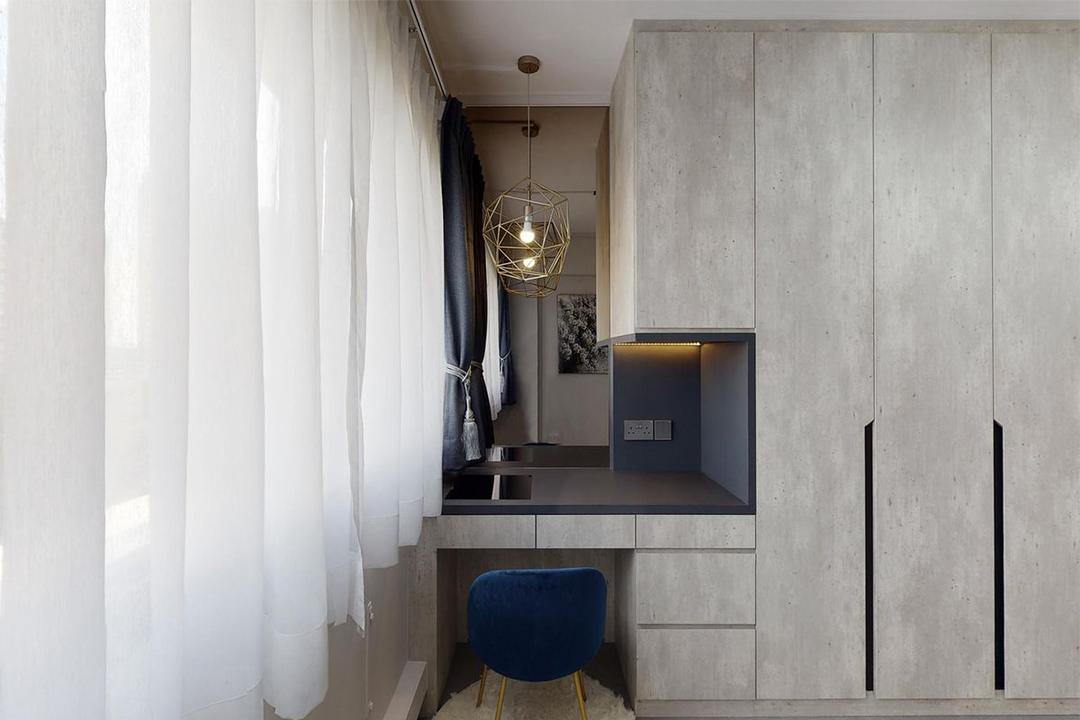 Because of the homeowners’ preference as well as the obstacle posed by the air-con ledge, there are no storage spaces for clothes in the master bedroom. Instead, one of the bedrooms across the master bedroom was turned into a walk-in wardrobe. 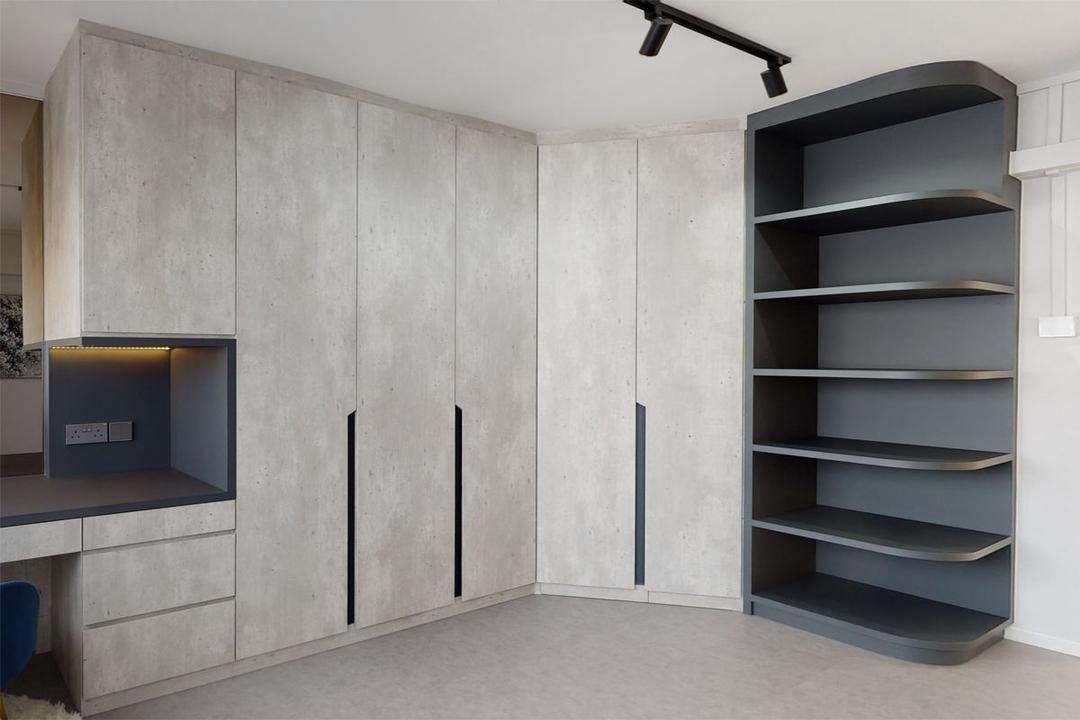 Aside from the vanity table which has an accessory drawer with a transparent glass top and built-in sockets, there’s also a customised closet with an angled design that gives it more storage capacity – in fact, the compartment is large enough such that you could stand in it and there would still be enough room to move about freely.

B: Although this was a relatively straightforward project to work on, COVID-19 had thrown a spanner in the works, which resulted in an overall longer timeline, even though the actual work took approximately two months to complete.

The renovation was finished in mid-June last year, but it could have ended sooner if not for the Circuit Breaker. Most of the work was done at that point, and what was left was only the carpentry. 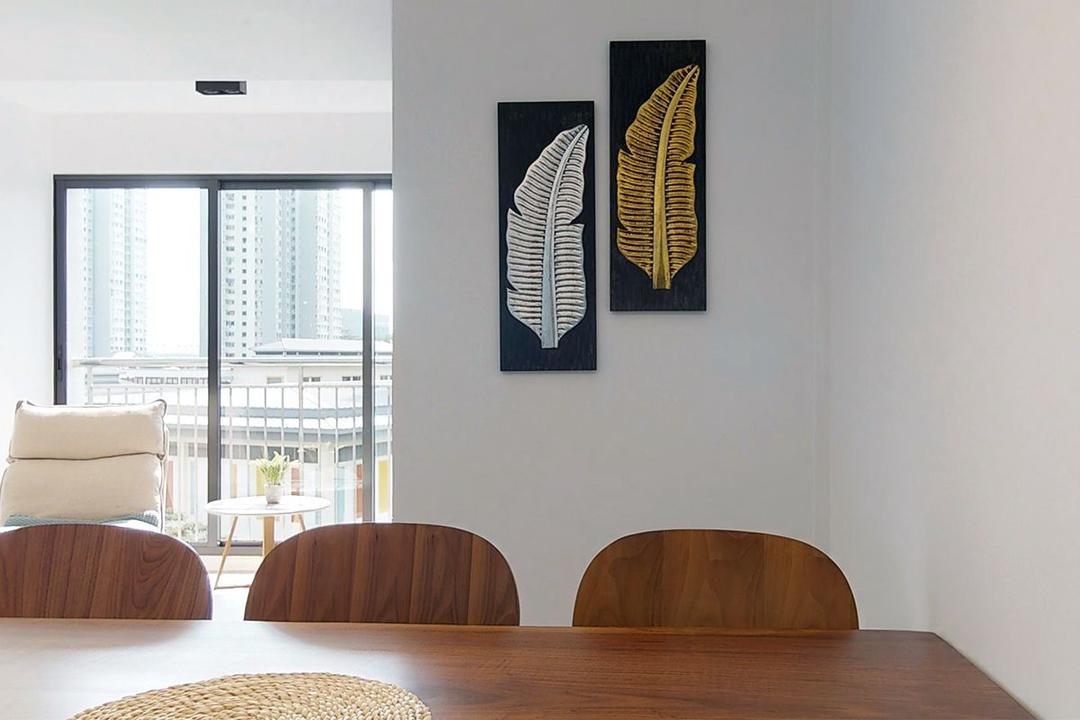 Thankfully, the homeowners were understanding about the whole situation. It was due to this collaborative process that we were able to achieve a result that everyone is satisfied with! 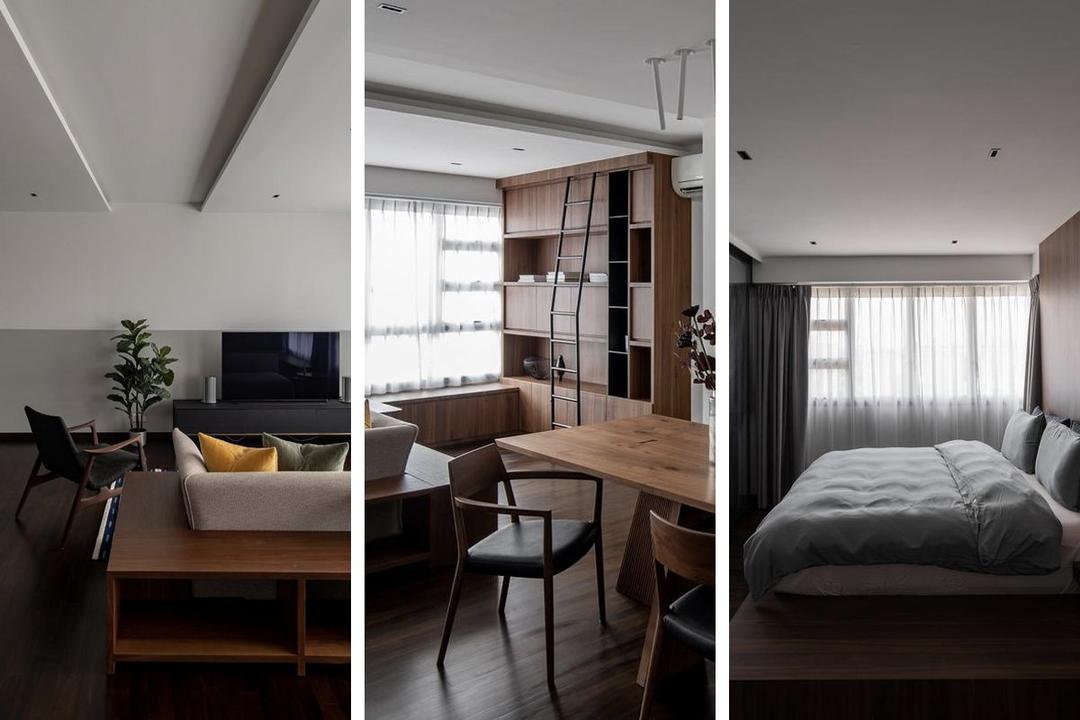 RENOVATION JOURNEY
Elegant AMK HDB Flat Proves That Homes Get Better with Time
It might have taken longer than usual to get this 5-room HDB flat in Ang Mo Kio renovated, but the results are absolutely stunning!

RENOVATION JOURNEY
Joo Chiat Walk-Up Really Looks Like a Moroccan Desert Villa
Following a trip to Morocco, this Singaporean couple was inspired to give their Joo Chiat walk-up apartment a desert chic makeover.

RENOVATION JOURNEY
Couple Turns 7 Year-Old HDB Flat into Cool Industrial Haven
After purchasing this 5-room resale HDB flat in Punggol last year, its owners gave it a top-to-toe revamp, turning it into an industrial-style home for two!
Preparing the next article…
Recommended for you 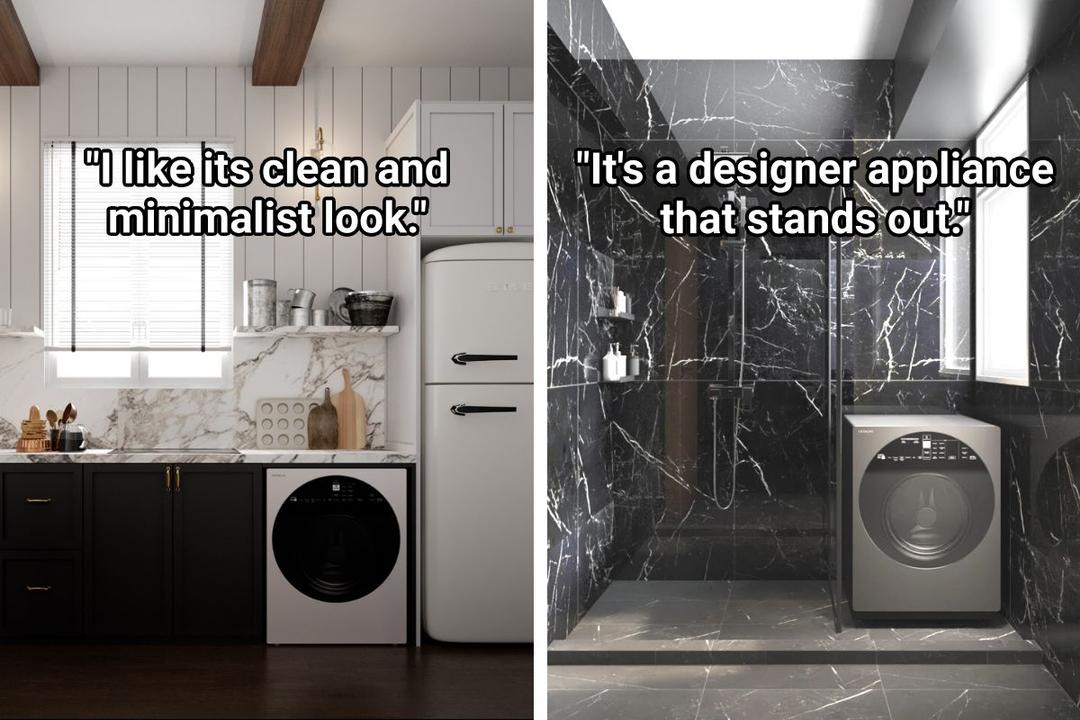 PRODUCT REVIEWS
IDs Are Raving About This Uber Stylish 2-in-1 Washer Dryer. Here’s Why