For the first-ever 19 Eighty Three x Bowerman collab, the two firms teamed up to refresh this Compassvale home by giving it a more efficient layout.

Mention minimalism to anyone who knows their home designs, and what would probably come to their mind is a clean-lined interior, free of clutter and bereft of any distracting elements. Weave in cosy details, such as natural layers and subtle accents, as well as calming neutrals – and you’ll get this charming Compassvale home, which belongs to a family of six. 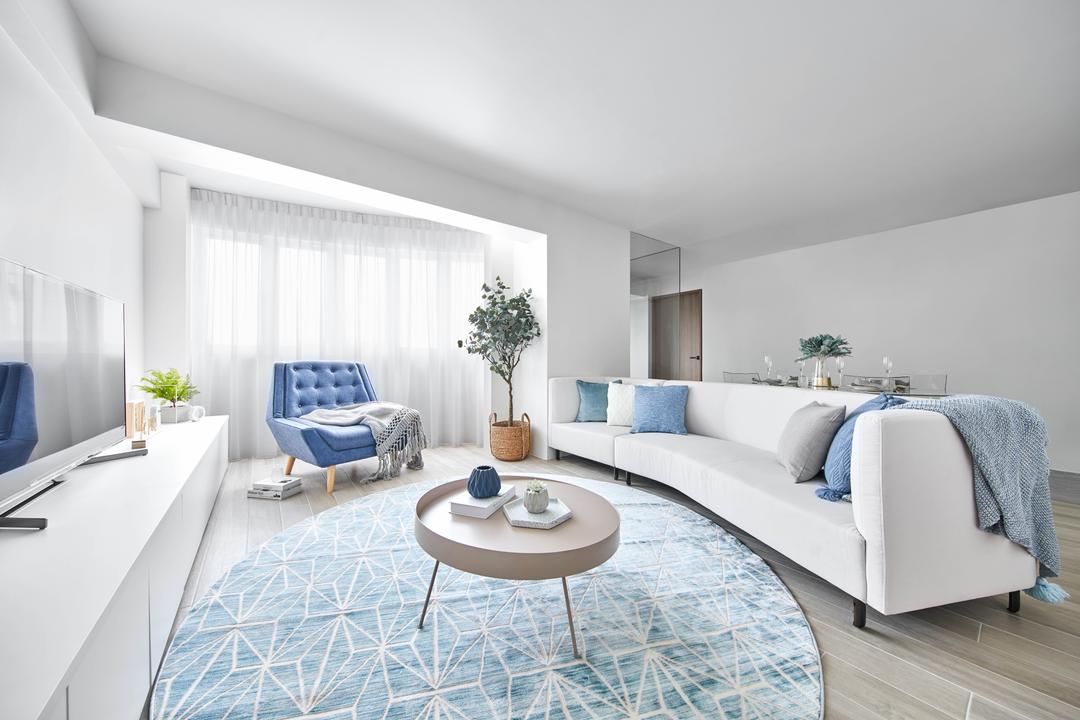 Bringing out this balanced image of serenity and cheer took careful restraint on the part of Ben Teo, a seasoned designer who heads local design firm 19 Eighty Three. “We had to be cautious with all the different elements. The balance had to be right,” says Ben. “For example, using too much white would make the house look too clinical, which was something the owners were concerned about.” 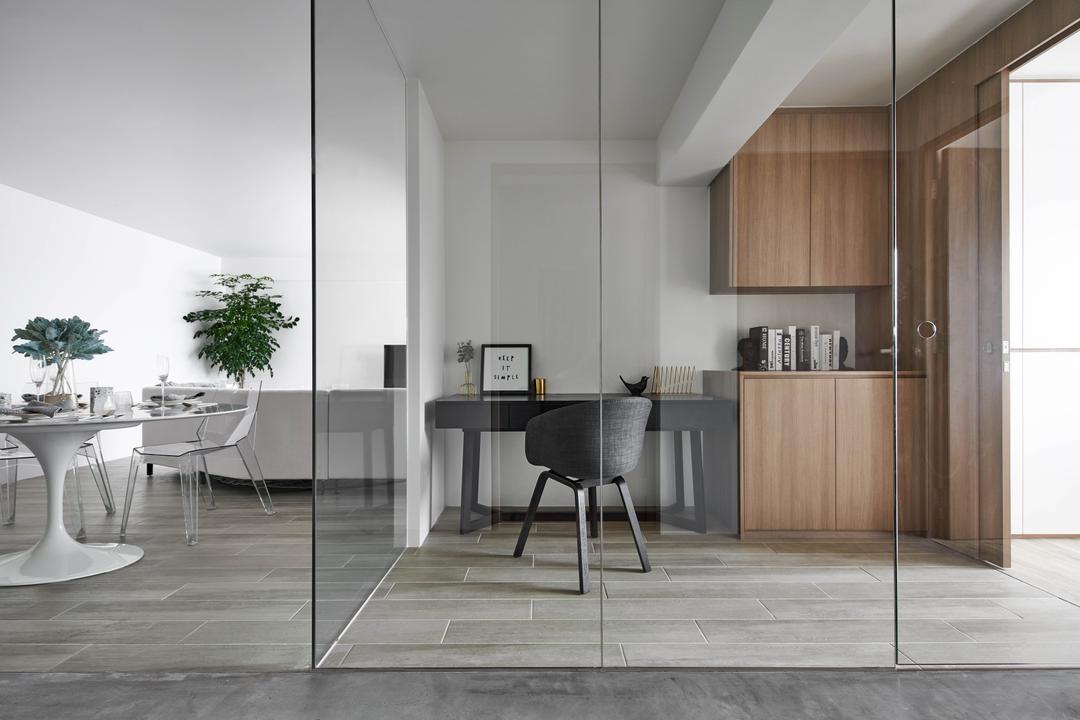 Occupying an once-empty nook, the study was created in response to the owners’ request for a private conference room for business calls.

Although 19 Eighty Three was responsible for coming up with the overall aesthetic and ensuring the final look of the apartment would match that of the clean and bright vision that its owners had in mind, Ben and his team also received help from Chris Huang, a fellow local designer who heads Bowerman Interior Planners.

“How we met was really quite interesting,” shares Chris. “He (Ben) was browsing the Internet when he came upon images of my work being used without permission and he took it upon himself to inform me about it. People say chivalry is dead, but Ben definitely proved me wrong!” 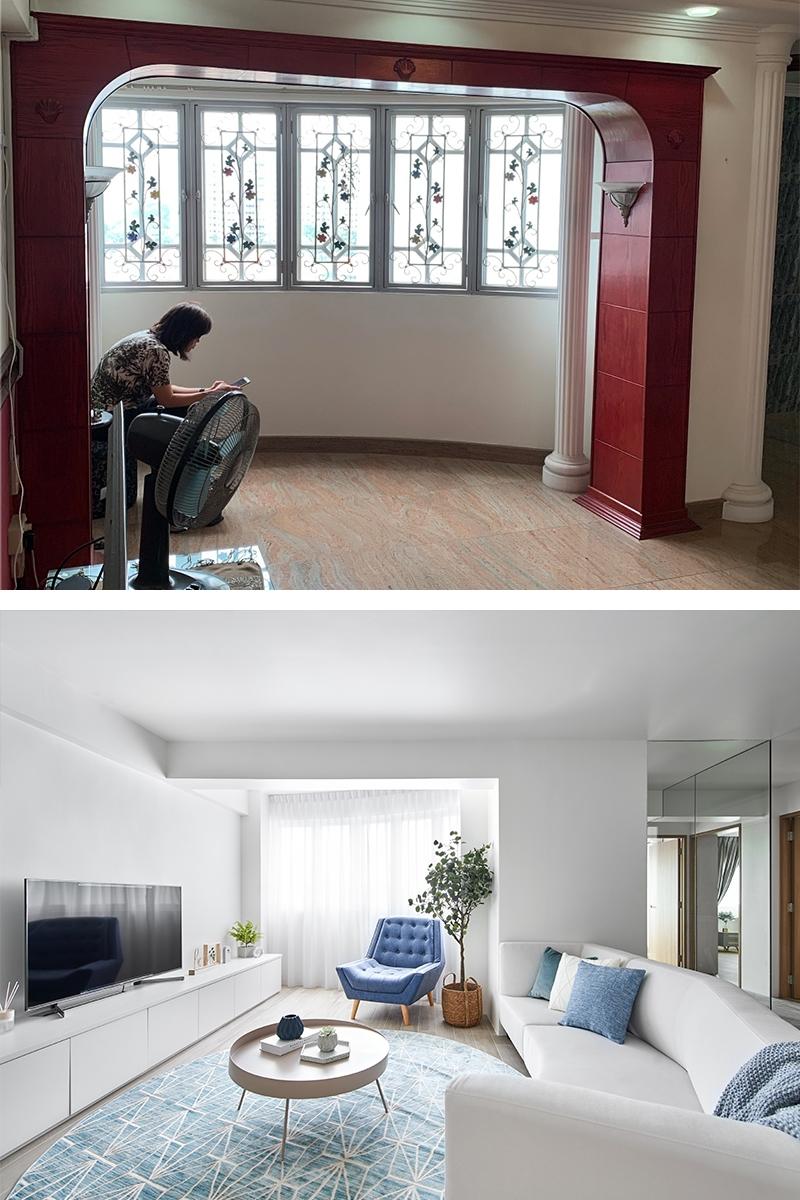 In the living room, a gently-curving sectional sofa now complements the arc of an adjoining balcony and the clean lines of its surroundings.

That polite gesture became the tinder of a strong friendship between the two designers, and when the chance to work on the same home arose, Ben and Chris wasted no time in getting things off the ground, with each of them taking on the roles of creative lead and project manager respectively.

“The direction I had in mind was to create something that the owners would appreciate, both in the practical and aesthetic sense,” says Ben. In addition to pushing the boundaries to create more useful, style-forward rooms, that mostly meant replacing the home’s original Victorian-inspired columns and frames with contemporary curves and clean lines. 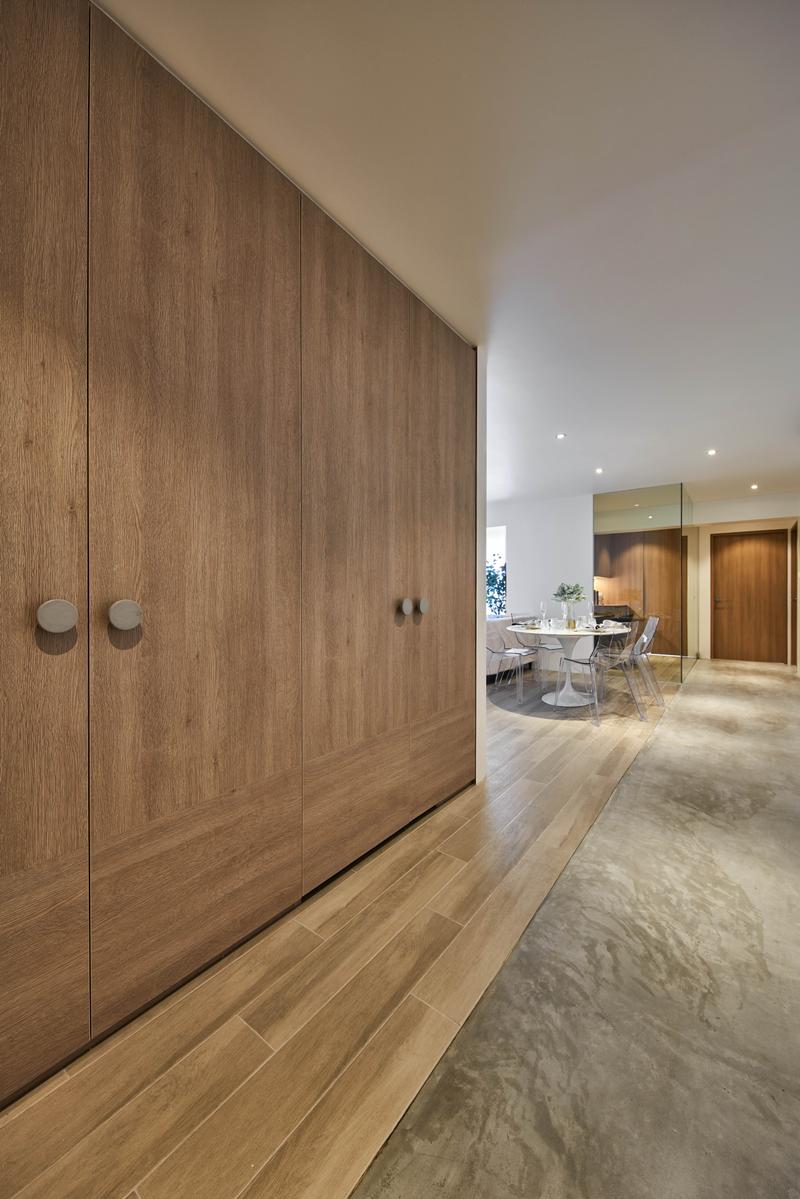 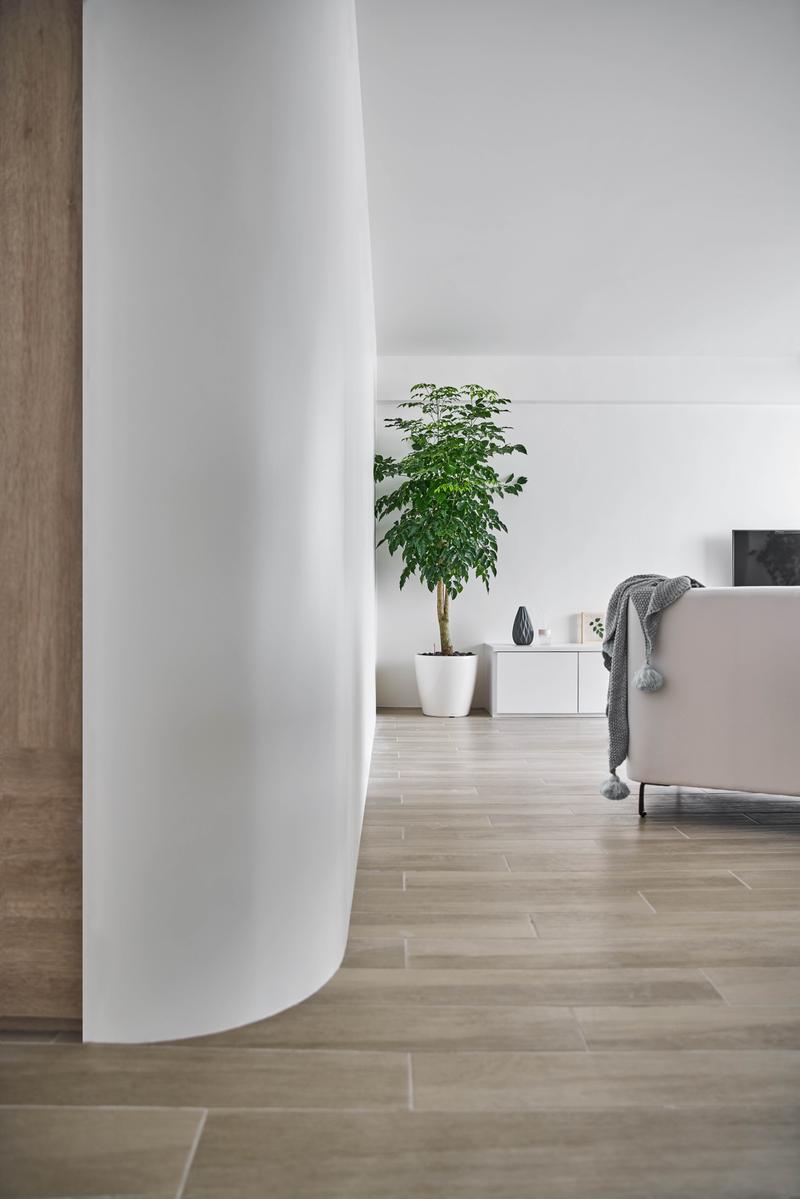 To create a more visually pleasing profile, a curvilinear facade was built for the home’s household shelter, which lies hidden behind a rustic wooden door. 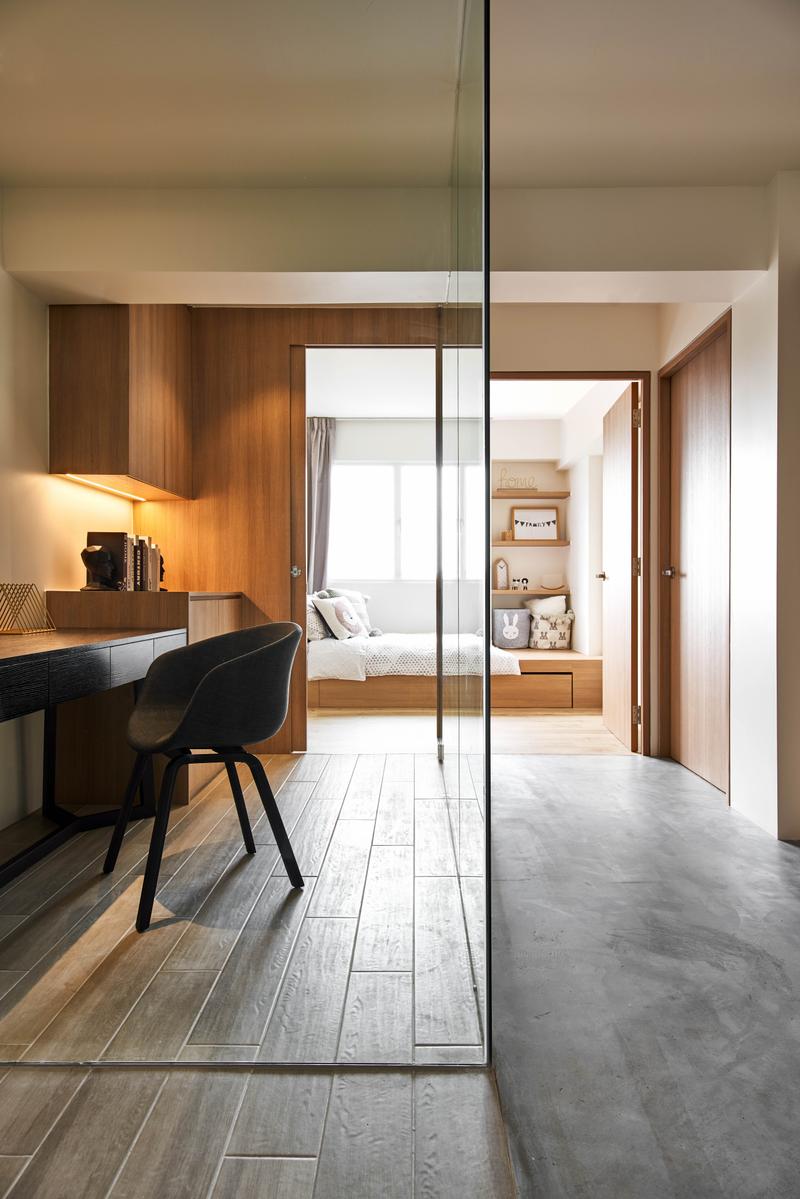 Post-renovation, the walkway running along the living room and study’s length now features concrete flooring, which creates an eye-catching look when paired with warm wood tiles. 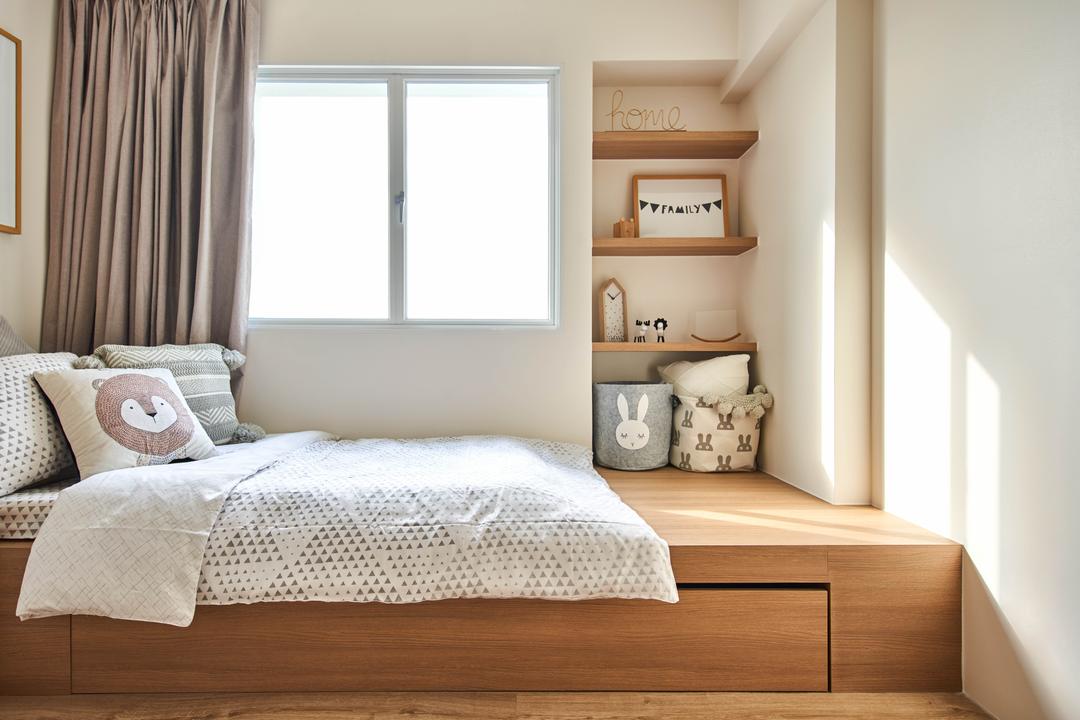 To maximise every inch of space, Ben’s plans for the junior bedroom included building in a platform bed and filling out a dead corner with useful display shelves.

Perhaps, the space that best reflects Ben’s "practical, yet stylish" design philosophy is the study, which connects to a junior bedroom through a pocket sliding door. “The glass walls were a nice touch as they provide the privacy the owner needs for conference calls, but they also let the light in, which isn’t possible with a regular study,” says Ben. “Part of the credit goes to Chris as he had the technical know-how on how to make them (the glass walls) go all the way up to the ceiling for a more seamless look.” 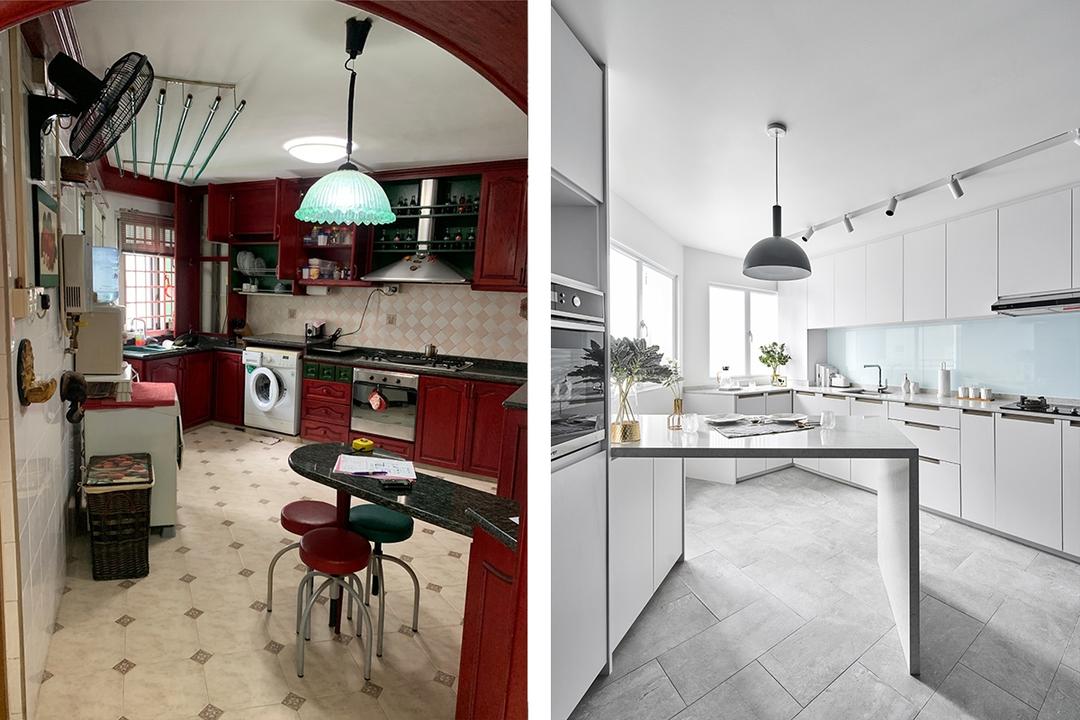 The kitchen, before and after its makeover. 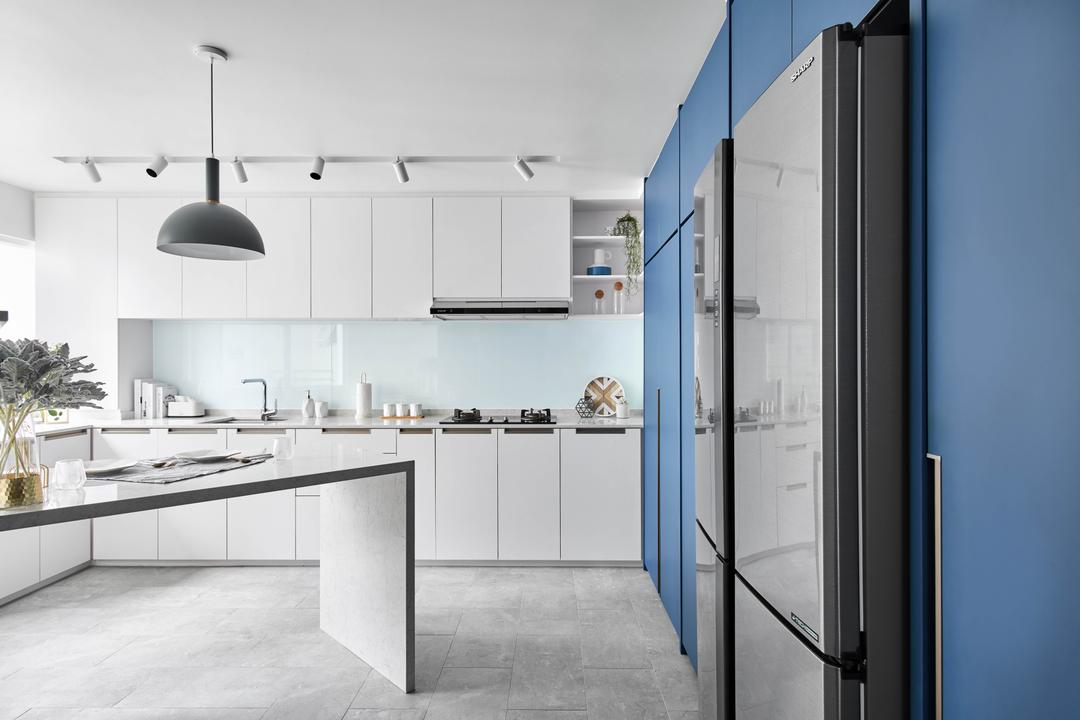 Explore: 20 Designs For EVERY Kitchen Layout, From Galley to L-Shaped
Just like the study, the kitchen is another example of how the entire home benefitted from Ben’s design sensibilities as well as Chris’ technical expertise, both as a designer and as a homemaker.

Eye-catching colour scheme aside, the design duo also devised a more efficient layout for the kitchen by building in a bright blue cabinet wall that has every bulky appliance, including the refrigerator, washer and dryer, tucked away along the same stretch of space. “That way, there’s nothing obstructing movement in the cooking area, which is something you’ll naturally want if you’re a home chef, like the homeowners and myself,” explains Chris. 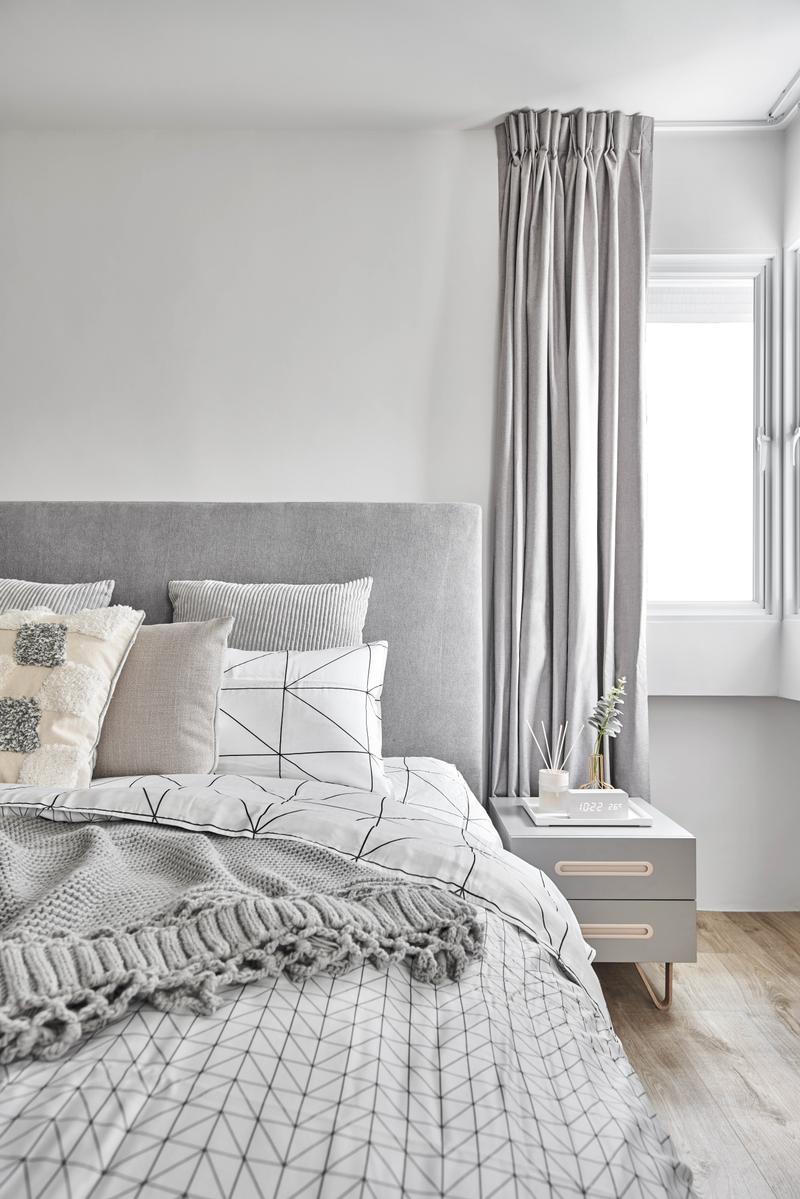 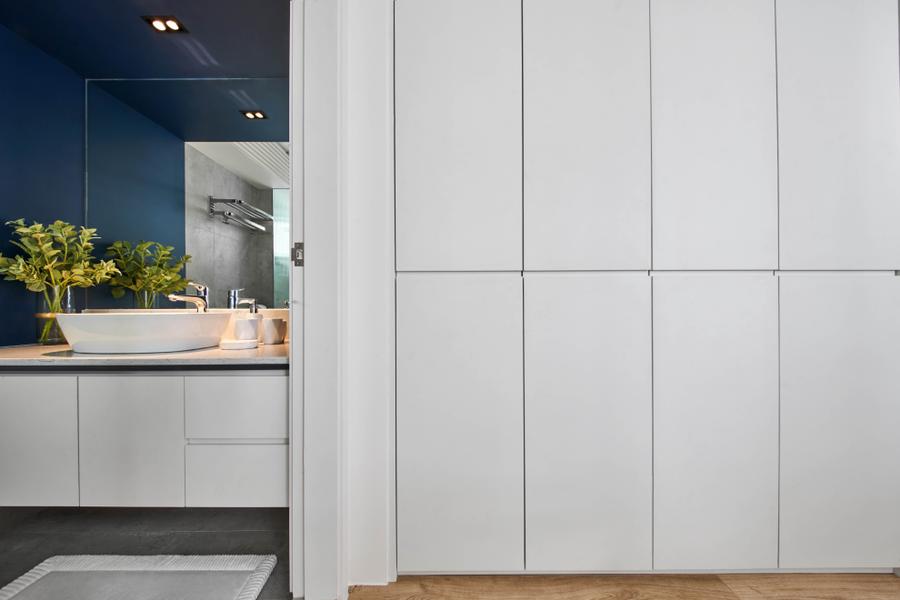 While the master bedroom’s revamp was mostly no-frills, with just a king-sized bedframe and a compact side table as its new furnishings, a sizeable wardrobe with a pared-down design was added to the space as a storage solution for clothes and other belongings. 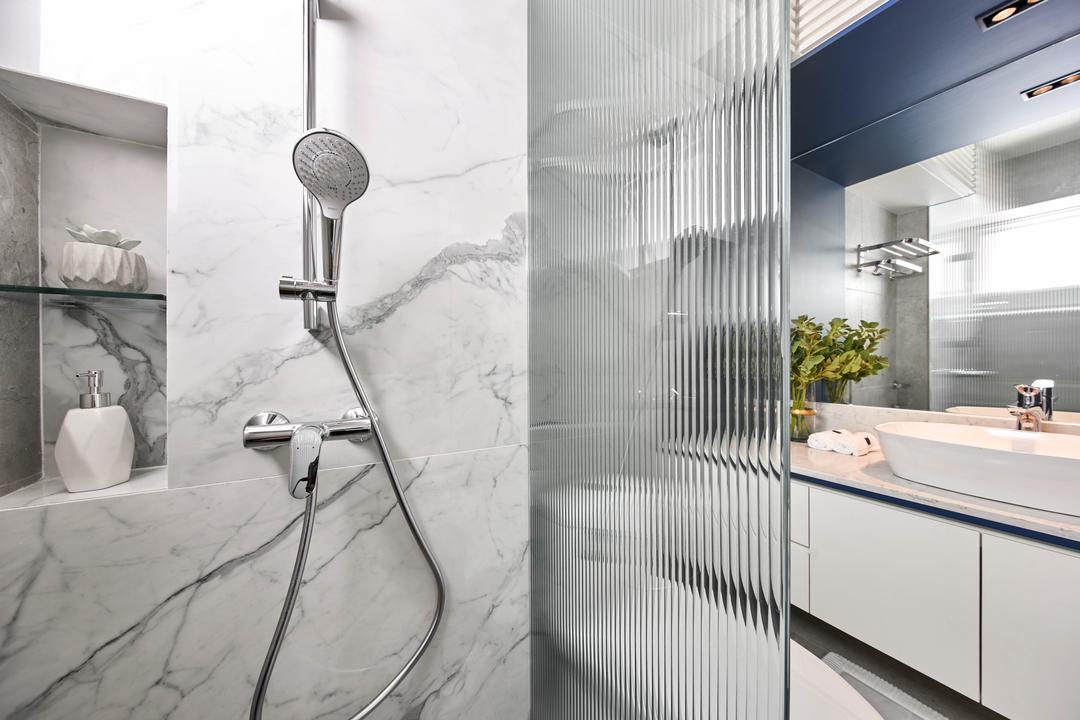 Marble-look tiles and a fluted glass shower screen add texture to the revamped master en-suite, while a counter set into a bold blue wraparound makes for a unique vanity set-up. 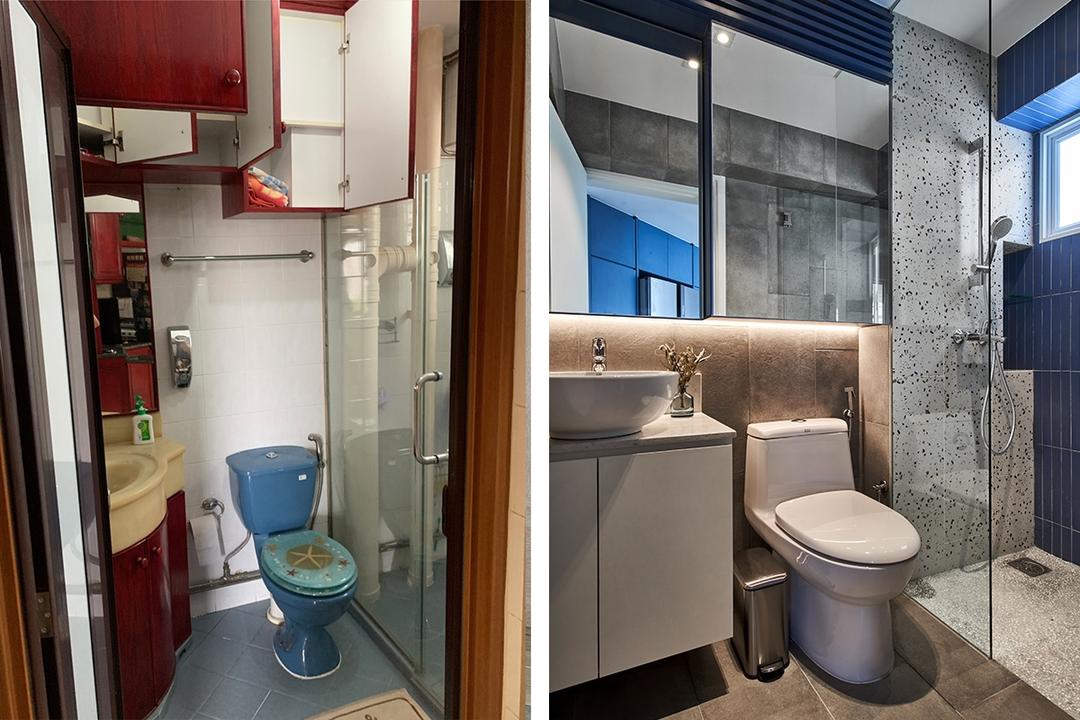 Similar to the en-suite, the common bathroom too features a blue-on-white colour scheme post-renovation, but plays things up with trendy terrazzo patterns and navy subway tiles. 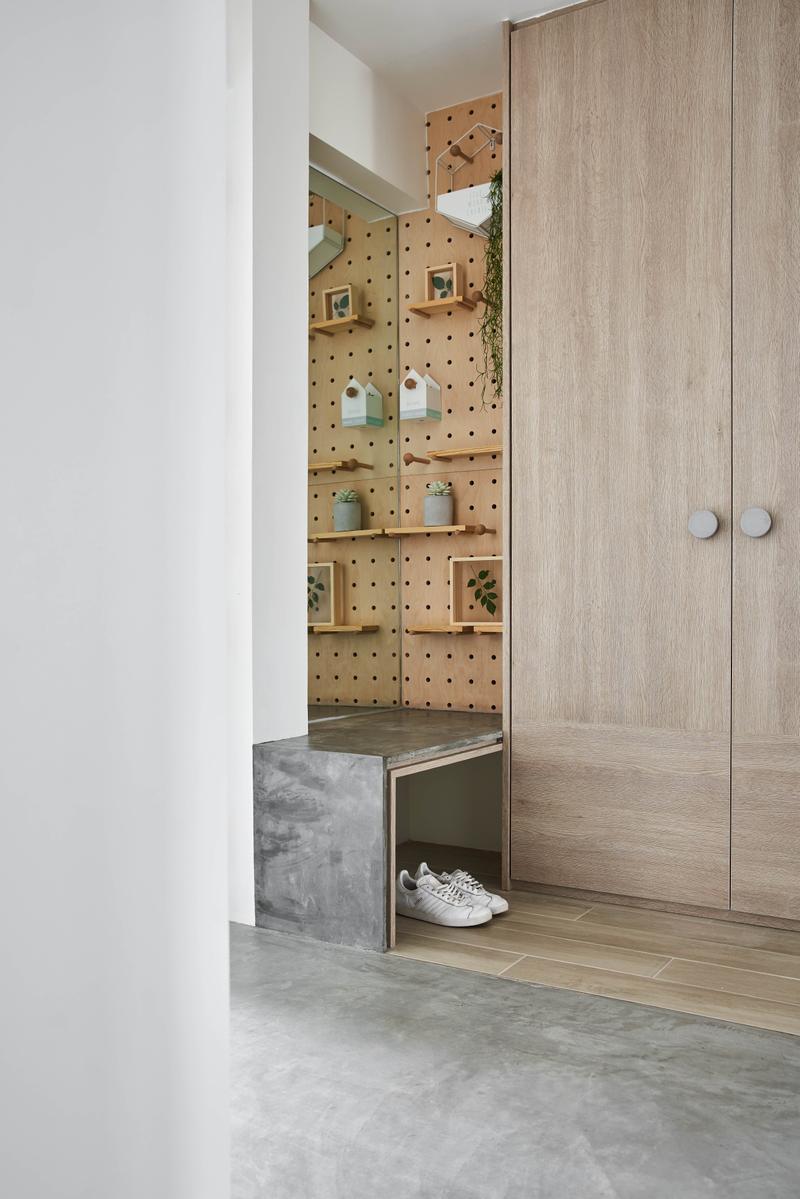 The entrance foyer, which features concrete laminates, mirrors and a wooden pegboard, is an example of the collaboration’s creative synergy. While the seat’s design came from Ben, the suggestion to include the pegboard was Chris’.

As fruitful as this partnership has been for Ben, Chris, and their clients, it’s just but the beginning for future growth. “The smallest details make a difference, and I feel that working with each other has opened my eyes to much more,” says Ben about the partnership. “Everyone gets to learn something.” It’s a sentiment shared by Chris himself. He says: “Yes, this has been a really healthy collaboration. In fact, we’ve another joint project between our firms planned, so keep a look out!”

Tired of searching for an interior designer?

Well, let us help you! Simply let us know your renovation requirements and get quick, personalised quotes from five local interior design firms for free!

Also, stand to receive the Qanvast voucher kit and become eligible for the Qanvast Guarantee (a free scheme that safeguards your renovation deposits) when you engage an interior firm through our free recommendation service! 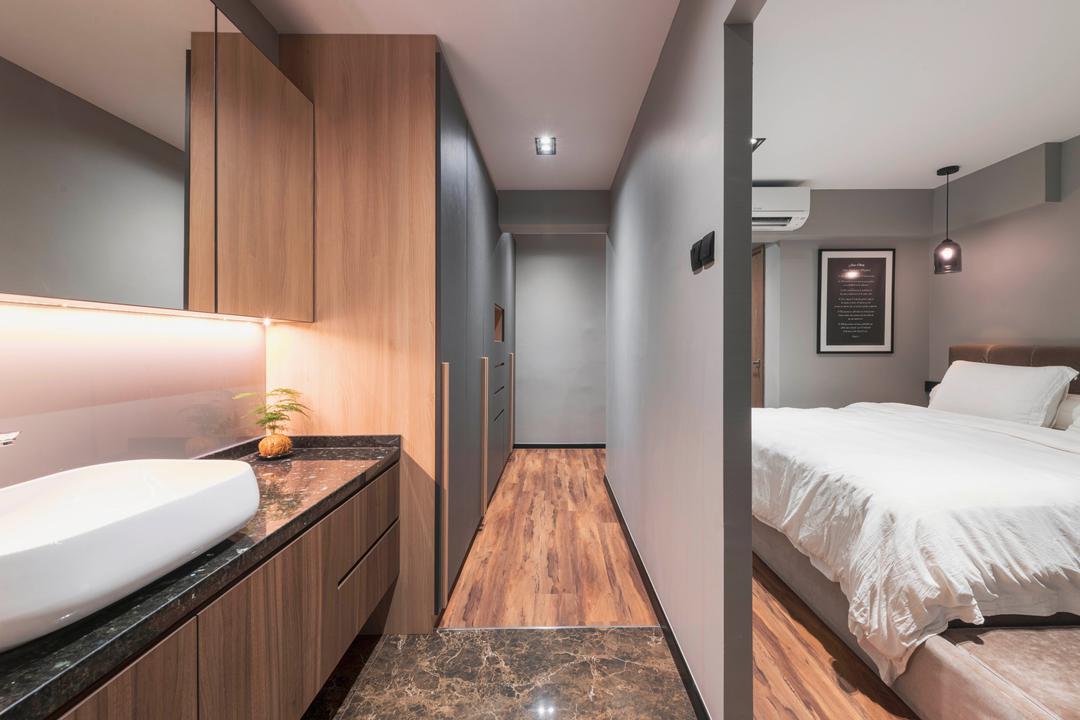 RENOVATION JOURNEY
In This Space-Efficient Clementi Home, No Room Goes to Waste
With Voila's help, this family successfully transformed their 5-room Clementi HDB flat into a cosy, space-efficient home from its original lived-in state. 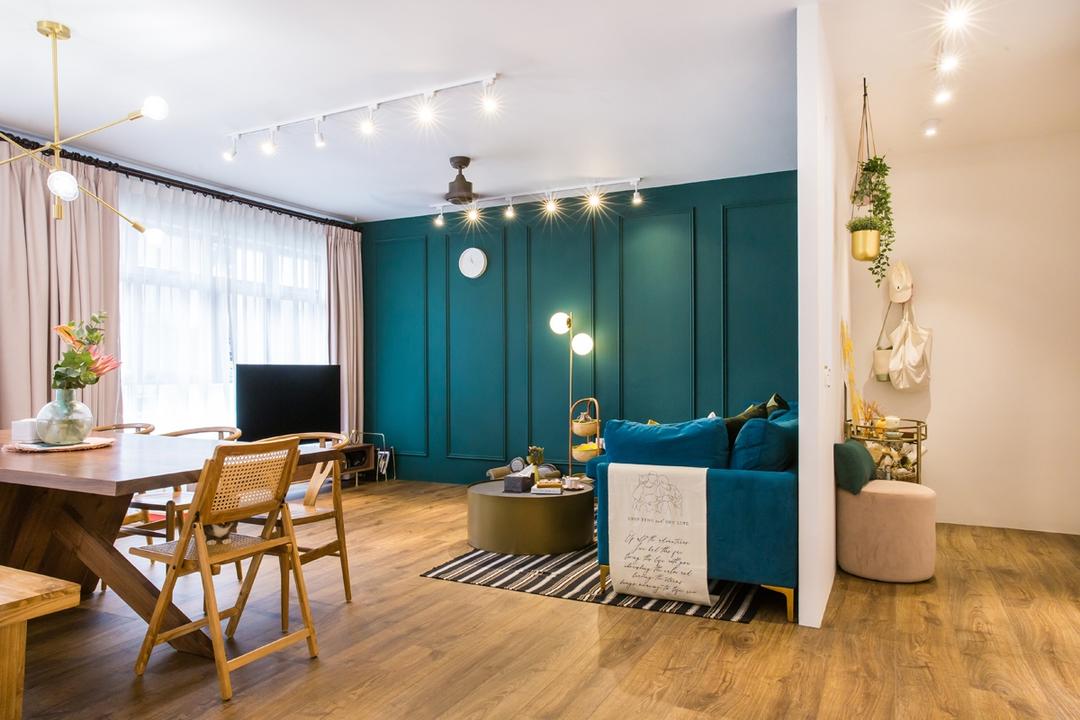 RENOVATION JOURNEY
It Took a Year to Purr-fect This Bukit Batok BTO’s Layout
While most homeowners would be in a rush to finish their renovation works, couple Shu Ling and Chin Feng took the time to figure out what works best for them. The end result? A cat-friendly forever BTO home that has an optimised layout. 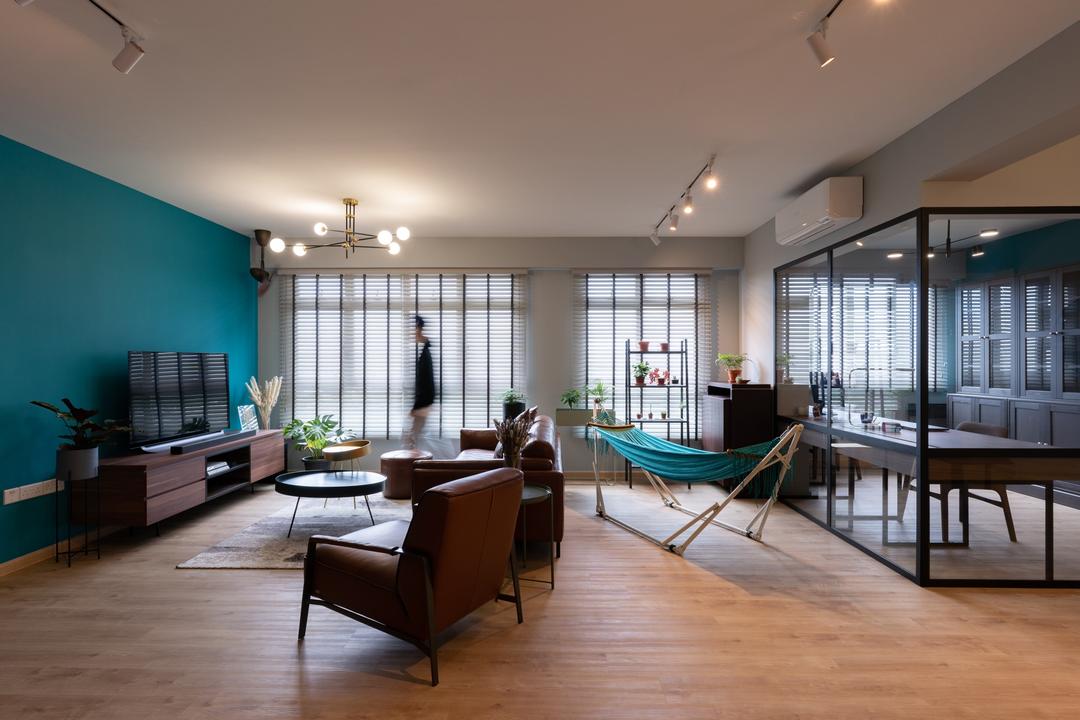 RENOVATION JOURNEY
How Creating Mood Boards Led to This "Real Scandi" HDB Home
Contrary to popular belief, Scandinavian interiors aren’t solely white and wood. Drawing inspiration from photos of traditional spaces, this couple created a home that’s a true call back to Nordic influences.
Preparing the next article…
Recommended for you