A Scandinavian Maisonette Revamped for the Next Generation

A peek into a family home that's full of fun and history.

Coming fresh off a two-month long revamp, this Scandinavian-inspired HDB maisonette showcases a white-and-wood look with functional built-ins throughout. But at the same time, it’s also these fresh additions which make it hard to tell that this home shares a long history with its occupants, both past and present. 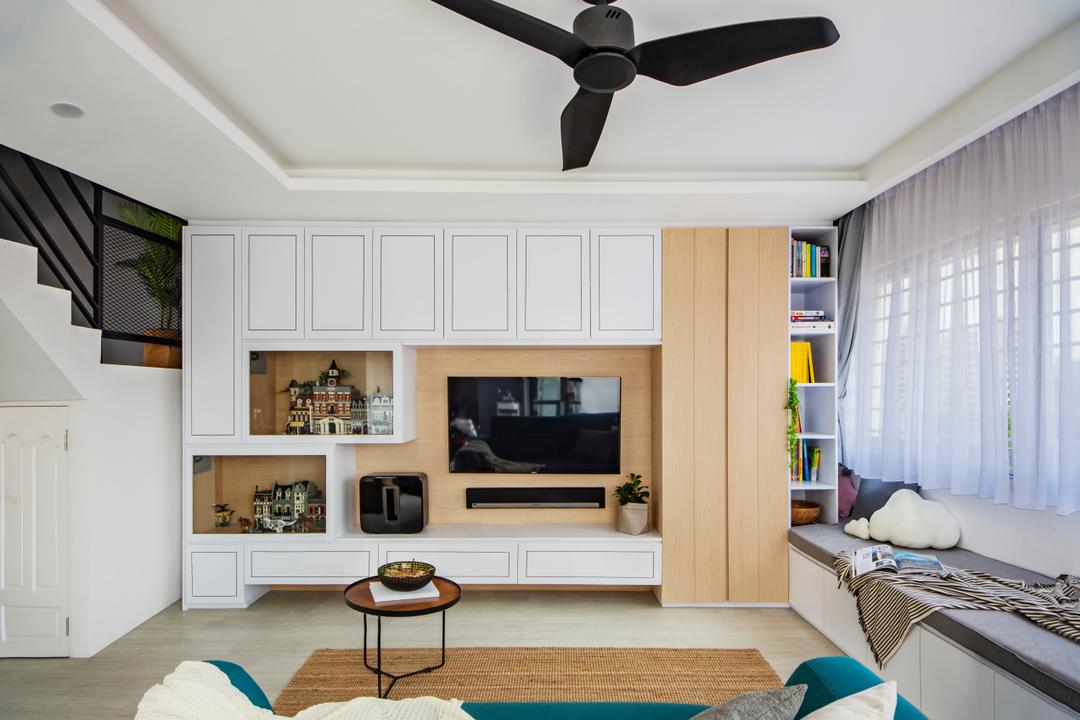 “This was the childhood home of the current owner and it originally belonged to her parents,” shares DISTINCTidENTITY designer Rachel who was responsible for the flat’s recent makeover. “But because her parents wanted their grandchildren to have a bigger living space, it was passed down to her.”

In order to find out how this Yishun home was revamped for the next generation, we sat down with Rachel to chat about its new features as well as nitty-gritty details of the entire renovation process.

Rachel (R): The homeowners wanted to achieve a Scandinavian look with a palette of minimal colours such as monochrome and grey hues. Because they have two young kids, they also felt that injecting a playful element to the home was a must. 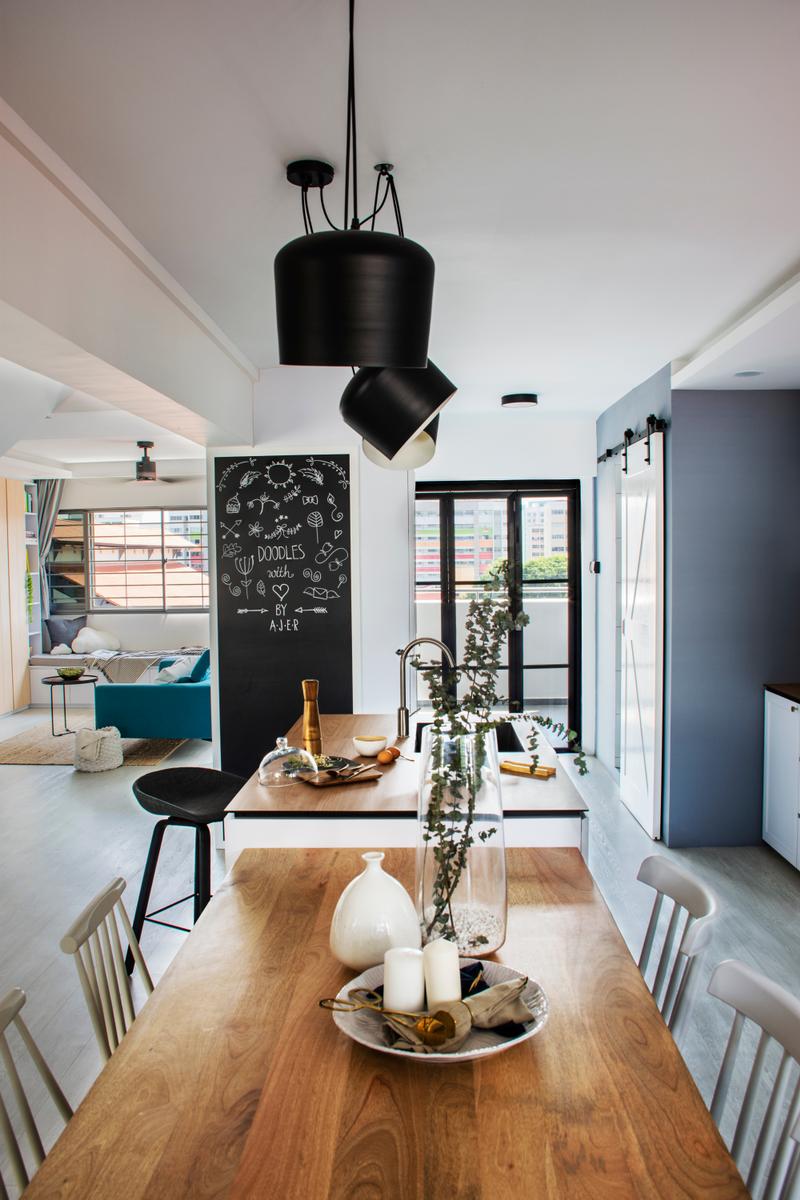 R: The moment you step into the maisonette, you will be greeted by a shoe cabinet that doubles as a seating area (for them to wear their shoes when they’re about to head out). The carpentry was then extended to the side and filled with pockets of space for them. This way they will have easy access to their knick-knacks. 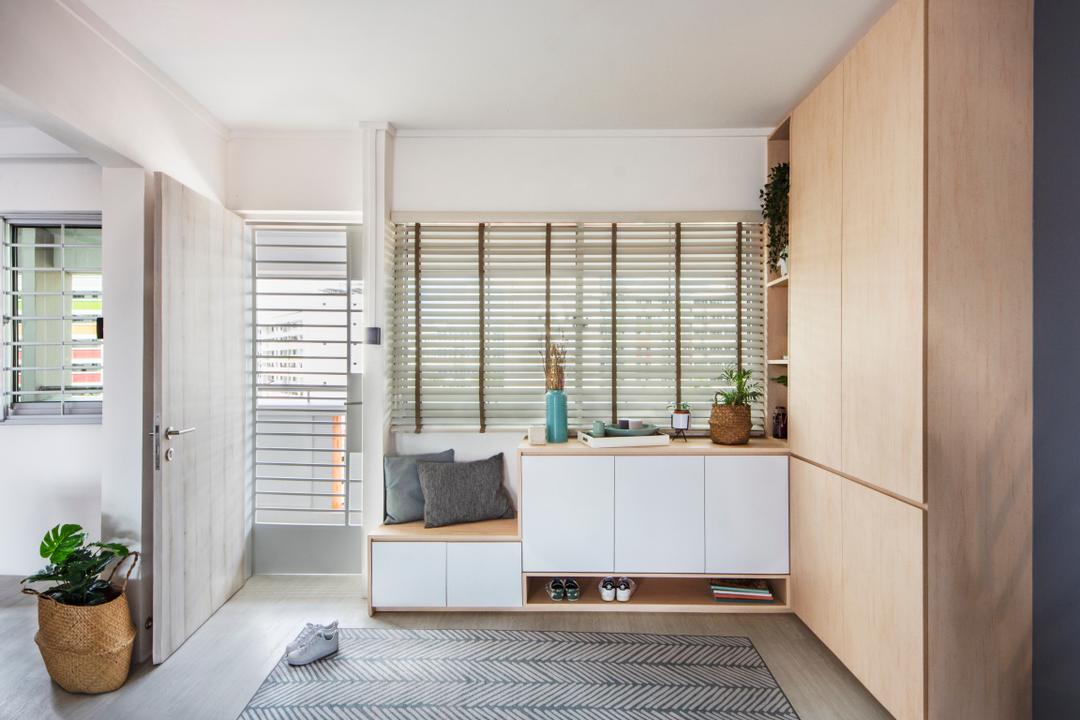 For them, the kitchen serves as a gathering space for bonding between the family members. It was definitely the focal point of this entire renovation. So, we hacked down the wall to open up the area. 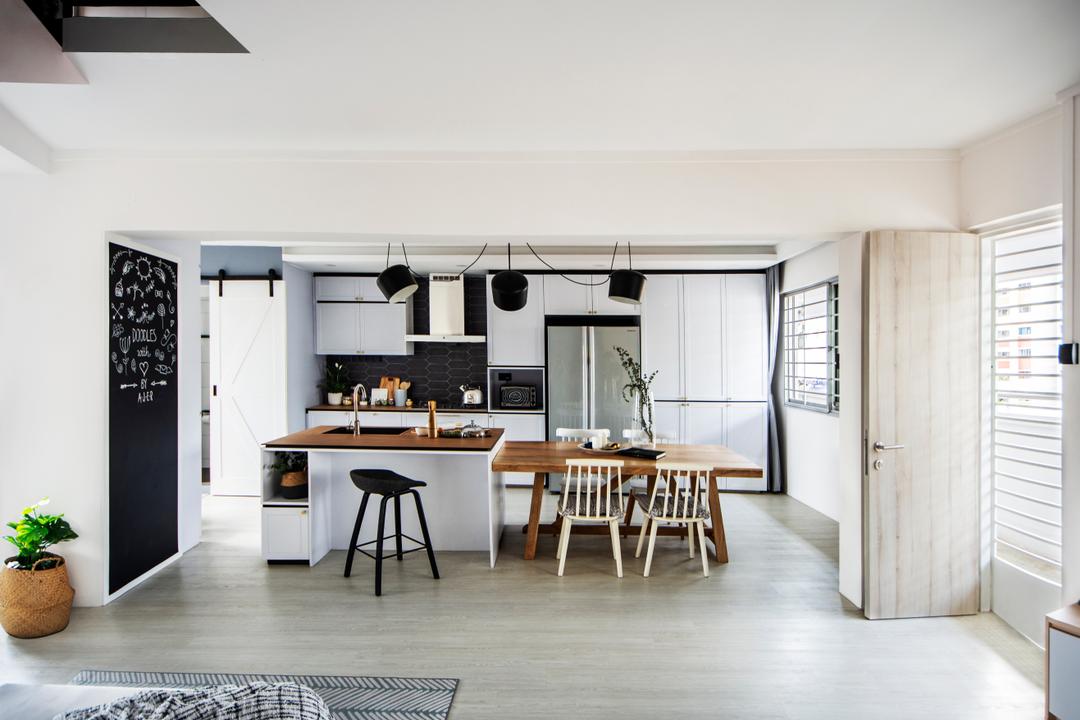 R: Since light is an important feature in Scandinavian-style homes, we kept most of the fittings (and walls) white. To prevent the space from looking one note, we decided to work with a backsplash made of black hexagon tiles, outfitted the built-ins with gold handles and finished off with framing details. 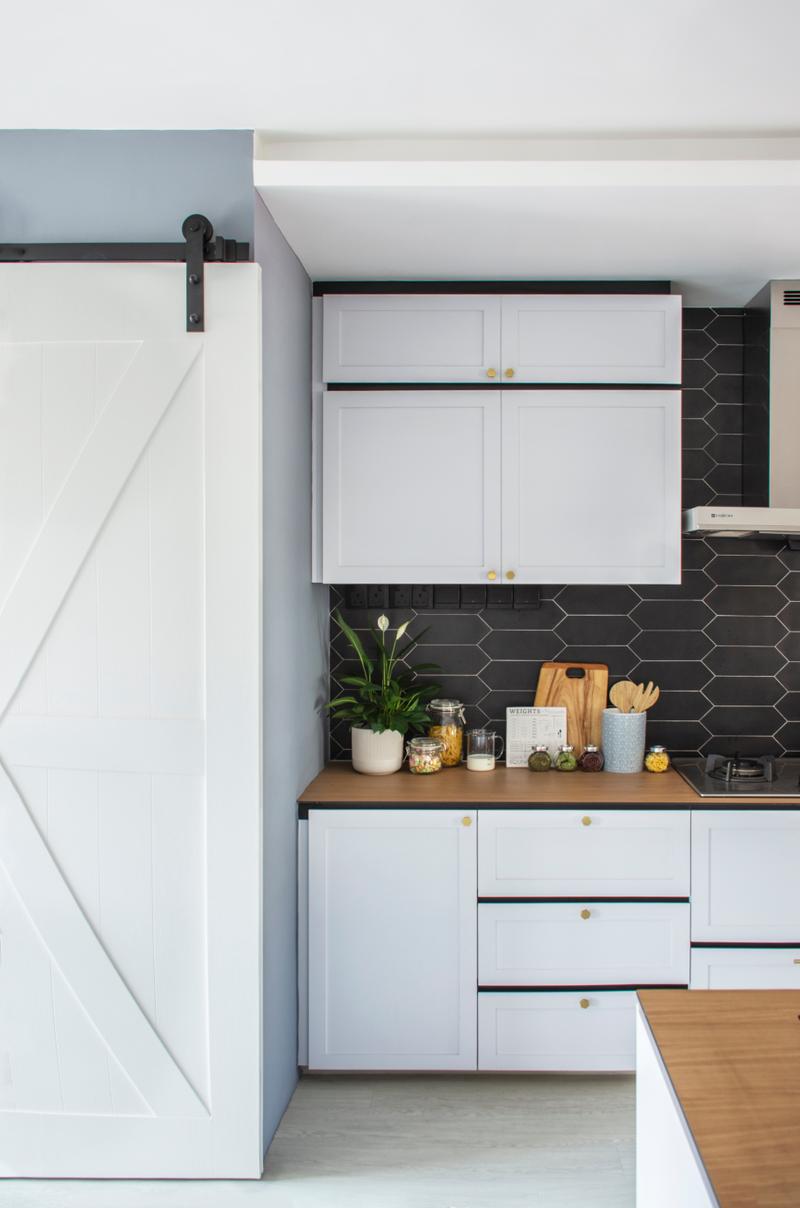 The homeowners themselves wanted a chalkboard sliding door to scribble on but I felt that it wasn’t very practical and came up with an alternative – we mounted it on the box up wall that I built around their pipes, preventing that area from looking too empty. 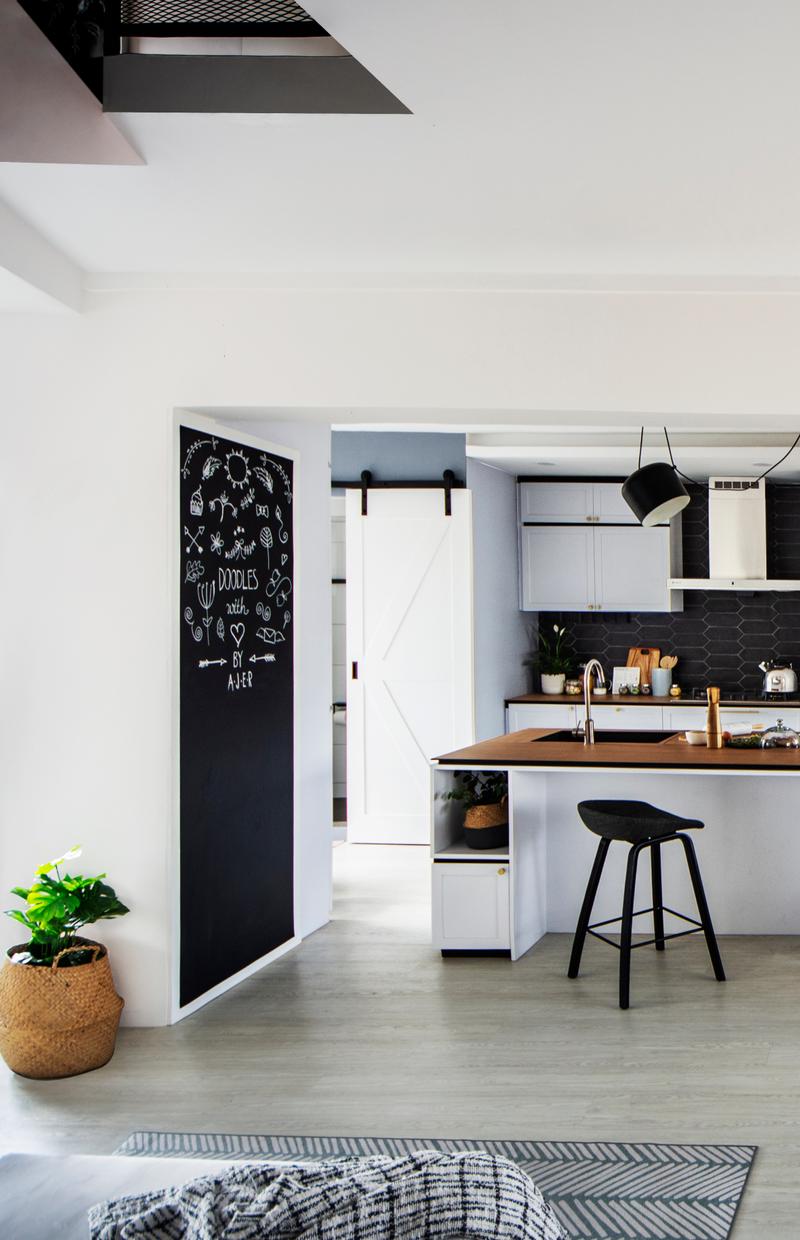 They already had an existing dining table but because we built in an additional peninsula, we wanted to “connect” them for an extended look. To do that, we decided to go with KompacPlus that have a similar tone and grain effect. 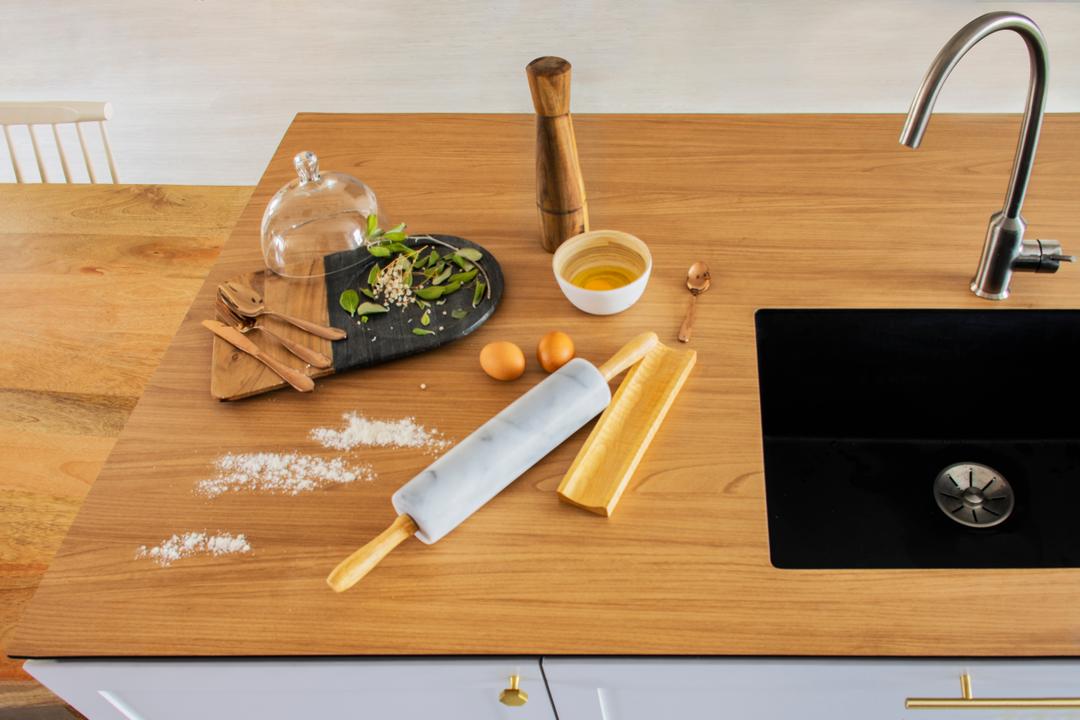 Frankly, the living room was the hardest to design. The homeowners love building and collecting Lego houses which they wanted to display. To incorporate them into the design, we had to find a way to fashion display cases that’s in line with aesthetic they were going for. We achieved that by using glass to allow show off the wood backing and then engraved it with black lines for that extra pop, without adding too much to the cost.

We also worked in a settee/daybed so that they have a cosy space to read in, complete with storage compartments for toys and other paraphernalia.

Despite the rather neutral tones employed to most of the spaces, furnishings and other elements prevent it from looking monotonous. Aside from the striking turquoise blue sofa in the living room, we clad the risers of the stairs with three types patterned tiles and stuck with a monochrome palette for a cohesive look. 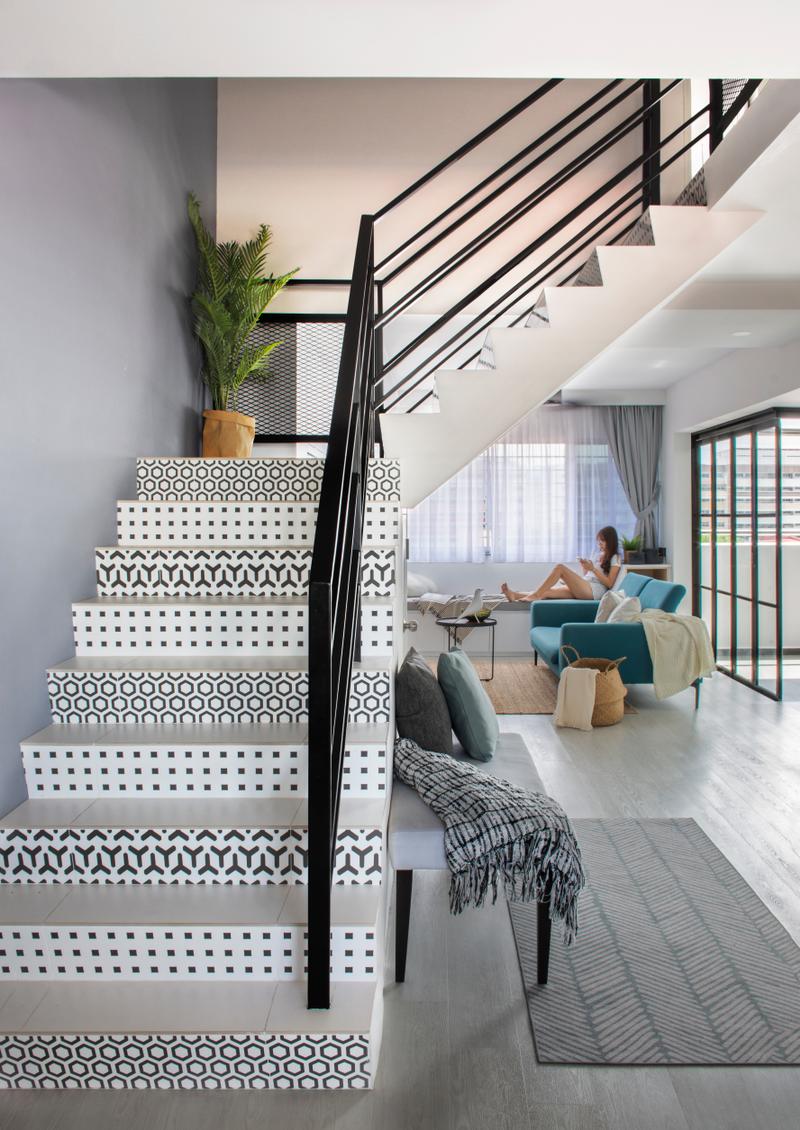 The same treatment was given to the common bathroom on the second floor. Here we changed out the old tiles for eye-catching blue and white alternatives. To complement it, we customised a blue cabinet, expanded that to fit in a double vanity and for additional storage. 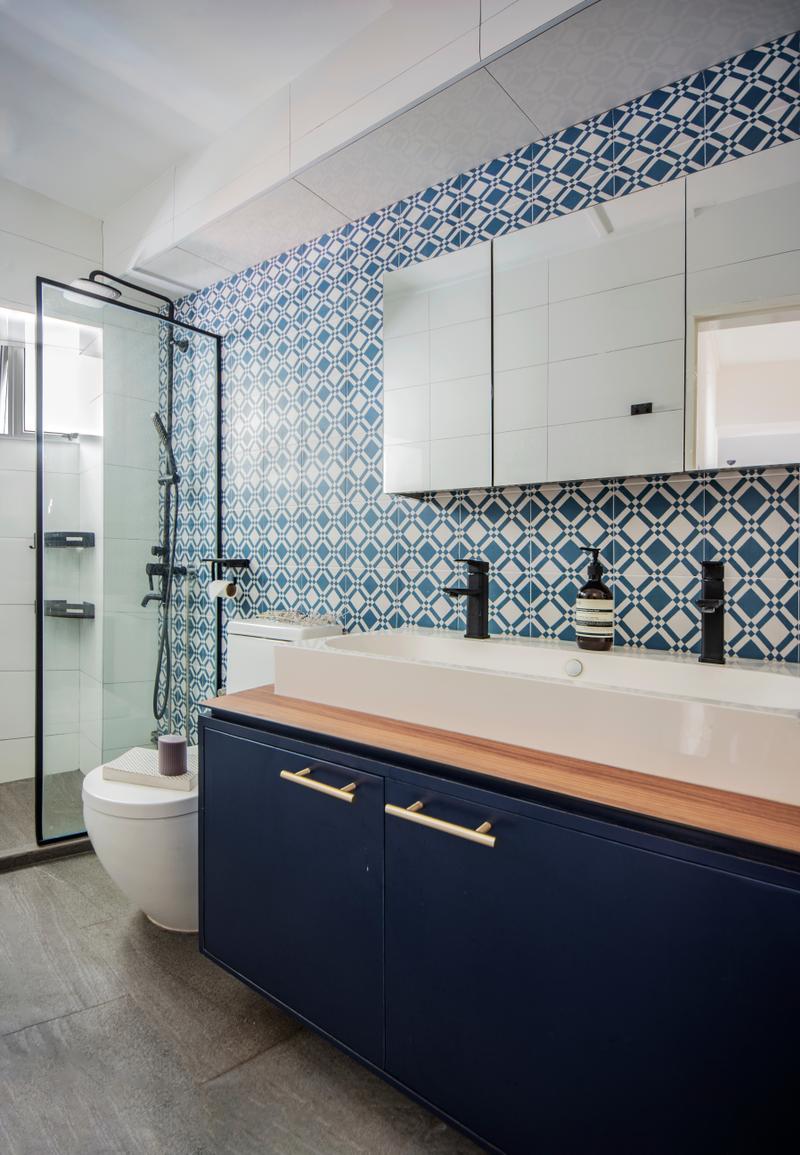 Aside from painting and fitting works, not much else was done for the children’s room. The highlight is probably the vaulted ceiling – with the ceiling fan and false ceiling, it would have created a low ceiling height. To prevent that from happening, we cut out a portion of it to make way for the fan. Most of the furnishings here are loose pieces too – this gives the homeowners the freedom to switch them out when the kids grow up. 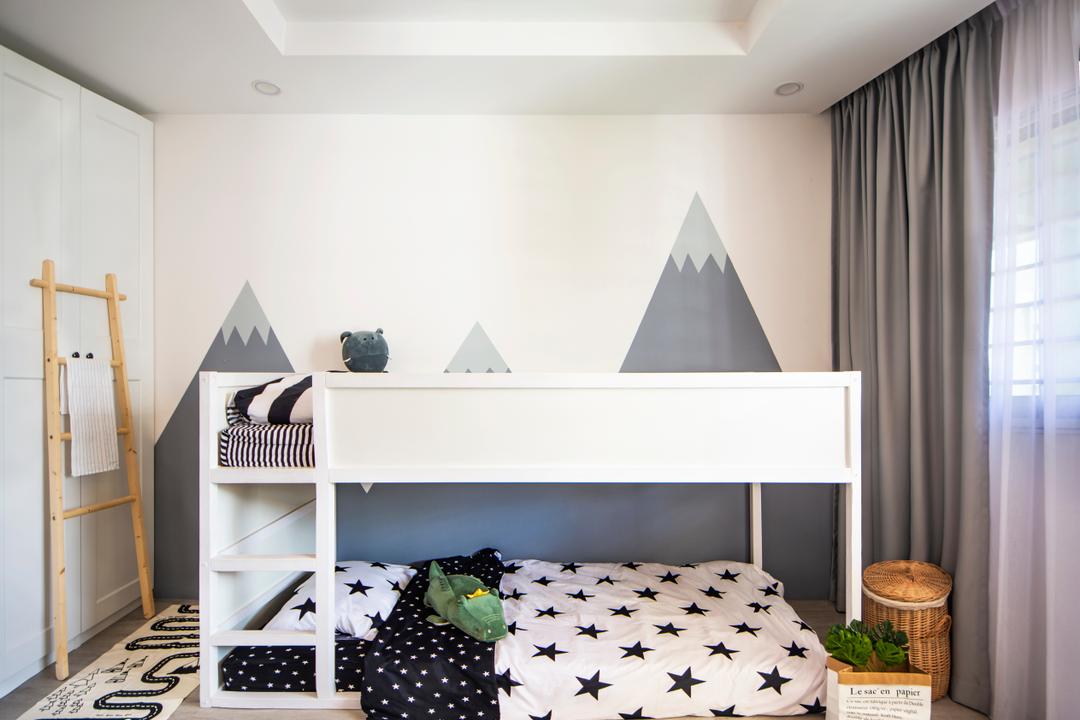 For the master, we constructed a built-in wardrobe that measures up to 4m long! We kept the polished, minimalist approach by using sliding doors and recessed handles. The master had a big hole originally (just right above the bed) for the air con duct. It didn’t really fit the aesthetic, so we had to change the piping, branching it out to the bathroom instead. 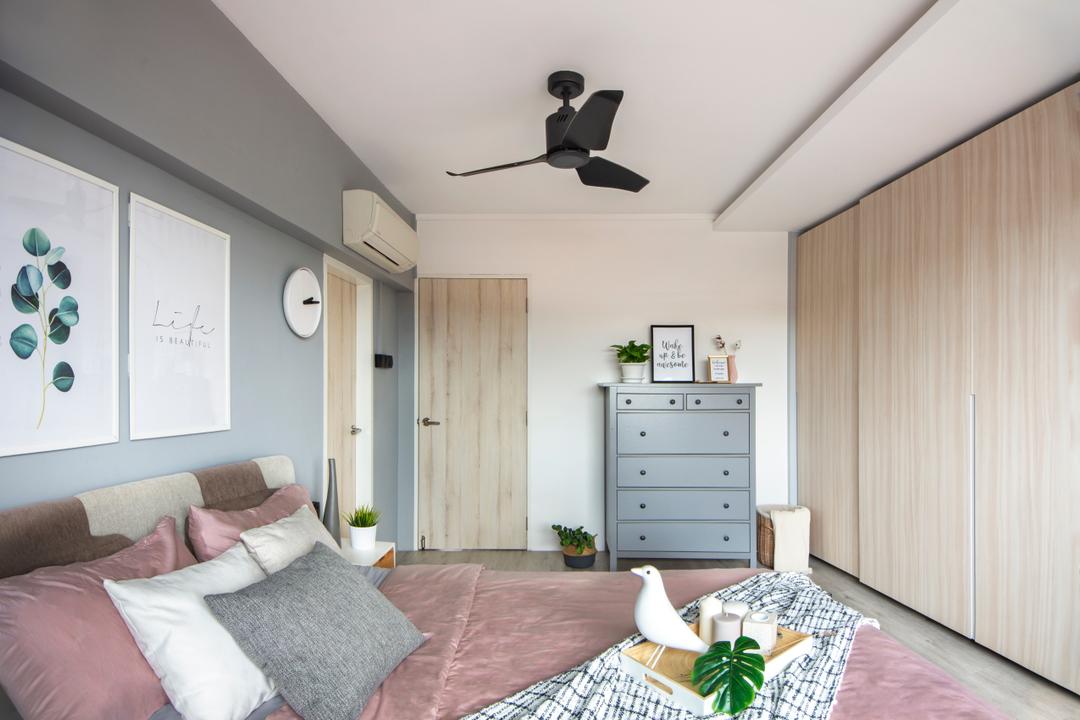 R: It was my first time renovating a maisonette – and it was quite an extensive project. I’d say that one of the challenges was the tight timeline – the scope of the renovation was varied, and we had to get everything done within two months. 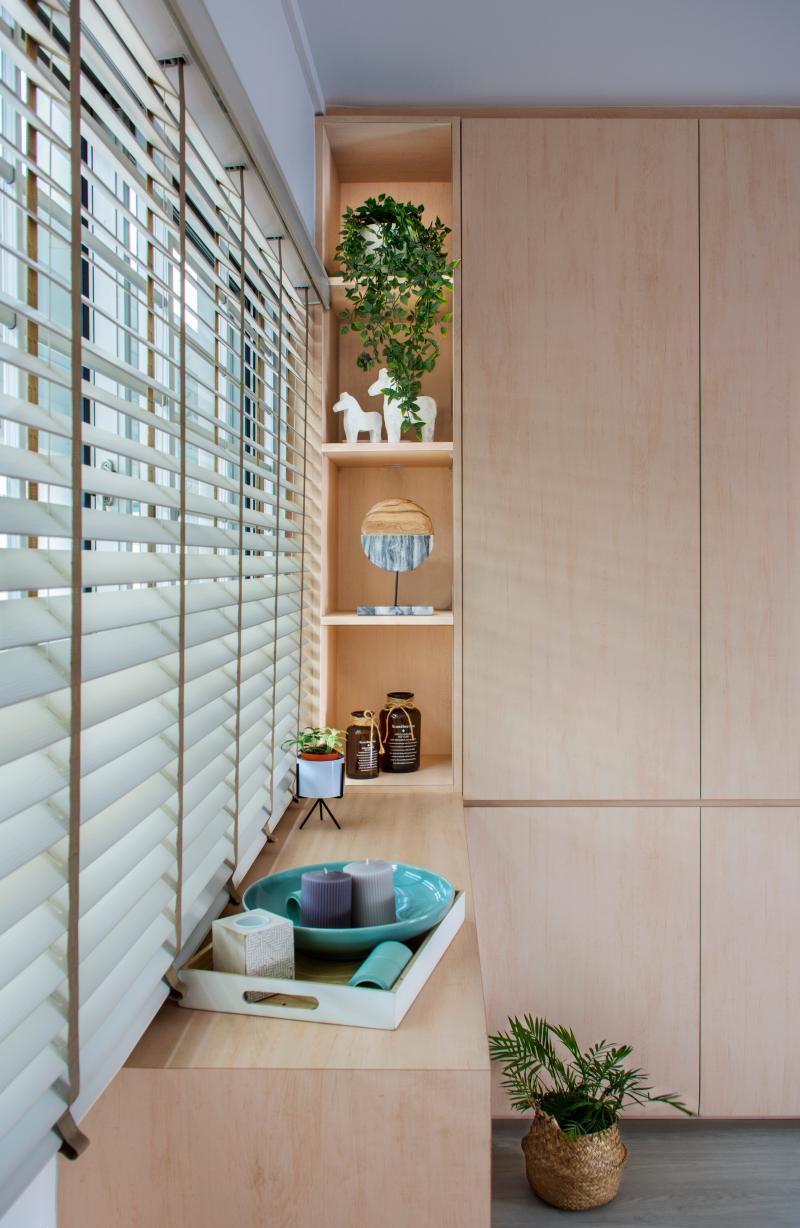 As they had to replace the water pipe, the balcony had to be outfitted with scaffolding so that was quite dangerous and scary [laughs] but I have no regrets at all, it was a good experience, filled with fun! 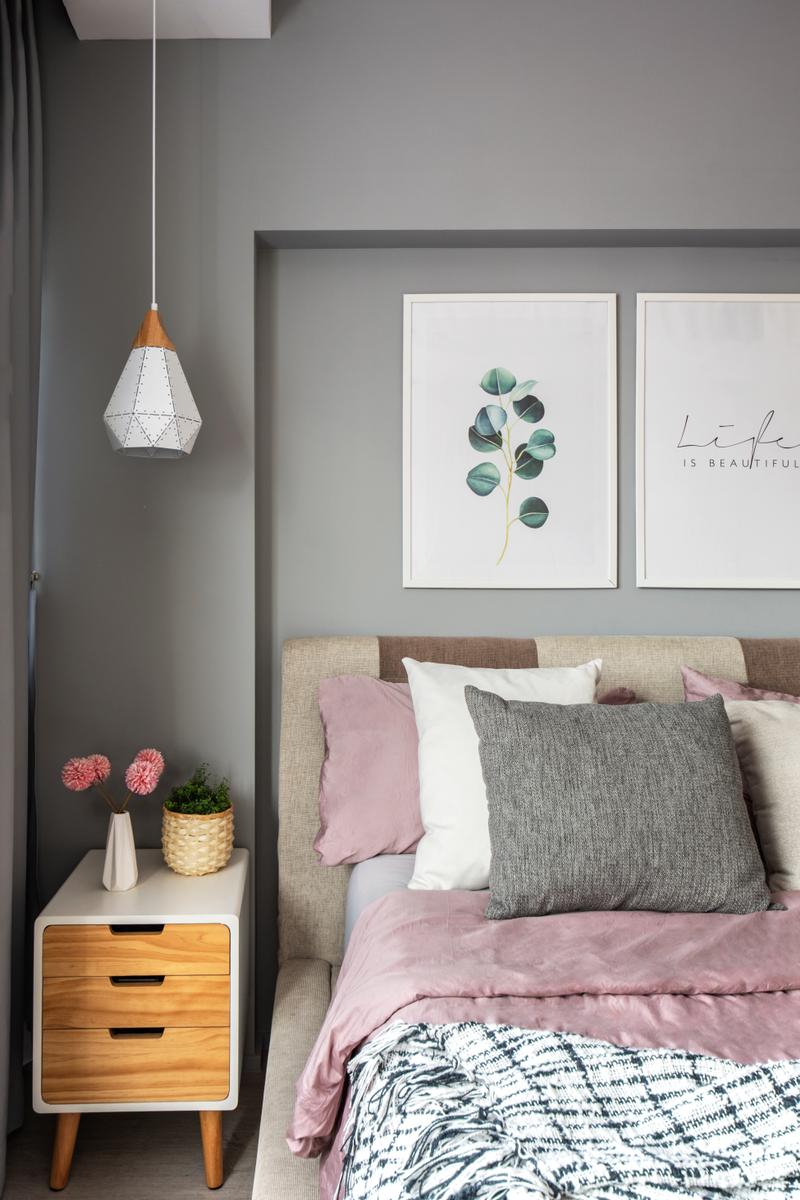 But it’s not just us offering our professional take. The homeowners themselves added a few touches – they sourced a few built-ins and fittings such as the mirror cabinet, barn-like door (concealing the common bathroom on the first floor) and black glass door with framing (in the balcony area).

Ready to transform your dated spaces? 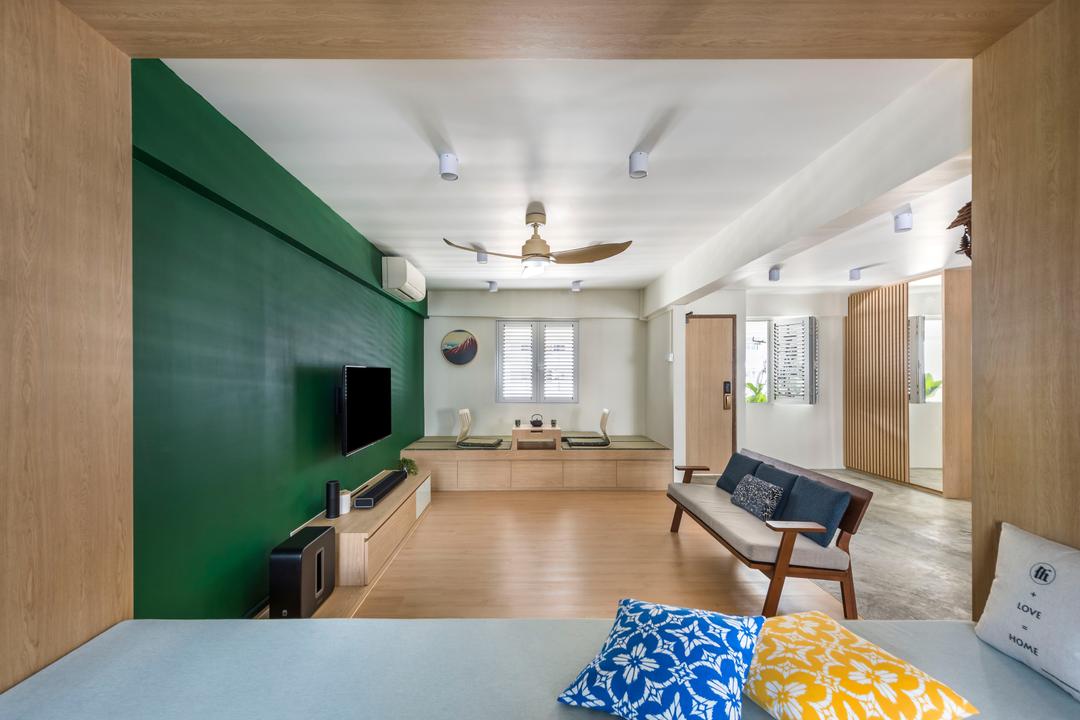 RENOVATION JOURNEY
Before-and-After: A Tidy MUJI-Style Jumbo HDB in Ang Mo Kio
Located in Ang Mo Kio, this jumbo-sized HDB flat, which belongs to a young family of four, was given a Muji-inspired minimalist revamp by D5 Studio image. 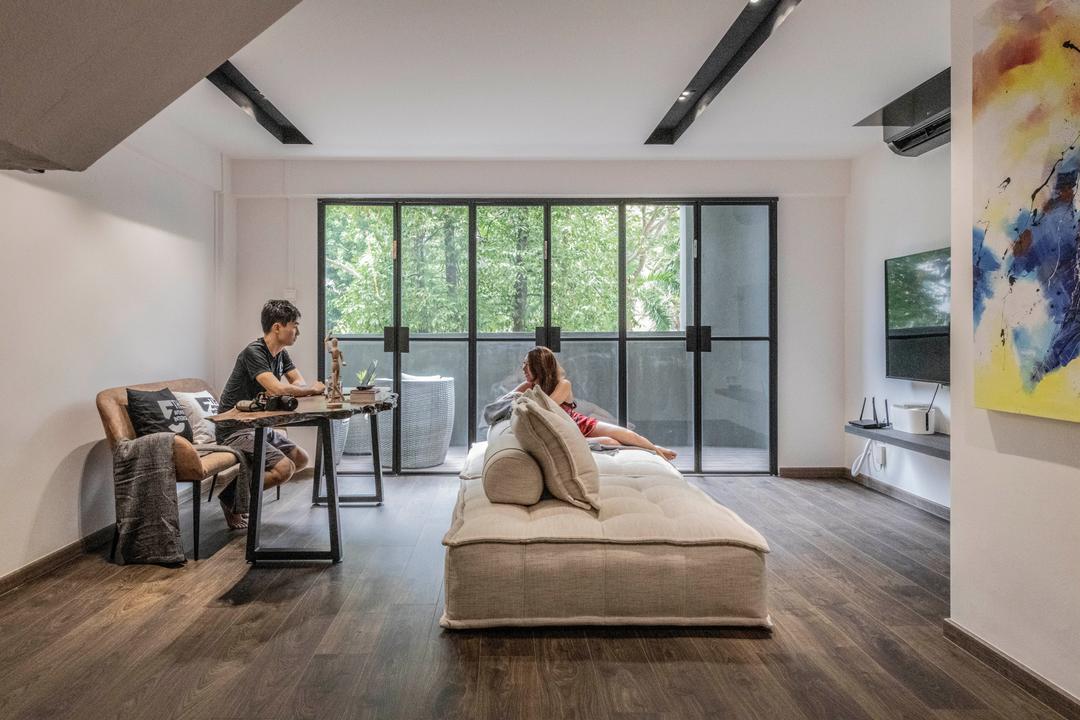 RENOVATION JOURNEY
A Time-Worn HDB Maisonette, Now an Uber-Cool Haven for Two
This isn't your typical HDB maisonette in Hougang! It has an upstairs dance studio, plus an extra-large master suite that’s the size of two regular bedrooms. 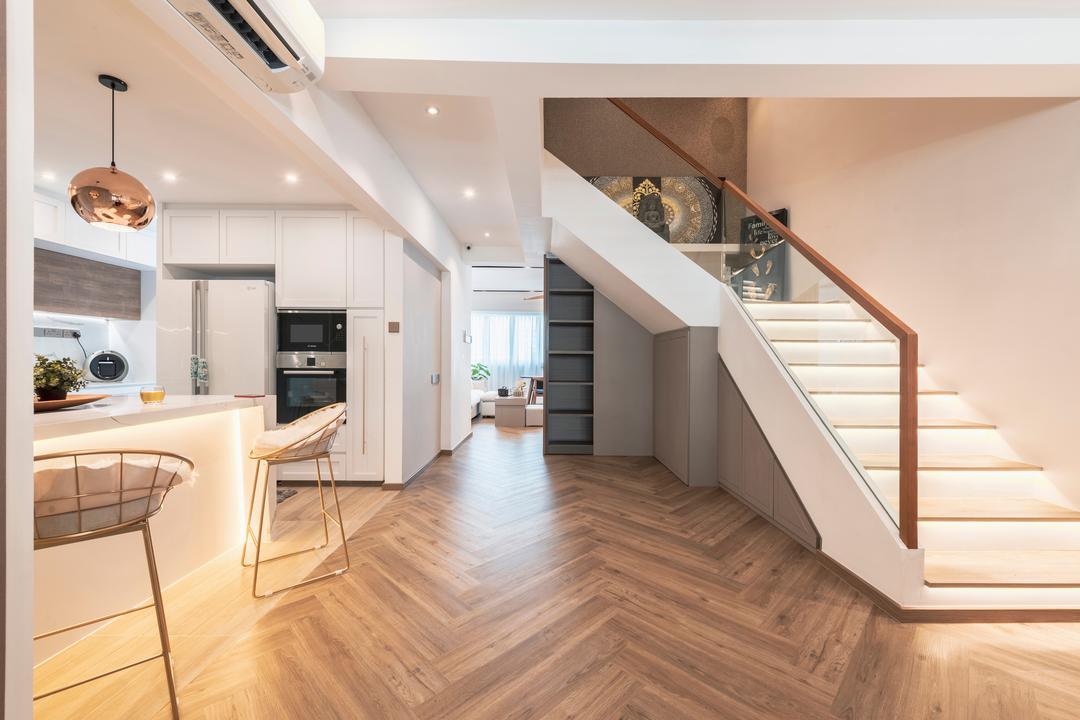 INSPIRATION
8 Maisonette Designs That Are a Step Up from Your Usual HDBs
With their spacious rooms, tall ceilings, and indoor staircases, these homes show why maisonettes are everyone’s dream HDB flat.
Preparing the next article…
Recommended for you