A Winning Combo: Storage and Functionality Score in This HDB

Dark, dramatic colours, and lush greenery abound in this HDB home – talk about great ways to leave an impression.

Because Singapore’s homes are generally on the smaller side, homeowners tend to avoid using too dark colours for fear of making the space seem even tighter. However, this family decided that to ‘wow’, they had to take bolder measures. 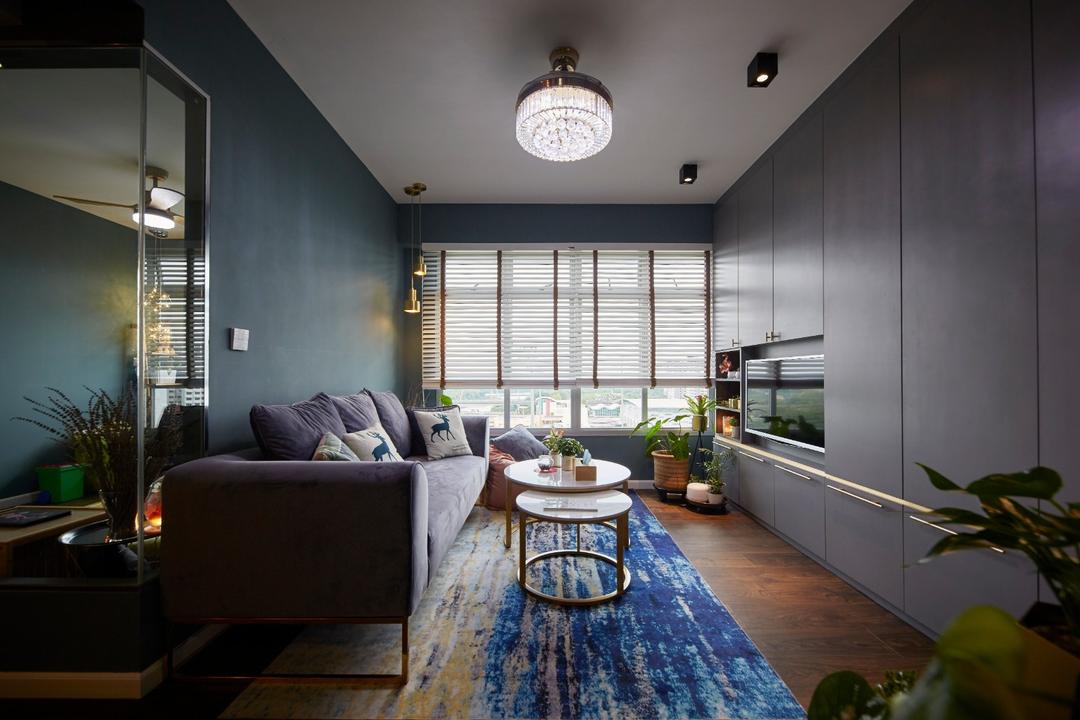 “Though the homeowners wanted to leave an impression,” shared designer Franciso Thng, who was tasked to come up with a standout look for the 4-room BTO flat. “They also live here with their three children – with five people in total, we had to make the space functional for everyone as well.”

Scroll on to find out how Franciso kept things practical even as the home took on a distinctive moody glam look.

Franciso (F): Because there were so many people in the home, maximising storage became a huge priority for them. Other than that, they were open to exploring different interior ideas in order to achieve that ‘wow’ factor. 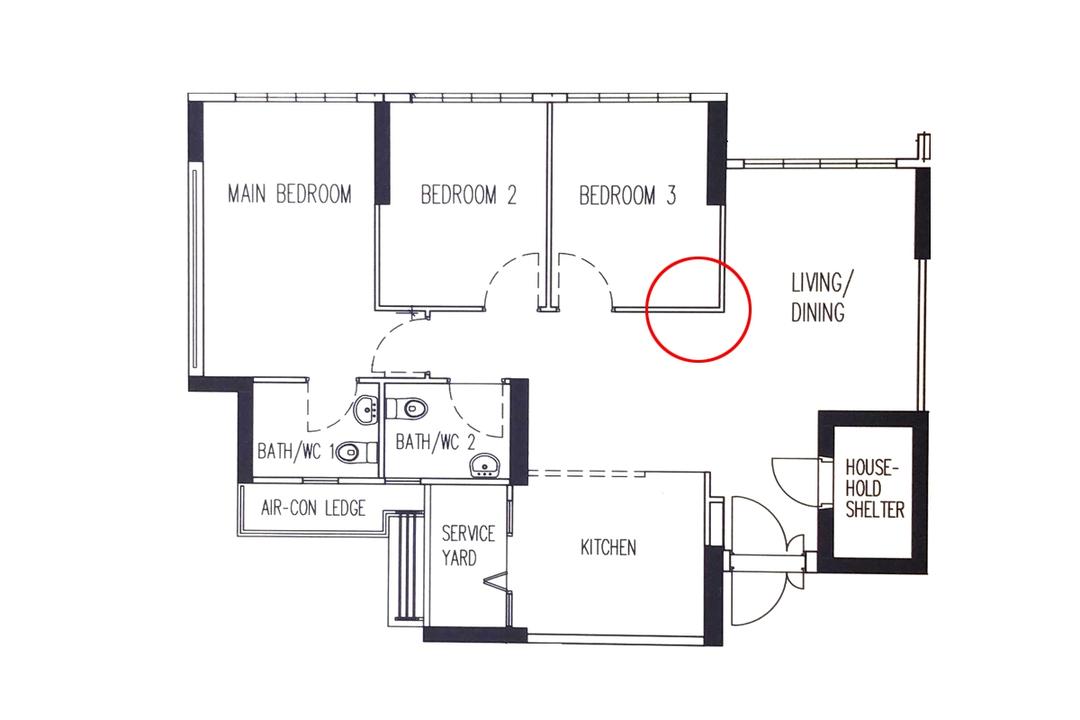 The red circle indicates where a wall was hacked down.

So, I proposed using darker colours to add a dramatic touch, and also to play off their collection of plants – because the space does have a moody glam look, we had to find ways to reintroduce some light as well.

F: The living area, kitchen, toilet and study room changed the most. As their main concern was storage, a lot of carpentry was customised for each area (except the study) of the home; take for instance, the living room’s feature wall – it’s cabinetry that spans from the ceiling to floor. 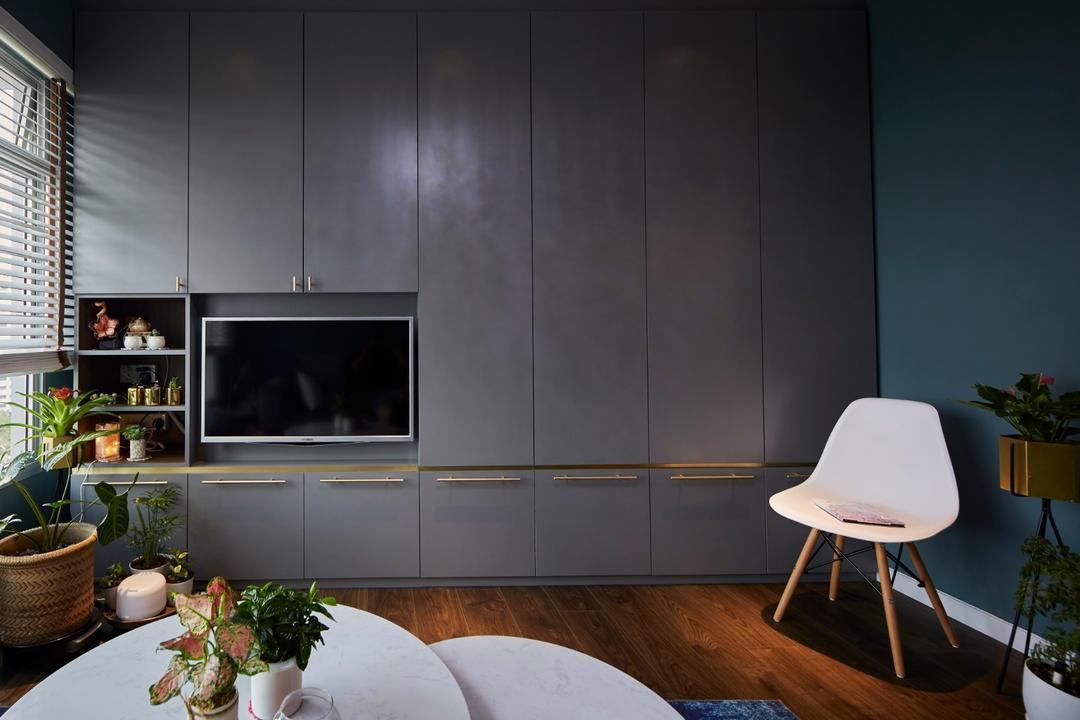 F: Since creating a home is all about cohesion/tying the look back together, we tried not to vary the shades too much – that’s why a darker wood-look vinyl was used for the floor with similar wood tones for the kitchen countertops. 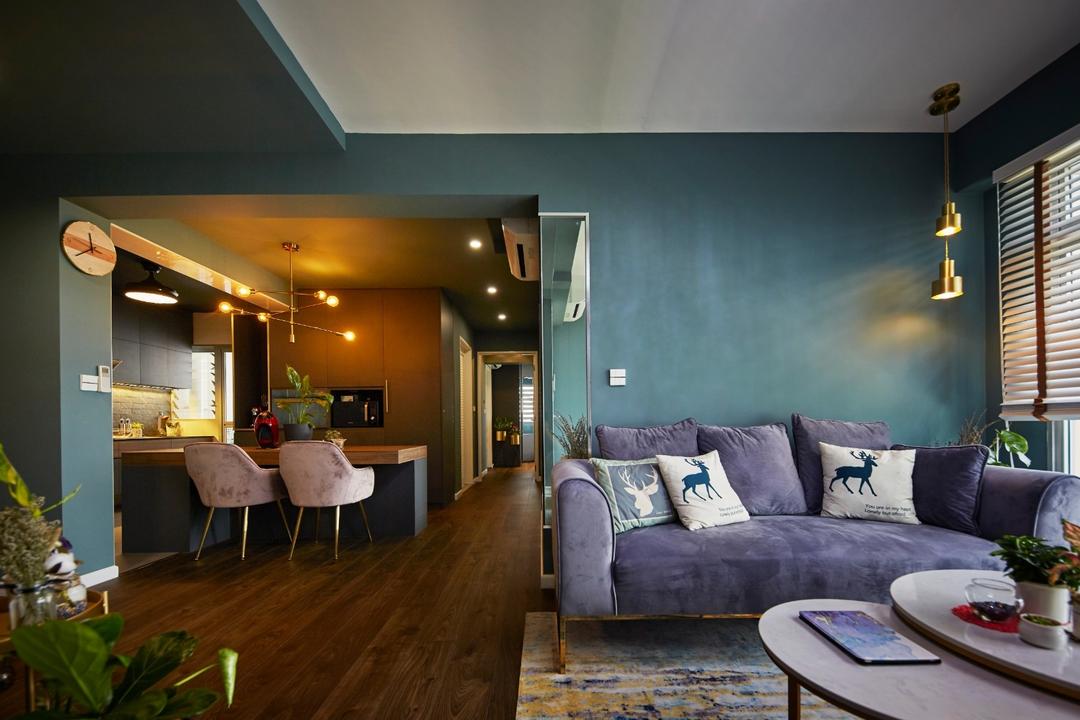 F: We transformed the area near the kitchen as well, outfitting them with a row of cabinets. However, the change made the entryway a whole lot narrower as well. Because the space was tighter, we found that off-the-shelf dining tables weren’t able to fit into it. That’s why we built one from scratch for the family instead. 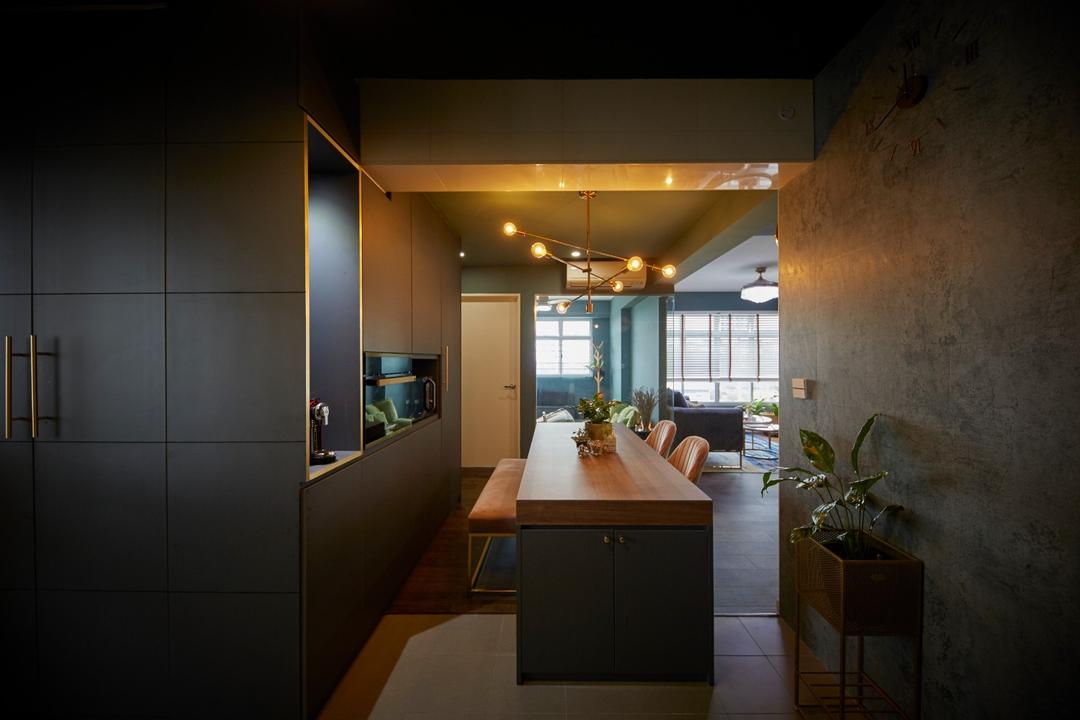 The dining table also has additional storage and sockets built in.

F: Like how the living room’s feature wall had a space to mount a TV, we sort of created an opening in the cabinetry to store a coffee machine. I had that compartment outlined in gold trimming because I wanted to draw attention away from the beam. 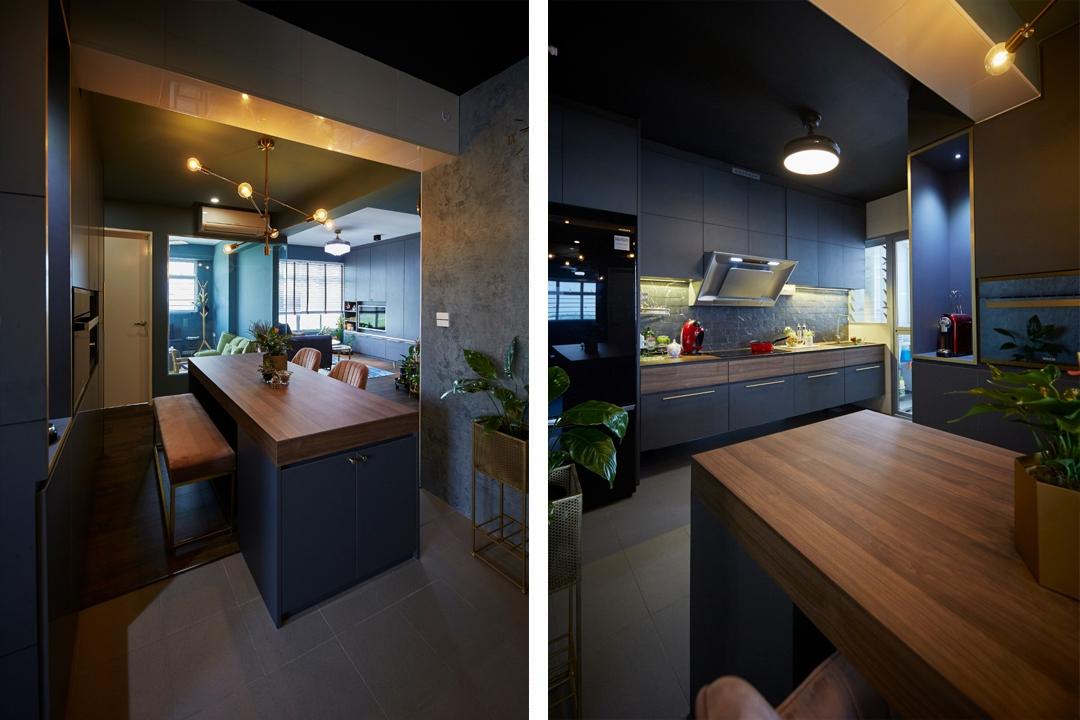 F: We used pattered subway tiles for the backsplash – because they’re rather distinctive-looking, it’ll be a mistake not to highlight them. By installing lights under the top hung cabinets, we managed to bring out all the details. 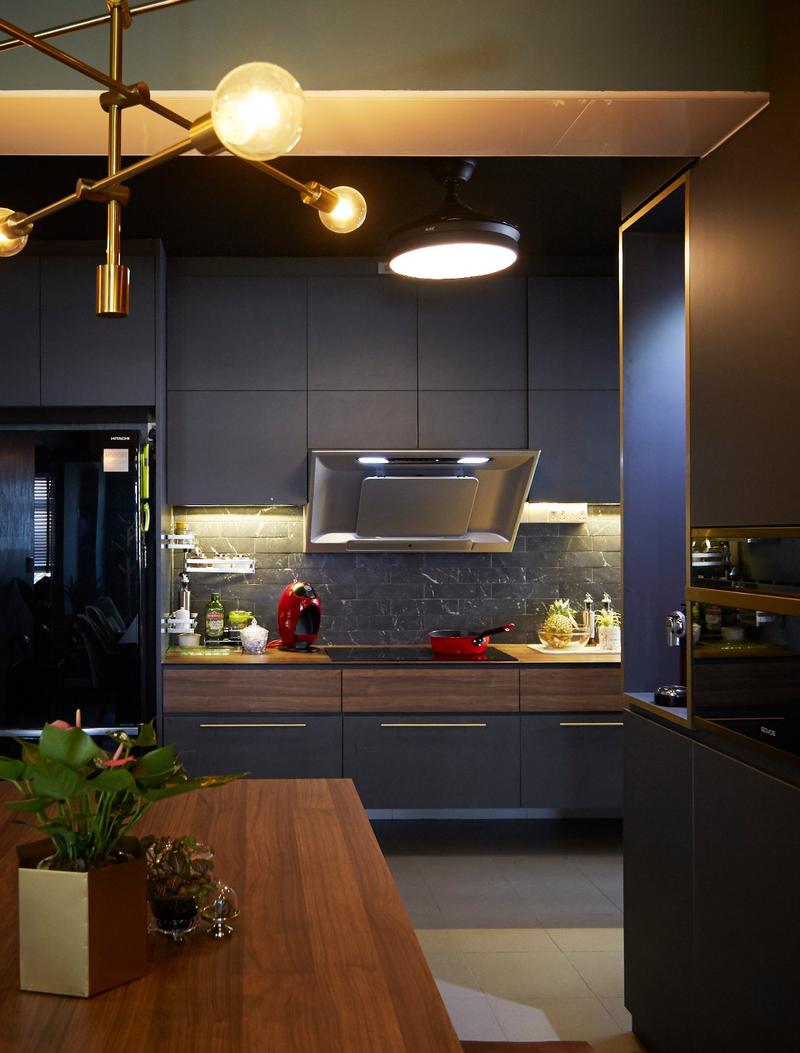 Both the dining table and countertops on the floating kitchen cabinets feature wood-look surfaces for a more cohesive feel.

F: Despite the home’s colour palette, it never comes off as too claustrophobic and that’s largely due to the glass panel that we installed in the study. Though we took down a bit of the wall, this one change really expanded the living area as it lets in a lot of natural light that brightens up the space. 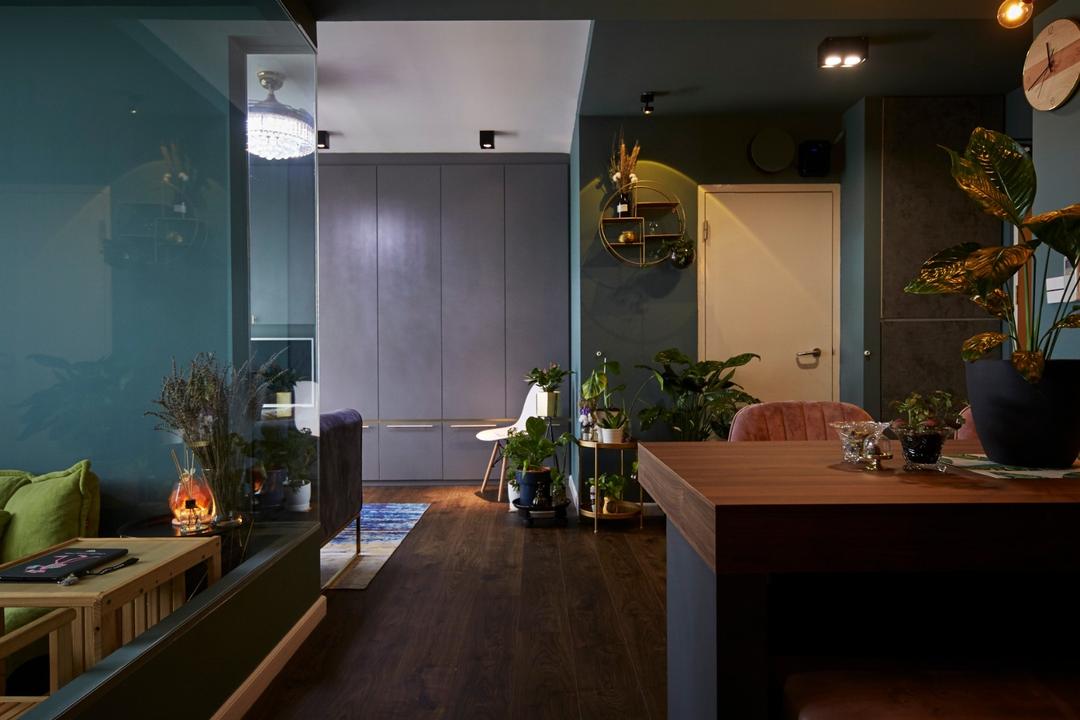 F: The study isn’t just a study though, it’s also the children’s playroom. The room doesn’t have that many built-ins because it’s easier to keep the furnishings loose. This way the family can configure the space according to their preference. 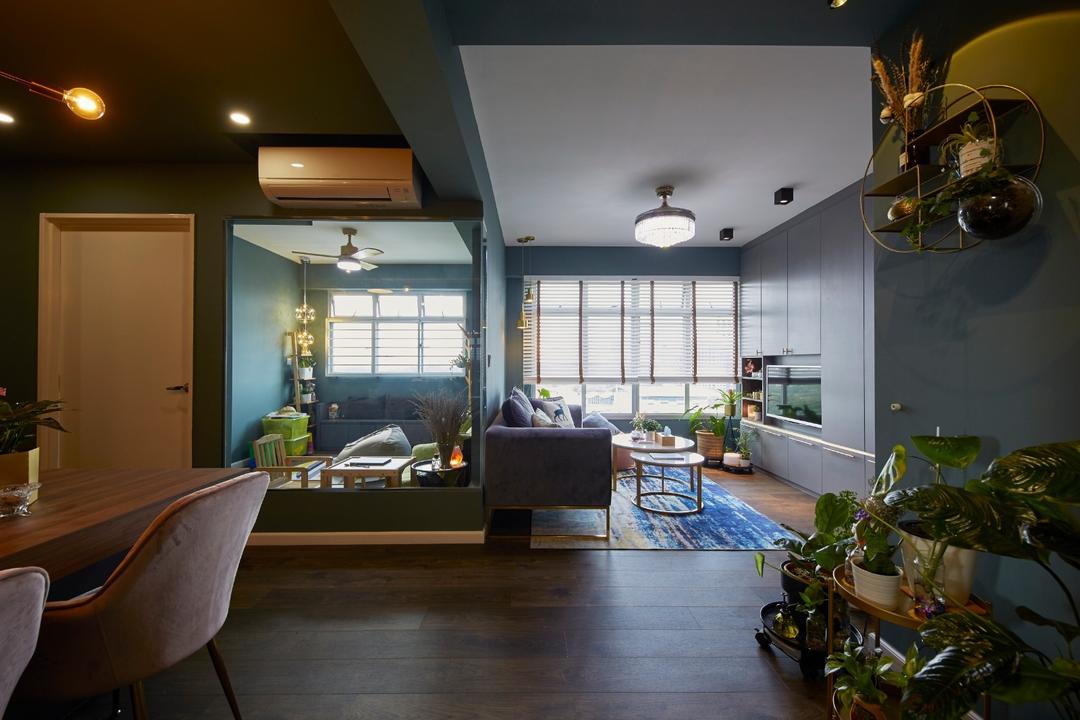 F: While there’s not much work done for the master bedroom, the homeowners had bought a storage system, and that led us to customising a chamfer edged wardrobe to keep it out of sight. 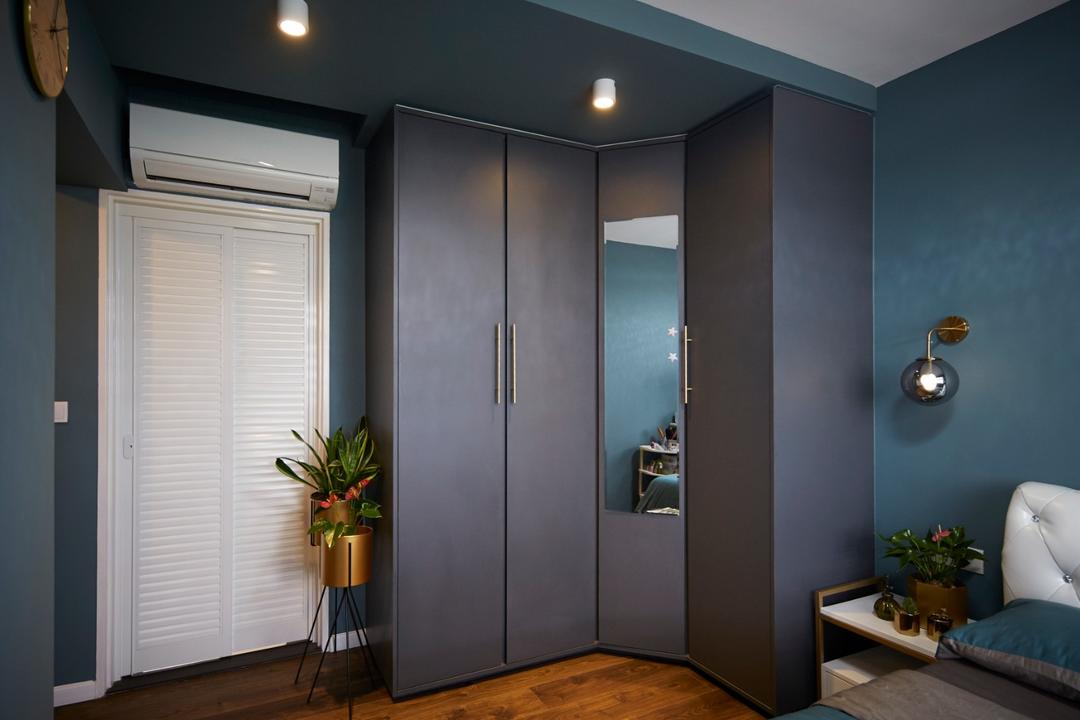 F: Both bathrooms have a different look about them – the common is much brighter because it’s intended for their children’s use, while they kept theirs (the master en suite) to a darker theme that’s similar to other areas of the home. 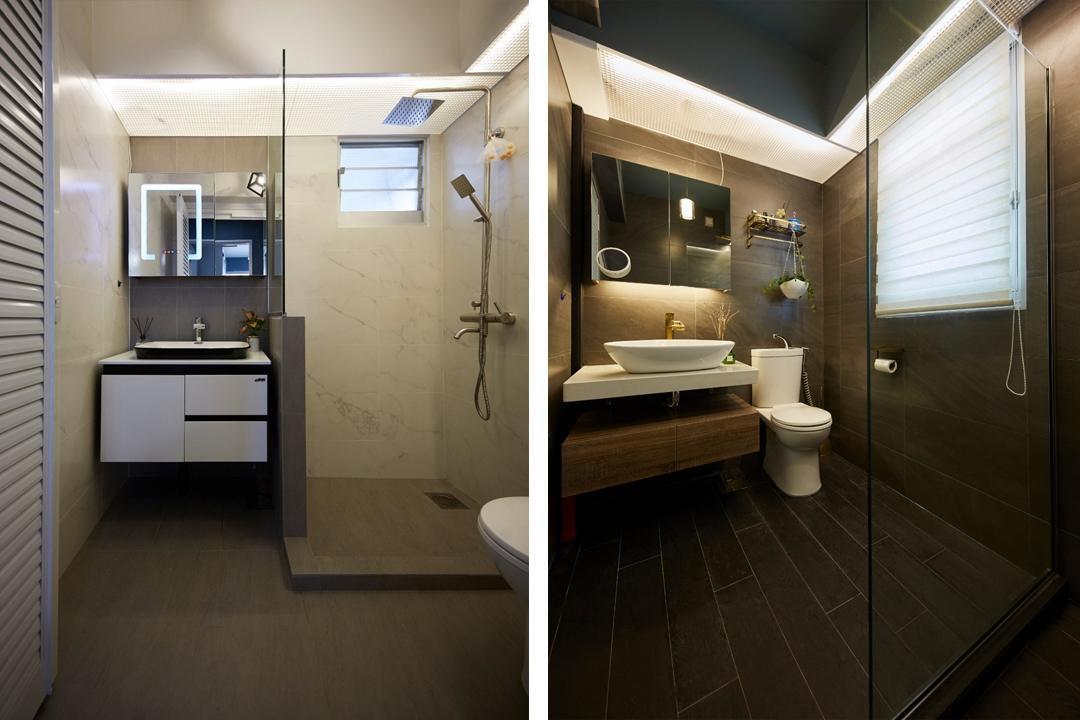 F: They managed to find a lot of accent pieces on Taobao – most of the gold accessories, and the cabinetry’s handles were bought online. In fact, the concrete screed-look wall that’s in the kitchen? It’s actually a wall covering that they bought off of Taobao too. 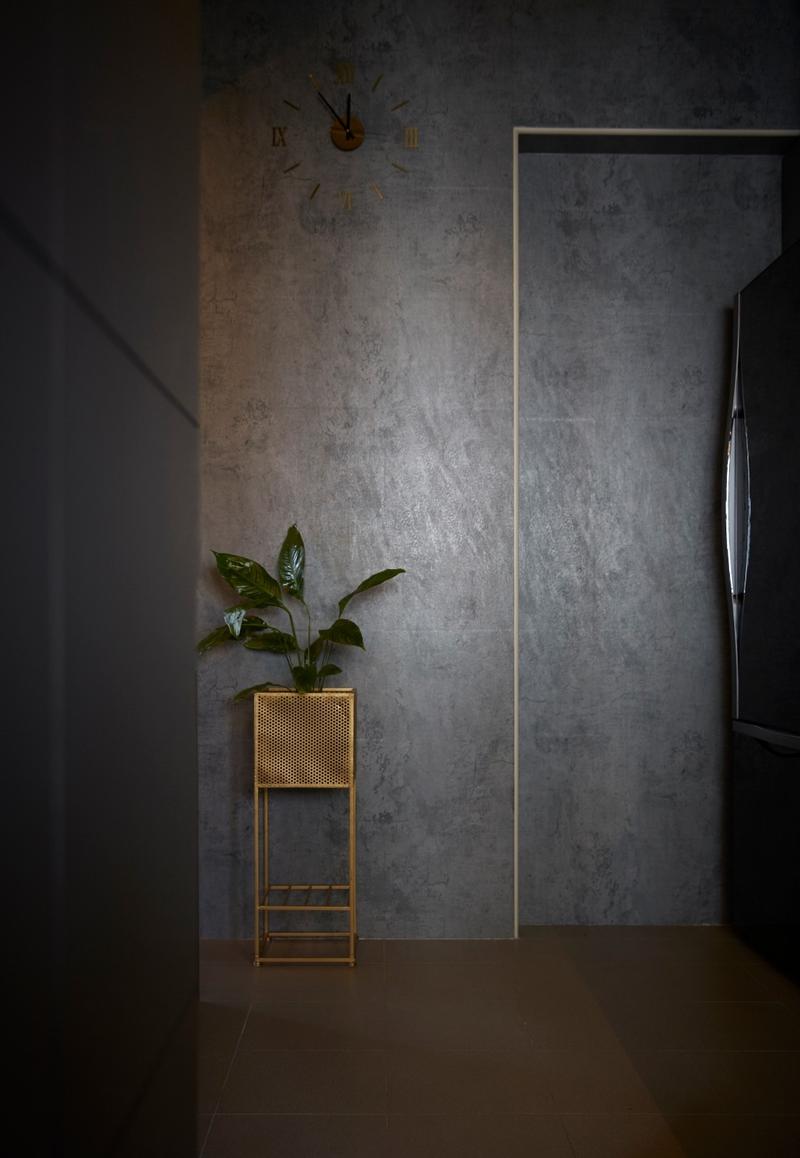 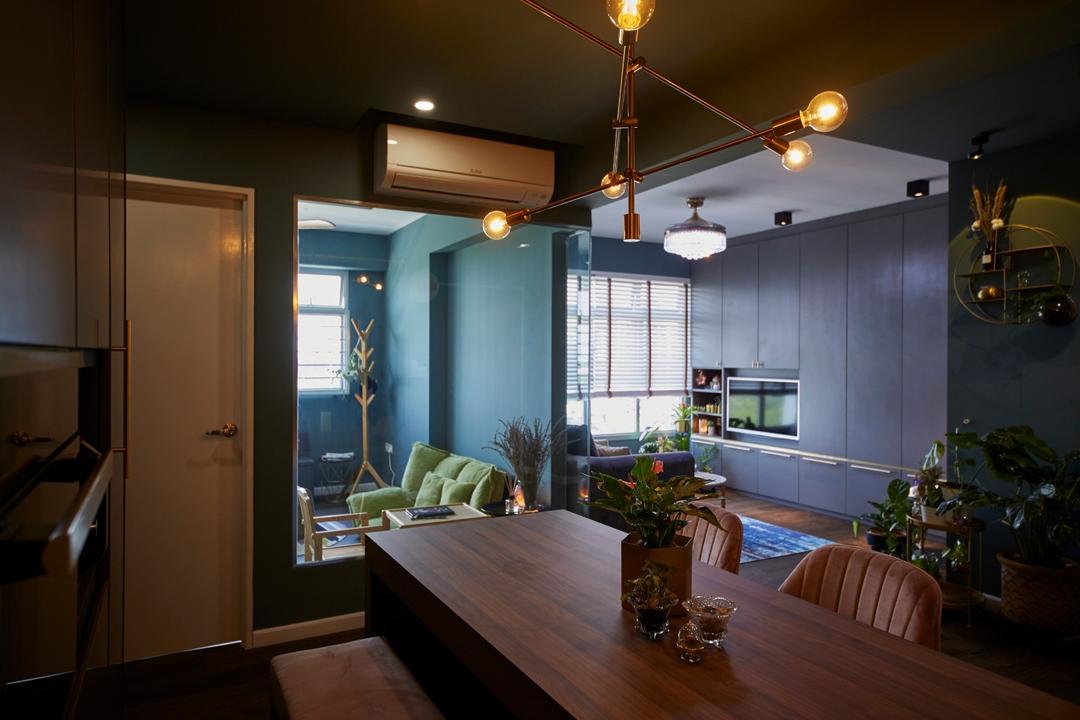 F: Aside from their storage requirements, the homeowners didn’t really have a preference, which allowed me to really build a space that’s different from the standard and cookie-cutter. So, sometimes being open to ideas and taking a leap of faith could give you really great design results.

Put your own twists into your home's design!

Let us know to your renovation requirements and get quick, personalised renovation quotes from five local interior design firms, for free!

RENOVATION JOURNEY
This Extra-Roomy Flat Feels Way Larger Than 90 Square Metres
It's all thanks to its space-maximising layout from 2000, and some clever demolition works that created long stretches of space in the kitchen and bedroom. 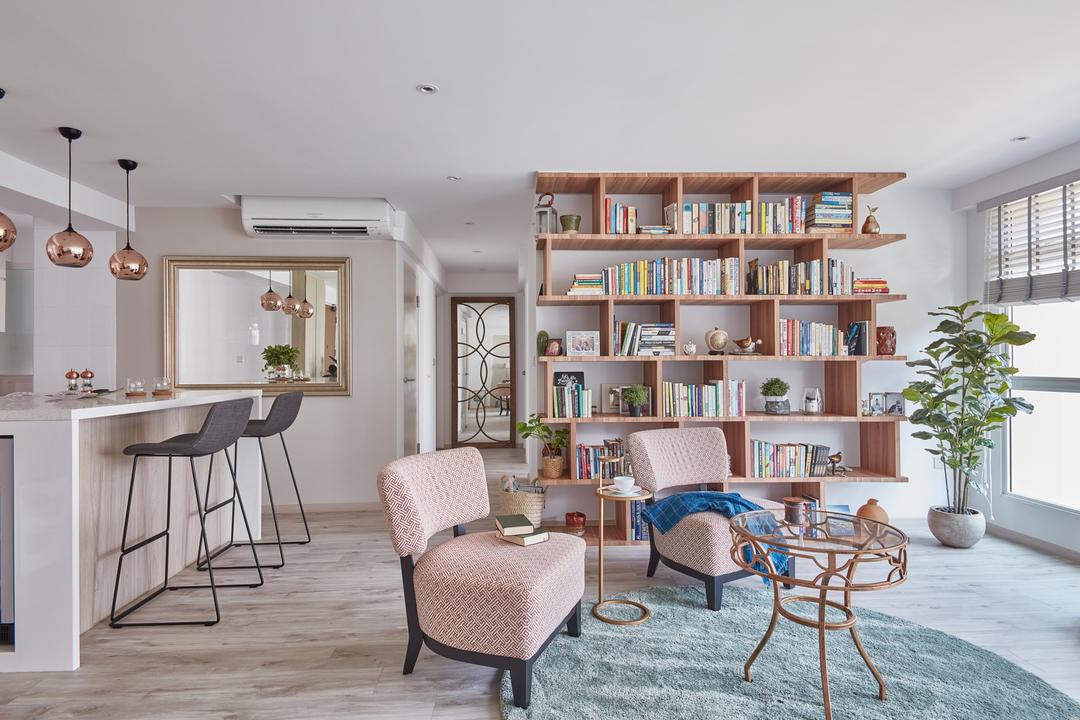 RENOVATION JOURNEY
A Flat with a View Led to This Open, Nature Lovers’ HDB Home
Wanting to make use of the view from their Edgedale Plains home, this couple brought in natural elements and earthy neutrals to create their ideal abode. 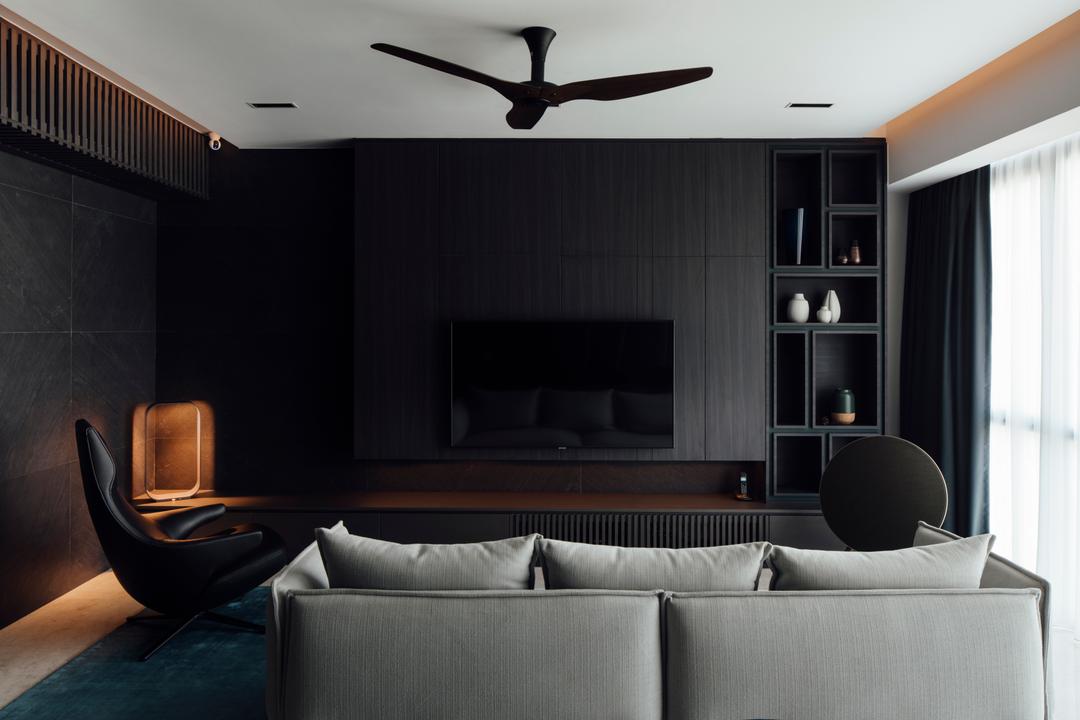 INSPIRATION
10 Dark Homes That Nail the Luxe and Cosy Look Effortlessly
If you’re planning to design a dark home, here is some inspiration on how to create one that’s as black as night (but also, as bright as light when you need it to be).
Preparing the next article…
Recommended for you 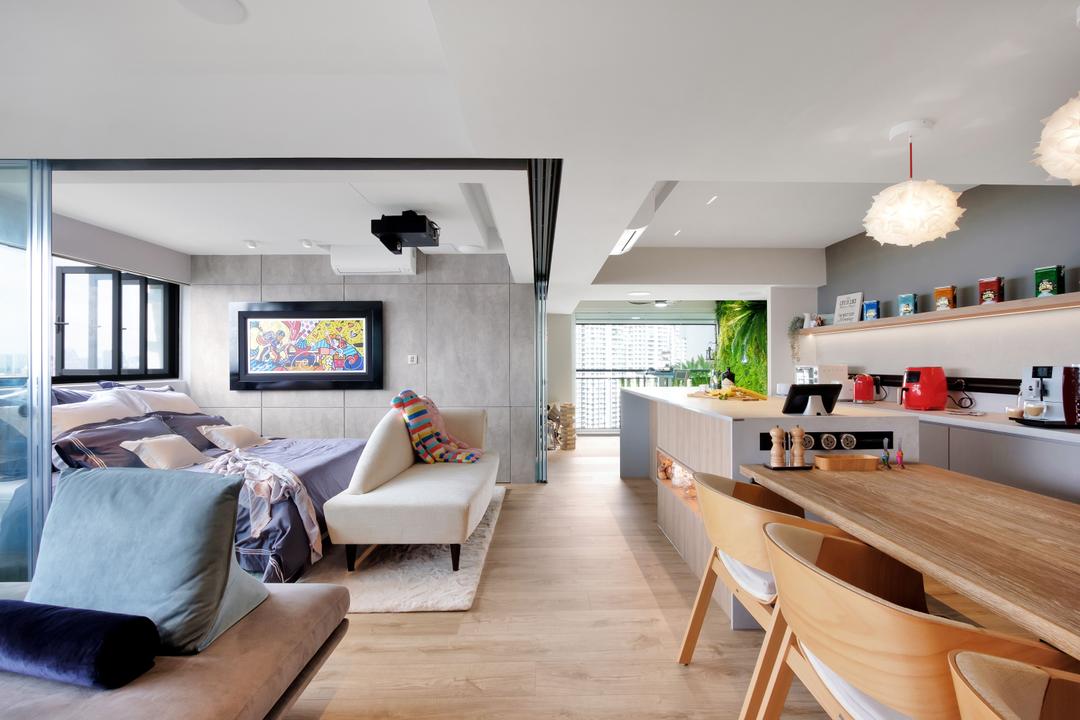