We let our survey results speak for themselves. 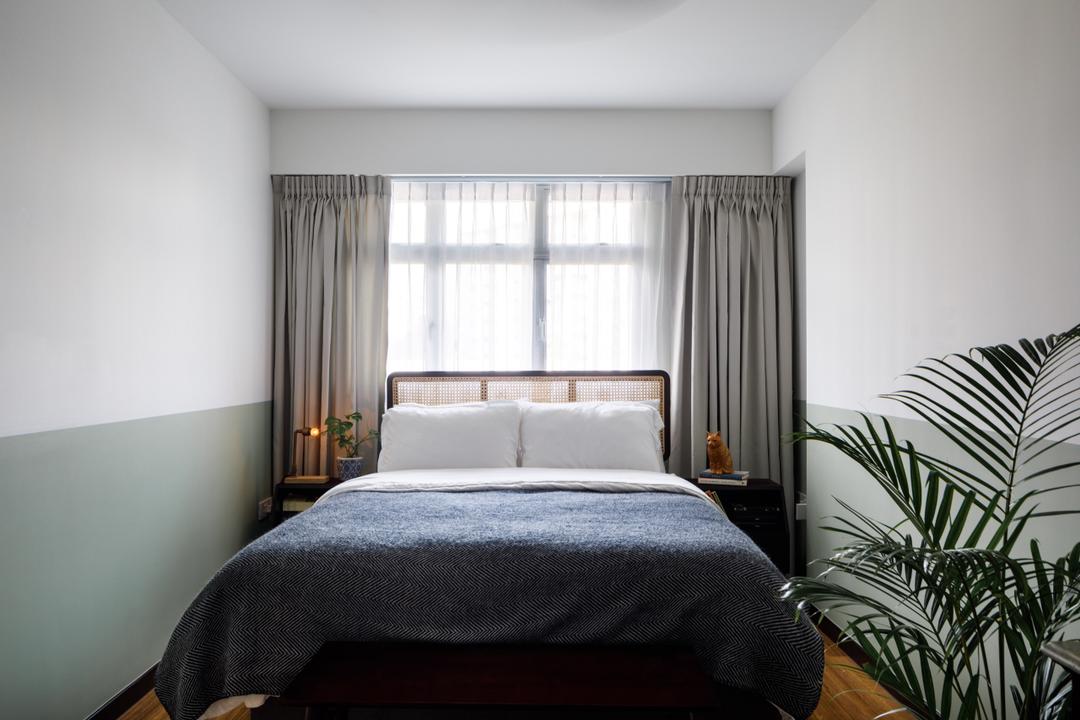 And while some of these gender clichés concerning design choices/renovation decisions do hold true, it also turns out that there’s plenty in common between the sexes, both in terms of their renovation preferences and roles played.

Most Singaporean men and women have similar colour preferences and paid equally for their home renovation.

Earlier in September this year, we conducted a simple online survey involving 182 participants and it turned up a number of interesting findings, chief of which was that Singaporean men and women shared a common love of nudes (no, not those kinds of nudes), such as beige, taupe, pale pink. 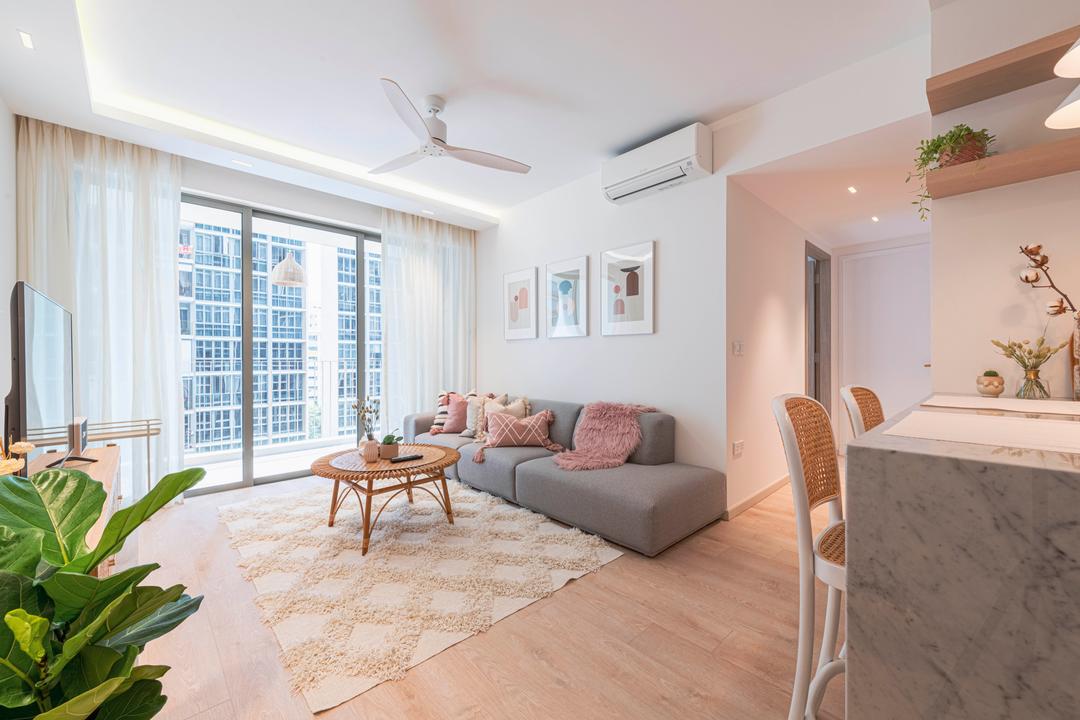 Other than that, when it comes to forking out for home renovation expenses, the majority of male and female respondents (68% and 69% respectively) said that the bill was split equally between them and their spouses. 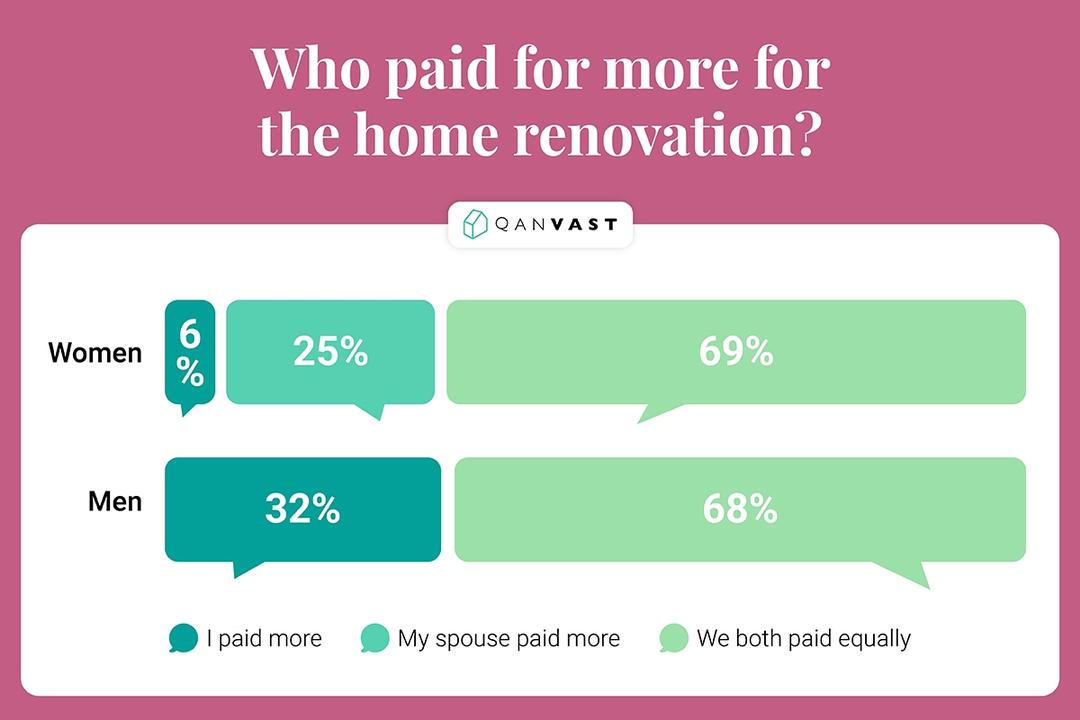 One common response (and possible explanation) for this trend is that couples saw their homes as shared spaces, and that they had equal responsibility, regardless of individual earning power.

While we can’t answer the age-old debate on whether boys are better than girls at math, we can tell you that husbands tend to stand up and take charge more often than their wives in crunching the numbers. 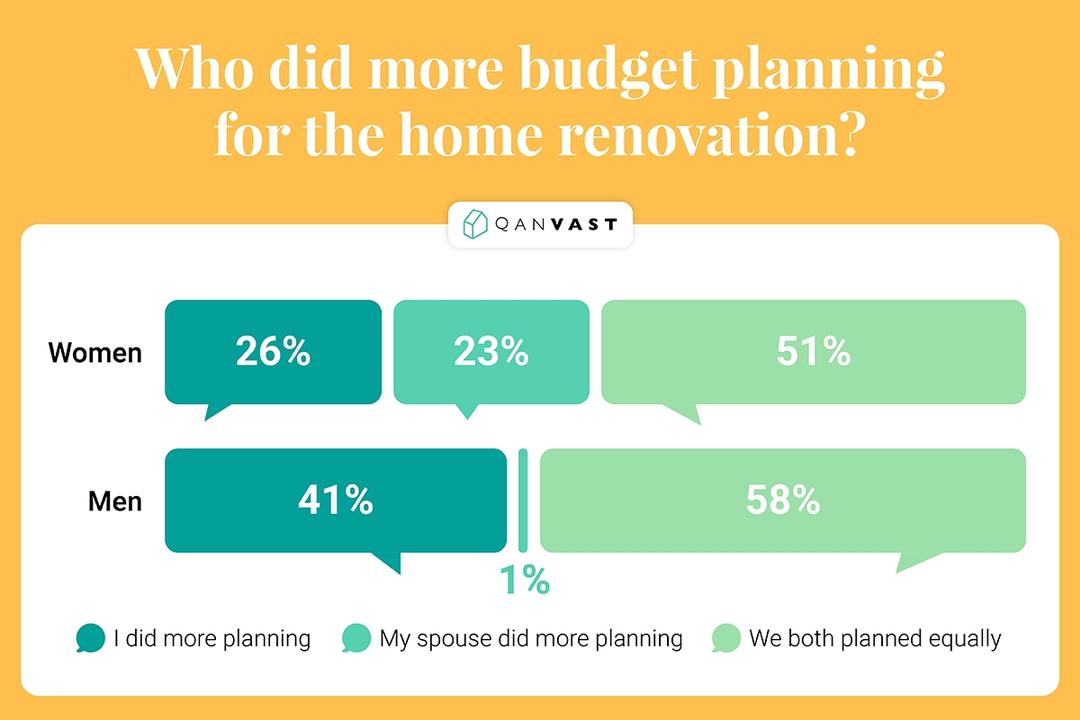 41% of the male homeowners we surveyed felt that they contributed more to the budget planning aspects of their renovation than their female partners did, whereas 26% of women said the same.

2. Men tend to do less renovation research than their female partners

However, when it comes to doing the research for their home’s renovation, men are less likely to contribute than their female partners. 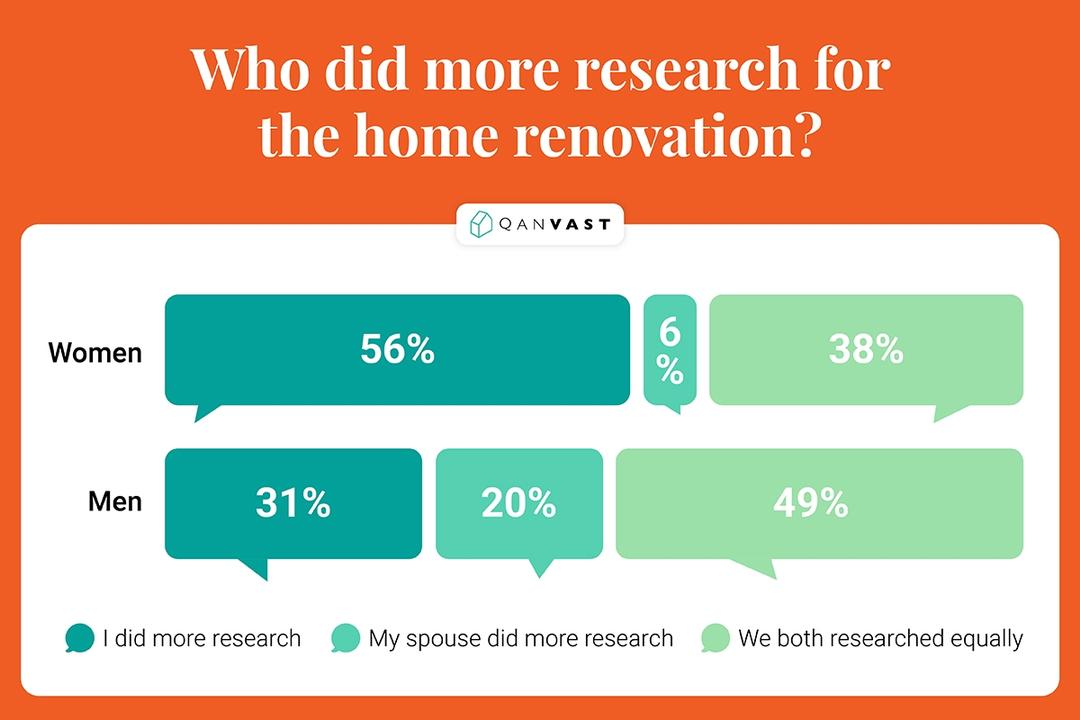 56% of female respondents admitted that they played a bigger part in doing the homework than their partners, whereas only 31% of male respondents said the same. But that’s not to say that men are entirely uninterested, as a common response from wives was, “I am just more into it than he is”.

3. Other than nudes, Singaporean men and women also share a love for muted tones and monochrome colour schemes

Remember that both local dudes and dudettes rated nudes as their top colour combination? What’s even more surprising is that they share the same top three favourites as well. 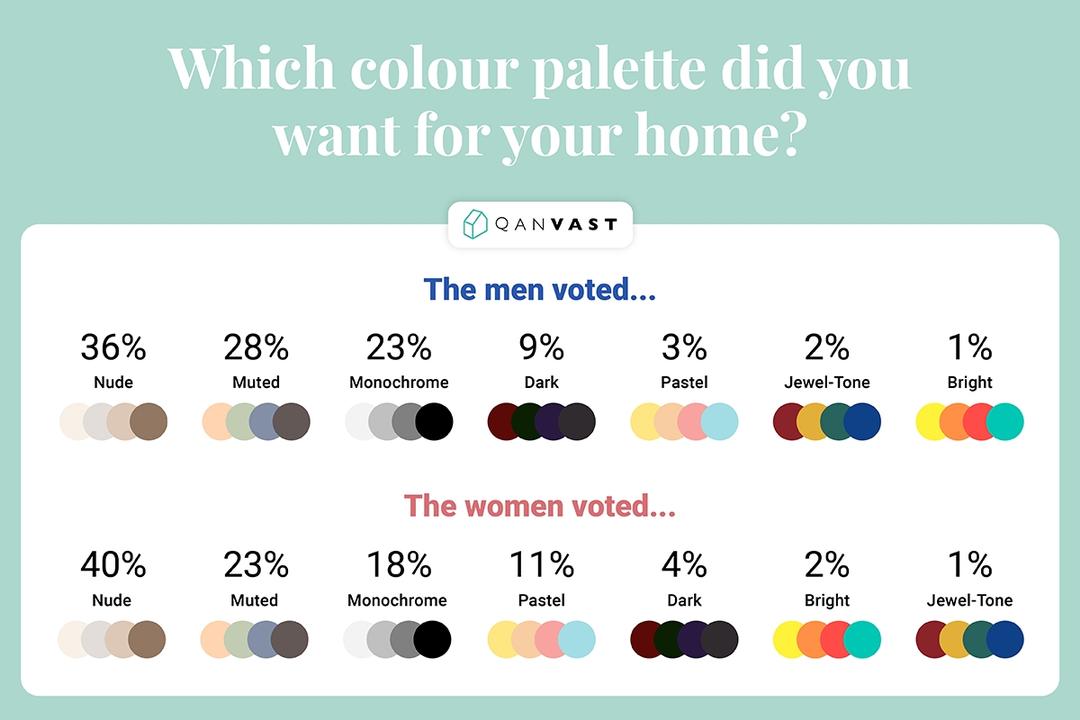 Muted tones together with monochrome ranked highly for both genders, and that’s a good sign because it’ll be easy for couples to settle on a colour scheme that they both like. Probably.

4. Everyone enjoys coming up with ideas!

Although the top vote went to different options for both male and female respondents (‘working out the budget’ and ‘furnishing and decorating the home’ respectively), one thing that men and women both enjoyed equally was coming up with ideas. 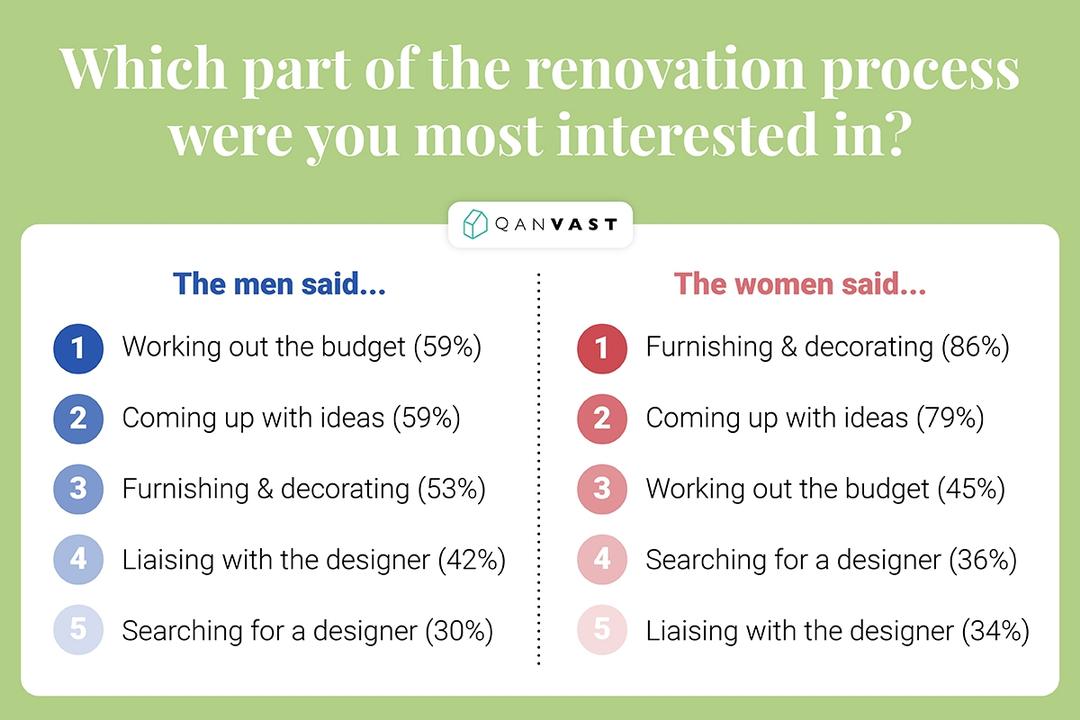 But that’s sort of a given, isn’t it? After all, home isn’t home, unless it’s a reflection of you, your thoughts, and your aspirations.

… And if you want an easier time looking for a renovation professional.

Another observation that we made from this survey was that ‘searching for a renovation professional’ was an activity that both men and women (ranked 5th and 4th respectively) were less keen on – and that’s where we come in! 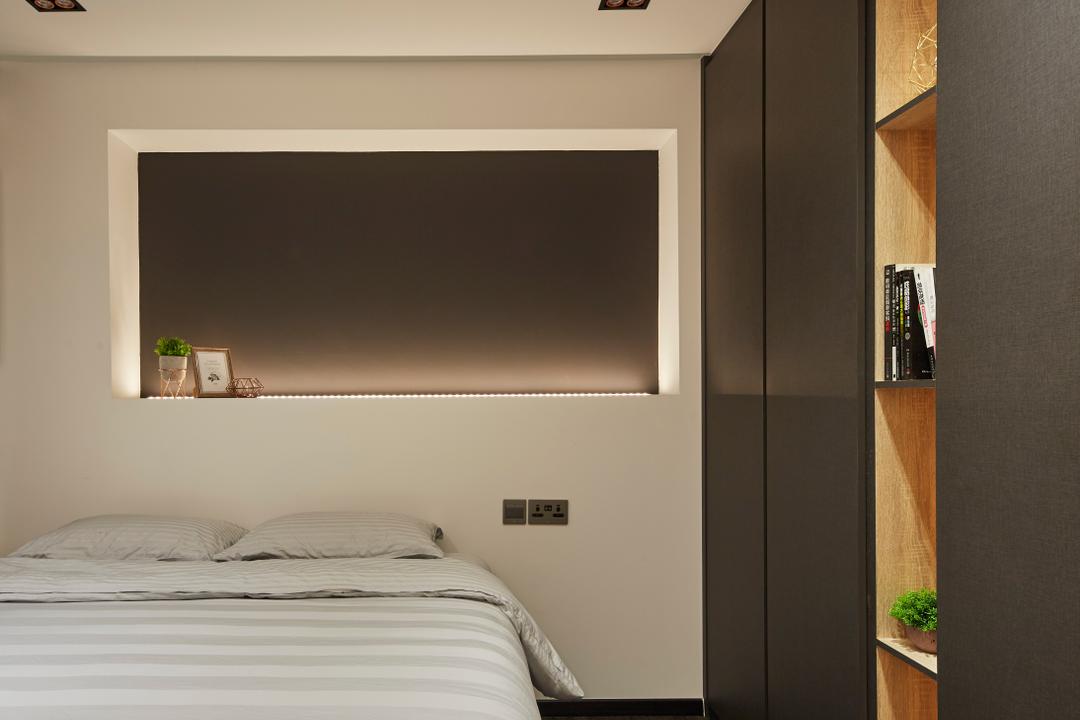 Just let us know if you’re making over your home, and we can get you quick, personalised renovation quotes from five local firms for free! Also, by using our recommendation service, you could get perks like the Qanvast voucher kit and the free Qanvast Guarantee service that safefguards your renovation deposits. 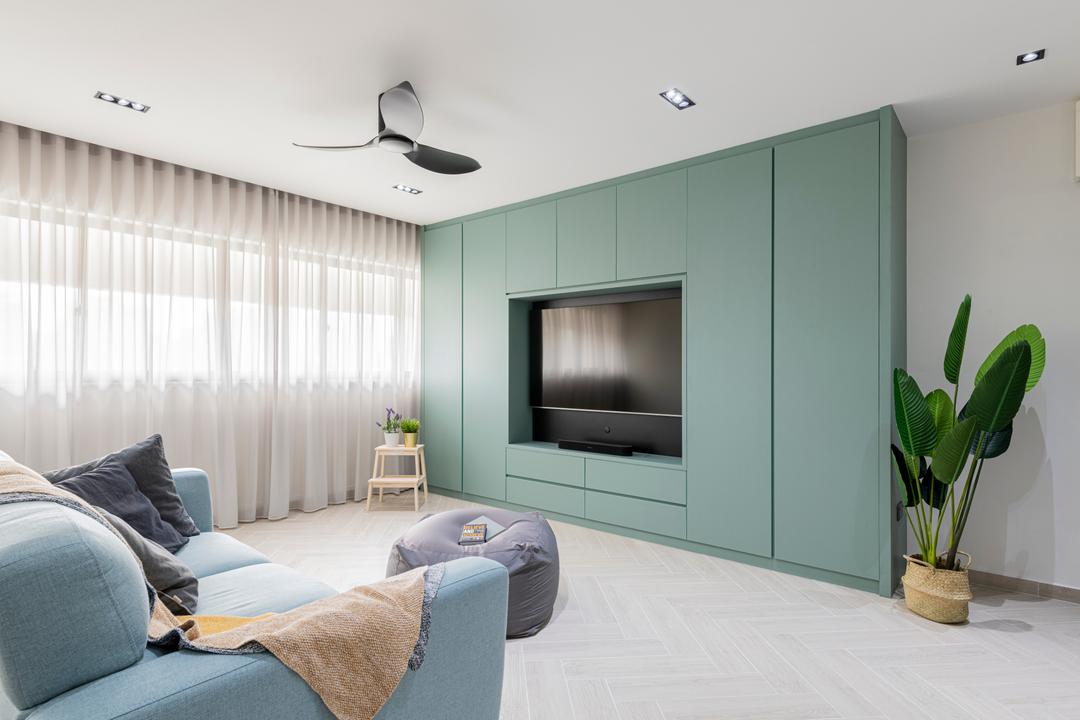 BUDGETING
How Much is a 3, 4, and 5-Room HDB Flat Renovation in 2019?
We crunched the numbers! Here’s how much it costs to renovate new and resale 3-room, 4-room and 5-room HDB flats in Singapore these days. 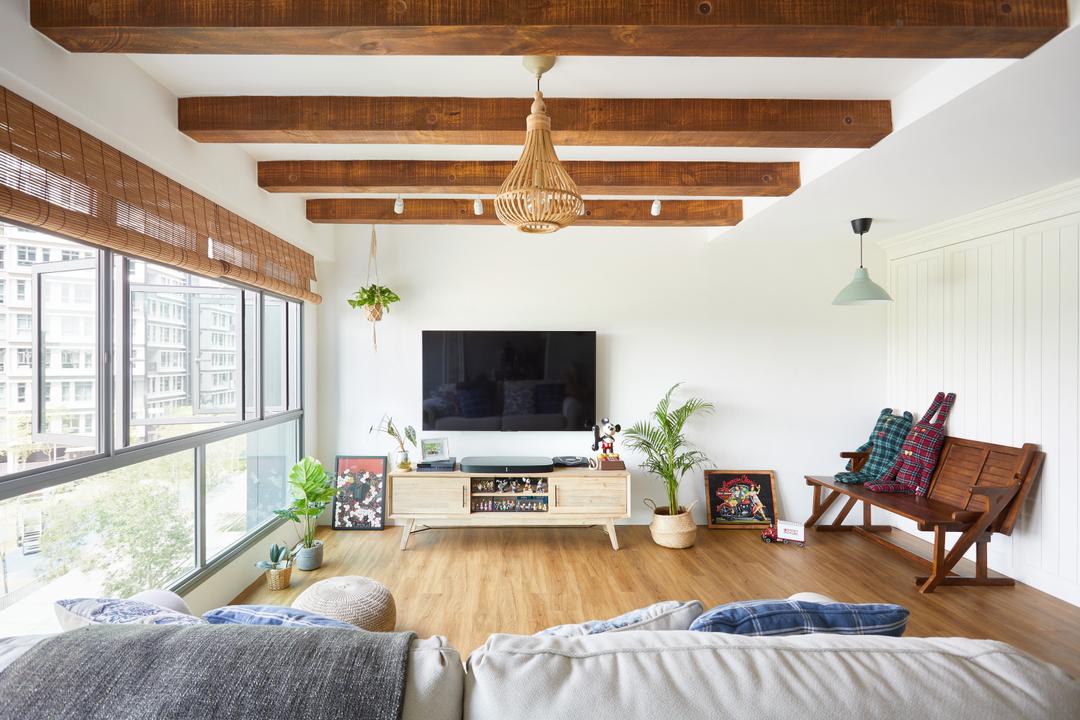 GUIDE
We Got Design Pros to Weigh in on 2019’s Reno Trends Again!
It's time to shake things up once more! We asked local designers for a mid-year update on what's in and out for Singapore homes for 2019. 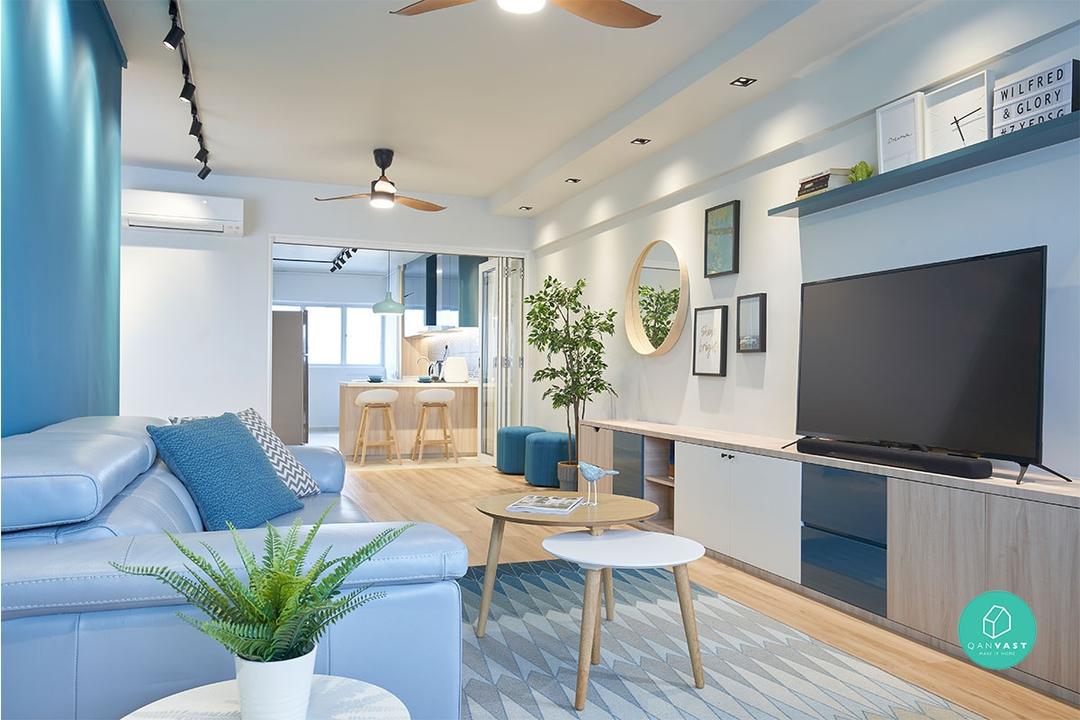 INSIDE QANVAST
Here's What Over 500 Homeowners Think About Renovation in SG
What do Singaporeans want (and expect) out of their home overhaul? Results from our 2018 Qanvast Home Renovation Survey shed some light.
Preparing the next article…
Recommended for you