If you think the idea of having two homes under one roof is impossible (like we did), you may want to re-think that after looking at couple Jason Teo and Sylvia Lim’s “studio apartment” at Joo Chiat 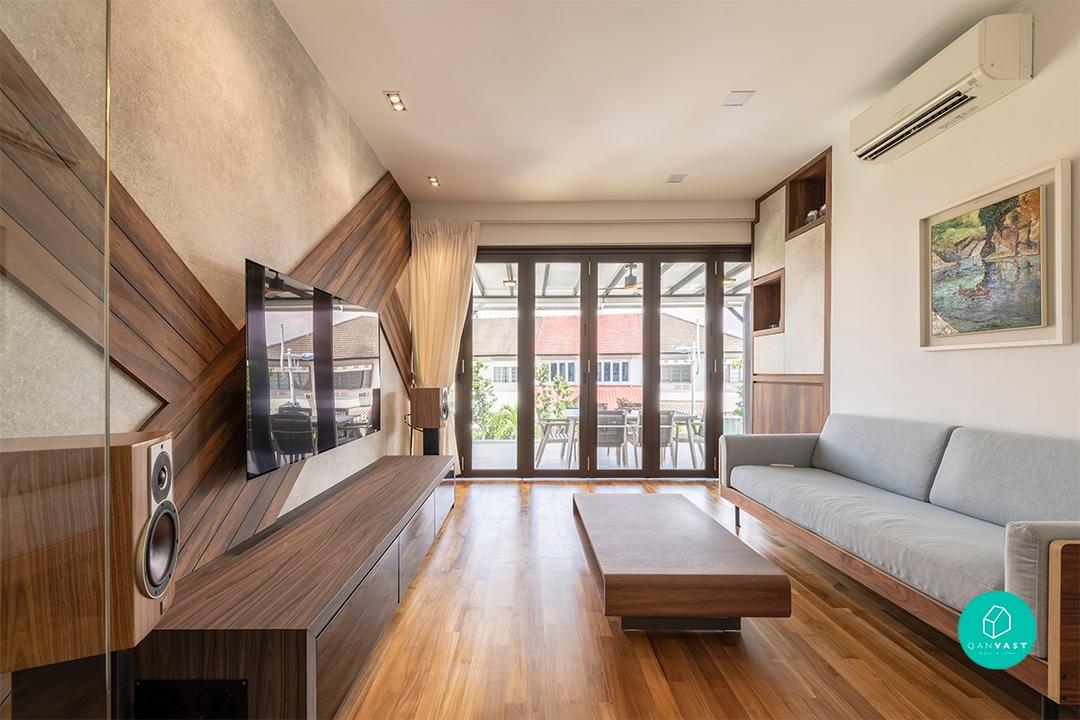 This unique home-in-a-home was built by transforming the second floor of Jason’s parents’ two-storey bungalow into a couple’s nest that comes complete with its own living room, private boudoir, and even an al fresco dining area!

To find out more about how this dwelling was created, we caught up with both of its owners to chat about their Renovation Journey, their home requirements, and how they successfully accomplished this personal project with the help of local interior design firm Dyel Design. 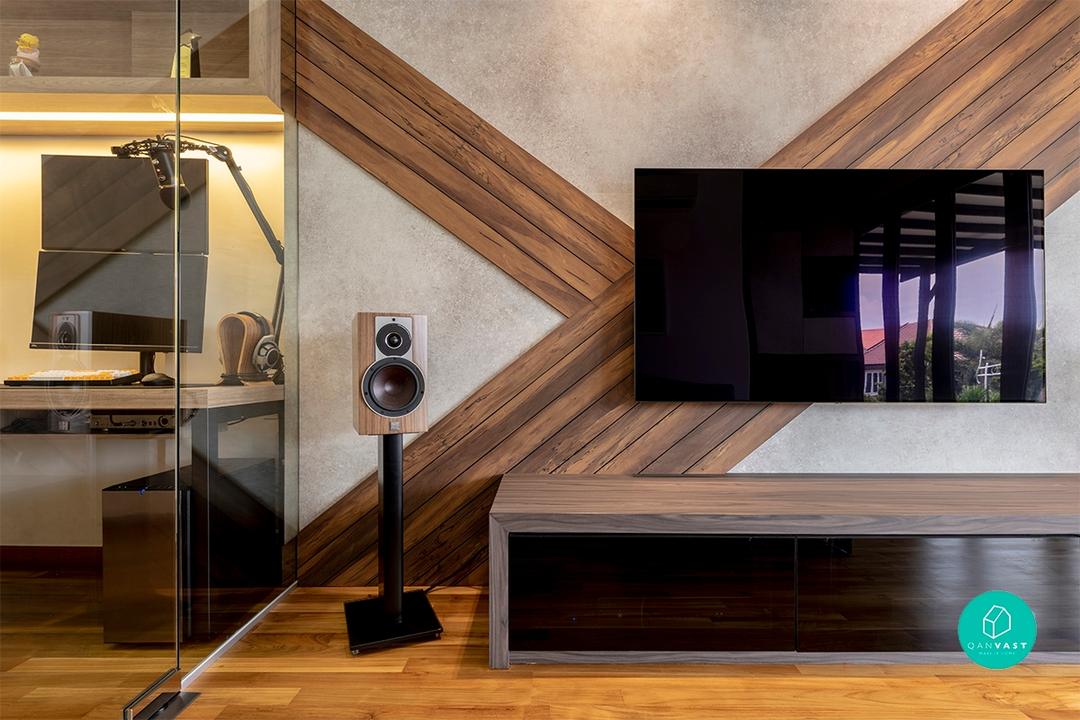 About the renovation works done

Jason (J): Basically, the space was almost entirely redone. I used to share it with my sister, and her bedroom is now the living room.

Also, because it had access to the current master en suite, we had to seal up the bathroom entrance there. To make the layout less awkward, some re-orientation of the fixtures, including the WC and the shower, was done as well.

Lastly, the walkway where our study is, was widened. The rear wall was pushed back by about a meter, so it’s a lot larger now. 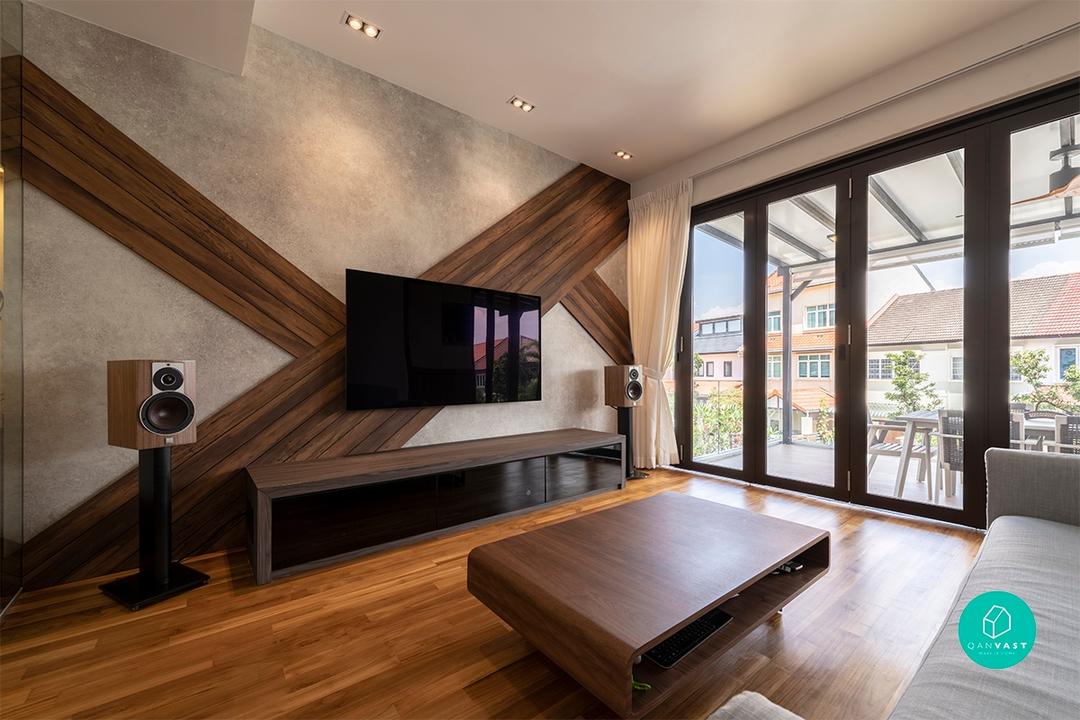 On conceptualising their home’s new layout

J: For us, the design process started with the idea of creating a private space that we could have to ourselves after getting married, which then became “how do we build our own studio apartment?”

After that, it was all about figuring out how to compartmentalise the space with an interior designer – as you can see, we have all the rooms in a typical home up here, except for a kitchen, which we didn’t see the point of replicating upstairs.

Aside from Dyel Design, we also received plenty of ideas from other professionals: some suggested knocking down all the walls, while others proposed repurposing the passage halls to create a walk-in wardrobe or an entryway. However, we didn’t go with these ideas because we felt they were either impractical or inefficient space-wise.

Sylvia (S): Yes, I think there was one designer who suggested connecting the living room to the bedroom by tearing down the walls between them. Essentially, it would have been one big living/sleeping area with a single bathroom, quite like a hotel. 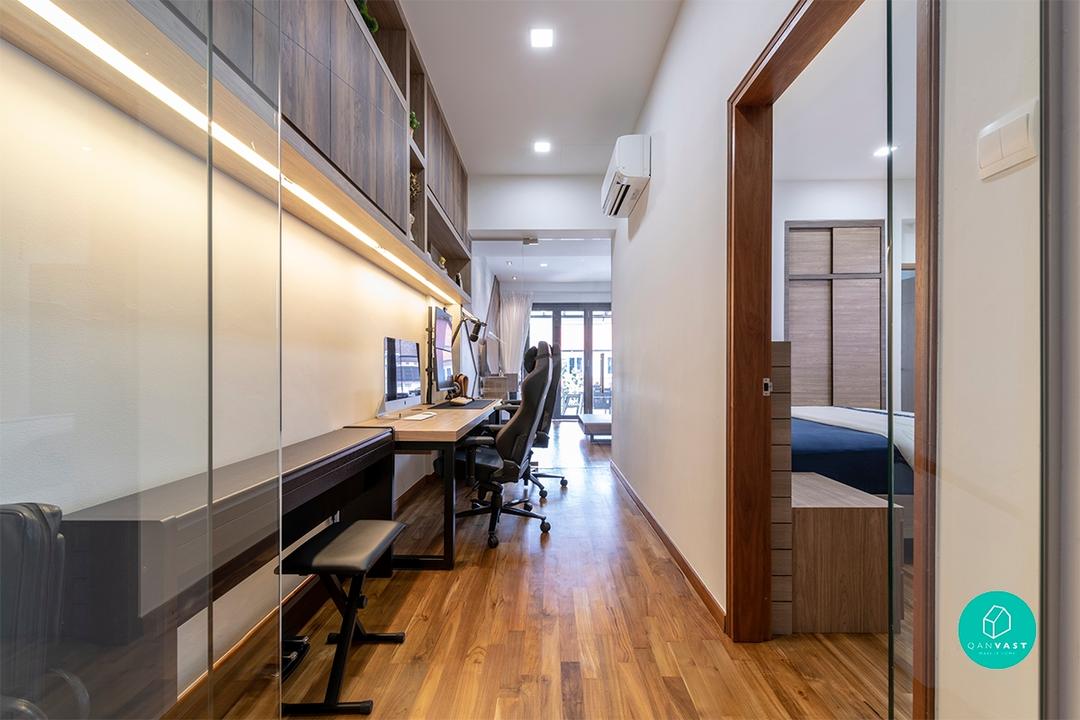 About their requirements and favourite spaces at home

J: I’m an avid gamer so I often sit in front of the computer for long periods, and because of that I needed a study that wouldn’t feel claustrophobic.

I think Dyel Design did a good job with the workstation, especially since I like to keep everything tidy. It was custom-made by them to ensure that there’s enough ventilation and that the cables can be run neatly throughout; there’s a shelving unit below for easy storage too.

And I guess the other thing that I really like is the glass divider. I can be in the living room watching TV, while my wife plays her digital piano in the study, but we can still see and communicate with each other easily.

S: I am pretty easy-going when it comes to must-haves, but my number one request was that everything should be practical. There’s no point to a home that looks great but isn’t functional or useful for our needs.

For example, one of my favourite things about the house is the wardrobe and I like it because it can hold all my clothes, plus it has just the right amount of space to keep them neatly arranged. It’s different from the one that I had in my previous home, which I always felt was imperfect because some of the compartments were either too big or too small. 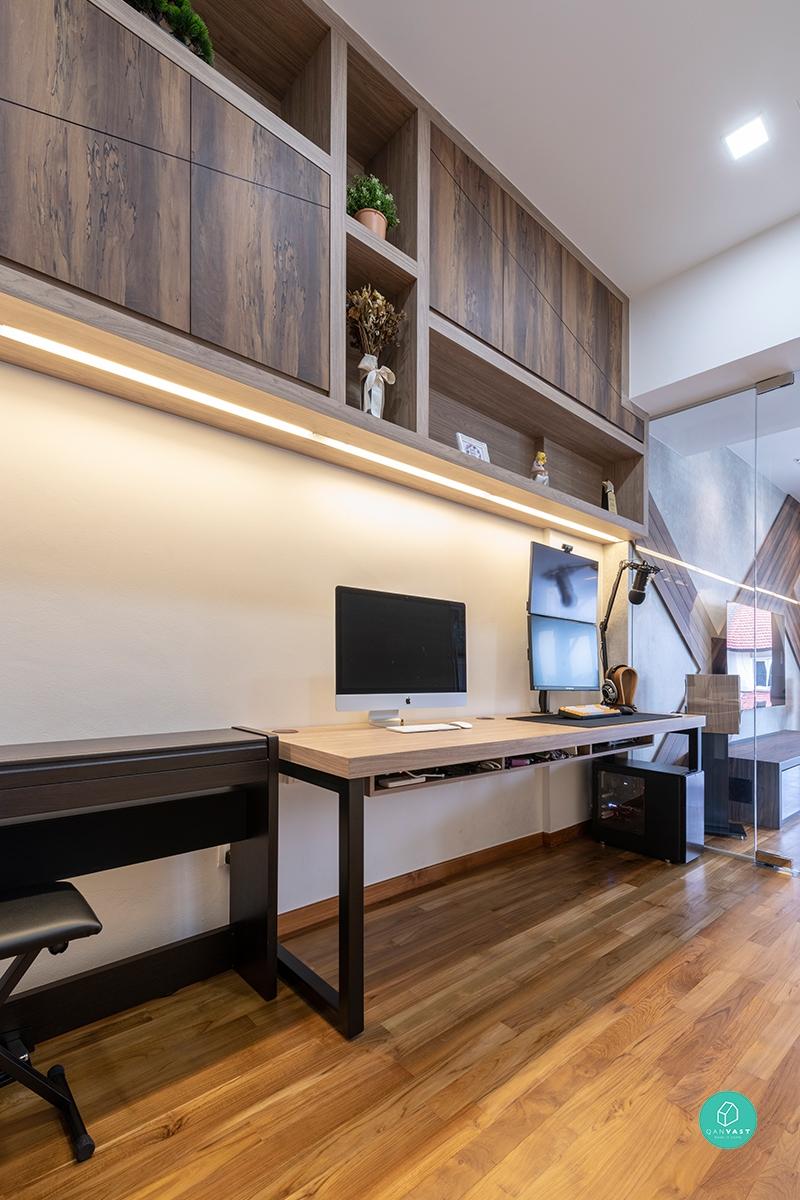 J: We had a good experience working with Dyel Design, and I only have good things to say about them.

Like I said, there were plenty of funky ideas suggested by other designers. And unlike them, Dyel’s planning was practical and maximised every inch of space that we had. For example, only they (Dyel Design) and another company [sic] proposed transforming the walkway into a study.

Some designers may also have a “whatever” attitude when it comes to the work that their sub-contractors do, but not Dyel Design, who were specific in conveying our requirements to their partners. 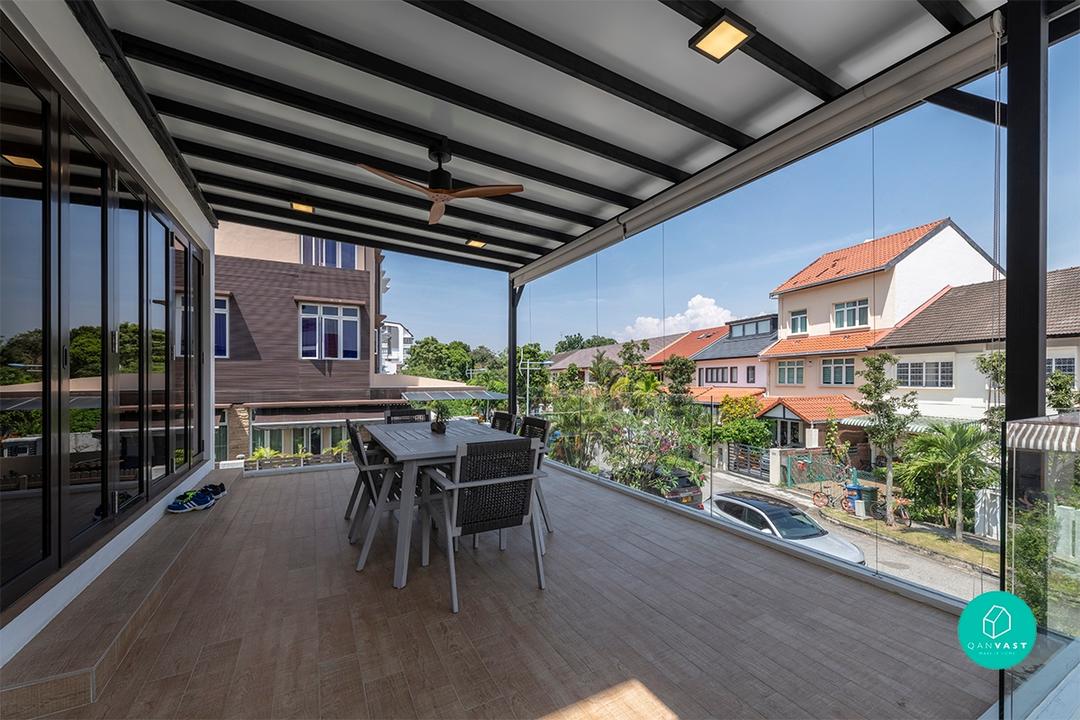 About their biggest splurge

J: I think that would be the trellis in the al fresco dining area, which I think took up 20 per cent of the total budget. It wasn’t cheap because it’s made of actual steel beams that were custom-made. 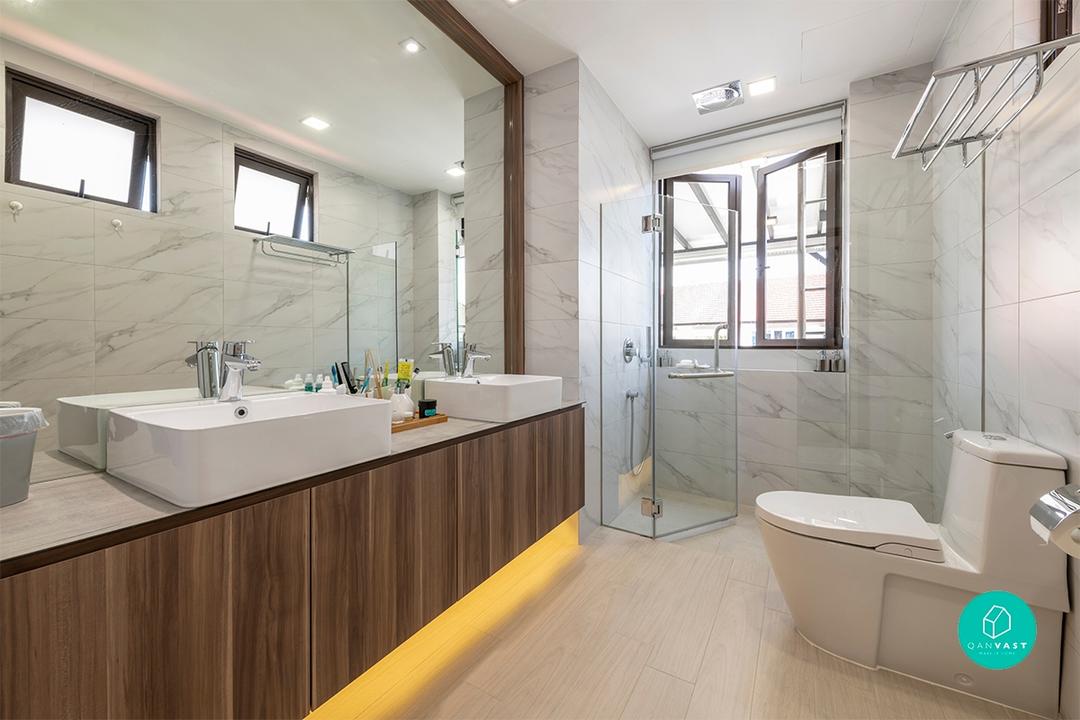 About what family and friends have said about their home

J: When we had our friends over for dinner, the first thing they noticed was how neat the study is. I used to have an L-shaped table, which made it very easy to accumulate clutter on the surface.

S: Our friends also took notice of the bathroom, which they say has a hotel-like feel to it. It’s probably because of the cove lighting underneath the cabinets, and the dual sink which makes the whole space look generous. We also used fittings from Grohe, because both of us like the premium feel of their products. 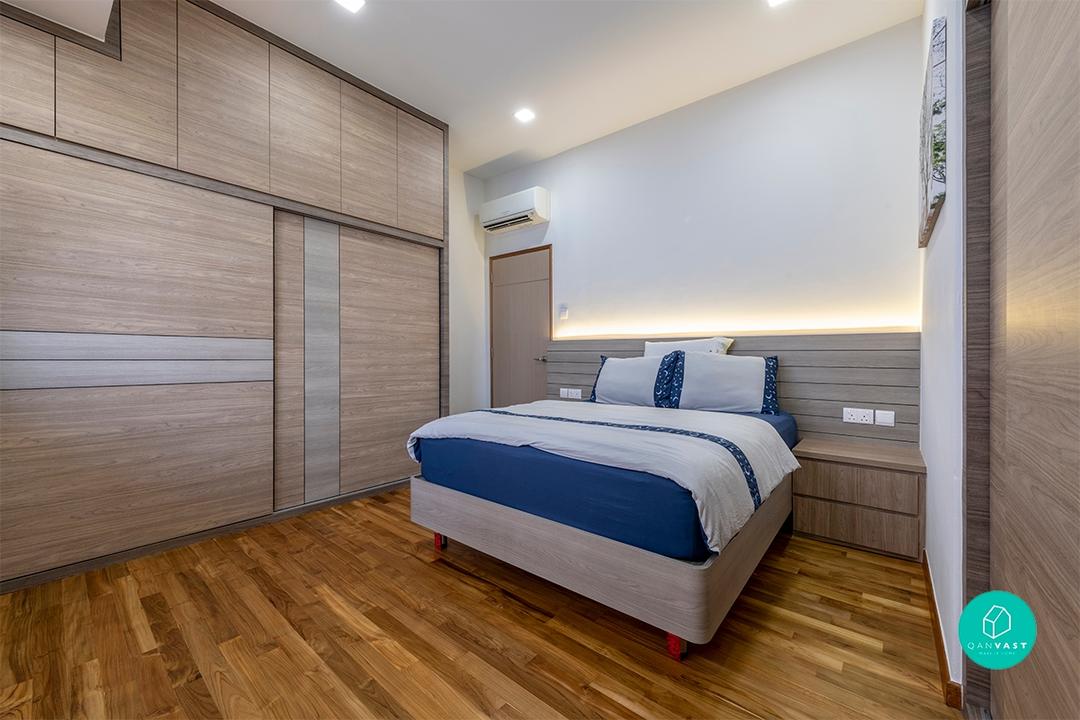 Lessons learnt from renovating their home

J: I don’t think this whole renovation would have been a smooth process without my parents’ guidance.

When my dad built this bungalow, he did it from scratch and he knew exactly where the structural beams were, along with what areas could be worked on and what couldn’t. His knowledge about the house was especially handy when it was time for Dyel Design’s sub-contractors to do the heavy lifting.

Part of the renovation also involved fixing the roof top because it was leaking, and my dad was the one who came up with the idea of incorporating the trellis (at the dining area) as part of the overall solution. Instead of making it a flat surface, my dad suggested building the trellis as a slope so that it would allow the rainwater to flow downwards unimpeded, rather than accumulate above.

S: Other than that, we also learnt that it’s important not to rush into things. We know couples who had to work with tight timelines and weren’t able to get what they love for their home. In that sense, we were quite fortunate as we had sufficient time to have indepth discussions on what our future living environment would be like.

I also feel that couples should get on the same page about what they would like to have in their future home through open, honest conversation – this way, you won’t end up putting your designer in a spot on who to listen to. 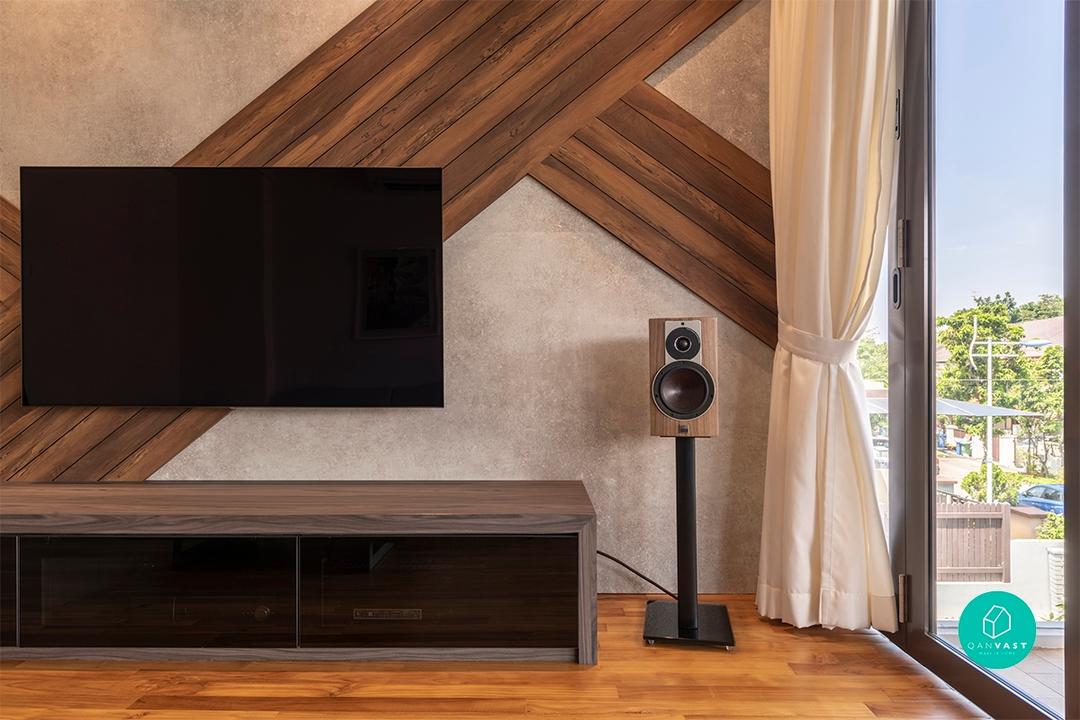 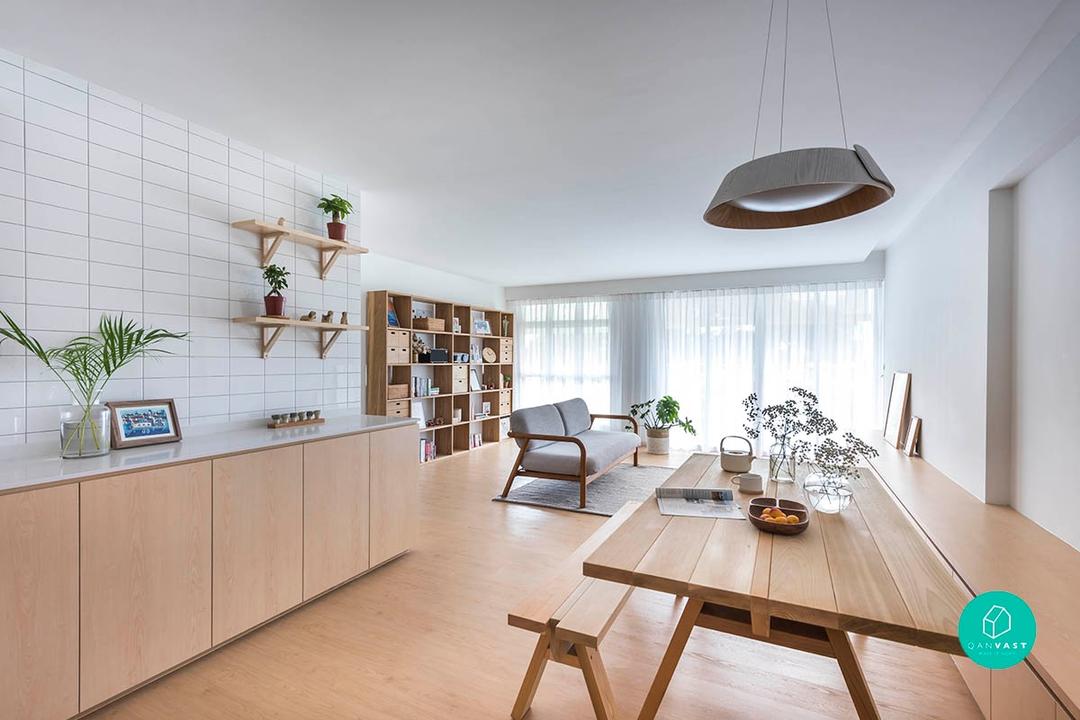 RENOVATION JOURNEY
This Bright, Minimal BTO is a MUJI Catalogue Come to Life
Light and breezy, homeowners Rachel and Michael share how Glenn from D5 Studio Image helped them create their very own Japanese-themed sanctuary. 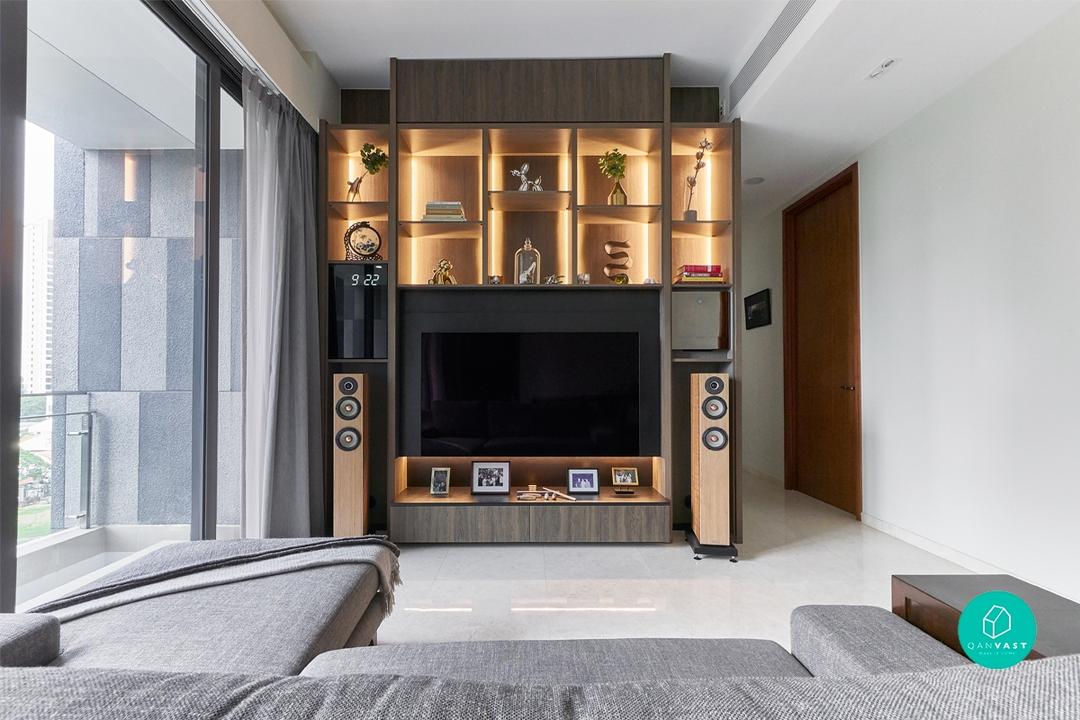 RENOVATION JOURNEY
A Three-Bedder That’s a Traveller’s Refuge from the Road
For consultant Jason Moy, this Balmoral Road apartment is more than a liveable space – it’s a home that’s truly his.
Preparing the next article…
Recommended for you