With some clever space planning, The Makers managed to transform this two-room Bukit Batok flat into a functional space that’s both useful and welcoming.

Despite what most people may think, small homes can be great spaces to live in. Just ask homeowner Pamela, who recently renovated her two-room HDB apartment at Bukit Batok with the help of local design studio The Makers. 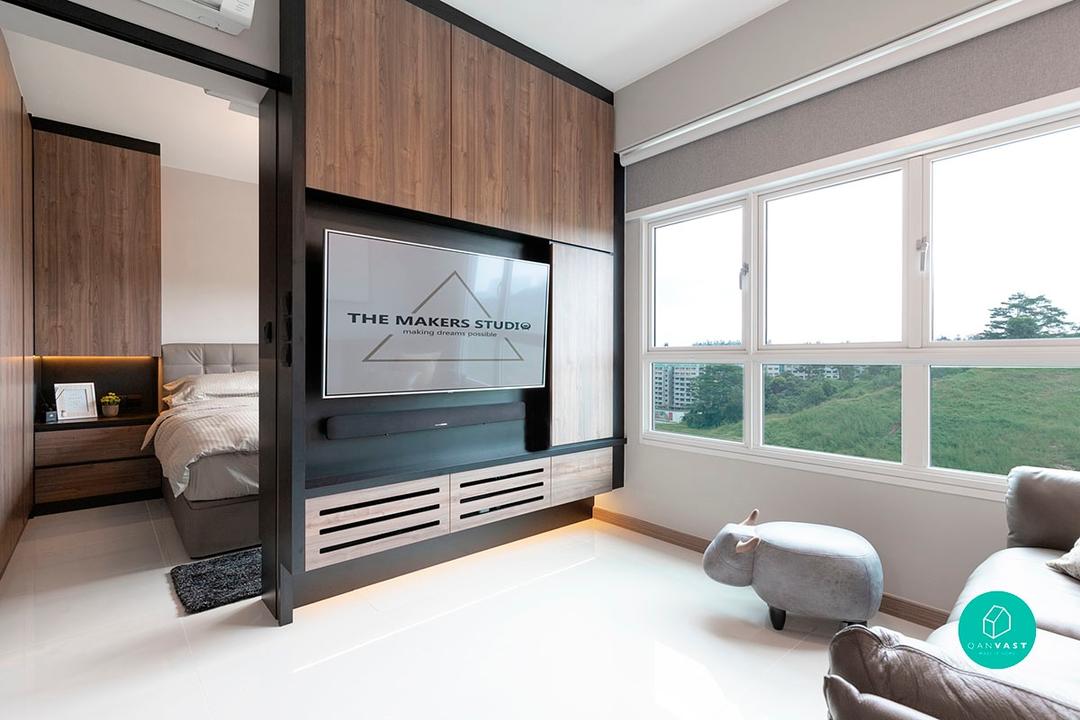 “It isn’t easy finding space for storage solutions in a small home, but I think The Makers did a great job,” says the bachelorette who shares her flat with her pet dog, Toto. “I told them that I needed storage solutions that aren’t too bulky as well as enough space for entertaining guests. And they gave me exactly what I needed by proposing some small, but significant changes.”

To find out more about what these tweaks entailed, we sat down for a chat with Pamela to talk about the various changes made to her home as well as how they help to make the most of its 45 sqm space.

Pamela (P): Outside of entertaining my friends occasionally, I lead a very simple life, which is why I needed a cosy space where I can host them during our gatherings. As much as possible, I also wanted a space that’s easy to maintain and clean. I run my own business, which can be quite demanding on my personal schedule, and that leaves me with little time to tidy up. 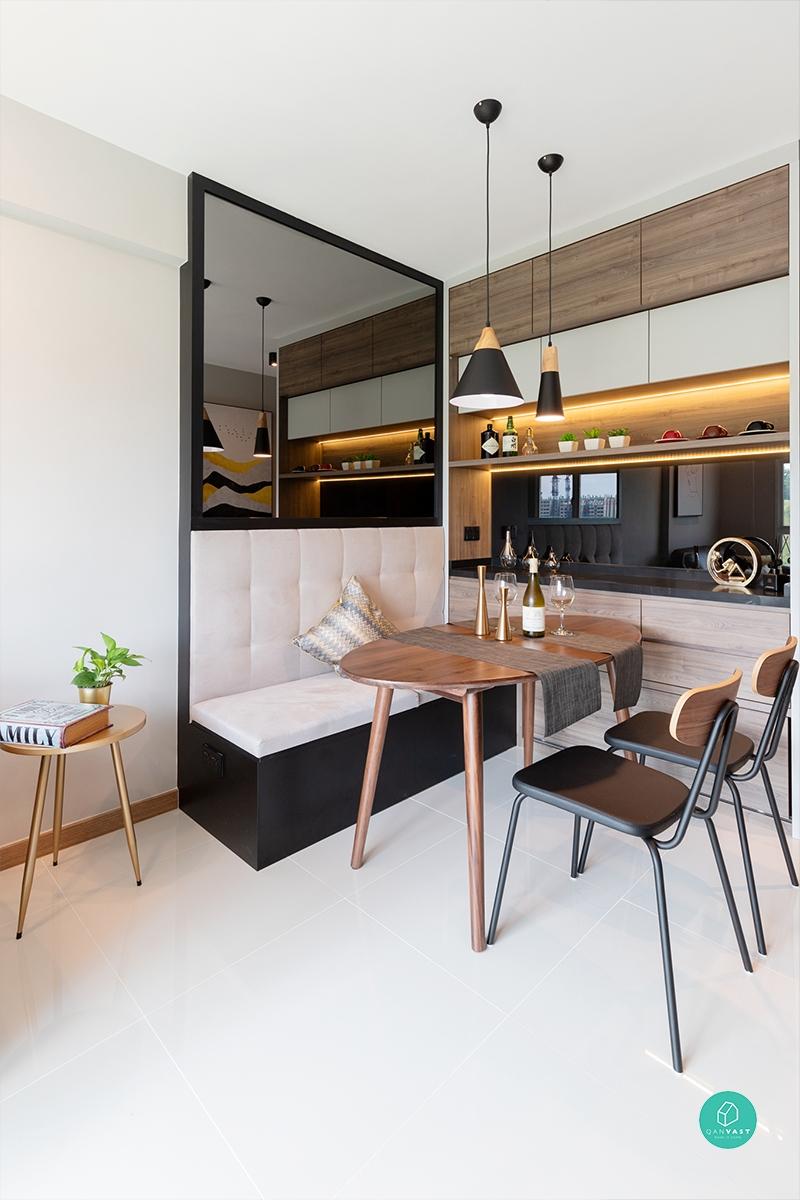 On her home’s look

P: I would describe my house to be minimalist and cosy. The look is Scandinavian-inspired, but I didn’t want the surroundings to be too white, which is why the colours you see are mostly dark grey and brown. I also wanted to create a sense of space, so it was important to have some mirrored surfaces around. 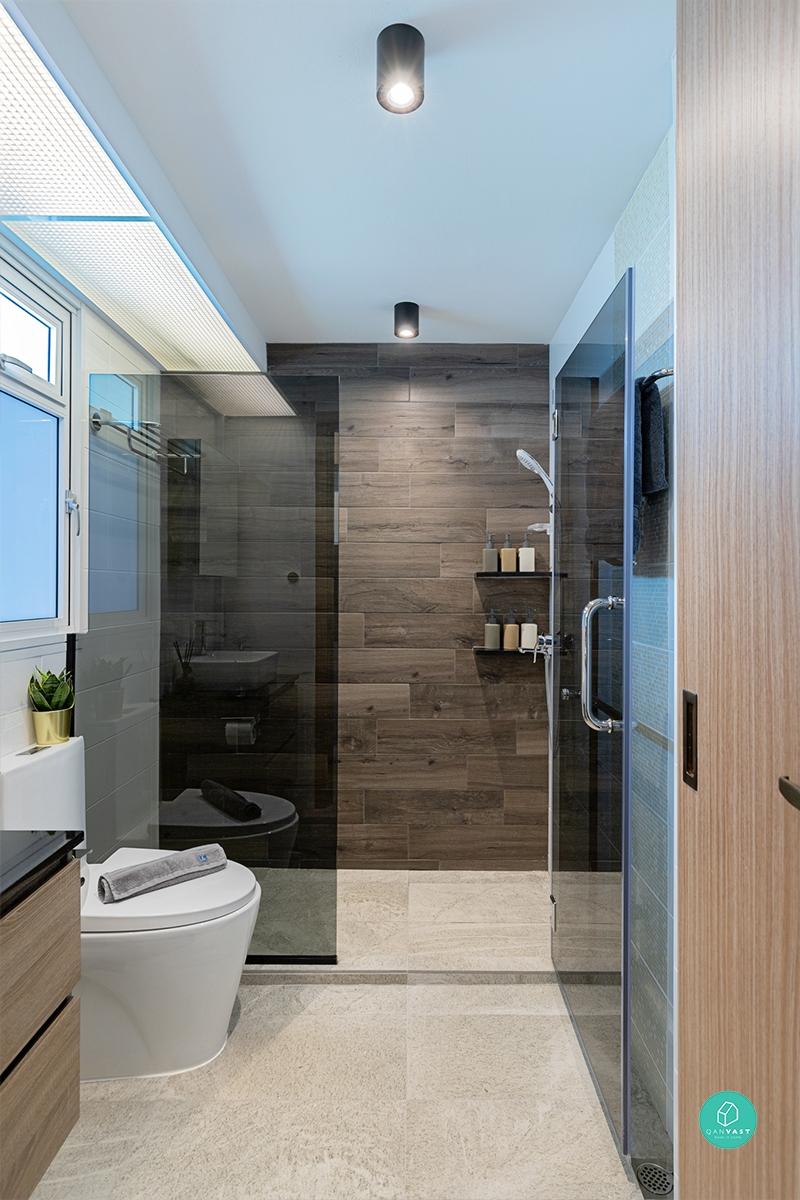 On changes made to her home’s layout

P: There’s something special about the bathroom’s layout, it was originally connected to the master bedroom and kitchen, which each had their own entrances. However, with that configuration, I couldn’t have the dry and wet areas separated because the shower would be right in the middle of the bathroom.

What The Makers did to solve the problem was to seal up the en suite entrance; that allowed the shower area to be tucked to the bathroom’s rear and for a screen to be built around it.

Sealing up the bathroom entrance also allowed me to have a tidier bedroom. With the entrance gone, The Makers could now fit in a longer L-shaped wardrobe that gives me at least 10 feet of additional storage space; it’s connected to the display case on the outside, which I use to store my wines and knick-knacks. 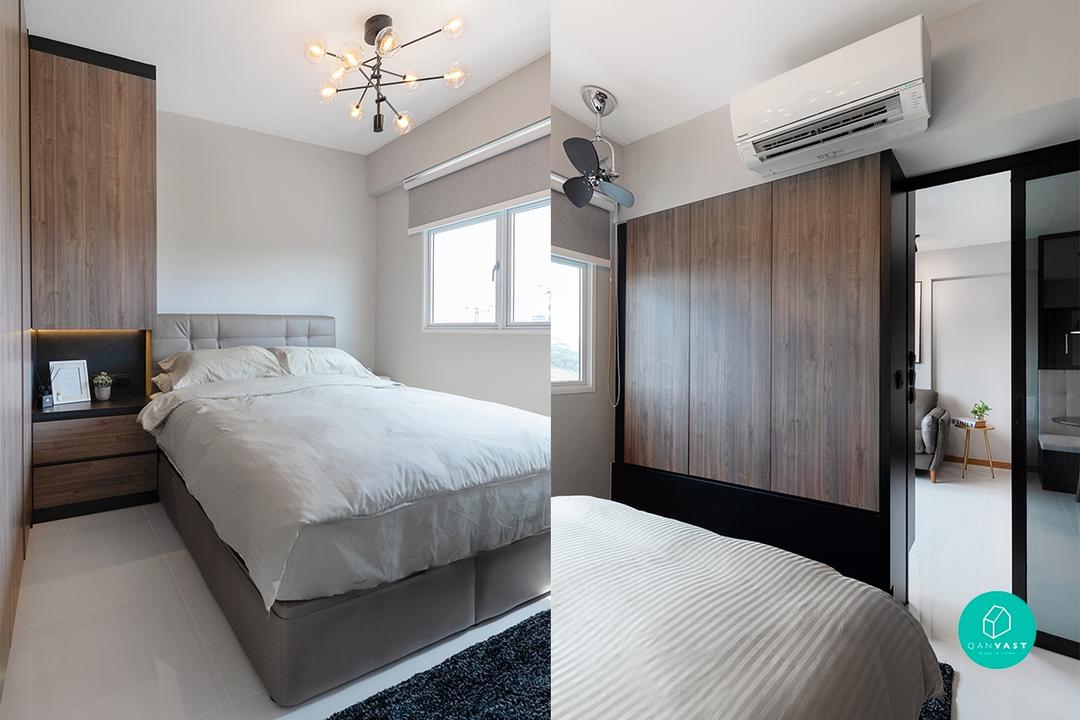 Another change that I feel was impactful was the decision to knock out one of the living room’s walls and replace it with a TV wall that also comes with a dresser and mini wardrobe on the back. I really like how it’s able to satisfy my storage needs without adding any excess bulk to both areas. 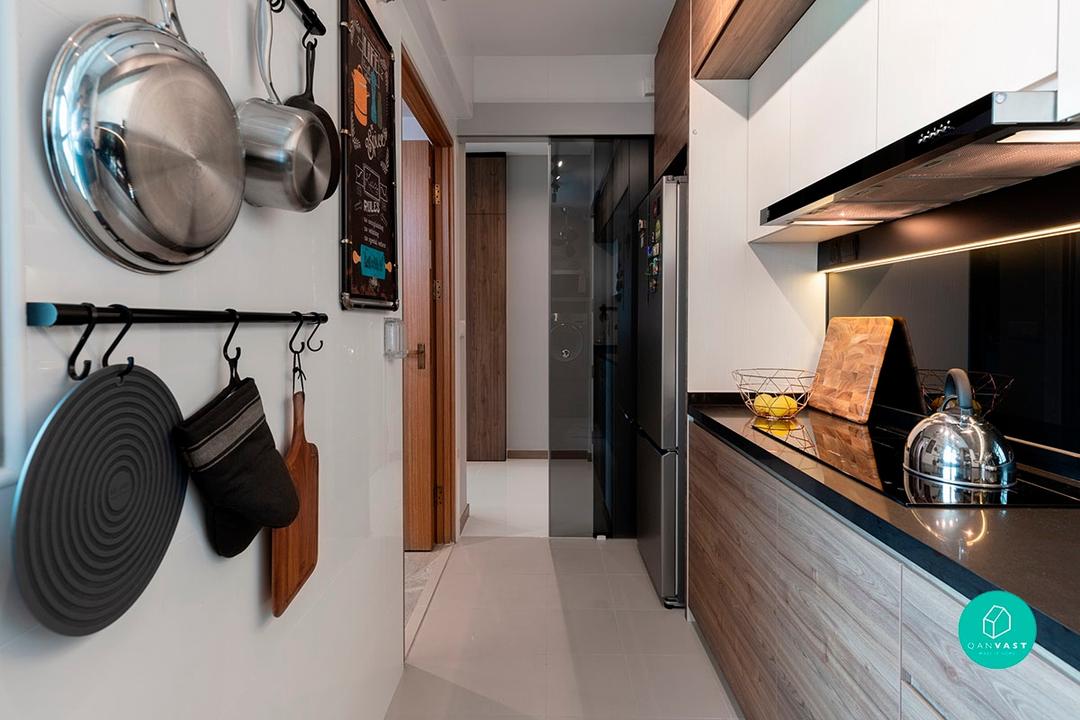 About getting to know The Makers

P: I got to know about The Makers through a Facebook ad, and I immediately took a liking to their work. In total, I met about ten designers through various means, including Qanvast, but only Cecil, who is the head designer of The Makers was a good fit.

Don’t get me wrong, the rest of the designers I met with were great – they were experienced, they were efficient, but what they didn’t have was Cecil’s sensitivity and eye for detail when it comes to designing a bachelorette’s home. It also helped that she understood what I wanted and was able to propose storage ideas that are efficient and lightweight. 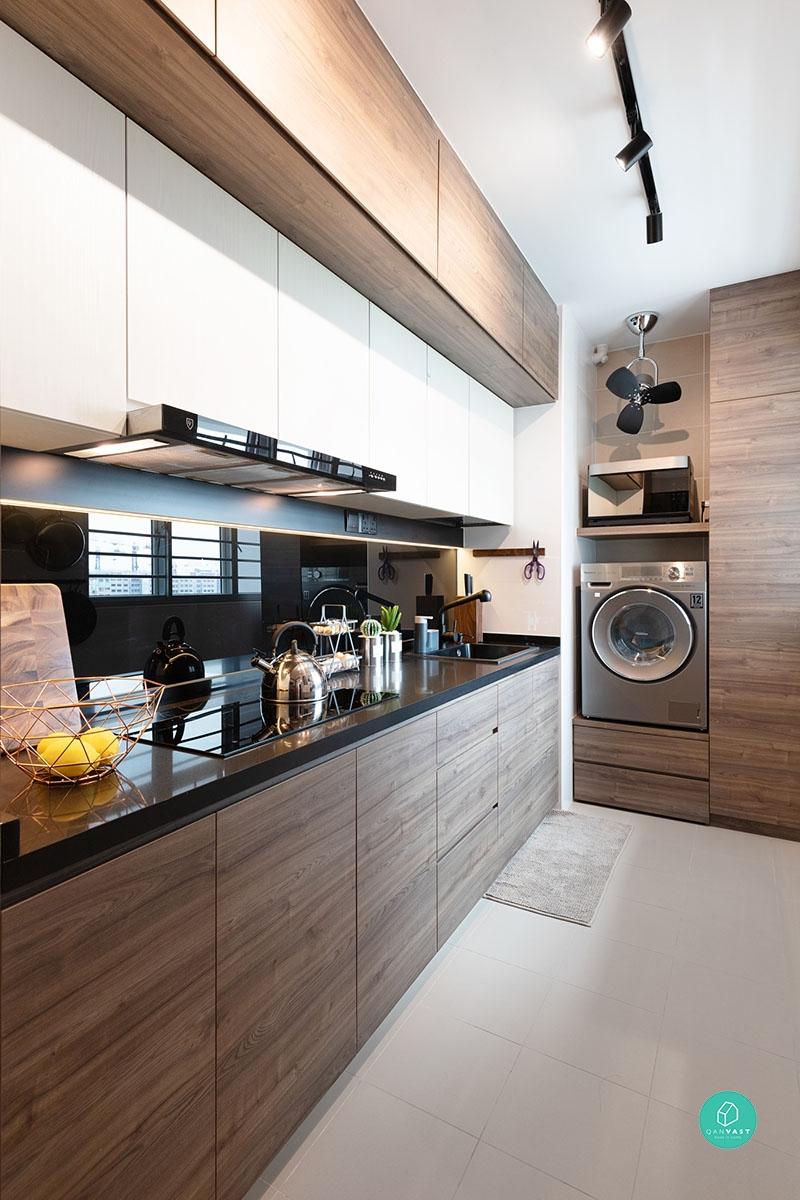 About working with The Makers

P: Work-wise, I would say that they are quite systematic. It’s my first time working with a designer, so I didn’t really know what to expect but everything went smoothly. I met with their sub-contractors, electricians and carpenters to discuss my requirements, and everything was done in a step-by-step manner. Scheduling-wise, everything was on time and I was able to move in on time according to my plans.

Also, they were nice enough to include an extra feature. I didn’t request for it, but The Makers built a swing door into the side of the display case for Toto, just because the bedroom’s sliding door would be too hard for him to open. In short, they were able to take my ideas and further improve on them. 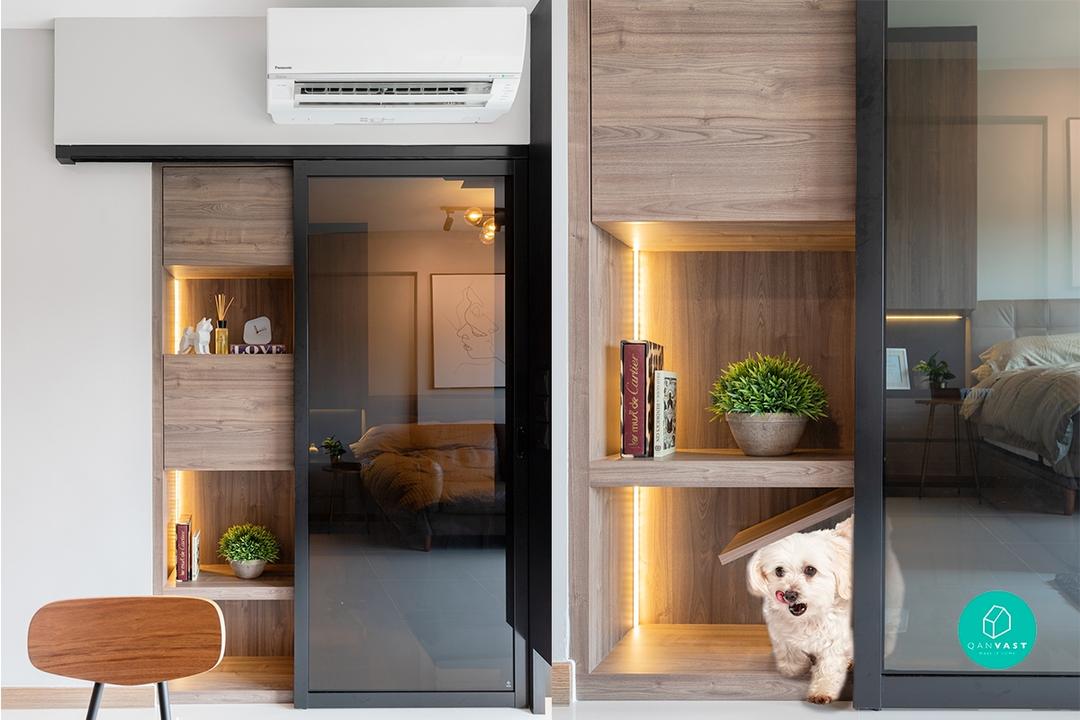 To sum it up

P: I think it’s important for anyone who’s thinking about renovating to know the ins-and-outs of their own lifestyle. Your home is going to be the space that you’re living in every day, therefore it’s important for everything to be personalised to your needs. These details have to be clearly conveyed to the renovation firm that you plan to hire.

Budget-wise, think of an ideal one, but do take a look at market rates and set aside a buffer of $2,000 to $3,000 just in case you need it. There’s a chance that you may think of new ideas along the way, and with a little extra, you’ll be able to make these improvements. Also, do some research to compare pricing, it doesn’t hurt. 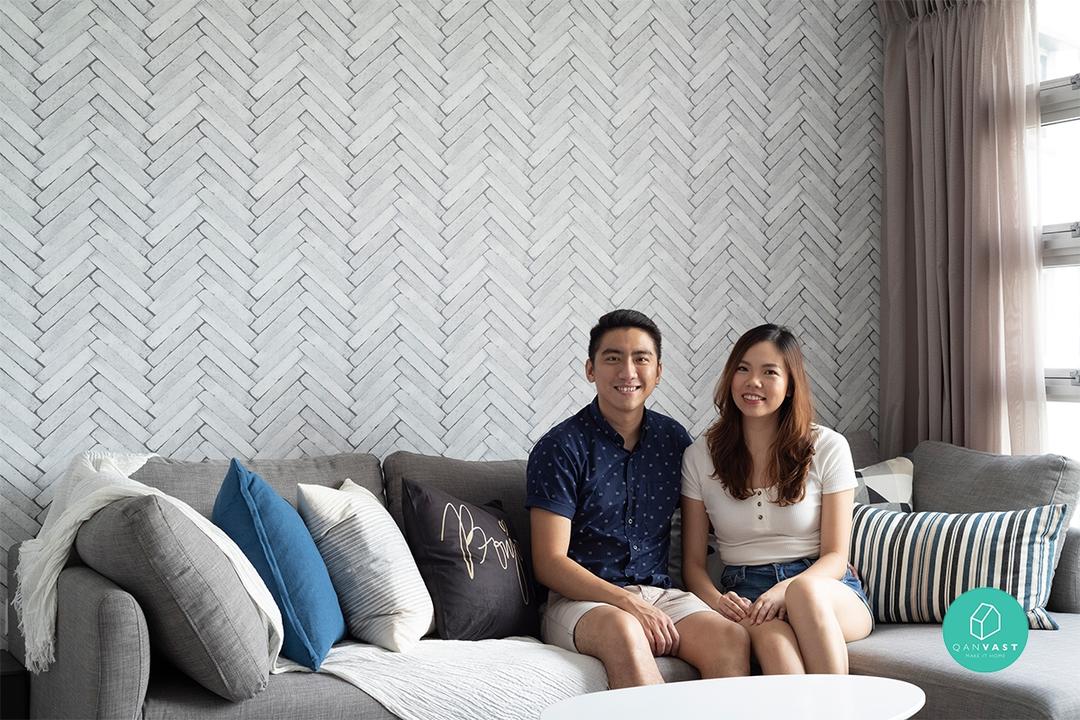 RENOVATION JOURNEY
Peek Inside This Functional Scandinavian HDB in Sembawang
The design brief: "The house must not just look good, it has to be user-friendly and functional.". Find out how the designer, Mint, achieved that. 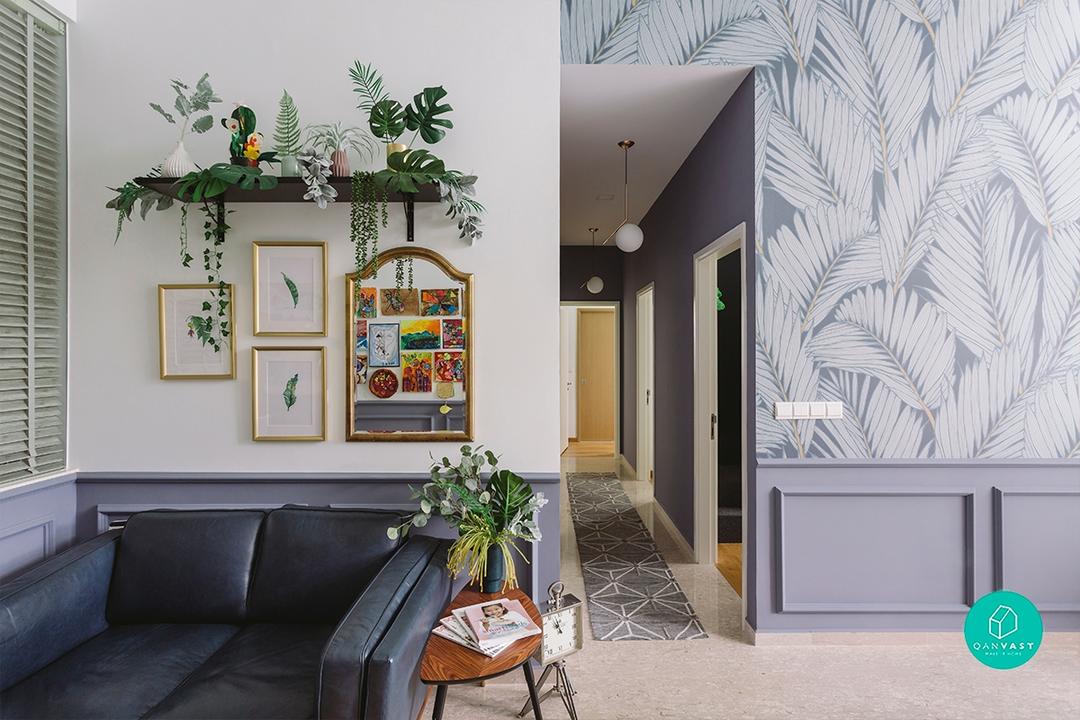 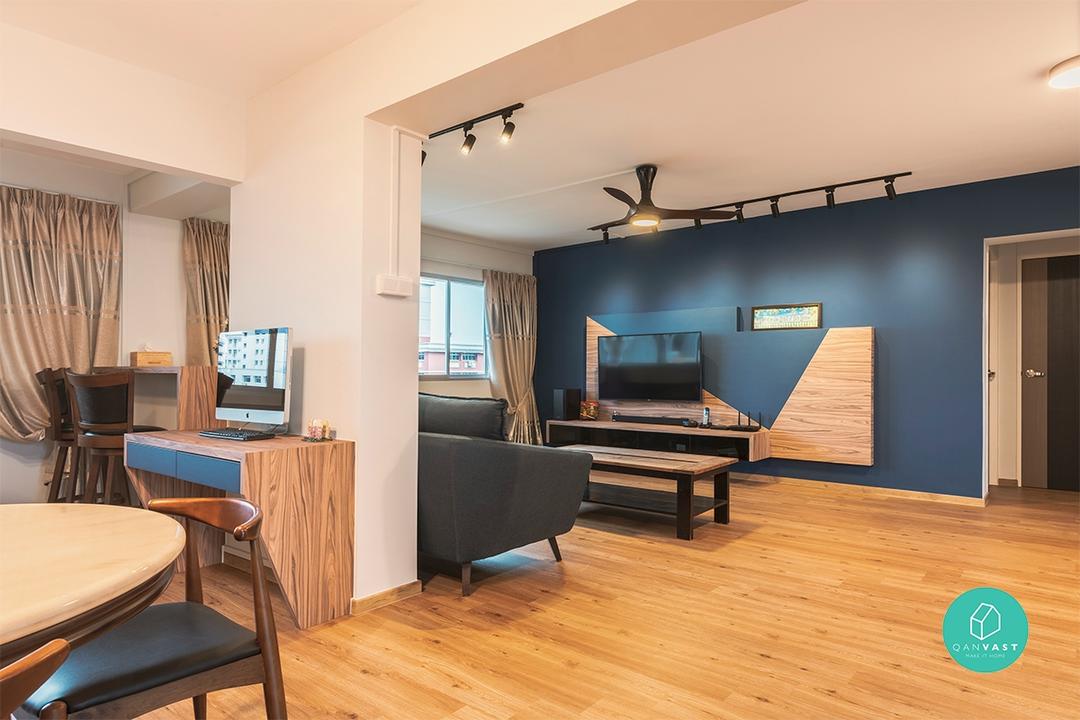 RENOVATION JOURNEY
How a 17-Year-Old HDB Home Got Its Family-Friendly Revamp
Now equipped with a practical, open kitchen as well as an additional bedroom, this revamped Pasir Ris family home is as good as new!
Preparing the next article…
Recommended for you