In This Homey, Japanese ‘Zakka’-Inspired Flat, Anything Goes

Mention ‘Japanese-inspired homes’ and what comes to mind are probably tidy, immaculate interiors that are bereft of clutter – think MUJI-esque spaces characterised by minimal decor and an almost spartan-like cleanliness.

However, rather than taking this approach when re-designing his 3-room HDB resale flat at Telok Blangah Crescent, Visual Merchandising lecturer Herman Yap took the road less travelled, choosing instead to fill its insides with a varied selection of colourful goods for a more casual, ‘lived-in’ look. 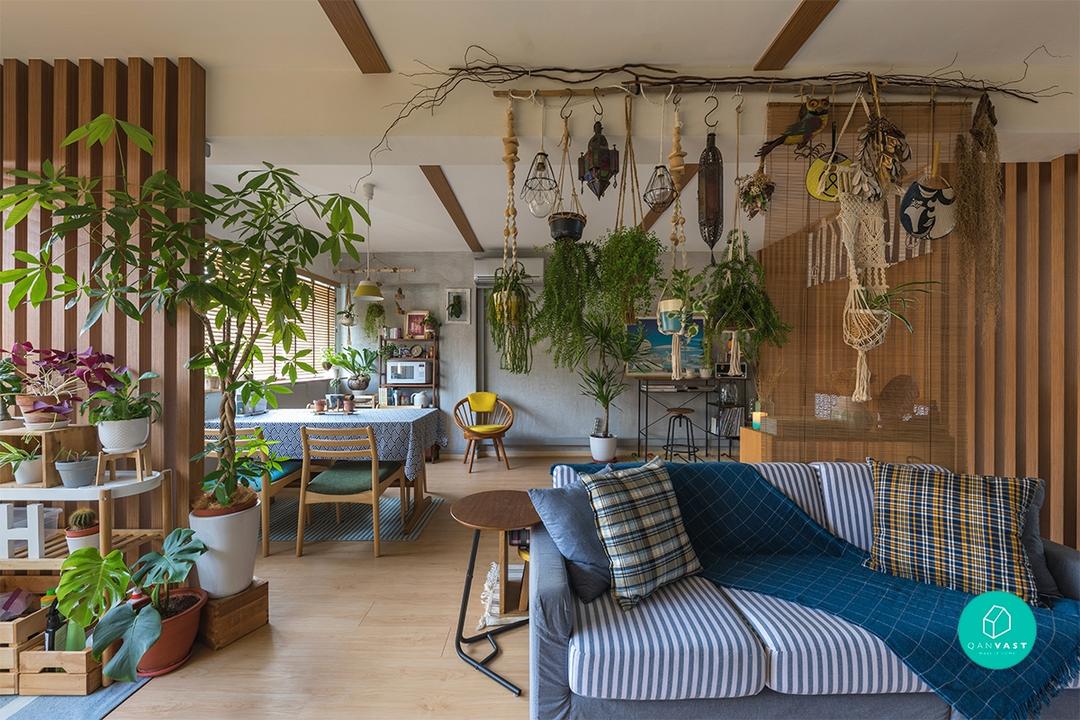 But make no mistake – despite its eclectic, almost quirky appearance, the inspiration behind Herman’s rustic abode is no-less oriental in origin.

Says the self-confessed fan of all-things Japanese: “The look and feel that I have here is derived from the Zakka concept, an idea that embraces a mish-mash of any and everything that can benefit one’s life or make it more comfortable.” 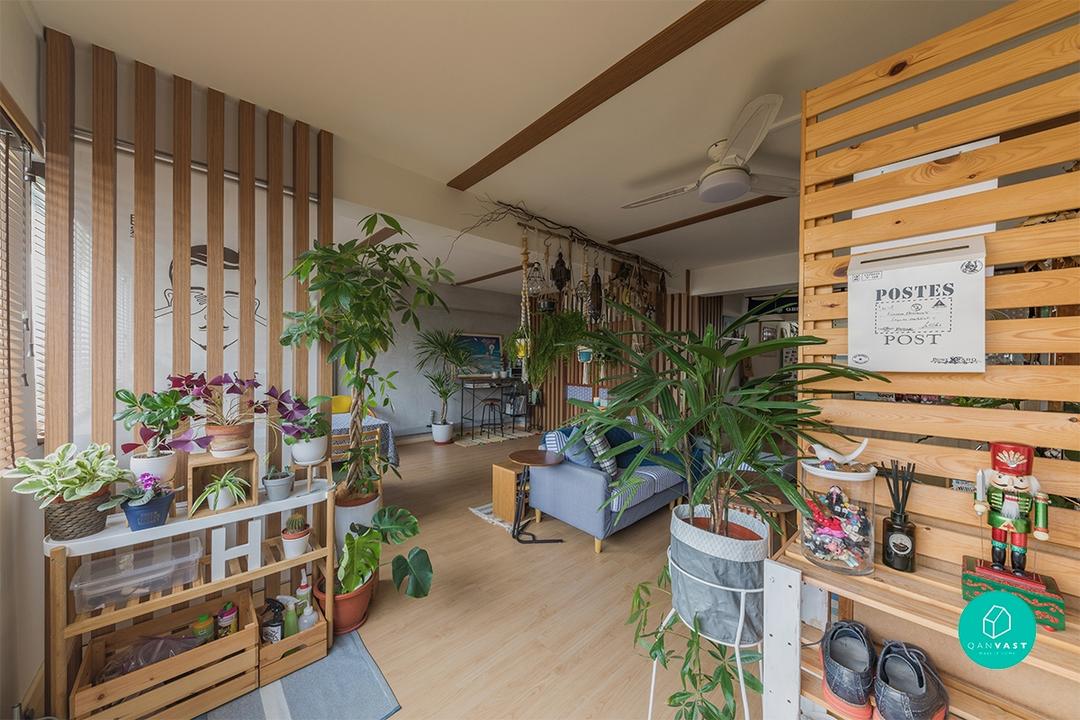 Thanks to a varied assortment of greens, stepping foot into Herman’s home feels very much like stepping into an indoor garden. Timber strips and columns are a recurring feature of the apartment’s design and were incorporated wherever possible, including a DIY shoe rack adjoining the entryway.

But the shoe rack wasn’t always a shoe rack – originally a kitchen shelf from IKEA, Herman modified it to suit his needs. “I stacked the shelf boards vertically, this way it (the rack) can serve as a privacy screen too,” he says. 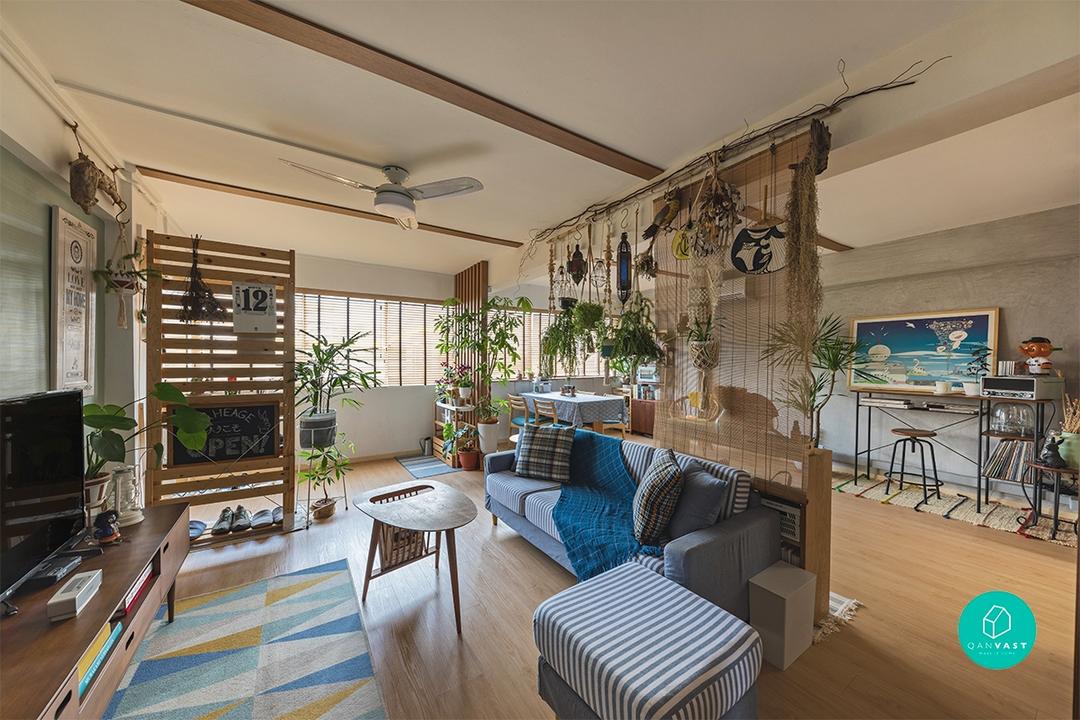 As part of the makeover, Herman had one of the apartment’s bedroom walls torn down – a much-needed change required to produce a larger communal space.

The renovation works, which took approximately 3 months to complete, was carried out in separate phases. “The initial phase was just basic construction, such as plastering, flooring installation and constructing the carpentry,” Herman recounts. “After that, it was mostly just about checking out the space on my own and seeing what needed to be added. It took me close to 10 months to completely style the house.” 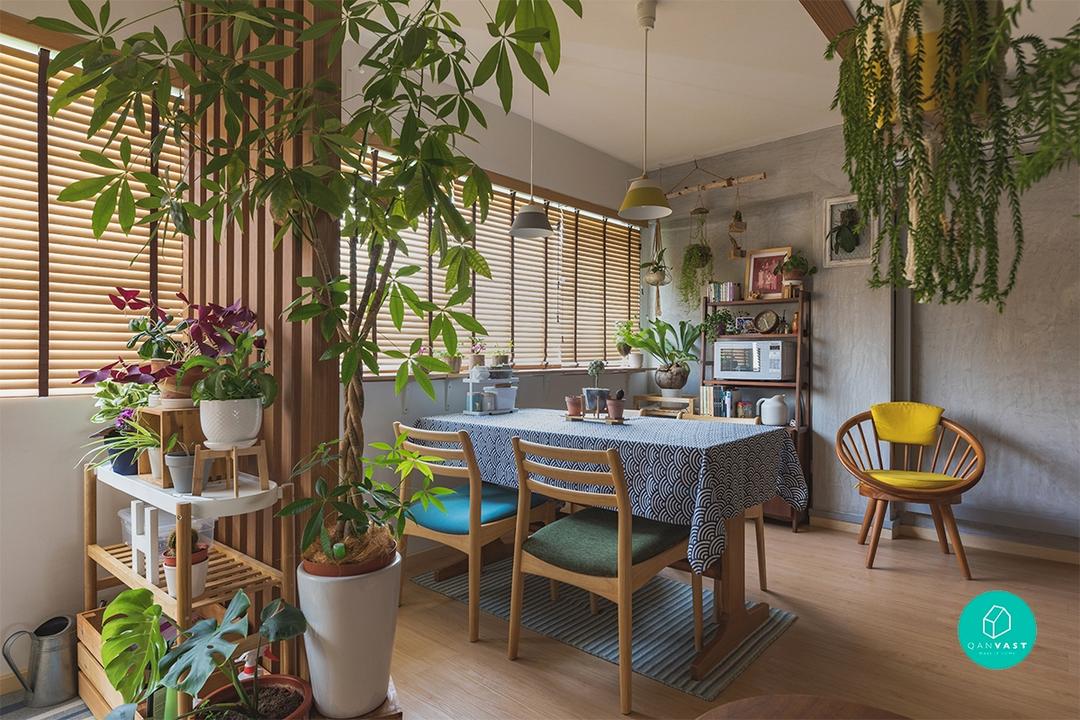 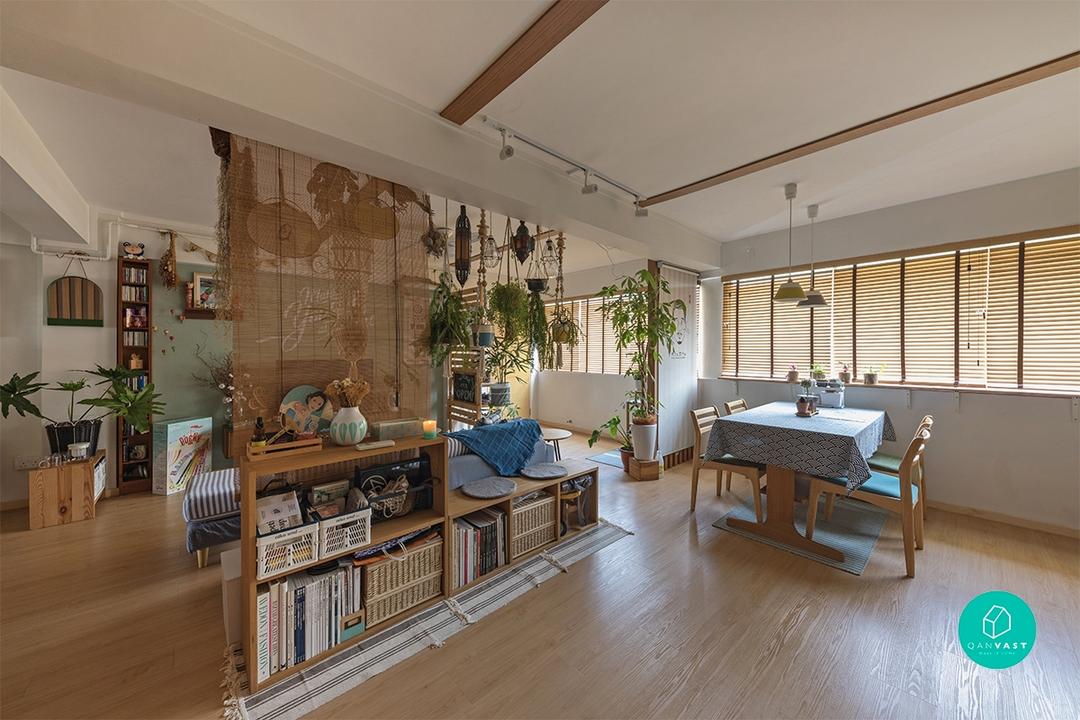 Likewise, furniture shopping was a gradual process for Herman. “The furniture didn’t all come at one time,” he says. “I kept adding new pieces, like couches and side tables, as I went along. There’s plenty of variety, but everything blends in.”

One challenge, however, was the lack of ready-made pieces that were a good fit for Herman’s physique. “I had to get my dining table customised. There was a similar piece that I wanted from MUJI, but it ended up being too low,” says Herman. 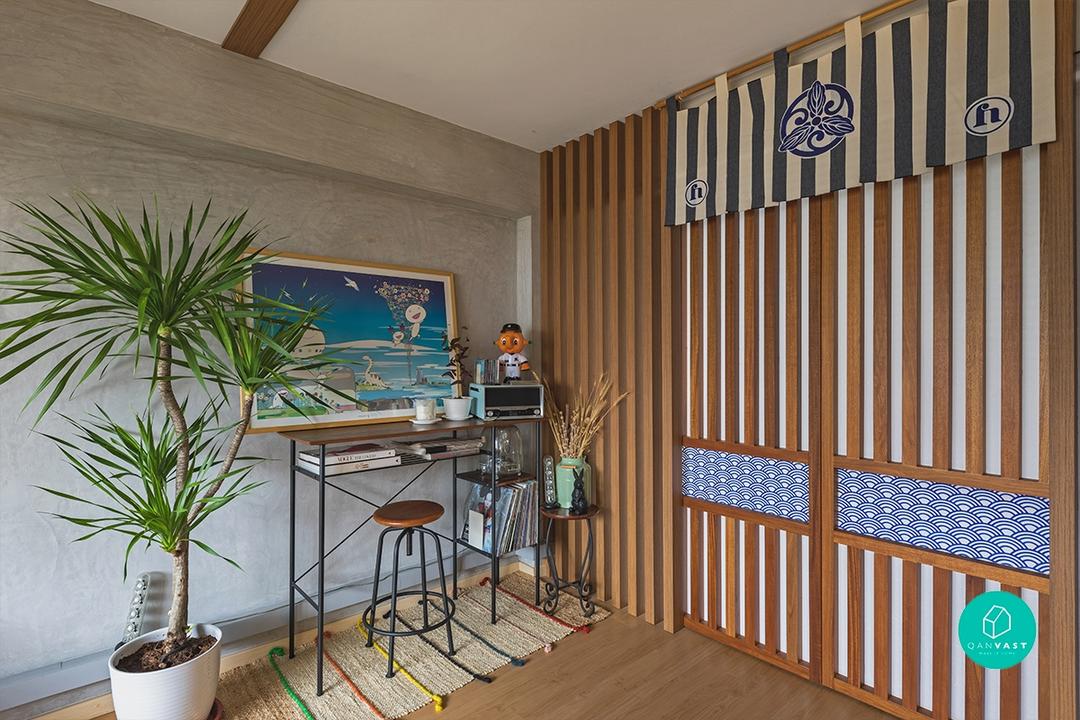 This cosy nook at the rear of the house doubles as a photography spot. “The cement screed wall is a great neutral backdrop,” says Herman. “When my students come over, I can just close off the bedroom and we can begin shooting.” 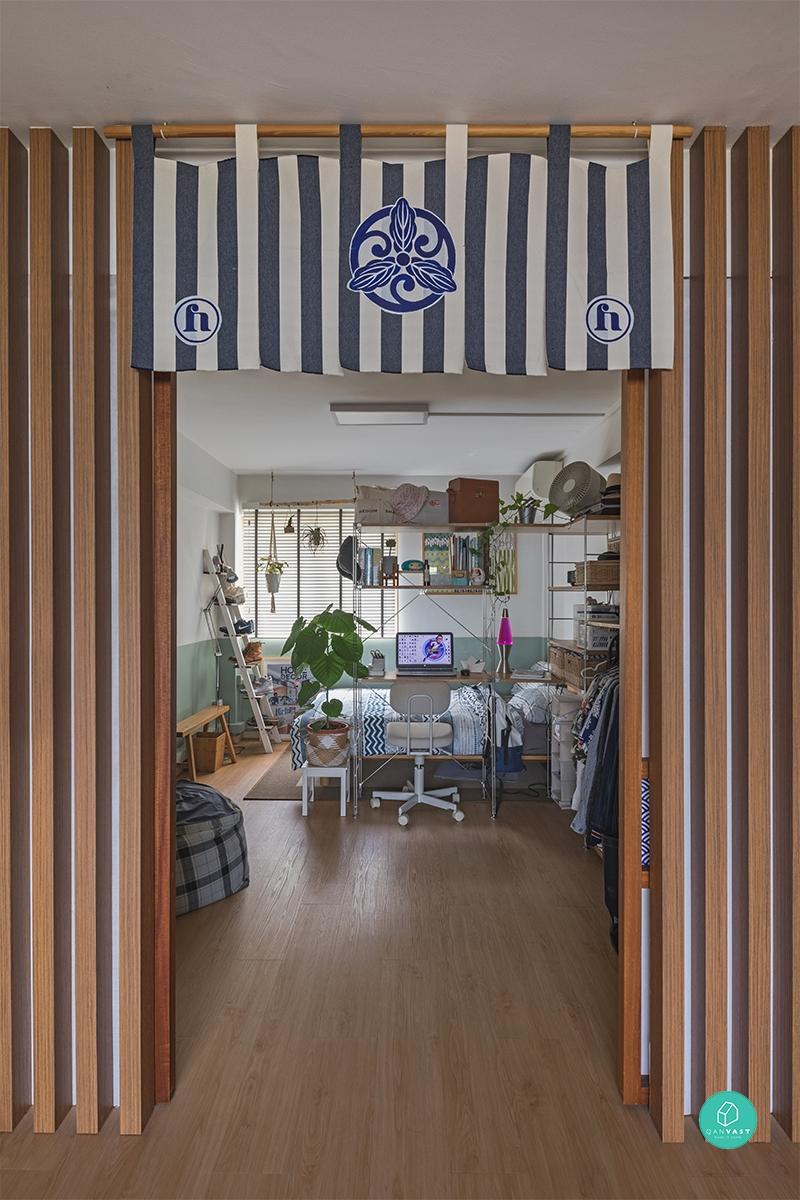 Twin Shoji doors (traditional Japanese doors with rice-paper screens) separate Herman’s bedroom from the rest of the home. “Initially, I used Chinese painting rice-paper for the doors, but it was too thin. My friend who came by for the housewarming party tore it by accident,” recounts Herman. “Luckily, I managed to find replacements from Japan!” [laughs]

The Noren door curtains hanging above the bedroom entrance are another one of Herman’s many DIY projects that can be found throughout the house. He says: “I initially wanted to make a tote bag from the fabric, but I realised that the stripes went well with the door frame, so I painted on a personal motif and turned them into these curtains.” 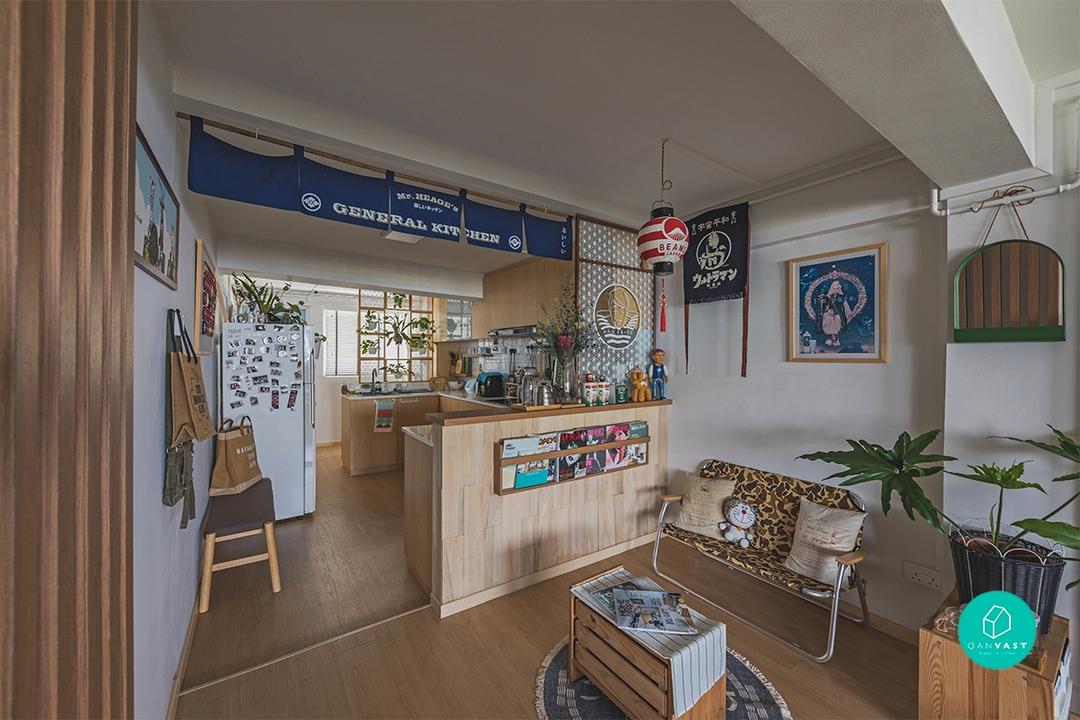 Uniformity is the name of the game for the kitchen’s design: aside from a recurring Asa-no-ha motif that runs throughout the kitchen, the cooking area also shares the same warm vinyl flooring as the rest of the house for visual consistency. “This way, it feels seamless,” says Herman. 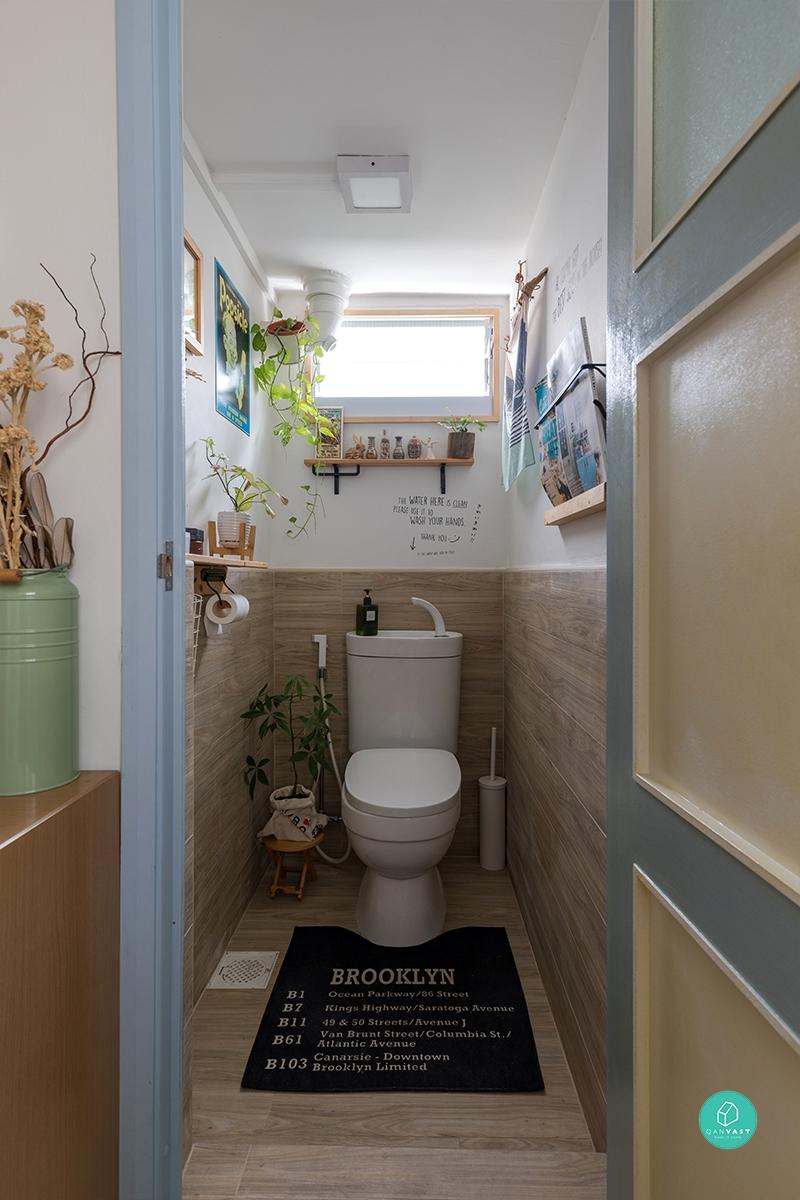 Herman’s hands-on approach to design also extends to the house’s common bathroom. Due to space constraints, plans to install a small sink inside the space were scrapped, which led to Herman’s (successful) hunt for a compact toilet-sink combo.

Meanwhile, the adjacent shower area (not pictured, but you can check it out on Herman’s Instagram account) features a plant mural that was hand painted by none other than the owner himself. “It was something that I just had to do, because I felt it would be quite sad to face whitewashed walls everyday while showering,” he says. 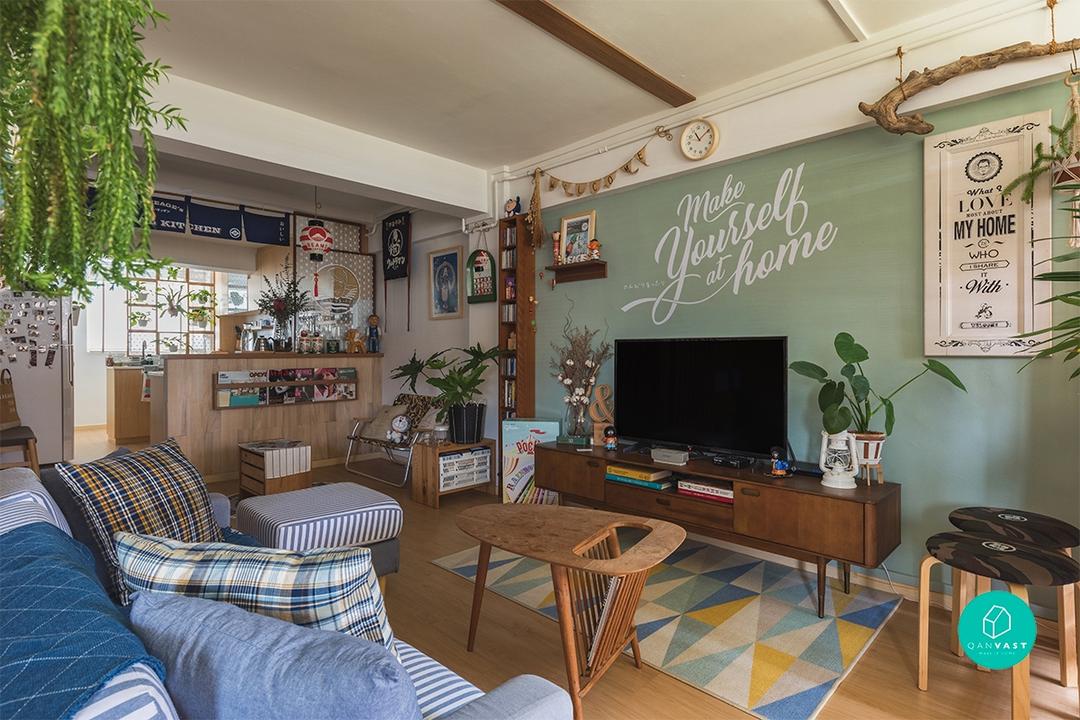 Finally, fronting the sitting area, is an accent wall that was also painted by Herman. Dressed in a refreshing coat of mint-green, the structure features yet another personal project: a self-designed, stick-on decal, which reads ‘Make yourself at home’ – something that we are sure every visitor would be happy to do. 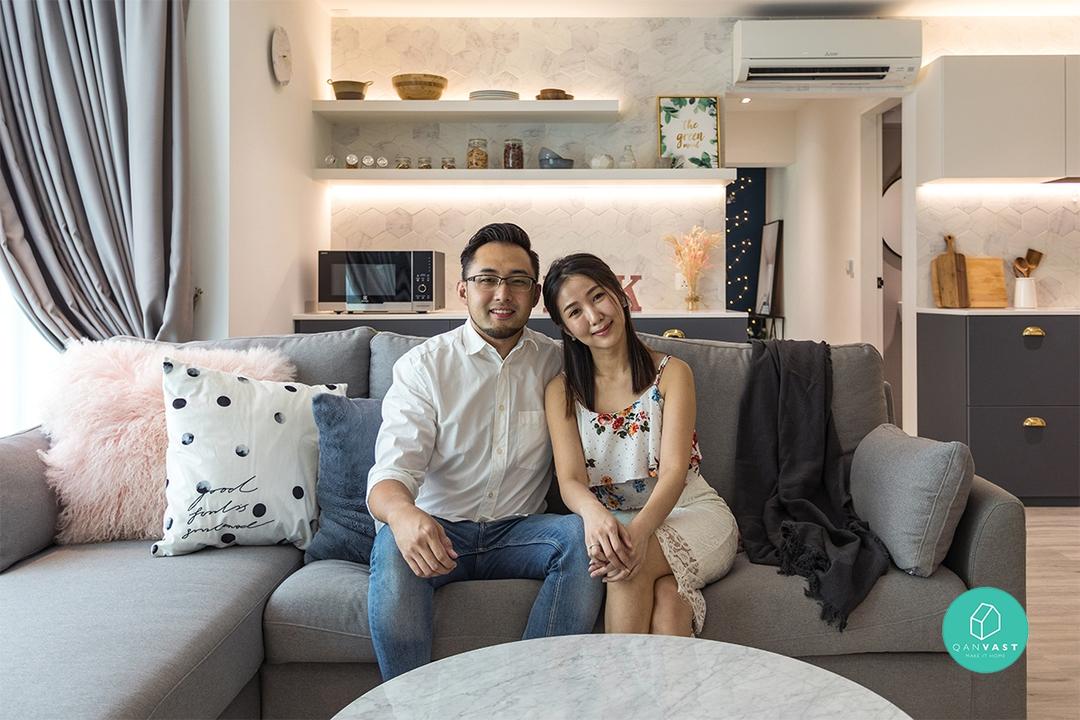 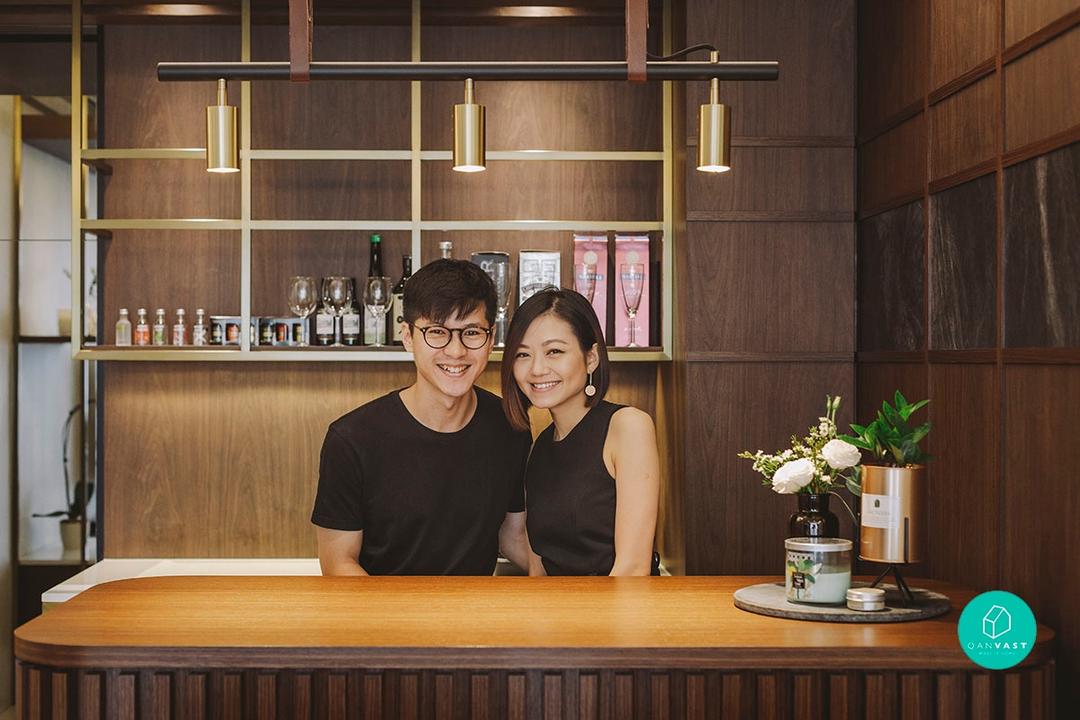 RENOVATION JOURNEY
A Couple Designed the Coolest Hotel-Themed Home (In a Day)
Inspired by hotel lounges and bars, Esther and Jayden knew right off the bat the look they wanted. Here, the couple opens the doors to their plush, mid-century chic pad. 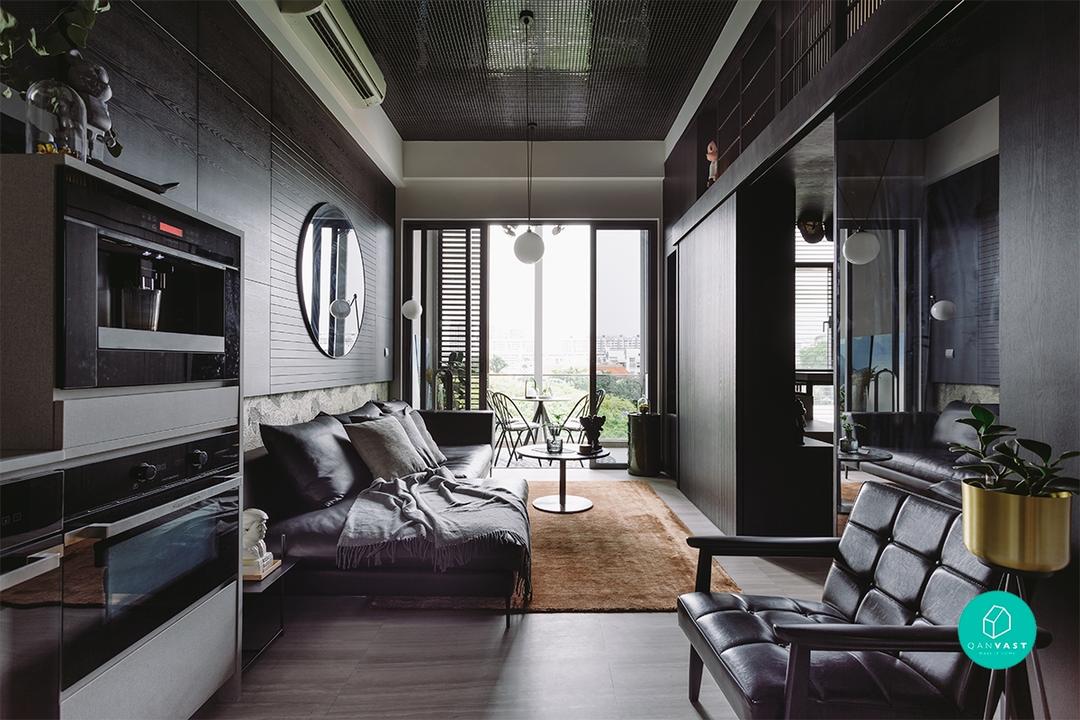 RENOVATION JOURNEY
No Lack of Black: How A Designer Built Her Edgy-Chic Loft
Set foot into Habit interior designer Denise’s dark, moody, but ultimately practical abode at Telok Kurau.
Preparing the next article…
Recommended for you