It’s Compact, But This 3-Room BTO Flat is Totally Hotel-Like

Peek into the perfect getaway for a young couple and their furry companion at Circuit Road.

Despite how Joan describes it, it’s hard to see the 3-room HDB flat which she shares with her husband and pet cat, Yumi, as a “get-married-and-BTO” starter home. A glimpse into its interior reveals a compact, yet meticulously designed space where every detail has been carefully chosen, down to the terrazzo accents built into a walkway study’s desk. 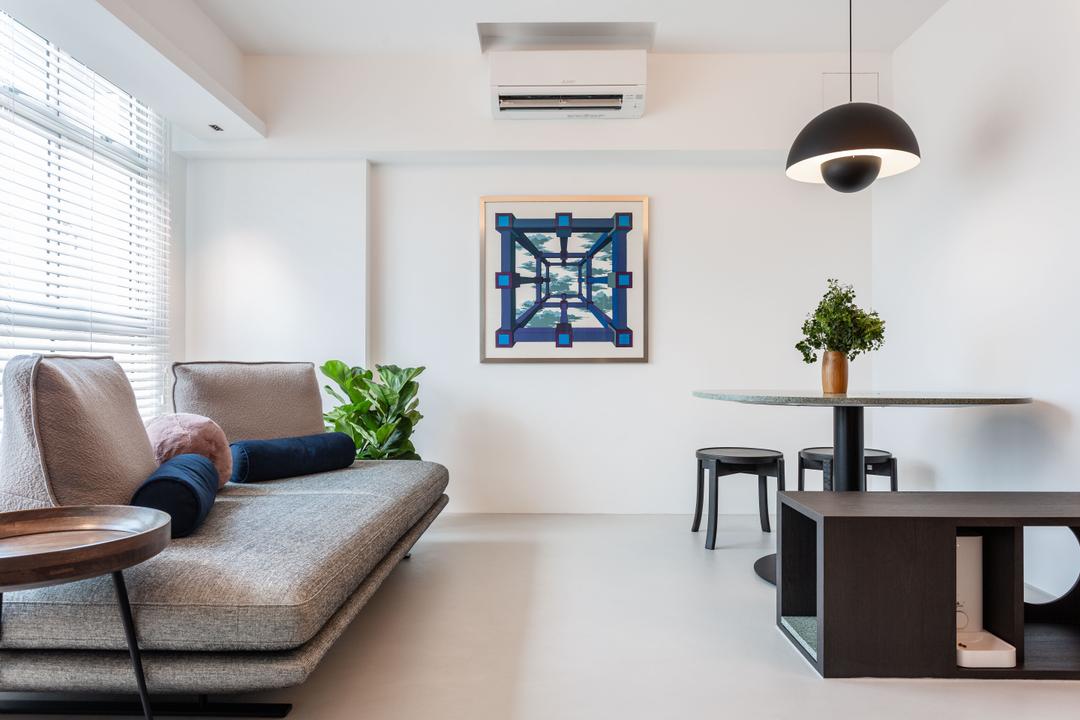 And just like a hotel suite that’s kitted out for a comfortable stay, all the necessities for living large in a small space were integrated into an efficient floor plan. “Basically, we wanted a home where every area and every bit of it is utilised,” says Joan. “That was the plan we had right from the start.”

To find out exactly what this entails, we sat down for a chat with Joan.

About herself and her home’s layout

Joan (J): This is my first home with my husband as newlyweds, and we opted for this three-room flat at Circuit Road because it’s in a location that’s convenient for us. It’s right in the middle of Ubi and Paya Lebar, plus there’s an MRT station nearby so we can get to work fairly quickly. 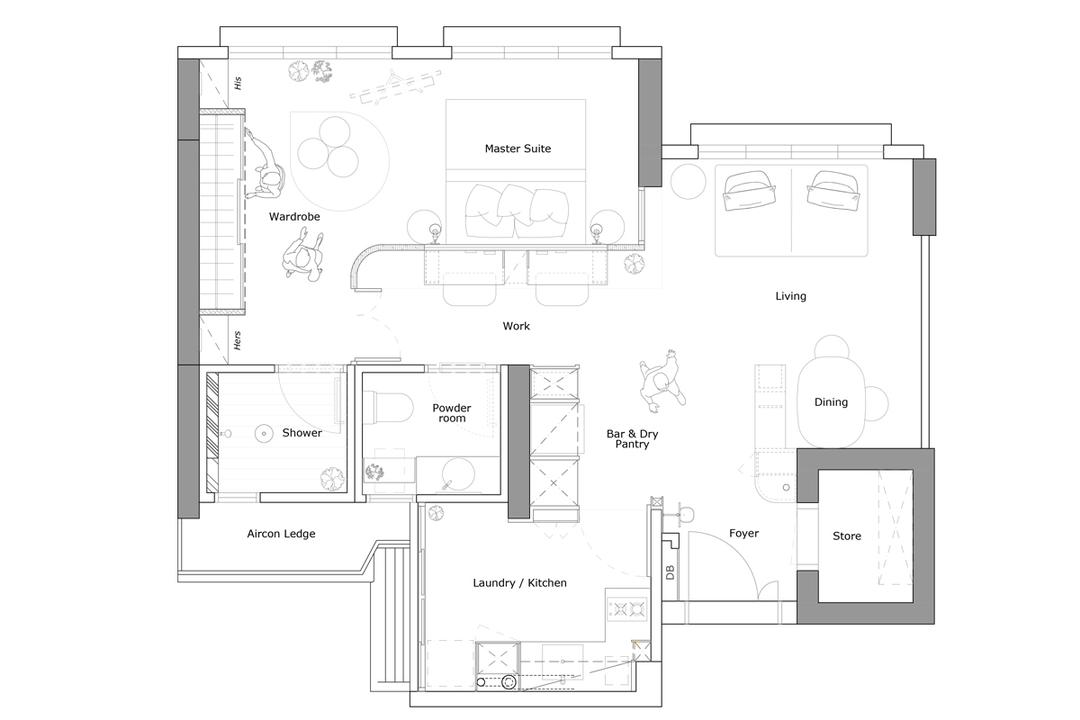 The floor plan of Joan’s home. 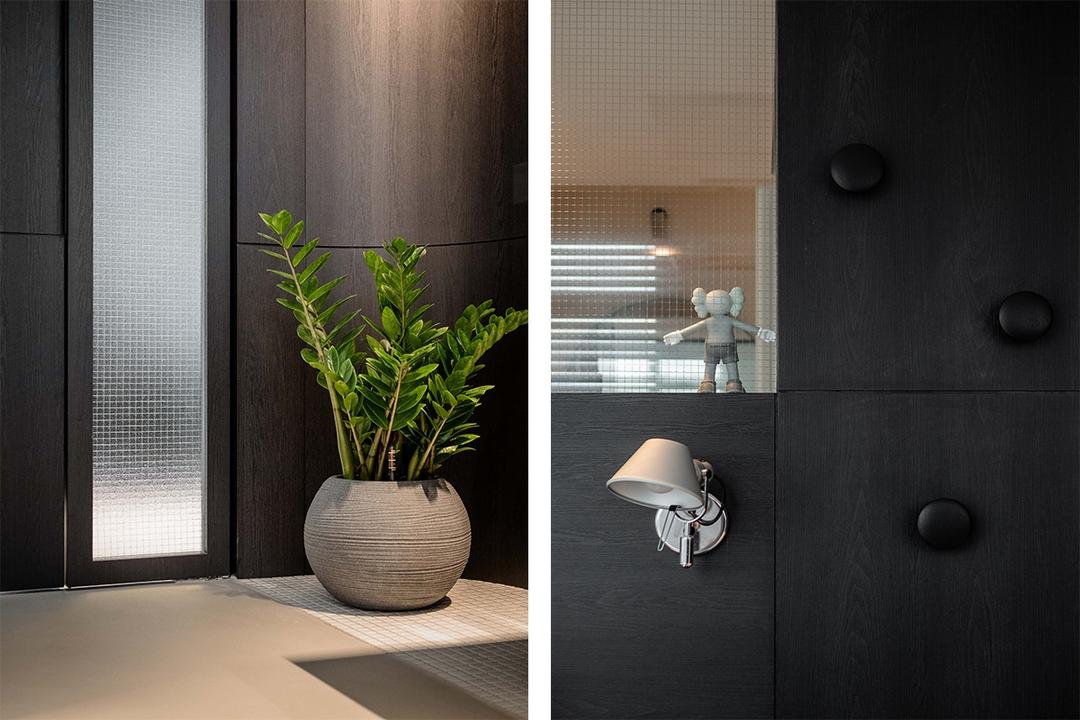 The aesthetic that we have right now is quite different from what we had in mind at the start. Because we’re new homeowners, we had all these ideas about how we wanted our place to look like based on what we saw on Qanvast, Pinterest and other sites, but when it all started coming together, we found ourselves opting for a look that’s more minimalist.

But then again, it probably isn’t right to call it ‘minimalist’ because there was quite a bit of work done for our home, even though there’s a focus on simplicity – the lines, the colours, and even the furniture were all chosen to create a sleek look that doesn’t look too cold.

On changes made to the entryway 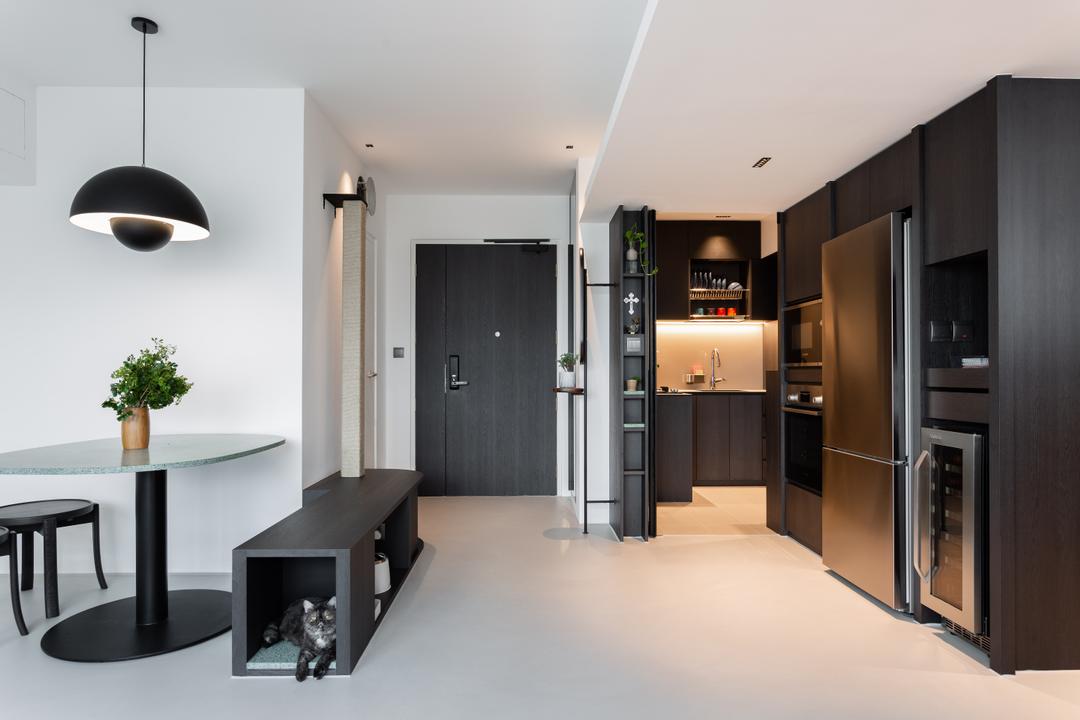 J: Our home was designed with all three of us in mind – two humans and one cat. So, we wanted a space where Yumi isn’t just an afterthought; it’s why we asked for a customised dining bench that has an integrated scratching post and a ‘room’ for her. This way, she gets to feel like she’s part of our family.

Other than that, we made some small tweaks to the entryway by adding a mirror, a hanging rack for umbrellas/coats, and a little key drop where we can also store our loose change as well as a couple of trinkets.

About the living and dining areas

J: When we first started planning out the communal area, our designers from Habit, Denise and Yanling, ran us through an exercise where we were asked to imagine how we see ourselves living in our home. It was through this process that we realised that the typical ‘showroom’ configuration wouldn’t work for us.

For instance, we didn’t end up getting a TV for our living room, because we felt that it should be an area for relaxation and conversation, instead of being a space where everyone’s glued to the screen – that would defeat the point of having gatherings with our friends and family in the first place. 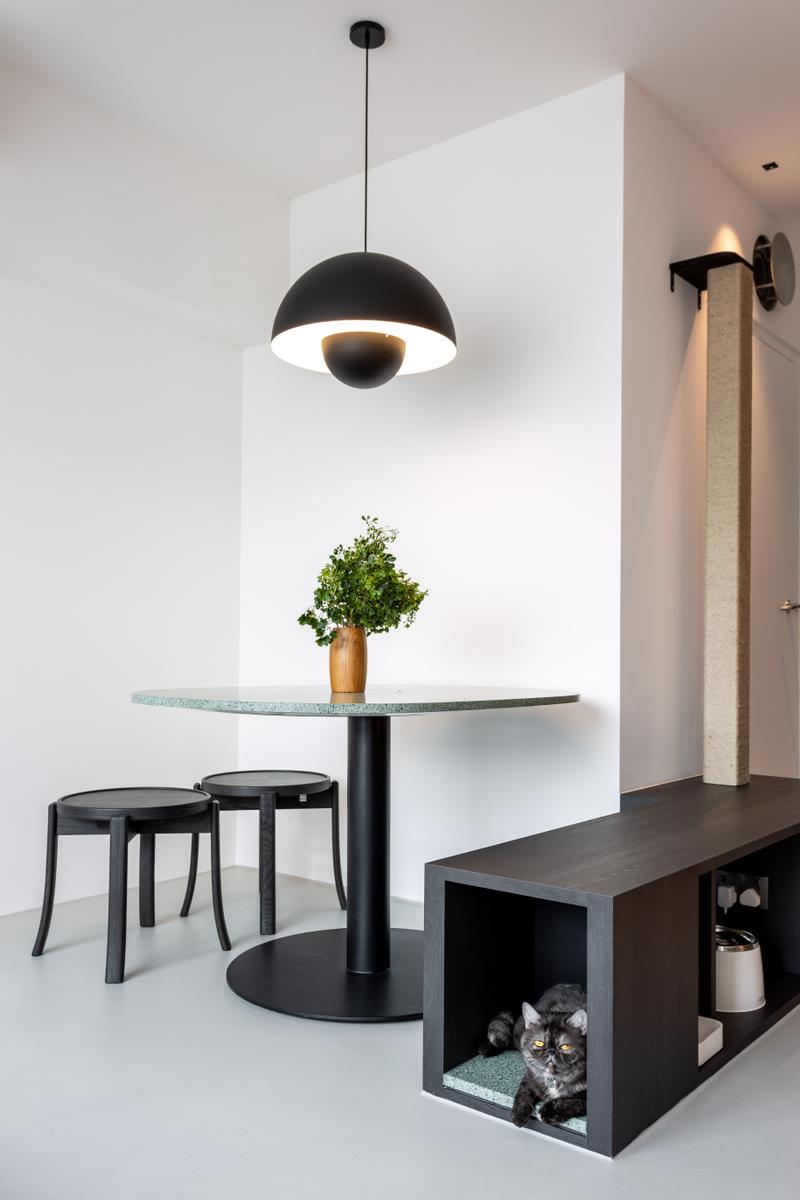 Moreover, because of the overall size of the space, we stuck to a simple setup for both the living and dining areas. For the living area, one of the highlights would be the sofa that we got from Ligne Roset, it isn’t chunky, and it has a modular back that gives us more flexibility.

As for the dining area, we got a customised table to maximise the number of people that we could fit around it; it’s made from a terrazzo slab from Hafary, and Habit used the excess to create little accents that are integrated into various built-ins around the house.

On the kitchen’s new look and built-ins

J: We chose to keep the exterior of the kitchen as it is, so there was no hacking involved. The whole space is long and rectangular on the inside, and we chose to keep the original tiles that came with the flat, instead of sticking with cement screed, which is used for the flooring from the entryway all the way to the bedroom.

Other than that, we also asked for a customised door that serves two purposes: It allows us to do heavy cooking and it also lets us keep an eye on Yumi when we’re in the kitchen because it has a transparent glass panel at the bottom. 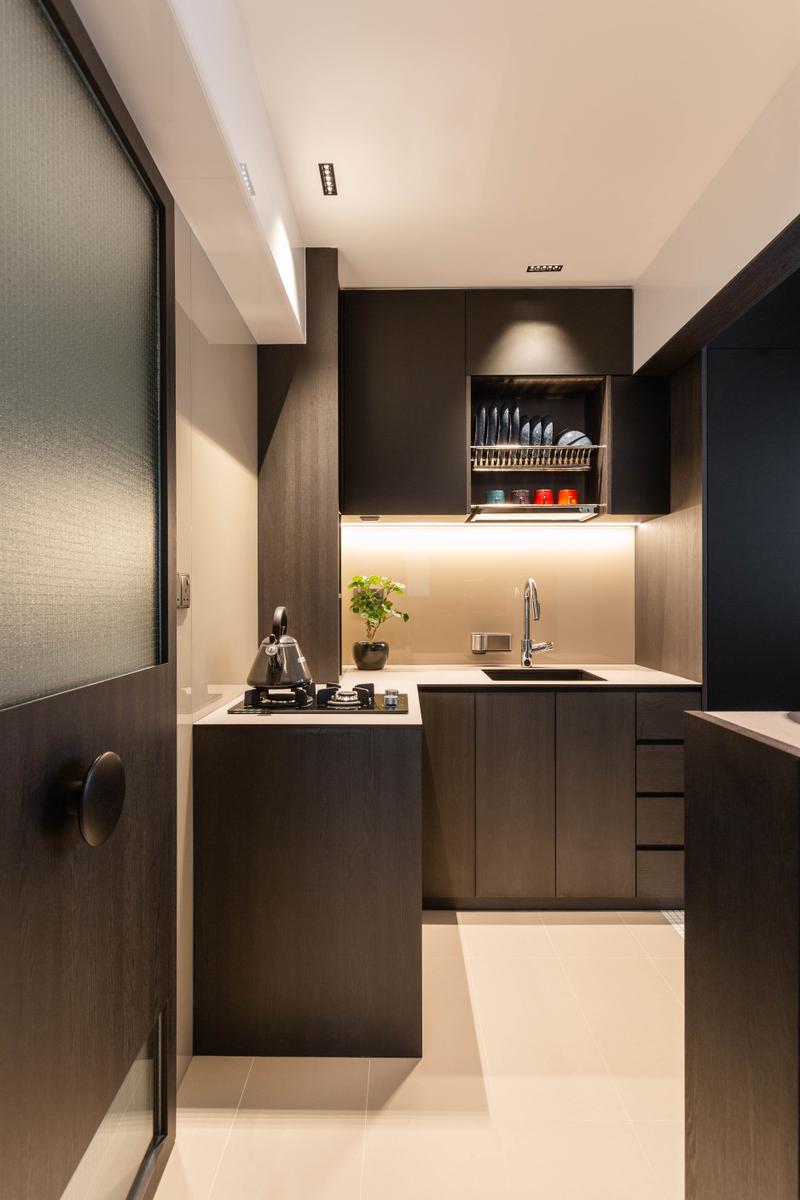 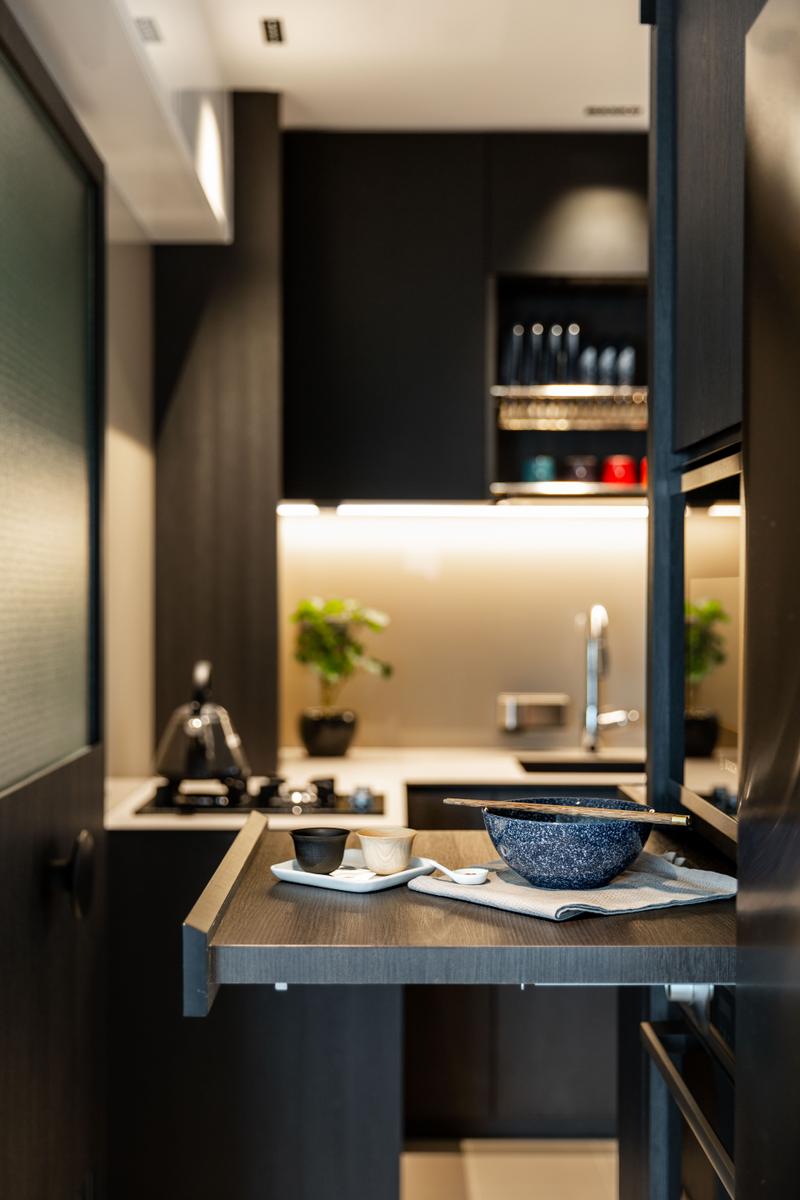 We chose to install most of our appliances, like the fridge, microwave and oven, along a wall on the outside because that would give us a bit more freedom to move about inside the wet area. The appliance/storage wall also has these tiny pull-out shelves that we can use as additional prep counters. Personally, I like using the extra space for resting bread loaves after I’m done baking.

About the walkway study’s design 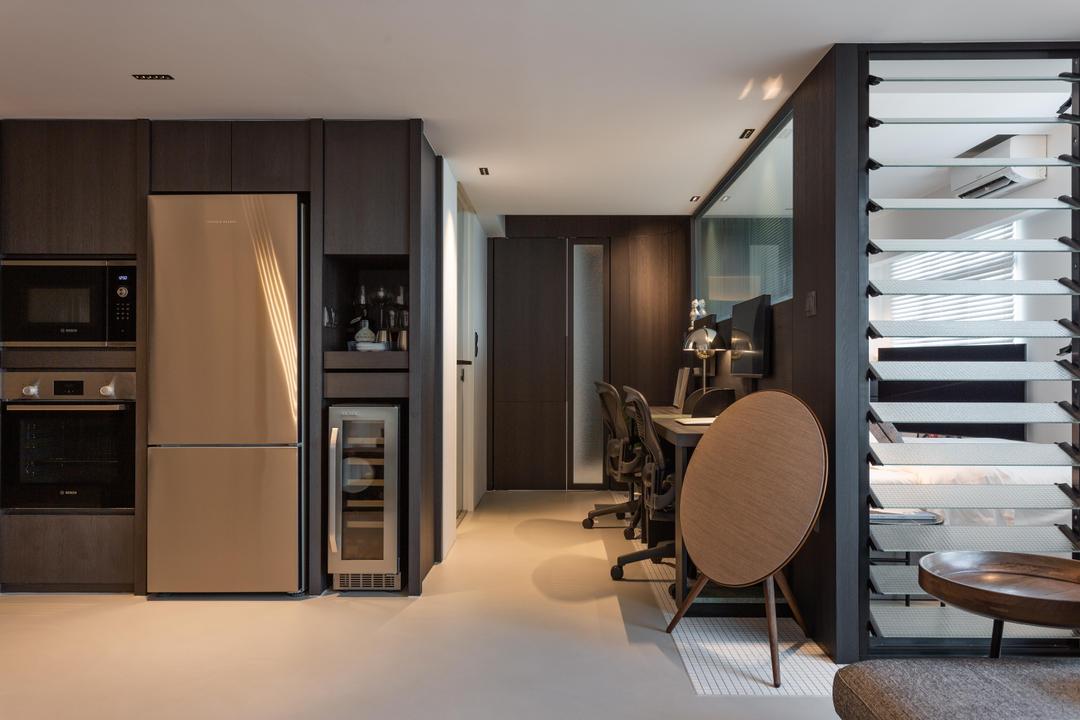 J: Most people would assume that a lack of space is the reason why we have our study along the walkway instead of inside our bedroom, but the fact is, the bedroom is actually larger than usual because we got Habit to merge two rooms together. That said, we did request to widen the hallway a little for the study desk, which was done by setting the partition wall further into the bedroom. 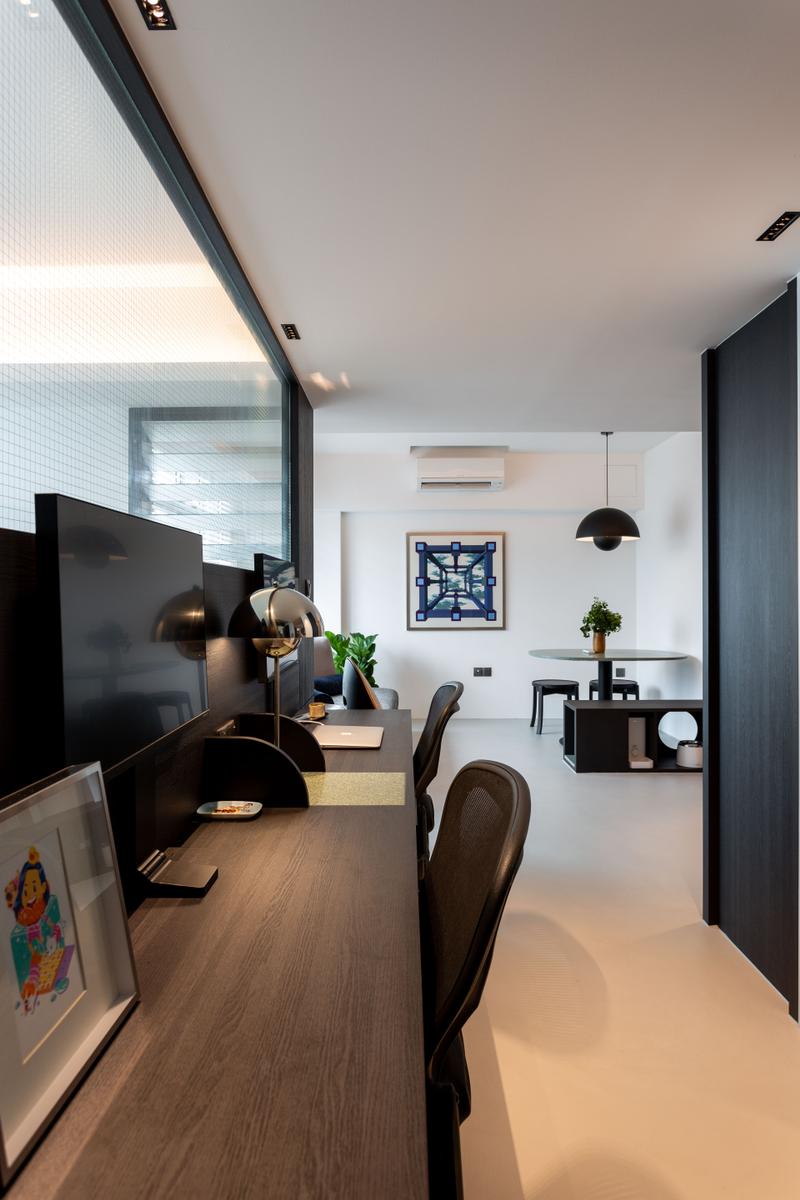 So, the actual reason for the study’s configuration is because we felt that it would be more interesting, and it could even be a talking point for our guests when they come over. Plus, because of our work habits, we prefer spending our time in a place where we can have everything within easy reach.

About the master bedroom’s renovation

J: The master bedroom is probably the most interesting space in our home because of how it’s configured. We like the look of open-concept studio apartments, but at the same time, we also value our privacy. So, instead of walls, Habit built a set of louvered windows right beside our bed that we can open and close as we please. 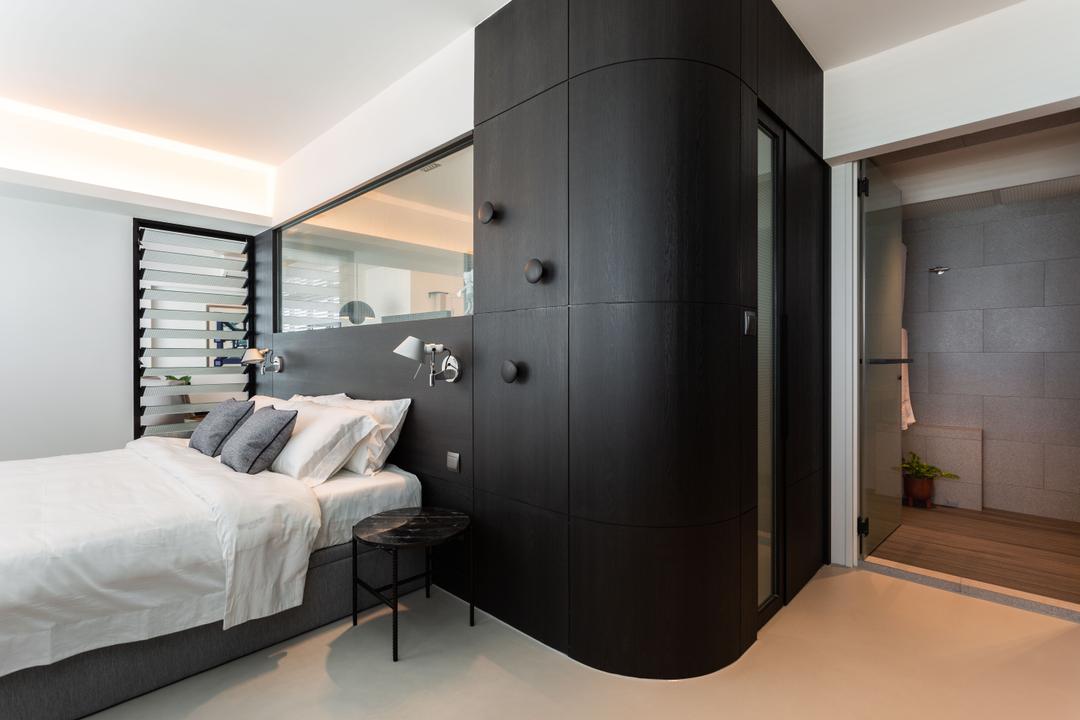 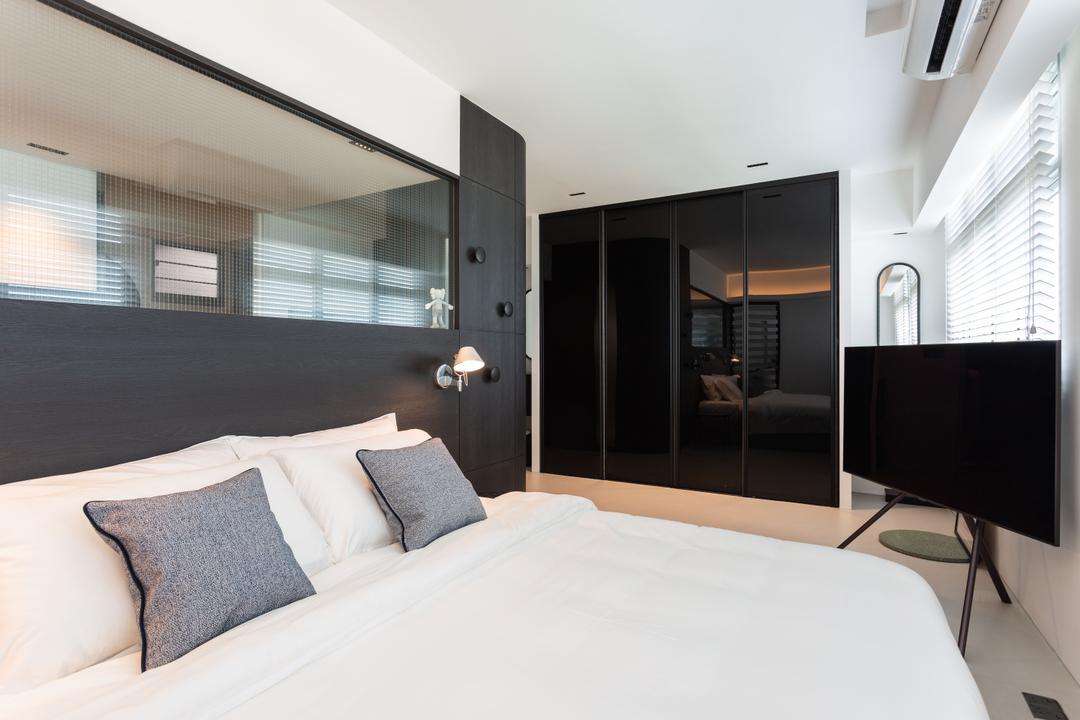 The curved profile of the divider wall on the inside was somewhat of a surprise for us. Initially, we thought it would have a typical angular look, but because it’s made of carpentry, there was the option of giving it a more rounded design that looks more unique.

Even though our bedroom is an expanded space, we still made sure to properly maximise it with storage fixtures and proper planning. Our bed has a compartment beneath it and our his-and-her dressers are built into the corners of the room, so every area is fully utilised. 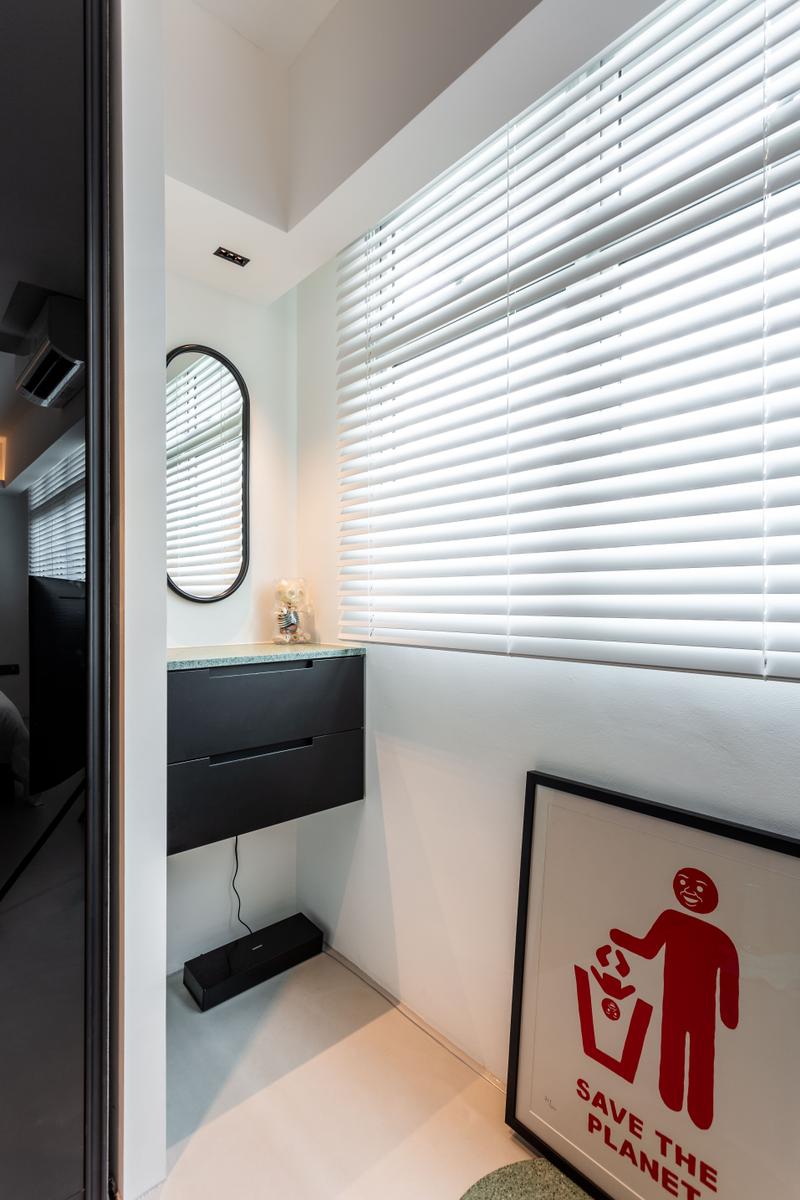 On the common bathroom’s and master en suite’s makeover

J: It took quite a bit of time for us to settle on the idea of having only one WC in our home. Even though we knew that we wanted separate powder and shower rooms right from the start, many of our friends were like, “Are you sure? There’s only one toilet bowl!”

But in the end, comfort was what convinced us to take up this decision. If we were to keep the shower in the powder room, it would be too cramped and vice versa for the shower room if we kept the WC in it. 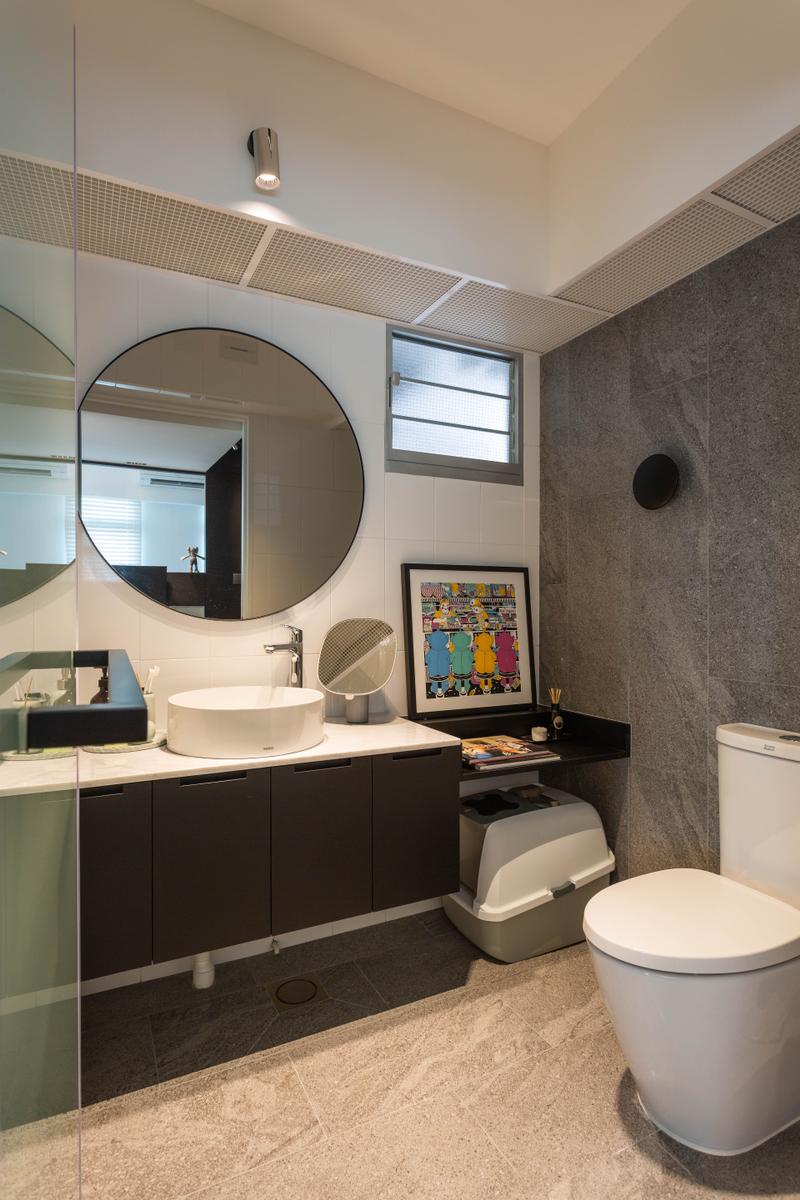 For the powder room, which is our common bathroom, we chose to overlay stone tiles over the existing ones to give the space a more rustic look and we maximised the extra space that we got from removing the shower to build in a large suspended vanity, together with a nook for Yumi’s litterbox. 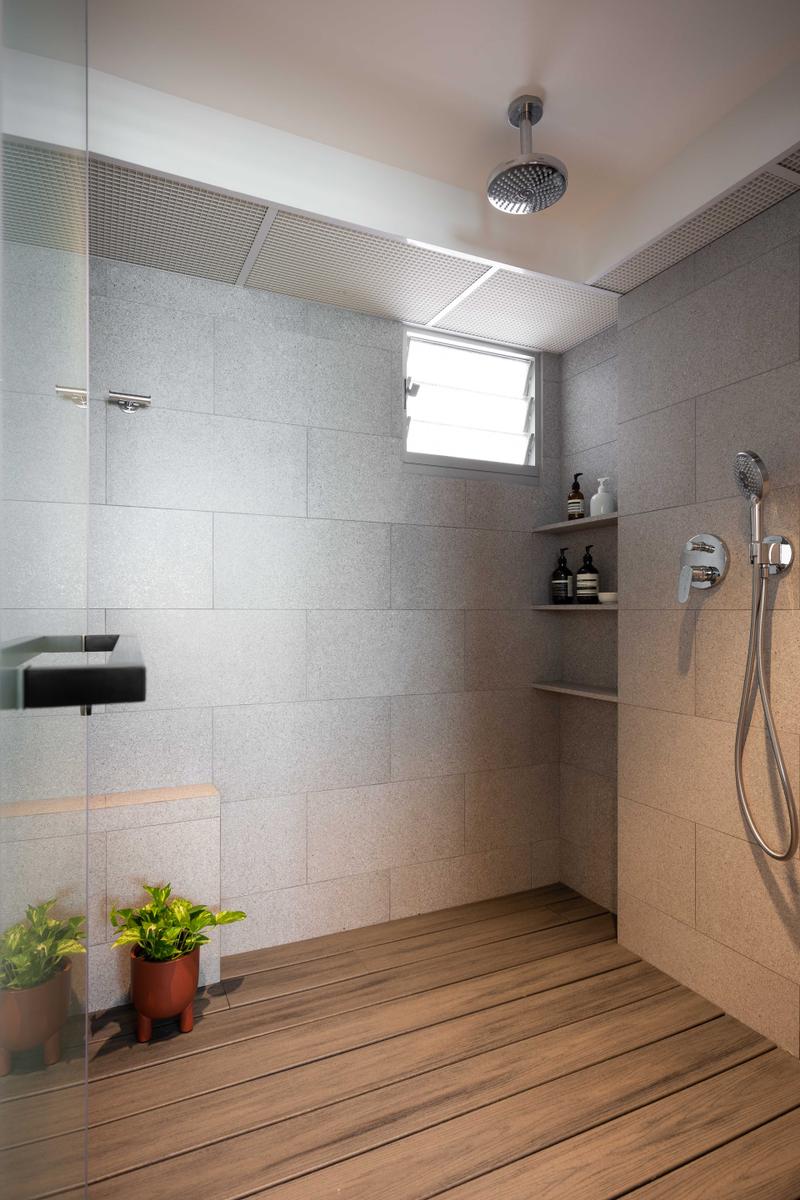 The master en suite is where the shower room is, and we chose to build a composite wood deck to give it a more outdoorsy vibe; it’s designed with a customised foundation that has a clip-on system, so we can easily remove the planks to access the floor traps and tiles underneath for cleaning.

J: As new homeowners, renovating a flat for the first time was a daunting task but Habit made the process easy and seamless. We were excited about the renovation so we were quite hands-on throughout the entire process, but if we hadn’t found a helpful design firm like Habit, I think it would be a lot harder.

For instance, when you go into a furniture or homeware store, the sheer amount of choices would just shock you if you’re a first timer. But Denise and Yanling were like our personal shoppers who would lay out the options that they've shortlisted for us. 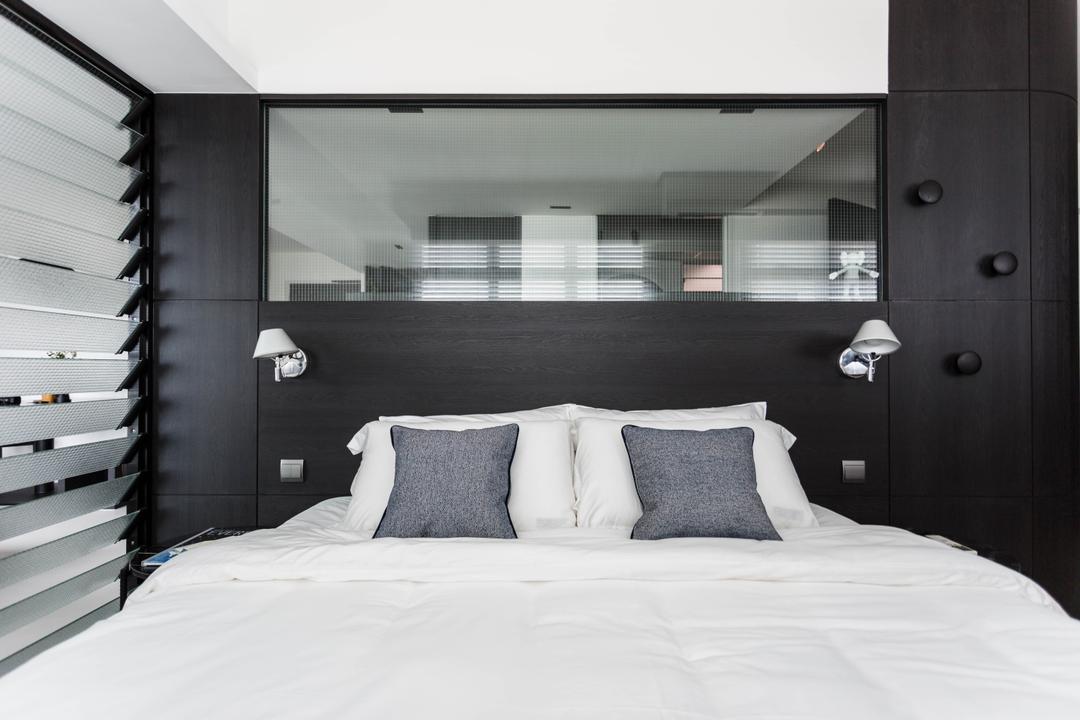 Overall, my husband and I both love our flat and living in it has allowed us to appreciate the comfort and space that it offers, so much so that I can’t relate to people who tell us that they don’t enjoy working from home! [laughs]

RENOVATION JOURNEY
This Dreamy Telok Blangah Home Isn’t Your Typical HDB Flat
Think all BTO flats are cookie-cutter? This 4-room home by 19EightyThree and its Memphis-inspired décor will blow away ALL of your preconceptions. 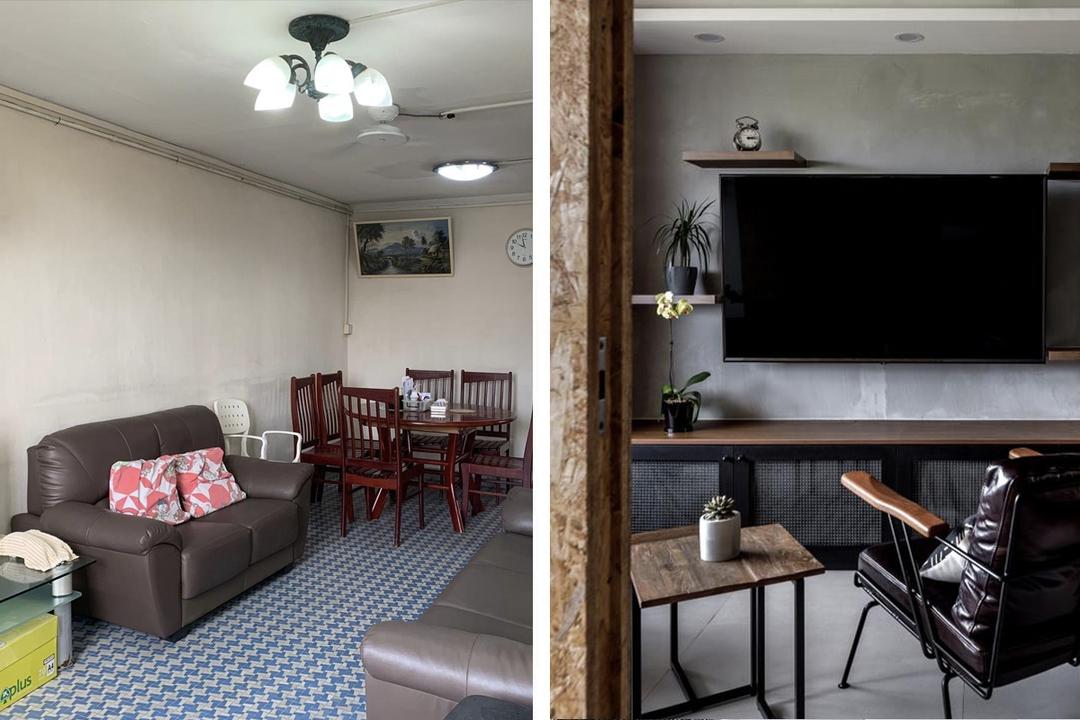 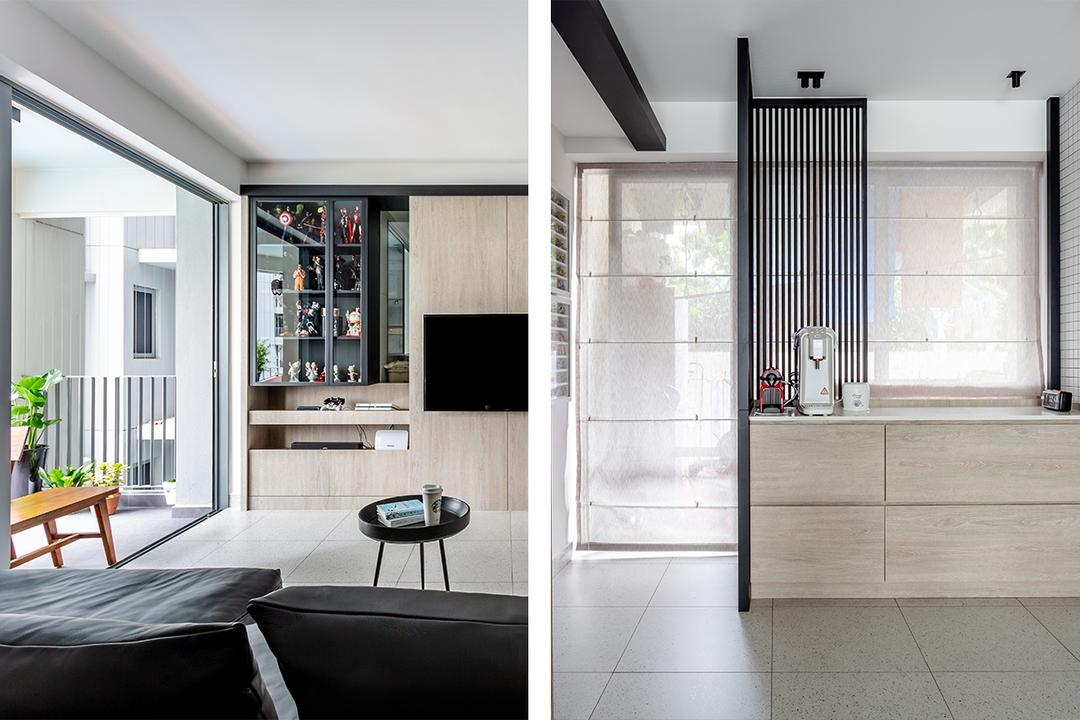 RENOVATION JOURNEY
Instead of Moving, This Family Renovated Their Tampines Home
Moving was an option for this family, but instead, they chose to give their condo apartment at Tampines@Arc a complete makeover.
Preparing the next article…
Recommended for you 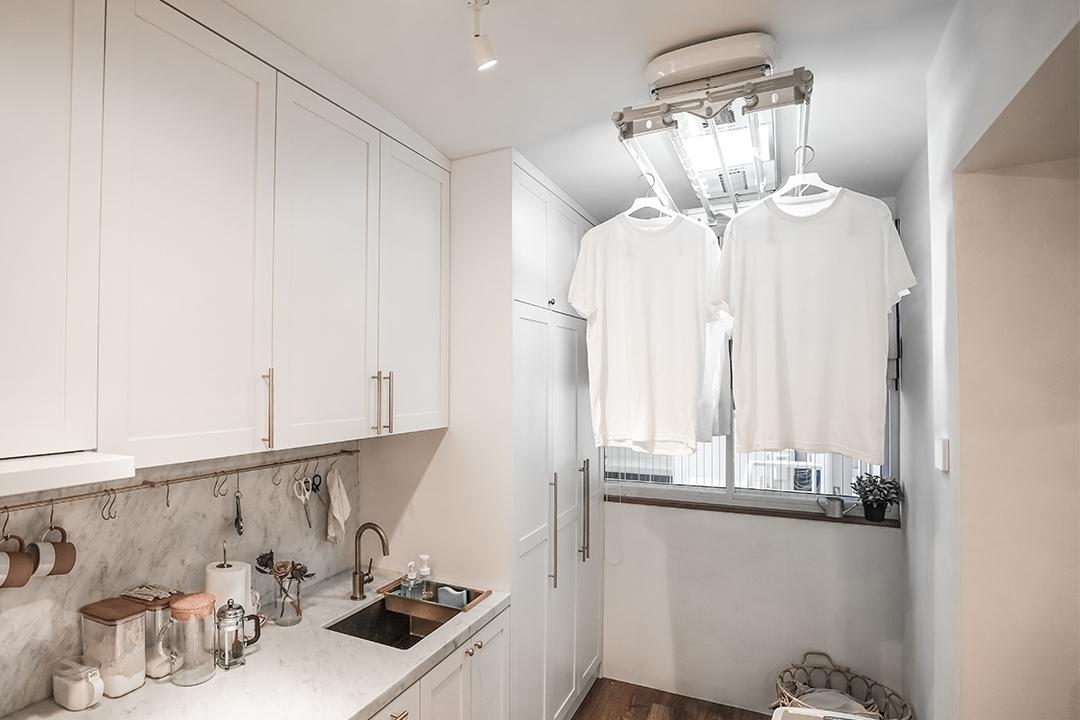 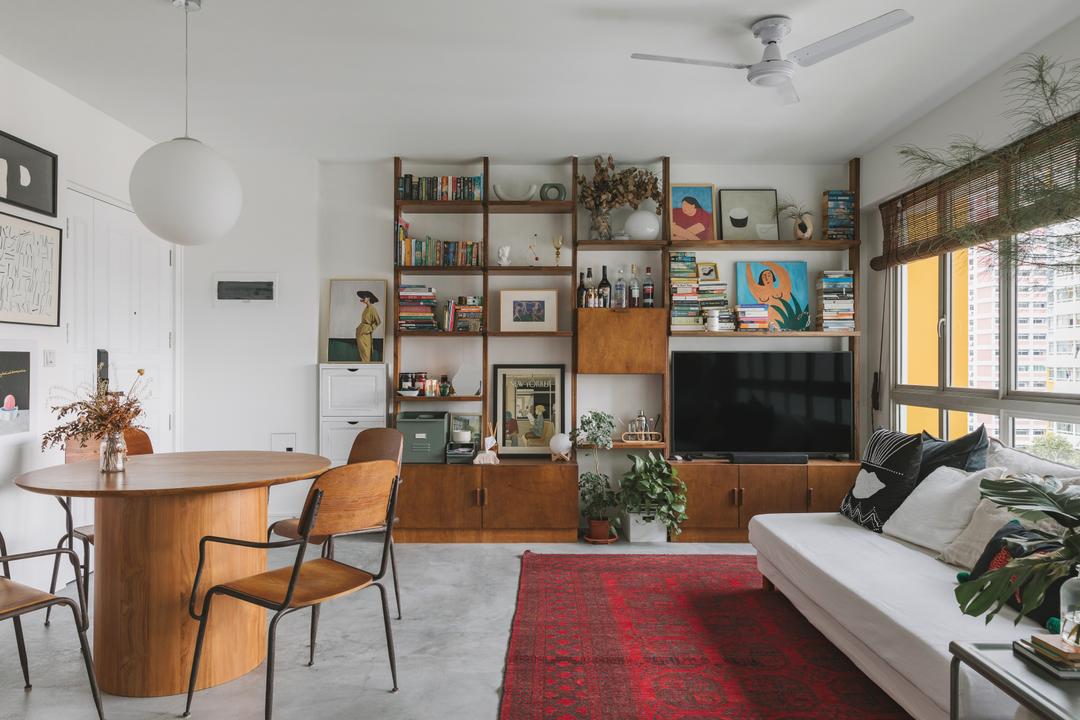