Vibrant colours and long, uninterrupted stretches of space go together to create this wellness-orientated couple’s nest.

Back in 2020, Dion, who is a clinical psychologist, and his wife Acacia went hunting for a suitable house to be their (then future) couple’s nest. And after an extensive search across the island, they managed to find this 149 sqm executive maisonette, located in western Singapore.

The natural next step, then, was to get the entire house renovated. The couple’s vision of a dream home? A cheery, spacious flat with long, clear sightlines, unblocked by any walls, furniture, or built-ins. 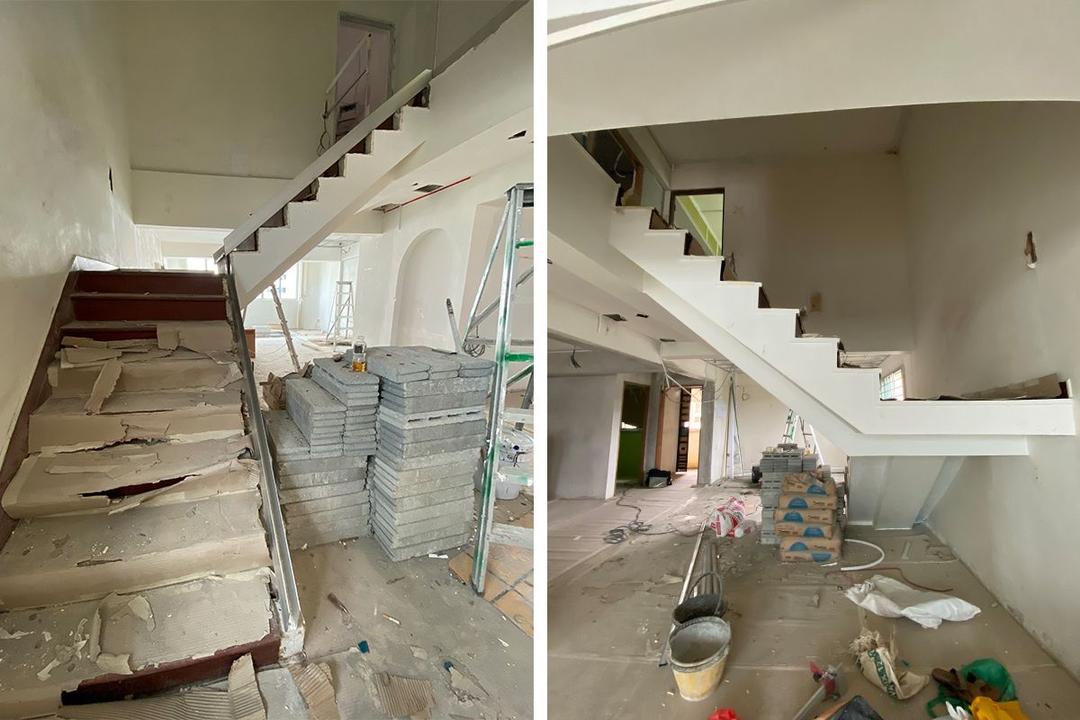 Openness aside, what also influenced the design of Dion and Acacia’s home was their knowledge of mental wellness. “Acacia and I work in the same line. So, our well-being is a factor that we took into consideration (when renovating our home), because we’re aware of how important it is,” shares Dion.

So, to find out exactly how the environment of this couple’s nest, which was designed by Third Avenue Studio delivers on both aesthetic and health fronts, we had a chat with Dion! 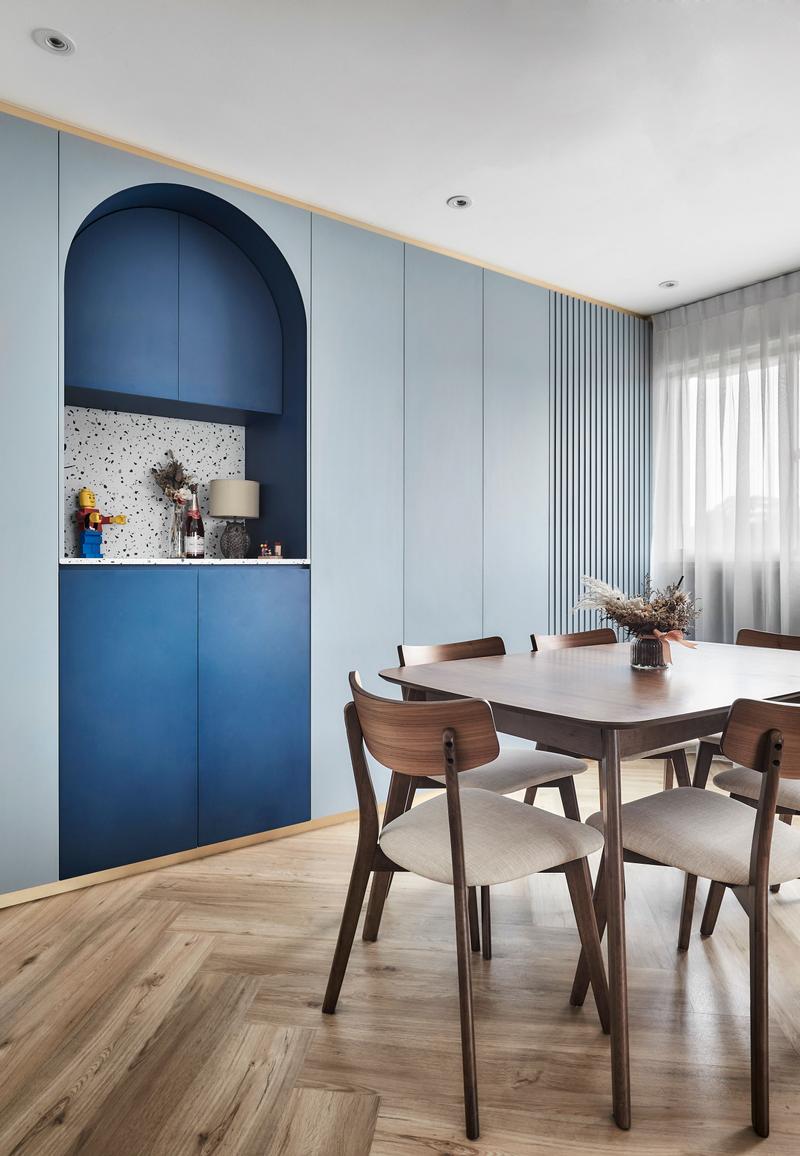 Dion (D): I would say that we were quite easy-going with the entire design process, although there were some things which we wanted, such as a striking look that incorporates contrasting colours.

In terms of the layout, we wanted the whole house to be open, so it feels big, airy, and comfortable. I think it’s also because of our line of work that we wanted a home which lets us feel relaxed immediately after we step in. 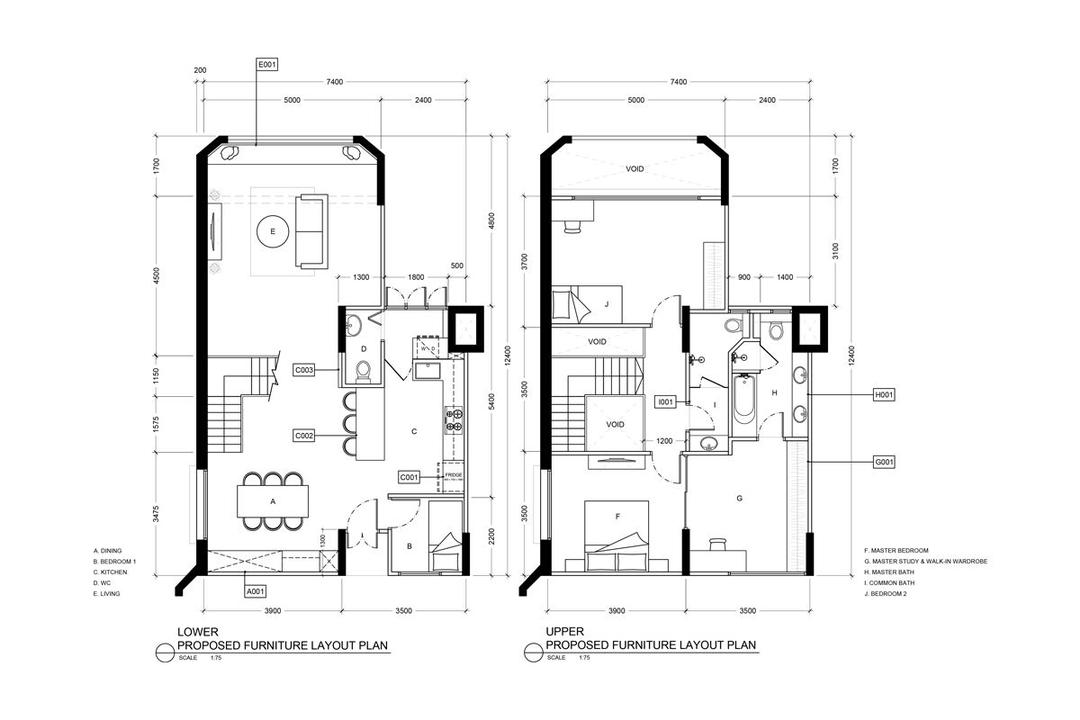 The floor plan of Dion and Acacia’s maisonette, post-renovation.

Before we found this house, we looked at quite a few properties, including executive apartments and condos, as well as homes in other locations. But since a staircase was a feature that we really wanted, we ended up choosing a maisonette because it’s the only type of HDB flat that comes with one. 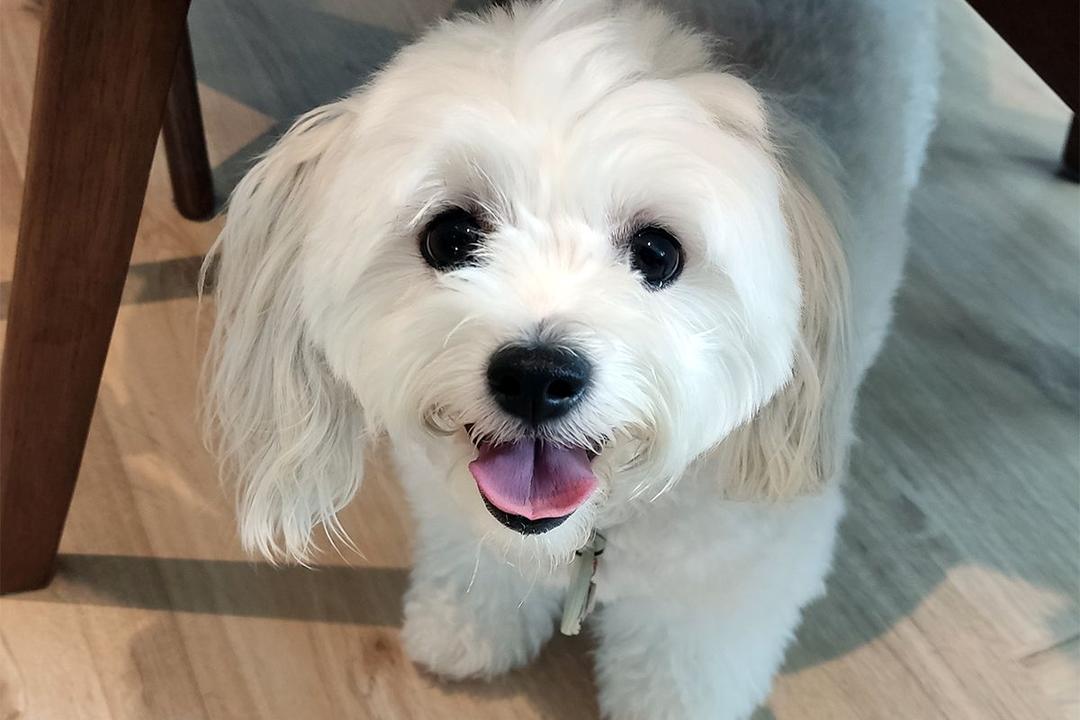 We were also looking for a larger unit, basically 5-room and above, partly because we wanted more space for our pet dog to run about. Her name is Muffin and she’s a chihuahua poodle.

WATCH: Homeowners Dion and Acacia take us through the flat’s renovation

About the dining area and kitchen’s makeover

D: The idea to have pink walls in these areas came about because we wanted to inject some life into the surroundings; the blue came later, and at first, we were uncertain about including it because of the strong contrast the combination would create.

But eventually, we decided to give this colour pairing a try because Third Avenue Studio showed us what it would look like in 3D, and the result was quite good. 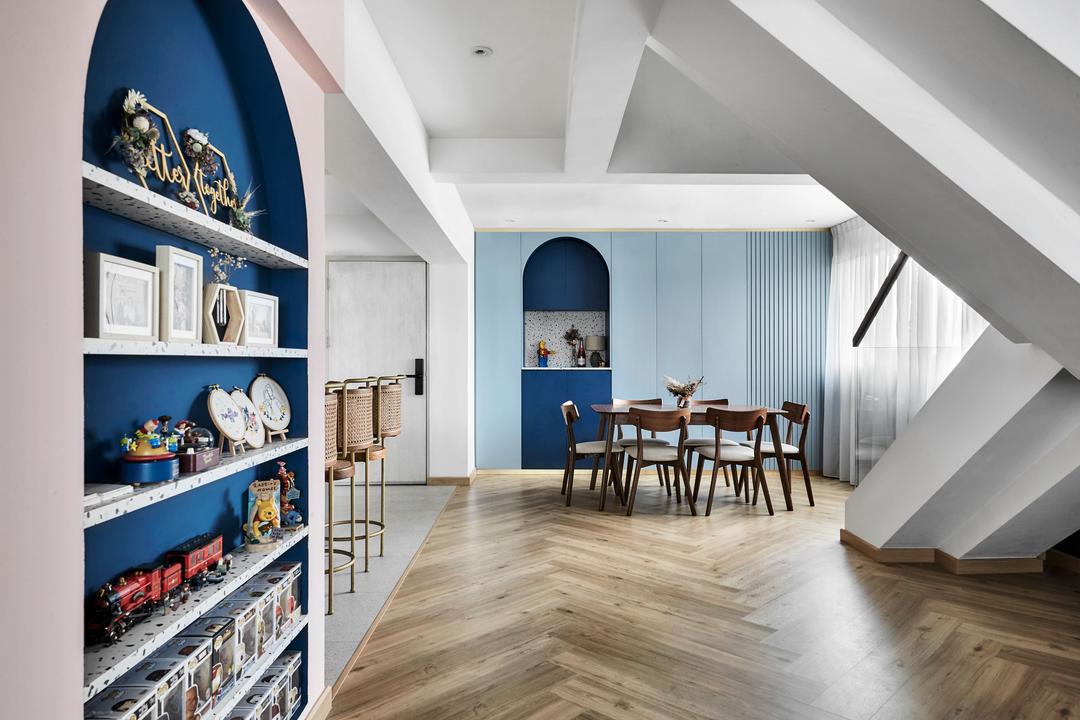 A blue-on-pink shelf stands out in the house. “We don’t really have any plans for what to put on display, so we have all sorts of knick-knacks there like Funko Pops,” says Dion.

We chose to have a dining table as well as a peninsula/bar counter because this setup gives us the most flexibility; the dining area is for when our relatives come over, with the blue cabinets functioning as sort of a decorative backdrop.

We really like the grooves in the cabinet doors closest to the windows because they help introduce more character to the space without making it look too loud. Same goes for the arched, built-in shelves near the main door and beside the kitchen.

A long peninsula adds storage and dining space. “We wanted to form a kitchen triangle, and these peninsula drawers help keep our crockery and utensils within reach,” says Dion.

The kitchen wasn’t as big as it is now because it was closed off before the renovation. We had the partition walls knocked down and levelled out the floor in the kitchen so that it would be the same height as the rest of the spaces on the ground floor.

We wanted a highlight in the kitchen as well, so we got graphic tiles for the floor, which we framed with plain grey ones to make them stand out more.

D: Before we renovated the house, there used to be a balcony at the farthest end of the first floor, but we decided to remove it and level it out like we did with the kitchen, before merging it with the existing living room to get an even bigger communal area. 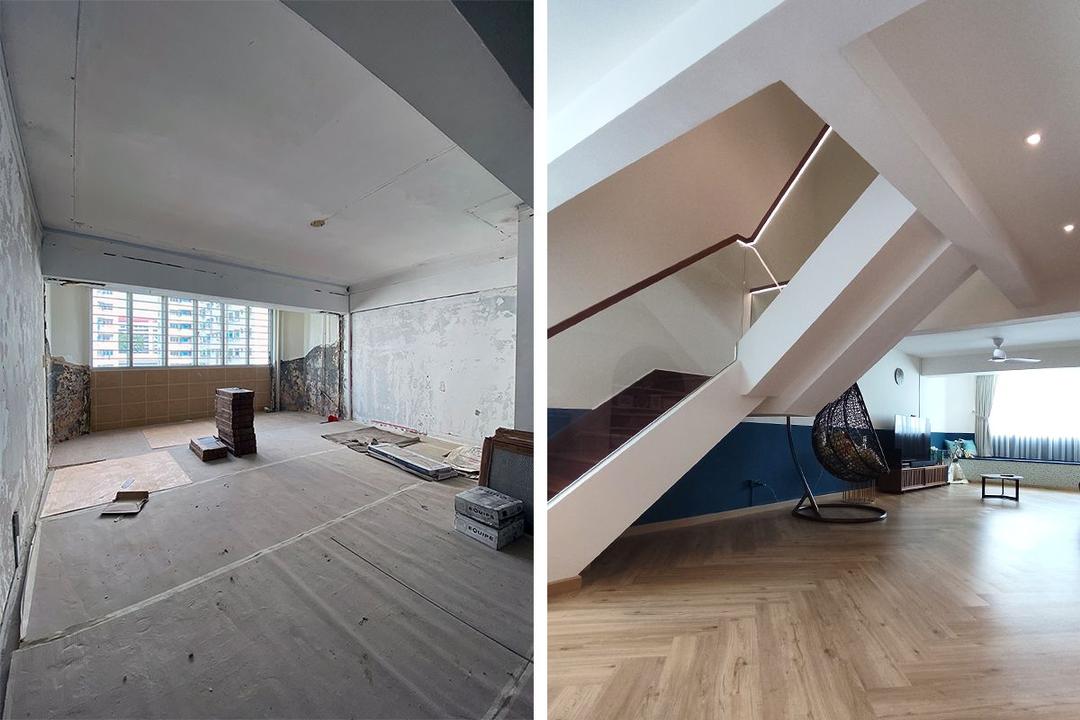 The living room before (right) and after (left) the renovation.

When we began planning the living area’s design, we started off with sort of a minimalist layout and then we started adding more features along the way.

Initially, we wanted only a TV console and a large, open space with just bean bags for seats. But in the end, we realised that a sofa was necessary because it would make it more comfortable for our guests and Muffin to hang out with us.

Also, to emphasise the length of the whole space, we chose to have seamless herringbone flooring as well as a blue-and-white half wall that continues throughout the entire first floor, from the dining area all the way to the end of the living area. 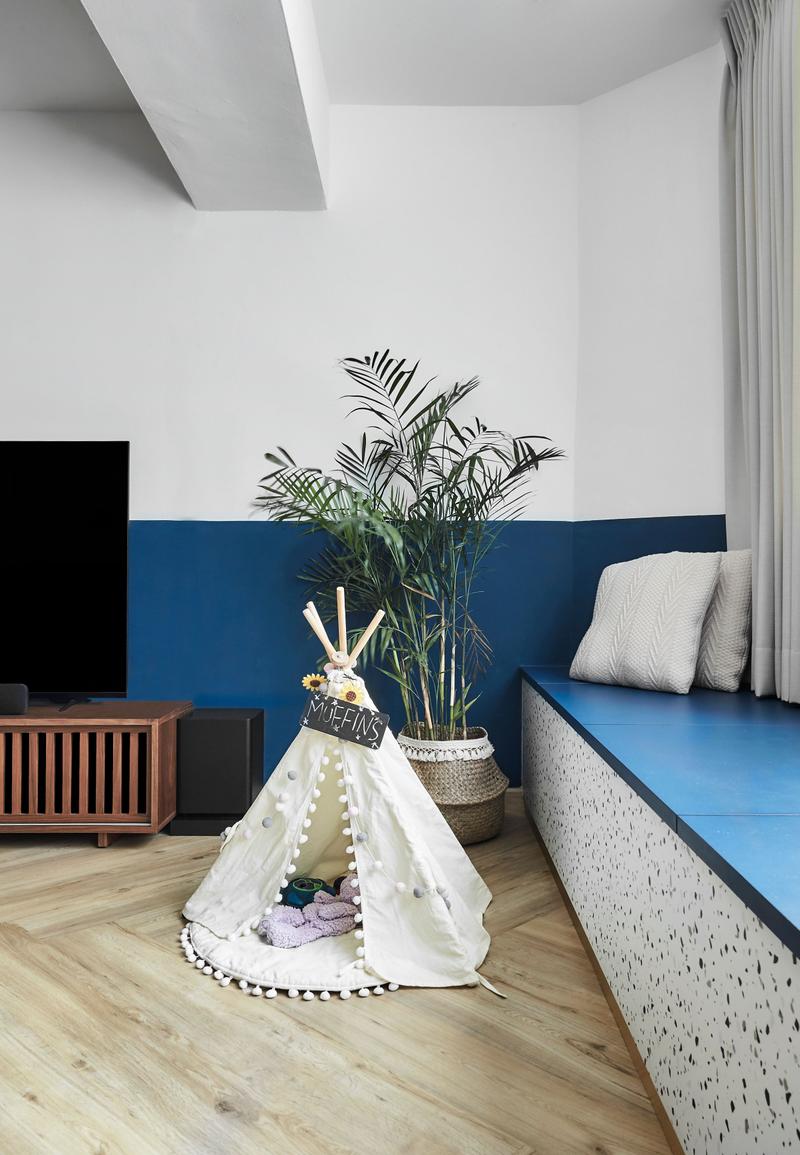 We requested for bay window seats in the living room too, both because we wanted extra storage space and a cosy corner where we can enjoy all the natural light and wind coming in from the windows.

On revamping the staircase and common bathroom 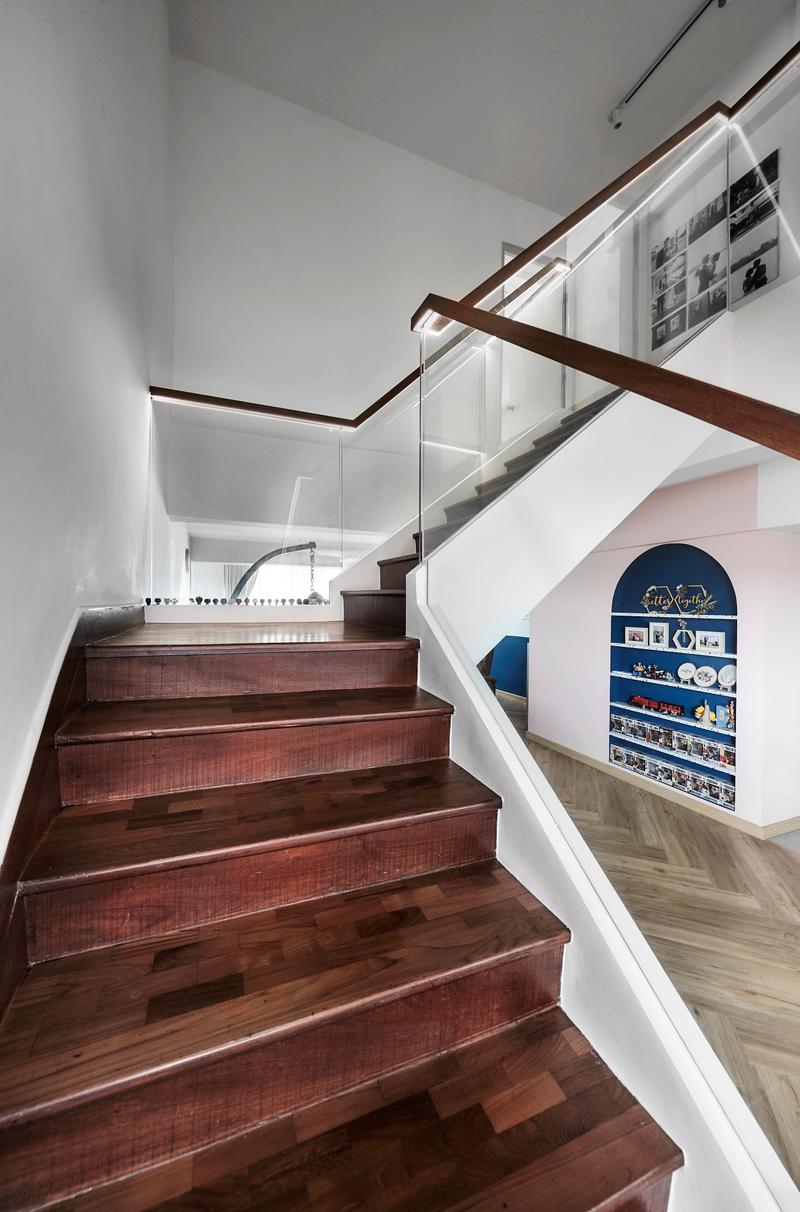 D: The parquet steps of the staircase were the only original feature that we kept because it would be a bit of a waste to replace them. For the most part, they were in good condition, and we changed only the bits that had some wear.

We also went with glass balustrades for the staircase for a seamless look. Also, though we didn’t plan to have wooden grab handles initially, we installed them later after realising that they would prevent fingerprints on the glass, followed by the LED lights in the handles for safety reasons. 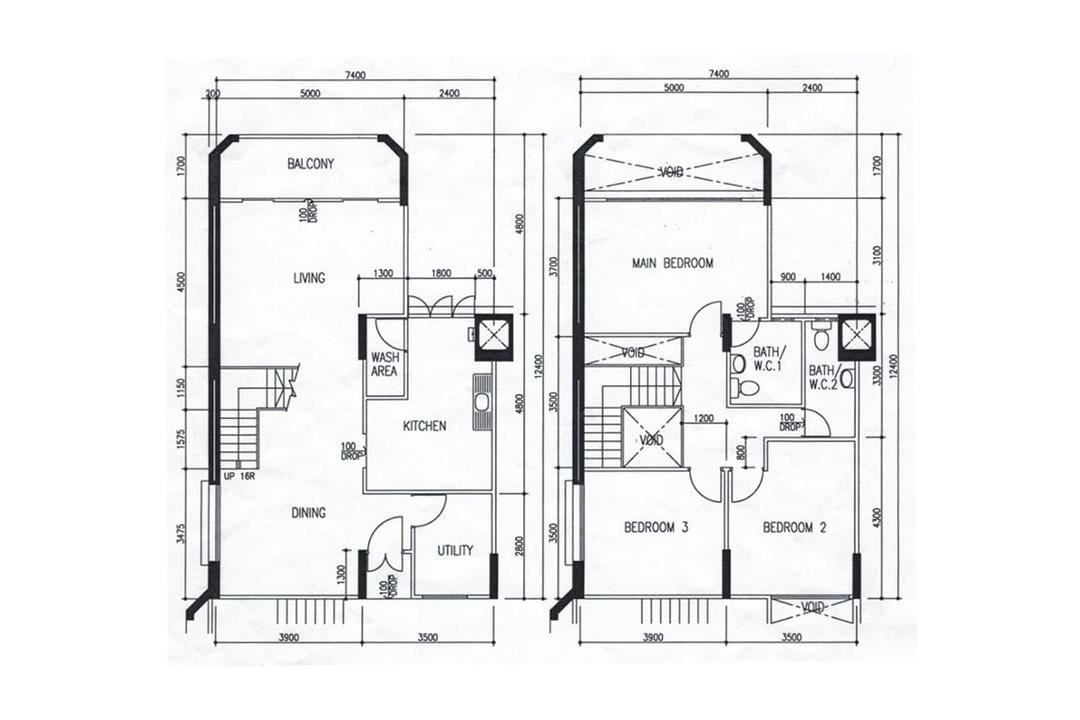 The floor plan of Dion and Acacia’s maisonette, pre-renovation.

If you were to look at the original floor plan, you’ll see that the second floor is different from what it is now. We actually modified it quite a bit, including the common bathroom.

The new entrance to the common bathroom, mid-renovation.

Previously, the common bathroom was accessible only via the original main bedroom, this is because it was an en suite before the renovation. But we remodelled it, sealed the original entrance, and opened a new one along the walkway where our wedding photos are hung.

This change allows our guests access the common bathroom without first having to go into a bedroom, and it also gives us more space for our current en suite. 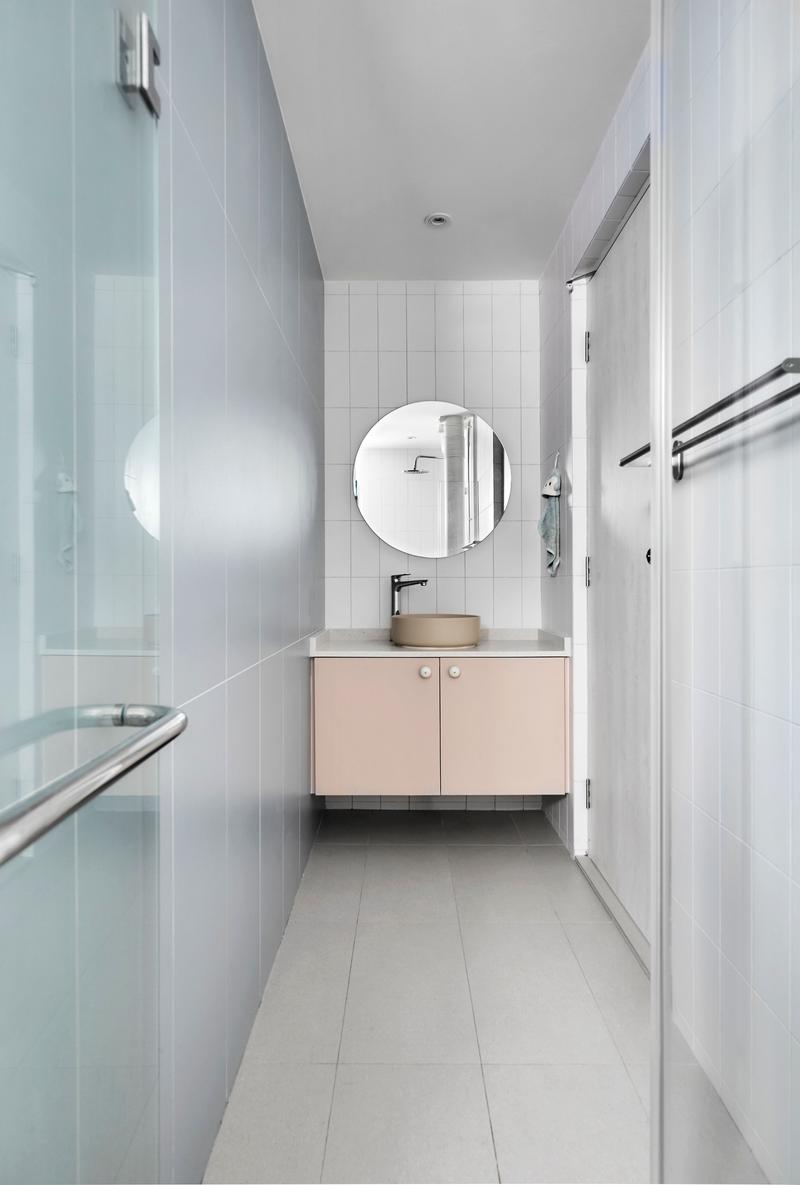 About the master bedroom and walk-in wardrobe’s renovation 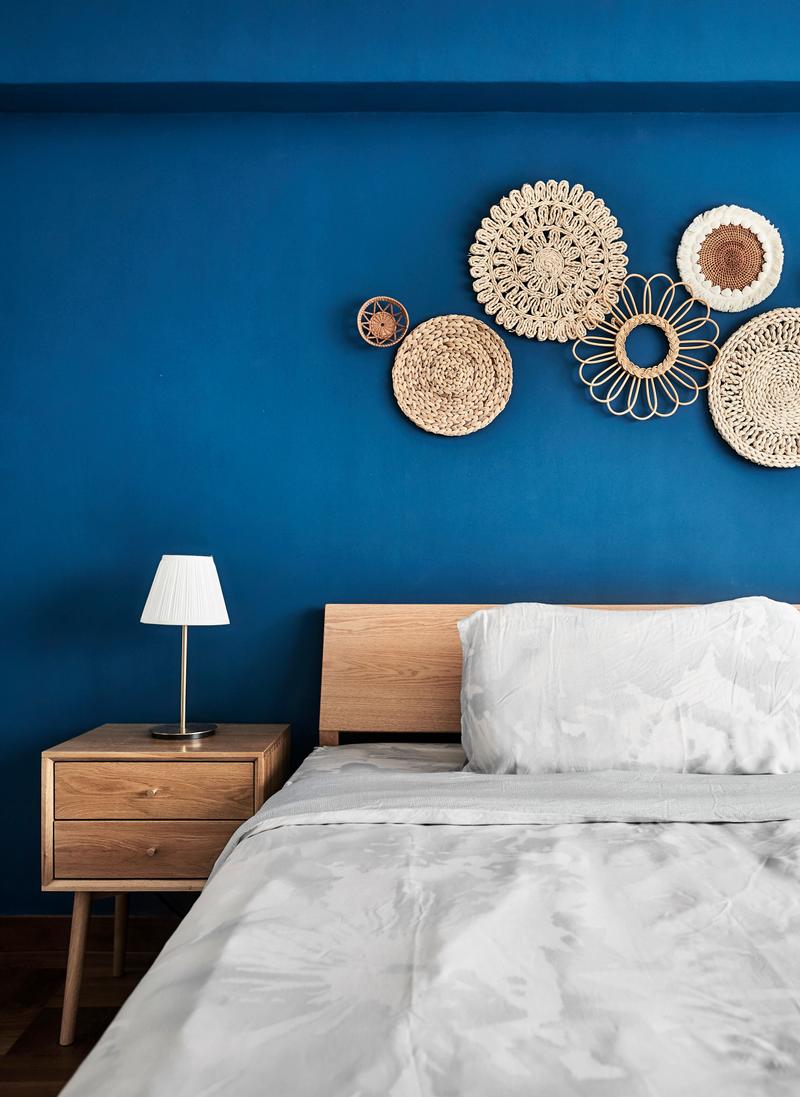 D: Instead of using the original master bedroom as our sleeping space, we chose to create a new one by merging two of the junior bedrooms together. If we were to use the existing space, it would be too cramped, especially if we had a king-sized bed and a large wardrobe like we do now.

We made sure to keep the overall colour scheme for our bedroom simple, but not too dark, with whites and blues. The same applies to the surrounding patterns and motifs in our bedroom because the original parquet flooring is already quite busy-looking. 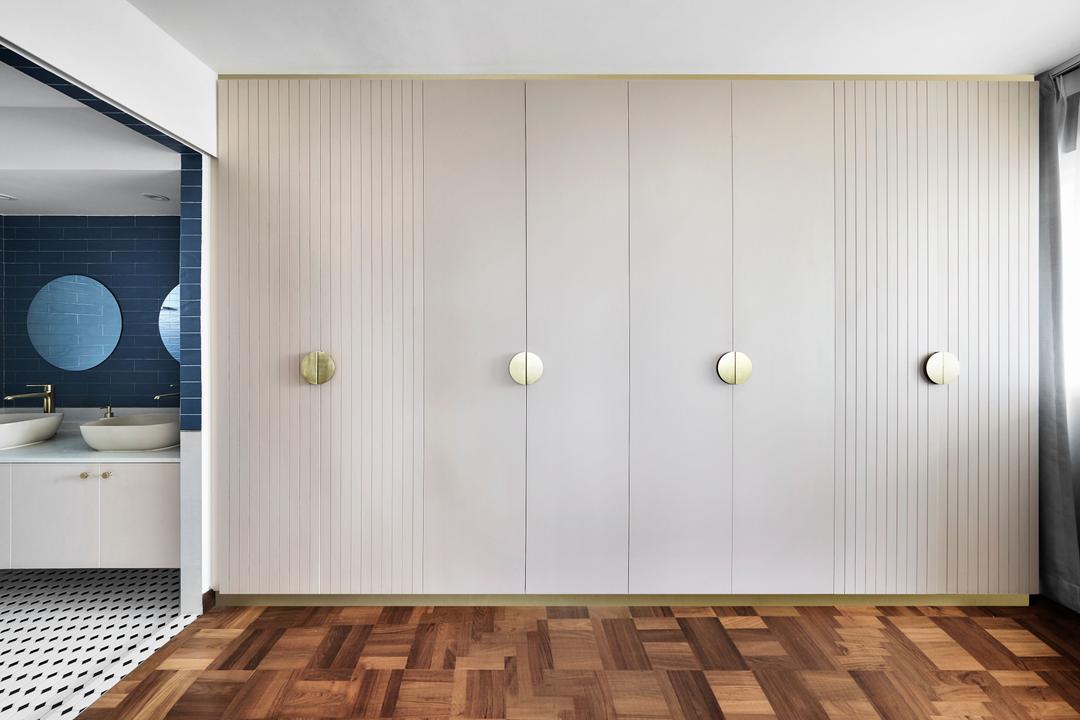 To give it a symmetrical look and to mirror the design of our dining area cabinets downstairs, we chose to have slatted doors for the units on both ends of our wardrobe. We also chose to have metallic handles so that they would match the tapware, knobs, and other accessories in the en suite next door.

On making over the master en suite 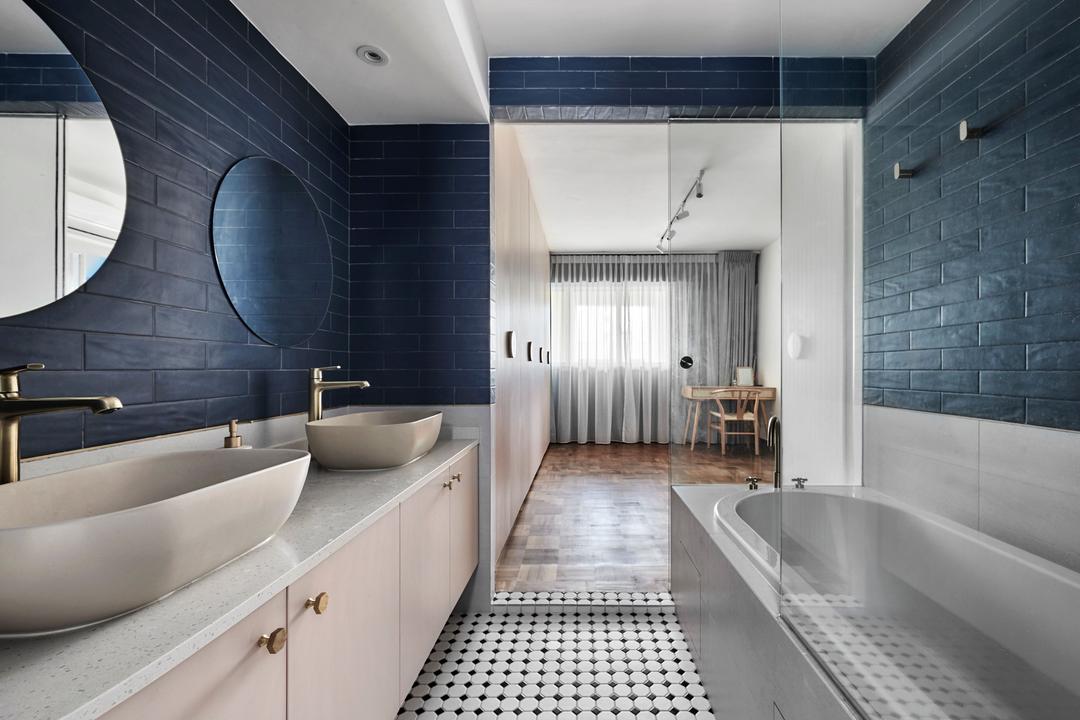 D: We have a glass door for our en suite, because like downstairs, we wanted it to look seamless with the rest of the bedroom. However, due to the wet area, we chose to keep the drop between the floors of our dressing area and the en suite.

Having the his-and-hers vanity is in line with the concept of our home being a relaxing space with good vibes because we don’t want to fight over the sink the first thing when we wake up in the morning (laughs). 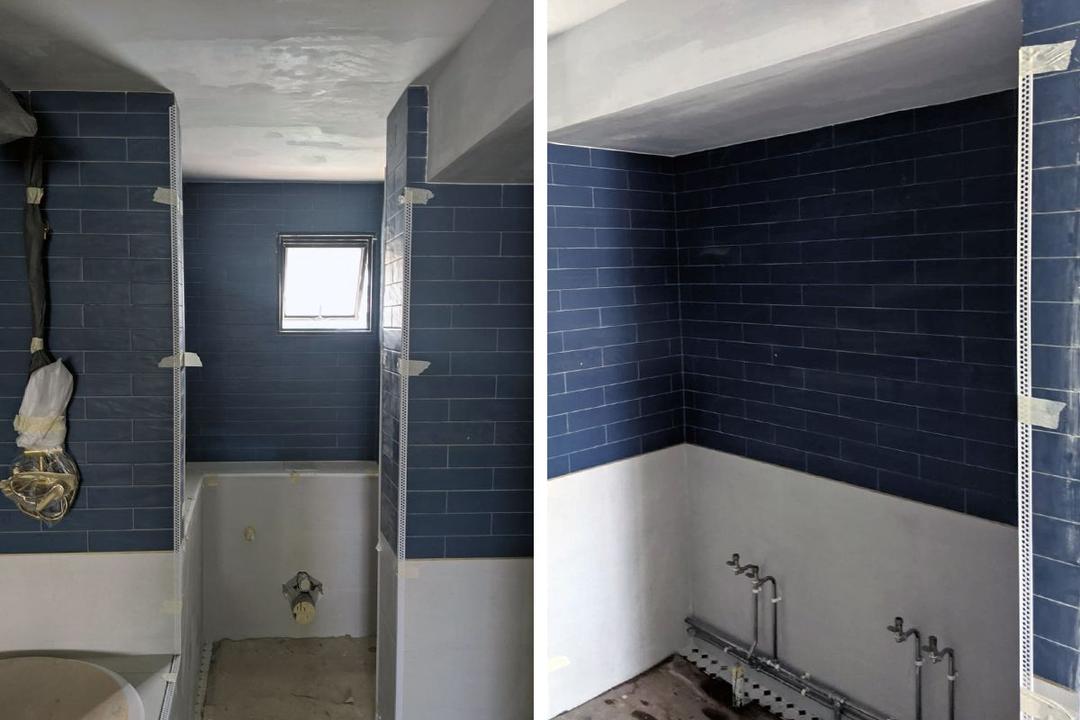 As for the bathtub, we don’t use it that often, but we wanted one because it’s enjoyable to have a good soak every now and then.

There’s also a showerhead installed above the bathtub, and it’s there because we couldn’t have a separate bathing area like in our initial plans due to plumbing restrictions. But anyway, it isn’t a big issue, because we can always shower in the common bathroom if we want to. 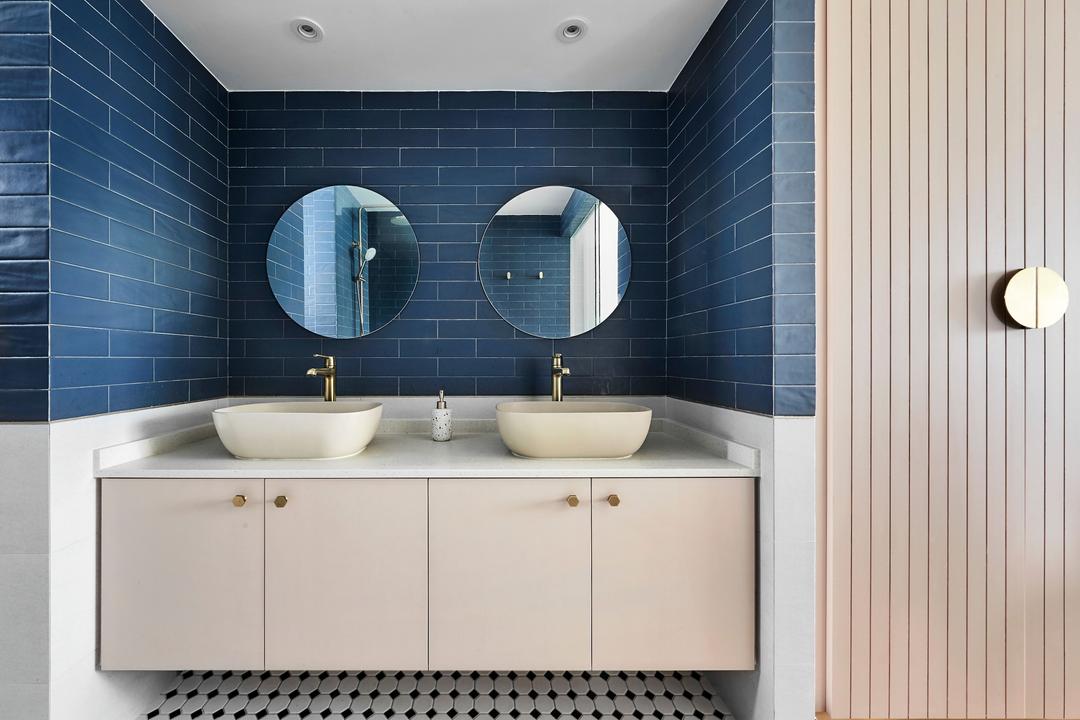 D: What it’s like achieving our first home? I guess, unreal? We were quite nervous at the start, having heard about all the renovation horror stories.

But working with Third Avenue Studio was a comfortable and smooth experience; they were prepared to tweak their ideas to match our desires. In a way, it was a very creative process, our designers gave us quite a bit of autonomy, but also guided us so that we didn’t end up being lost. 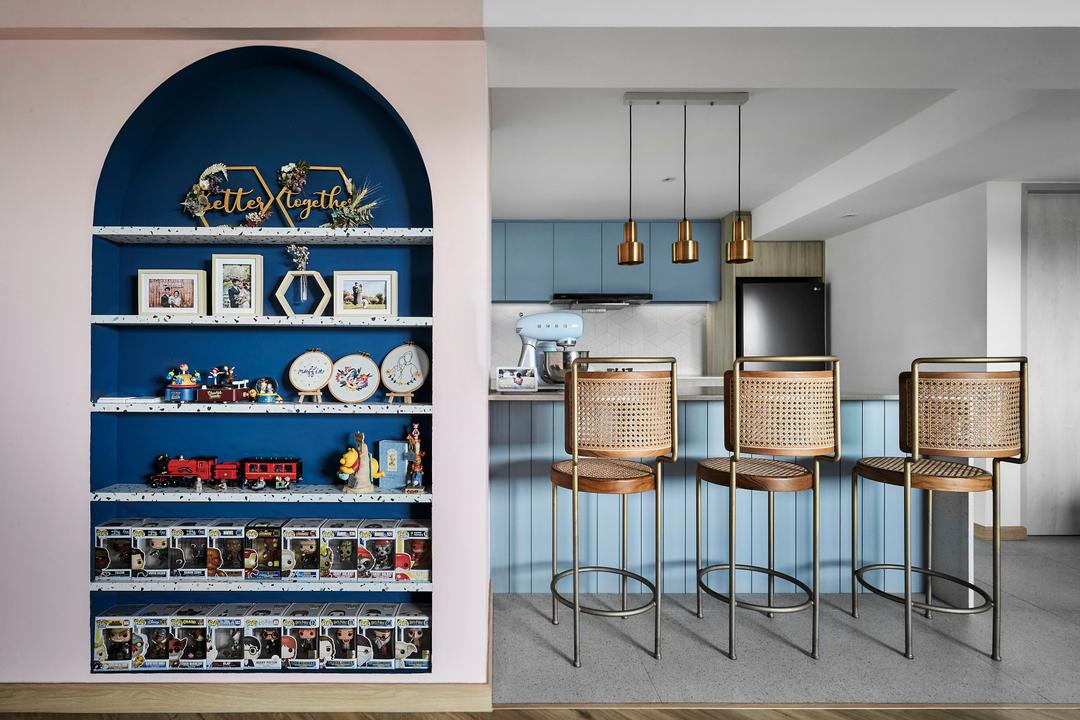 There’s a very nice personal touch to the final result because Acacia and I had a part to play in designing the house, rather than paying someone to do everything for us. So yes, this space truly feels like our home. 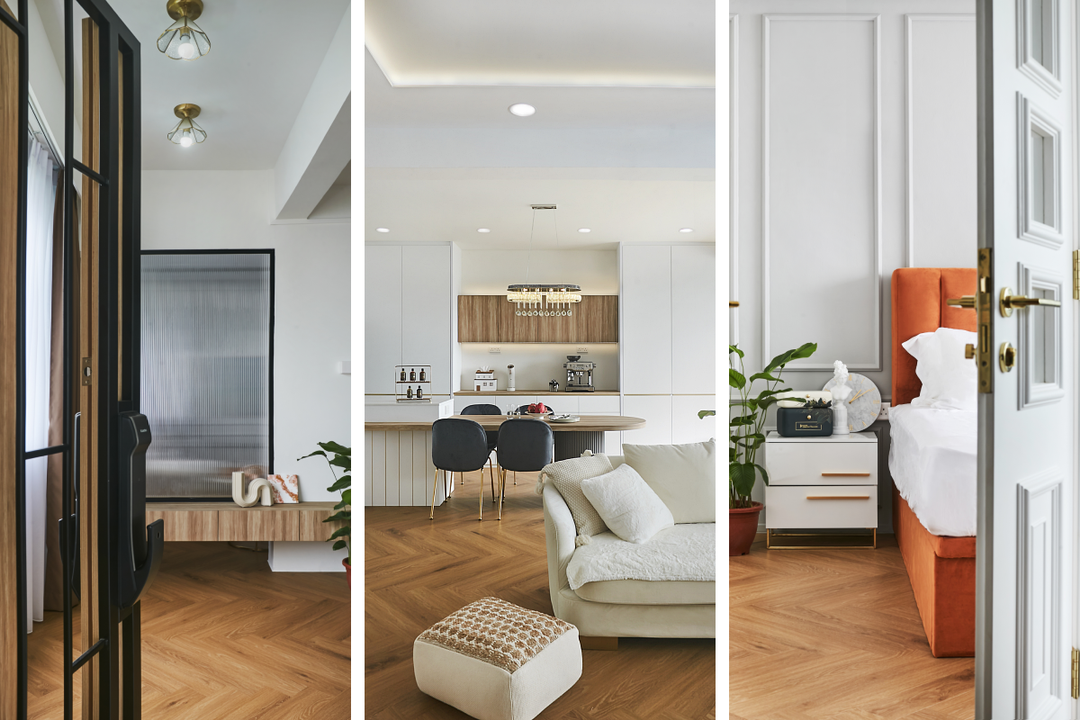 RENOVATION JOURNEY
'80s Bukit Panjang 5-Room Flat Gets Modern Taiwanese-Inspired Makeover
It may be old, but with its fresh open-concept look and little classic details, it looks anything but! 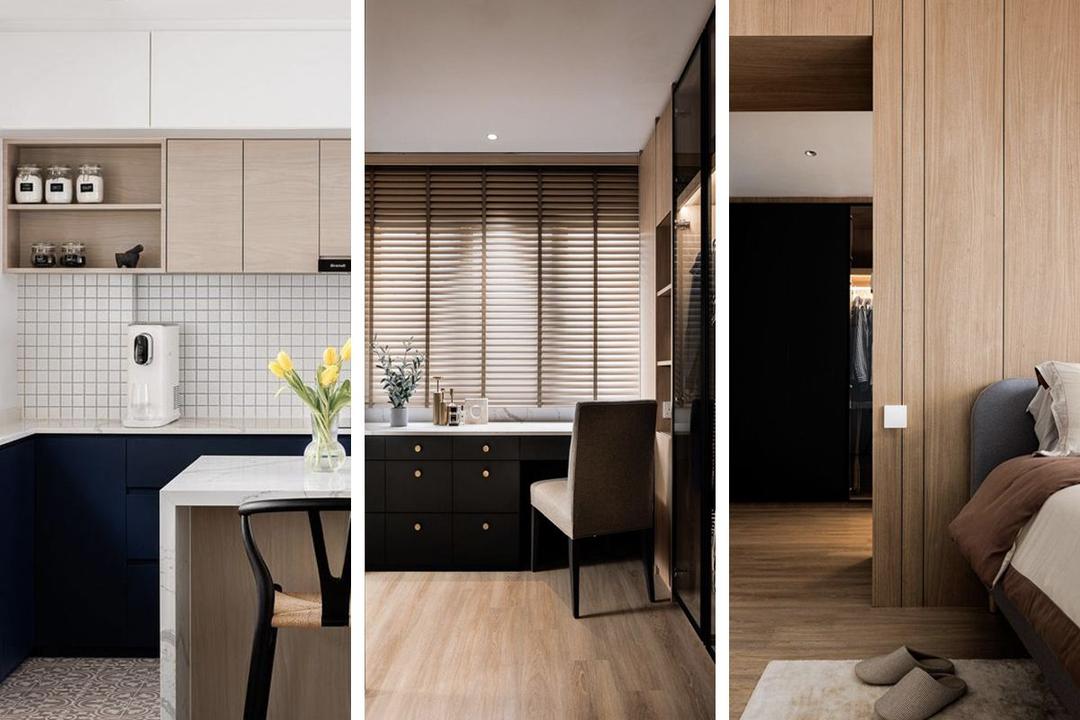 RENOVATION JOURNEY
Bukit Merah 5-Room Flat Goes Casual-Chic with California-Inspired Look
After an extensive renovation helmed by Anhans Interior Design, this 5-room HDB flat in Bukit Merah was transformed into a stylish couple's nest!
Preparing the next article…
Recommended for you 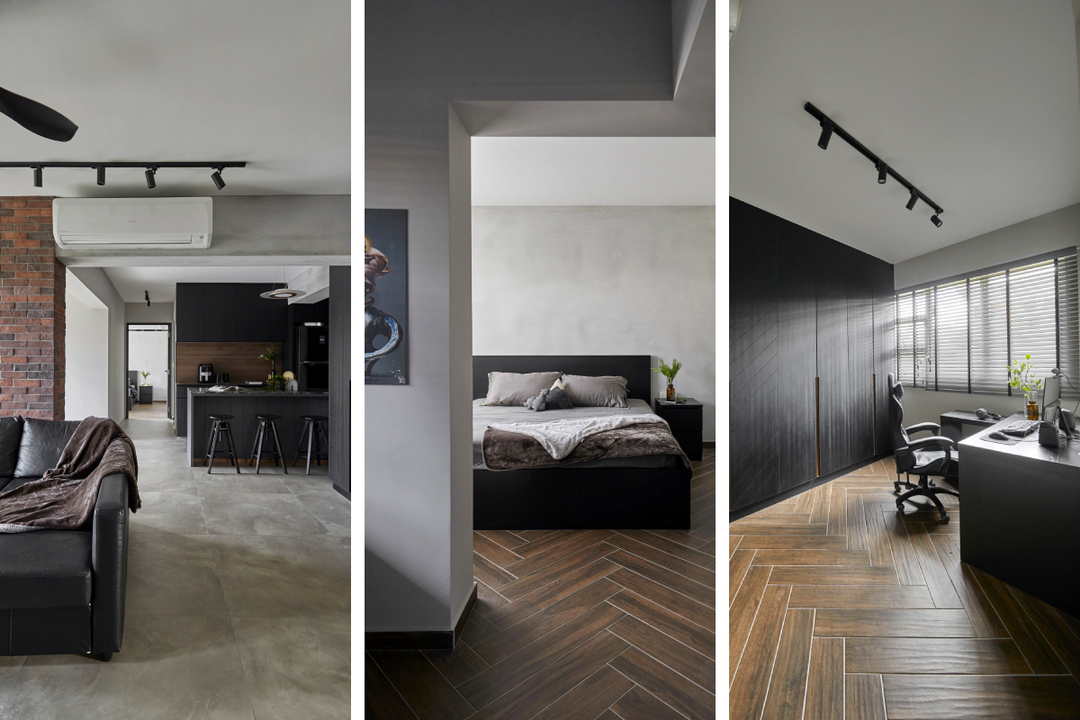