Massive Jumbo Flat in AMK Is So Big, It Took Two IDs To Revamp It

As they say, two heads are better than one, and this project is proof!

Typically, renovation projects are helmed by a single interior designer – but when Fifth Avenue Interior’s Kenny was asked to renovate this 157 sqm jumbo flat in Ang Mo Kio, he knew he needed additional help.

“It’s a pretty big project in terms of size and scale, so I thought that an extra set of hands would be useful,” says Kenny. “To ensure that the project runs smoothly, I reached out to my colleague Valerie to get her help with the design and logistics.” 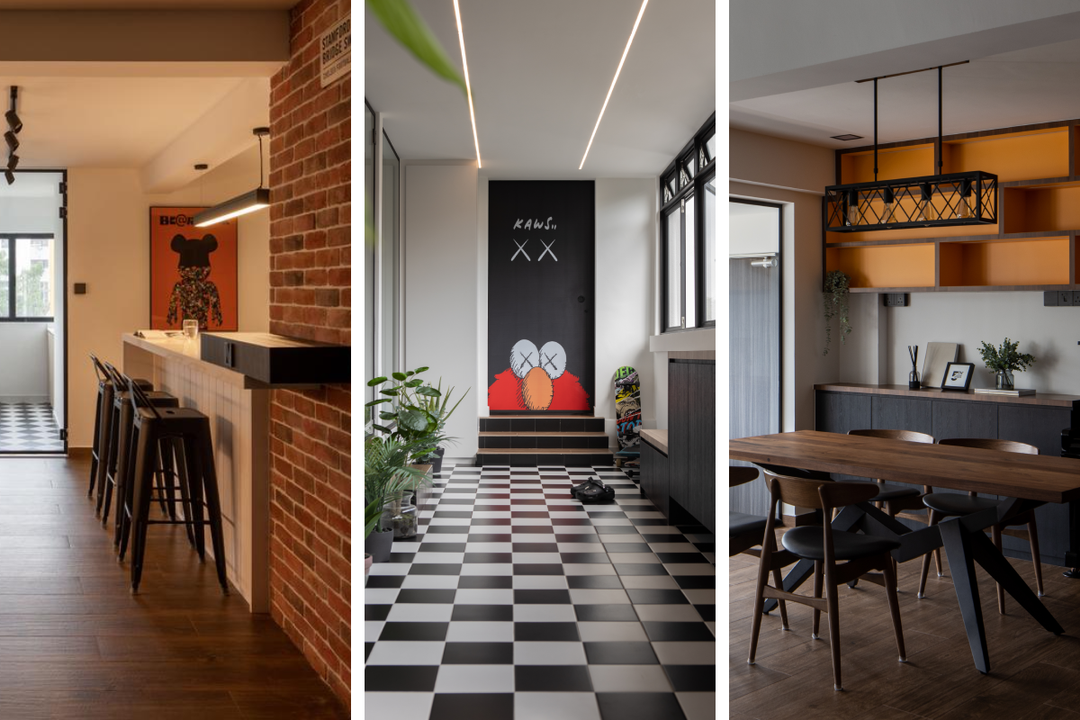 To say that the project was challenging is perhaps an understatement, as Kenny and Valerie not only had to navigate around the house’s structural quirks, but also find a way to keep the look cohesive.

But judging from the fresh new look, it’s clear that their efforts were worth it. To find out more about the renovation process, we sat down to have a chat with both Kenny and Valerie! 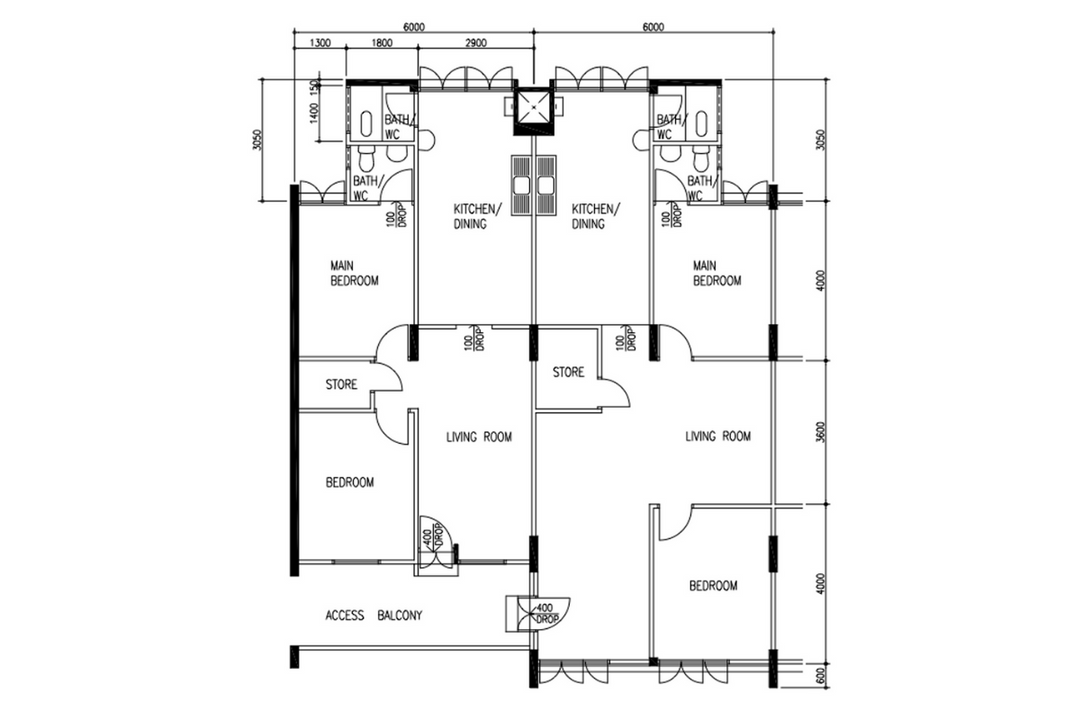 Kenny (K): This jumbo unit is a combination of a 3-room and 4-room flat. Before this renovation, the previous owner was staying in the 4-room unit while he rented out the 3-room side – so the whole area was kept separate until the current owner took over.

Structure-wise, it was quite challenging as there were a few beams and awkward spaces, so when we were discussing what to do, we decided to mentally strip away all the structural points and imagine the space as a blank canvas. 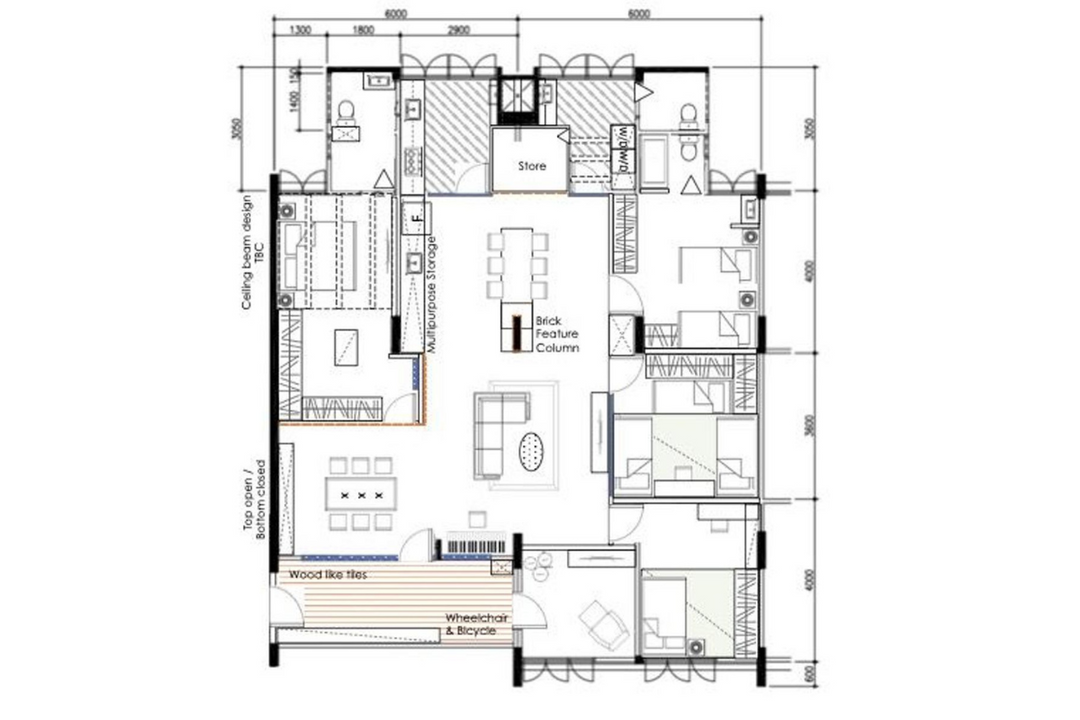 Once we figured out what we were going to do, we adjusted the final layout with the structural beams and walls in mind. But I really have to give the credit to Valerie as she was the one who came up with the final layout of the place.

Size aside, we also had to find ways to accommodate different needs and preferences. This house belongs to a total of five people – the homeowner, his three kids, and their helper, and while the homeowner is the one with the main say, the kids naturally have their own opinions as well. 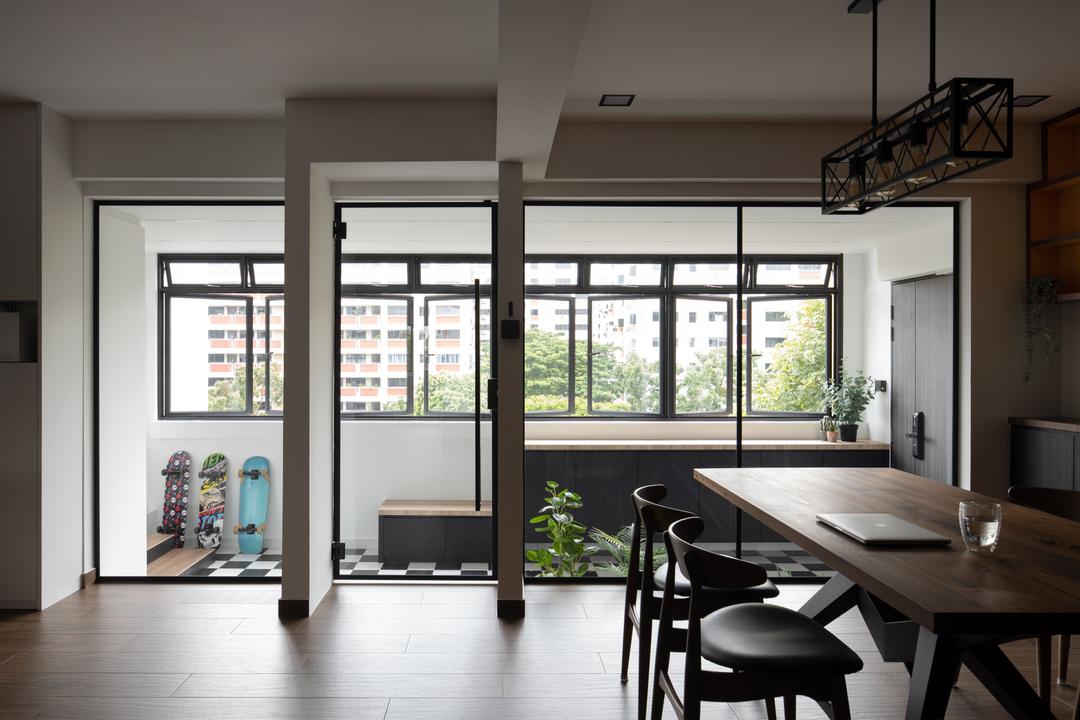 Valerie (V): The entryway was a recess area that the previous owner bought – before that, it was just a common corridor that had never been worked on before.

Since it’s the first thing you see after entering, it’s also where you get the first impression of the house. That’s why we wanted to give it a striking new look with these black-and-white floor tiles that demarcate the space. 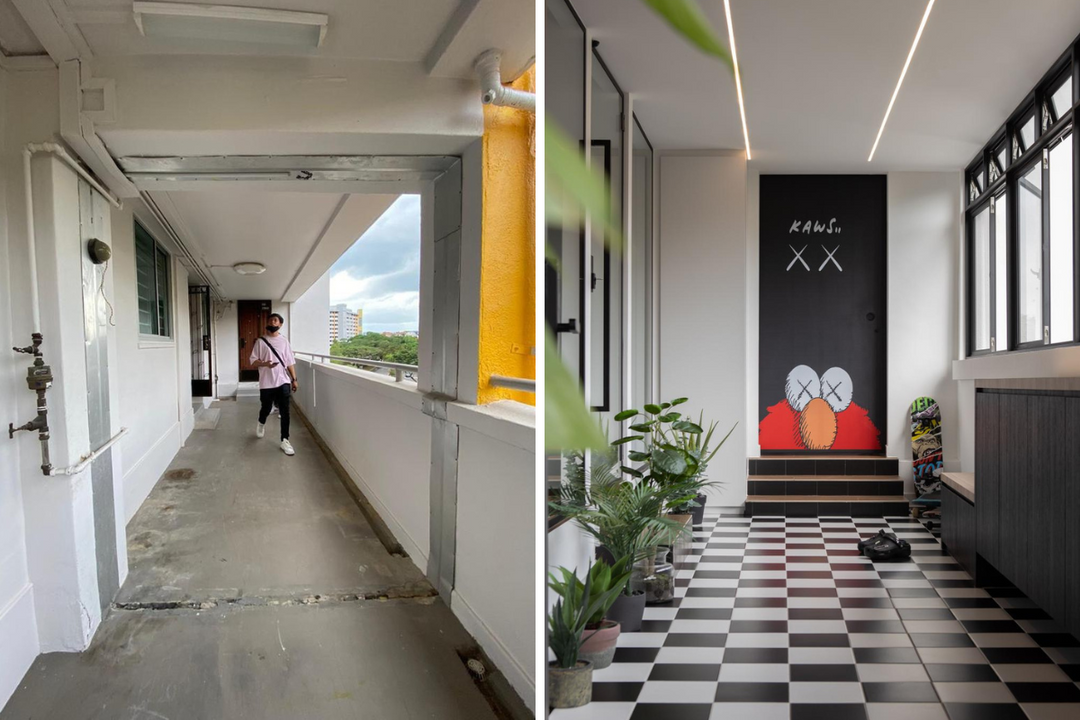 The entryway, before and after the renovation

K: Some people think that the black door at the end of the entryway is a custom-made door. It’s actually just a standard sliding glass door; the Elmo and KAWS decals were all sourced by the homeowner, who pasted it on the door himself.

About the living, kitchen, and dining area 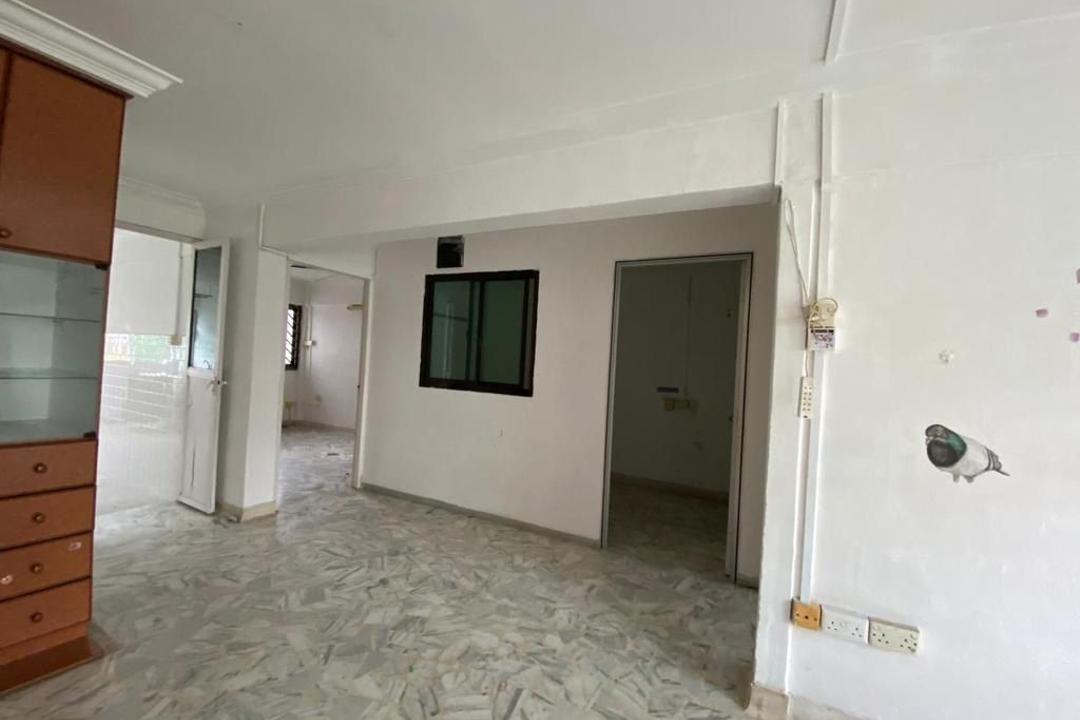 And between the two original living rooms, the one we decided to use has a more central position in the house, which made more sense as a living room should be the centralised area of the house. 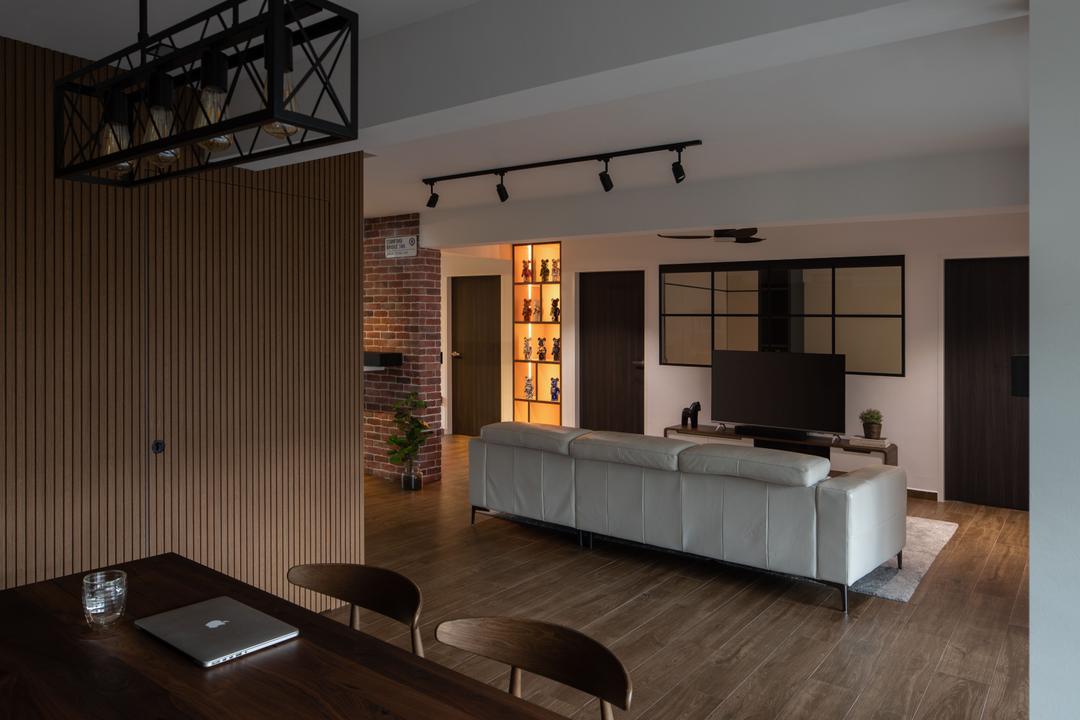 As there was some space behind the living room, we decided to turn it into a bedroom, which currently belongs to the homeowner’s two sons.

We did a half wall with a glass window to let in some light, since that area didn’t have its own dedicated window – but of course, we did install blinds for them to use whenever they need privacy. 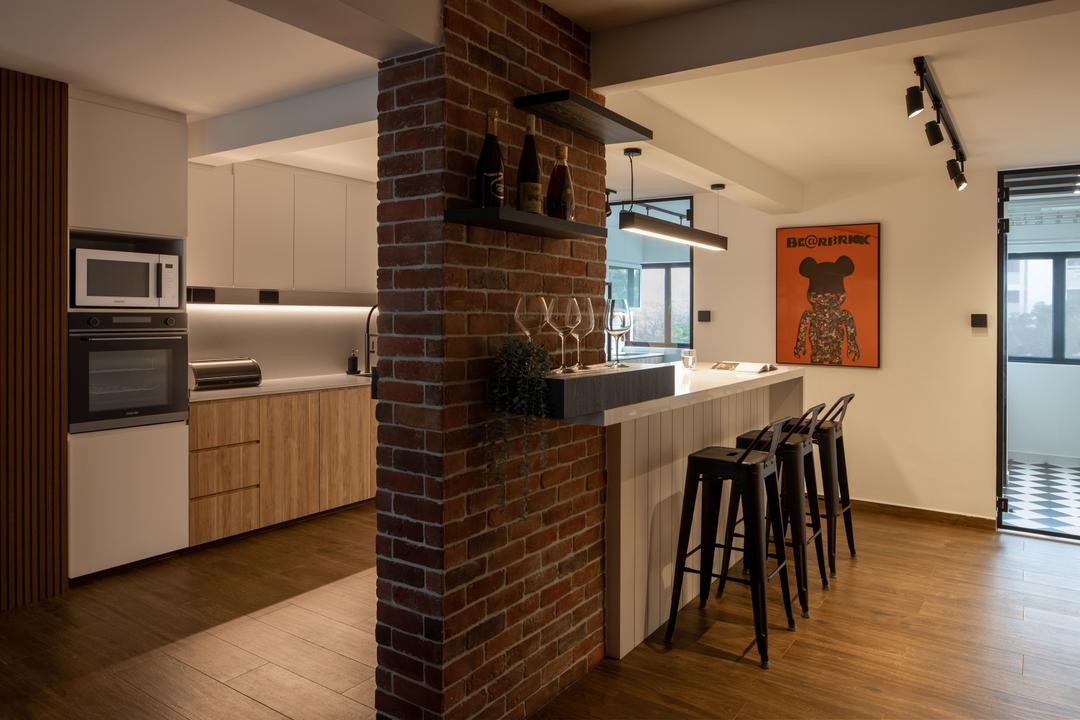 K: The other living room was turned into the dining room instead. There’s this particular column that we couldn’t hack away, but instead of leaving it there awkwardly, we decided to turn it into a feature wall and wrapped the kitchen island around it to incorporate it into the design. 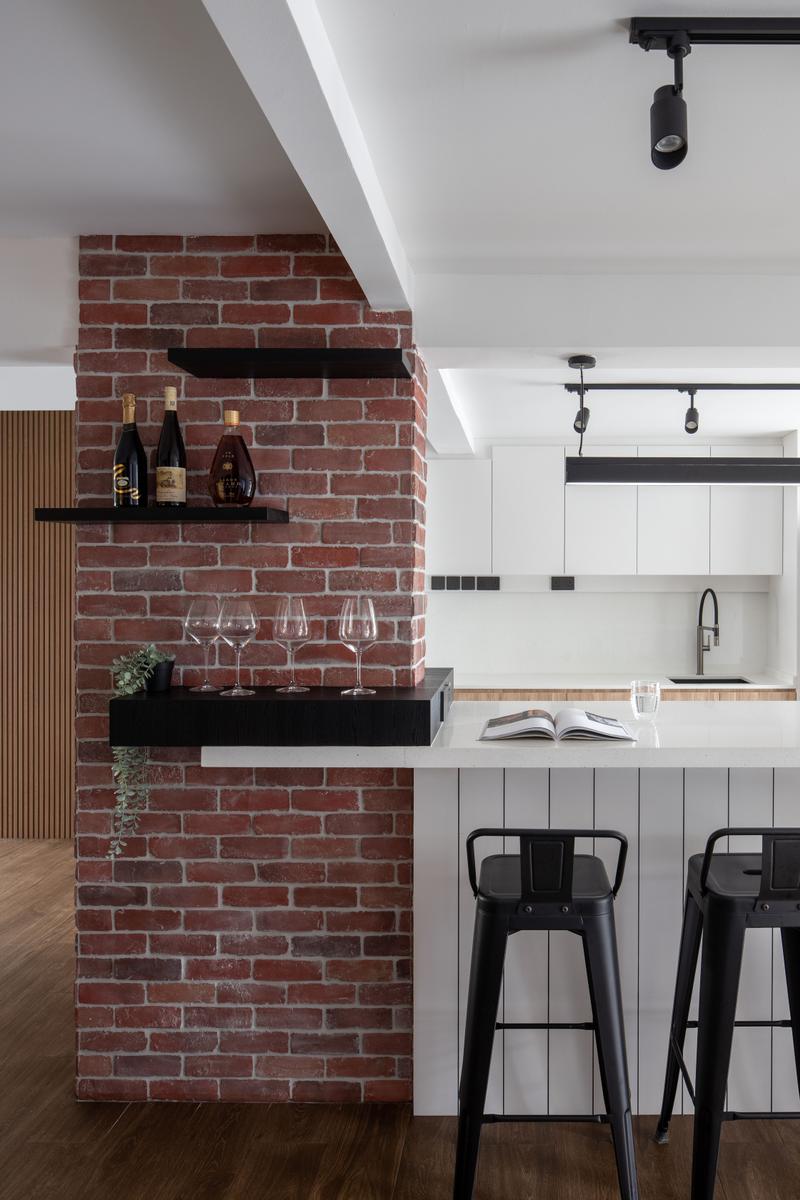 The island itself was made entirely with Snow White quartz – nothing too extravagant, as we already have so many striking elements in the communal space. We figured we needed to tone down the look here so that the other parts of the house can stand out more. 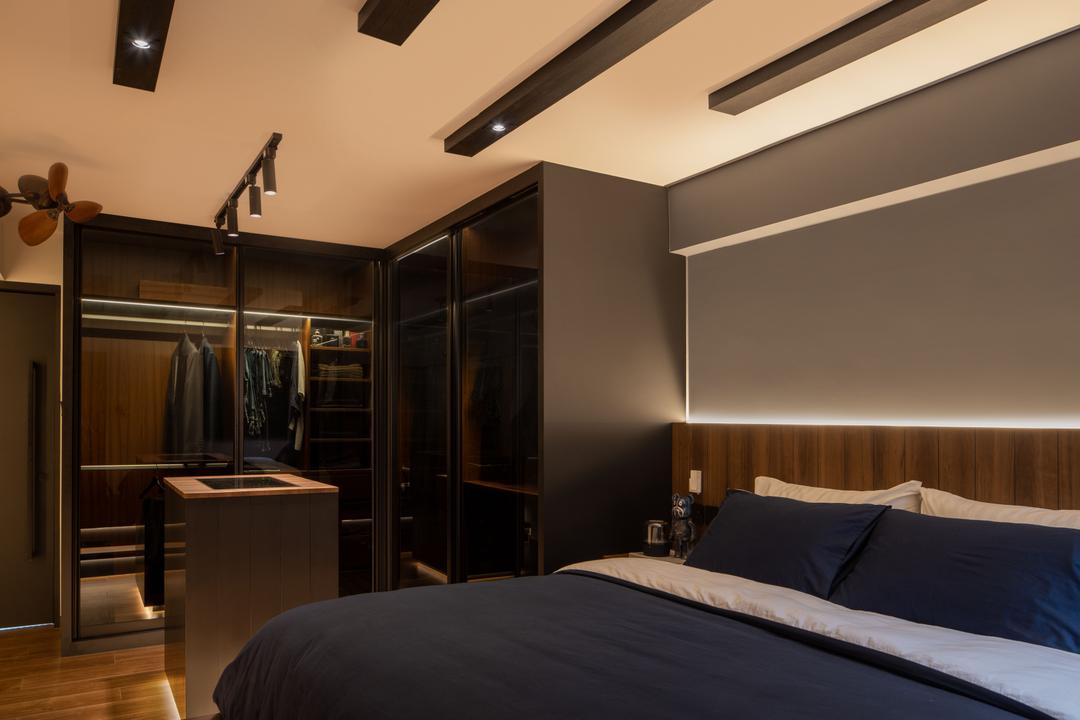 K: One feature that the homeowner really likes is a sliding glass wardrobe in the master bedroom. I think the way the wardrobe lights up whenever you open it really caught his eye, so he told us he wanted one in his bedroom as well. 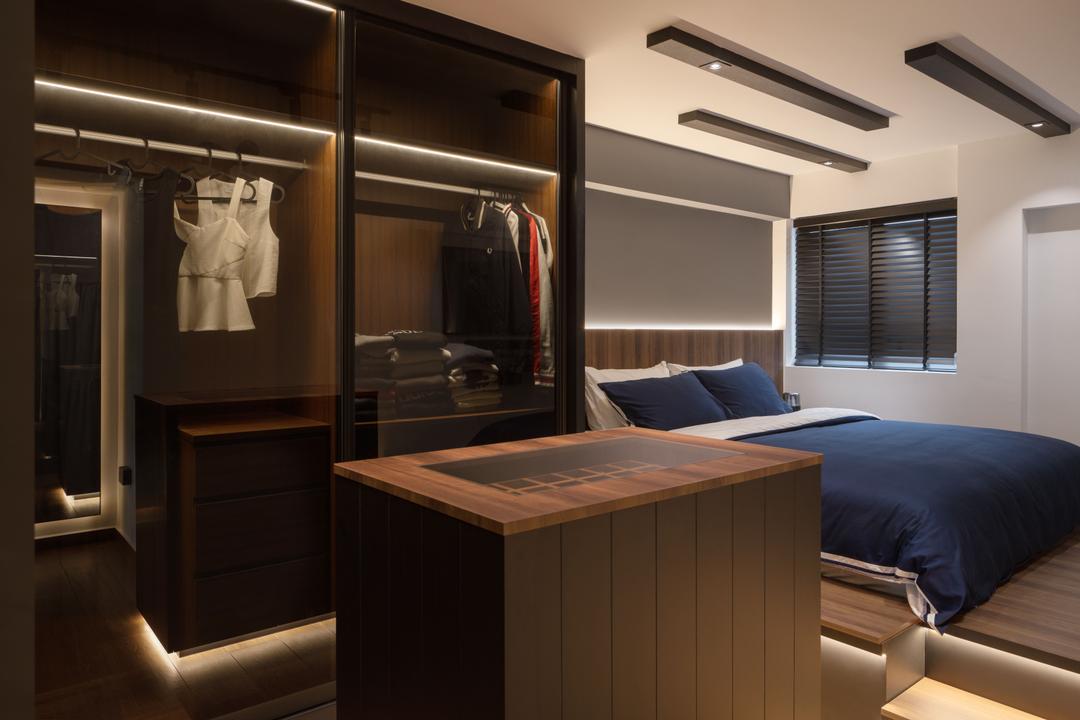 V: I think what stands out about his wardrobe is the reflective bronze panels we used. Normally, most wardrobes are made with black or bronze-tinted panels, but this one is made with an especially reflective one that not only minimises clutter, but also helps to open up the space even more.

Oh, also, as he has a lot of clothes and accessories, we also decided to create a small accessory island and a platform bed to give him sufficient space to store all his things.

About the kids’ bedroom 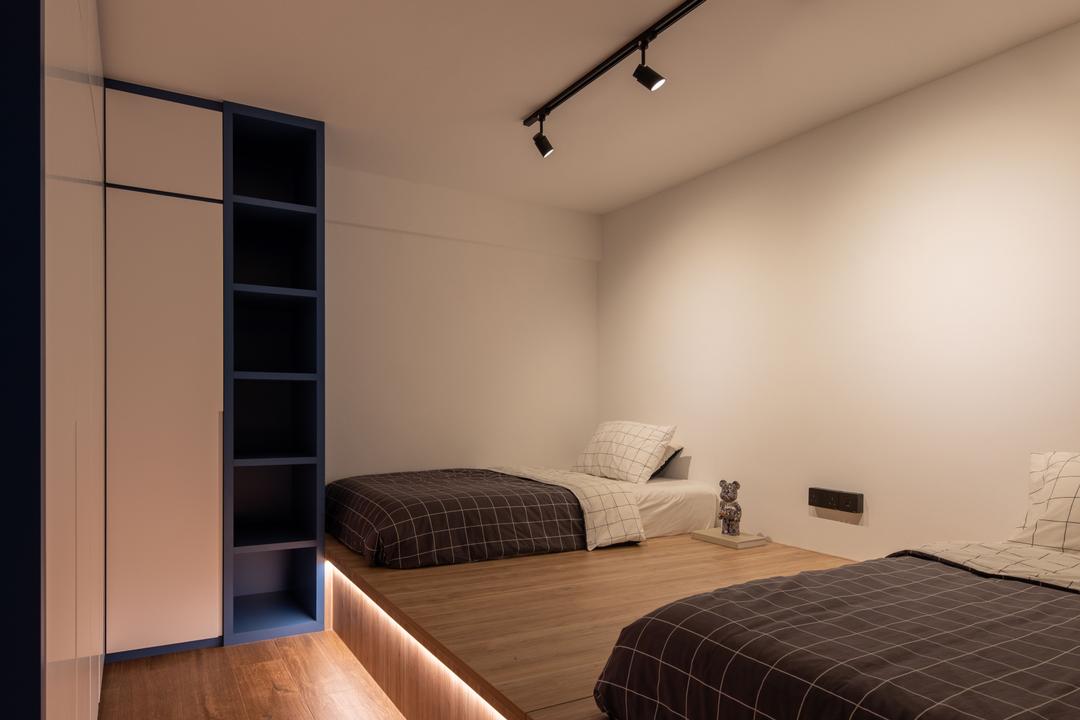 K: The homeowner’s sons occasionally host their friends overnight, so one of the renovation requirements for their room was to have enough space to fit in three beds.

We figured that the best way to do this is to create a full storage platform, where everyone can sleep on the same level. If we stuck to the regular bed frames, it'd be awkward for the guest, since they’d be the only one sleeping on the floor.

Also, the bright blue laminates were chosen intentionally to make it clear that this is the boys’ room, so to speak. 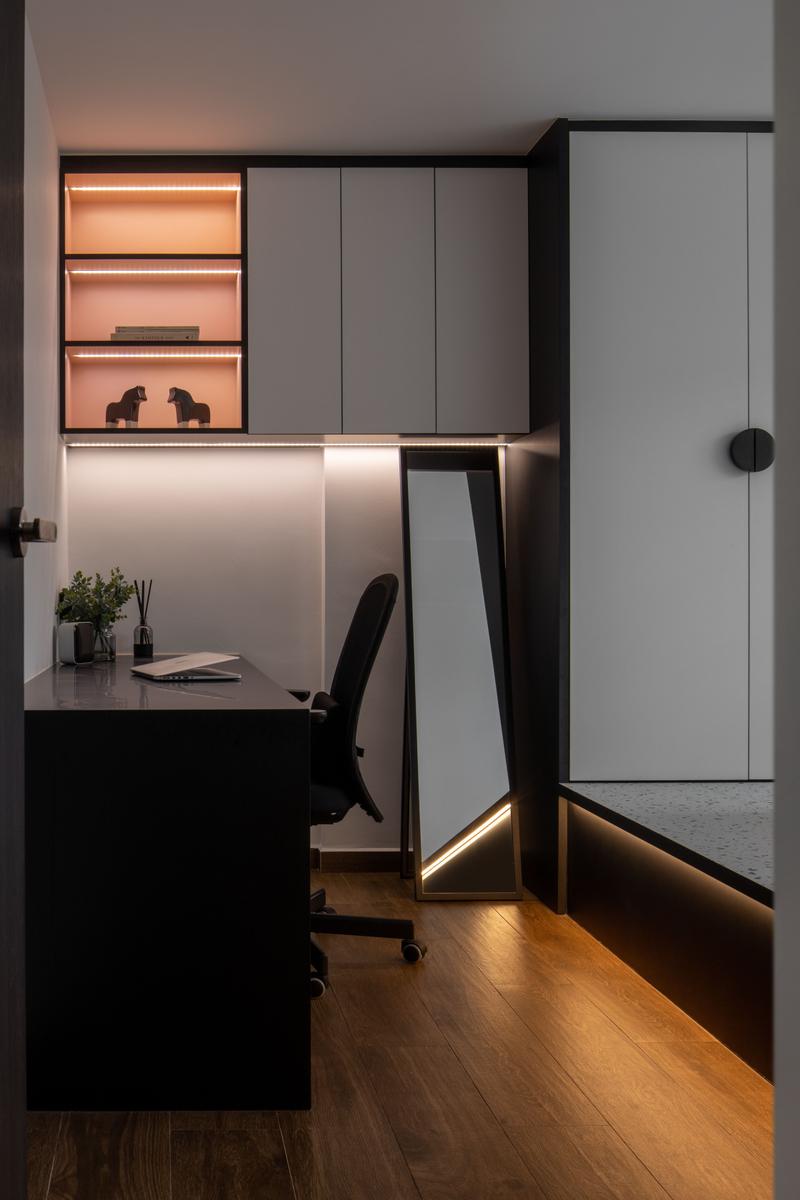 V: For the daughter’s room, the homeowner initially wanted to incorporate a lot of pink elements, but I advised him against it as she’ll likely grow out of it once she’s older.

So, we tried to help her find colours and materials that are more timeless. We mostly stuck to neutral colours like black and white, which are versatile enough to complement any kind of style the daughter may want to try when she’s older. 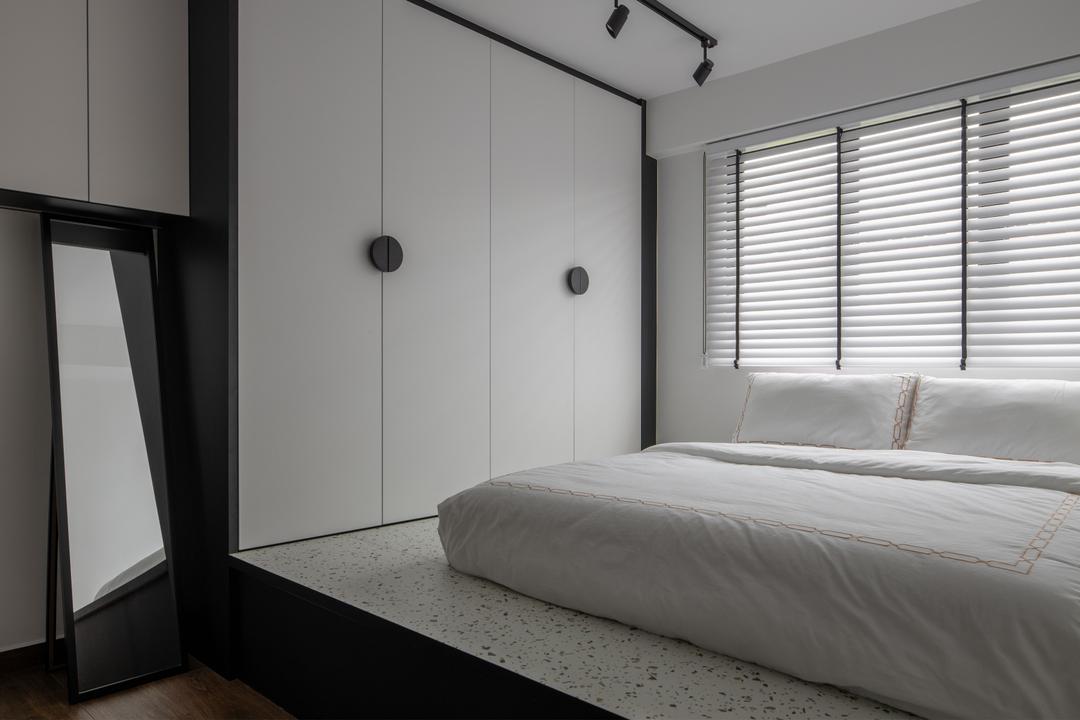 There are still a few pink elements around the place, though – mostly as pops of colour within the terrazzo-laminated flooring. It’s just subtler than what the homeowner originally envisioned. 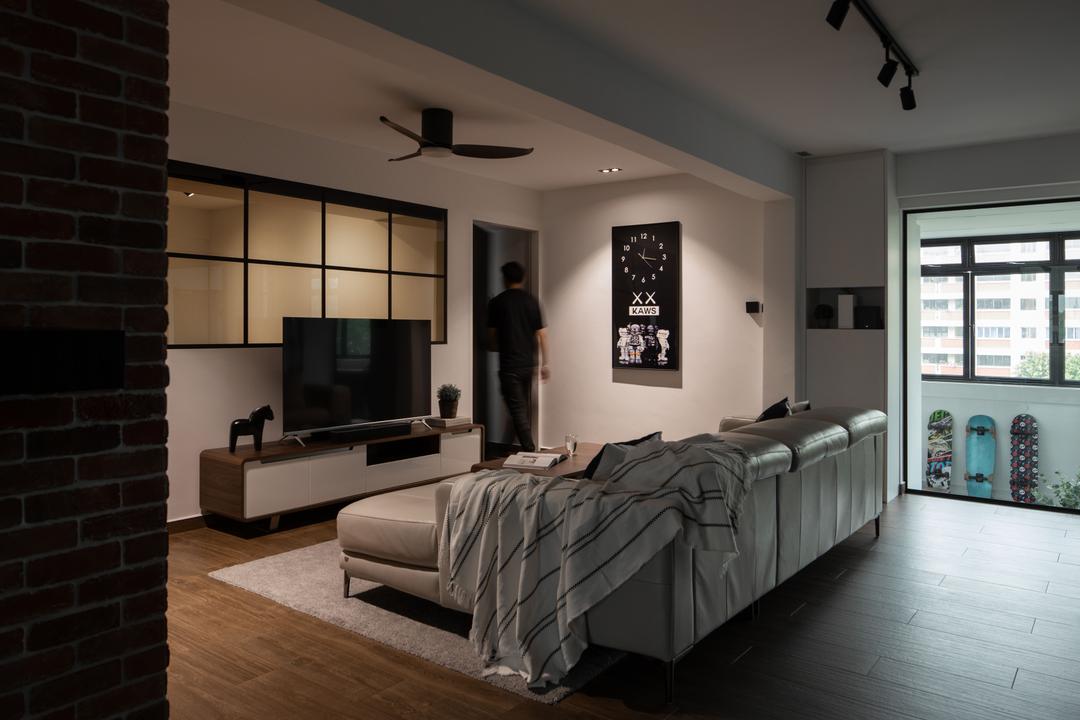 K: The renovation itself was pretty smooth-sailing. I’d say that the difficult part was the preparation, because we had to get a lot of approvals before actually starting work.

For example, we needed to get HDB’s approval to revamp the entryway, since it was still in its original condition before this renovation. Then, when we submitted the hacking permit, we also needed to get the HDB engineers to come down and take a look – and that itself took up quite a lot of time.

With all the work involved, I would say this is one of the biggest projects I’ve taken on. It took all of the experience we’ve learned from our past projects to solve any problems we come across, while still keeping to the timeline. 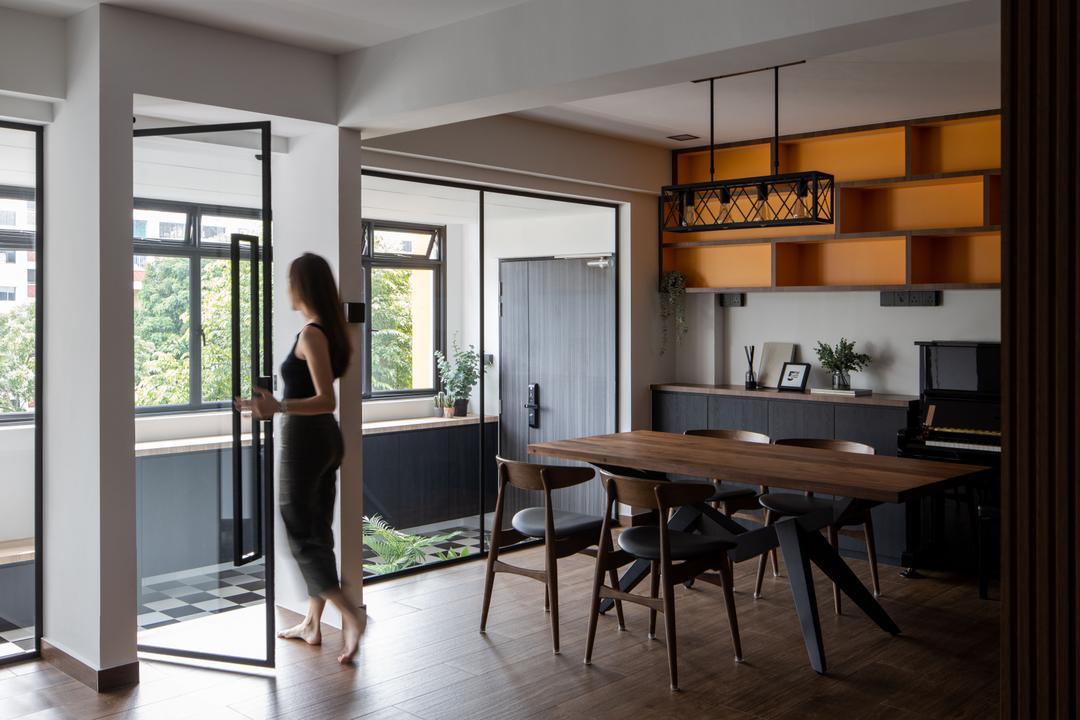 V: To me, what really helped was the chemistry between us, our contractors, and the homeowner. I’m glad that he was very open to ideas – even though he already had a theme in mind, he was still receptive to suggestions.

This openness left a lot of room for creativity, and I think that’s one of the main reasons why the house turned out so well! 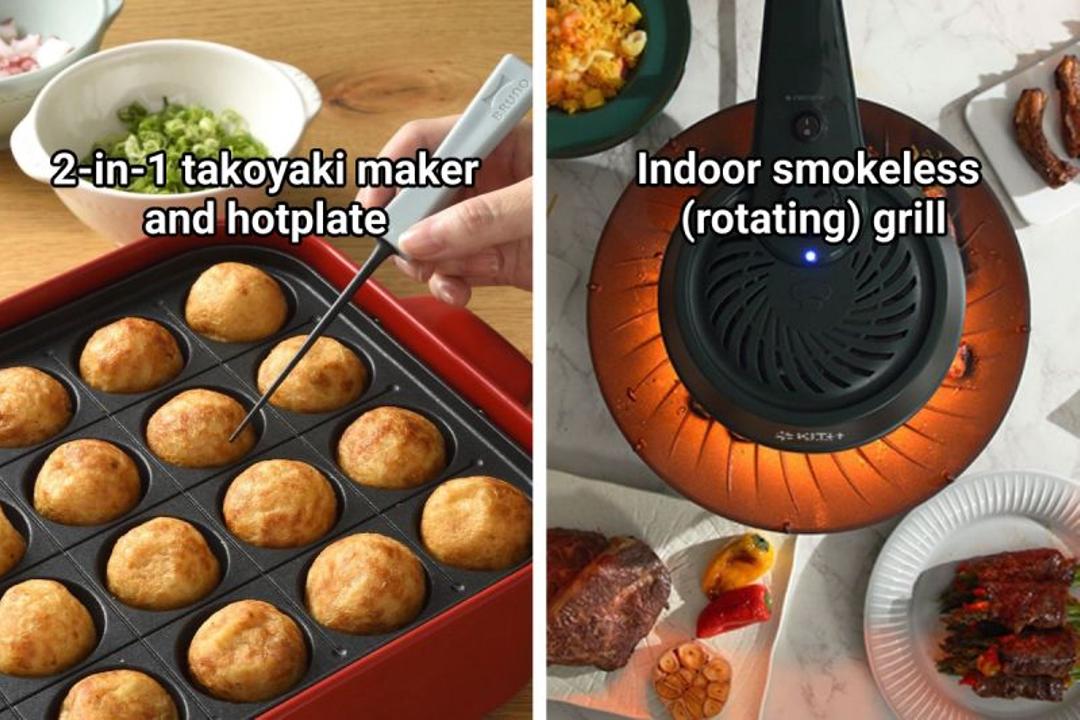 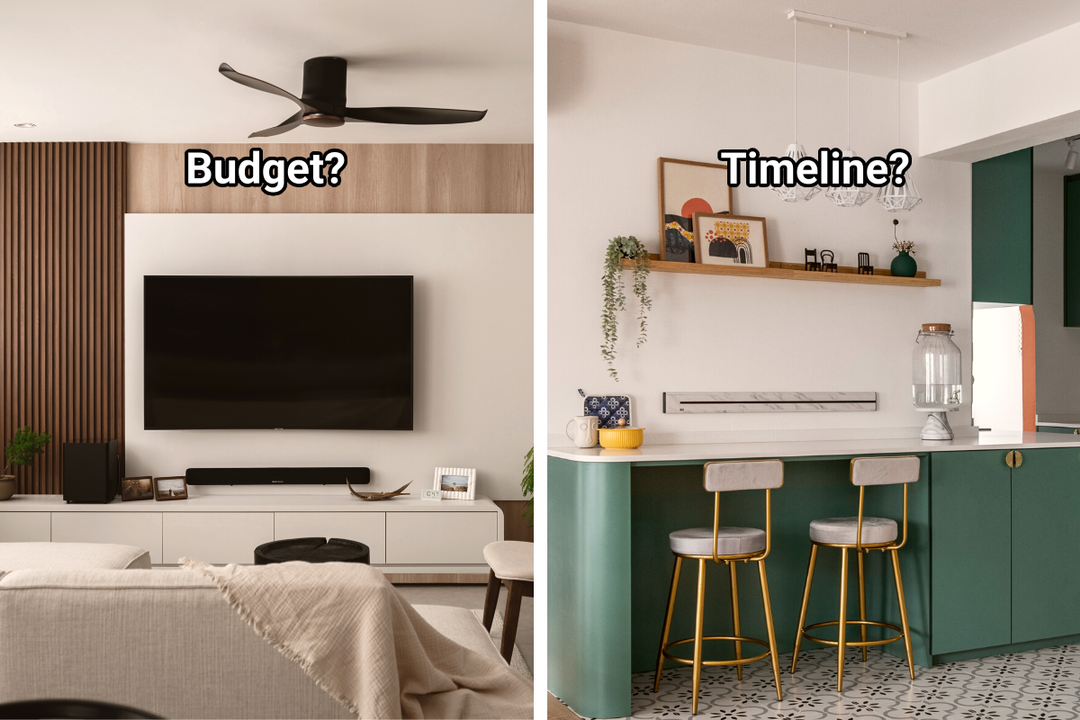 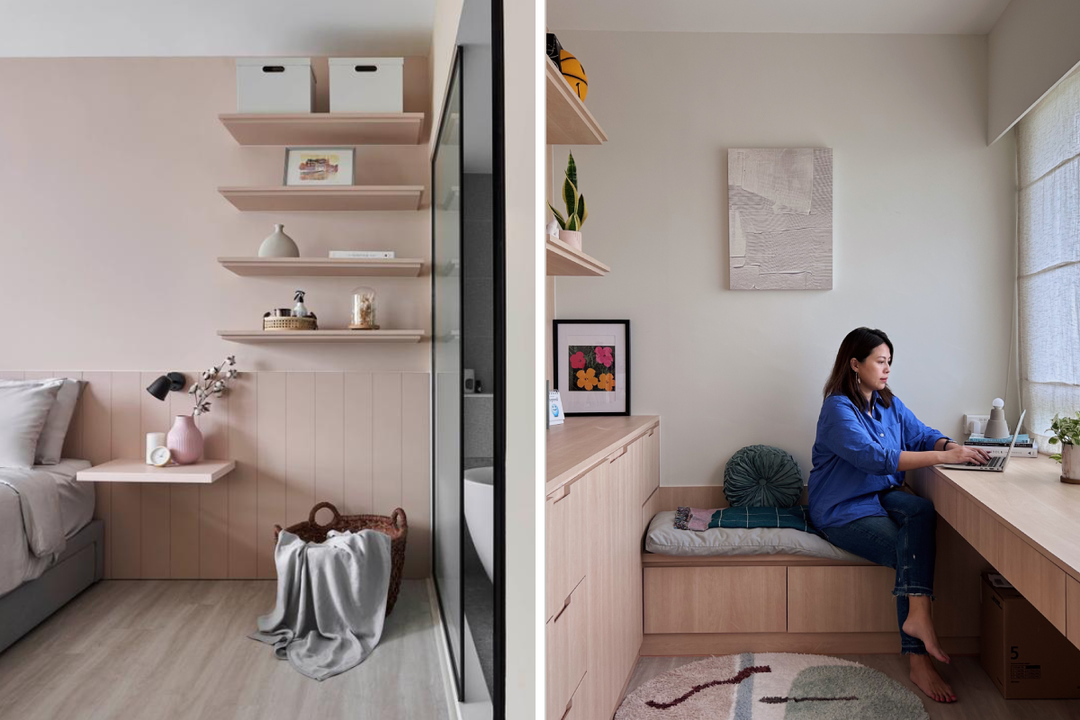 GUIDE
3 Homeowners' Budgeting Journeys for Their House and Renovation