Minimalism (and warmth) captured in a 90 sqm space.

Even before beginning their renovations, some homeowners may already know what they want their future abodes to look like. Others, like Sin Yee, did not.

“I like having an organic design process, where I don’t know what I’m going to get until I get it,” explains Sin Yee. “Plus, I didn’t know anything about interior design at the start, so I really didn’t have any preconceived ideas of what I wanted my house to look like.” 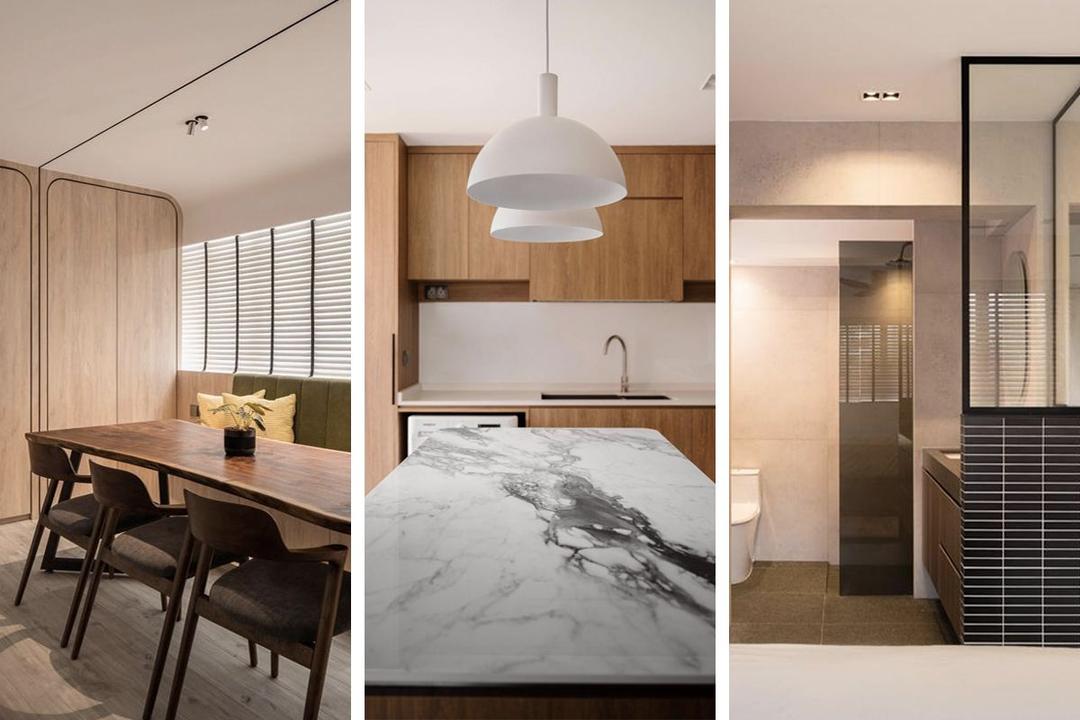 Impressed by the work that Kobe of KDOT did for her brother’s home, she too decided to work with the same interior designer. And after much discussion, she decided to give him full reign over the renovation of her 3-room HDB flat in Potong Pasir, resulting in this cosy bachelorette pad characterised by minimalism, warmth – and some surprising features.

To dig deeper into this unique home, we got Sin Yee to tell us more!

Sin Yee (SY): After living with my parents for my whole life, this is the first time I’ve gotten a place of my own. As I’ll be living alone, I didn’t need a huge house – I simply wanted it to be a space of my own and a great place for gatherings as I love hosting friends and family. 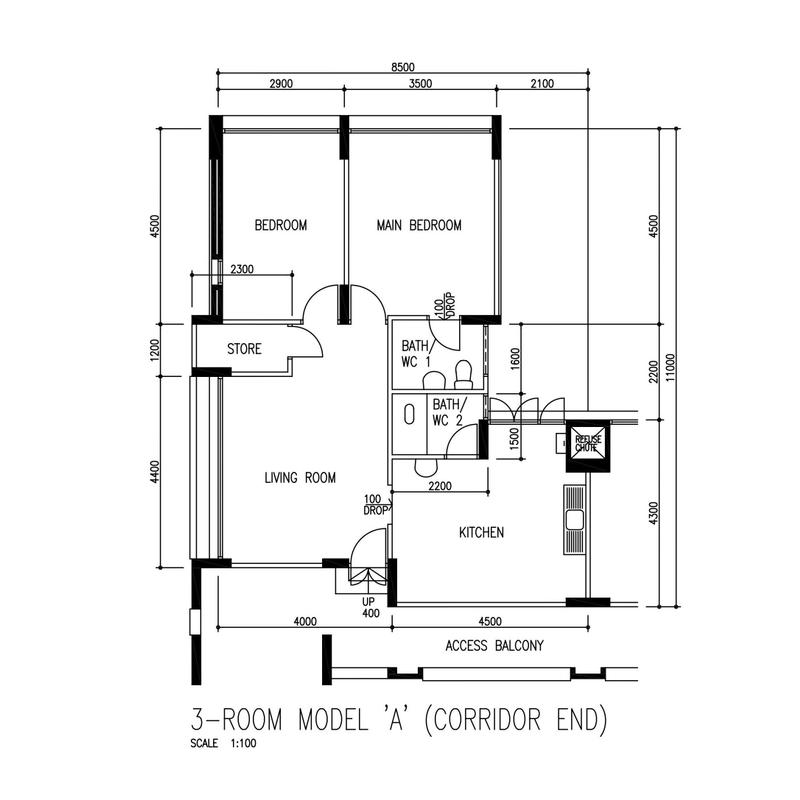 Looks-wise, all I wanted was for the house to be bright, cosy, and welcoming, so naturally, I gravitated towards lighter colours and wood tones. I also like spaces that are clean and minimalistic, such as Japanese homes, so I made sure that the entire look was clutter-free, with lots of built-ins that do away with the need to buy loose furniture. 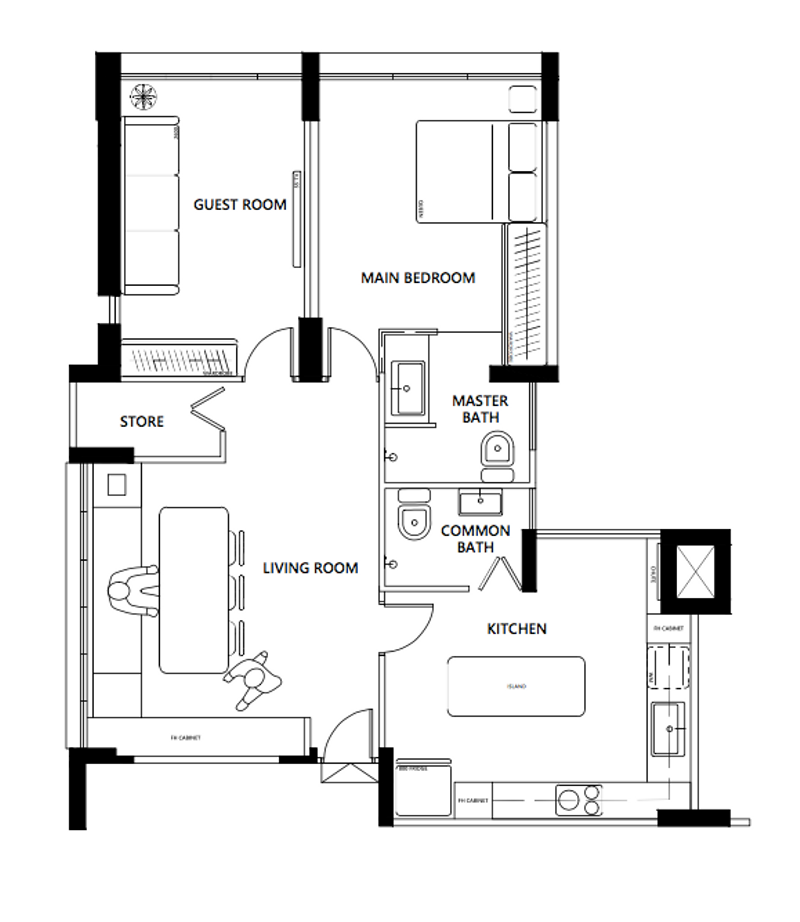 But apart from these big ideas, I didn’t know how to plan my renovation. Kobe, my interior designer from KDOT, provided me with some suggestions on how to plan the space, and sent over several images and websites to look at – that helped a lot. 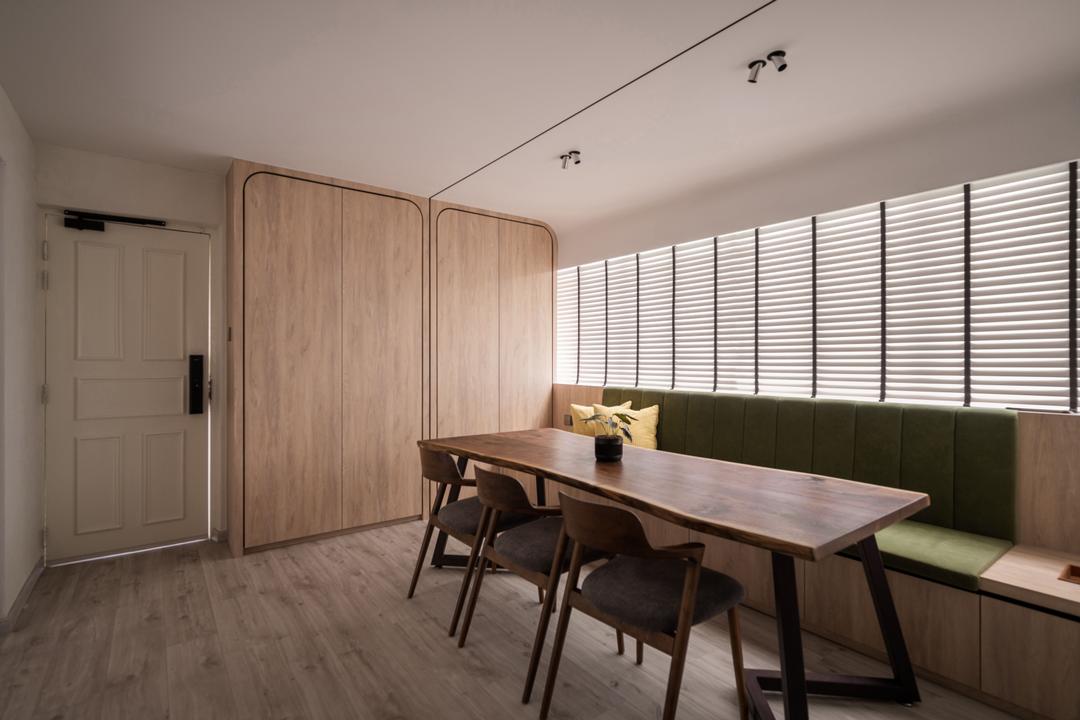 SY: As I love hosting gatherings, I wanted a lively communal space where conversations can flow naturally. When Kobe suggested installing this cafe-style bay window seat, I mulled over it for a little while before agreeing to go ahead with it. It worked out, though, since it can accommodate more people than a regular sofa.

We also agreed not to put the TV in the living room as it would add clutter and ruin the communal vibe. 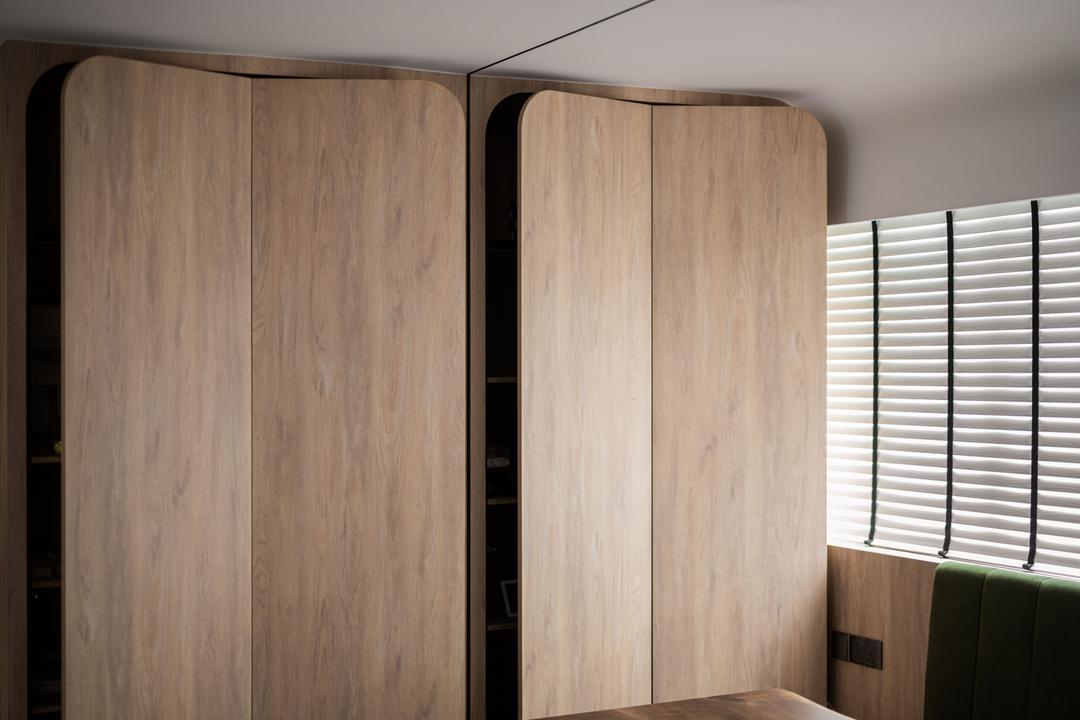 The built-in cabinet by the door was also Kobe’s idea. I didn’t really think about having a built-in cabinet here at first, but I’m glad I went with his suggestion! The rounded doors are a unique feature, and the cabinet itself gives me ample space for my shoes and books without adding clutter. 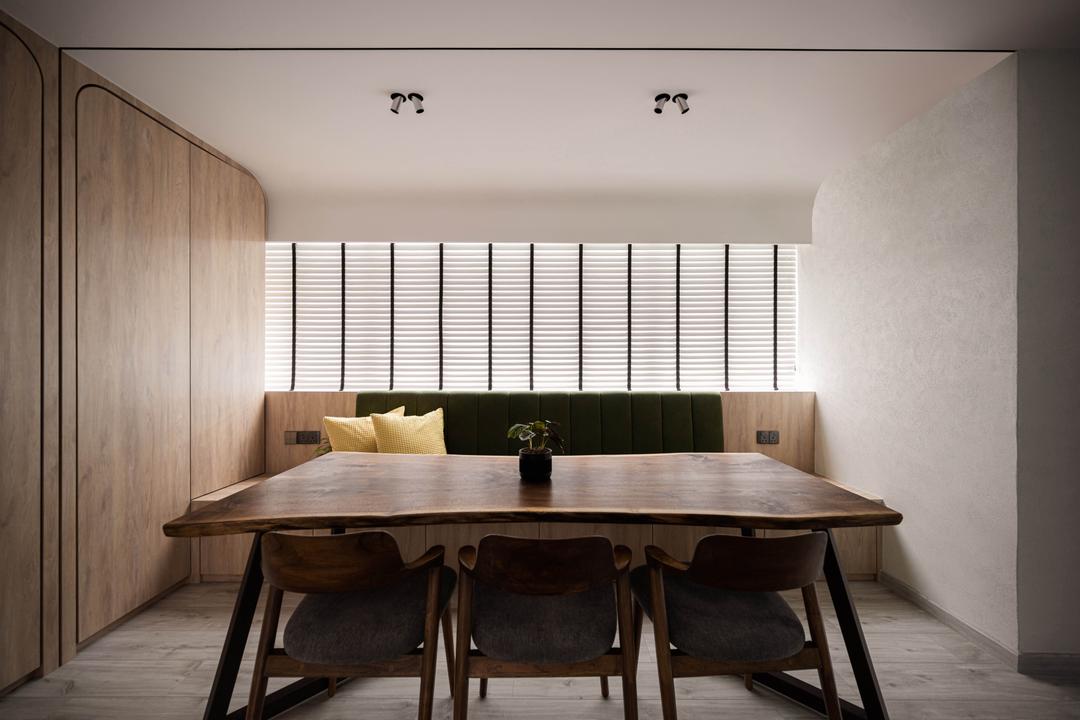 One quirk about this house is that the walls originally had a curved profile – I think it was a construction flaw when it was first built. Plastering it wasn’t enough, as the bulging would still be obvious. So, to ‘straighten’ them out, Kobe created a couple of false walls and applied performance coating to make the rounded edges less prominent.

About the kitchen’s new look 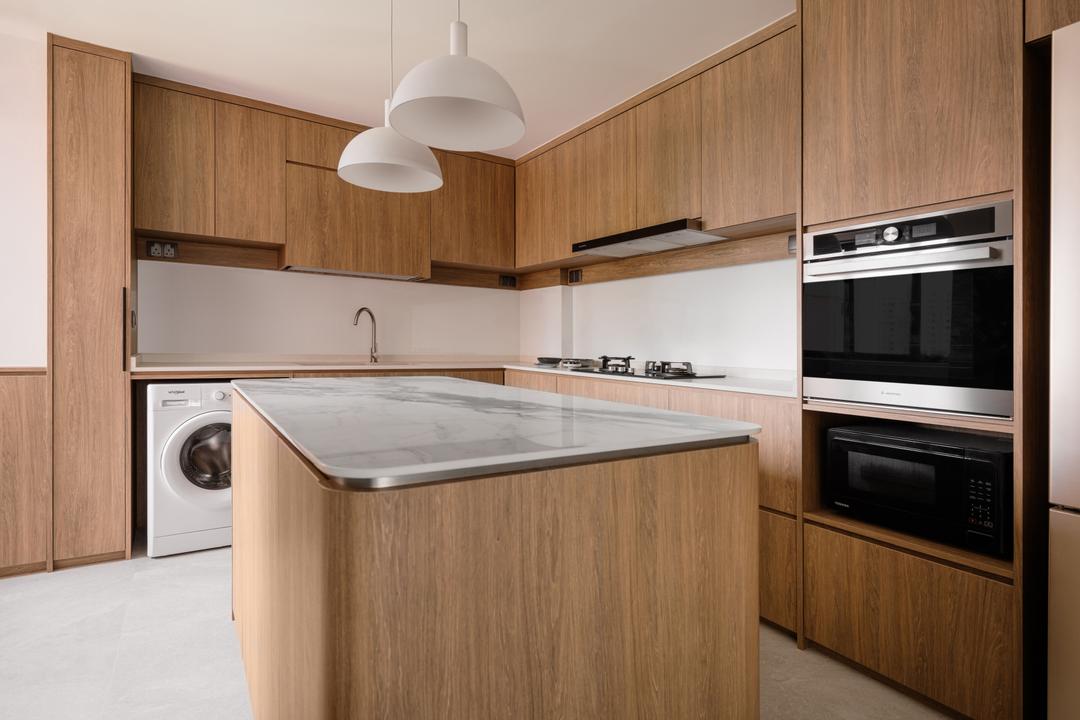 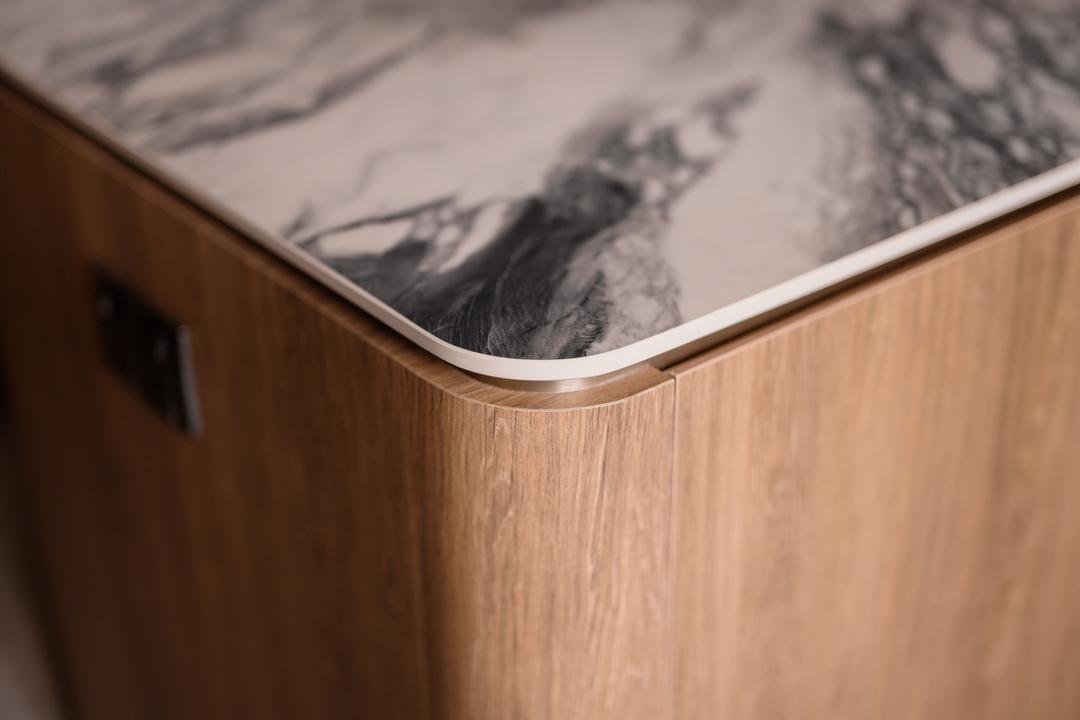 SY: One of the reasons why I chose this flat was the kitchen’s squarish layout, which only some units in this block had.

And since I bake a lot, I also wanted a kitchen island because it would give me additional countertop space for baking preparations. I didn't really like marble patterns, but but after chancing upon these infinity surfaces, I thought that this particular pattern complemented the wood accents well, so I went ahead with the idea. 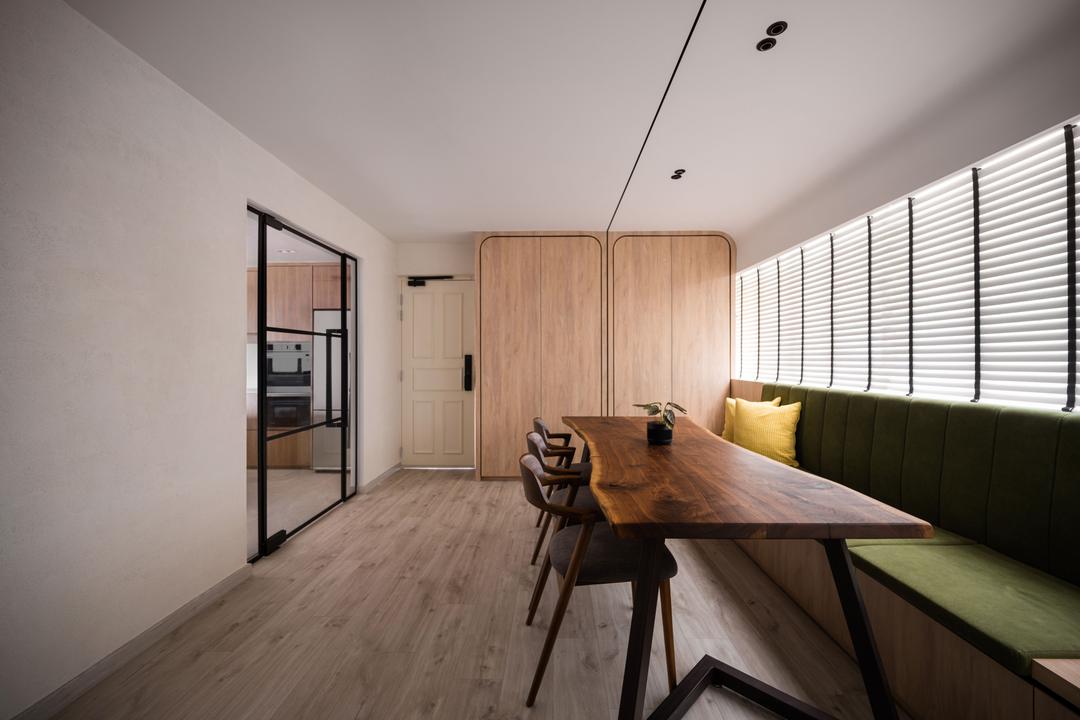 On renovating the master bedroom and bathroom 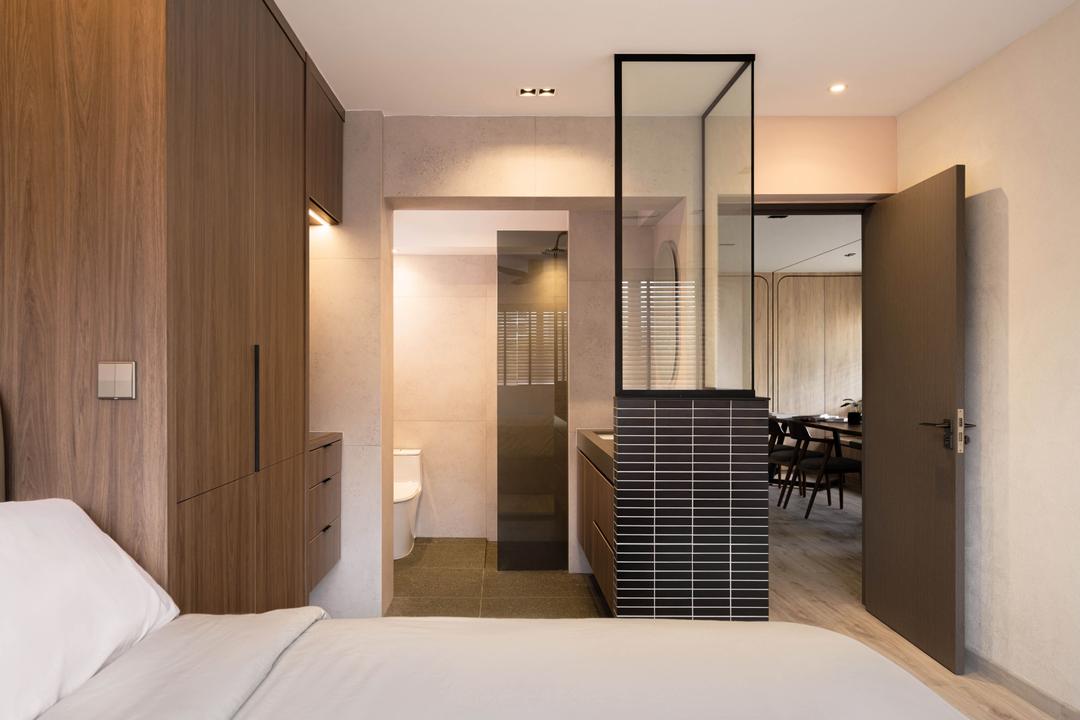 SY: The main challenge with the master bedroom WC was that it was very small. After some brainstorming, Kobe eventually suggested turning it into an open-concept space to make it feel bigger, which I think worked out because it made the bedroom more seamless. So no, it’s not because I’m an exhibitionist, like the contractor thought (laughs). 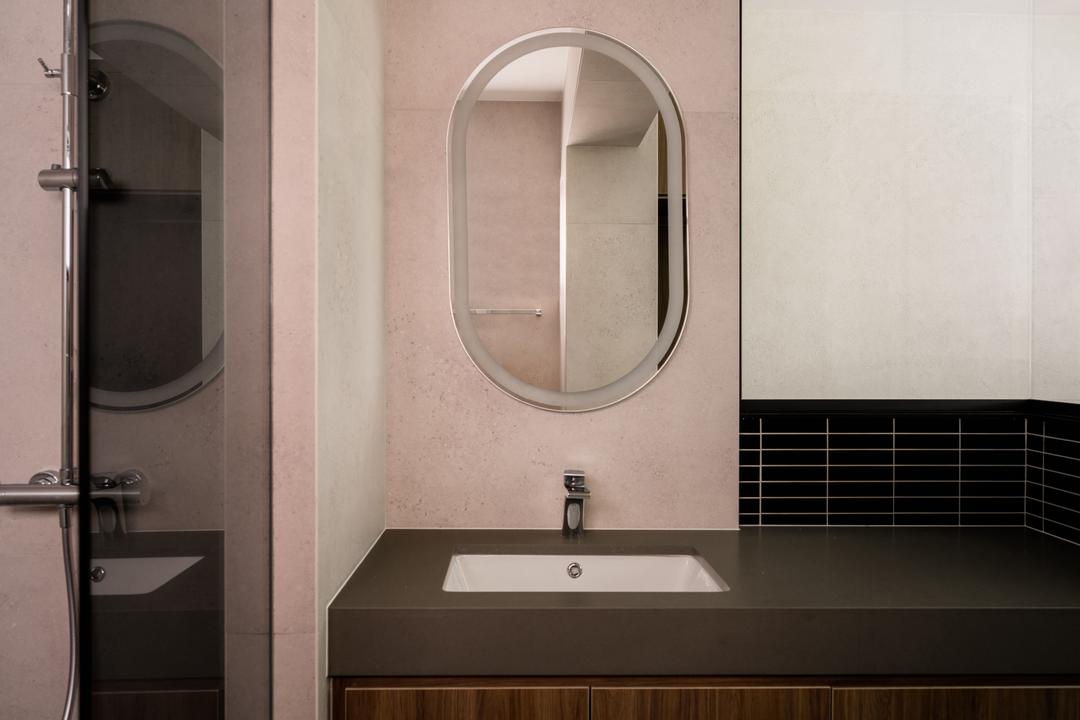 To make the bathroom appear bigger, Kobe installed a long bathroom counter that extends into the sleeping area. He also suggested using black subway tiles to add some visual interest to the room.

As for the sleeping area itself, I’ve kept it pretty simple. It has a similar look and feel to the communal areas with a white-and-wood aesthetic, as well as a built-in wardrobe with a little nook for my vanity.

About creating the entertainment room 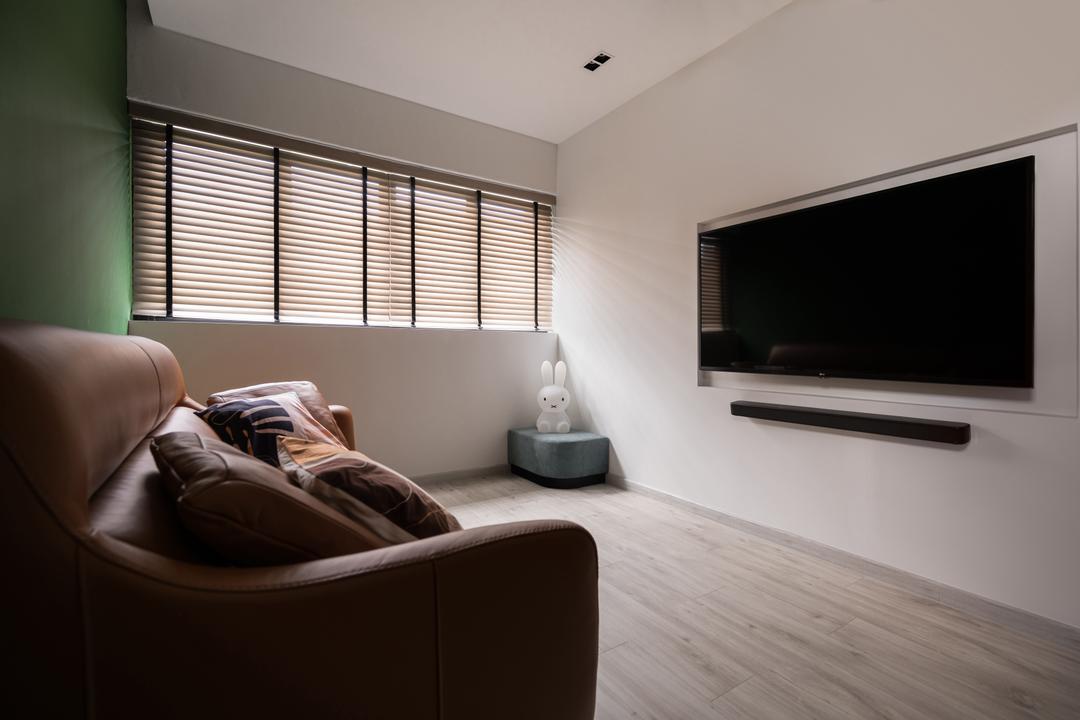 SY: It wasn’t my original intention to turn this bedroom into an entertainment area, but I guess it worked out because whenever my friends with children visit, their kids will hang out in this room, which leaves the adults free to converse in the living area. 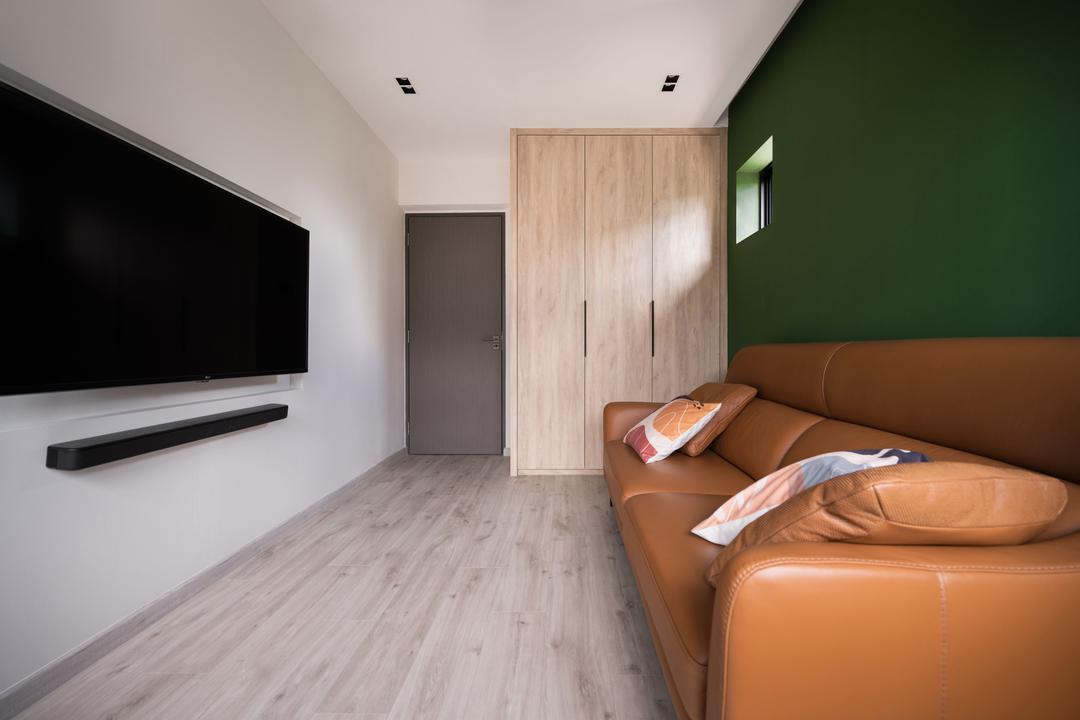 The TV, which was supposed to be in the living room, ended up here. The screen is mounted on a swivel bracket that lets me see the TV from the living room.

I did also think of getting a sofa bed for this room, but I just couldn’t find a comfy one. Instead, I got a regular leather sofa, which just so happens to be really nice to sleep on. Plus, the brown complements the green accent wall. 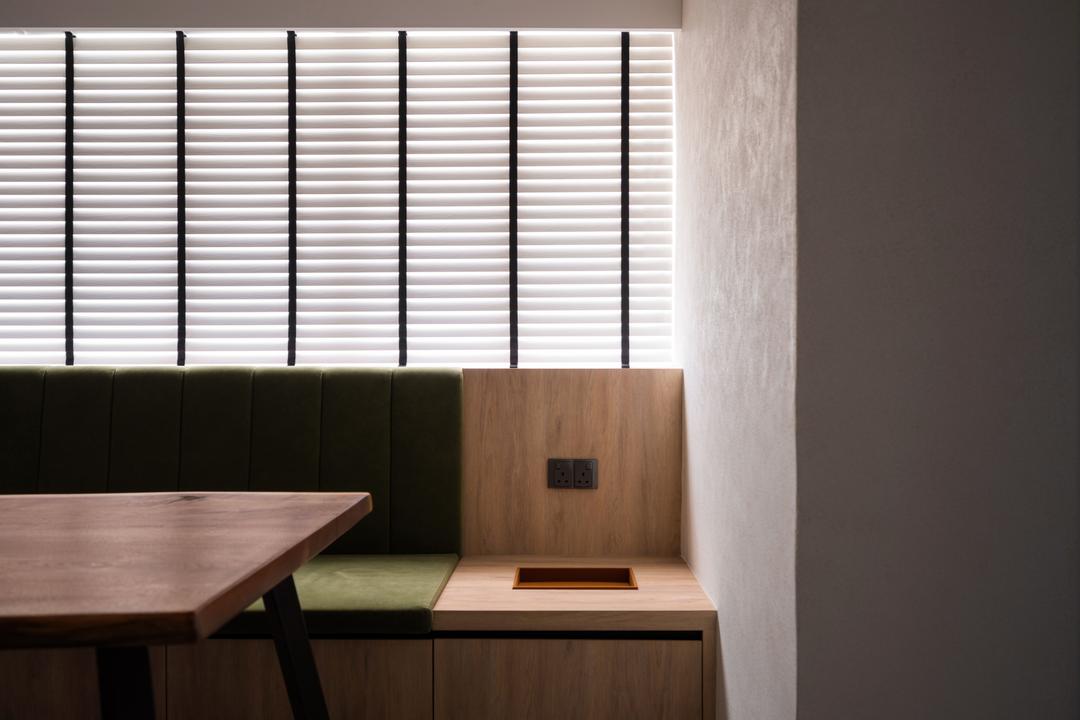 SY: Honestly, I found the renovation process quite stressful (laughs). There were so many decisions to make and things to consider, and it was so daunting! Plus, I was very worried about how the little things like tiles and laminates would add to the entire cost. 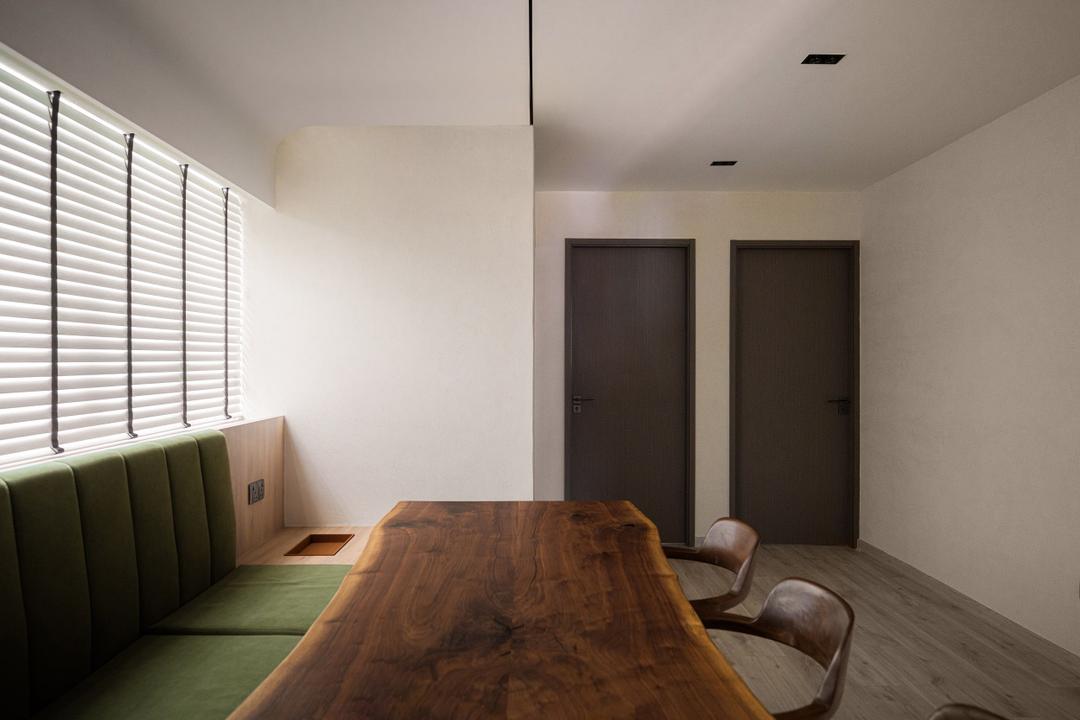 But in the end, it was a fulfilling experience. This flat really feels like home, and the people I’ve invited over before the COVID-19 regulations kicked in tend to linger. To me, that means the house has achieved its purpose of becoming a cosy hangout place, where people can have conversations without distractions.

Kobe also made the process a lot easier. Previously, he had worked on my brother’s renovation, and I already could see the quality of his work, so I had no qualms engaging him. I think we worked well together. Even though I didn’t know how to express what I wanted, he could sense what I was going for and contributed a lot of great ideas. 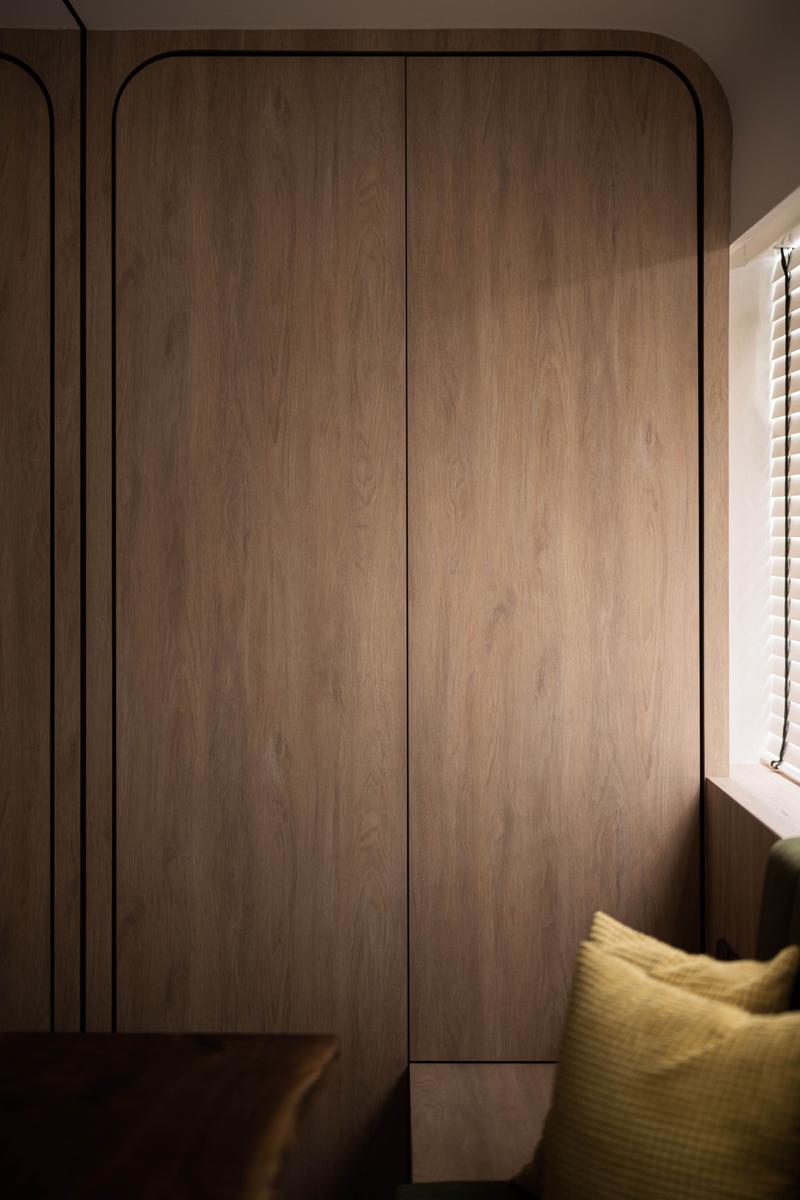 Would I do another renovation? Hopefully, not anytime soon (laughs). And if I did, I would definitely consider working with Kobe again. He’s very particular about the little details, and he’s passionate about what he does. We understand each other much better now, and I know I can trust him to get the job done well. 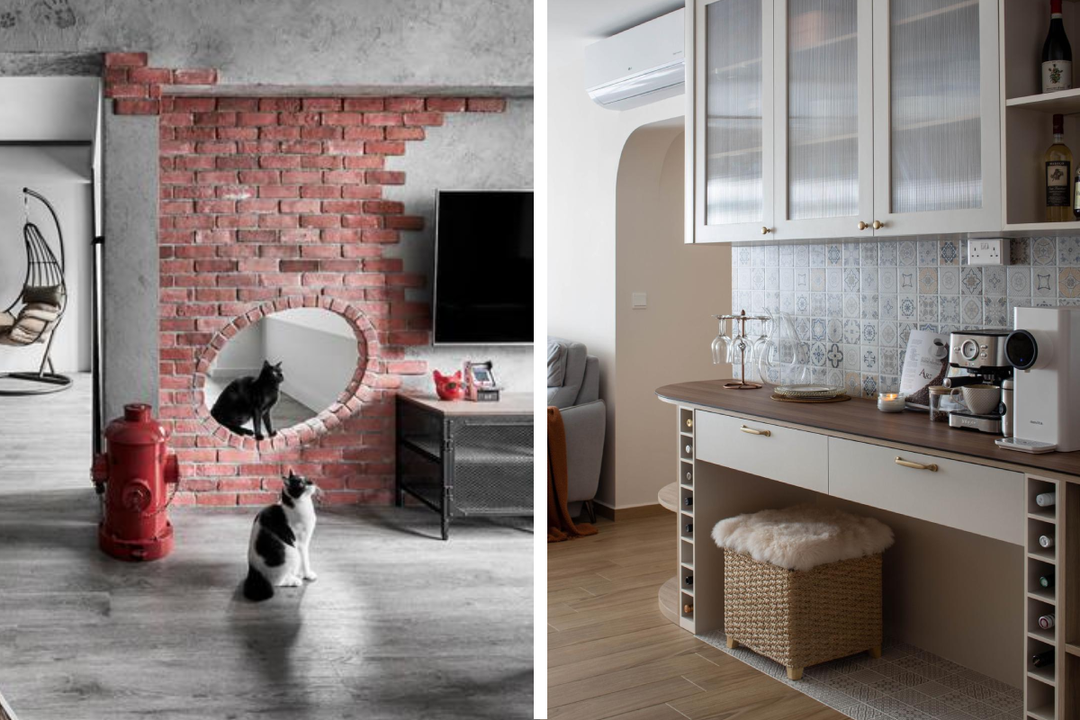 INSPIRATION
8 Unique-Looking Homes That Are (Very) Far From Basic
Take a leaf out of these homes for a non-cookie cutter design! 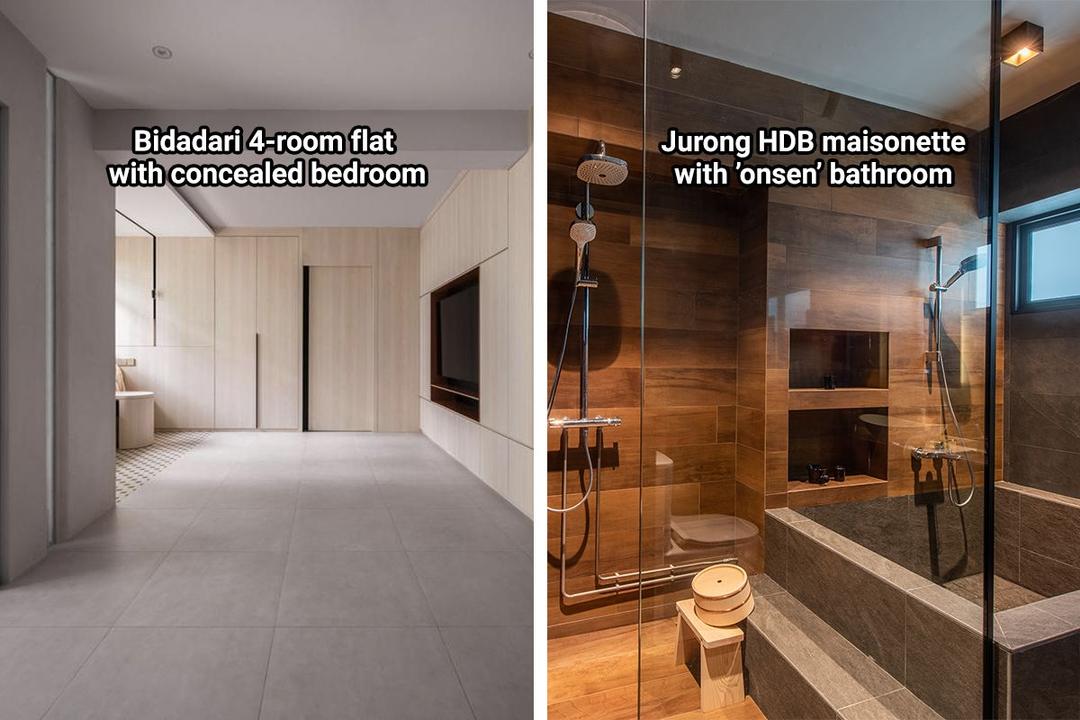 INSPIRATION
6 Out-of-the-Box HDB Flats with Tweaked Layouts and Rooms
Say no to cookie-cutter layouts with these 6 examples, including a 4-room HDB flat with a hidden bedroom and an onsen-equipped maisonette! 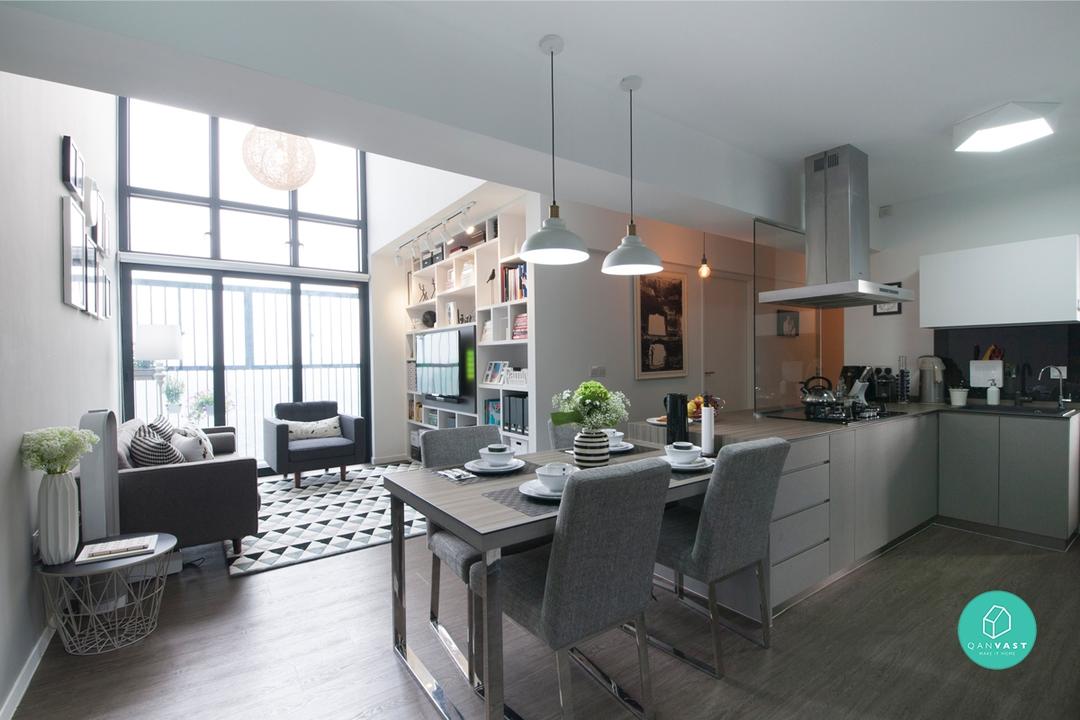 INSPIRATION
5 Rare HDB Types That Are Basically Private Houses
Who says HDBs are dull? With ultra-unique layouts that rival that of private developments, these rare HDB flats offer the landed life - at a bigger scale and lower price.
Preparing the next article…
Recommended for you 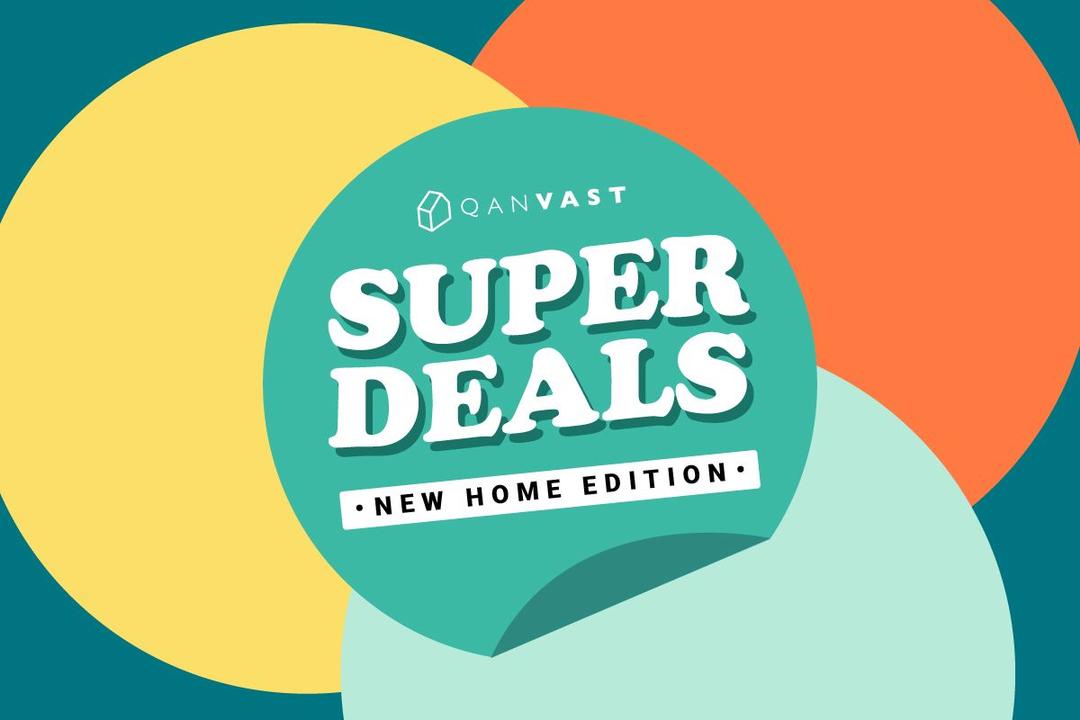 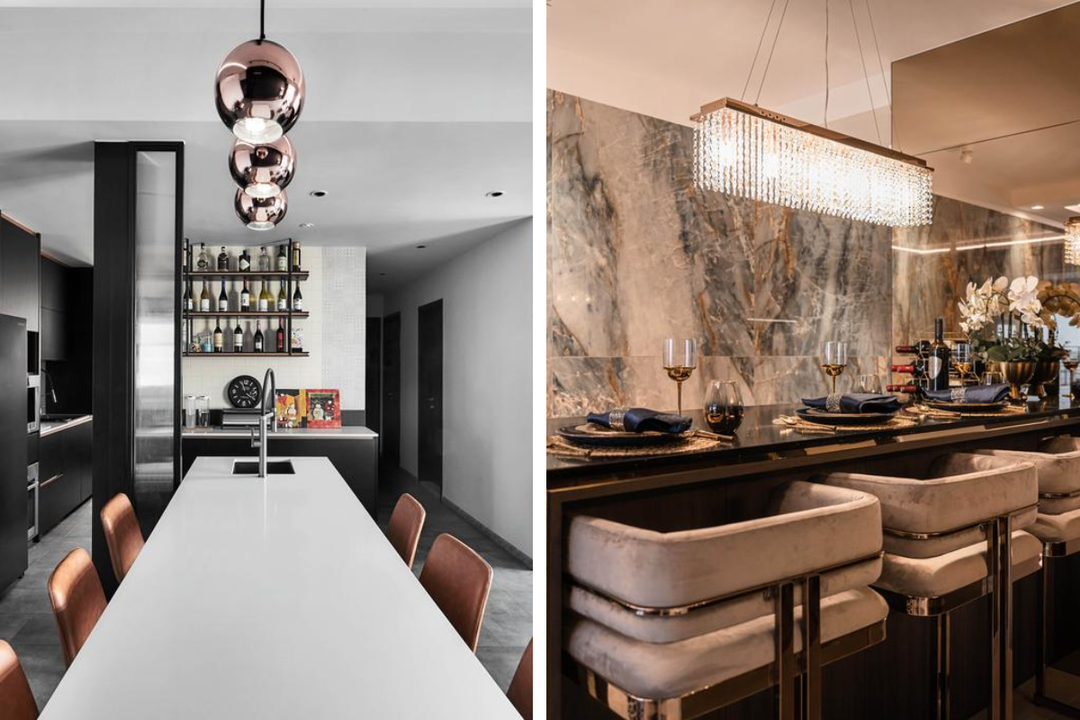 INSPIRATION
6 HDBs and Condos with High Budget Renovations over $200,000