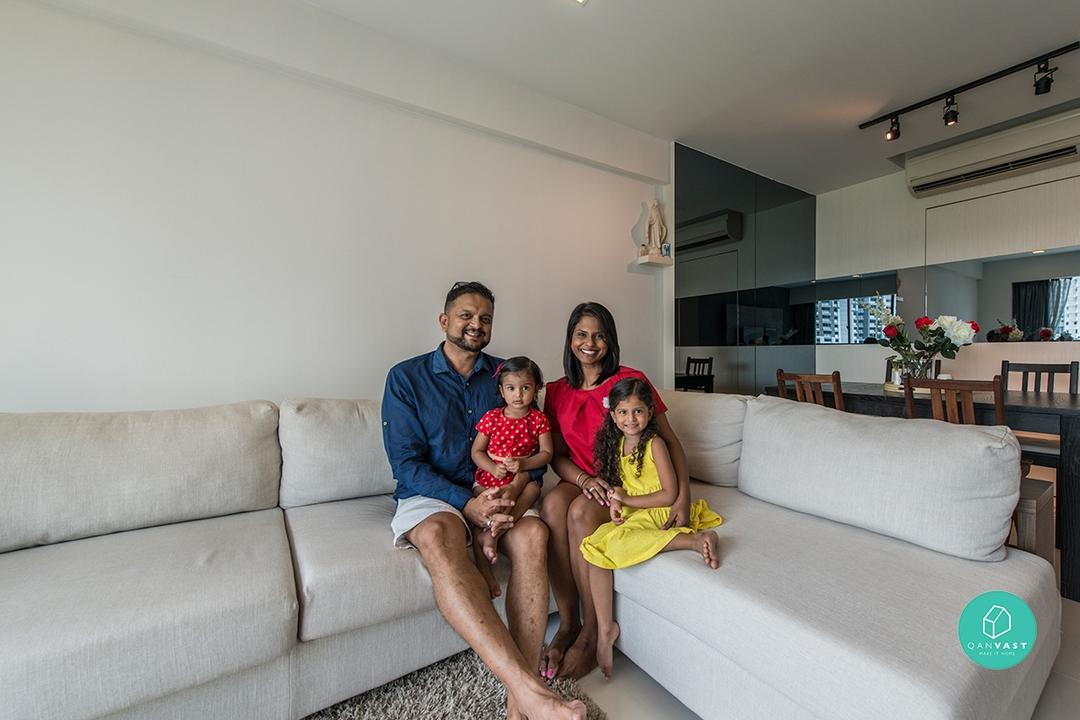 Most homeowners would want to avoid a major overhaul when they move into a resale apartment. After all, why transform a space that is still in good condition? Putting one’s personal stamp on one’s new home is a different matter altogether. With Alex from Edge Interior acting as their creative guide, Ram and his family got the dream home that they desire. 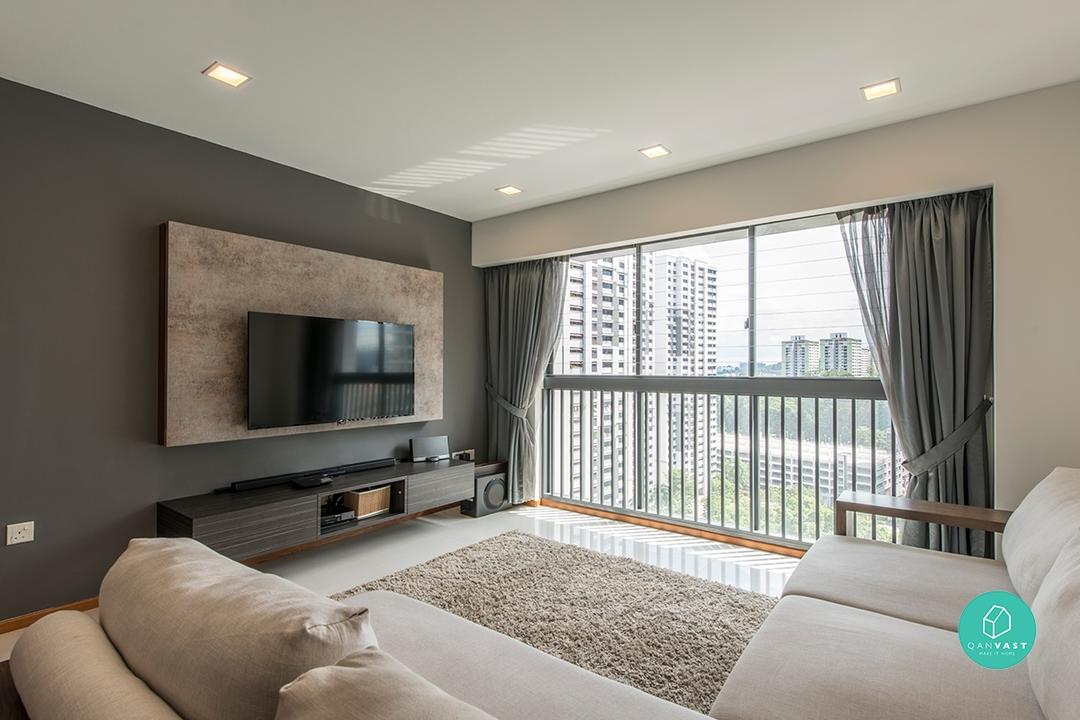 Qanvast: Tell us more about your search for an interior designer.

R (Ram): I began by getting in touch with a subcontractor through a contact of mine who is also a contractor. The subcontractor took about a month to get back to us but I waved it off as he’s my friend’s friend and I was in no hurry at that time. However, after a period of time, he didn’t get back to us which was really disappointing.

Fortunately, a friend at work informed me about Qanvast. When I was shown the website, I was pleasantly surprised by how user-friendly it is. I proceeded to send in a quote request and Qanvast suggested five interior designers for me.

After meeting up with two of them, I decided to go with Edge Interior as their price point was more aligned with our budget. Also, Alex – the interior designer from Edge Interior who we liaised with – impressed us with the speed at which he came back. It was a close fight between the two but Alex’s efficiency and his nice designs definitely won us over. 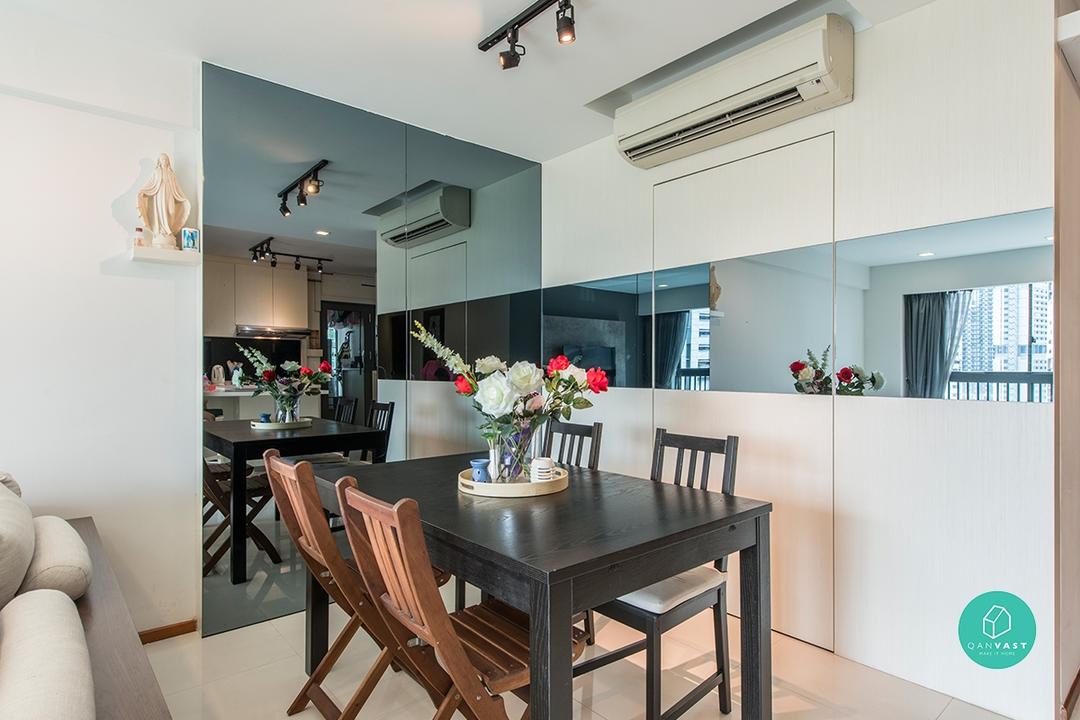 Qanvast: Could you share more about your experience with the Qanvast app?

R: Qanvast is awesome. It’s a fantastic site and it's so user-friendly. The good thing about Qanvast is that price points are attached to the projects which gives readers a good understanding of what kind of home they can get with a certain budget. I also like the personalised service that Qanvast offers. Rather than just corresponding over email, someone from Qanvast will call you up to find out more about your preferences and then provide you with a range of choices that are suited to your tastes.

For me, it felt as though Qanvast has picked my brain! Qanvast did all the homework for us and eliminated the headache that we would have deciding which interior designer we should consider. I was really impressed and recommended Qanvast to a lot of people who are getting married and in the market for a home renovation. 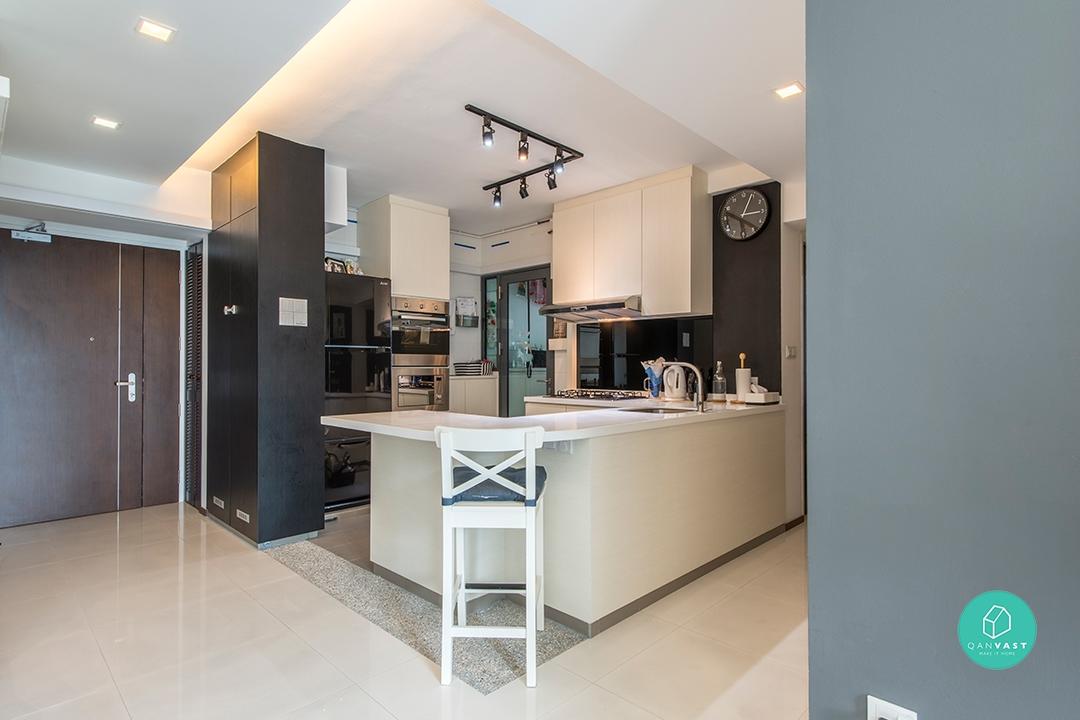 Qanvast: How was it like doing renovations on a resale apartment? 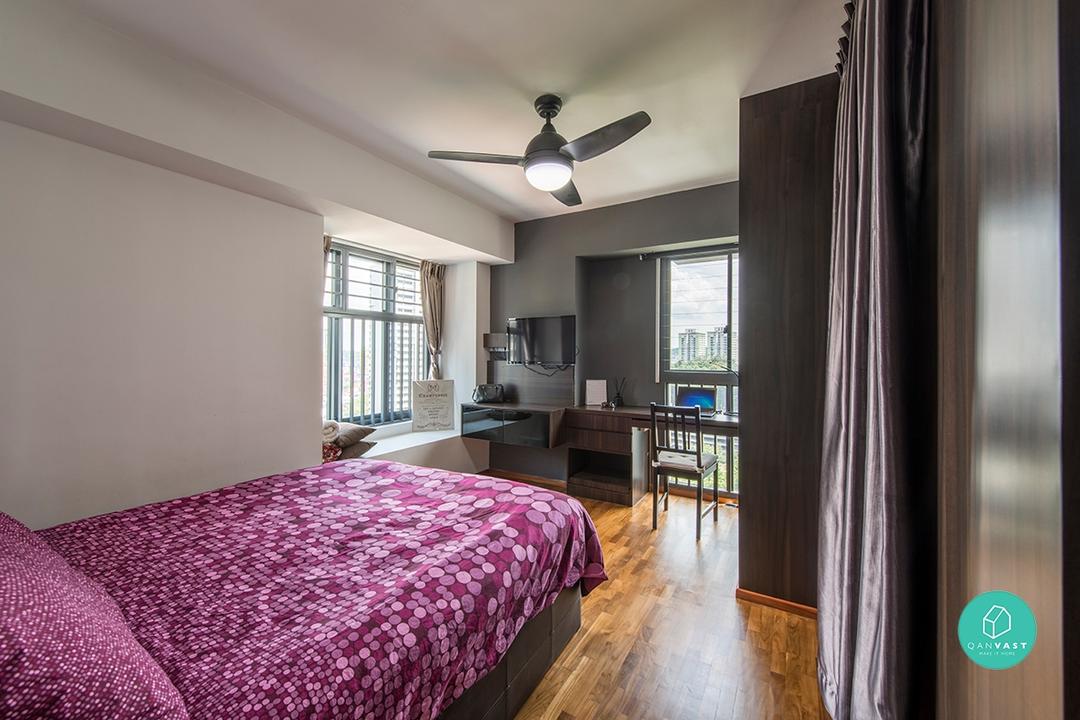 Qanvast: How did Alex add value to the design process?

R: I felt that Alex had a lot of creative input and he was always able to think of alternative designs if there were issues with the original design. We wanted to free up the space in the kitchen and Alex helped us to plan the layout of the space. Initially, we didn’t know how to sort out the positioning of the pipes and the sink but Alex solved this dilemma for us when he came up with an innovative design of running the piping underneath the sink.

Also, Alex was able to make quite a few alterations to the original apartment which helped us to save costs. For instance, the original apartment had a panelled mirror which was really dark. Others would probably remove the mirror but Alex managed to do something to the mirror to alter its colour and make it look lighter. We were very happy as Alex was in sync with what we wanted.

Qanvast: How would you describe Alex?

R: I felt that Alex really went above and beyond; he exceeded expectations for us. Even though he is young – around 24 or 25 years old – he is really meticulous and his designs reflect his attention to details. He accommodated our requests and did a lot of scrambling on our behalf so we didn’t have to make frequent trips to the apartment to monitor the progress. He even worked through Chinese New Year just to complete the renovations on time. At the end of the day, Alex saved us from the headaches which we thought we were going to have. 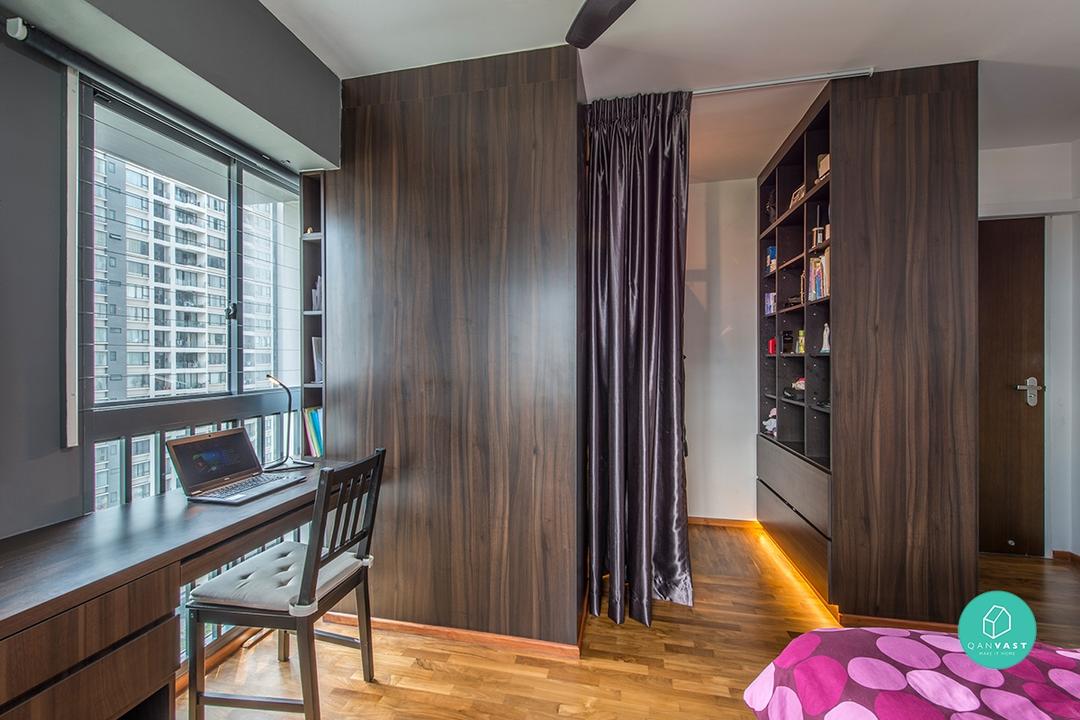 Qanvast: How about working with his subcontractors? How was your working relationship with them?

R: The subcontractors were really easy to work with. One of them was practically living in our house and he took care of a lot of additional things on top of his own work. He didn’t tell us personally but we found out about it and were really impressed with his level of service.

I also remember an experience we had with the air-conditioning man which Alex introduced to us. I thought we were going to spend a bomb on air-conditioning. However, the man assessed our air-conditioners and told us that we could save two of them as he could help us to recondition them. He was really transparent and as a result, we could save some costs. We really appreciated that.

Qanvast: What was it like working with your wife on the renovation journey?

R: She nearly sent a hit man to take me out [laughs]. My wife didn’t think it was a necessity to install a rainshower. I really wanted it though. We decided to compromise and I gave in to her request for a walk-in wardrobe and in return, I got the rainshower. For the rest of the renovation, we were mostly in sync. 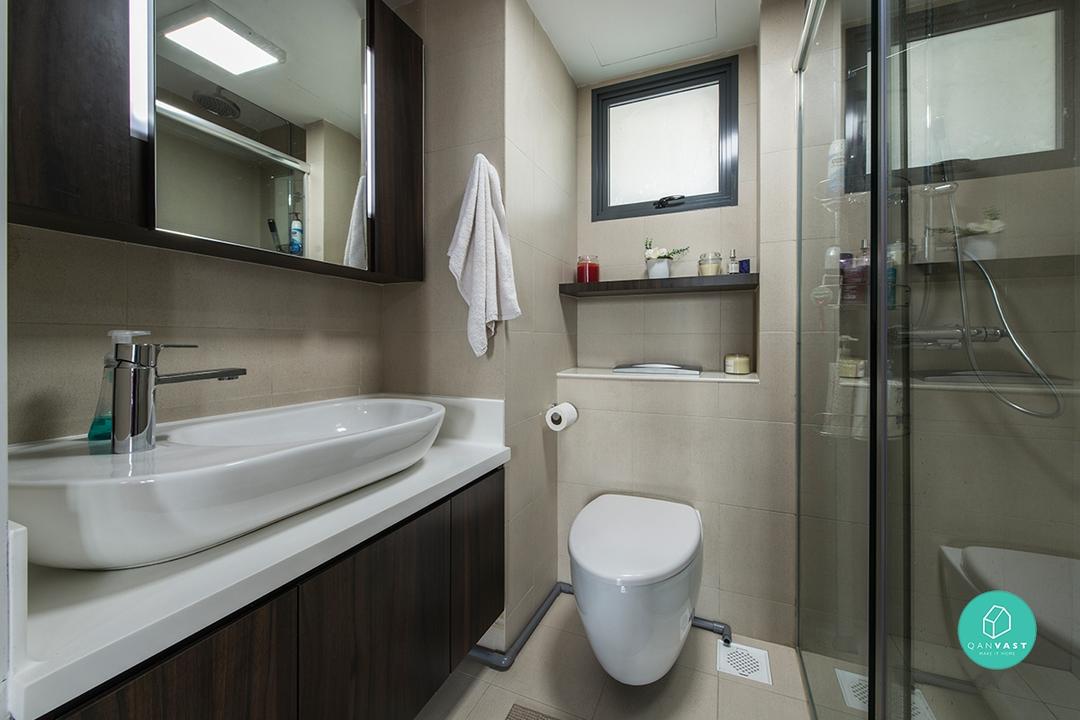 Qanvast: After the renovation, are you still using Qanvast?

R: As Qanvast is free, it is a great platform for home design inspiration as compared to interior design magazines where one needs to pay a monthly subscription fee. I still visit the website sometimes to look at visuals of different homes to keep myself inspired. Even though we have just completed the renovations, we might renovate our home in future and referring to Qanvast provides us with ideas on how we might modify our home design. I remember seeing a Santorini-inspired home and thinking that I might want to do something like that the next time I renovate. 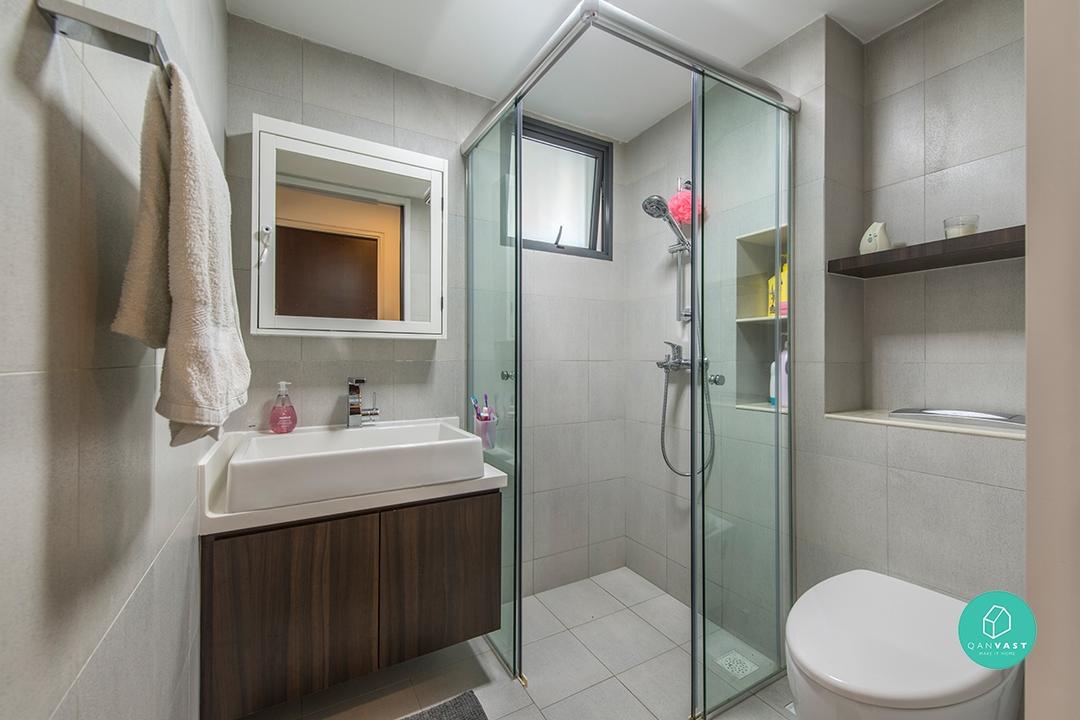 Check out more useful articles and portfolios in the Qanvast app. Download the app from the App Store or Google Play to get more inspirations! 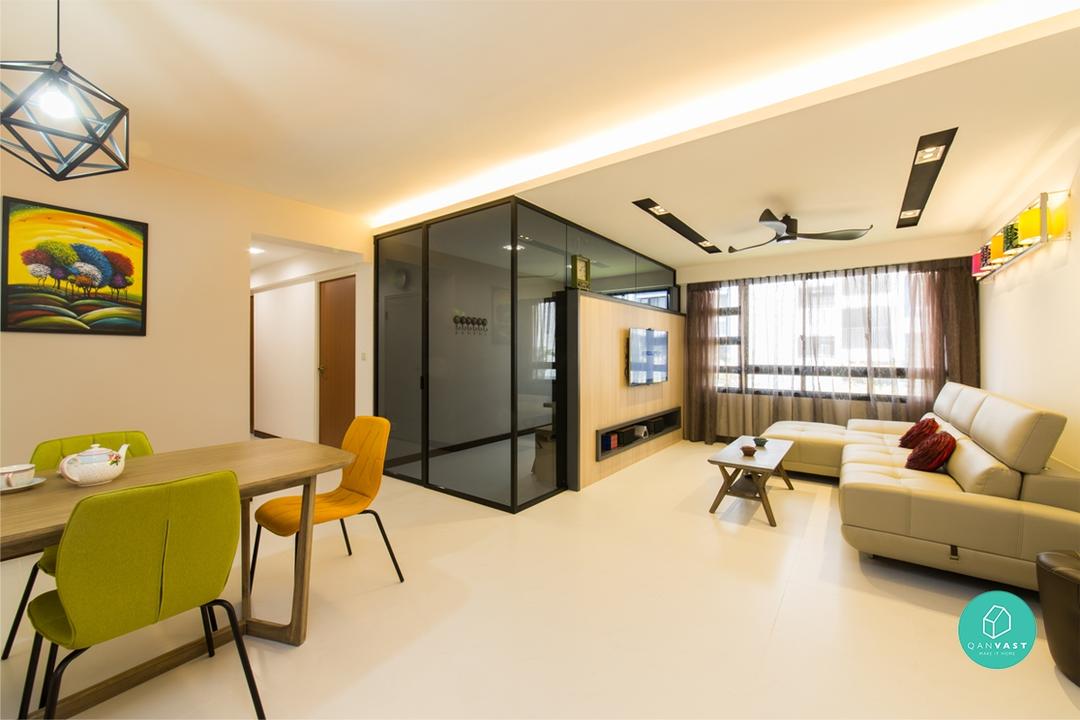 RENOVATION JOURNEY
Renovation Journey: Warm Tones, Cosy Home
Despite being a second-time homeowner, it wasn't exactly easy for Michelle to renovate her new apartment, in another country. With the help of a trusted designer, she now lives in a cosy, tranquil home that is largely inspired by the Scandinavian design.
Preparing the next article…
Recommended for you