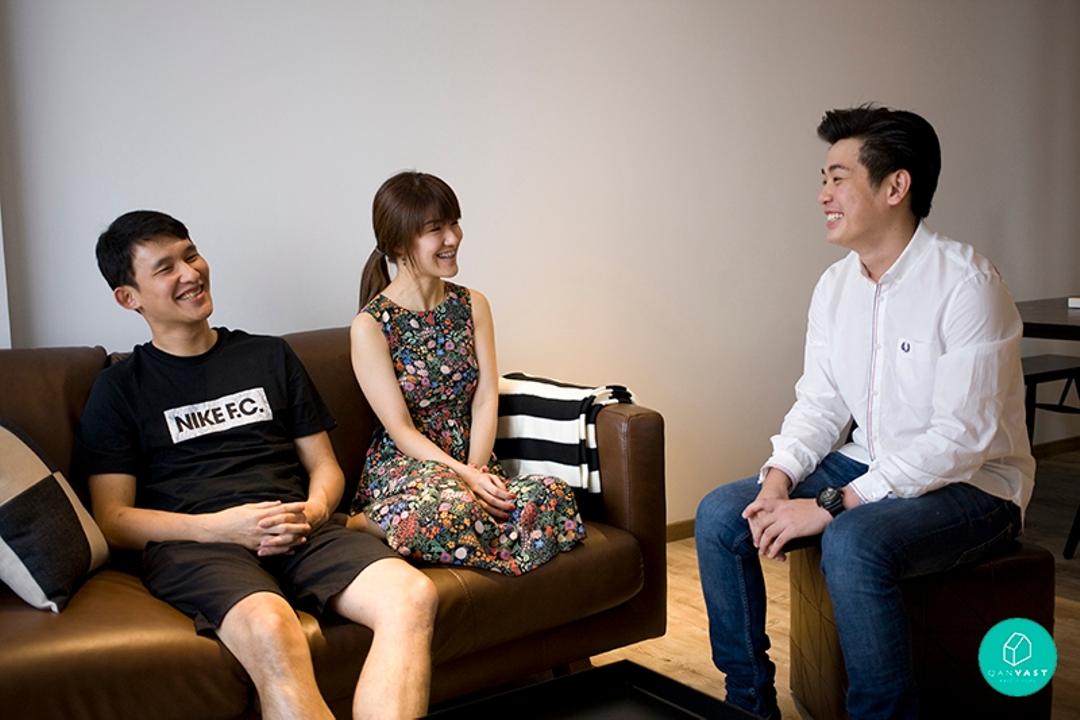 "When people around you throw a disapproving 'No' to your idea or your dream, you went ahead to prove them wrong." In the case of this young couple - Summer and Melvin. The couple had a last-minute disagreement on the design concept, and they decided to change the design concept entirely.

Read on to find out what triggered the dramatic change that led to this stunningly beautiful house.

Qanvast: This has to be one of the nicest homes we have been to! How hard was it to turn the concept into a reality?

Summer (S): It wasn't easy, because we (or rather, I) actually proposed to change the entire design concept just as when we were about to proceed with what was initially discussed. 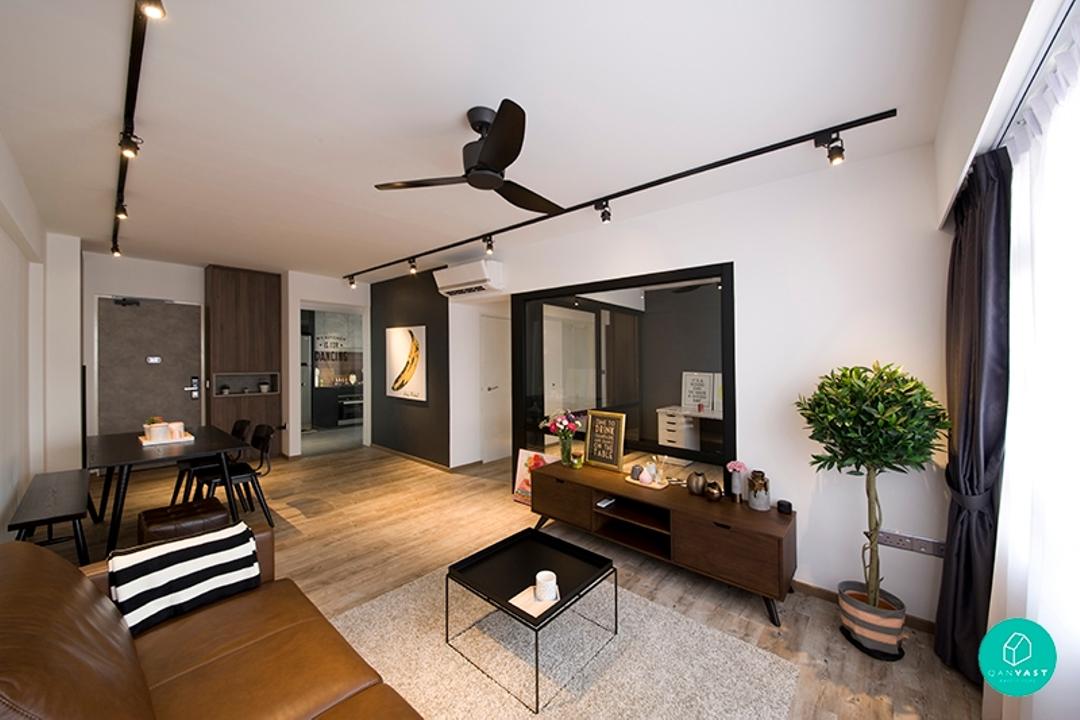 Qanvast: How did that happen? What was the original design concept?

S: Then we saw this sofa in Commune and I fell in love with it, and then I proposed to change the entire colour scheme of the house.

Qanvast: (turns to Melvin) How did you cope with that change?

S: We fought over it (laughs).

M: I disapproved as I was not keen to change the entire design concept. But after seeing how committed Summer was, I was convinced. She actually stayed up a couple of nights doing up on a Powerpoint on her new design concept to persuade me, before we approached See Wee (our interior designer) together. 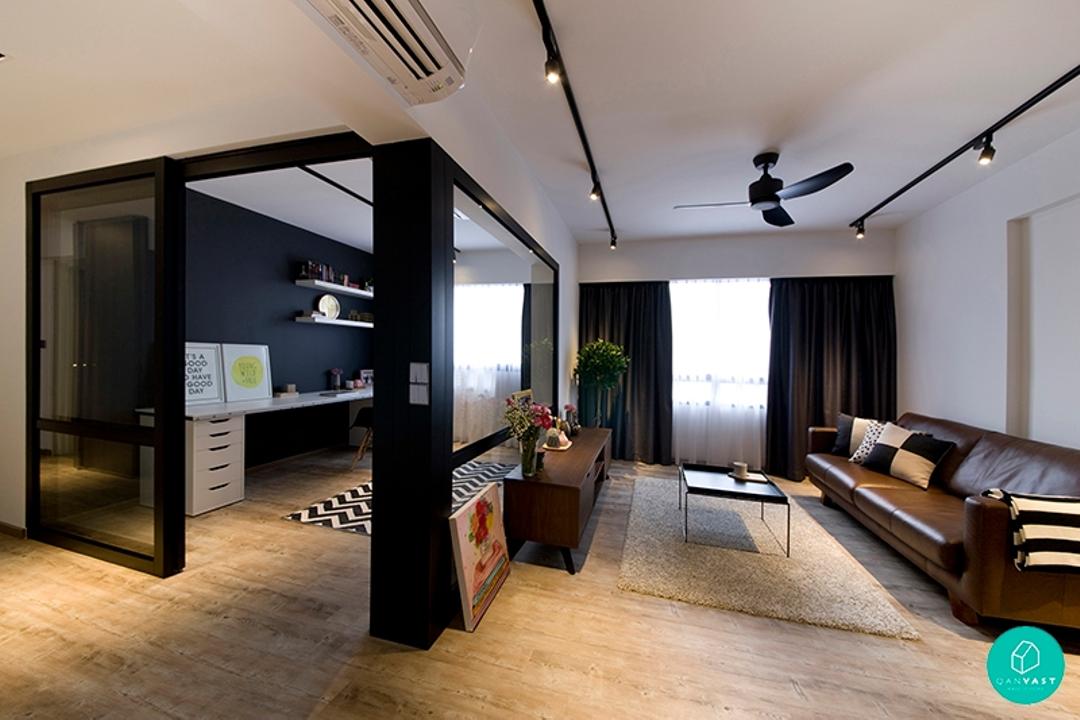 Qanvast: (turns to See Wee now) And what was your take on their sudden change of decision?

See Wee (SW): It is quite common for homeowners to make changes to the colour scheme after going furniture shopping. However, I did advise them to stick to the original concept, and also the impact they would face by going with dark colours; such as dust is more visible and frequent home maintenance is required. Plus, with the abrupt change, there will be a slight delay to the renovation timeline.

Personally, I would prefer a lighter colour palette. Dark colours would look nicer on a showflat than in a home. 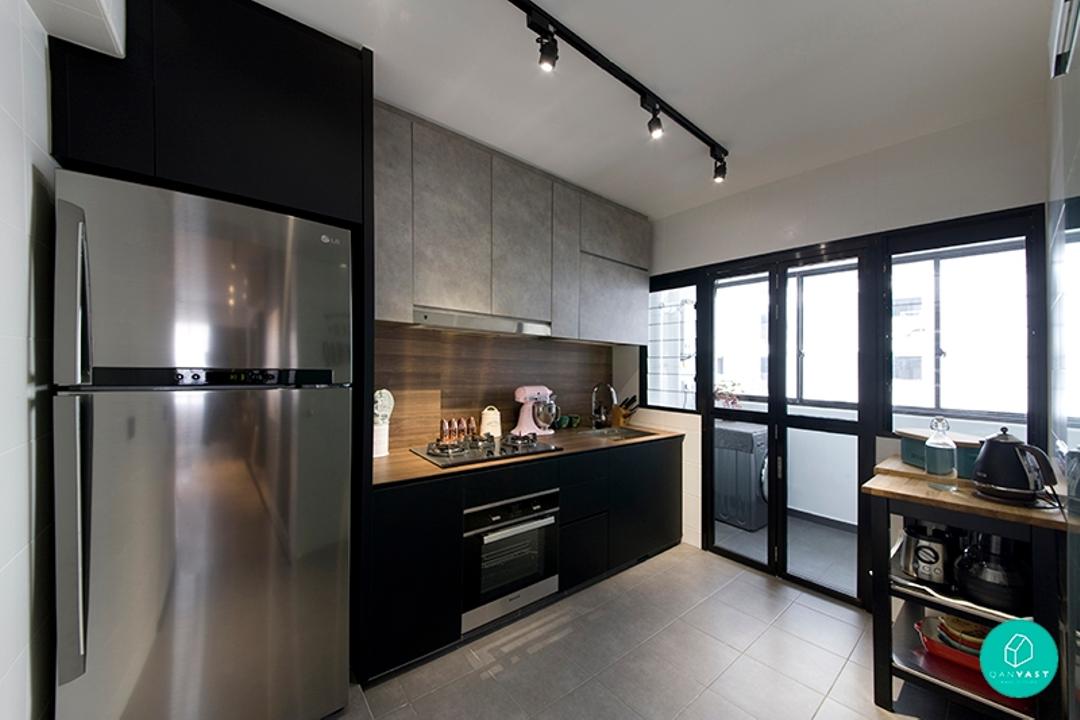 Qanvast: (back to the couple) Where did you get your interior inspirations from?

S: It was mainly from magazines and Qanvast app as well. I have a group of friends who are using Qanvast so it was easy to share ideas and talk about them.

M: Qanvast is really convenient because you can browse the app anytime of the day. Summer would sometimes send me pictures from the app while at work and this speeds up the process of consolidating our ideas instead of having to sit down together and discuss about them.

S: The downside about magazines is that, it is really heavy to lug them around when we were out meeting various designers. I like how Qanvast app is free from advertisements, and it is really an easier way to consolidate ideas. 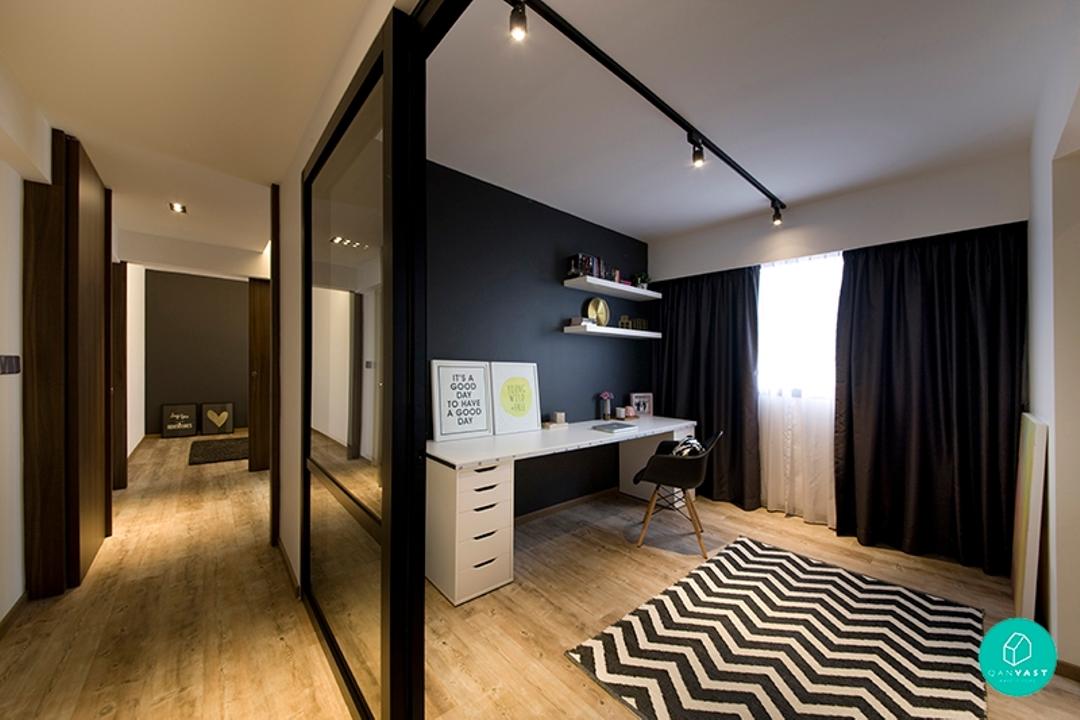 Qanvast: How many interior designers did you meet before selecting See Wee? What was the experience like?

S: We met up with four interior designers. One of them wasn't too honest with us when we asked about the new regulation on cement screeding. Then there was this young designer from another firm who came up with good design concepts, and he seemed really eager to please us. Unfortunately, we didn't have a good chemistry with him.

M: See Wee was the third firm we met and we felt most comfortable with him. We were quite sold by Wee Studio when we first stepped into their showroom actually. 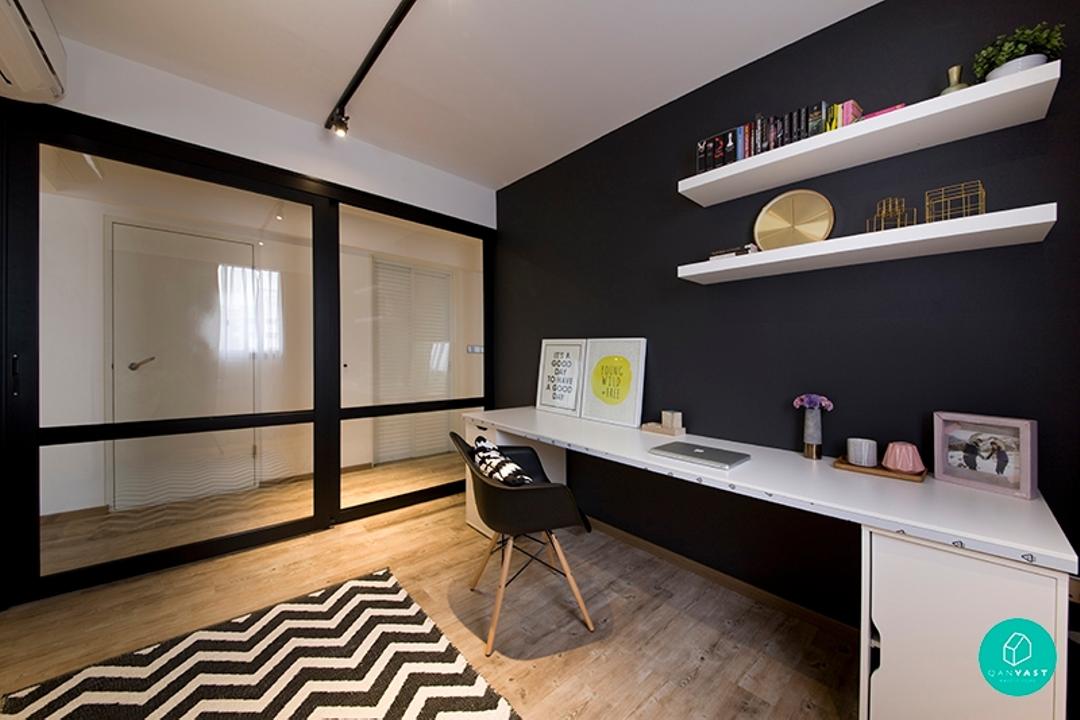 Qanvast: What made you choose See Wee?

S: I could better relate to See Wee than the rest of the other designers we have met, in terms of what I envisioned for my home.

M: I like the honesty and transparency from See Wee. When we approached other designers on the issue of cement screeding^, they claimed that they will charge us on cement screeding, whereas See Wee simply told us to approach HDB directly and appeal.

^Note: Pertaining to the new regulation on cement screeding for flats. 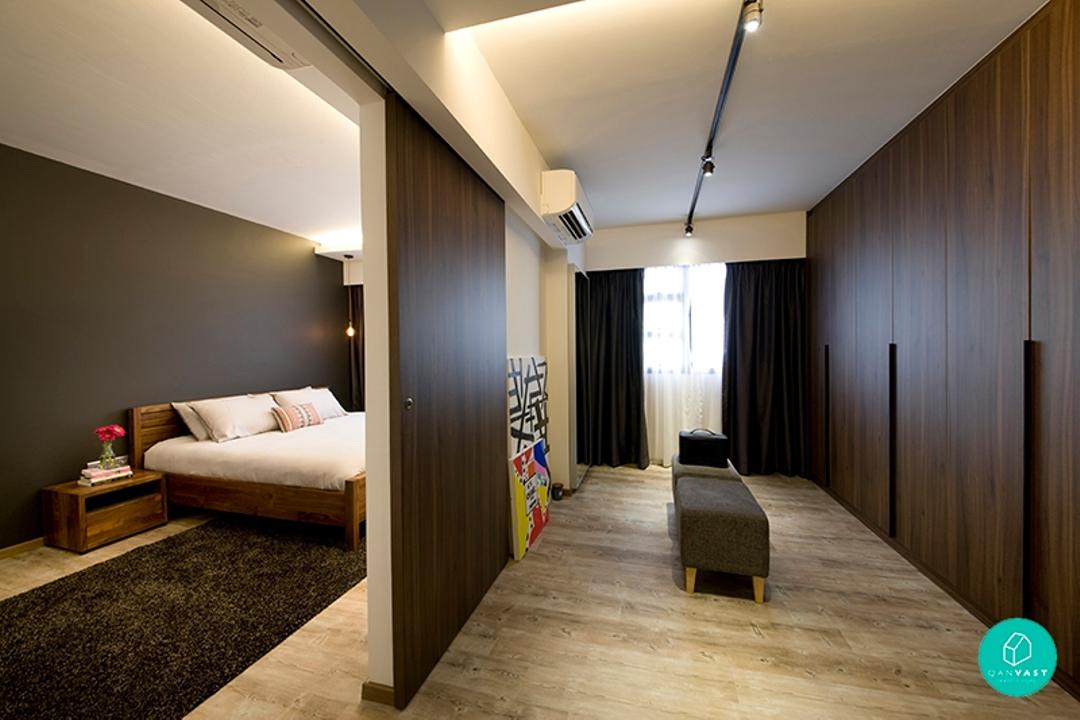 Qanvast: How was it like working with See Wee?

M: See Wee is meticulous and responsive. He takes care of the details, and he is able to advise what will happen if we were to do this and that, instead of reject us upfront without telling us why. He will also do his best to give us what we want.

Take for example, this glass partition that sits between the study and living room. He said cleaning won't be easy, and it will be reflective when we watch television from our sofa.

The dining table as well - he advised that a black table means dust would be more visible. This is something we wouldn't have taken into consideration. 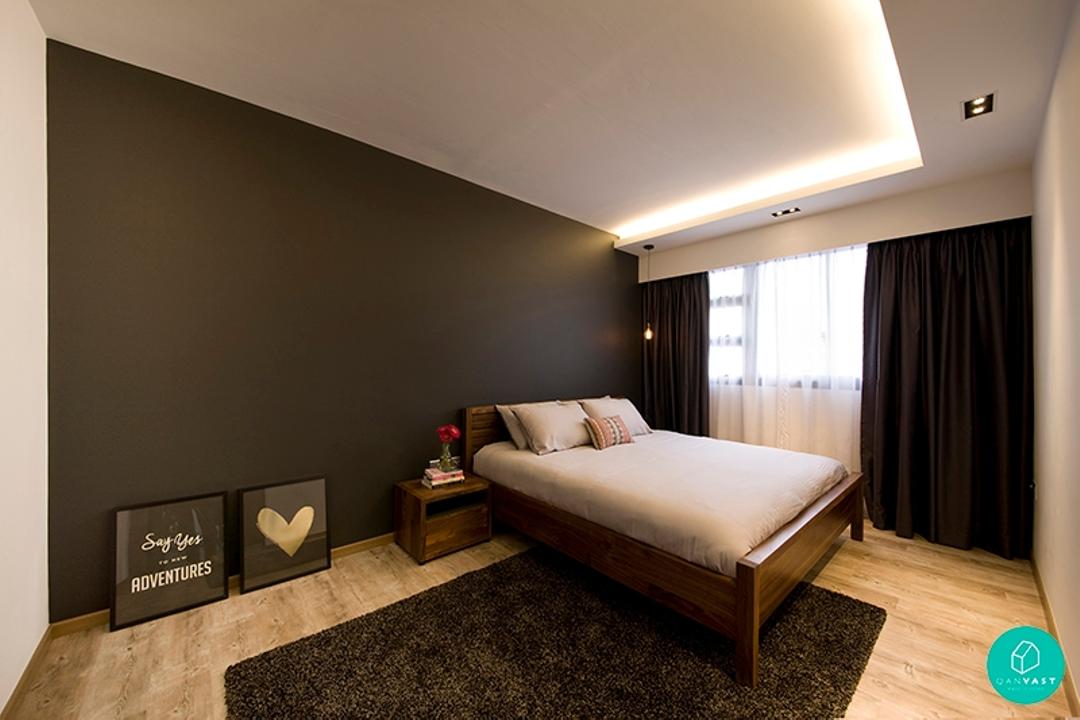 S: Yes, I think that is important to let us know what we can expect if things were to go our way, instead of rejecting us upfront without telling us why. Good communication doesn't work this way.

Qanvast: Where did you purchase your home items from?

S: The sofa and TV console were from Commune, bedroom items from Castlery and Grankfunkt, and dining table was from an online retailer, Mulamu. Some of the artworks around the house were hand-drawn by me, from Arteastiq. 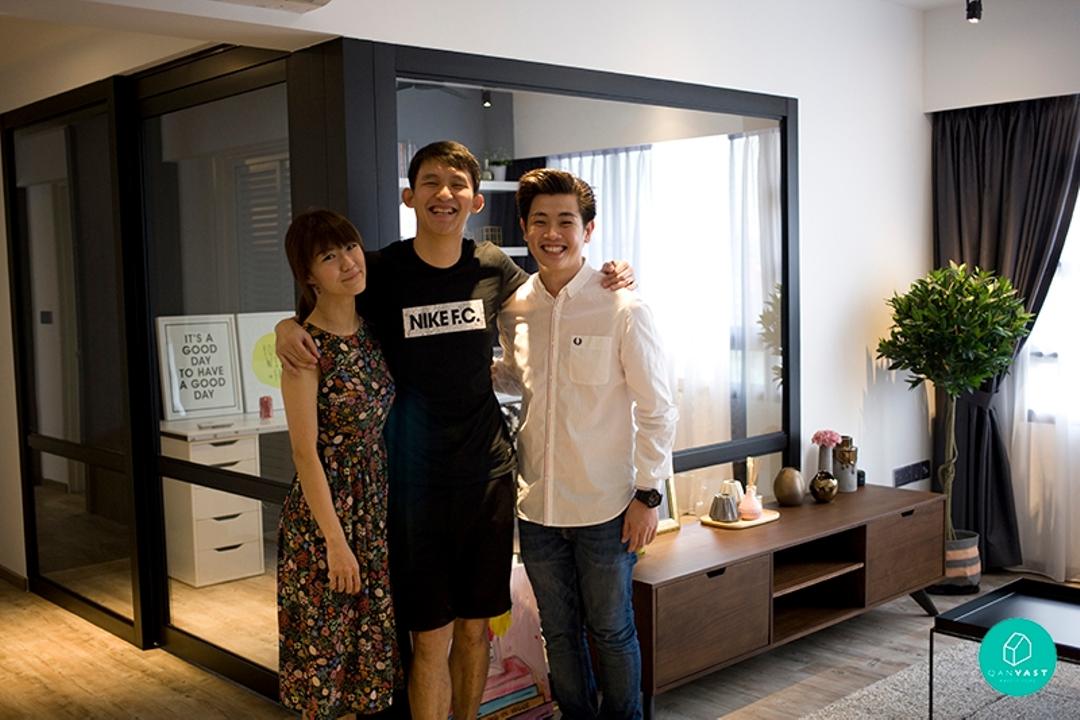 Love what you see here? We have more homeowners who had their beautiful homes done by up their capable interior designers as well. Read on to find out more below!

If you need help to secure a trusted interior designer, drop us a complimentary quote request on the Qanvast app or click here. 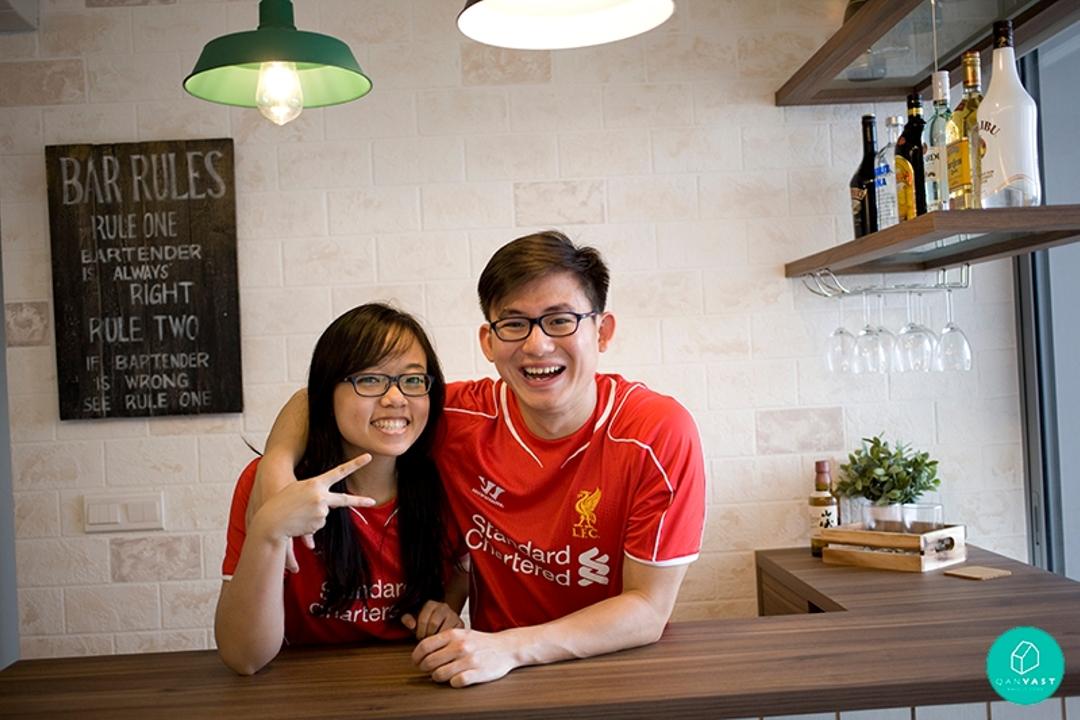 RENOVATION JOURNEY
Renovation Journey: With love, Paris
Xian Yi and Elieen, shared with us their home which is decorated in memorabilia that represent their love journey. Besides Paris and Running Man, there isn't much similar between the two couples. Read more to find out how they compromise with each other's different preferences. 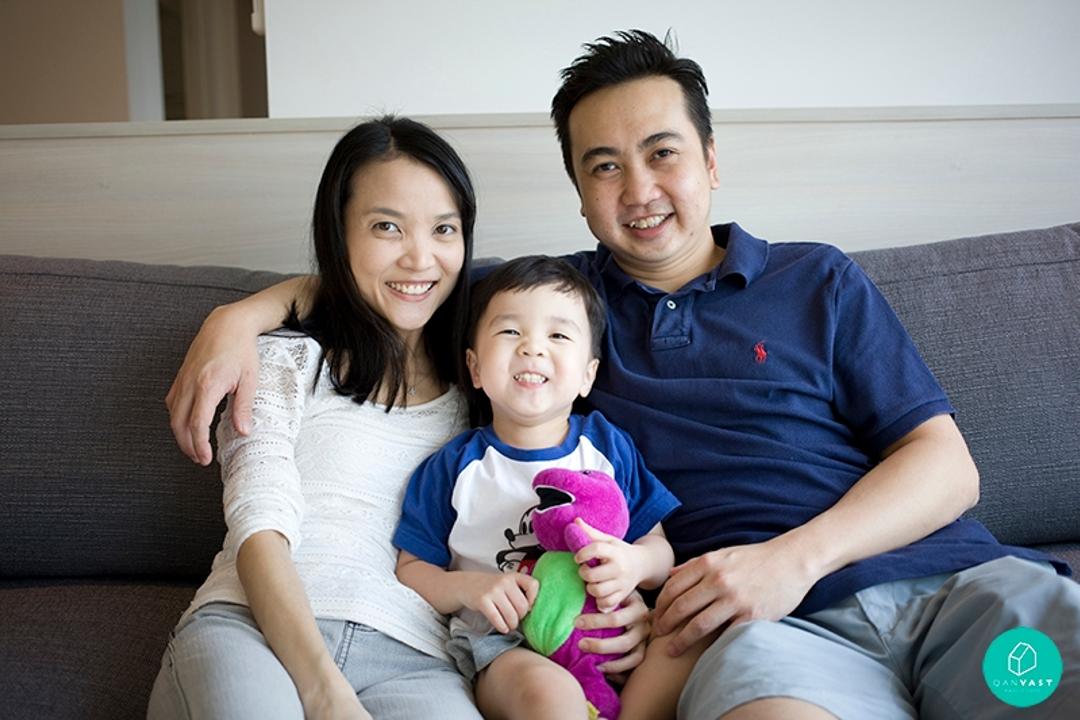 RENOVATION JOURNEY
Renovation Journey: A Minimalistic MUJI Home
Who doesn’t love MUJI’s simple yet sleek products? Interior designer Habit played around with different textures and patterns to recreate MUJI’s minimalistic elegance for this homeowner's home.
Preparing the next article…
Recommended for you