Think renovating is tough? This family revamped their resale unit while they were in the States. Here’s how they managed.

Renovating isn’t easy. And renovating while you’re overseas is a completely different beast altogether. But for Mr. and Mrs. Ng, they took the plunge to make it work. “We have two toddlers and my husband is working. Making a 20-hours trip from the US to manage the renovation project was definitely off the table for us,” shared Mrs. Ng. 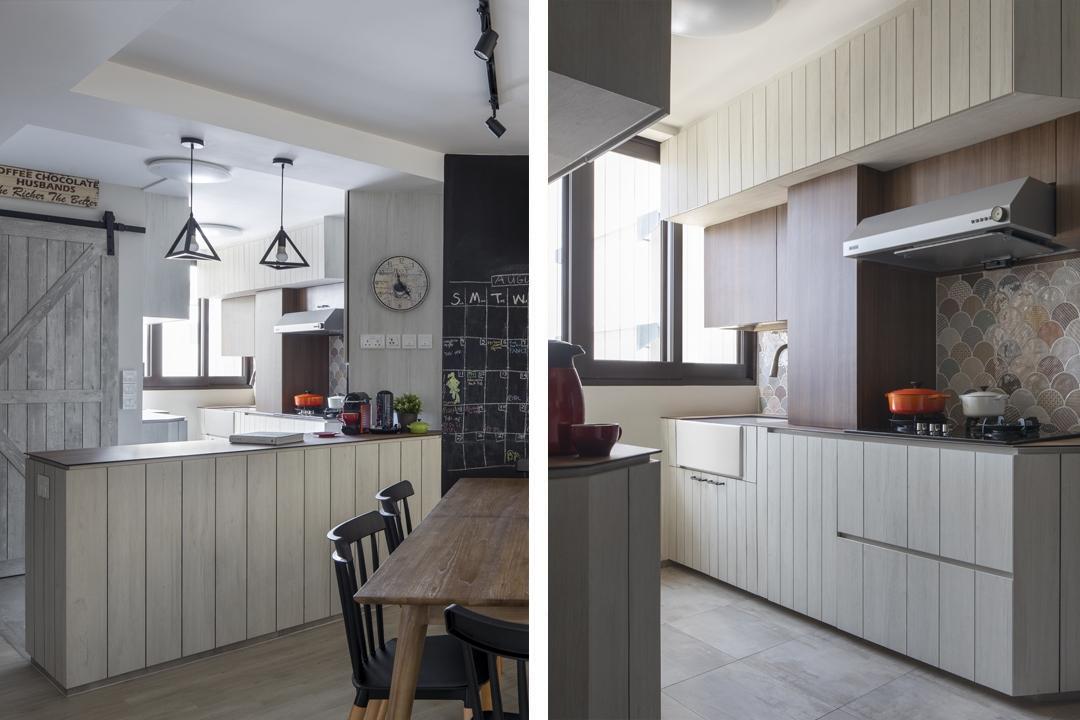 Despite the uphill task, the family managed to ready their home, a 5-room resale unit at Cambridge Road, by the time they returned from the US. And that’s made entirely possible by telecommuting with their interior designer, Prozfile Design’s Mabel. More about their whirlwind adventure below!

Mr. Ng (Mr. N): I’m an engineer and my wife's a healthcare worker. We have two young kids, a boy and a girl, plus a helper – so there’s five of us occupying this 5-room HDB flat! 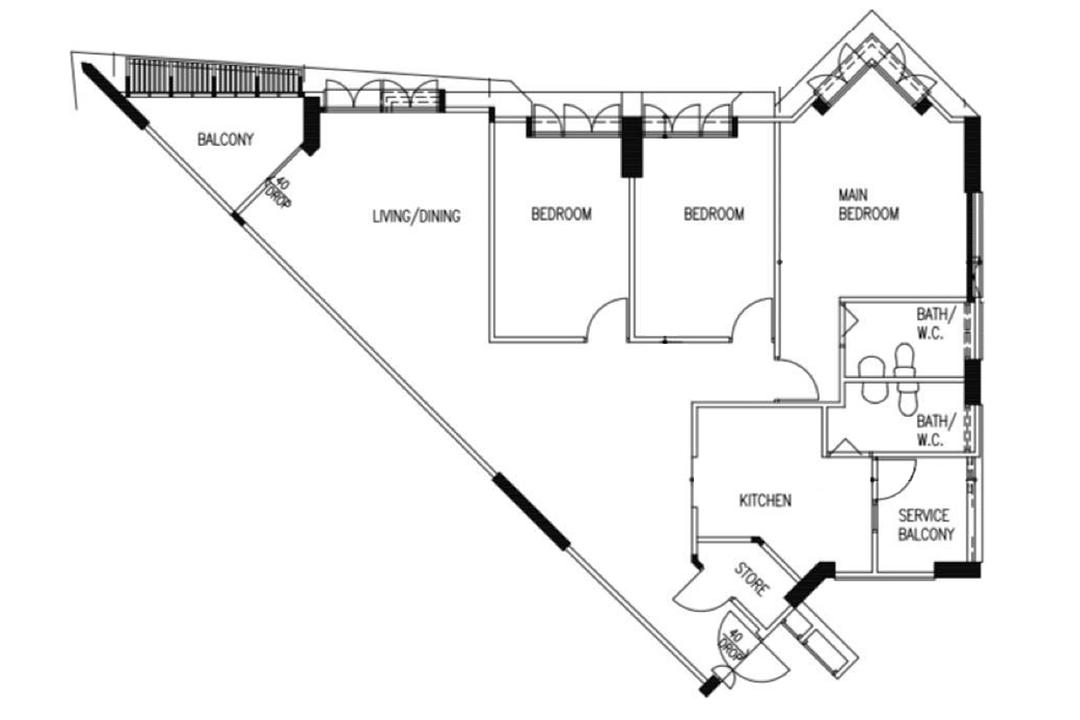 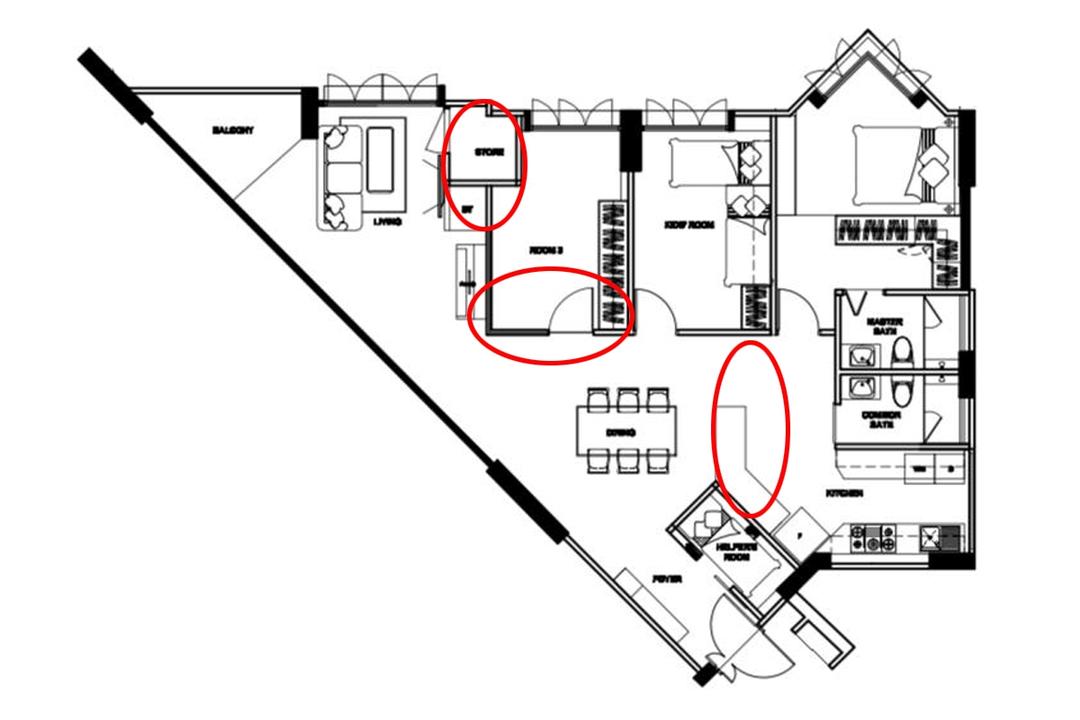 The home’s layout, post-renovation. Red circles indicate where walls have been hacked away.

About their home’s concept

Mrs. Ng (Mrs. N): Do you know that you are presented with different recommendations on Pinterest depending on your geolocation? Since we were in the US, we get very US-inspired design ideas. And that included our favourite – the country-style design. I think it’s safe to say that our home’s design is heavily influenced by our stay in America [laughs]. 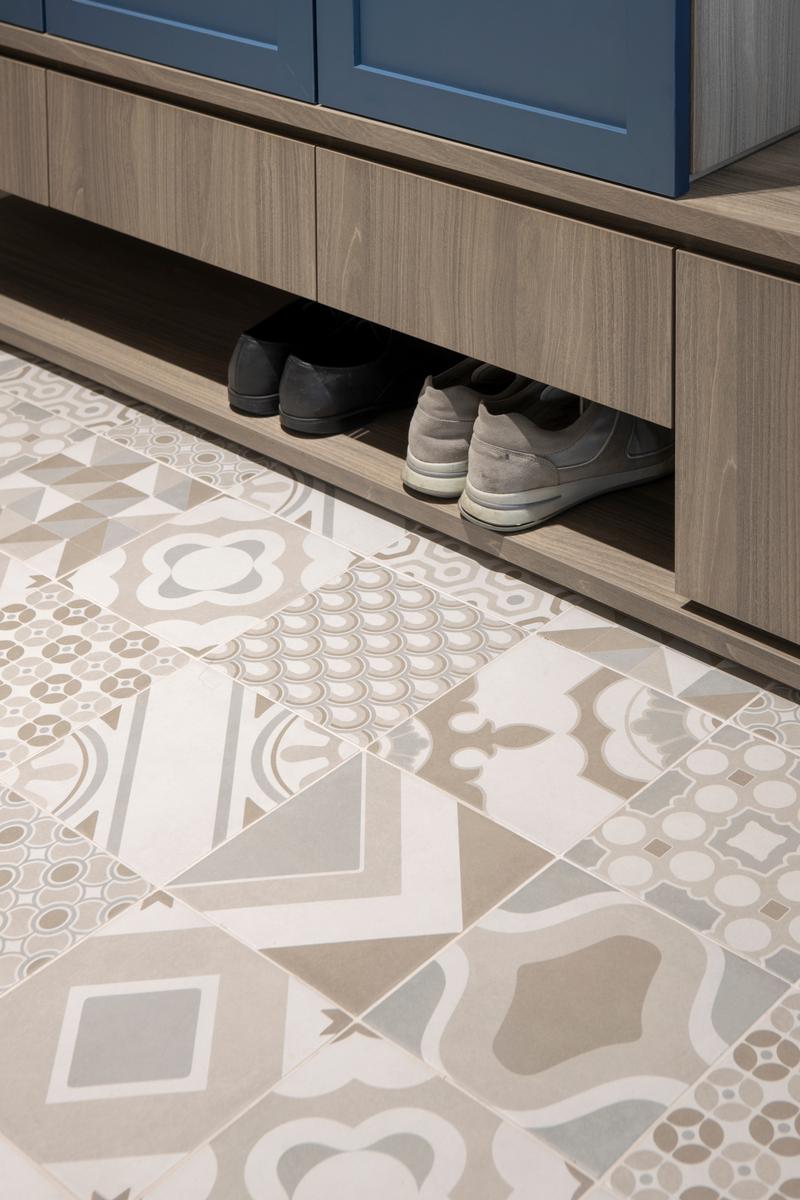 Different tiles are used in each area to demarcate the interiors.

But, picking out similar materials and furniture proved to be challenging. To this end, Mabel really stepped up. She went to Hafary to scout out the tiles, sent us photos of laminates and provided us with multiple iterations of 3D rendering for the various colour combinations.

She even made sure that the sofa and dining table that we selected from FortyTwo would fit the theme and, from a practical point of view, ensured that they were of suitable dimensions.

Mr. N: We wanted to give our helper her own private space, so we expanded the original storeroom an converted it to a helper’s room. However, forgoing storage was also a not an option because we had accumulated a fair bit of stuff when we were in the States. 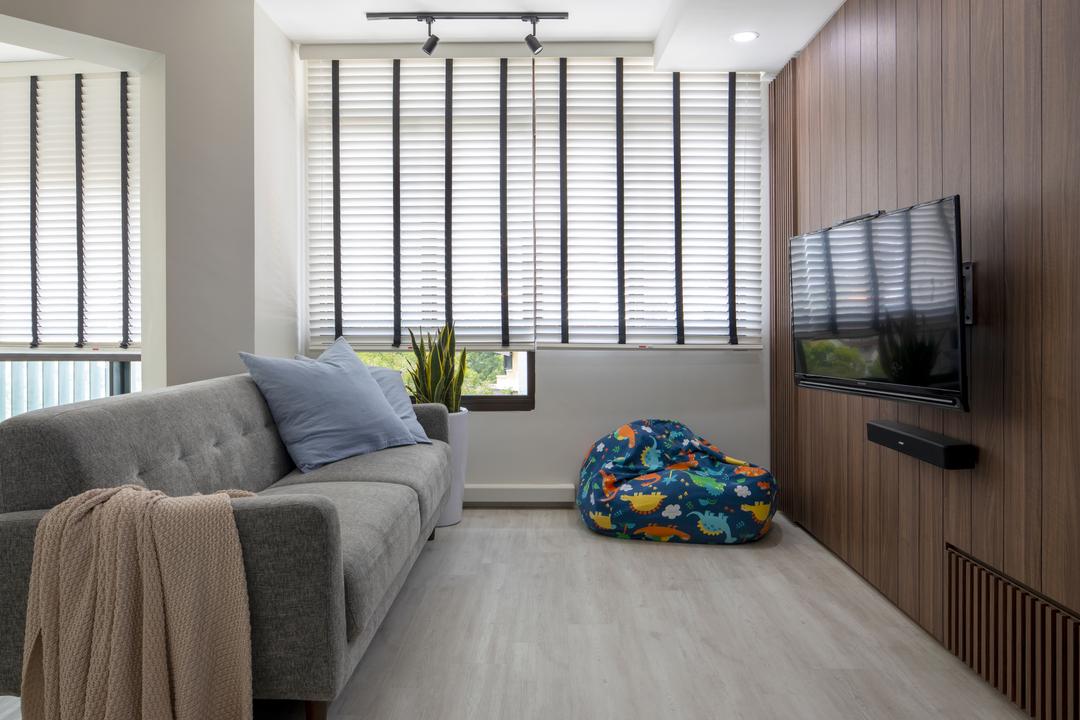 Mabel suggested that we push the wall of the adjacent junior-bedroom-turned-exercise-room in to create a new storeroom. And that’s what we did. We included a feature wall to make the design flow with the rest of the house. 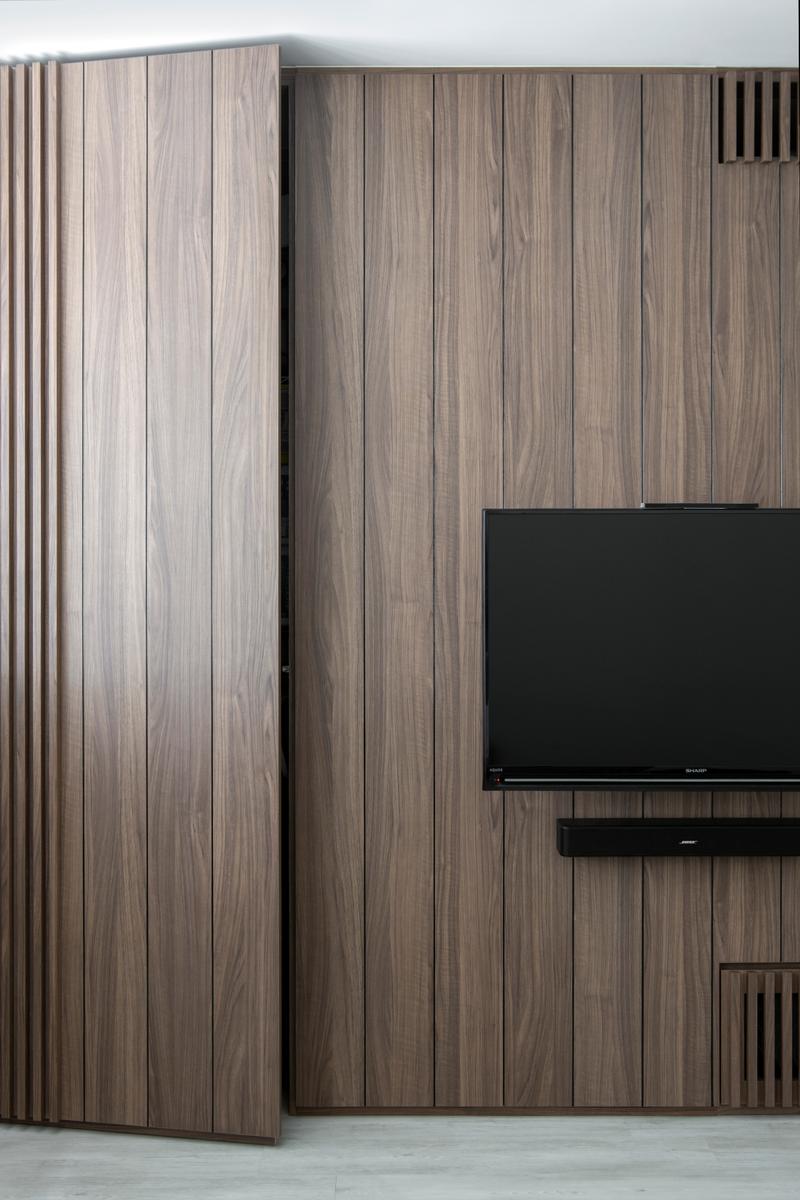 Behind the family’s feature wall lies their new storeroom.

With living room space sacrificed for the storeroom, we decided to mount our TV up instead of having a console.

On changes made to the dining area

Mrs. N: The layout of our unit is a little unique to say the least. It’s triangular in shape, and you don’t really get much light in the dining area. In order to keep it well-lit, we tore down half the wall and installed glass windows for the exercise room. 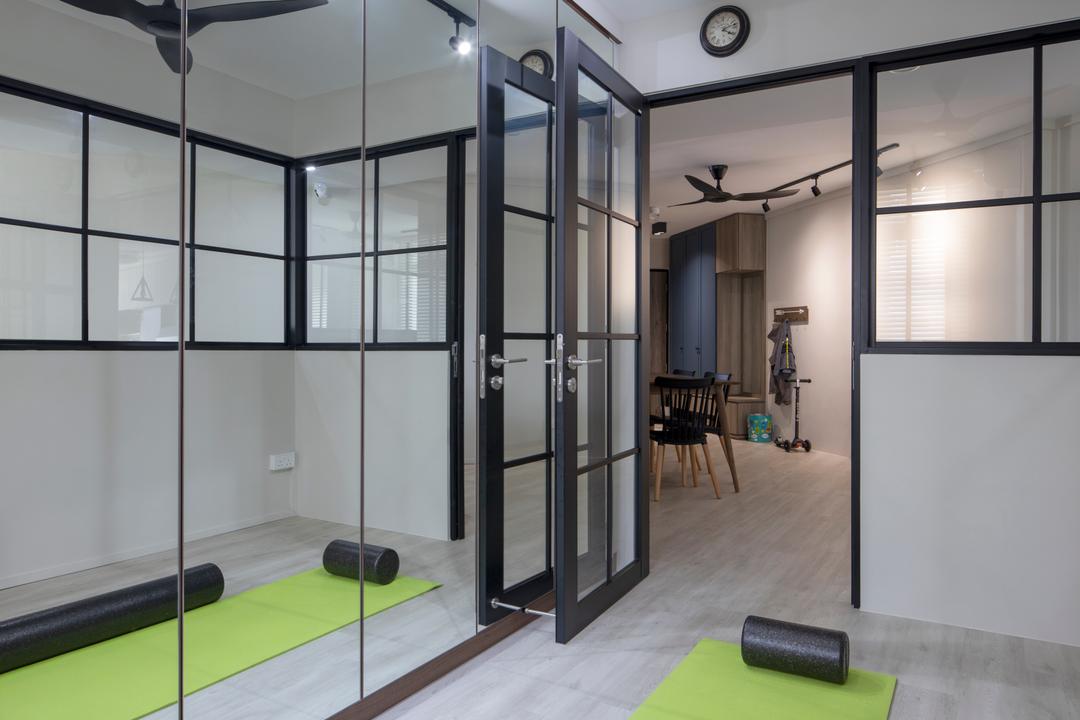 The chalkboard wall was inspired by our previous home – we had a black glass wall then. We wanted a similar design for our kids to doodle. I guess this is better than having them draw anywhere else [laughs]. 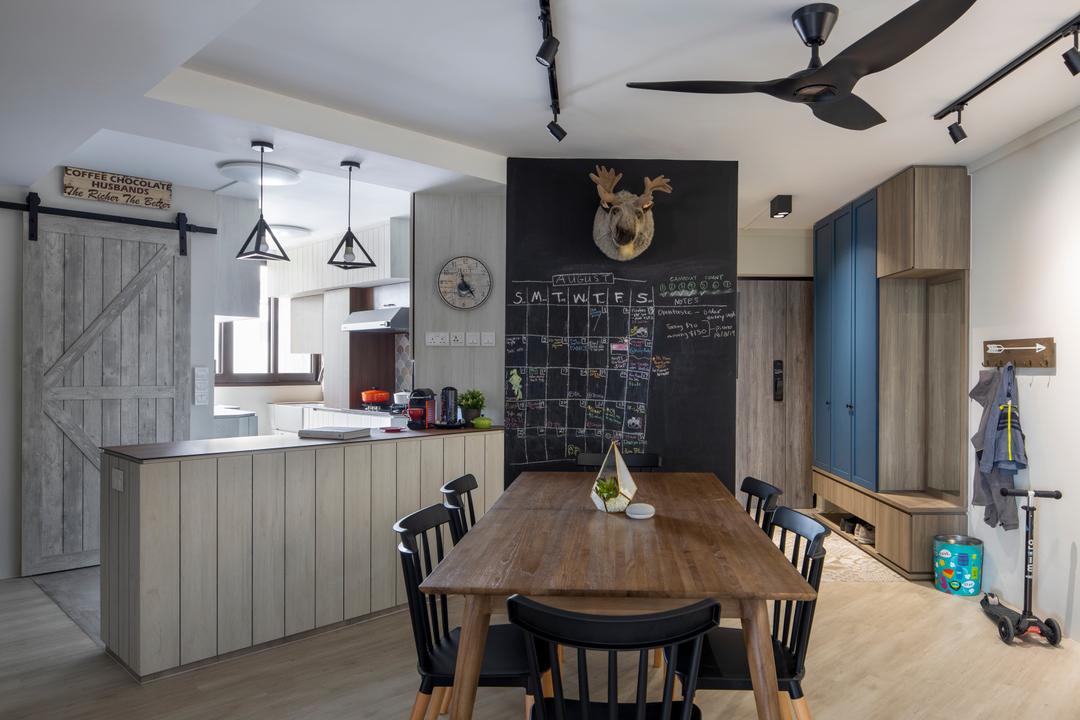 The couple had a barn door specially customised to match the country-look of their interiors. Behind it lies their common bathroom.

Mr. N: We had originally wanted granite countertops, but Mabel counter-proposed the use of KompacPlus. I was a little skeptical because it did not seem to be as durable. The only plus was that it matched the country-styled theme.

I did some research and was proven wrong, so I went ahead with her decision [laughs]. 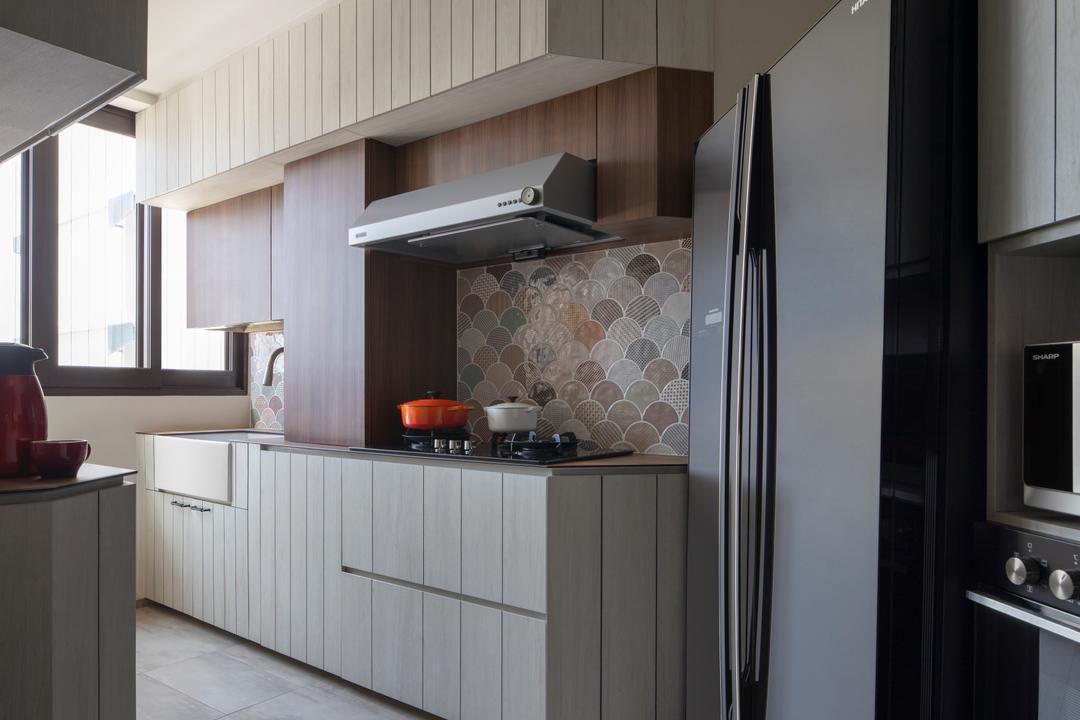 The cabinets saw an update as well. Aside from the panel detailing, we have lattice-designed glass doors on some of them. It's very reminiscent of those farmhouse kitchens. A subway tile backsplash would normally complement such a classic look, but it felt a little dull. Mabel suggested that we use these fish scale ones instead. And it turned out to be an awesome recommendation, becoming a key highlight in the kitchen. 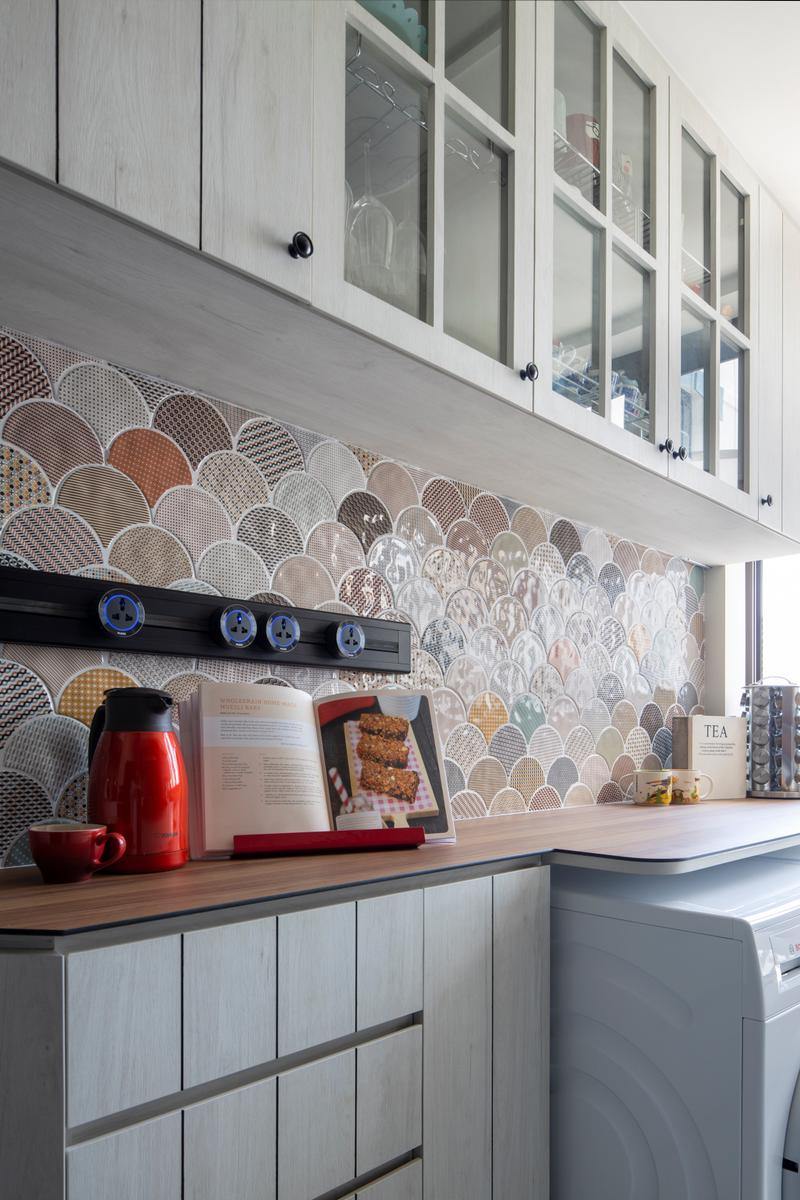 In place of a service yard, the family created a niche for their washing machine. This also provided them with additional countertop space.

I brought back some appliances back from America. But because the voltage is different, I had to use a transformer to avoid blowing up the appliances. The transformer is pretty big and heavy, so frequent handling would be undesirable. Mabel configured the kitchen to conceal it and hidden the wiring to make the US power socket easily accessible, just above the extended counter. 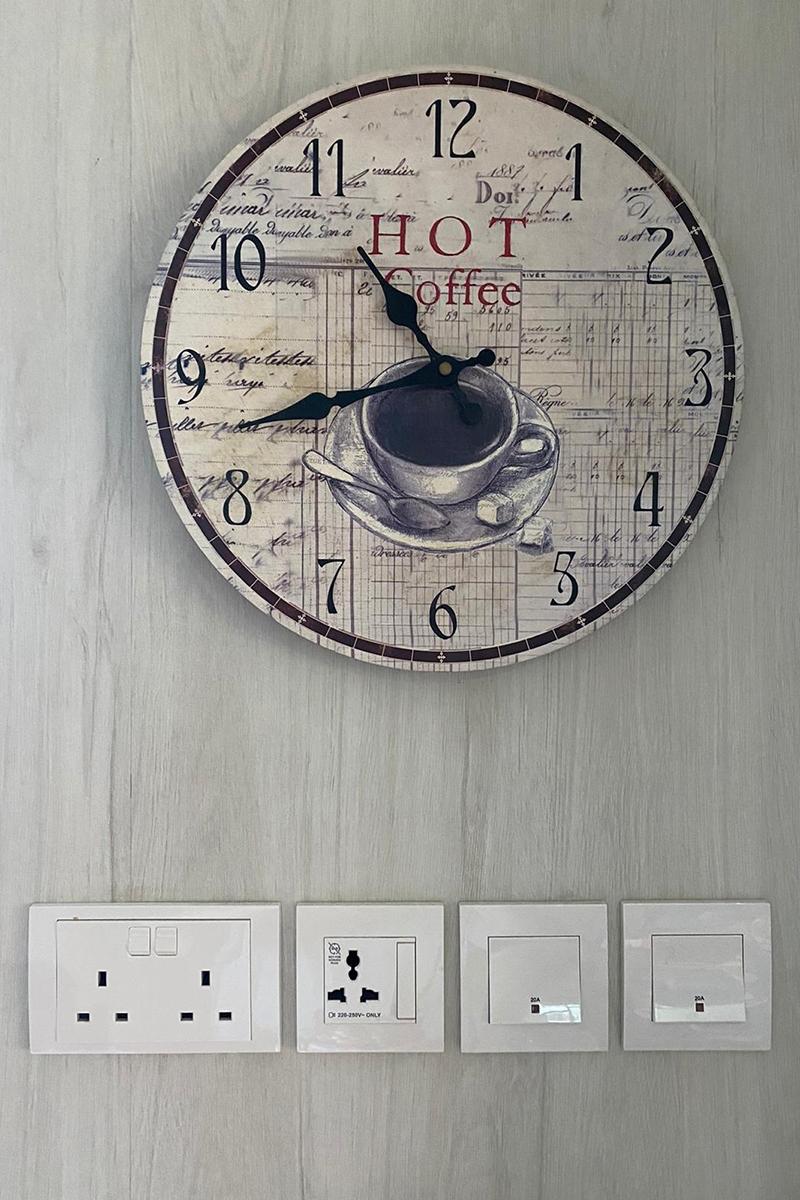 On changes made to the children’s room

Mrs. N: I stumbled upon this idea of a dollhouse while surfing Pinterest. I asked Mabel if she would be able to replicate the design with a few tweaks. The original design had a velvet backing within the cut-out, but because Singapore is so humid, I thought that it might encourage mould growth. 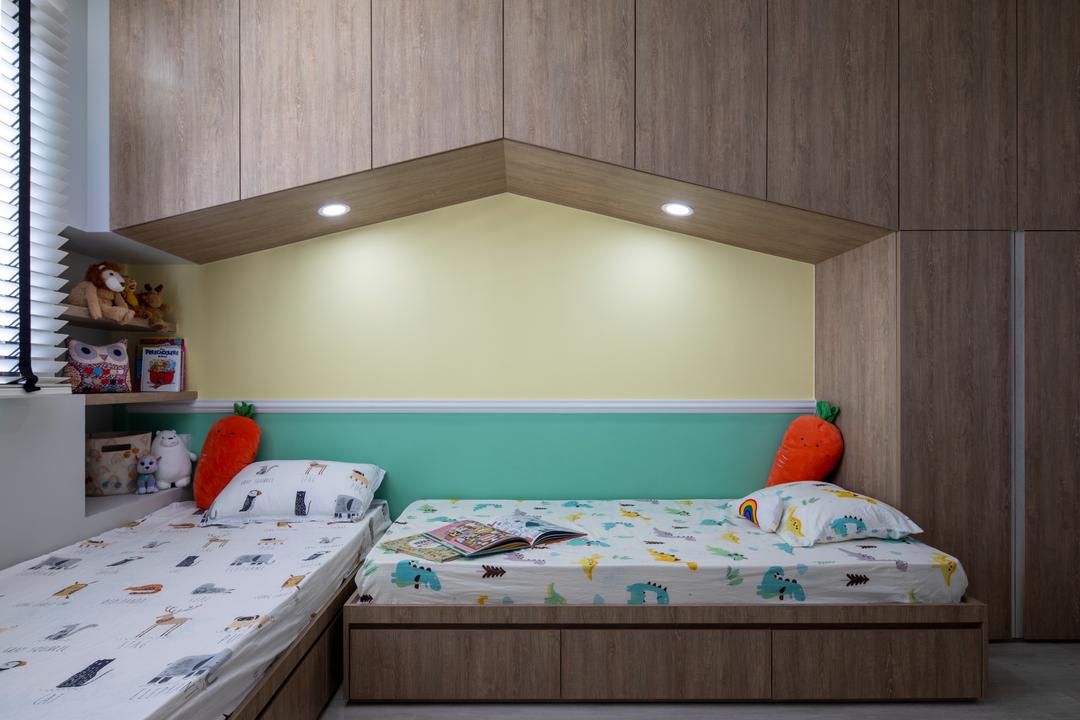 “Our son and daughter are currently staying in the room together,” shares Mrs. Ng. “So I wanted a design that’s more timeless, without it being too masculine or too feminine. That way, when our son grows up and gets his own room, our daughter can still call the space her own.”

We swapped out the velvet backing for paint, which we felt was a lot more versatile, and much easier to maintain. We like the fact that Mabel paid attention to details and she suggested the use of a wood trimming to divide the two paint colours.

Mr. N: As mentioned earlier, storage was a major consideration. Apart from the new storeroom and the drawers under our children’s beds, Mabel built us a raised platform with storage compartments in the master bedroom. That’s where we store items that do not require frequent access, such as our winter clothes. 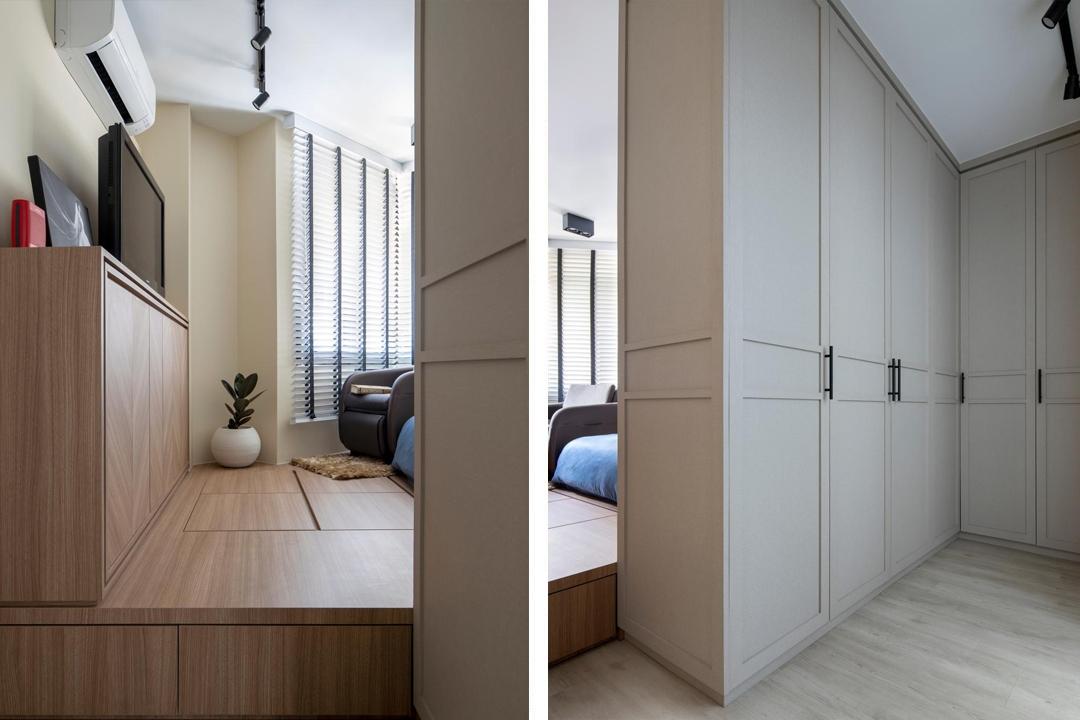 The couple also provided Mabel with a list of items that they wanted to include in their bedroom. This enabled the raised platform to be reinforced to withstand the added weight of the mid-sized massage chair.

We also built in an L-shaped wardrobe which both created a walk-in wardrobe, and gave our sleeping area some privacy. We relocated the entrance to the room, so that the entire room will be not be in view the moment one steps in.

On changes made to the bathrooms

Mrs. N: The common bathroom is fashioned after the country-style interiors. And that is all done by Mabel. The only contribution we made was the mirror.

The antique mirror is from the US, and there’s a story behind its purchase. When we were renovating, we got hooked onto a reality series called Fixer Upper. The couple hosting the show has a furniture/home décor brand that’s sold at Target and other retail stores. We took a photo of that, sent it to Mabel and that’s how the whole design was born. 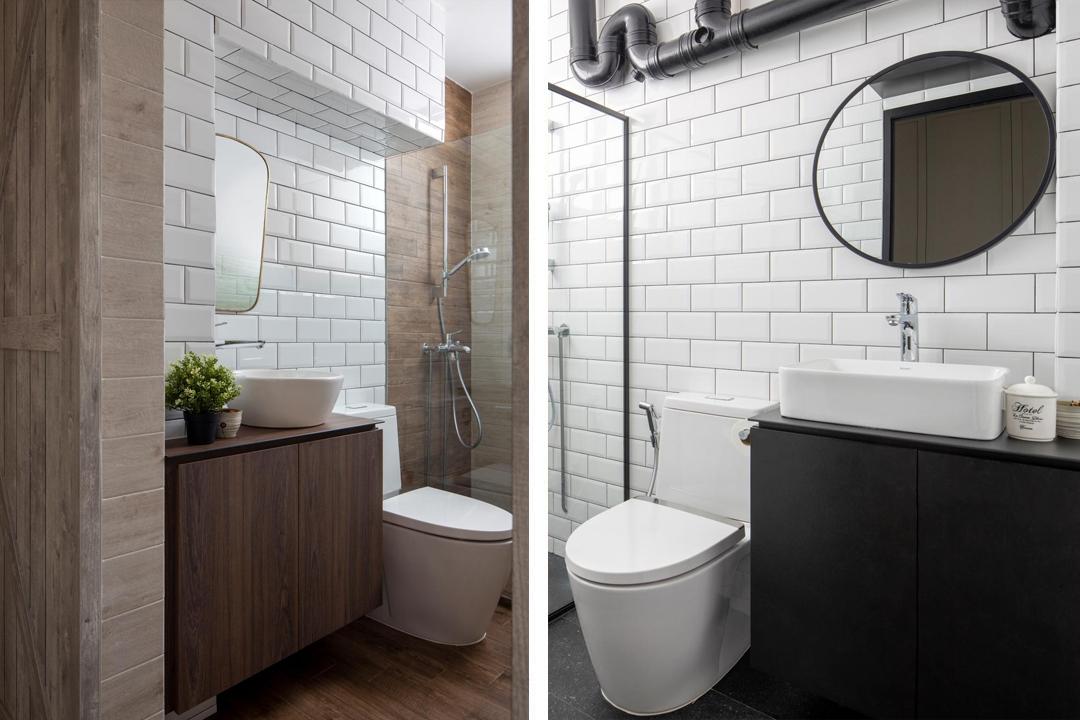 Inside the common bathroom (left) and the en suite (right).

Meanwhile, our en suite sports a more classic look. I want this to be our long-term home, so whatever we picked out should last a long time. This way, we wouldn’t be forced to update it if the trend dies!

On working with Prozfile Design

Mrs. N: Seeing that we were overseas for the most part, Qanvast made the process easier for us. My husband did have some reservations with using a renovation platform [laughs] but we’re glad to say that most of our worries were unfounded.

We submitted a request for quote and five interior designers were suggested based on our preferred style. The designers contacted us via WhatsApp and sent us sample images based on our details and requirements. Although Mabel was the last to get back to us, we felt that her design stood out the most. I could tell that she took the time to revise her designs to better fit our requirements – she took the time to revise the colour combinations for the kids’ room and rendered no less than 30 different 3D drawings before we settled on the final choice. I guess there’s some truth to “slow and steady wins the race” after all [laughs]. 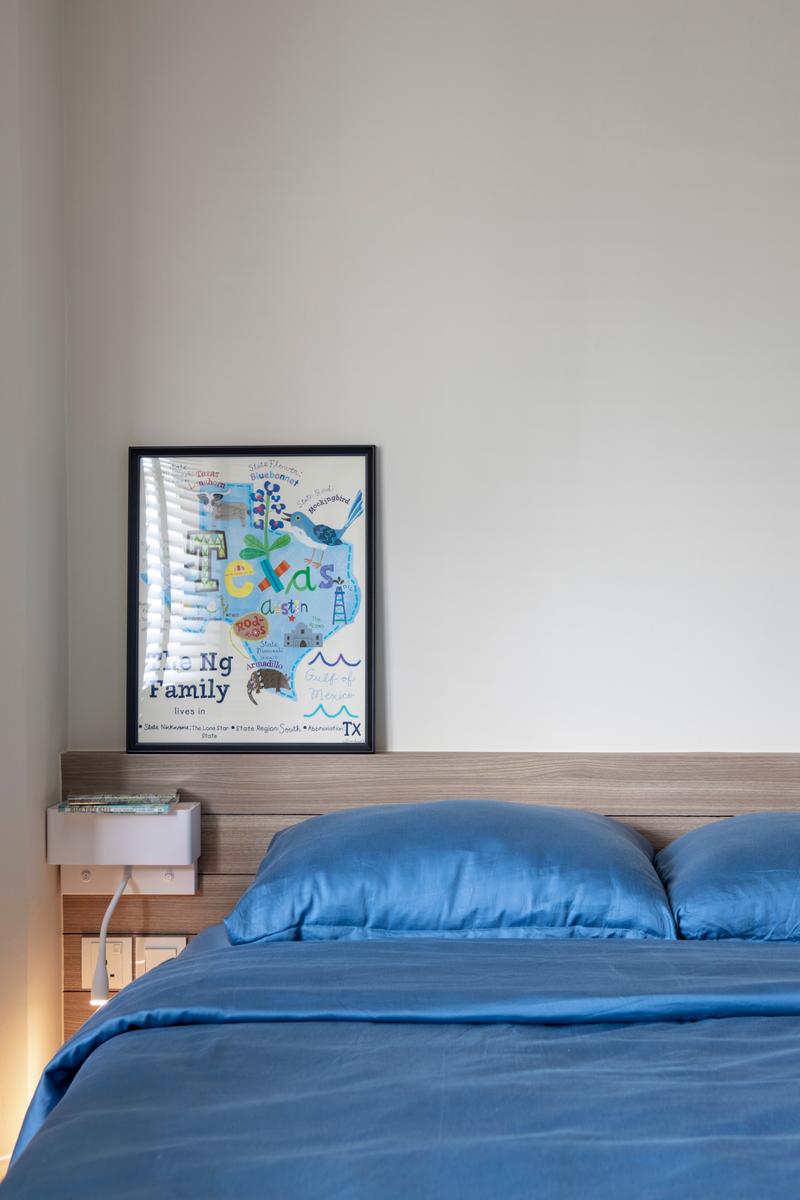 Inside the master bedroom.

From our personal experience, we will definitely applaud her work ethic and thoughtfulness. Other than offering great designs and making revisions with no complaints, she was also conscious that we are in different timezones. She scheduled video calls either early in the morning or late in the night, but not at unearthly hours like 2 or 3am. Shopping for materials, laminates, tiles and furniture was definitely easier with her around too. Even though there were some misses (caused by photo and lighting quality), she definitely made remote renovation journey possible. So we’re thankful for the fact that we didn’t need to fly back to check on everything. I’d say that our renovation was based solely on trust.

She went beyond our expectations and remained responsible till the end (even after completion of the renovation). She rectified issues quickly, and made it really painless for us. We were able to move in immediately once we flew back to Singapore, which was the biggest plus! 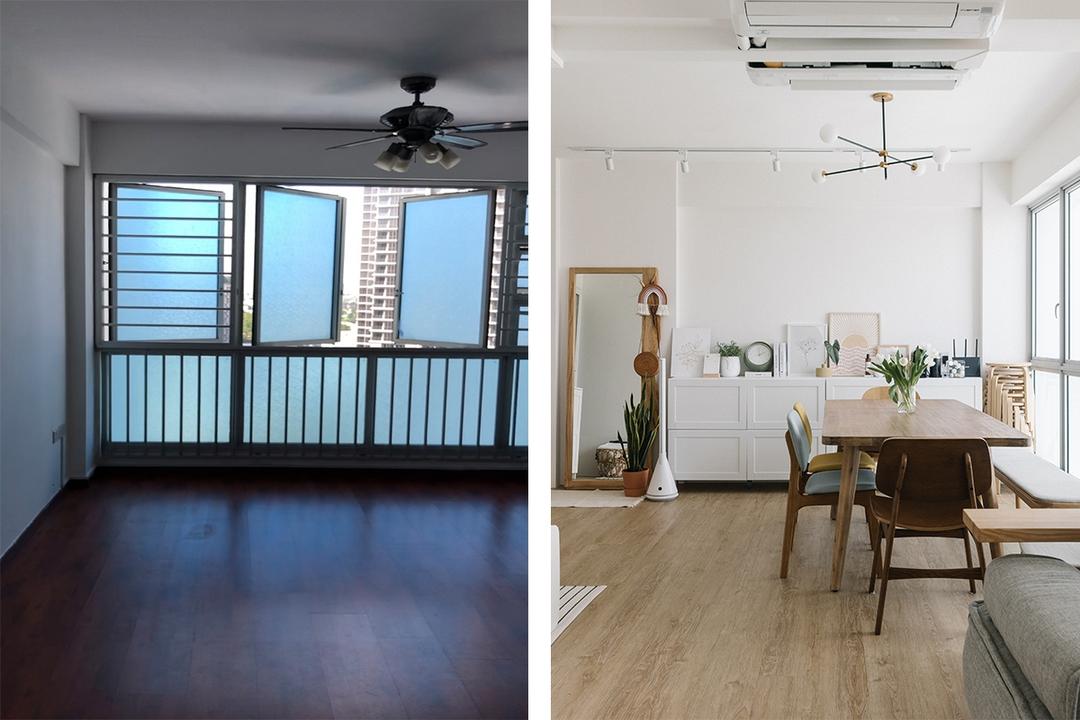 RENOVATION JOURNEY
UX Design Played a Big Role in This Clementi Flat’s Makeover
Optimum functionality lies at the heart of this UX designer’s Clementi HDB home, which she designed on her own.

RENOVATION JOURNEY
It’s Compact, But This 3-Room BTO Flat is Totally Hotel-Like
At 72 square metres, this Circuit Road BTO flat is compact, but it’s also the perfect getaway for a couple (and their furry companion) in every way!

RENOVATION JOURNEY
This Dreamy Telok Blangah Home Isn’t Your Typical HDB Flat
Think all BTO flats are cookie-cutter? This 4-room home by 19EightyThree and its Memphis-inspired décor will blow away ALL of your preconceptions.
Preparing the next article…
Recommended for you