Proof that home renovations don’t have to be a splurge.

When it comes to renovating a home, most of us can’t help but think that it’s going to be a long and expensive affair; there’s just so much to be done (and paid for), from the flooring to the TV feature wall which is going to be the highlight of your living room. That said – your worries could be unfounded, given the right help and ideas. 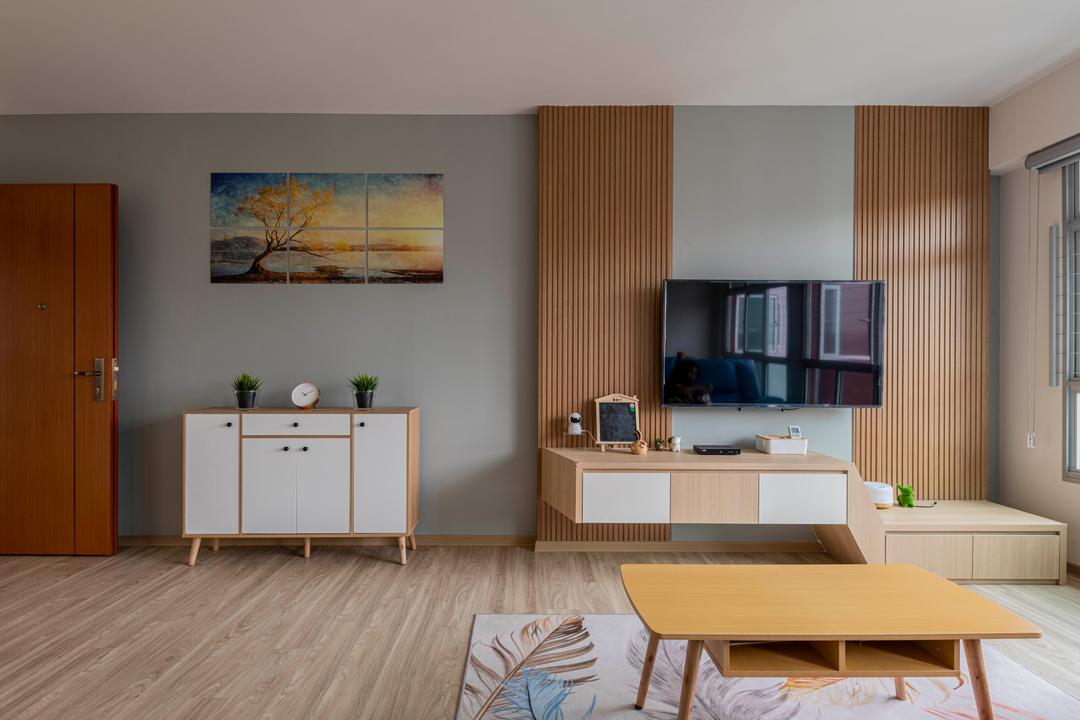 “There are ways to achieve more with less. That’s what me and my team believe in,” says Yang’s Inspiration designer Ivan Yang. And, as proof, look no further than this 5-room HDB home in Bukit Batok that was completed by them in just 4 weeks for $35,000 – which is below the average time and cost (7 weeks and $52,100, respectively) that it would usually take.

To find out all the secrets behind this quick and budget-friendly makeover, keep scrolling!

Ivan (I): The owners are in their thirties and they have a young child – that was taken into consideration when we came up with the initial layout and design proposal for the home. Looks-wise, the owners asked for a space that was mainly white-and-wood, but they also didn’t want it to feel too empty, which is why there are some colourful furnishings to inject some life. 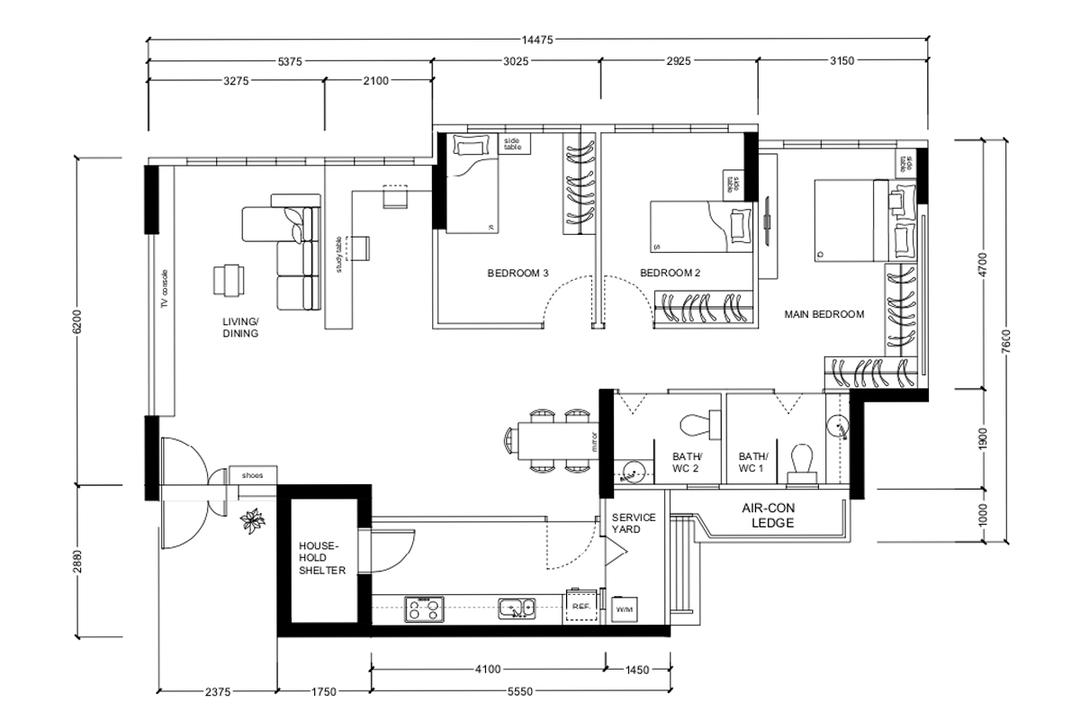 I: The biggest change to the living room was definitely the TV feature wall. We painted it grey as requested by the owners who were advised to have this colour in their home by their Feng Shui master.

It’s also probably the feature that we helped save the most money on. Instead of using carpentry, we created a partition wall to house the TV’s cables, which is about 3 to 4 times cheaper by my estimation. The timber strips were then added to the sides of the partition to give it a more eye-catching profile. 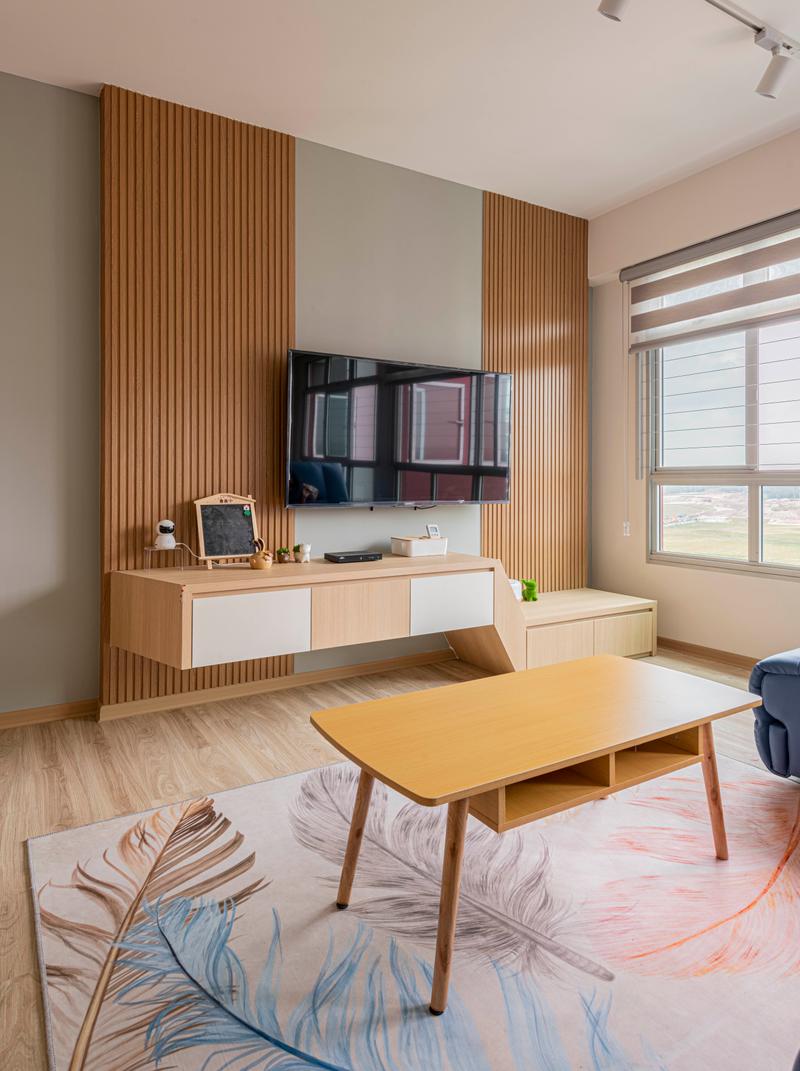 For the furnishings, they were mainly loose pieces bought online from Taobao as that would give the owners more leeway for their budget and also grant them the freedom to configure the space as they please in the future. 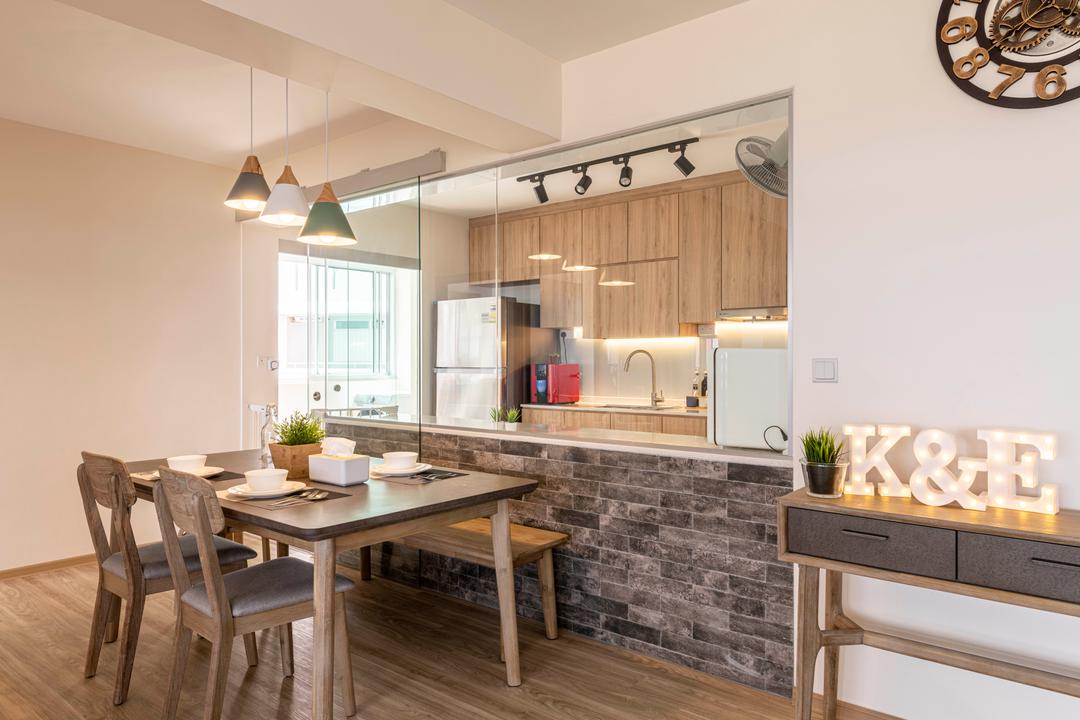 The kitchen came with an open-concept design originally, but for safety and cleanliness reasons, we were asked to install glass panels that still allow light to enter freely into the dining area.

Most people would leave the front of their kitchen counters empty, however as the owners really like the look of raw brick, we installed tile lookalikes that are lighter but still retain an authentic texture. 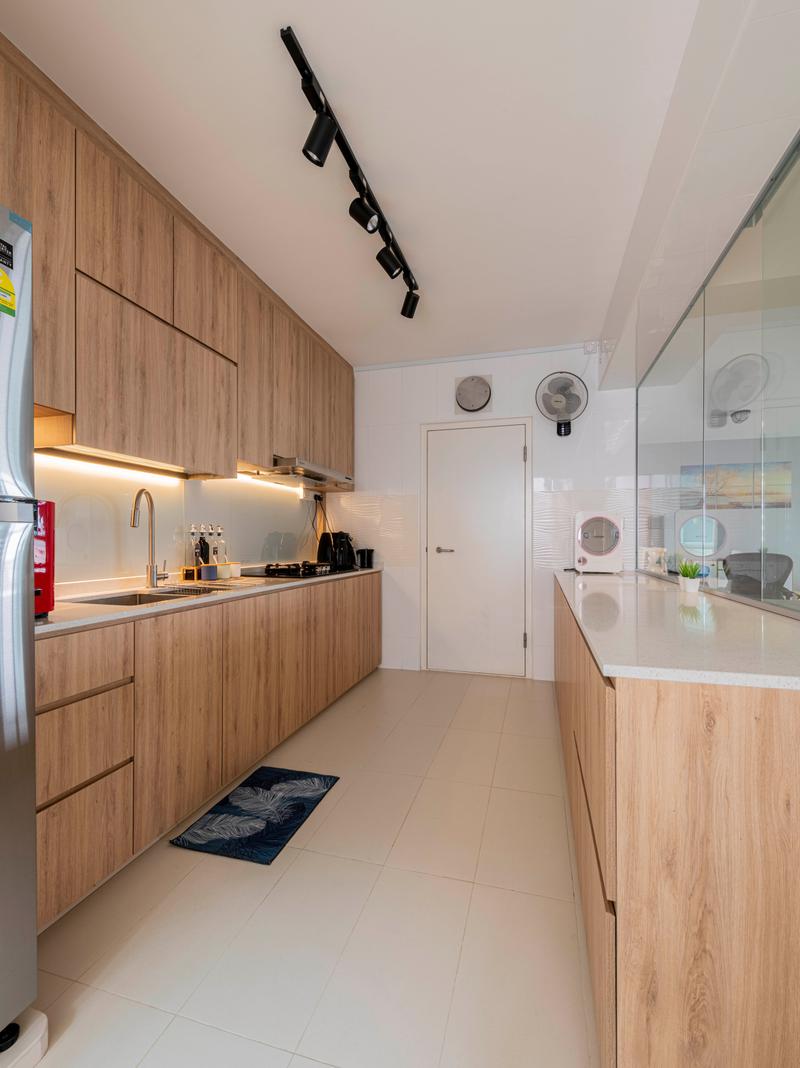 On the inside, the kitchen is fairly standard; there are new cabinets, fittings, and quartz countertops installed as part of a galley layout. The service yard, on the other hand, was a bit more special, we hacked the walls on both sides of the original entrance and replaced them with glass panels to make the transition from the kitchen almost seamless. 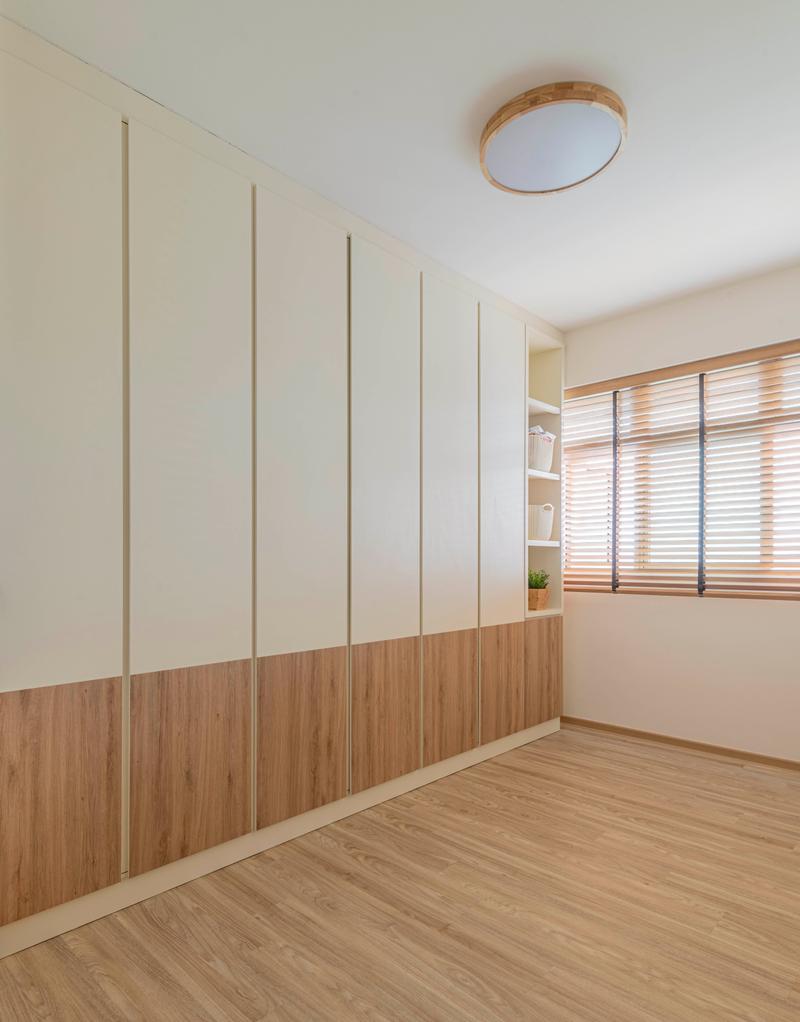 One of the bedrooms was transformed into a play area for the owners’ child, and also where most of their clothes and belongings are kept, which is why one of the walls is taken up by a full-length wardrobe. 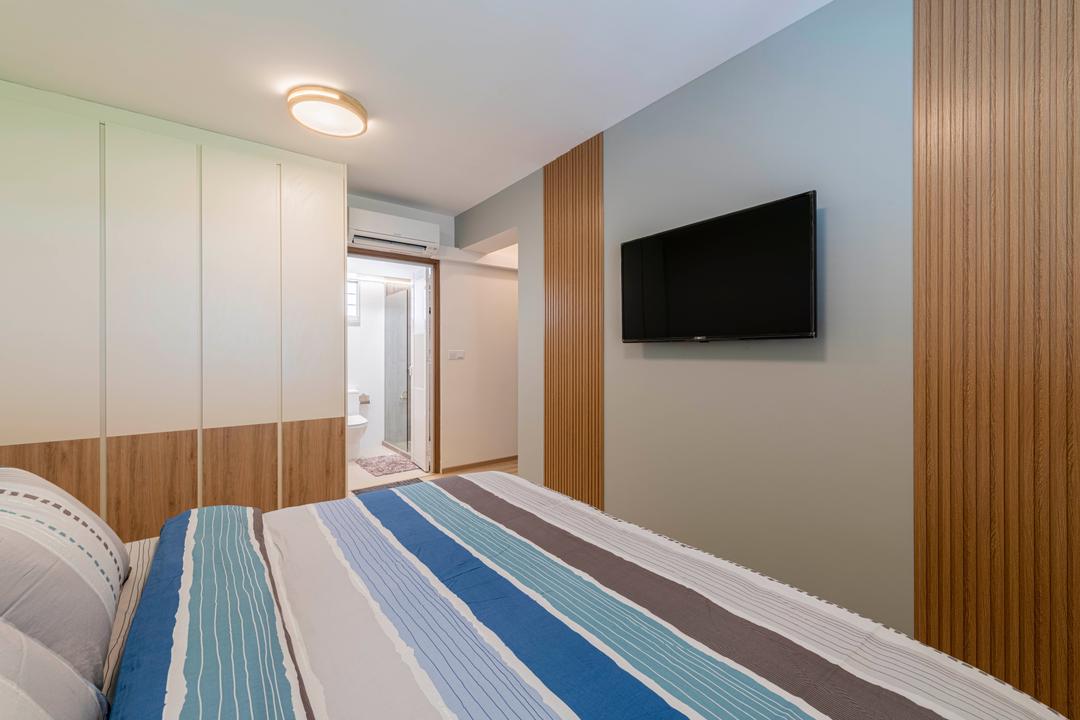 Aside from the TV wall that we used leftover wood strips from the living room to accent as a cost-saving measure, the master bedroom’s wardrobe was also a new addition. Although it’s only used to store more frequently-used belongings and/or clothing, it’s still quite convenient and is just the right size for the bedroom. 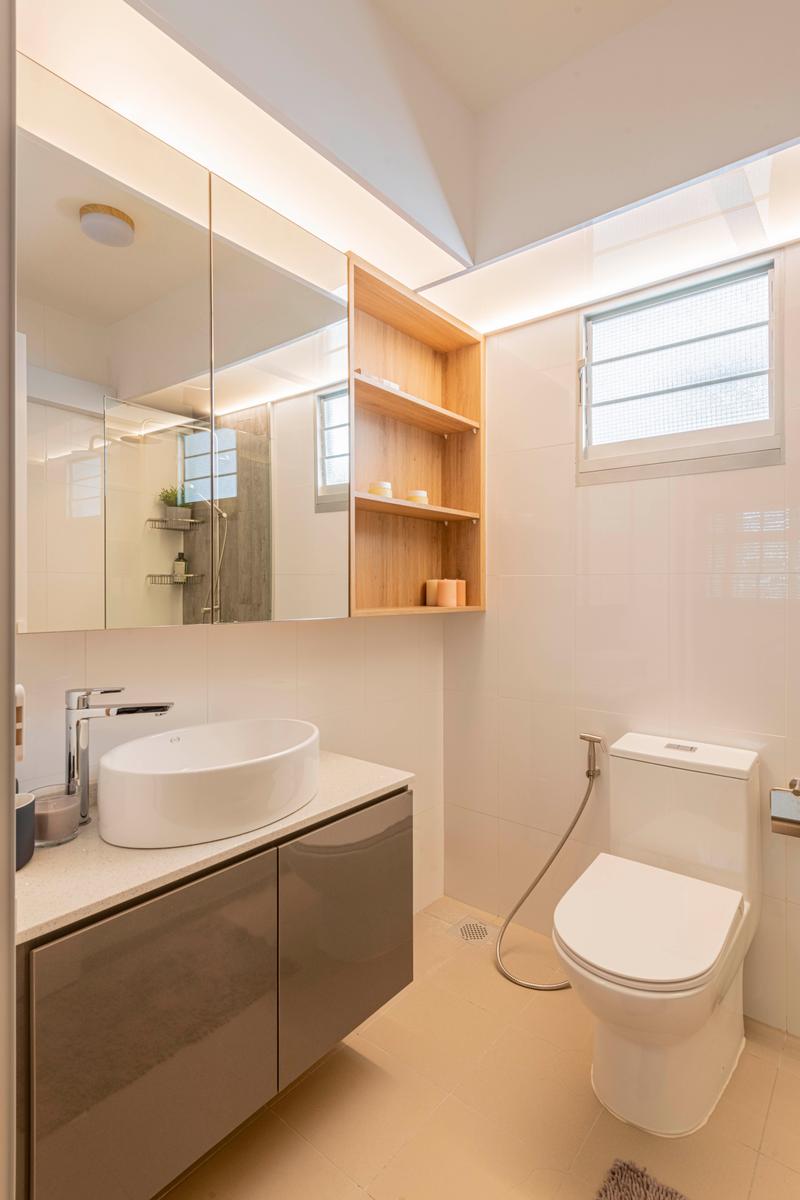 In order to make the bathroom fittings more long-lasting, we suspended the cabinets to minimise contact with water. We also outfitted the built-ins with stainless steel hinges to combat the humid environment. Finally, to complement the rustic look in the outside areas, we overlaid the shower area with wood-look tiles.

I: Overall, I would say that this was a straightforward renovation because we were working on a brand-new BTO flat and we didn’t face any of the issues that an older resale home would have. Everything went so smoothly that we actually finished the renovation two weeks in advance, which allowed the homeowners to move in earlier. 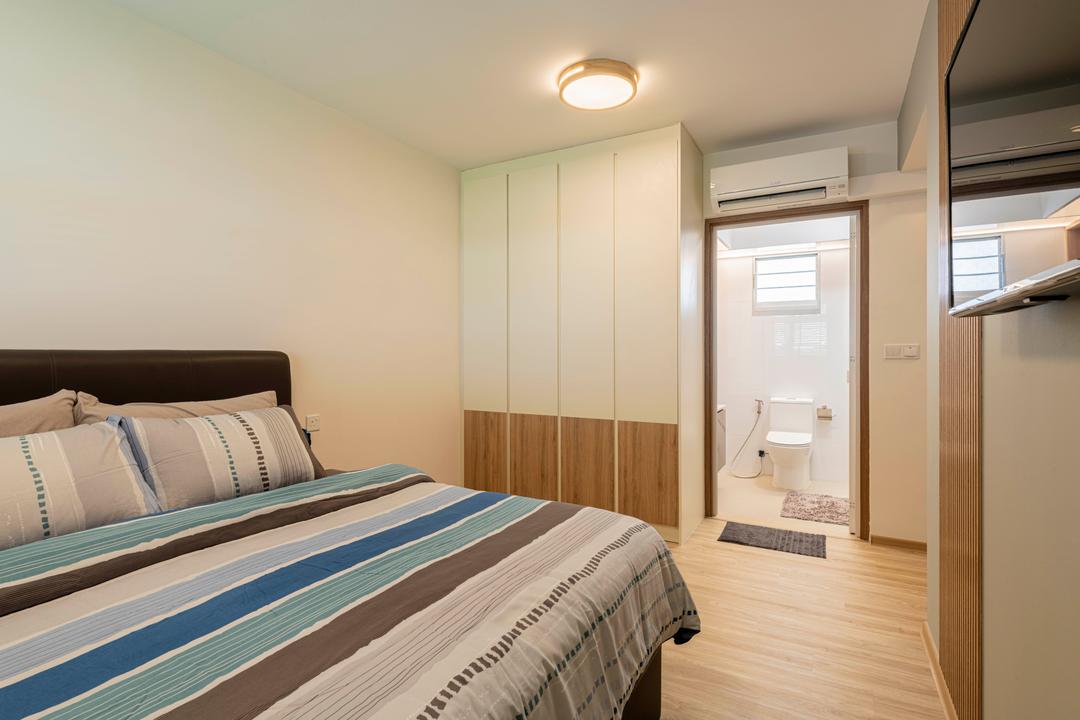 I: Because the owners are happy, I am happy with the results too. I would also like to say that this project was a success because it’s proof of our motto – that it’s possible to achieve maximum aesthetic impact with minimum cost. 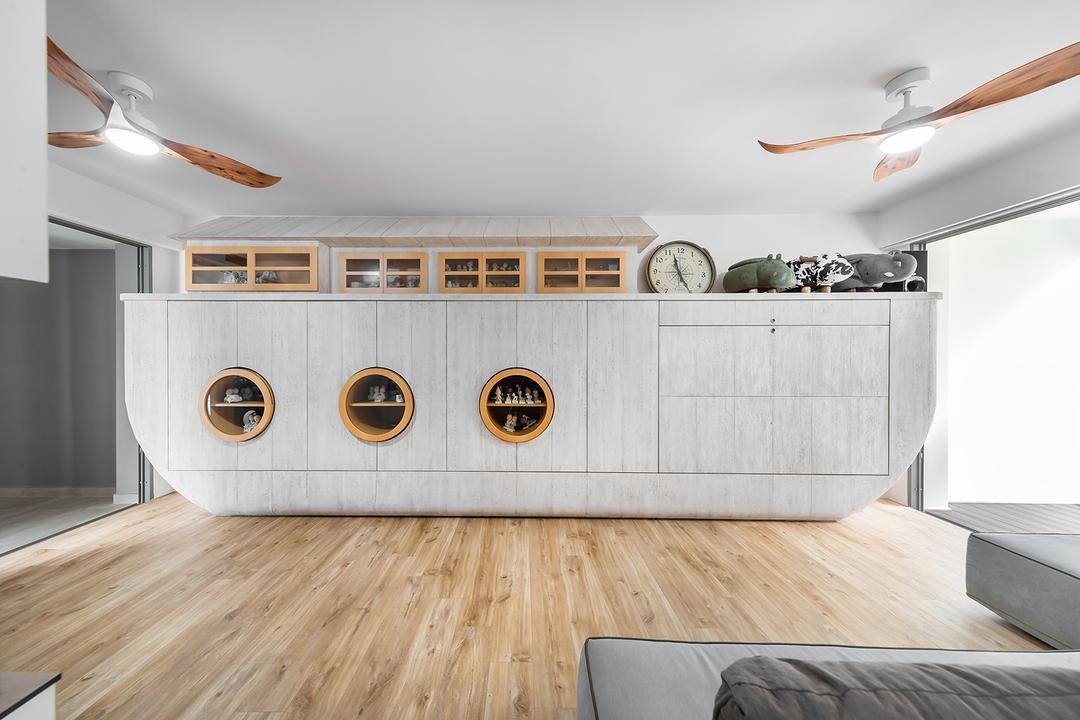 RENOVATION JOURNEY
A Family's 3+1 EC Home with a Unique Noah's Ark-Like Display
This 3+1 executive condo takes inspiration from an unlikely source – the Noah’s Ark. The result? A unique home that’s decked out in eye-catching nautical elements. Quick, dive in to find out how they achieved it with the help of Noble Interior Design! 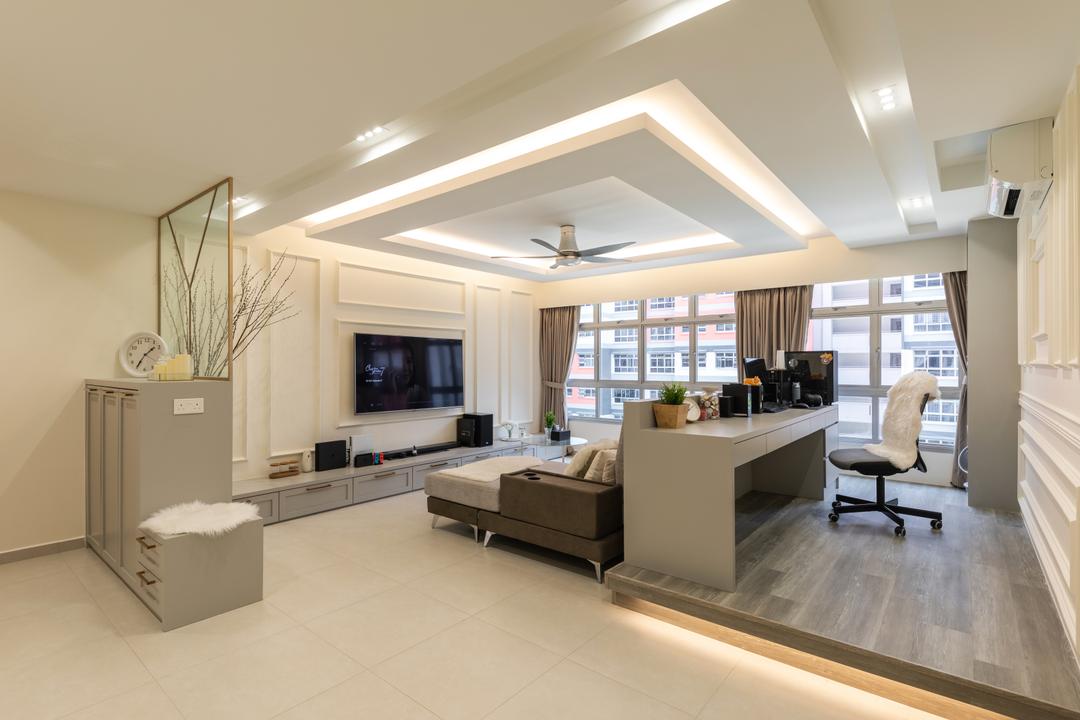 RENOVATION JOURNEY
This 5-Room HDB Shows the Importance of Texture in Design
With the help of Yang’s Inspiration, this couple’s HDB in Bukit Batok is filled to the brim with textures, creating a home that’s visually arresting. 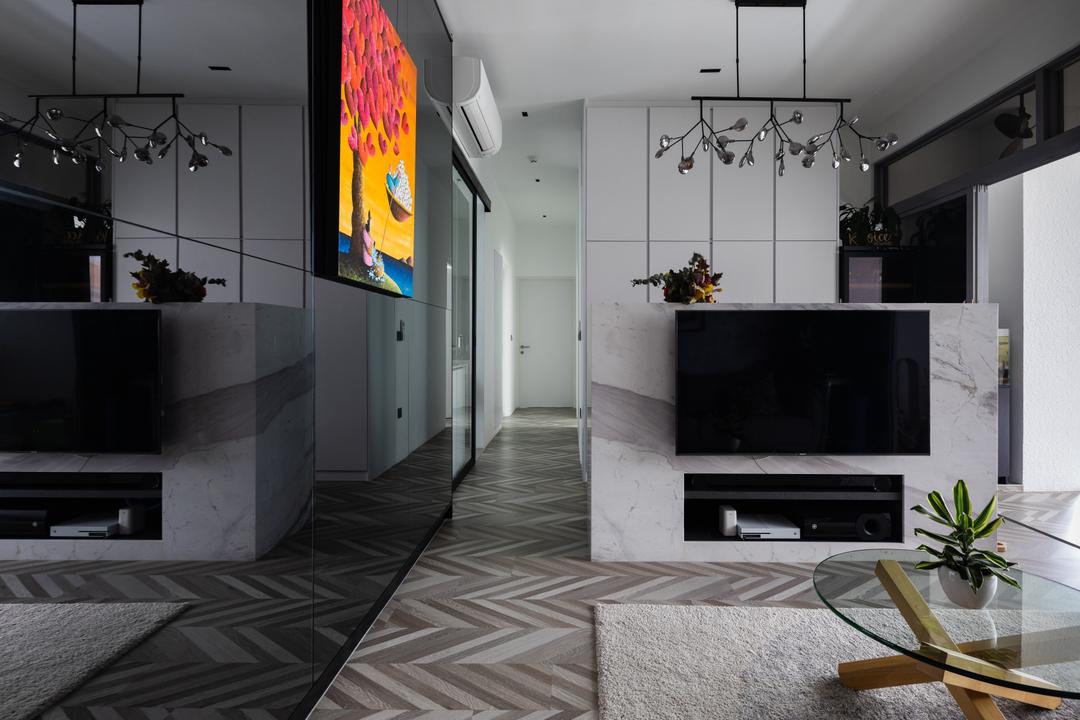 RENOVATION JOURNEY
This Toa Payoh Home Was Made ‘Bigger’ with a Simple Trick
Not letting space constraints get in the way of achieving a comfortable home, interior design firm Minutiae found ways to open up the insides of a family’s Toa Payoh HDB flat.
Preparing the next article…
Recommended for you 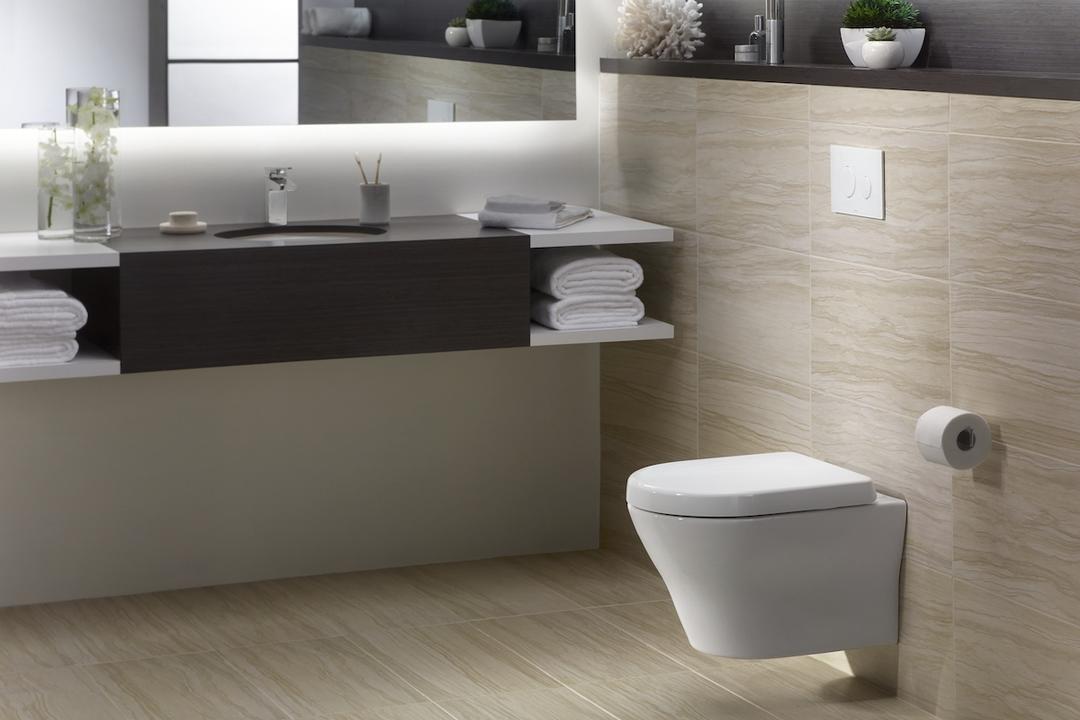 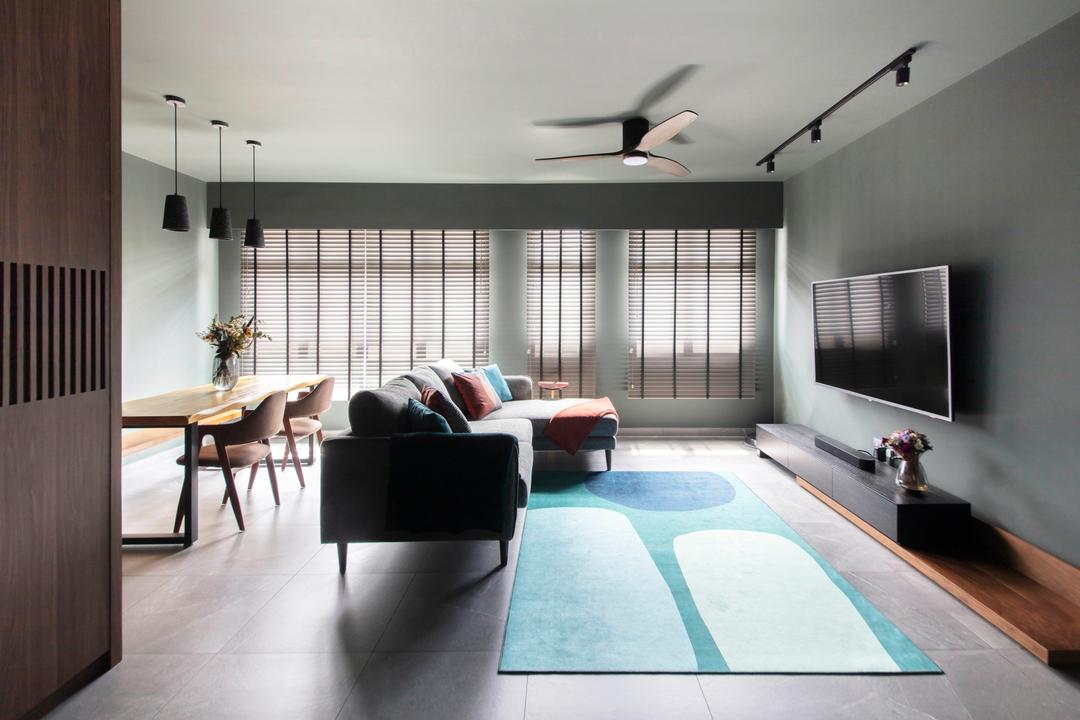