This ‘NYC Loft’ is Actually an Old Condominium in Singapore

Despite how it looks, this Woodlands penthouse really isn’t in the US.

Soaring ceiling? Check. Double-height windows? Check. Authentic industrial vibes? Check. With all of these features in place, it’s hard for anyone not to see the similarities between this stylish condominium penthouse in Woodlands and a handsome loft apartment in the Big Apple. 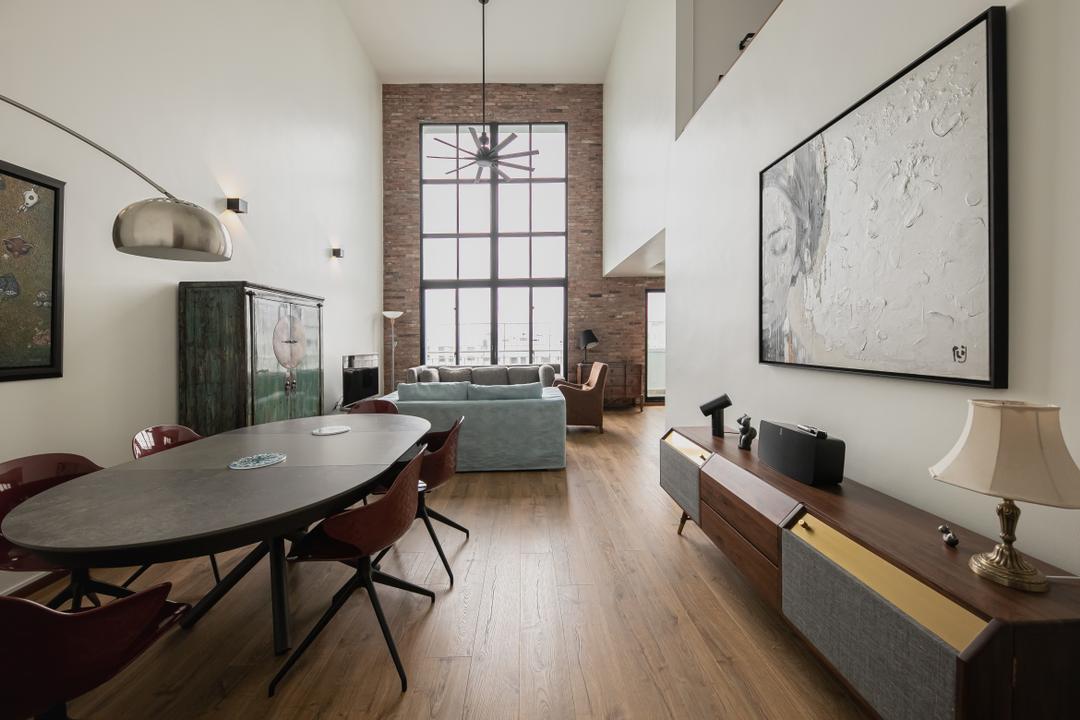 Such was the case for Space Atelier interior designer Lesley, who was tasked with refurbishing the house last year, as well as its owners, a middle-aged couple who had been living there since the early 2000s.

“The steel-framed windows were already there before the renovation and so was the 5.8 metre tall ceiling,” says Lesley. “Because of these features, the idea of creating an NYC loft-inspired look gradually formed in our minds, both the homeowners’ and mine, as our discussions went along.” 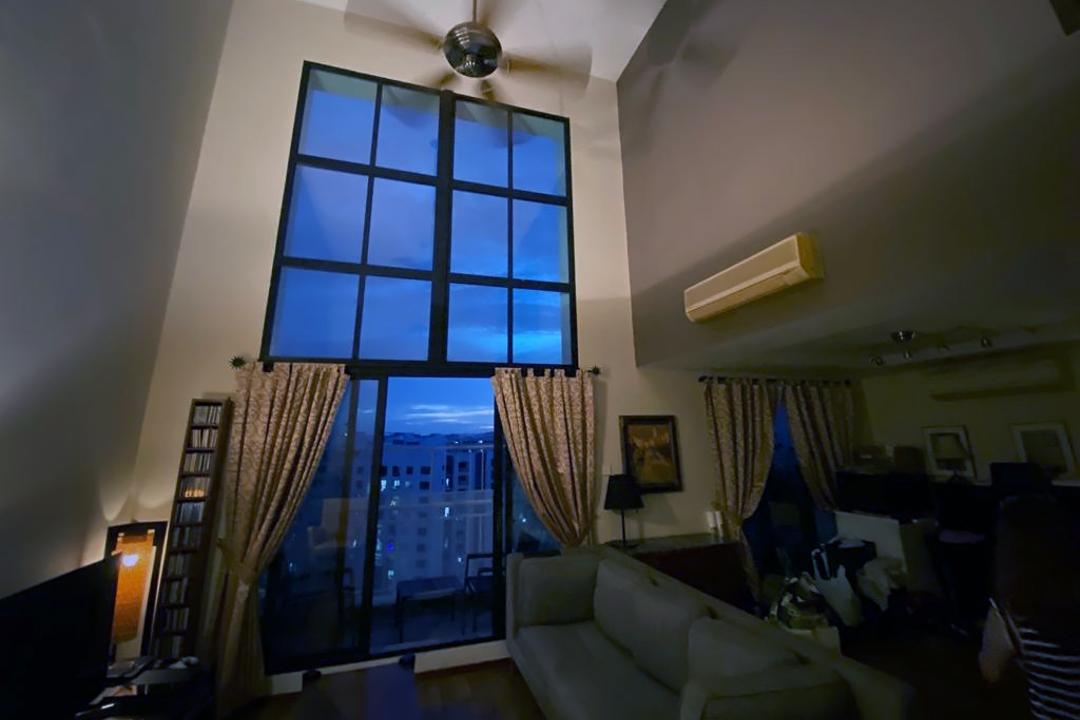 The living area prior to the renovation. 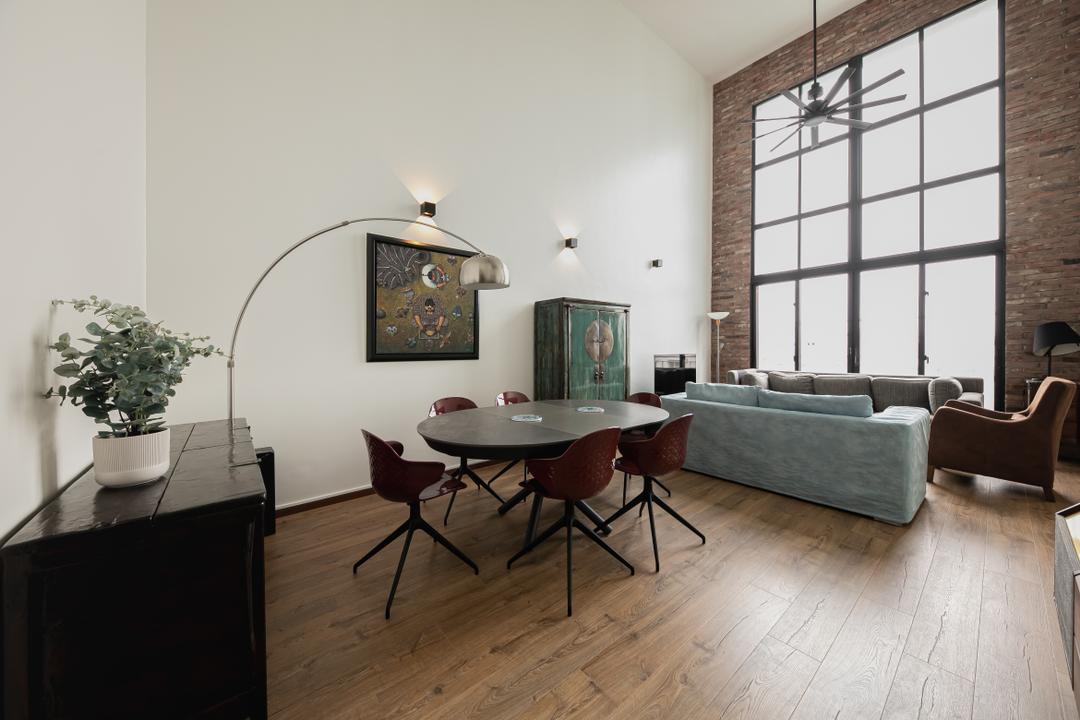 As part of the revamp, the living room was decorated with an authentic exposed brick cladding that brings an instant industrial vibe to the space.

However, while the image change from dated 20-year-old penthouse to ‘Manhattan loft’ was definitely deserved, what the home really needed was a gut renovation. “Due to its age, a total refresh and upgrade was necessary [for the house],” says Lesley. “Although the owners did keep it maintained, they had lived here for almost two decades and some spaces, especially the bathroom and kitchen, were starting to show their age.” 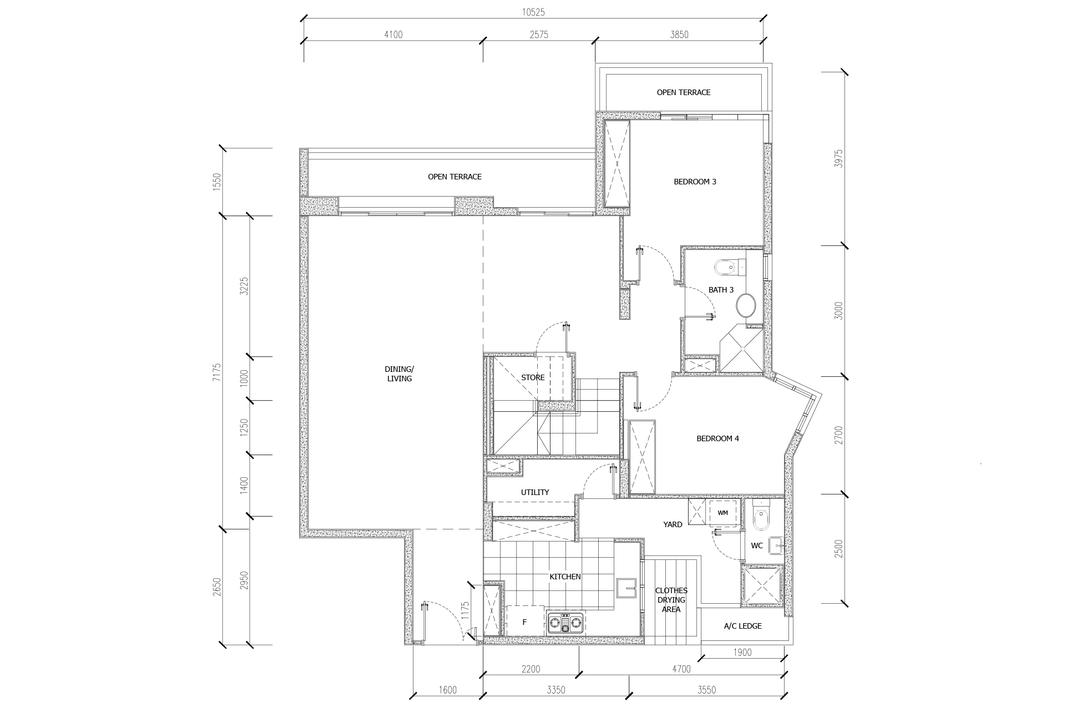 “In fact, at one point, the owners considered going for a non-industrial look for their home, such as having a white brick wall instead for a more Nordic vibe. But regardless of that, the main purpose of this makeover was always to create newer, more practical features that would enhance the home’s liveability.” 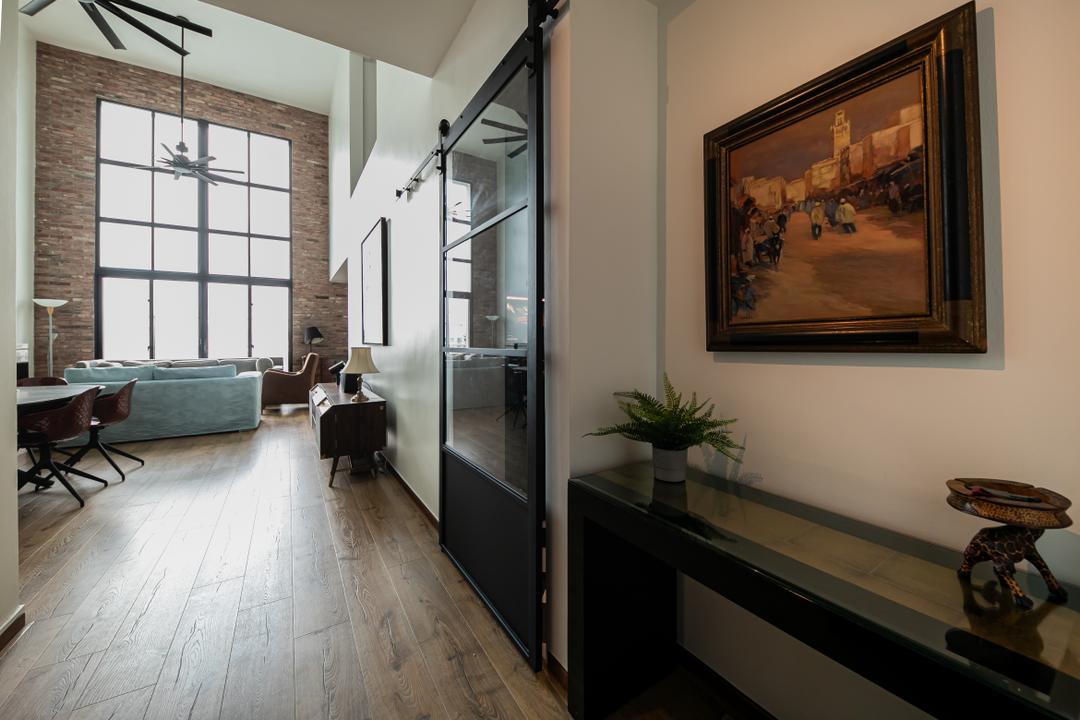 Paired with wood elements, such as a rustic laminate floor and retro furniture, the kitchen’s new steel frame sliding door similarly serves as an expression of the industrial look. 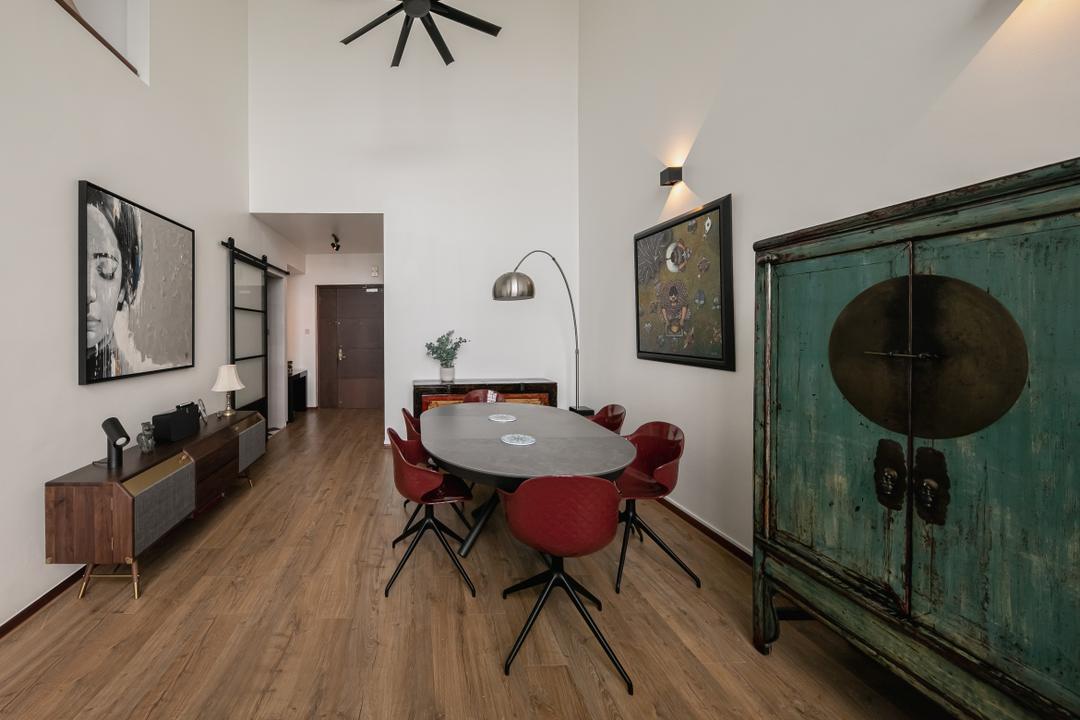 To that end, the property was revamped from head-to-toe, starting with the living room’s ceiling and walls. “Although there’s plenty of natural light in the day, the inside [of the house] can get quite dark at night since the walls were painted in grey previously,” Lesley explains.

“Now that they’re painted white, the living room has a brighter, more timeless look. We added new lights too. For example, a new wall sconce was installed for a total of three artificial light sources in the living room. Additionally, two of the existing sconces were shifted towards the sitting area to give it better illumination at night.” 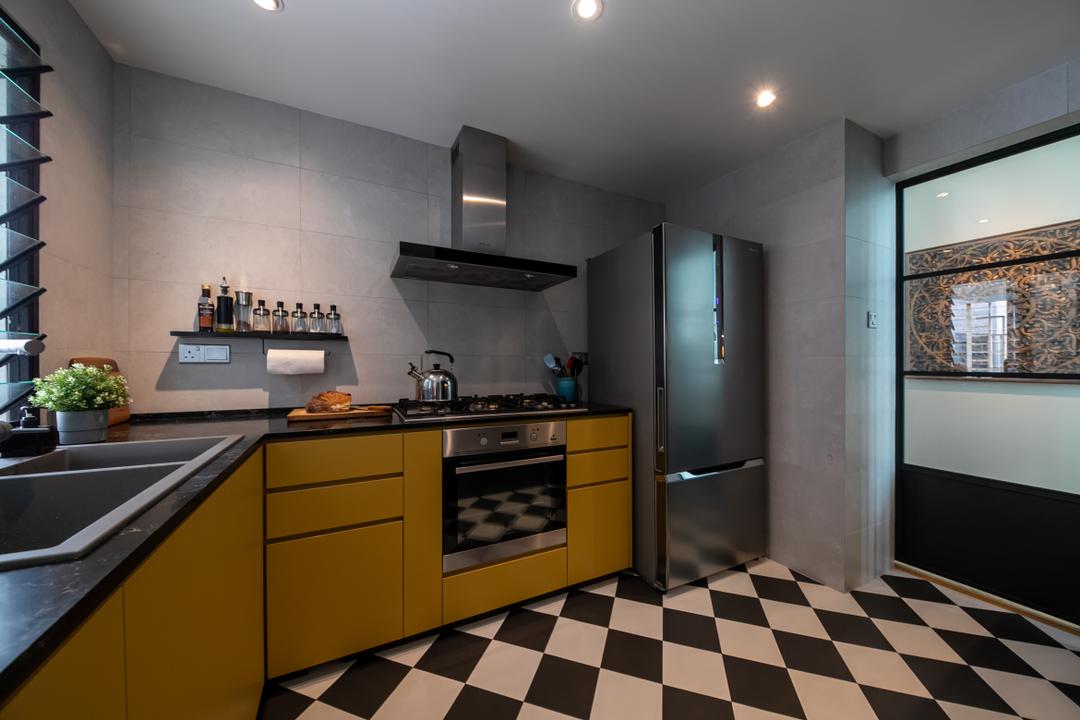 Functional adjustments were made to the kitchen and common bathroom’s designs as well, though, unlike the living room, these tweaks were part of larger-scale overhauls. “There were some minor leaks in the kitchen, specifically under the sink, and also one of the side counters had mould growing behind it,” says Lesley.

“We swapped those problematic fixtures out, along with all of the kitchen cabinets. Also, although we stuck to the original built-in layout, we optimised it by swapping some of the cabinet positions. Specifically, the top-hung cabinets above the stove were relocated to the side of the kitchen in order to create the impression of a larger space.” 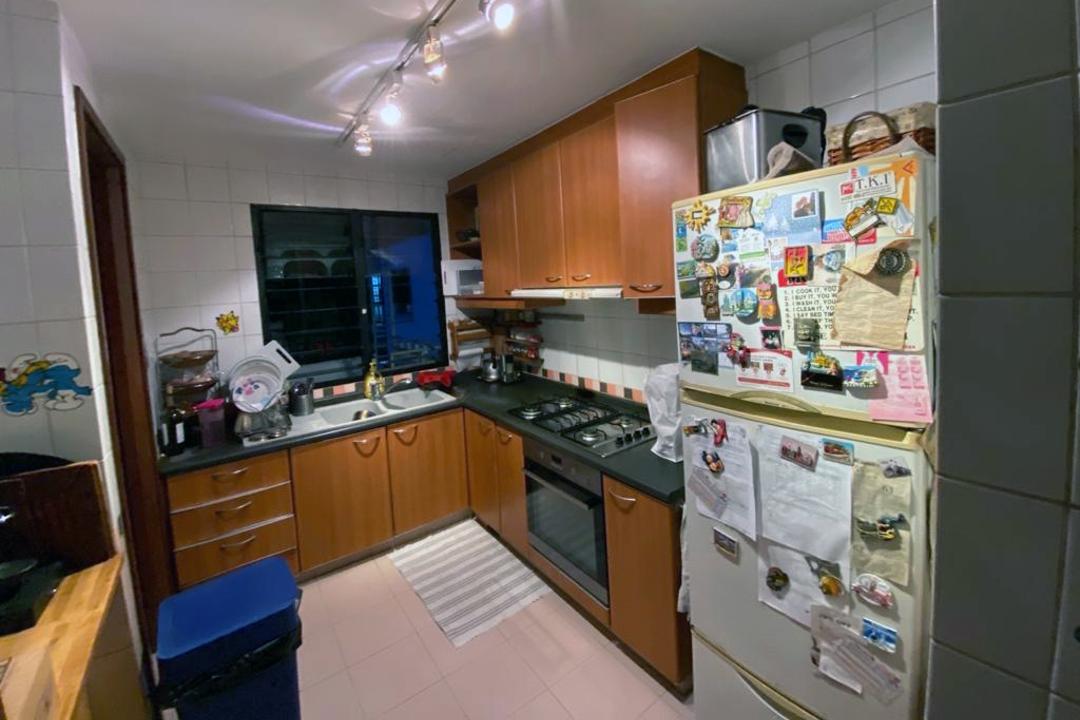 The kitchen prior to the renovation. 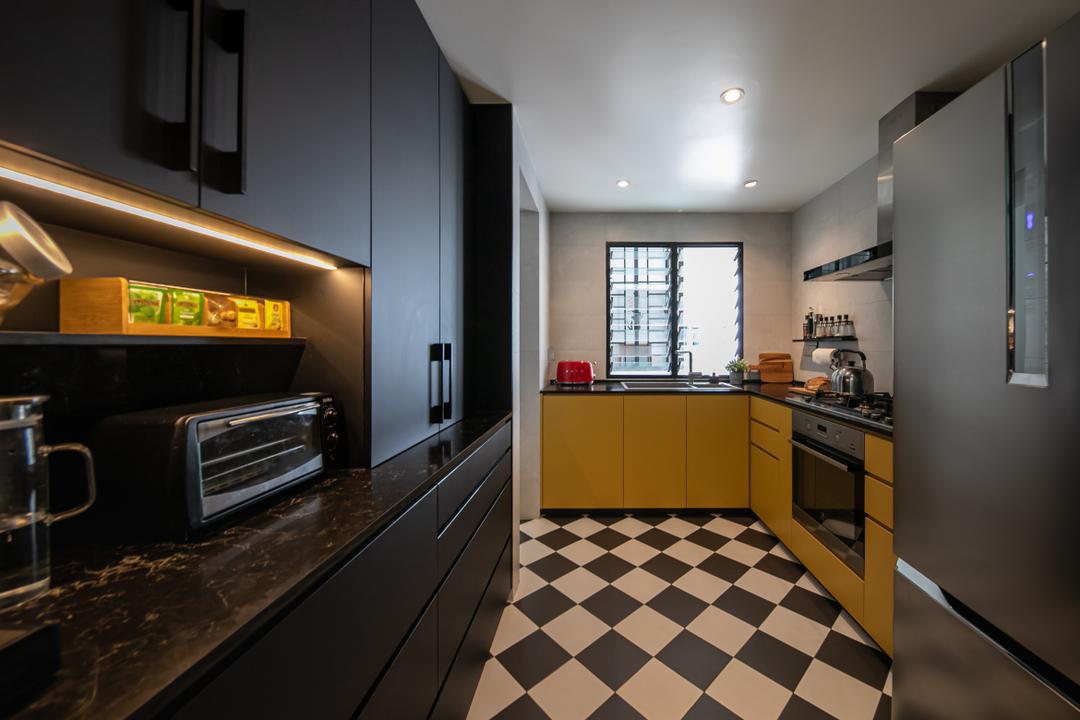 Likewise, for the common bathroom, the main priority was to optimise it with new fixtures that would serve as both practical and aesthetic improvements. “One of the biggest changes is definitely the new shower screen. The previous one had an old-looking design and there was a little bit of wall at the side for the door hinges. Removing it doesn’t really increase the size of the shower area, but it does make it look a little bigger and better,” says Lesley.

“Additionally, we replaced the existing vanity with a more practical one with drawers. Like the shower screen, the original vanity had a retro design – it had a drop-in sink with a circular front that protruded outwards, and there was no storage below it, which was a waste [of usable space].” 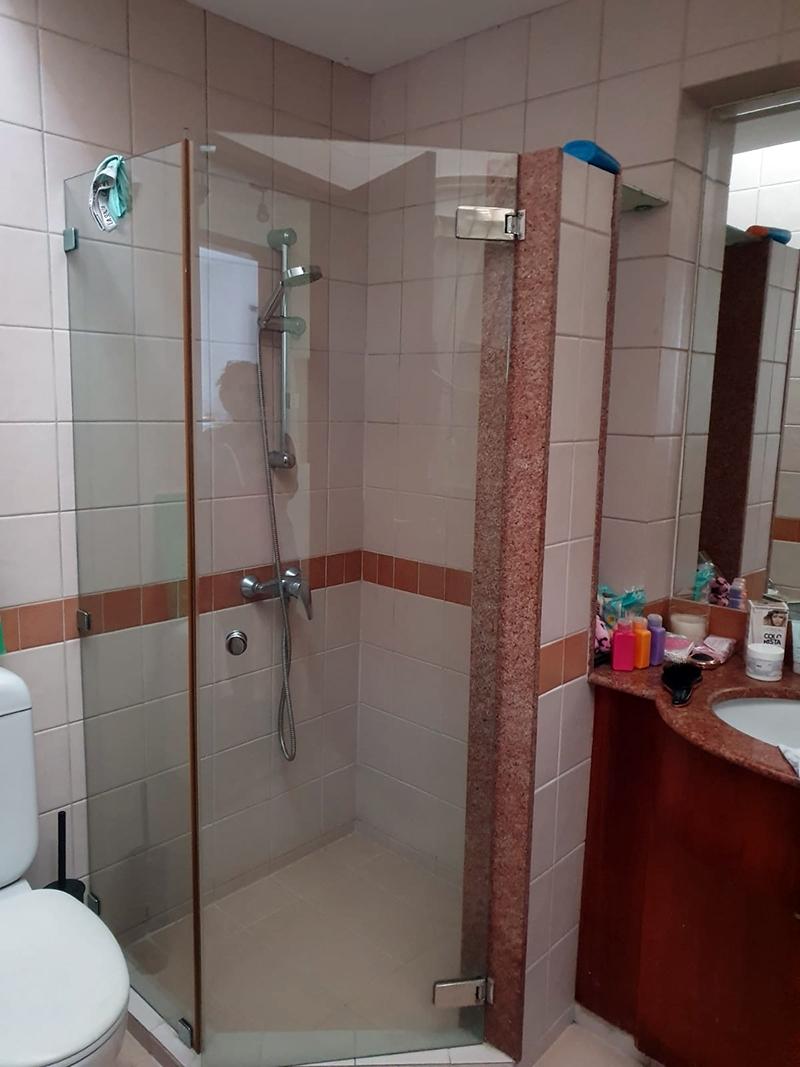 The common bathroom prior to the renovation. 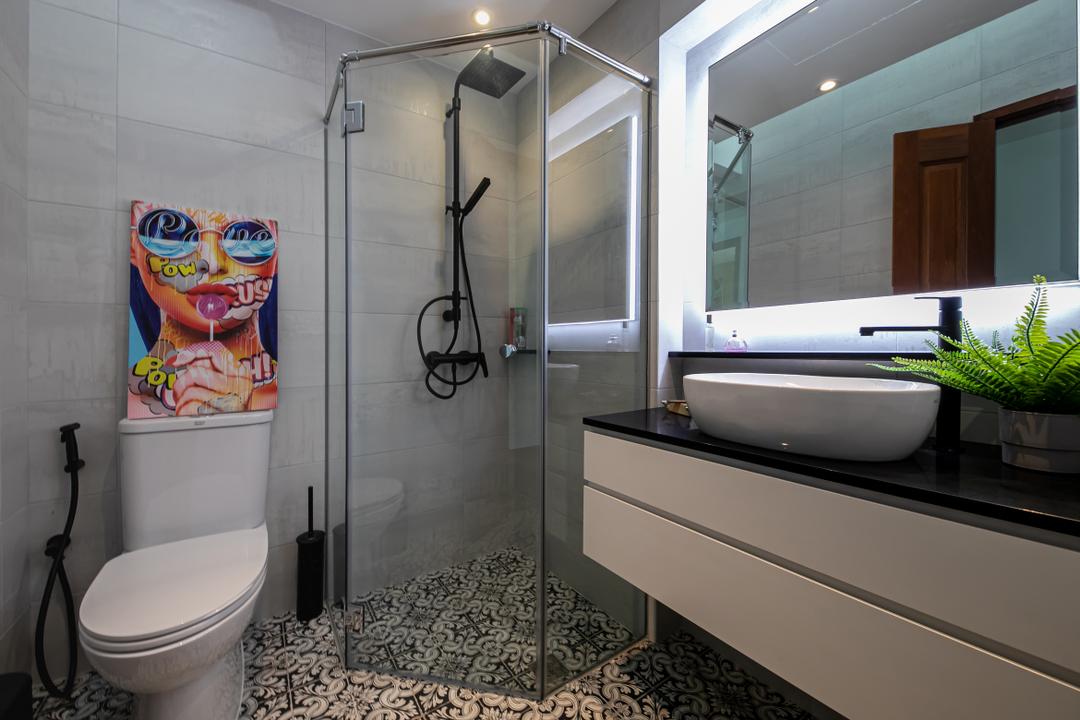 In addition to LED strip lights, a thicker backing was also installed behind the mirror to extend it outwards from the existing recess.

With these tweaks completed, every inch of space in the house has been fully maximised, both in terms of user-friendliness as well as aesthetic appeal, so it’s no surprise that Lesley considers this renovation a success.

“It’s a rare opportunity to be able to work on a ‘NYC loft’ like this, and I’m glad that everything, from the fixtures to the vibes, turned out just as planned,” says Lesley. “Even though it isn’t actually in the States, with the excellent view from the 14th floor, I’d say that this home is about as close to the real thing as you can get in Singapore.” 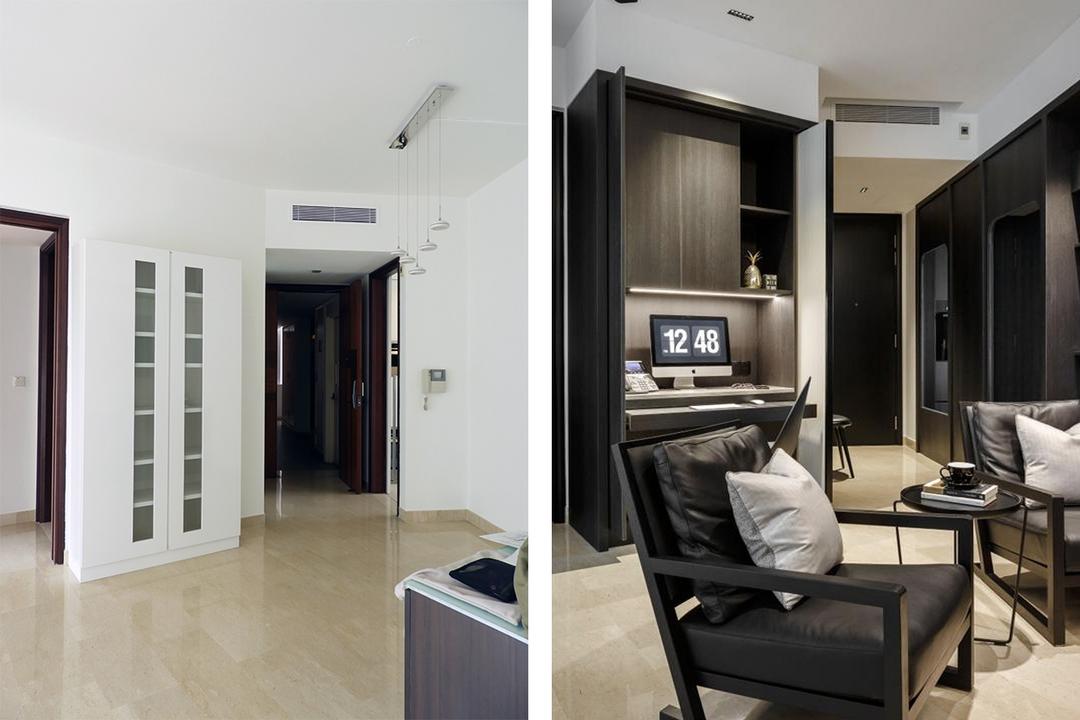 RENOVATION JOURNEY
You Can’t Tell Now, But This Newton Home Was a Bachelor Pad
Now home to four, this 116 sqm former bachelor pad in Newton was redesigned with spaces dedicated to family time. 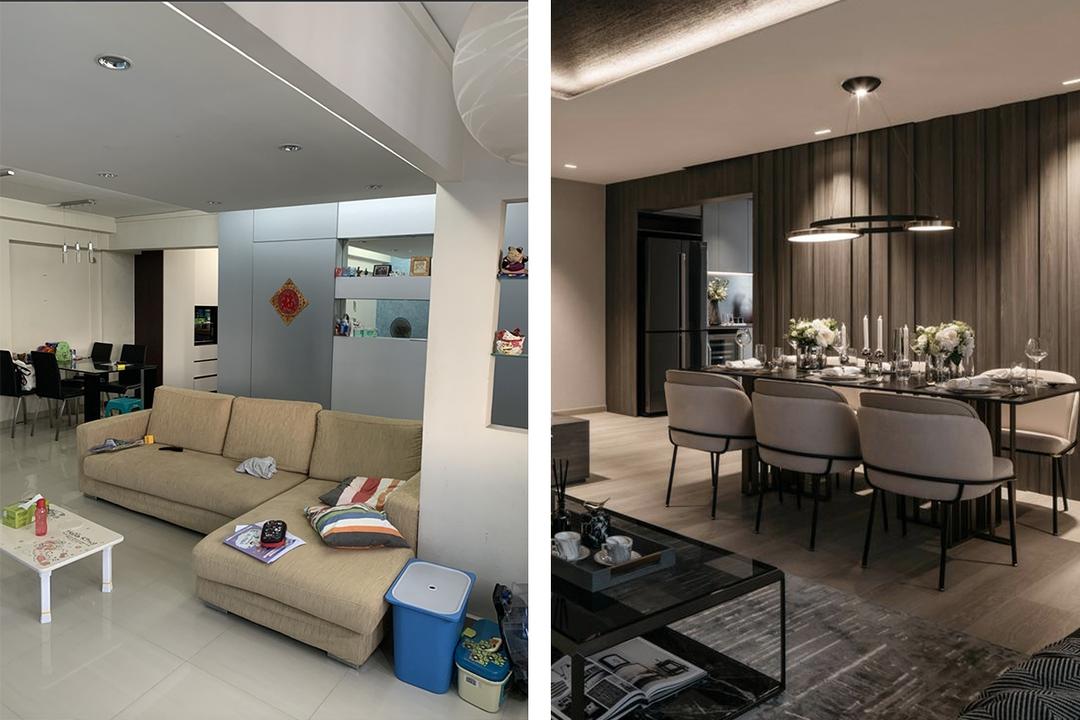 RENOVATION JOURNEY
For Years, This 5-Room Flat Had a Tight Layout – Until Now
Despite it being a 5-room HDB flat, this Bukit Panjang home was cramped – but that was only until last year. Here’s how 19EightyThree fixed it! 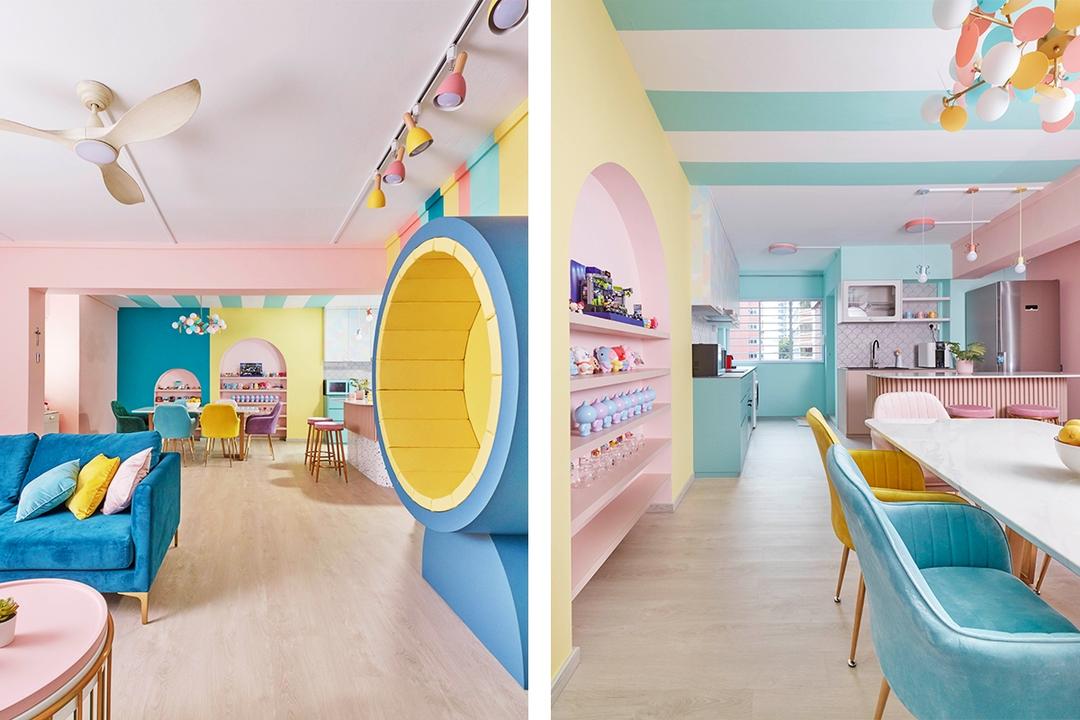 RENOVATION JOURNEY
This Tiong Bahru Flat is a BTS Fan’s Dream Home Come True
Inspired by a love for pastel hues, this homeowner transformed her home into an extra-colourful space with built-ins for her BTS/BT21 collection.
Preparing the next article…
Recommended for you