This Once-Dingy Resale is Now Our Dream Open-Plan HDB

Ask Bob Mubarak how he came about getting his home, and the answer will either make you laugh, cry (or do a little bit of both).

“Whenever I tell people this story, they feel like punching me in the face,” says Bob. “I went to view 13 houses with my property agent. This was the first.”

And that’s just the tip of the iceberg in Bob's dramatic renovation process. Located in Bukit Panjang, a place that ‘you’ve got to stay to understand that it’s convenient’, the home was initially a dingy, fixer upper – left crumbling and unoccupied for months. 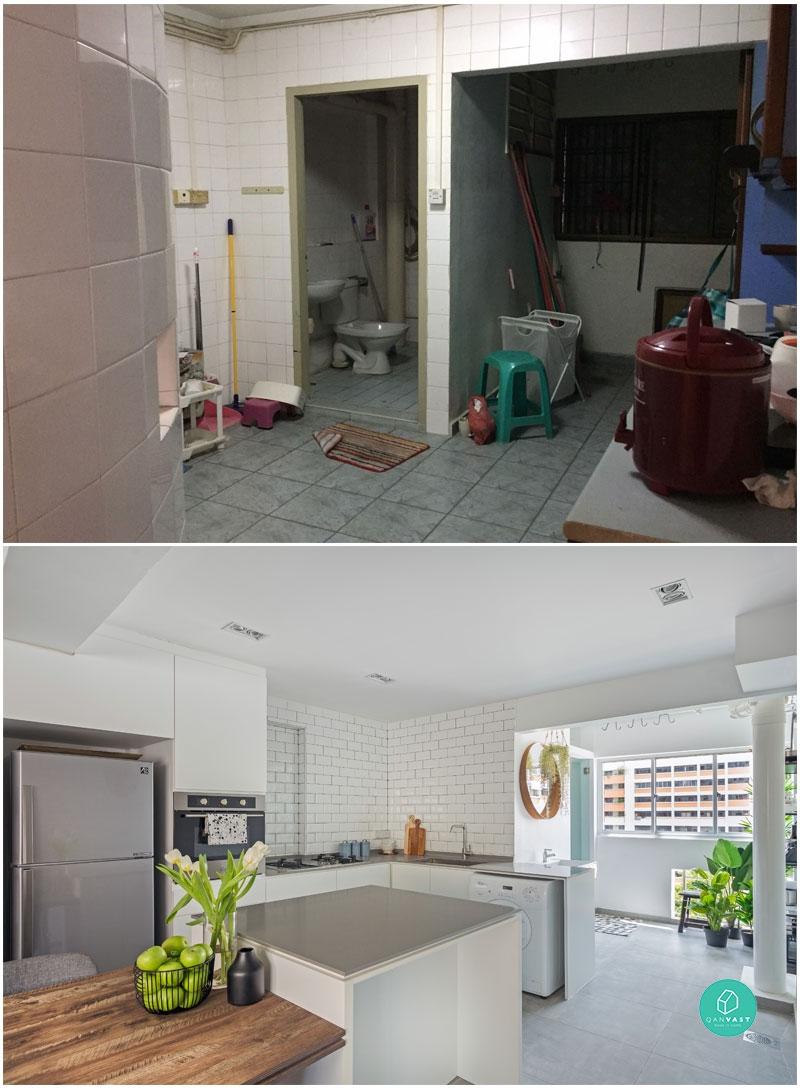 Bob's kitchen area, before (top) and after (bottom) renovation.

“No one could see the potential in this house – it was outdated, and the whole house smelled like stale toilet water, as the toilet bowl hadn’t been used (or working) for almost 6 months. Many friends who came over said that I wouldn’t be able to make it work.”

But armed with a clear vision, an eye for design (honed by years of HGTV-watching) and tons of good humour, Bob proved naysayers wrong – designing a relaxing, airy open-plan abode worthy of a TV show makeover. Keeping us gripped along the fun (and oft hilarious) ride, the bachelor spills all the details about his stunning resale abode. 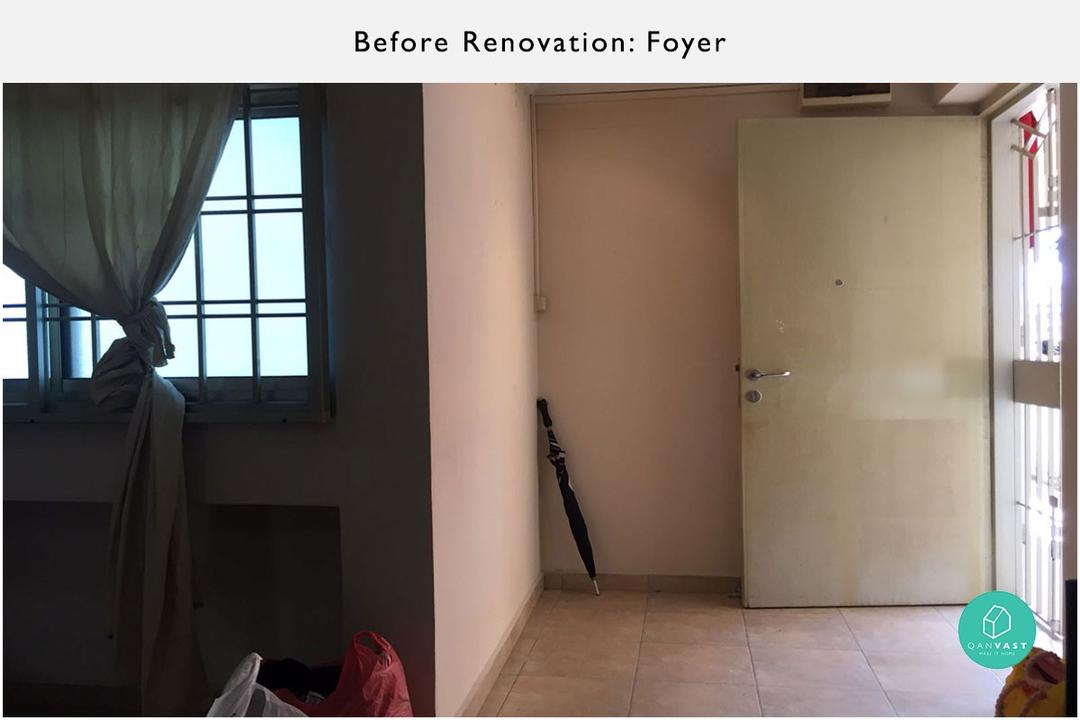 Q: Let’s start with the house - why this resale flat over a BTO?

B: Whenever I tell people this story they feel like punching me in the face, haha! I went to view 13 houses. This was the first house. I had specific requirements – I didn’t want a home that was near the central rubbish chute. Secondly, I wanted a unit that was high enough so that there weren’t any trees surrounding – because I’m scared of ghosts (laughs). In terms of the layout, I didn’t want any long, dim corridors and I planned to have an open-concept kitchen. This house ticked all the boxes. 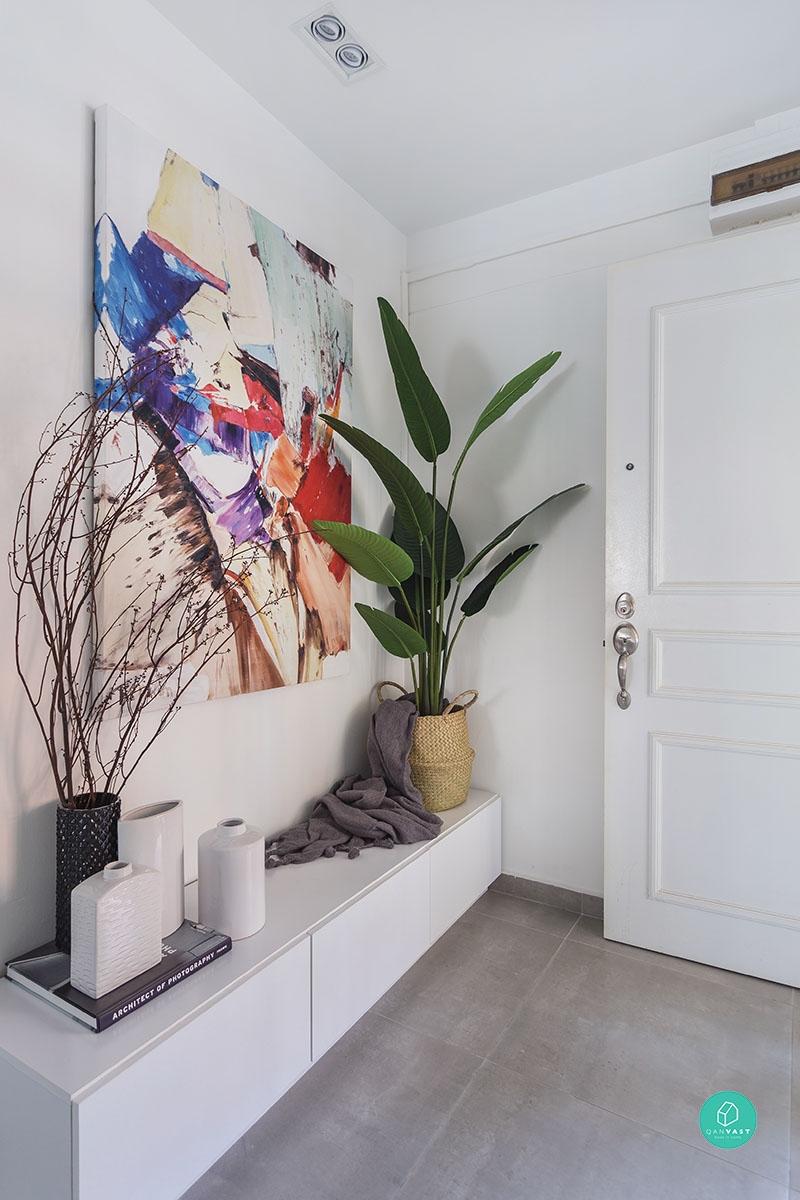 B: Most importantly, it was near my parents’ place at Bukit Panjang and it was affordable. Even though I’m living alone and don’t particularly need that many rooms, I wanted to treat my home as an investment so I traded up. I paid about $350,000 for my 4-room resale flat. 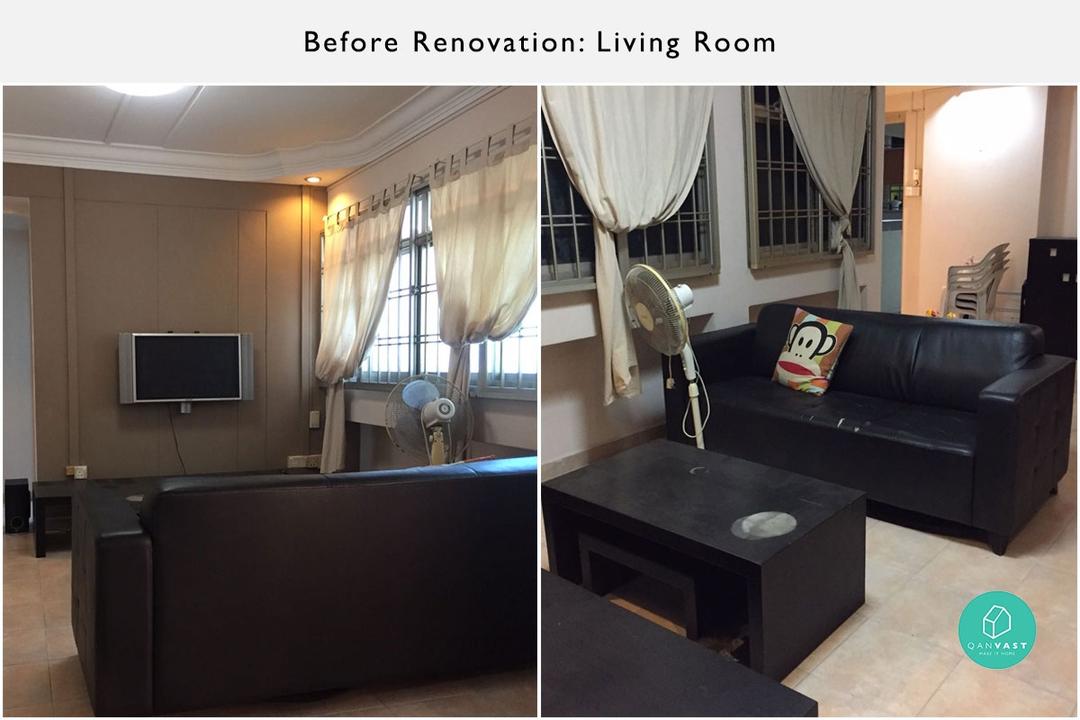 Q: How did you come about deciding the look of your house?

B: I initially wanted a black-and-white, colonial style look to my house, but when I first saw the apartment, I liked the abundance of light filtering in and didn’t want to waste it on a high-contrasting design. Then, I thought about going full-on white, but my interior designer advised otherwise, as she said that it’d look too clinical. In the end, we settled for this white-and-grey palette which was light and airy looking, whilst providing some dimension. 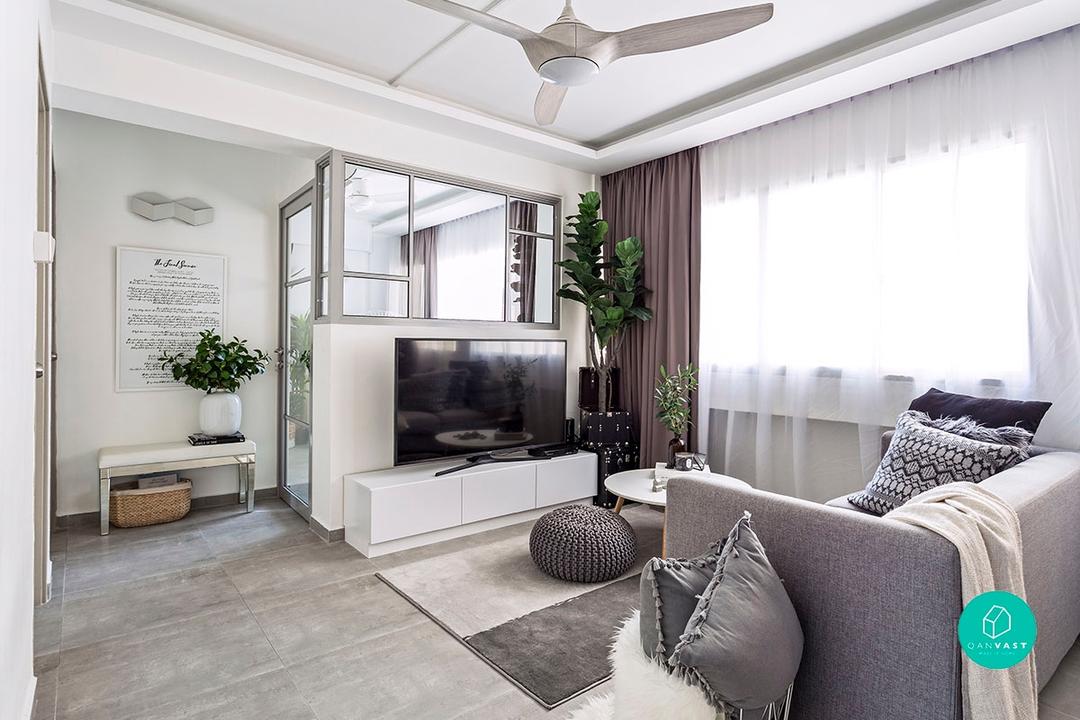 Q: Talking about interior designers, how did you come about working with your ID?

B: My designer, Kai was actually the eighth ID I met! I had a particular look I was going for, and when I met interior designers, I brought them pictures from Pinterest and Qanvast, and told them what I wanted to execute. About 3 or 4 of them shot down my ideas – such as having my bed frame facing the window instead of running parallel to it. Kai was one of the IDs that agreed with my plans, plus she was able to enhance the idea I had. And most importantly, I felt that I could click with her. 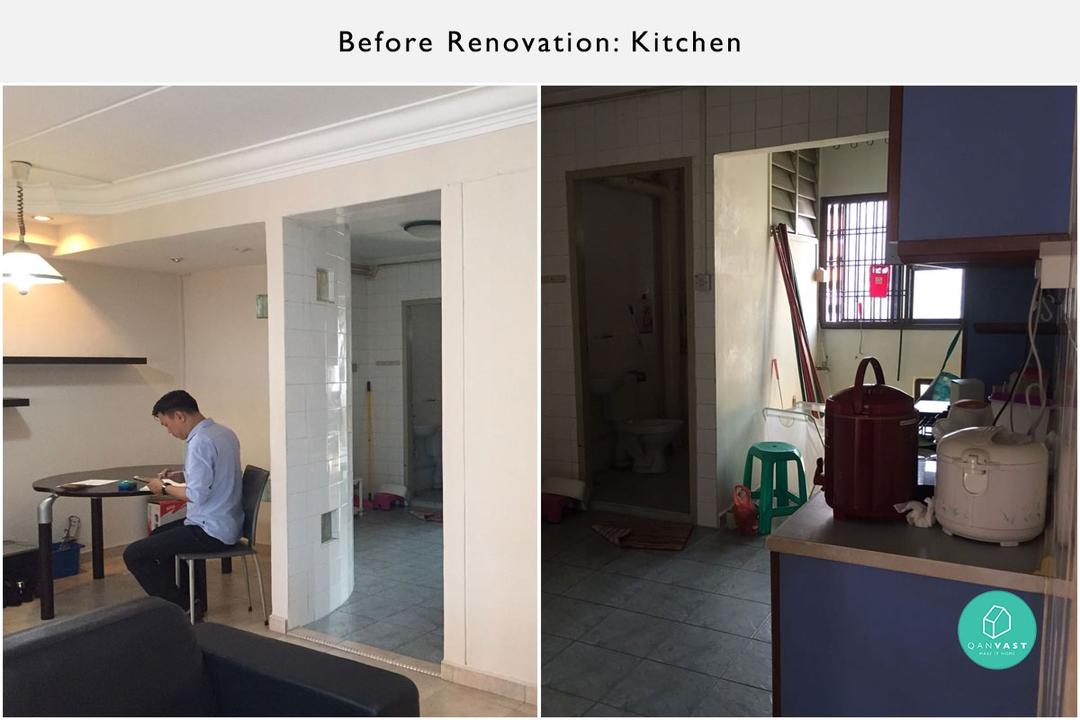 Q: Did you have to make a lot of structural changes to achieve the look you wanted?

B: Yes, there were a couple of stuff we had to change. The previous owner erected a curved wall with those old-school glass blocks, which had to go in order for me to form the open kitchen-cum living space. I also shifted the common toilet, hacked my bedroom’s master toilet wall to form a glass paneled door and created a half-wall for my lounge area by the living room. 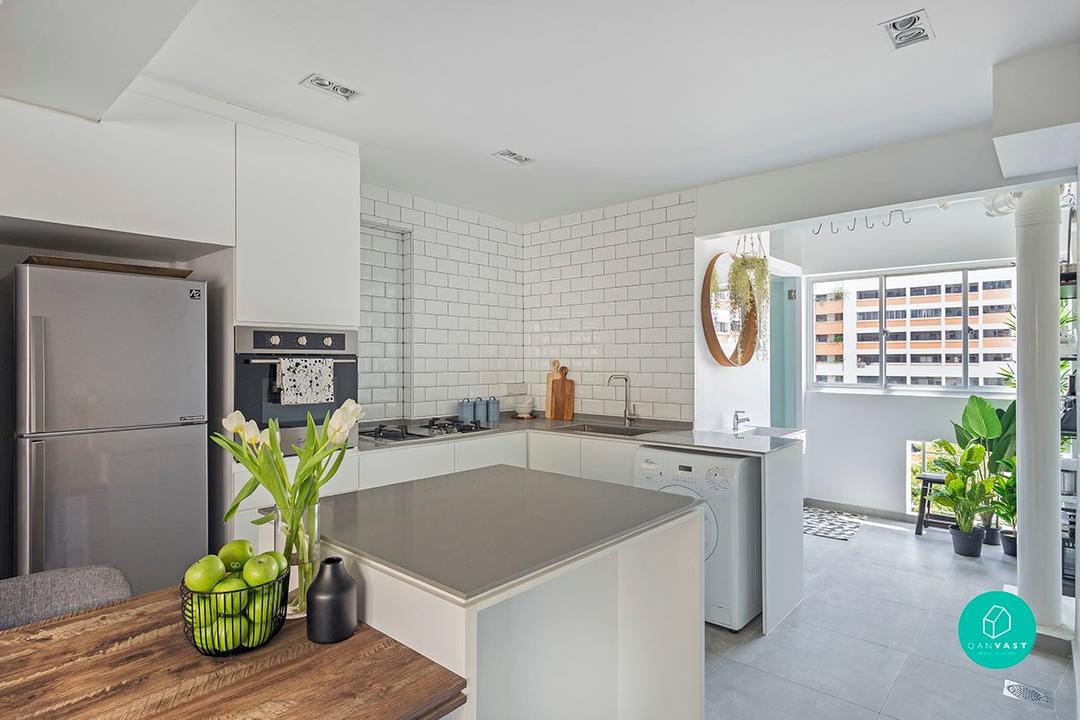 Q: How was the renovation process? Was it smooth, or were there any hiccups?

B: As our (parents’) house was close by, I could come over to check almost every day to make sure things was going well. There were setbacks though – one was when the contractor accidentally attached my detachable kitchen island (which was supposed to be extendable to form an extra dining table)! The second one was a bigger nightmare, though it had nothing to do with the ID. 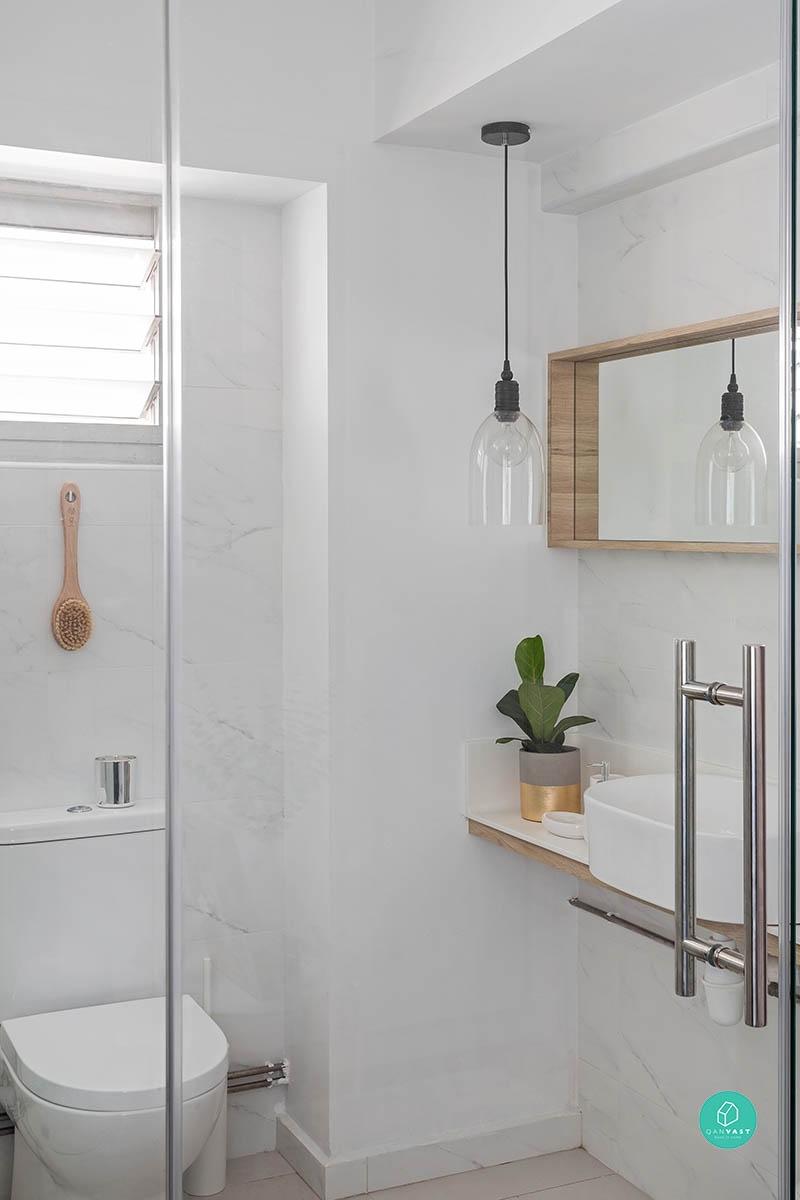 B: I hired a third-party provider to help me install my curtain track. I didn’t know why I decided to go with them, when the quote between theirs and my ID’s was only $50. Turns out, there was a water pipe running through my master bedroom’s drop ceiling. The installers actually drilled a couple times – almost hitting those pipes! Because it was hidden and they didn’t know where it was, they continued drilling to check. 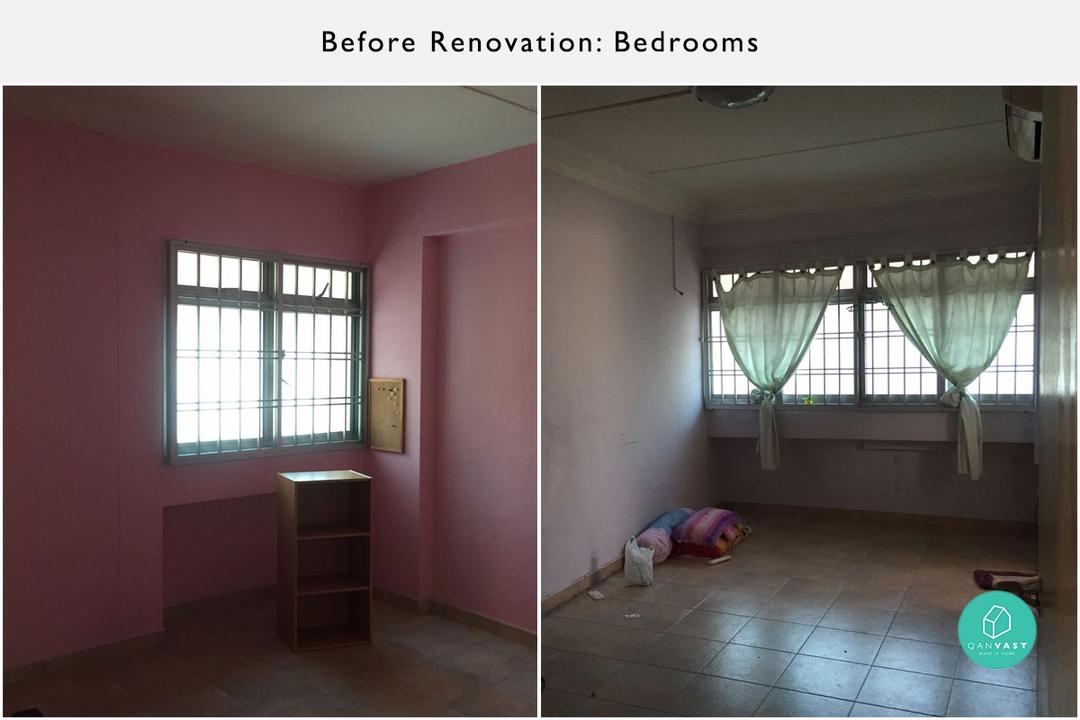 Q: How much did you spend in total for your renovation? 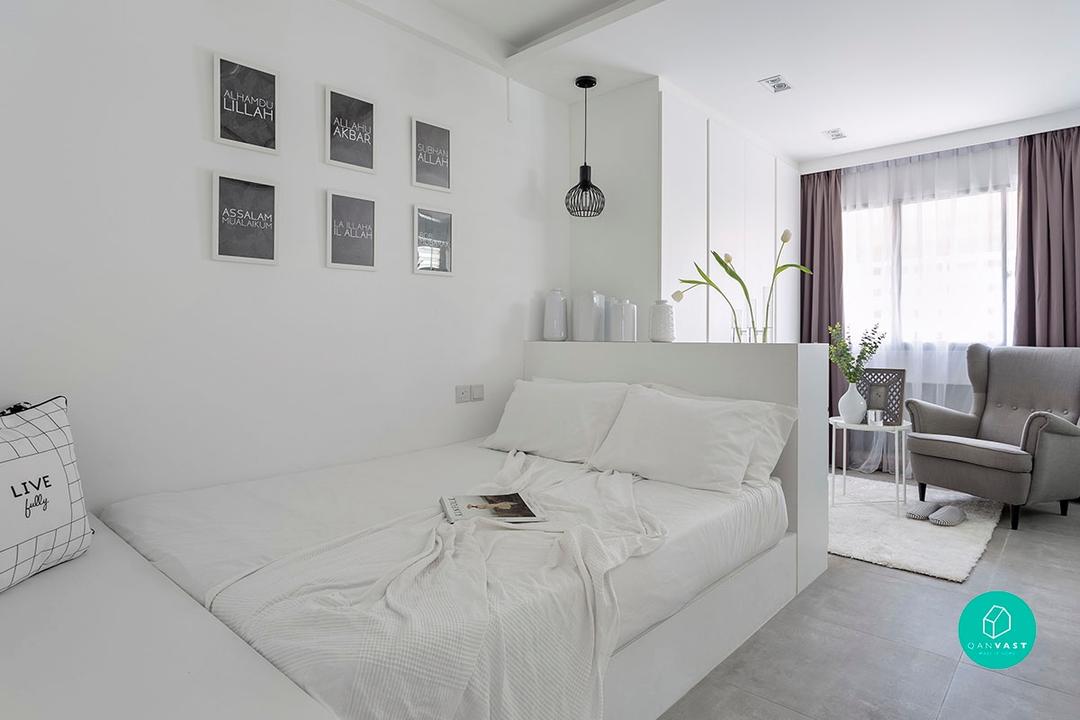 Q: What about furniture and appliances?

B: You wouldn’t believe it, but I only spent $5,000 on furniture and appliances alone! Okay, most of the big-ticket items (like the TV and refrigerator) were gifted by family, but I make it a point to never buy anything that’s over $1,000. And I only buy things when they are on sale. My friends all say I’m very stingy. 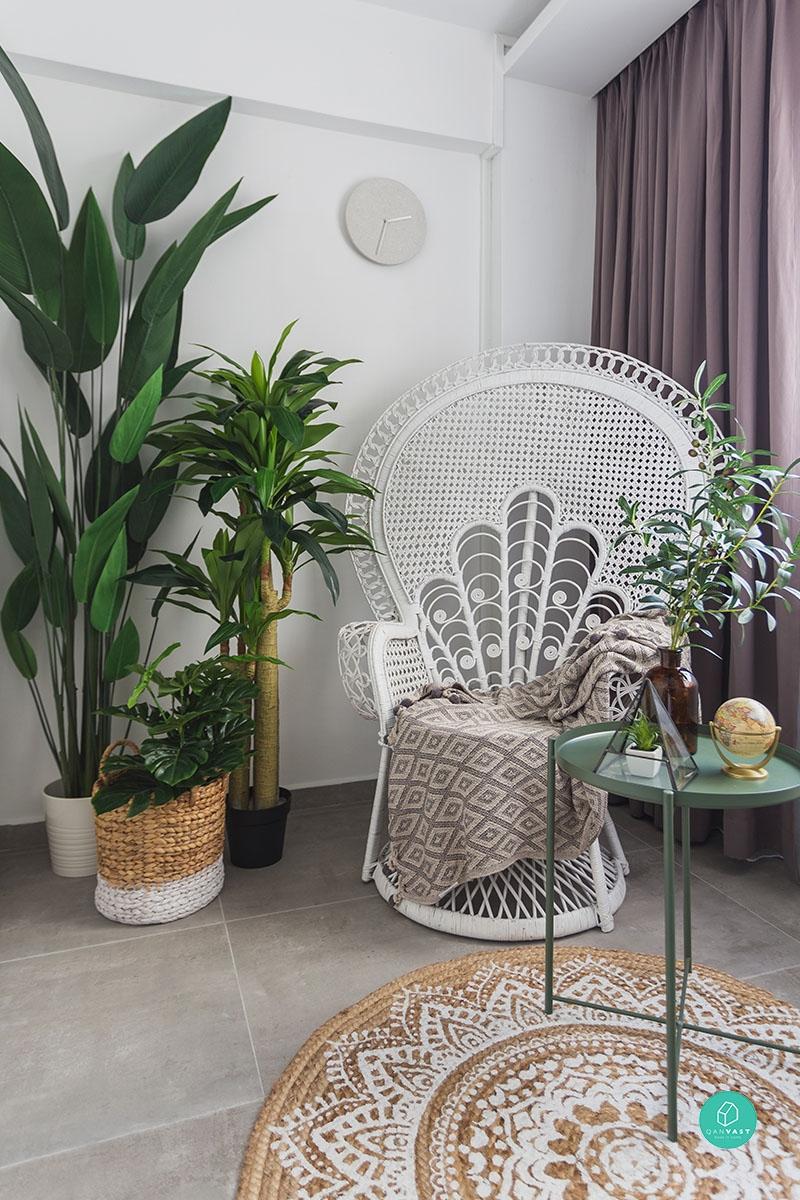 B: I trawl through SINGpromos to look for deals everyday. That’s how I got my sofa from Courts at only $179! There were only 20 pieces on sale and I took personal time off for it (laughs). I also love shopping on fortytwo.sg, Second Charm and Taobao. Because I can’t read Chinese, I invited all my Chinese friends over for a ‘Taobao Party’ – where I served them dinner while they typed all the Chinese keywords to help me find furniture, haha. I also bought a lot of accessories from Kaison in JB. 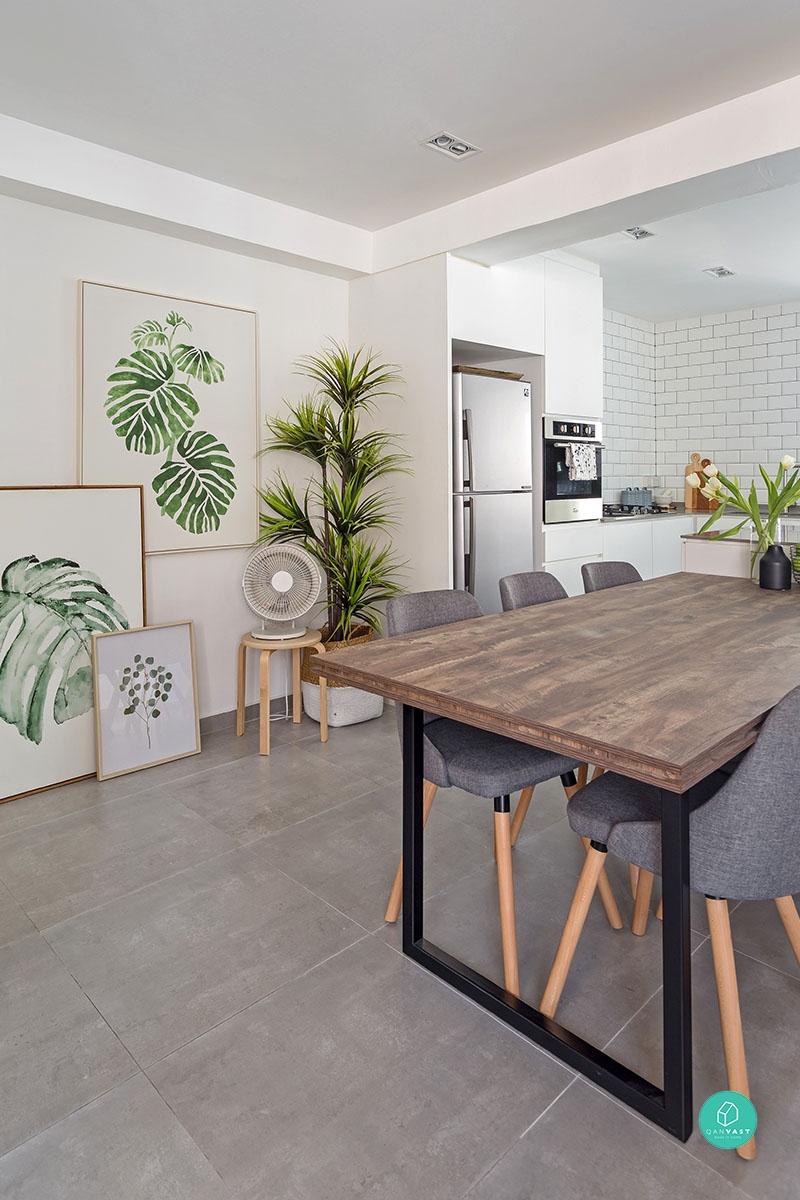 Q: Beyond renovation and furniture, how did you style up your space?

B: I watch HGTV everyday and picked up many interior styling ideas from there. I also follow the Instagram accounts of interior stylists and watch styling videos on Youtube. One styling trick I use is to create ‘texture’ by using different colours or finishes instead of using one single hue. 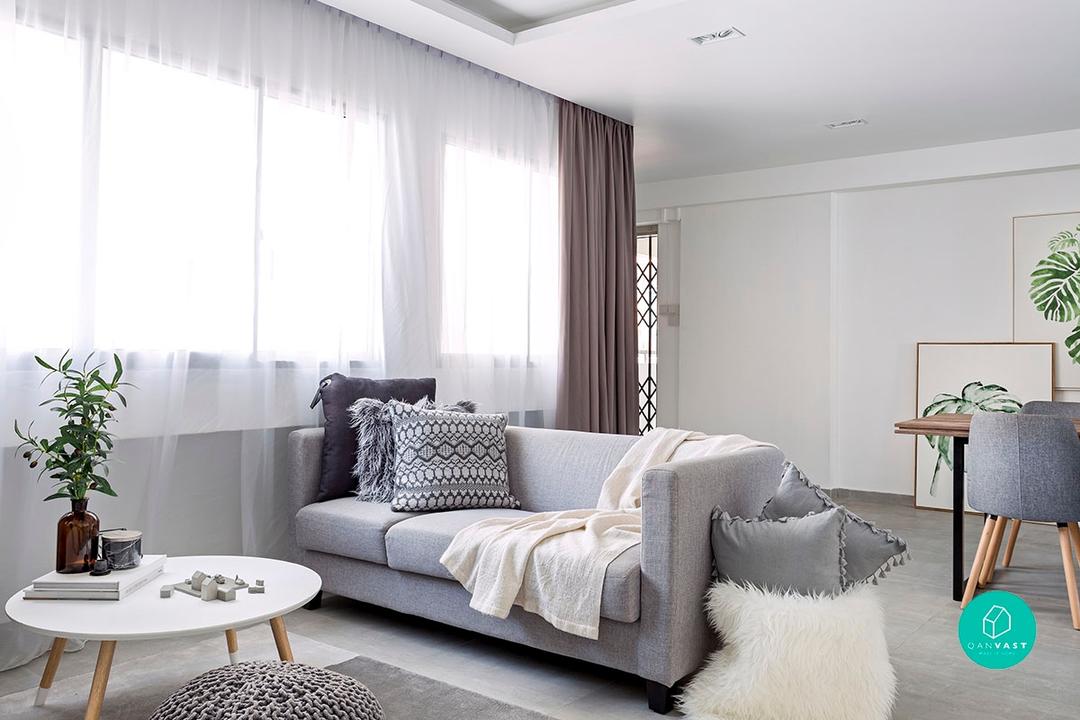 B: Another trick is to break shapes; if there are too many rectangular shapes in a space, I’d switch it up with rounded accents. For instance, my living room’s sofa felt a little too serious and boxy, so I added some plush cushions to create some ‘fun’. Likewise, I like to soften sharp edges like room corners using fake plants. 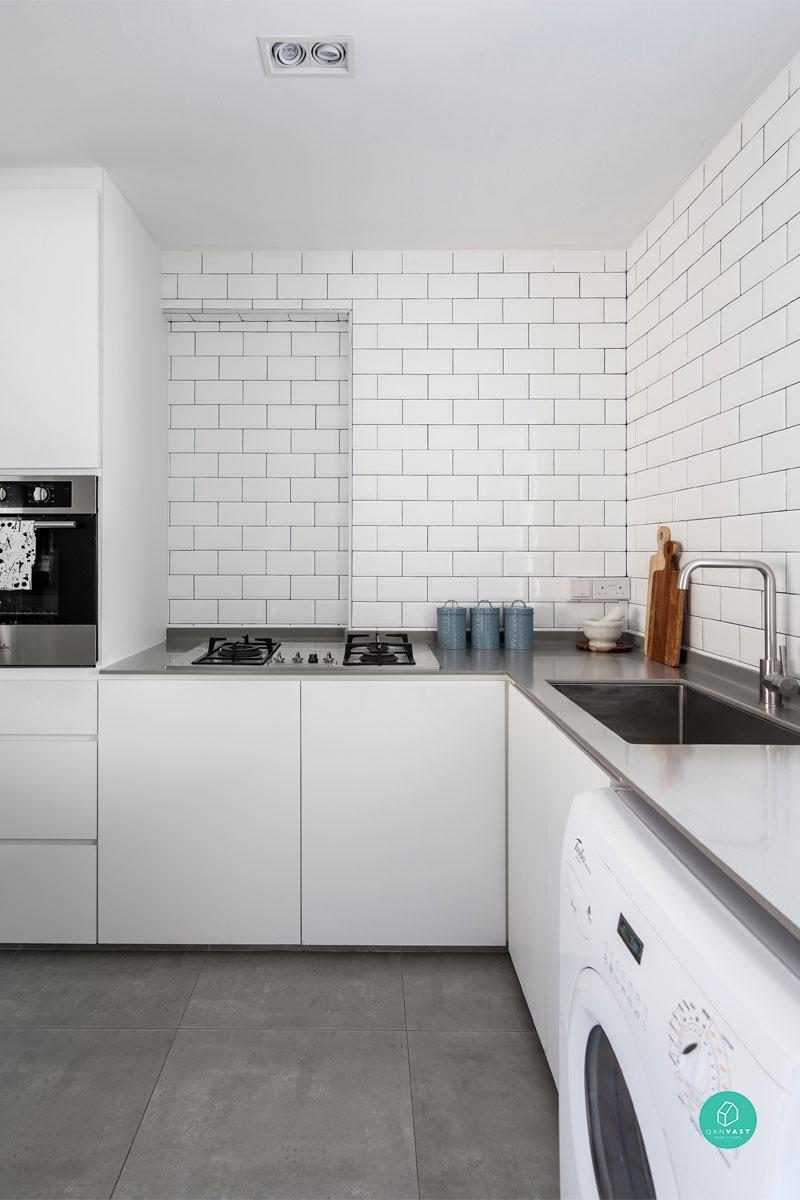 Q: What’s the best part about renovating your home?

B: Seeing the before and after of things. I think I bought a house, and created a home out of it. When I bought the flat, I brought a lot of friends over, and many questioned me about why I chose it. There was a strange toilet smell upon stepping in; it wasn’t occupied for like 6 months and no one could see the potential in this house. It kind of put a wet blanket on my plans. So, when everything was completed, there was a sense of satisfaction. I actually completed it! And many of those who said I couldn’t do it were surprised that it worked out. But the best part is really putting my personal touch – I grew up a lot throughout the whole process. 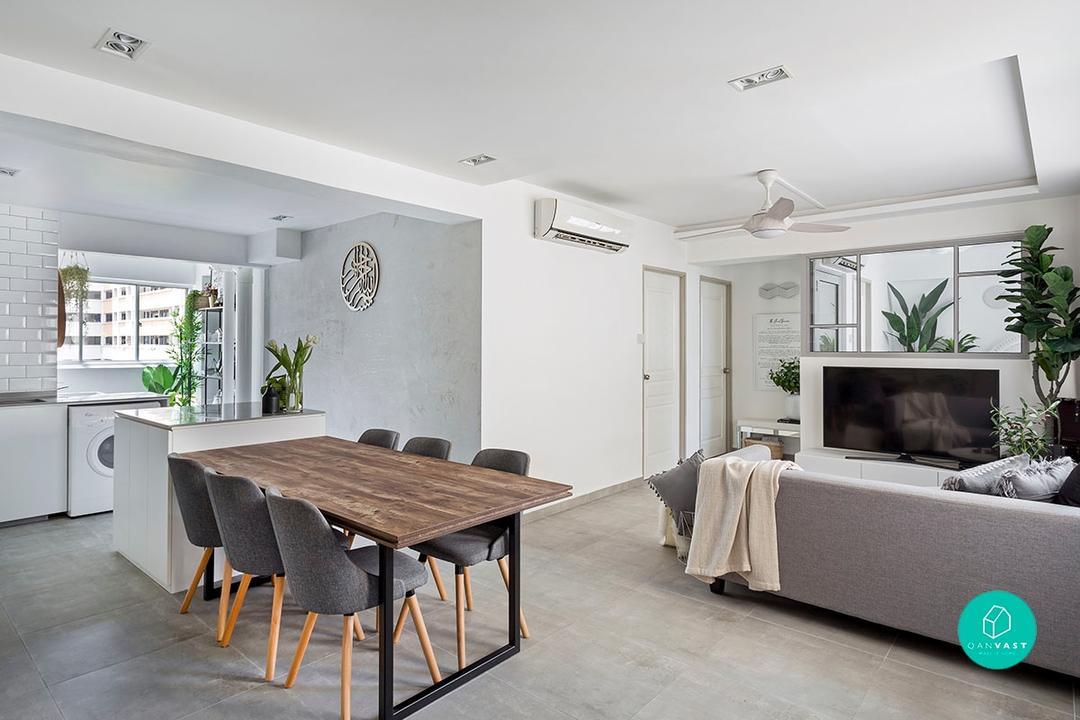 B: If you want to do any structural works – do it all in one renovation. I decided to hack my living room wall to create the half wall after I moved in, and it was such a hassle. The dust is so overwhelming. I also realized that on hindsight, my house was functional even without the half-wall. Sure, it looks nicer, but it gave more trouble than let on.

An experienced interior designer can help to design a bright, open-plan abode that makes the best out of your space. Request for free quotes here, and we'll match you with 5 interior firms, based on your budget and style. All recommendations made by Qanvast is covered under our Qanvast Guarantee, up to $50,000*.

Looking for more amazing local home ideas and helpful renovation guides? Download the Qanvast app today and save your favourite interior looks, tips and connect to listed interior designers on the move. 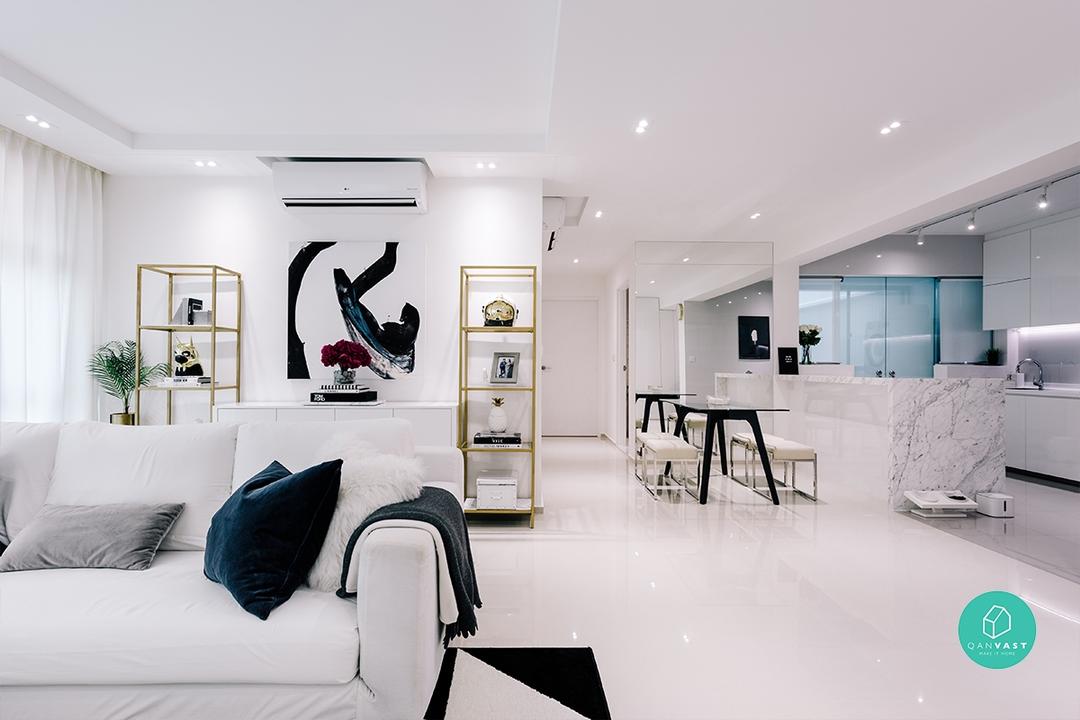 RENOVATION JOURNEY
This Stylist’s Showroom-Worthy BTO Is Every Girl's Dream
Glitzy, glamorous and with a walk-in wardrobe worthy of a magazine mention, how does fashion stylist Melanie Mak keep her all-white BTO pristine every day? We just had to know - and discover her impeccably designed space. 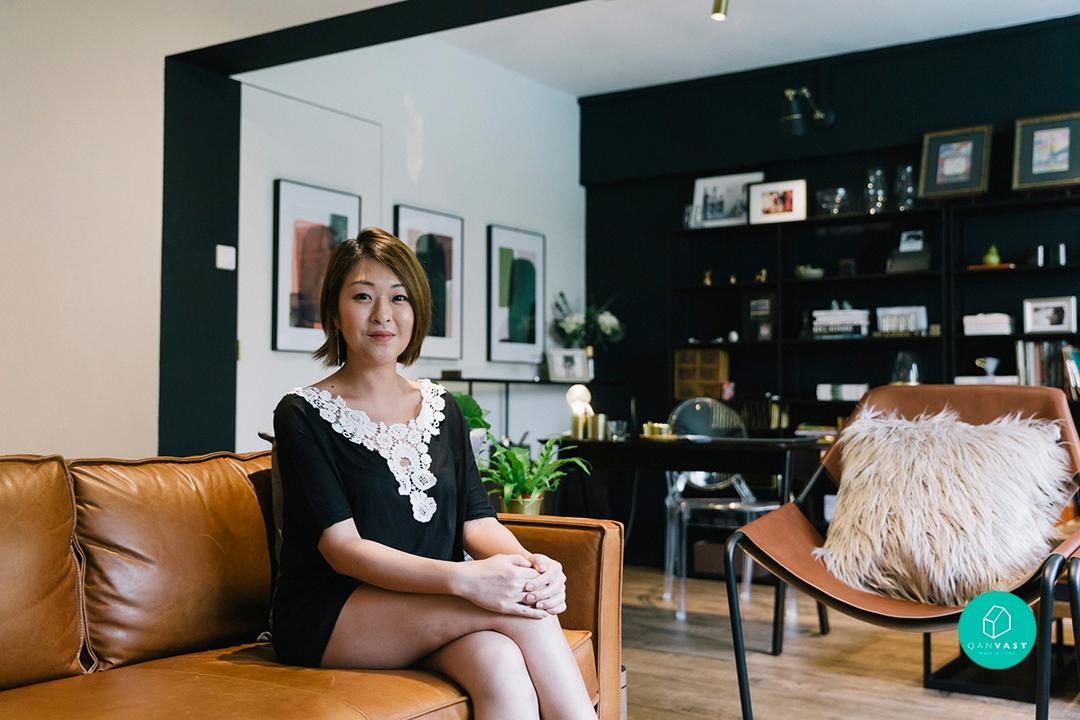 RENOVATION JOURNEY
Sandra Sim’s Home Is The Most Rule-Breaking HDB, Ever
Black walls - check. Modular layout - check. Everything from Taobao - check that too. Designer and co-founder of Sum Yi Tai Sandra Sim’s HDB is a home of extremes - in a massively good way.
Preparing the next article…
Recommended for you