From dingy resale to what’s probably the coolest home in the neighbourhood.

You might not know him by name, but you might have watched one of the many films and commercials that Shyan Tan (@tshyan) has worked on.

In his years working in the film industry, the freelance cinematographer has had a careful hand in producing everything from music videos for Singaporean singer-songwriter Gentle Bones to ‘New Resident’ – a poignant short film about Sin Ming’s red junglefowl chickens that made the news earlier this year. 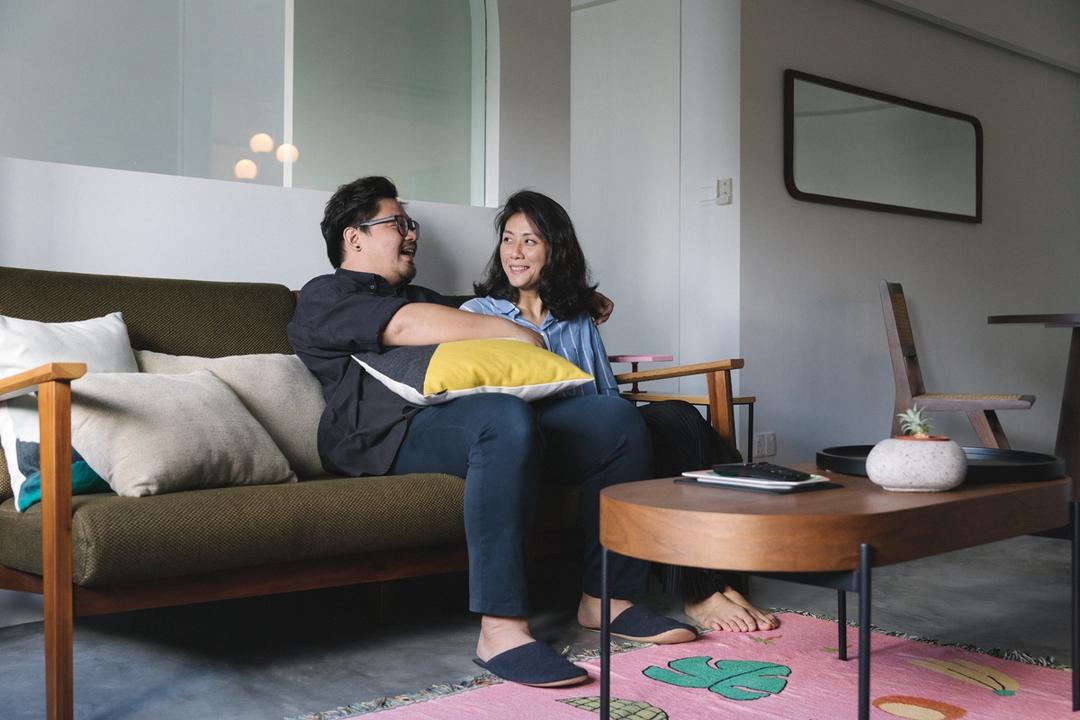 Cinematographer Shyan and his wife, Joy, who is a civil servant 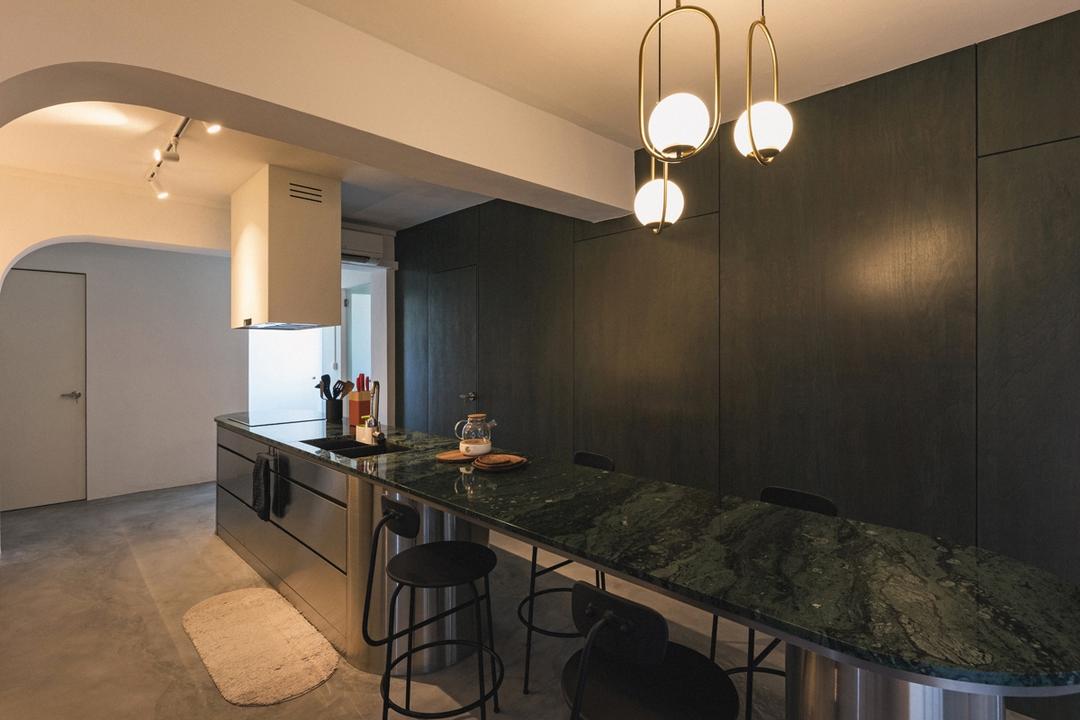 And taking a look at Shyan’s highly personalised 5-room flat in Ang Mo Kio, which he shares with his wife, Joy, it’s clear to see that his attention to reel life has, quite literally, shone through in real life.

In particular, Shyan had a hand in creating the apartment’s lighting scheme, so there “will always be a nice contrast no matter where you are” – pair that with great décor and a free-flowing layout, and you get an extra-creative HDB home that’s as inspired as a Wes Anderson film set! 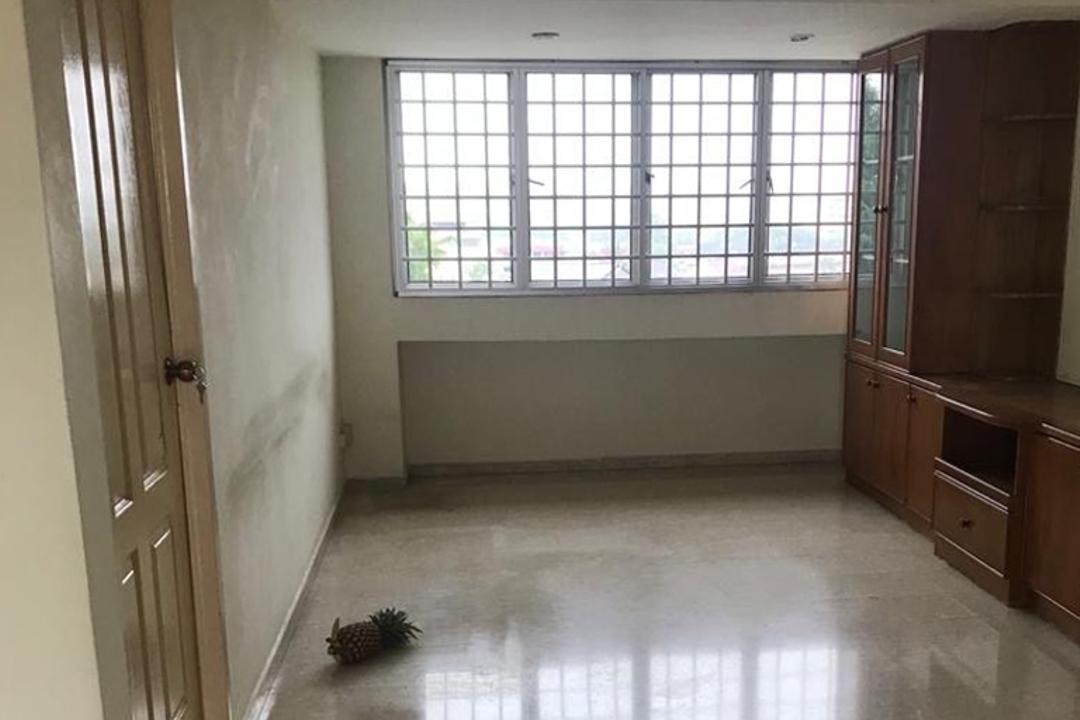 The living room prior to the renovation

Shyan (S): We’re both actually quite introverted, but we also like to have a lot of friends over, close friends. So, if you see, there are actually plenty of corners where we can gather, which Open Studio, our interior designer, created for us. We had all this space because this is quite a large resale unit. I think it’s a 5-room plus, about 1,377 square feet. 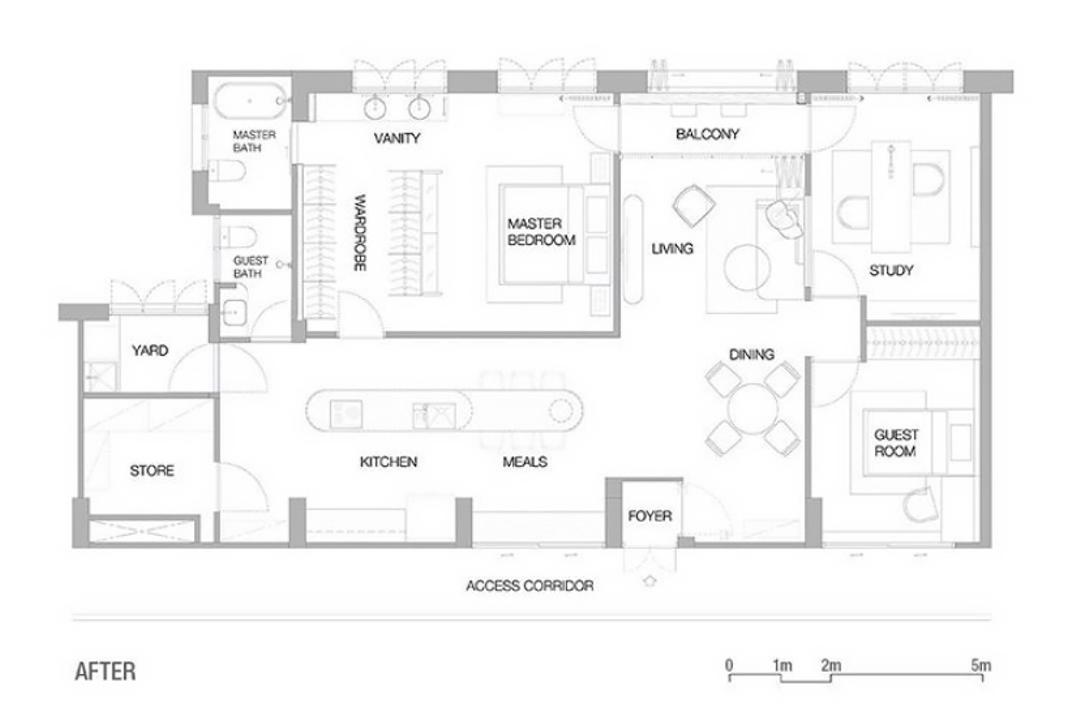 The floor plan of Shyan and Joy's home, courtesy of Open Studio.

Joy (J): In fact, when we came to look at the house, there were actually 4 bedrooms. I am sure you know 5-room flats usually have 3 bedrooms, a living room and a dining area, but this one had one extra bedroom.

About the entryway and dining area

S: We always wanted a slightly vintage-looking gate, and Open Studio recommended a couple of designs to us and we eventually settled on this blue-green one. We like having colours in our home, just not the ones that pop, so this gate is an exception; it’s there so that people go “oh, that’s nice!” when they see it, but we don’t have to deal with it once we’re indoors. 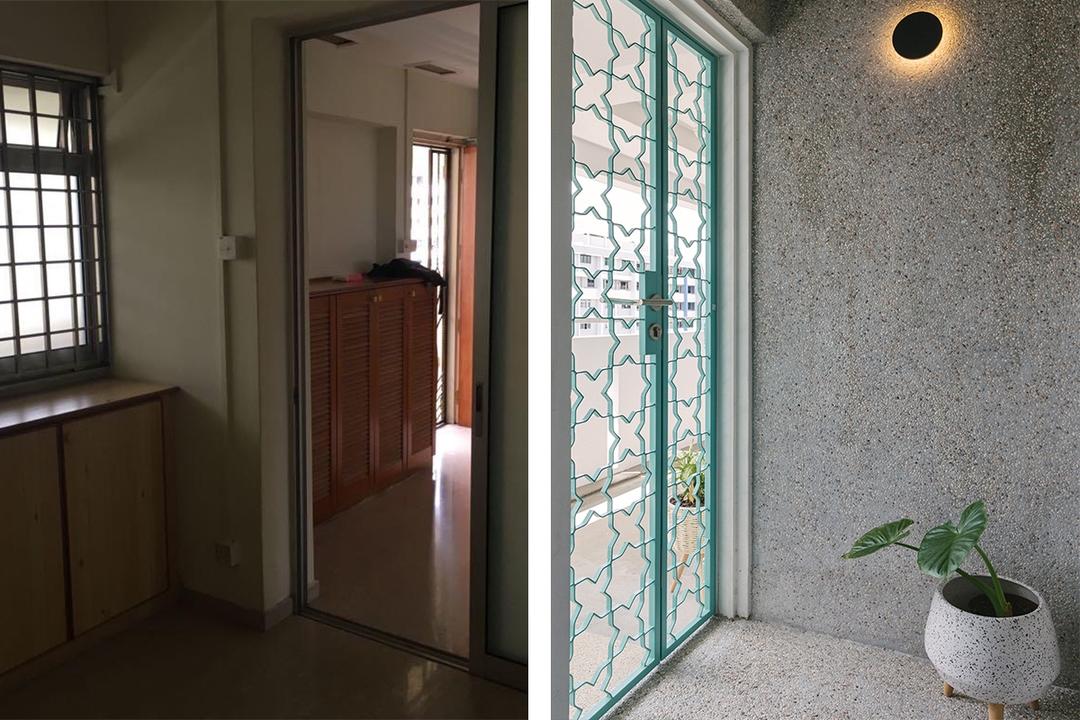 The entryway before (right) and after (left) the renovation

Also, a bit more about the entryway, it has a foyer with a cross-screen, and that comes in handy because we regularly leave the door open to let in the wind but at the same time, we don’t want outsiders to have a direct sightline into our home. 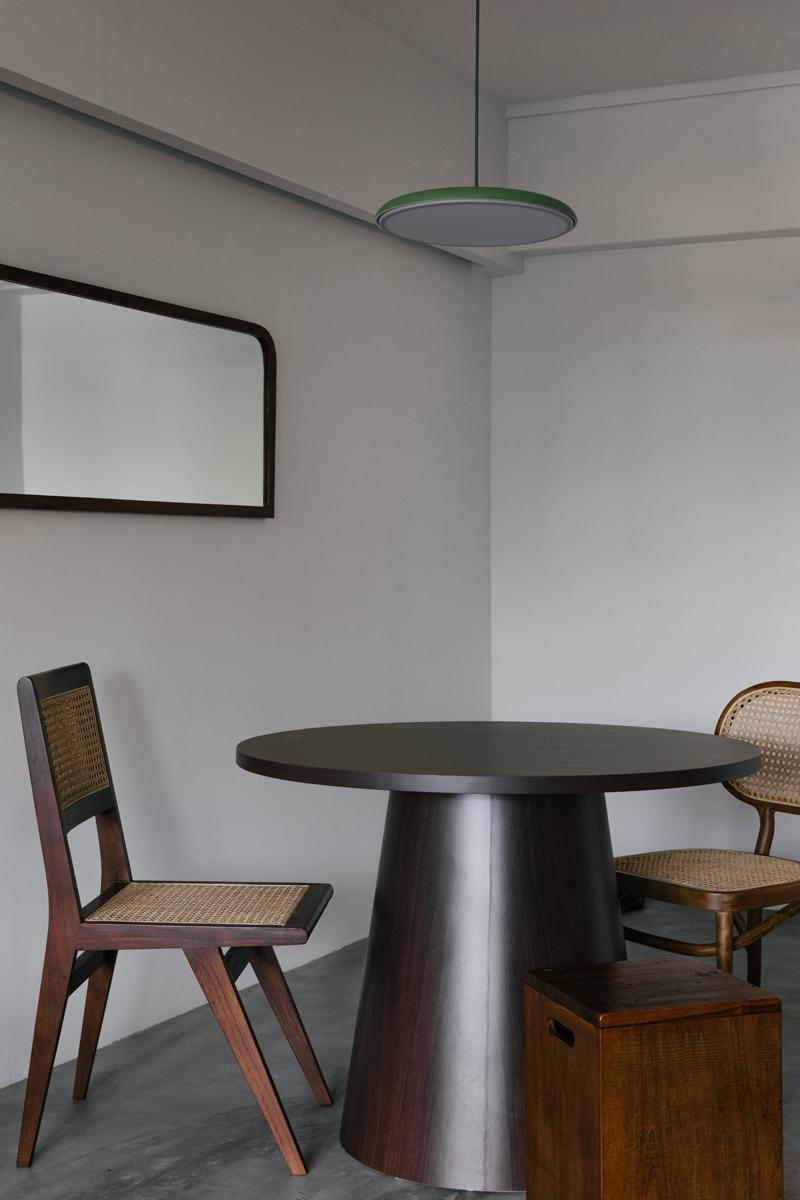 J: There’s a long counter in the kitchen that we use for entertaining guests, but when it’s just the two of us, eating there can feel quite lonely. That’s why we decided to have a small dining area here that’s more suited to everyday use. But at the same time, because of how close it is to the kitchen and living room, when any of our friends hang out here, they won’t feel like they’re isolated. 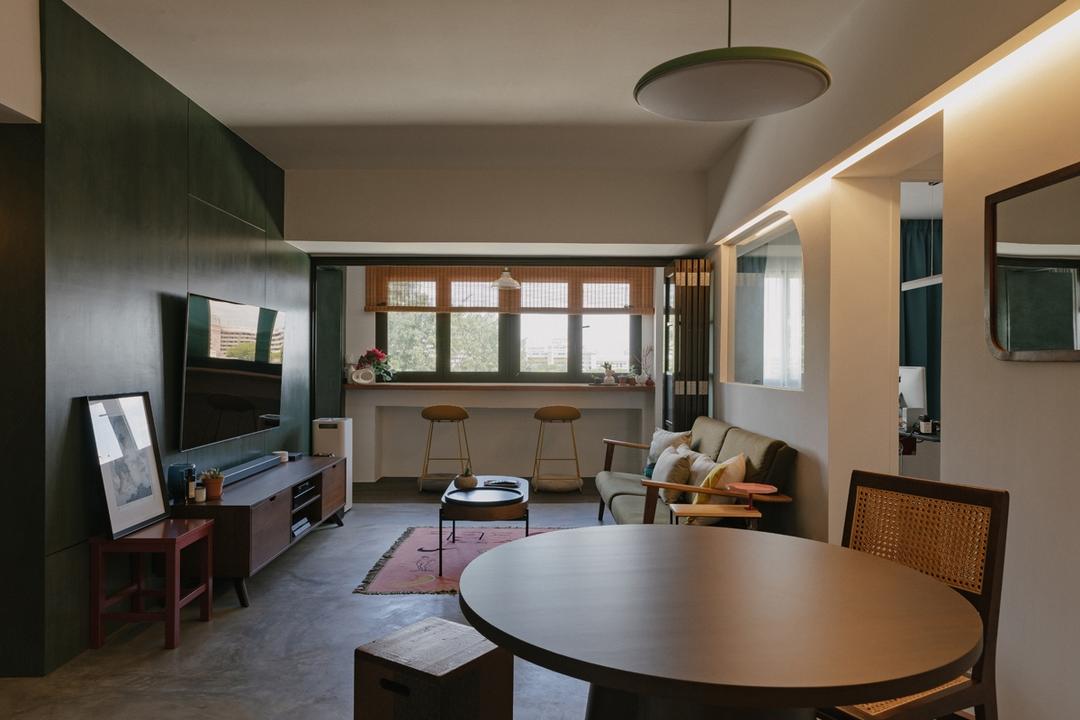 S: Initially, the wall coverings at the front of the living room were going to be just regular plywood, but it was bit too one-tone, so our designers proposed having them in a shade of bluish-green, which was what we liked. In a way, the panels also serve a zoning purpose – everything behind them is our private space, like our master bedroom and walk-in wardrobe, while everything else in front is open to our visitors.

About the ‘hamster tunnel’

J: So, we’ve what I like to call a ‘hamster tunnel’ in our house. Because of his (Shyan’s) work schedule, I’d sometimes be alone at home for periods of about a week, and due to that, one of the things that we wanted from the get-go was the option of making the space feel smaller and less lonely, but without affecting its flow. 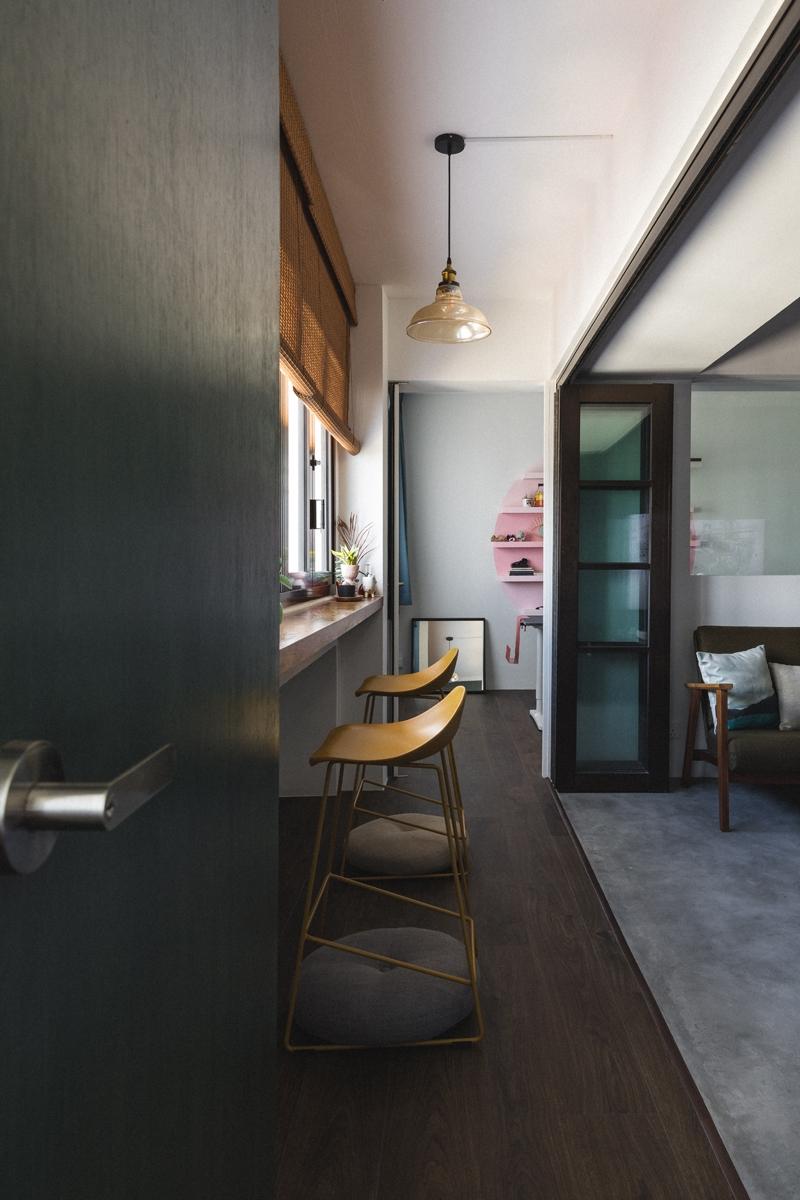 By closing the sliding doors beside the window seats, it creates a passageway from the study to the bedroom and then the kitchen, so I’d be able to get to all these spaces without crossing over into the living area.

But on normal days, the ‘hamster tunnel’ is just a chill-out spot where we can get a nice view of the surroundings. In fact, when the community centre nearby has events like ge tai and other performances, and we can just sit here and enjoy them.

About the study and its lighting scheme 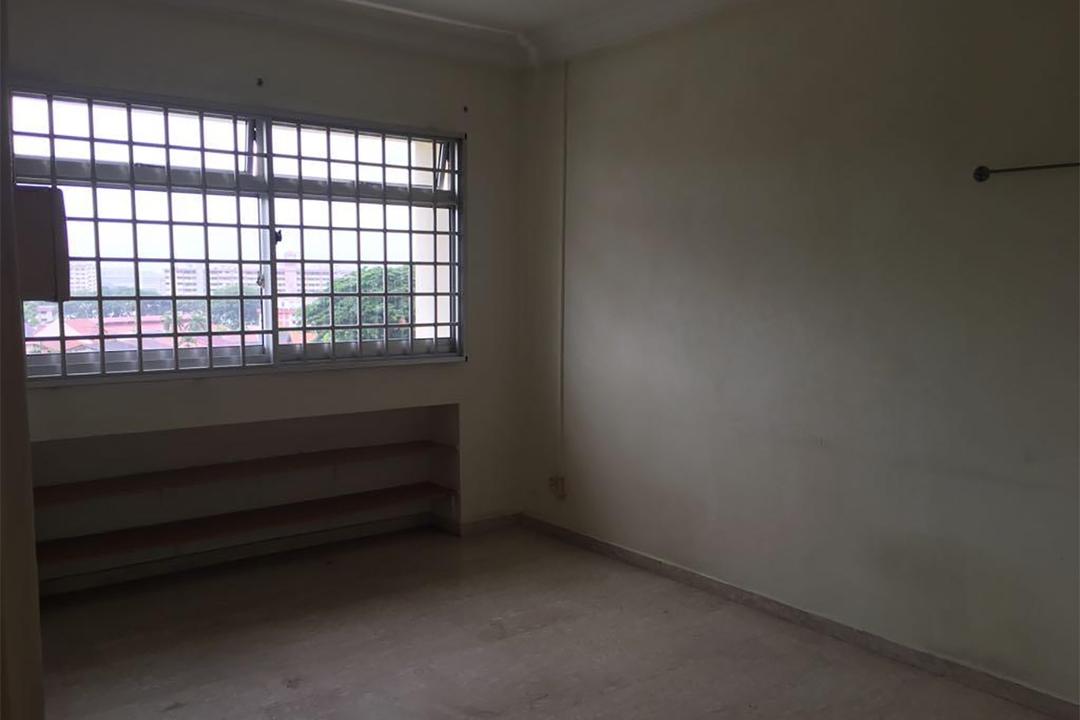 S: Joy has her ‘hamster tunnel’ and I have what I call the ‘command centre’ because you can see the entire space outside through its window above the living room sofa. That way, we’re still connected even when I am doing my work and she’s watching TV outside.

The décor is pretty basic, not much is built-in except for the shelves. Initially, we wanted it to be on one of the walls outside or in our bedroom, but in the end, we placed it here as an accent. It makes the study look less boring, so I guess that worked out. 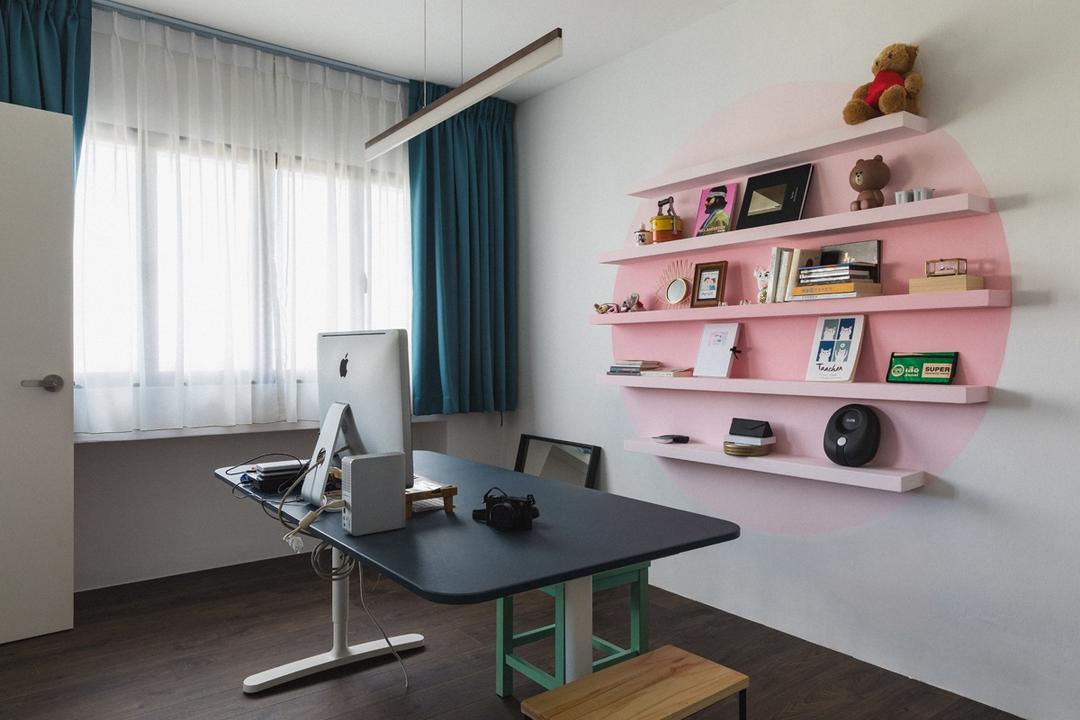 The suspension lamp above my workstation is from Taobao, and it’s good because it diffuses light towards the sides. It’s not like a traditional ceiling lamp or hard light which make it hard to work in small spaces because they’ll cause your shadow to be cast on whatever it is that you’re focused on.

About the kitchen and its details 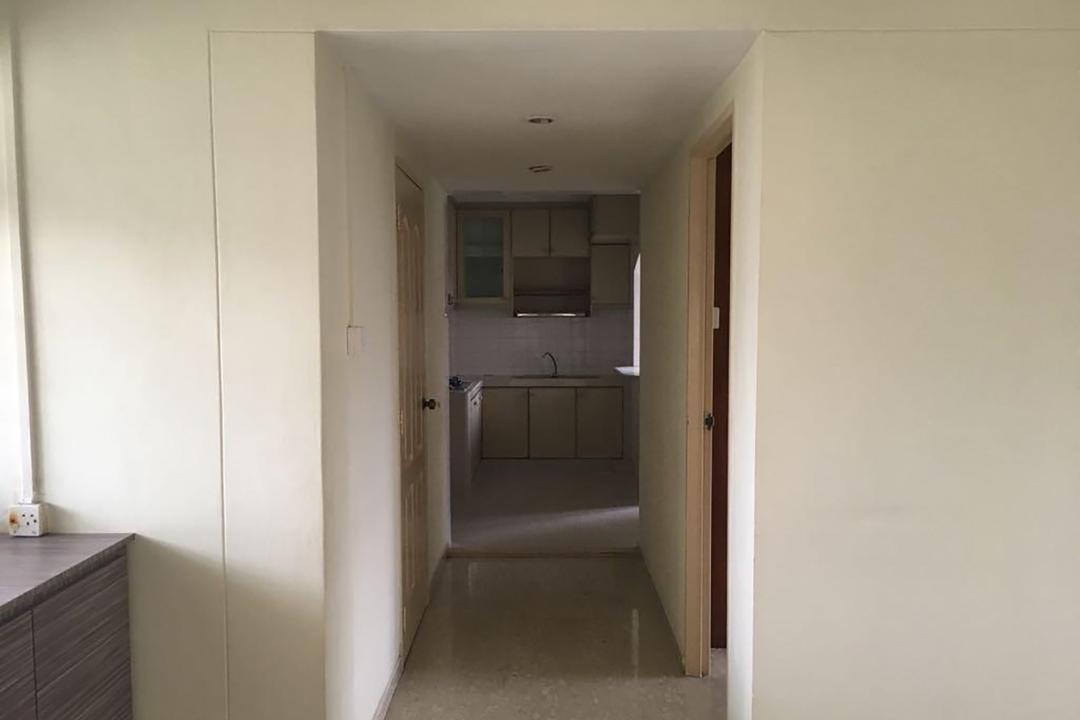 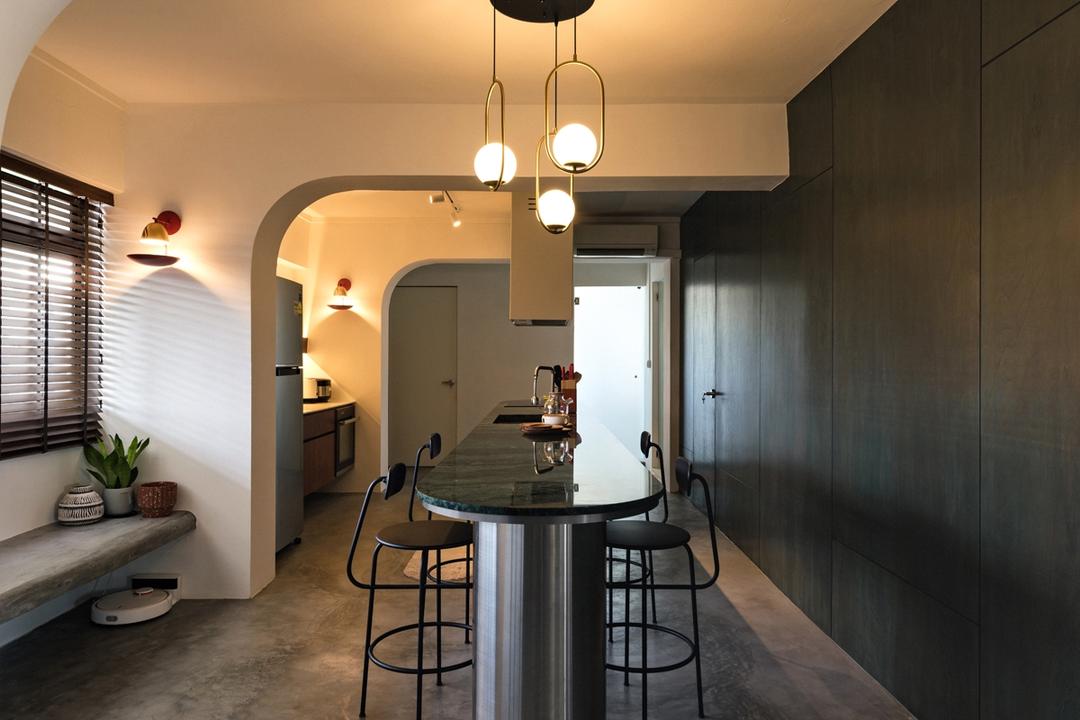 S: There used to a passageway leading into the kitchen, it’s really long and there was a storeroom on the left-hand side of the space. We had it demolished and turned into a cosy nook. The initial aim for this area was to have a window-side bar, but we changed our minds when we got the long kitchen counter. There’s now a concrete bench there, which our guests usually place their bags on.

There were also these overhead beams on the side that we couldn’t get rid of, so it became a hallway arch. I like the curves because they match the look of my ‘command centre’. 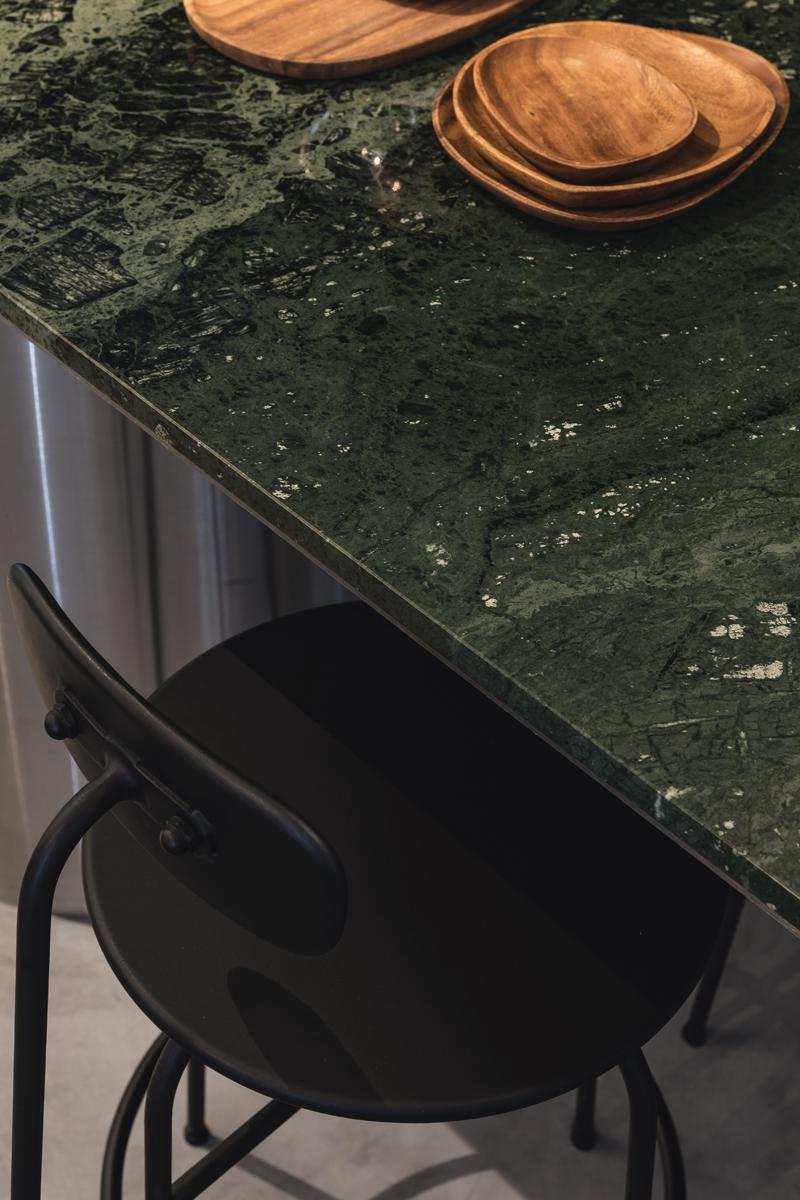 To protect it, the counter’s marble top was treated with a waterproof protective layer. “I have heard people say that marble is porous, and it’s prone to water marks, but because ours has a waterproof coating, it’s fairly easy to clean so far,” says Shyan.

J: It’s the biggest splurge for our renovation, but the kitchen counter is worth it. It was one of those things that we really, really liked and were willing to spend on, so we had to find ways to budget for it like saving on the rest of the furniture. And also, because of its size, it’s one of the first things you see when you come in, so it had to look nice.

The marble top was from a factory that we visited at Choa Chu Kang, and we fell in love with the patterns. They’re quite unique and the veins have this nice, wavy look, which is totally different from the thin ones you see on Carrara marble.

About the common bathroom’s new look 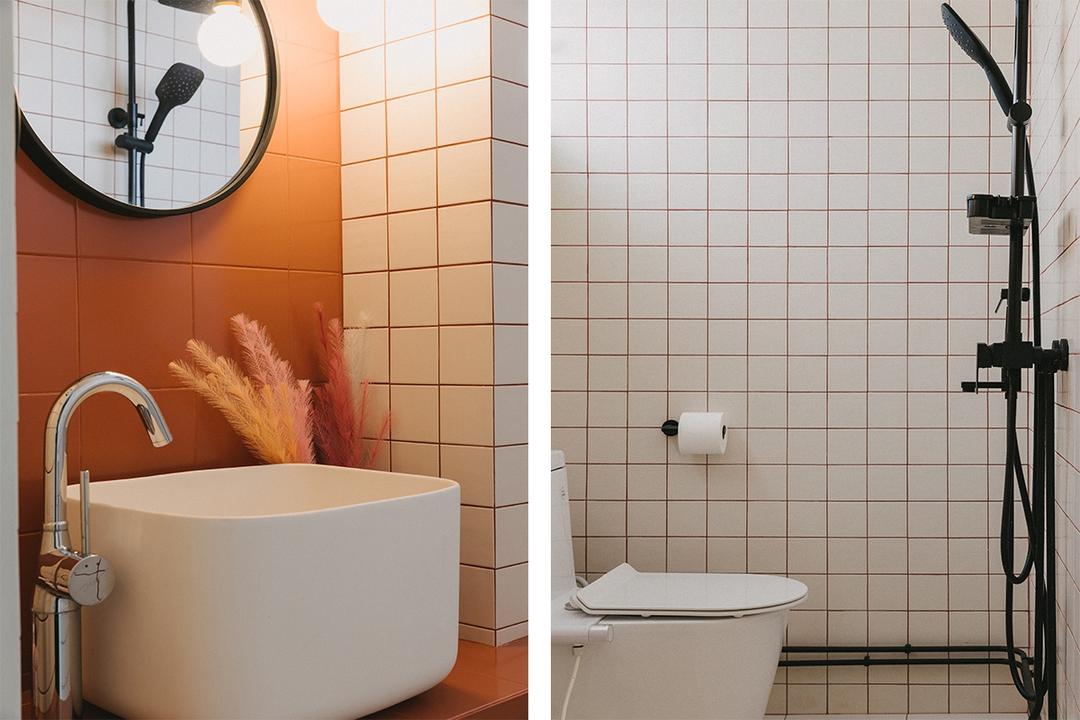 The common bathroom’s sink was sourced from a Thai designer, while the black shower set was found off Carousell.

J: I had to fight for these ceramic tiles! He (Shyan) thought they looked like the mosaic ones in swimming pools, but these were one of my non-negotiables since everyone we asked voted against my idea of a pink bathroom with flamingo wallpaper!

SY: Although the pink grouting looks nice now, it was quite scary at first. So, when we first got the keys, the walls weren’t washed properly and because of how the white tiles caught the colour, the whole bathroom looked like a murder scene. [laughs] We eventually solved the issue by cleaning the tiles with those magic sponges that you get from hardware stores.

About the master bedroom, walk-in wardrobe and en suite 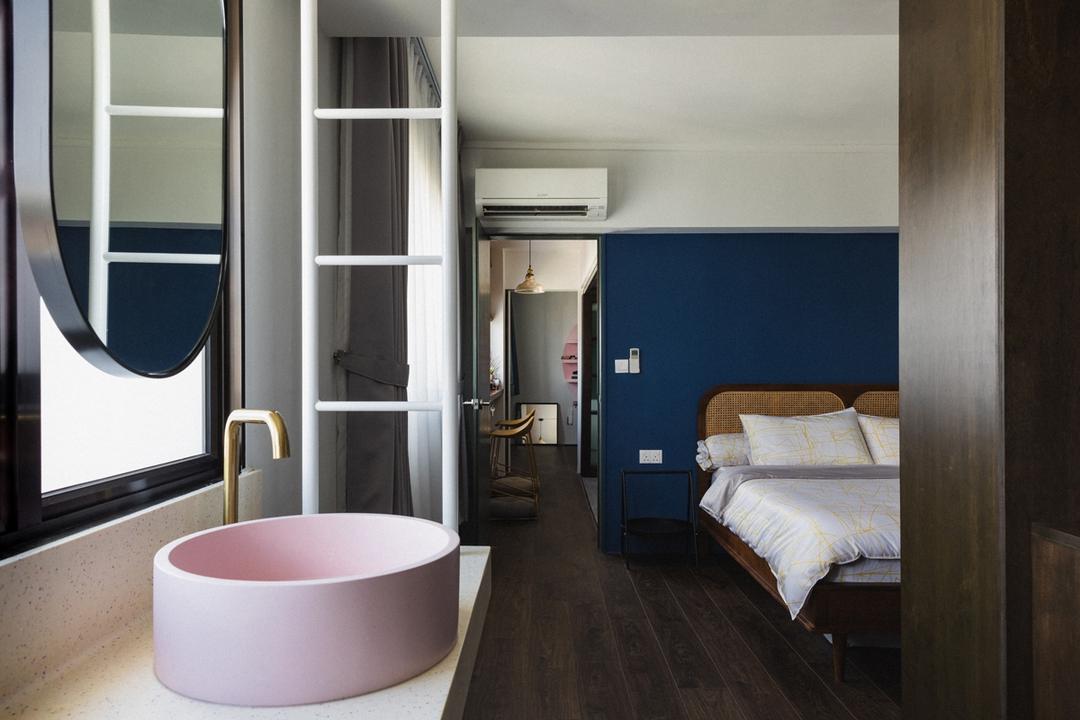 S: The master bedroom used to be two rooms, and we broke down the wall in between to make way for an open-concept walk-in wardrobe. We don’t have a TV in our bedroom because we wanted it to be a place for rest and even though there’s a shelf wall in front of our bed.

The bed itself was custom-made and we also got it from Second Charm. It has a rattan backing like the dining chairs. We chose blue for the headboard just to add some contrast, yellow was a colour that we considered also, but it would have been too much. 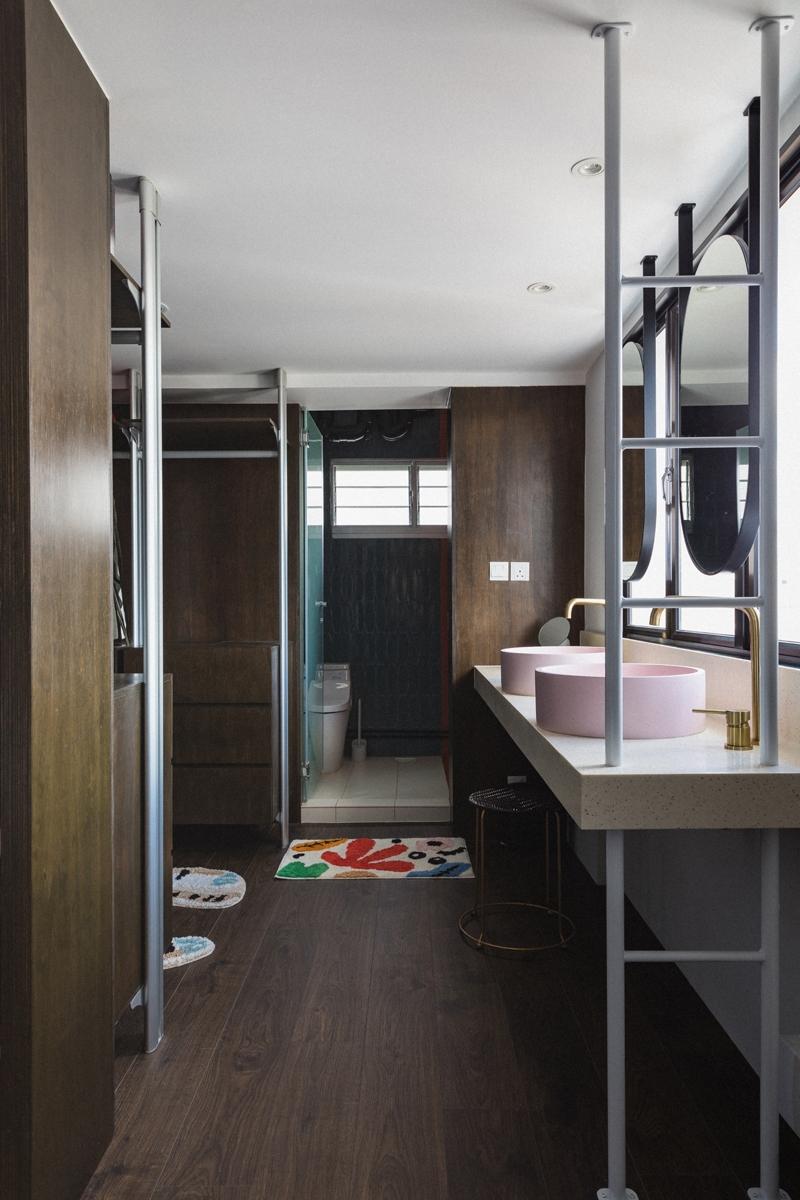 J: Before the renovation, the vanity was located inside the en suite, but we moved it outside so that there would be space for the bathtub – which is another one of my non-negotiables – and to have his-and-her sinks for each of us.

At first, I was very happy to find a Taobao seller who carried coloured sinks at a reasonable price, but it ended up being the start of a really long back-and-forth between us. 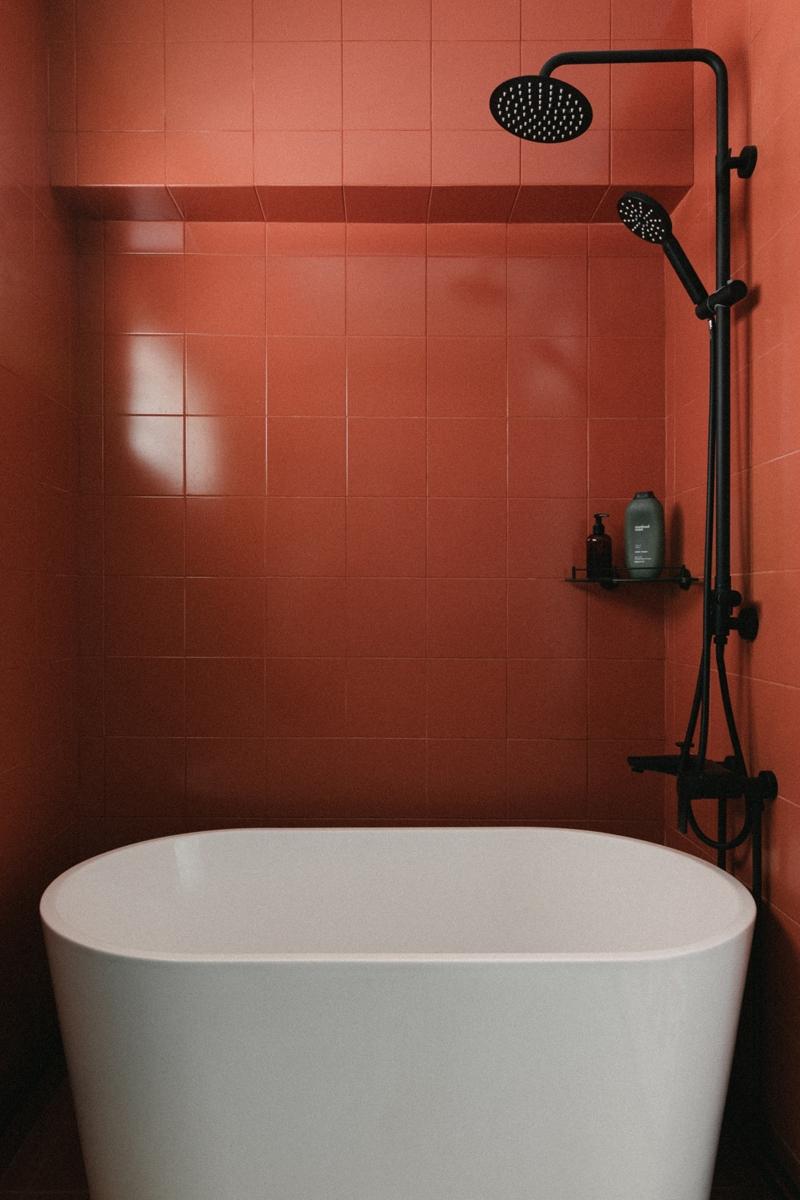 It was then that we got to know that there were colour variations between batches, and so to be sure we got two pieces that matched, we ordered two more. So, at the end of it, now we have three extra sinks that are at my mom’s house, and we don’t know what to do with them! [laughs] 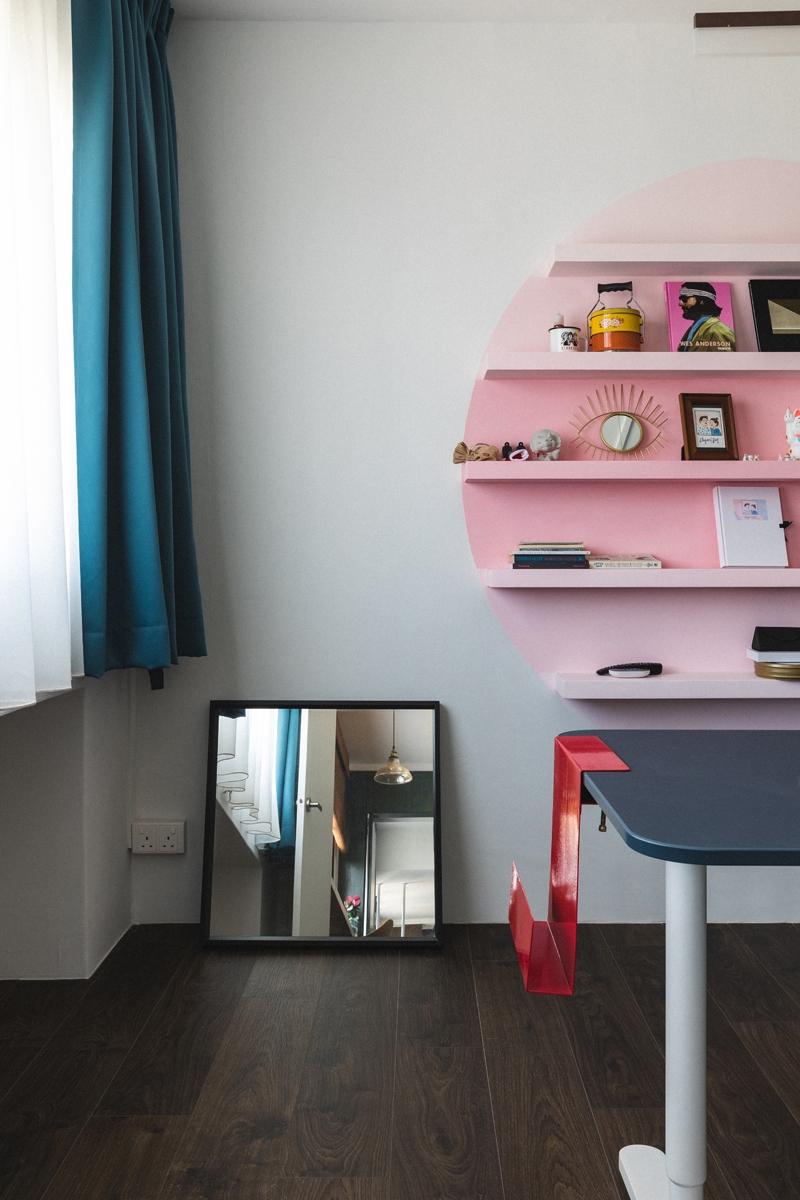 S: I love our home. Like when I’m not working, I don’t even want to step out. And I also like how design and functionality come together here, because I have seen homes which look like art galleries, but I can’t imagine living in a space where you have to be cautious all the time.

J: Yup, so everything is able to tahan the rigour of our everyday usage, but yet there’s this element of practicality to them. I think that’s what good design is to us, because a home should be functional. Otherwise, it’s just a piece of art.

Wish to bring out your personality in your home?

Let us help! Simply tell us your renovation requirements and we can get you personalised renovation quotes from five local interior design firms for free! 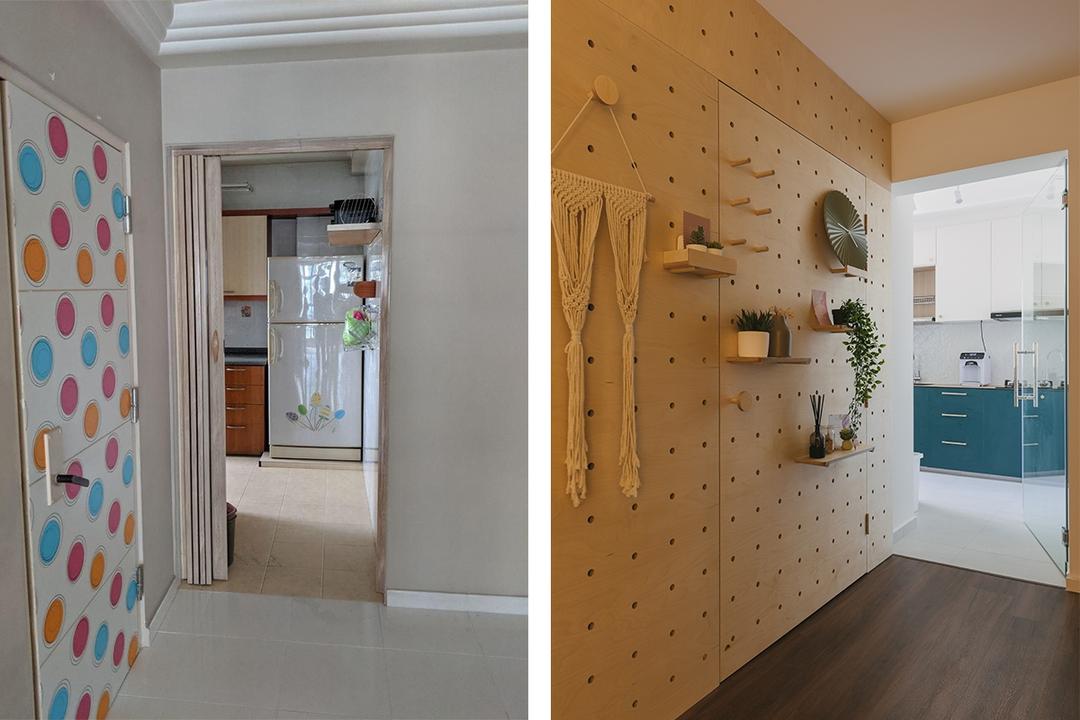 RENOVATION JOURNEY
Flat Shelter an Eyesore? Not Anymore in This Couple’s Home
After getting their new home at Jelebu Road, this couple found various ways to improve their 4-room flat including giving its household shelter a visual makeover. 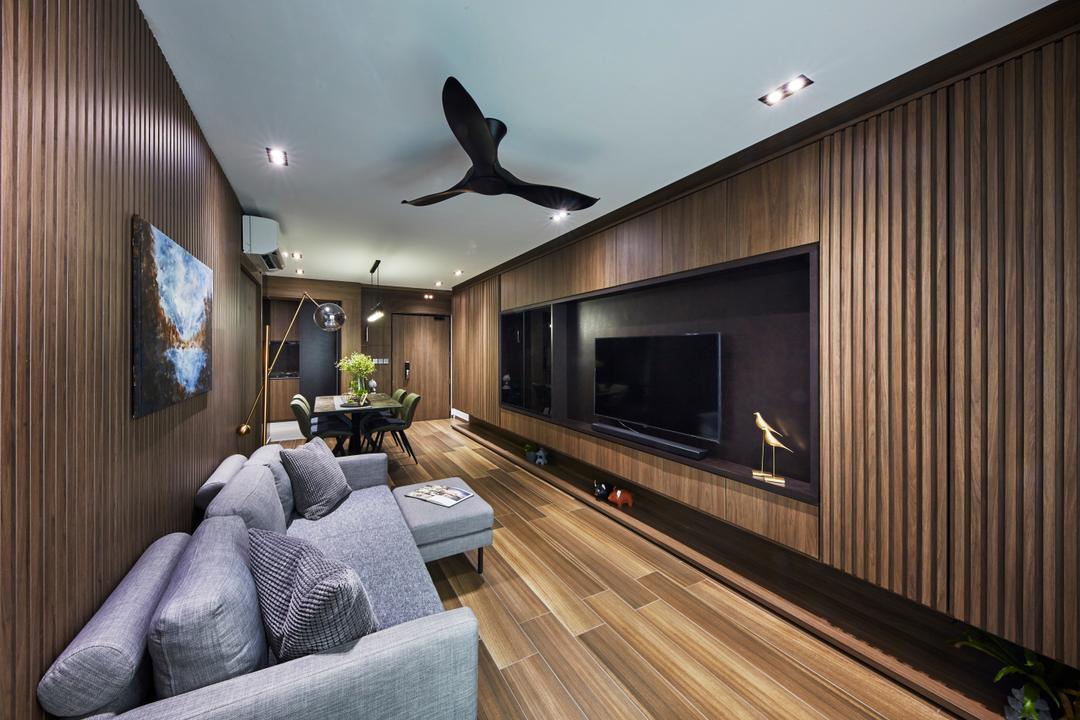 RENOVATION JOURNEY
This Designer’s Tidy 4-Room Flat Hides Everything with Wood
For The Interior Lab's Angie Ku, the key to building a low-maintenance but fully optimised home started with wood. Find out how she uses it in her own 4-room flat to cut down on time spent on cleaning up! 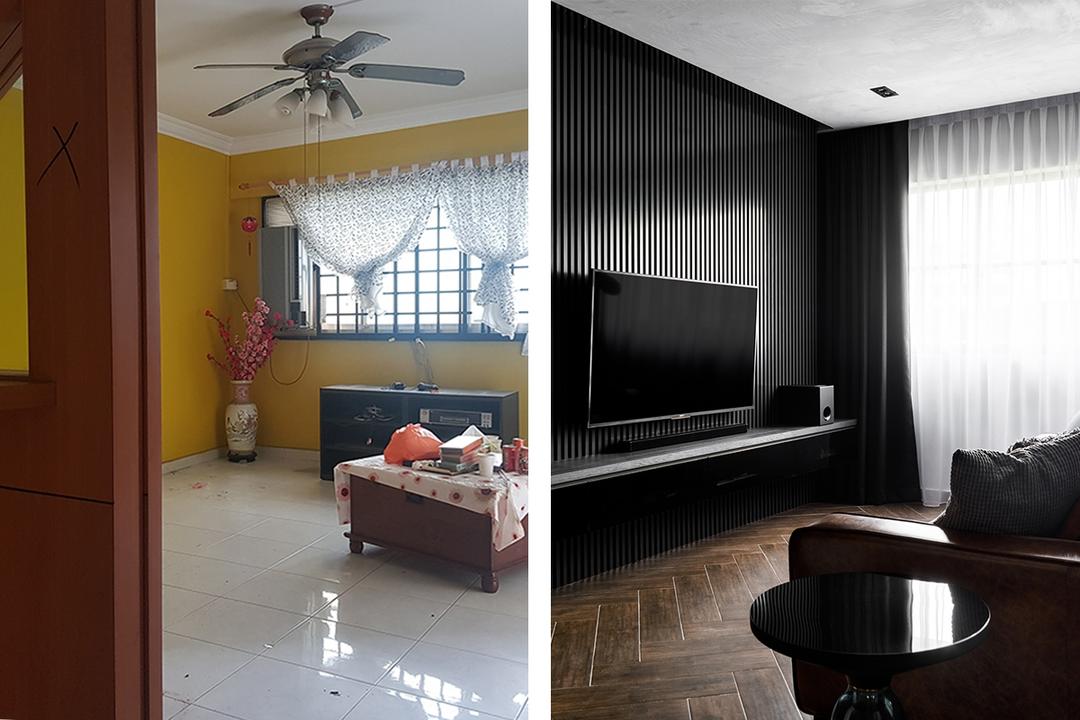 RENOVATION JOURNEY
This Designer’s Maisonette Has Enough Privacy for 3 Couples
A gut-reno isn't an easy task by any measure, but it was necessary for Fifth Avenue Interior's makeover of this HDB maisonette in Serangoon North that's home to not one, but three couples!
Preparing the next article…
Recommended for you