A complete restoration adds light and space to a once-dreary heritage home.

If you were to step into this walk-up apartment without checking out its exterior, you wouldn’t have guessed it’s part of a heritage building that’s over 80 years old. 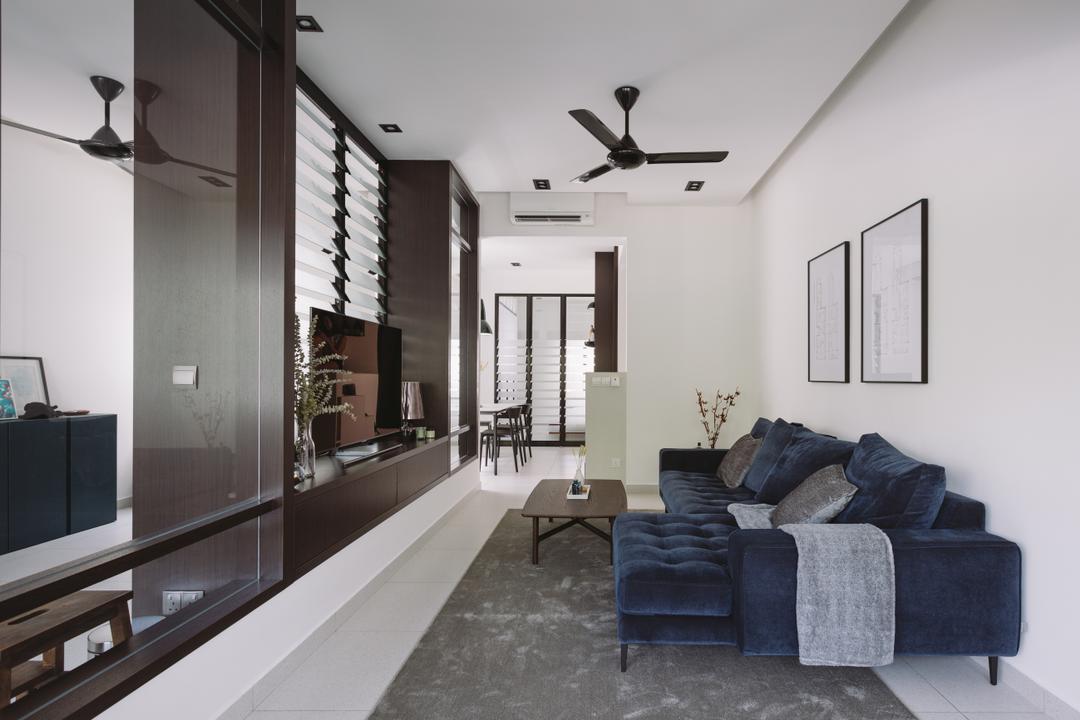 Freshly revamped, the inside of the house now sports a hip, new look that subtly hints at its storied past – clean and modern, but with original features which give it character, such as encaustic tiles and black-framed windows.

“I believe it was built by SIT (Singapore Improvement Trust) in the 1930s, so there’s really some history behind it,” says the apartment’s current owner, fashion merchandiser Denise, who shares with us how interior design firm Habit brought the past and present together in her home.

On her home’s look

Denise (D): Generally, I’d describe the layout to be spacious. I am in my thirties without kids, so looks-wise, the house is young and yuppie-ish. 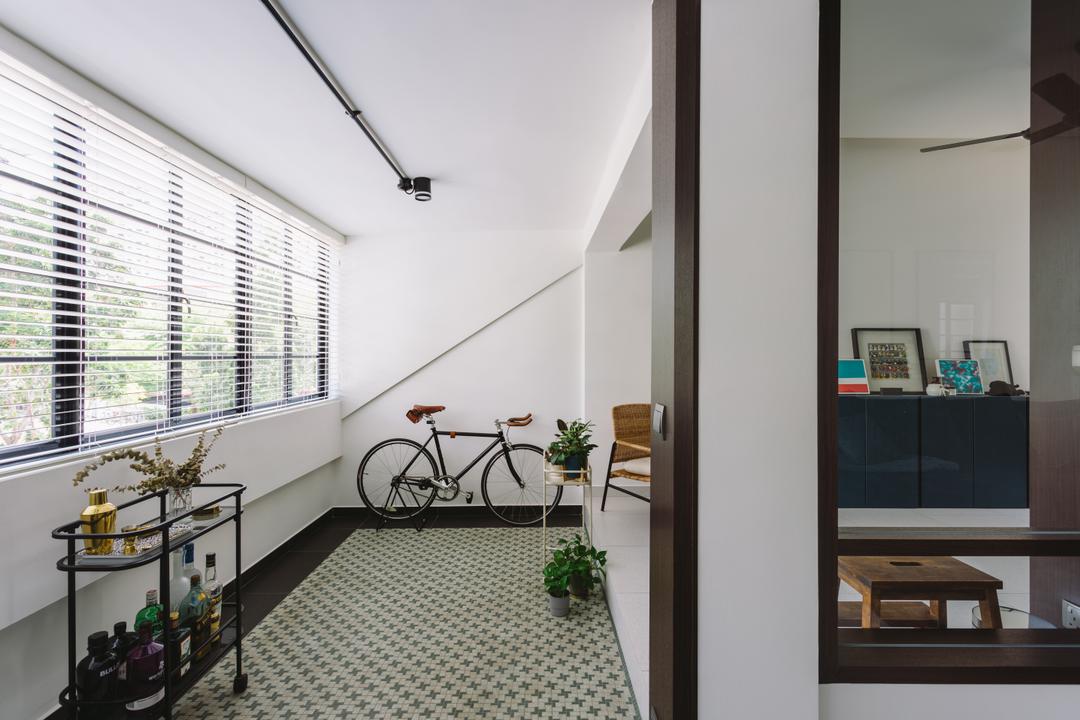 Habit was able to pull off this clean, simple, but not minimalist aesthetic that embraces all the tiny details which make this house special. I’d describe it as a modern-colonial look, like the black-and-white heritage bungalows, but with a contemporary spin on it.

About her home’s history

D: We bought the house from its original owner, who is an elderly lady. According to her son, both she and her husband lived here in the 70s. Subsequently, they moved out and the property languished for a bit, so Habit really had their work cut out for them. 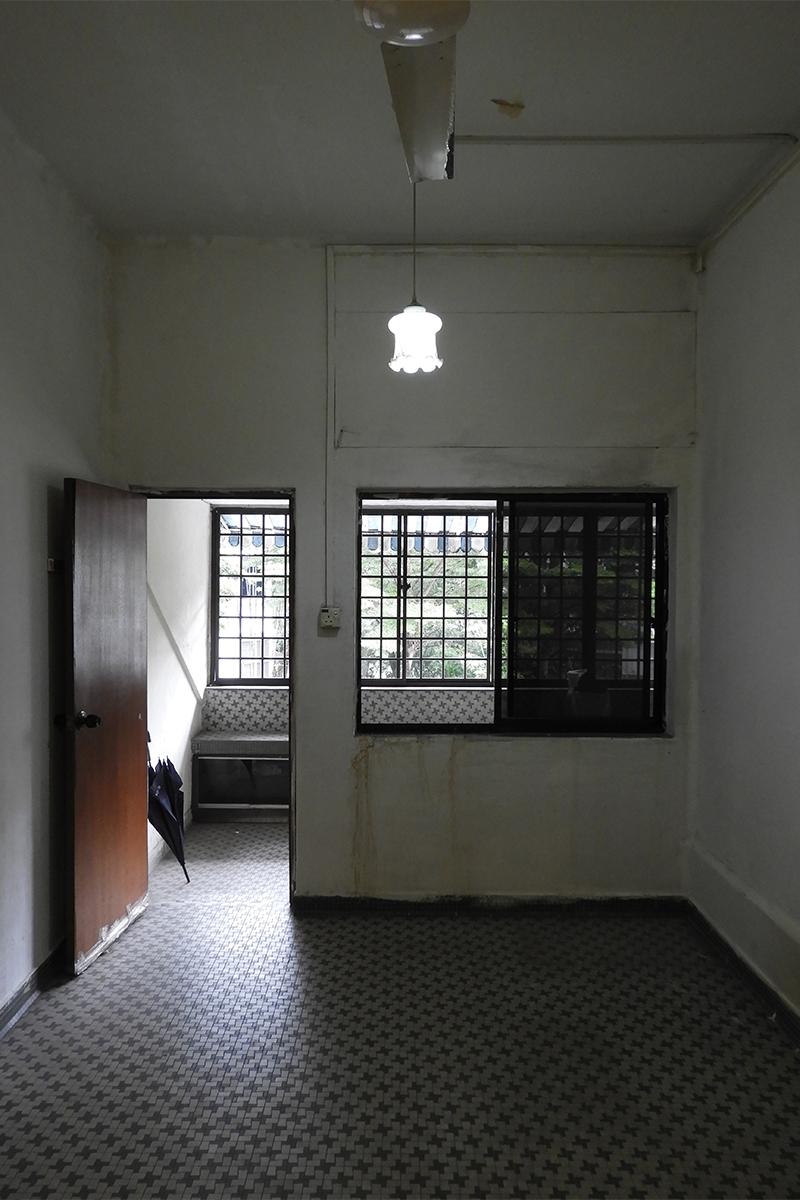 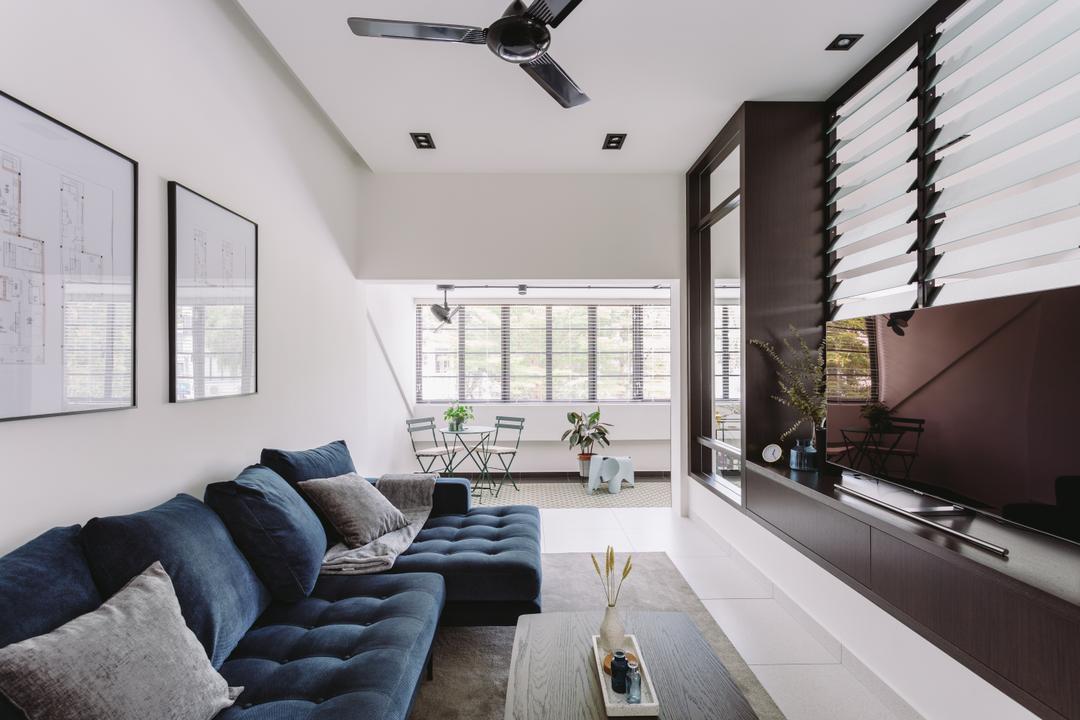 Before-and-after: Formerly a bedroom, this space is now an elegant living area.

Also, because it’s in a conservation area, Habit had to acquire some permits before they could do any work that would affect the facade – including installing new window panes, which had to fit the guidelines given.

D: My must-haves? Definitely storage. I travel quite a bit for work, so I’ve plenty of suitcases and other travel items that I need to stow away.

In terms of materials and workmanship, I wanted things to be of high quality and to be able to withstand daily use. Like for instance, I ended up choosing tiles for the floor, even though a hardwood floor – which is harder to upkeep – would have been nice. 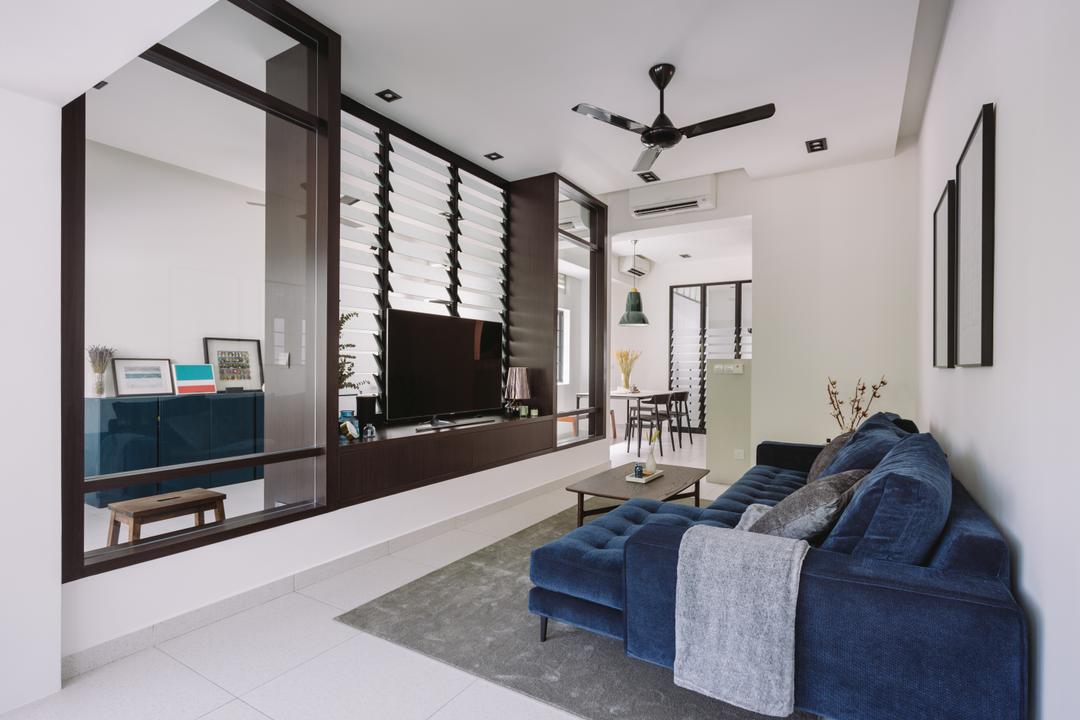 On changes made to her home

D: In a more long-term view, I am probably going to rent the place out, and it’s partly why we kept the living area separated into two zones or ‘rooms’, the actual sitting area and a yoga/exercise space.

Actually, they were two separate bedrooms, but we requested for the original walls and doors to be knocked out to allow more natural light to enter. There’s also the TV feature wall with louvered windows, which took the place of the partition wall between the original bedrooms. 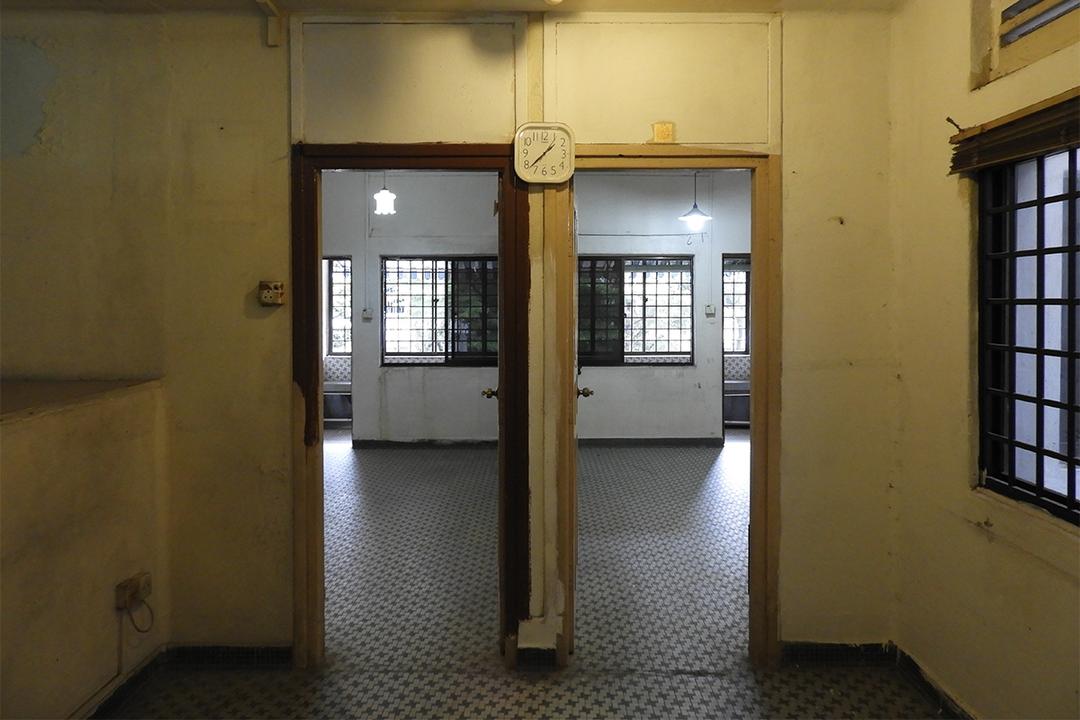 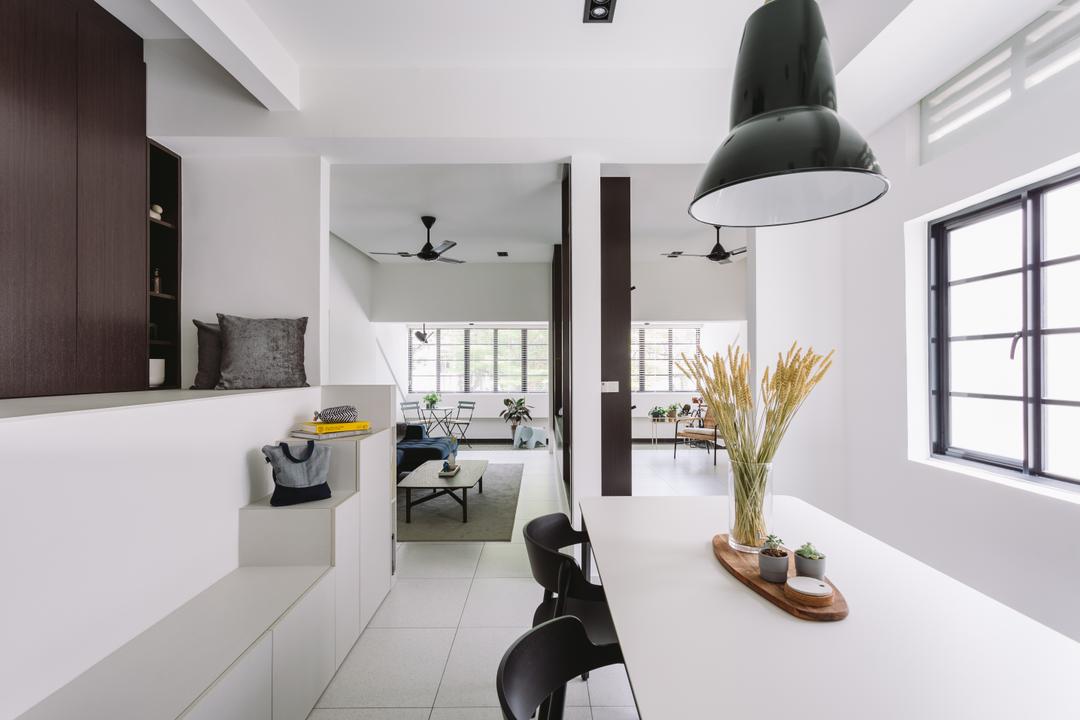 Before-and-after: Former bedroom entrances that now lead into the living and yoga room.

For the platform that’s right beside the dining area and main entrance, I decided to transform it into a cosy corner. It’s actually a structure which prevents cold air from the air conditioner from escaping the house to the main street via the apartment’s stairway.

What Habit did here was to reinforce the structure and install a small flight of stairs that also double as shoe storage. 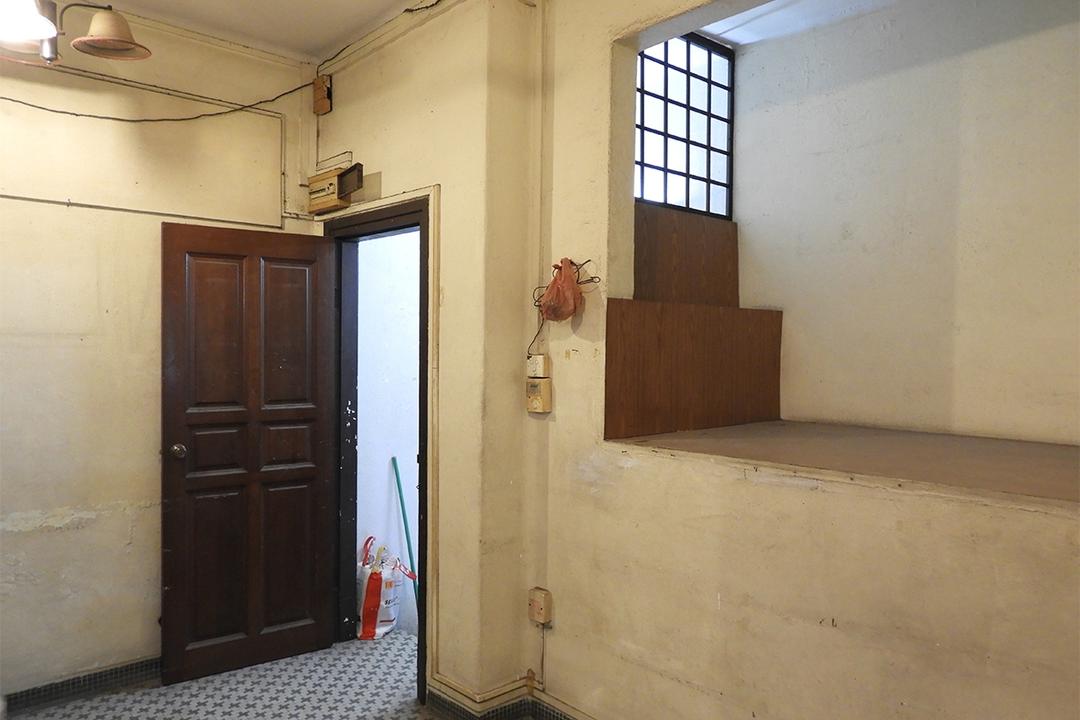 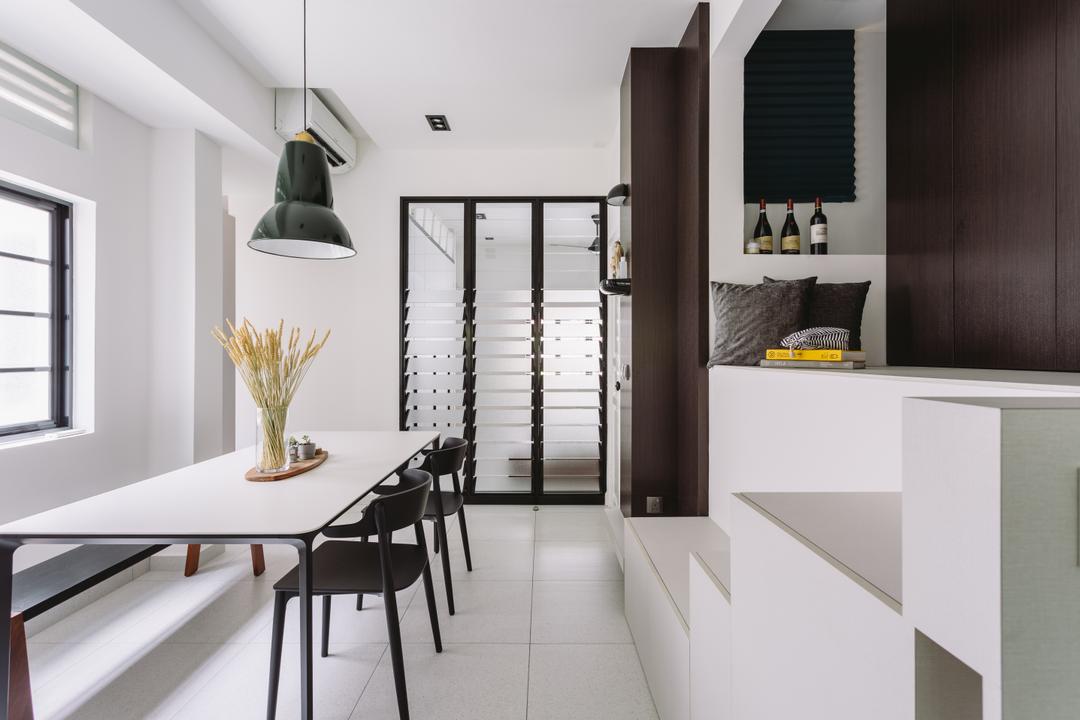 The louvered windows bordering the bedroom look into the dining area, and they help to ventilate and brighten the space outside.

At first, I thought about installing a see-through glass wall, but decided against it. That’s because the windows in the bedroom (which open to the outside) and those in the kitchen/balcony are located along the same stretch of space. So if I were to open all of them – including the louvered ones here – that allows the whole house to be ventilated. 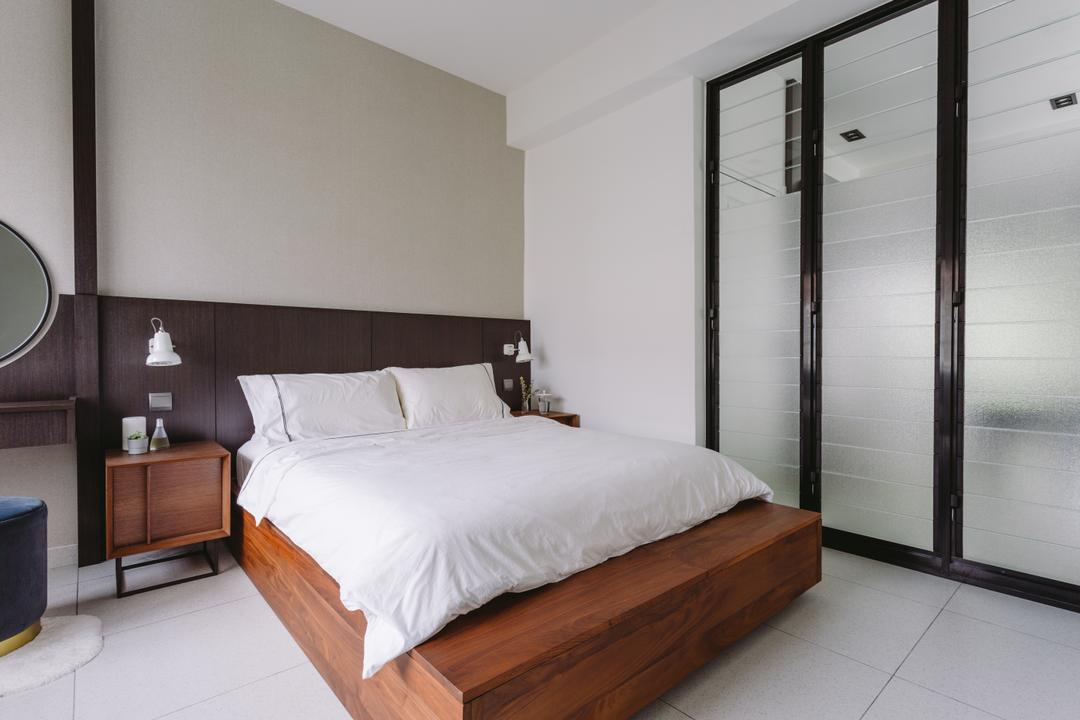 At my request, Habit also put in a custom vanity in the master bedroom. I had looked high and low for a loose piece but couldn’t find anything that would fit the space.

In the end, Habit ended up designed one that matches the space perfectly; I like how its wood tones increase the warmth factor of the bedroom, just like the bed frame and side cabinets. 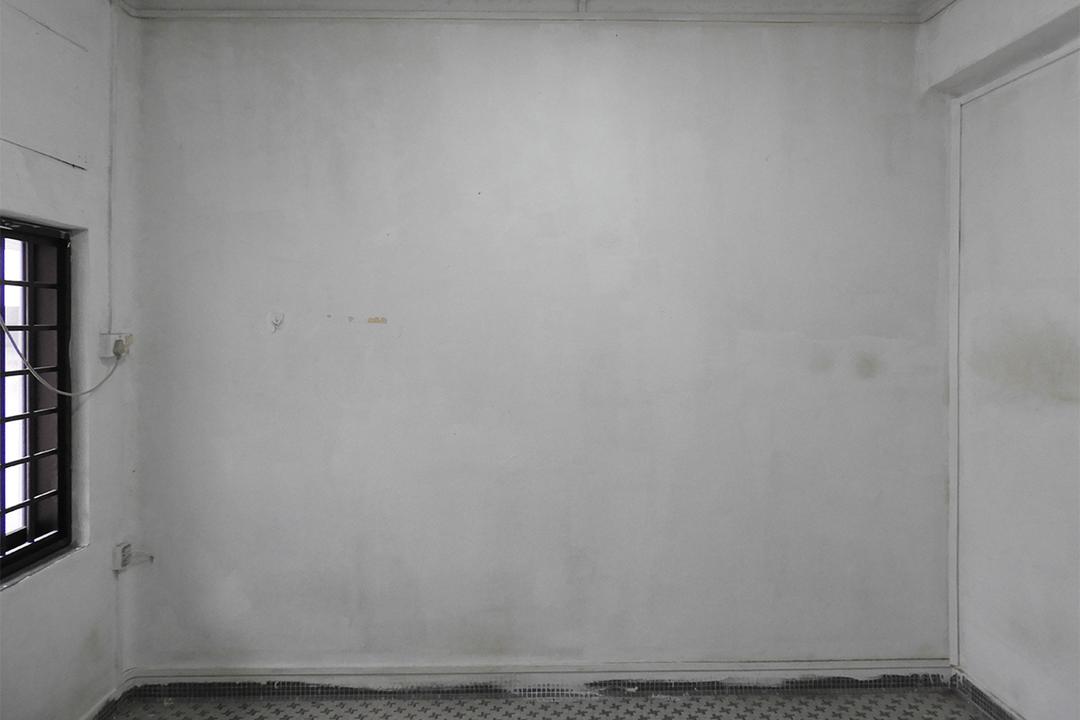 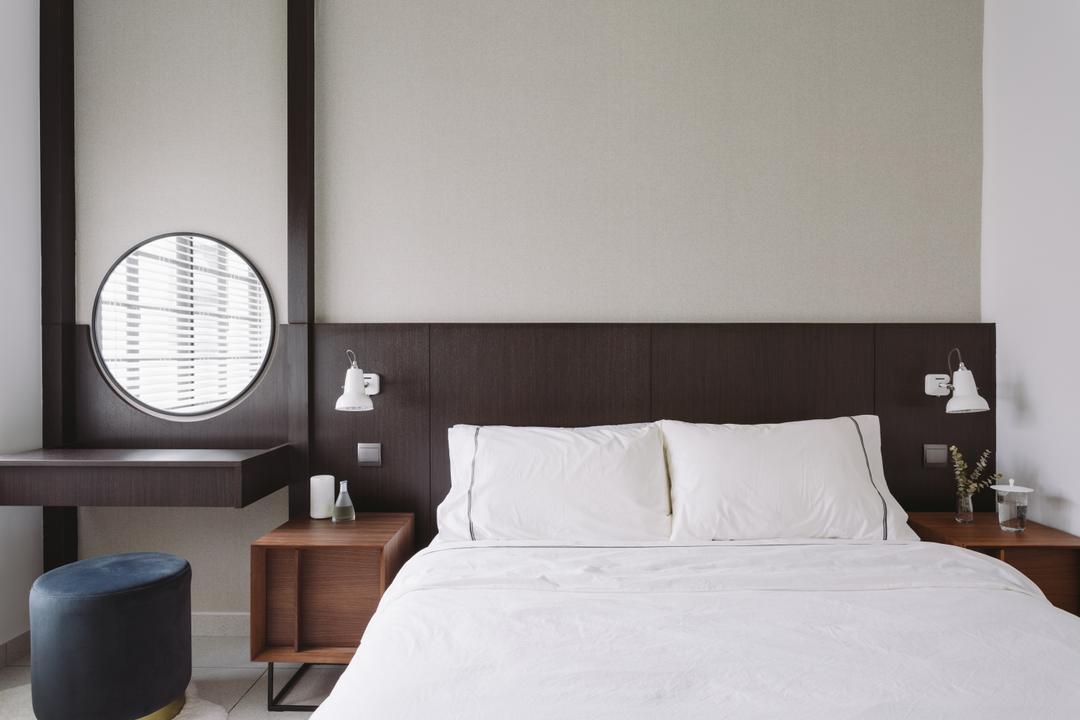 In the kitchen, there’s a backdoor that goes down a staircase. It’s something of a retro feature that came with the house.

As for the fittings, Habit noted my requirements for two sinks: one for cooking, and the other for laundry. They also installed a little sliding door, which can be used to hide away the washer-dryer. 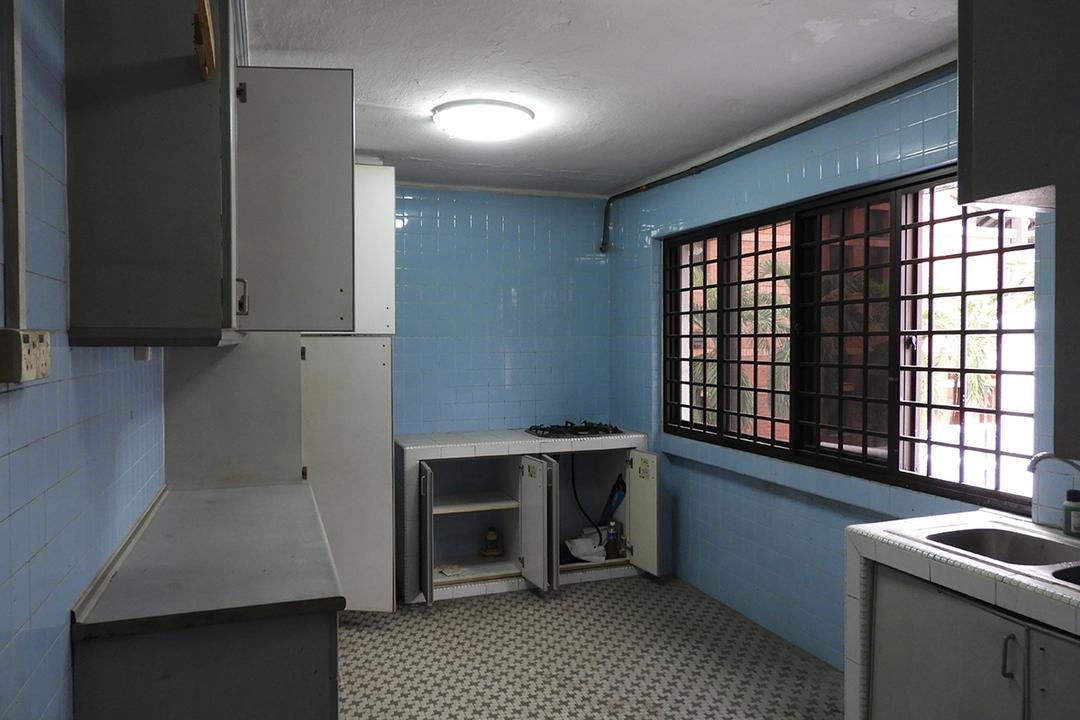 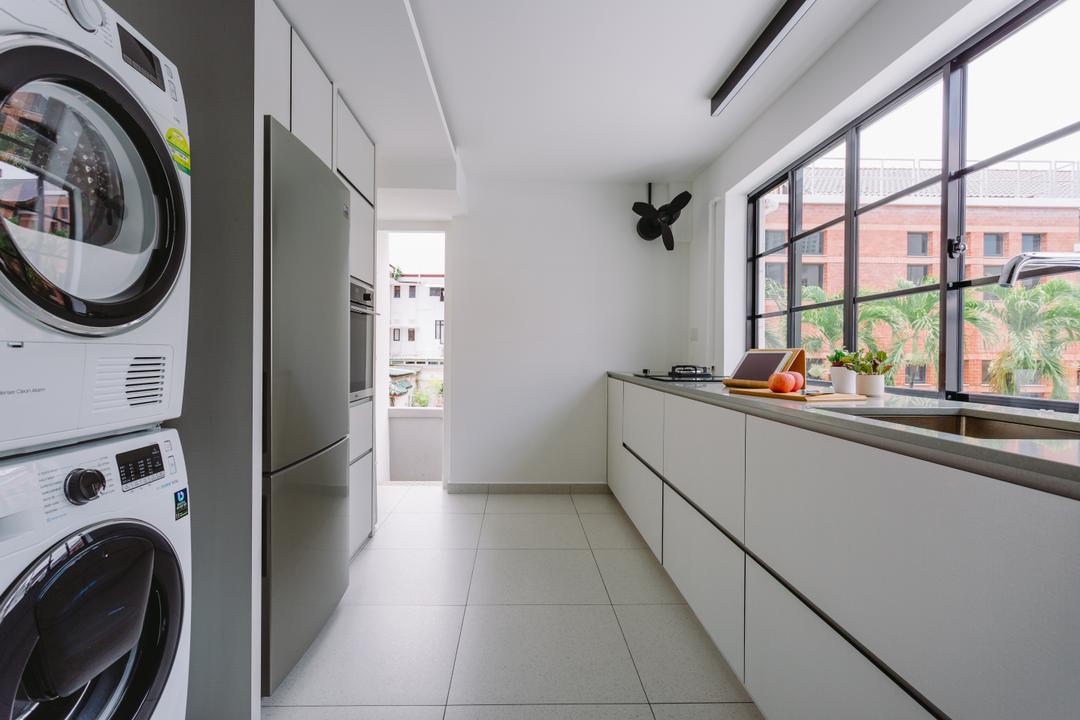 Before-and-after: The kitchen, now spruced up with a new colour scheme.

This is an old-school home, so there’s only one bathroom in the entire house and it’s located in the kitchen. There’s a separate space for the shower and the toilet, and Habit used black frosted glass to cover both up. 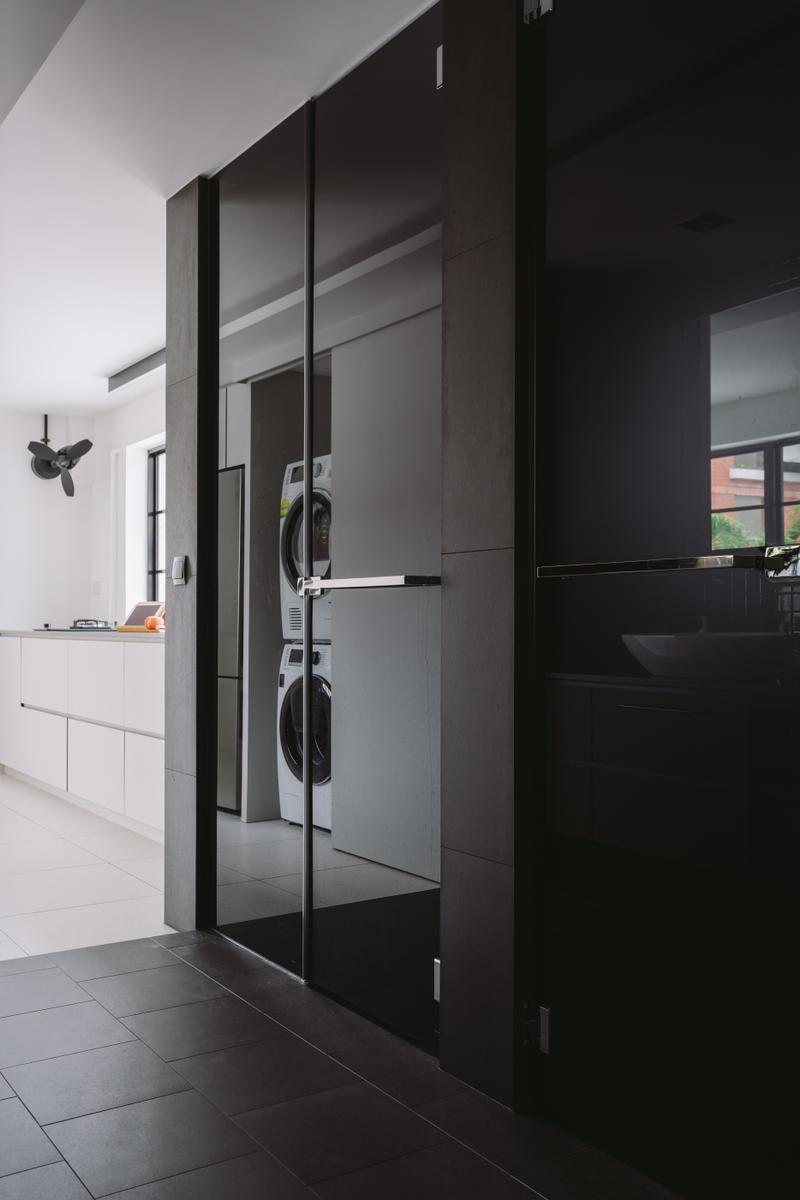 D: Naturally, because of how old this house is, all the water pipes, wiring, and other internals had to go because of age, but the challenge, really, was the bathroom!

In the process of changing out the squatting pan, Habit discovered that the piping also ran through the ceiling of the home downstairs and completing the job required creating a hole through it. In the end, we went ahead with the swap, and I paid for my neighbour’s repairs. 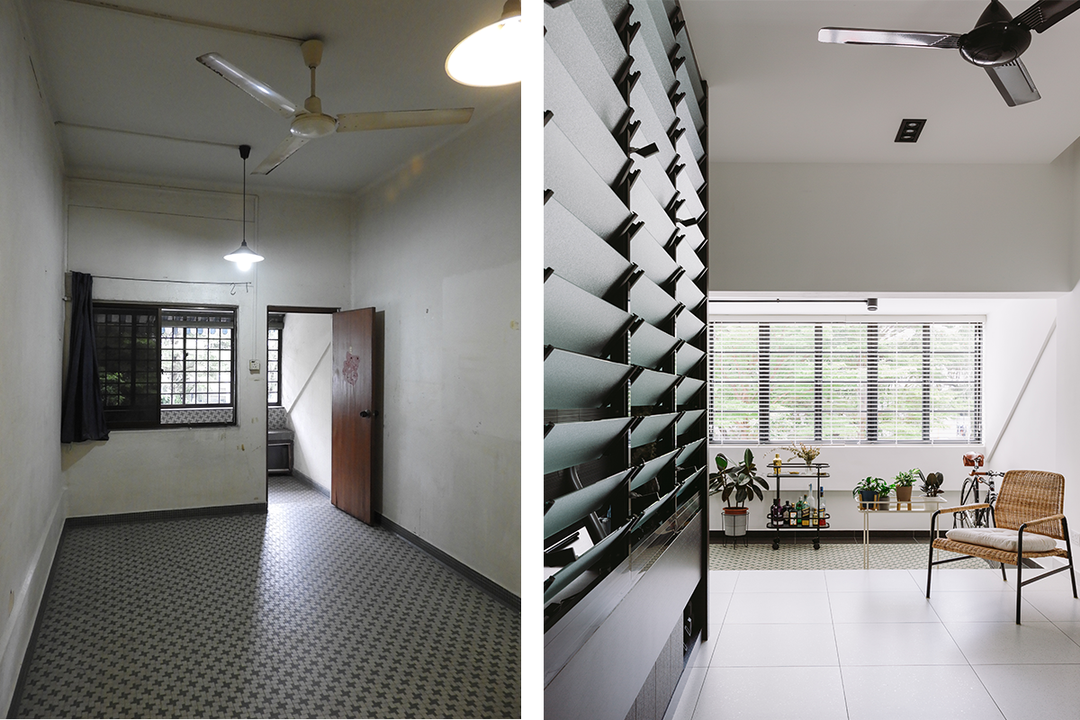 Before-and-after: The yoga room’s and balcony’s transformation. Here, some of the original floor tiles were kept intact as a call back to the past, thus giving the space a unique character

There was also a stump or immovable bit of wall, about 40 cm high, which runs between the current living area and yoga room.

The original idea was to have a larger living area, but because of this obstacle, that plan fell through. So in the end, Habit built the ventilation/TV feature wall over the stump. 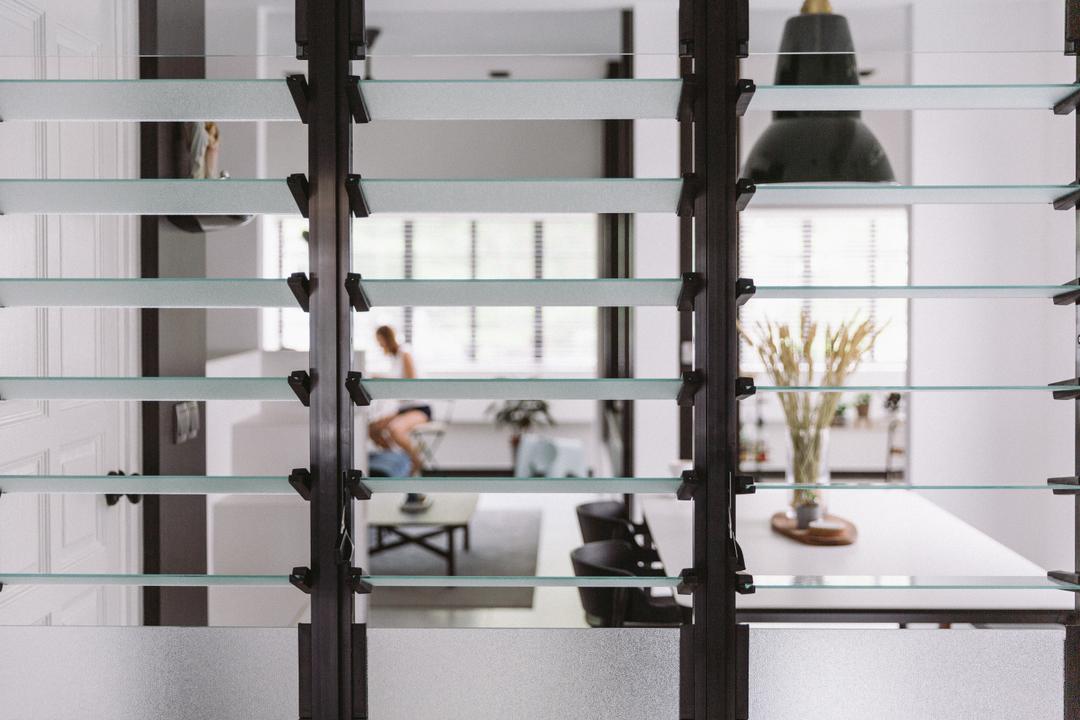 D: Renovating this home made me realise how important it is to work with an experienced interior designer like Habit because a less-experienced one would be asking, “what should we do now?”, if they were confronted with difficulties like the sump and toilet.

The team at Habit really handled these challenges like champions; they have the intuition, technical know-how, and design capabilities to bring your design ideas to life. All things considered, I am very, very happy with the house; it’s bright, it’s airy, it’s cosy, exactly just like what I asked for.

Do you want your house to look like a feature-worthy home too? 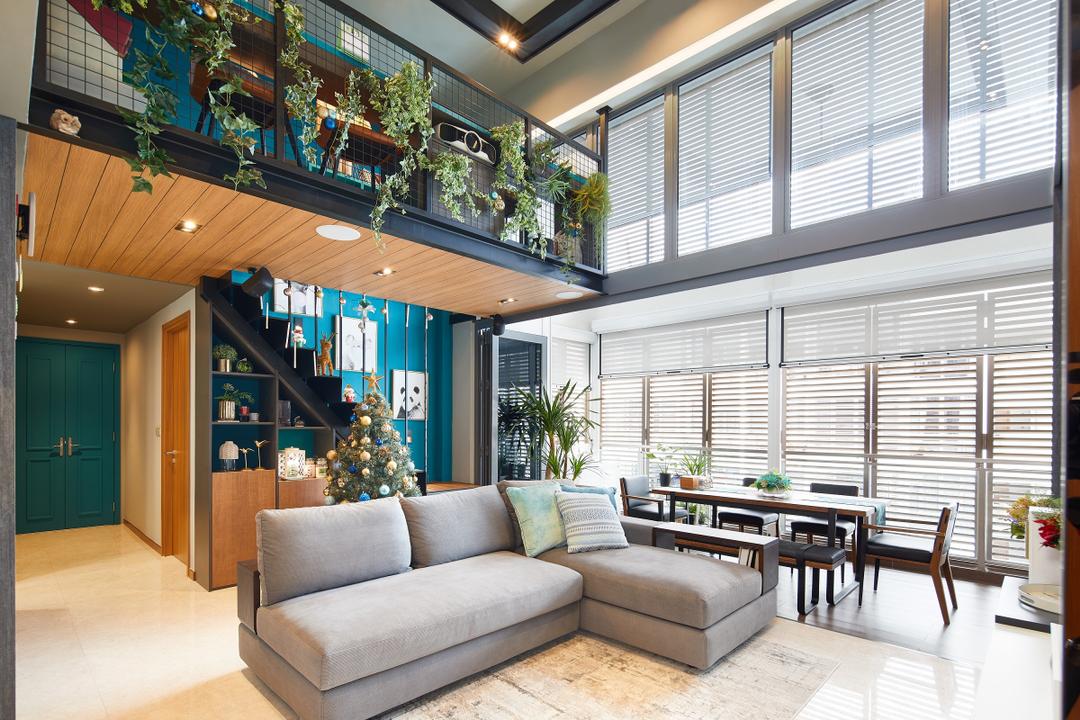 RENOVATION JOURNEY
This Family’s Mod-Industrial Home Has Its Own Mezzanine Loft
Worked on by interior design firm Black N White Haus, this family home has both good looks and an impressive indoors mezzanine going for it. 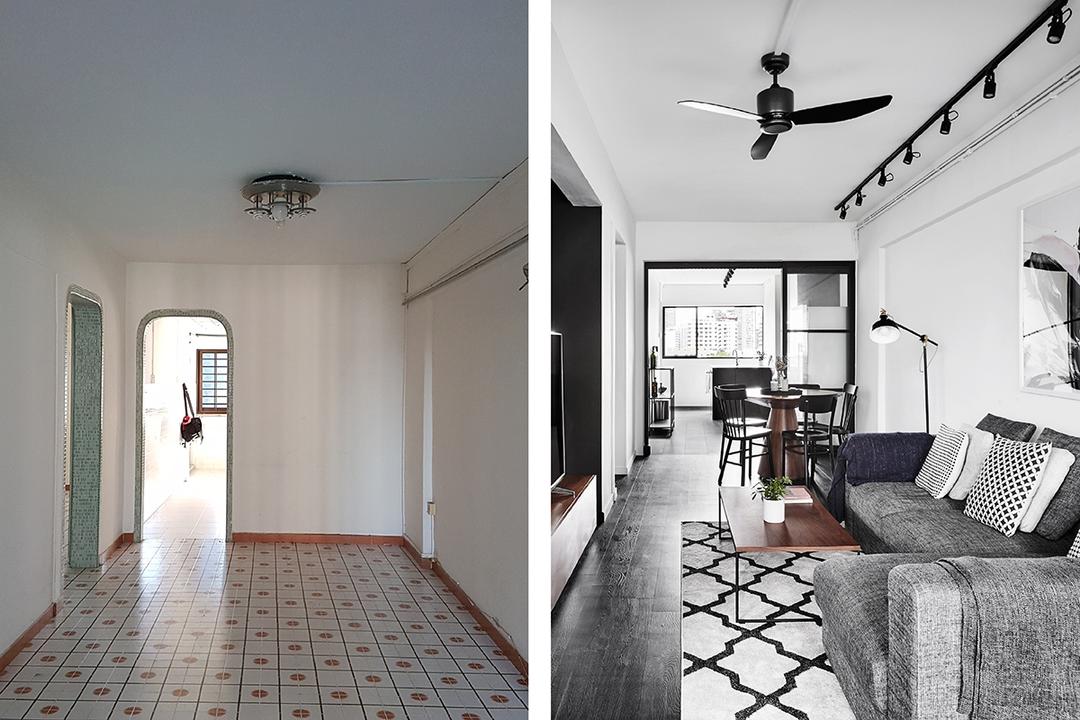 INSPIRATION
Before-and-After: How 5 Homes Went from Plain to Perfect
Beautiful houses don’t start out the way they look like now – here’s a behind-the-scenes look at the (almost) magical renovation of 5 Singapore homes. 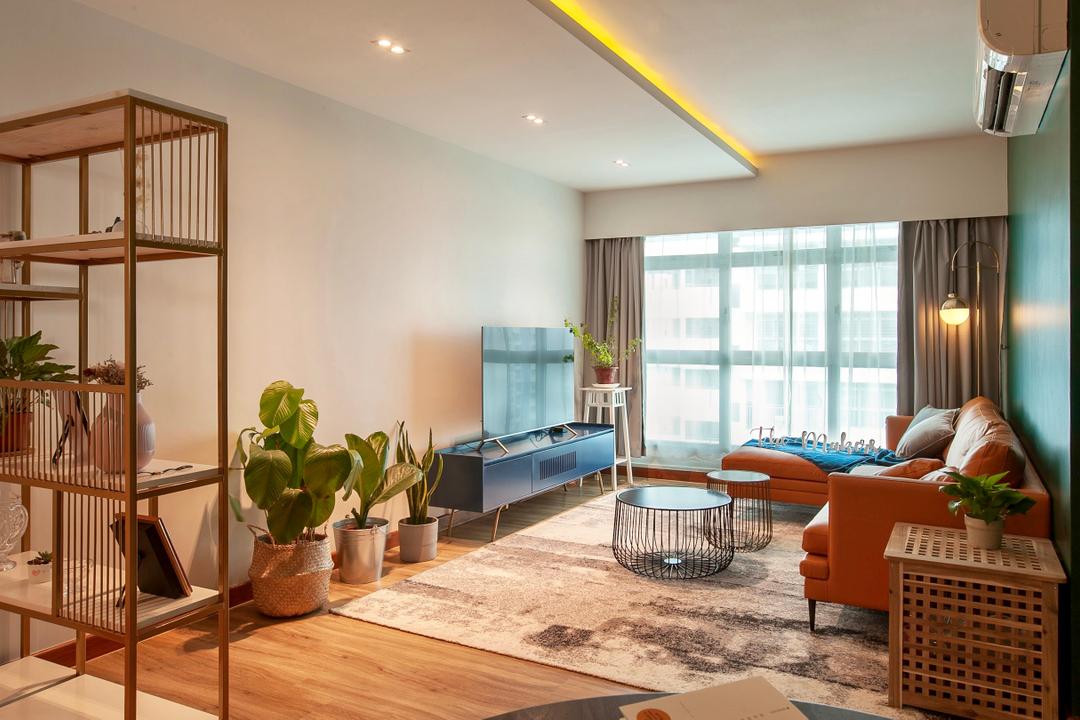 RENOVATION JOURNEY
This Lively HDB Home is Every Colour Lover’s Dream Come True
Featuring a soft, but vibrant palette of pastel colours, this Punggol HDB home belonging to a pair of Chinese expatriates is anything but bland.
Preparing the next article…
Recommended for you