Verified reviews are cross-checked against their renovation contract.
Review of South Park Design Work was within expectation but not the experience

We have chosen this company through a referral. It was actually halfway through a friend’s home renovation that we decided to use them. The initial interior designer was Hayden, but shortly after the project started, Hayden left the company to start his own. I was not given a choice but to stay on with SP. My friend’s home renovation was going on well initially when I signed the contract with them. But subsequently there were some hiccups. But I told myself that all renovation there will be hiccups as long as the ID is around to resolve it. We felt that we had the initial chemistry but the relationship didn’t exactly turn out too well. Pros: Tiling was done well Carpentry was done well Willing to help out in various task not within the contract, i.e. fixing my dining table, fixing shelves etc. Cons: Painting was bad. Plastering was horrible. Even after 3-4 rounds things were still not done well. Project completion delayed for more than 4 weeks. Was suppose to be done by mid November (but I gave them 2 extra weeks to have it done up by end November). I was only able to move in on Christmas Eve. And there was still work needs to be done subsequently. Not much ideas for design, most have to depend on us. They are not the cheapest but at the same time not the most expensive quotes we have gotten. Overall the whole house renovation turned out within expectations but the experience was not good. I had to do a lot of chasing, a lot of brainstorming with my Wife and Friends, not much help was rendered for the design. It does feels like I am hiring a contractor instead of a Interior Designer. I have to think of my own solutions, getting ideas from magazines and internet. The IDs ideas are a little backdated and the designs are not original (these is after the first designer Hayden left) I remembered I was shown a project which was done up with modern Victorian but the design feels quite yesteryears. I had a few heated argument with them as there were some works that were done really badly, i.e. plastering, painting, polishing of parquet. I had to do daily checks myself as they can get too caught up with other projects that they forget instructions/discussion that we had before. My take is, if you have the time to be there everyday to supervise and you have the ideas yourself, you can use them. Their sub contractors are good, i.e. tiler, carpentry, electrician (but not their painters or plasterers) I am a working professional and I do not have the time and liberty to drop by everyday. Hence it was really painful for me to go through this whole renovation works. Special thanks to Bryan & his team designers. They are very responsible, patient & reliable. Amazed with their professionalism & good workmanship! Bryan is well versed in his technical knowledge and has a great sense of aesthetics. Bryan offered great design ideas, and also took into consideration our preferences and requirements.He also presented lots of ideas and suggestions on how to save costs. Highly recommend to whom looking for an ID! 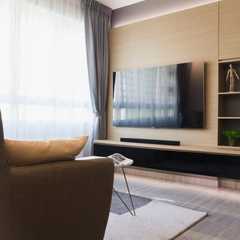 With Bryan & his team, we are able to have a nice, comfortable home in time for my Son wedding! Thank you for the great job, and deliver within such short time frame. Bryan not only able to ensure quality workmanship, also able to proposed alternative, care enough to include “fongSui” suggestion (able to read customer preferences) base on my needs. Most importance work within my Budget and short time frame given which none of my other tenderer can meet. Bryan has a great team!

Meet only reliable firms
Connect with an interior firm on Qanvast to be part of the Qanvast Trust Programme and enjoy perks!