Renovation Journey: Getting Into Character

• Nigel, Louise and their cat

Impressed with the creative ideas of the designers – from the ergonomic design of the kitchen to the study room that would make any booklover envious - Louise and her husband, Nigel, decided to engage Teck Soon and Widya from AD. I. WRKS. 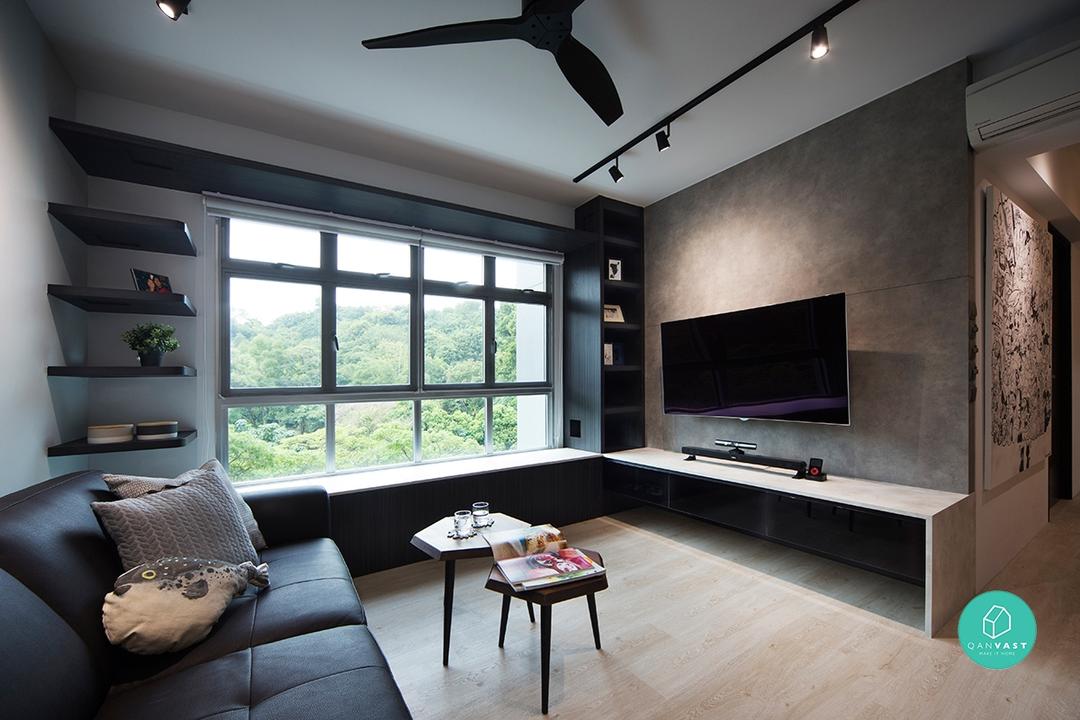 Qanvast: What vision did you have for your home?

Nigel (N): We wanted a Scandinavian home with space-saving solutions that will be easy to maintain. However, we did not want it to look like the cookie-cutter Scandinavian homes that we saw in magazines; we wanted an urban edge to it. That's why we stuck to greys and dark colours, contrasted with light coloured flooring. Our home also had to represent the both of us and be a safe space for us to unwind and relax. 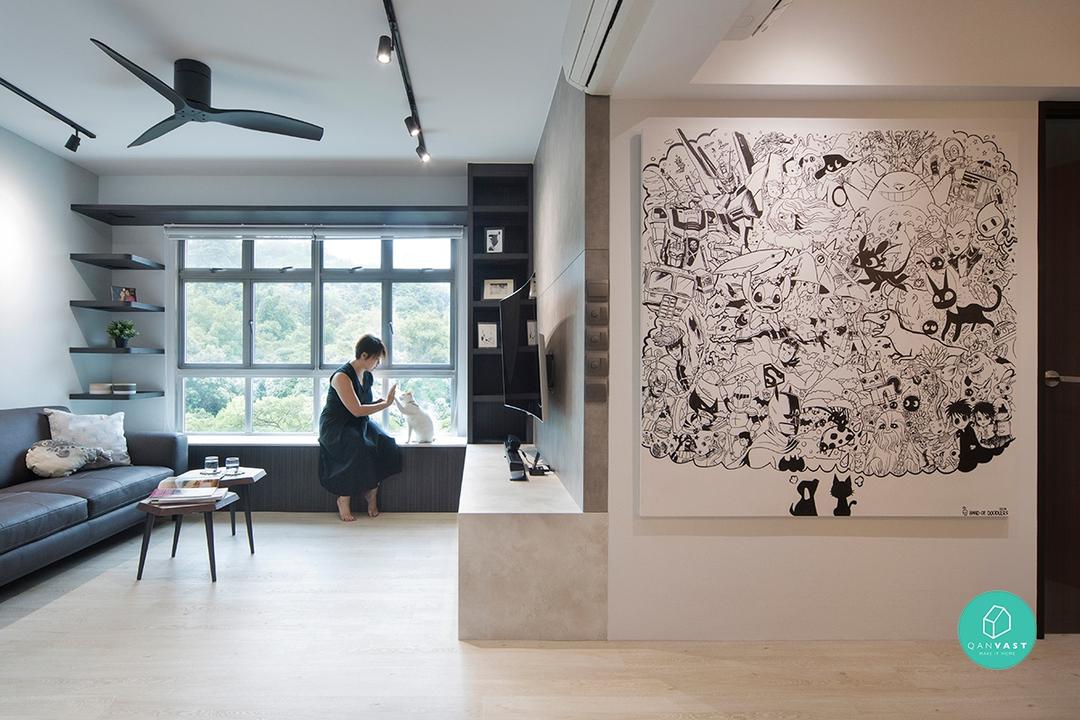 Qanvast: Why did you decide to engage the services of the team at AD. I. WRKS?

Louise (L): It was a toss-up between eightytwo and AD. I. WRKS as the designers that we had met from these two firms really impressed us with the effort that they put into their designs. We liked eightytwo’s minimalist concept as it featured a lot of clean lines. However, there were certain parts of their aesthetic that was outside our budget and we felt that it wouldn’t be fair to the designer, Alex, if we asked him to compromise and sacrifice some of his design ideas.

N: In the end, we went with our gut and decided to go with AD. I. WRKS because we were very comfortable talking to them. 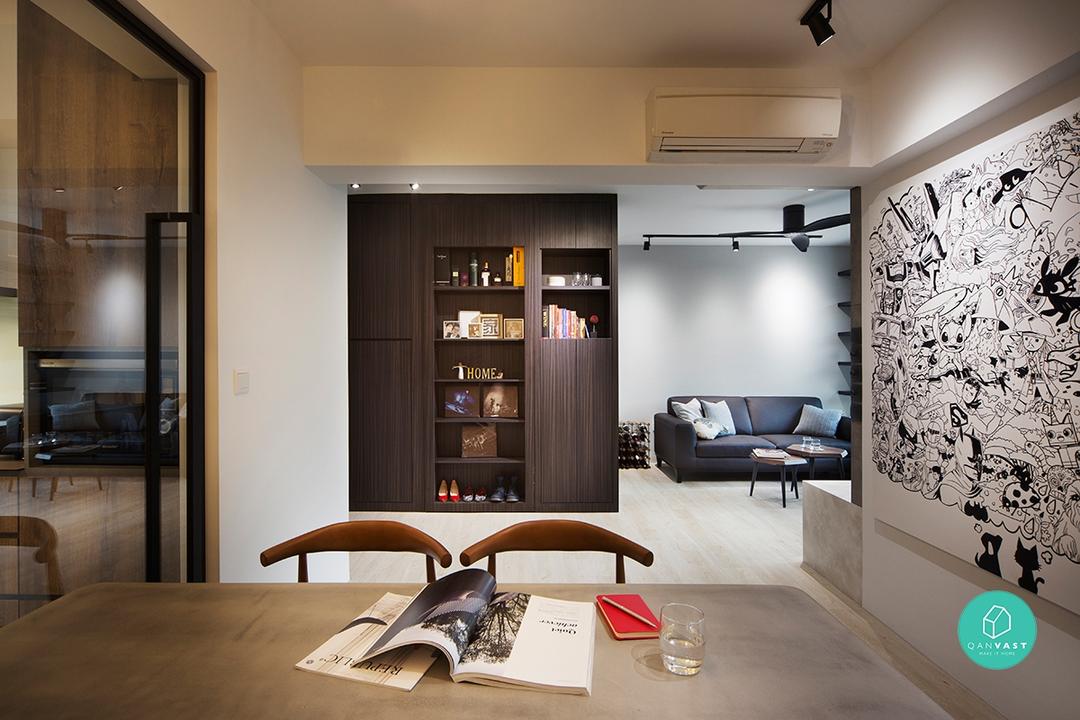 Qanvast: How did Teck Soon and Widya stand out from other interior designers that you had met?

Qanvast: Can you share more about the creative ideas for your bedroom and study room?

N: Unlike the other interior designers who did not want to knock down any walls, they wanted to expand the master bedroom by knocking down a wall and rebuilding it such that the bookshelf in the study room and the headboard in the master bedroom would form the replacement wall. 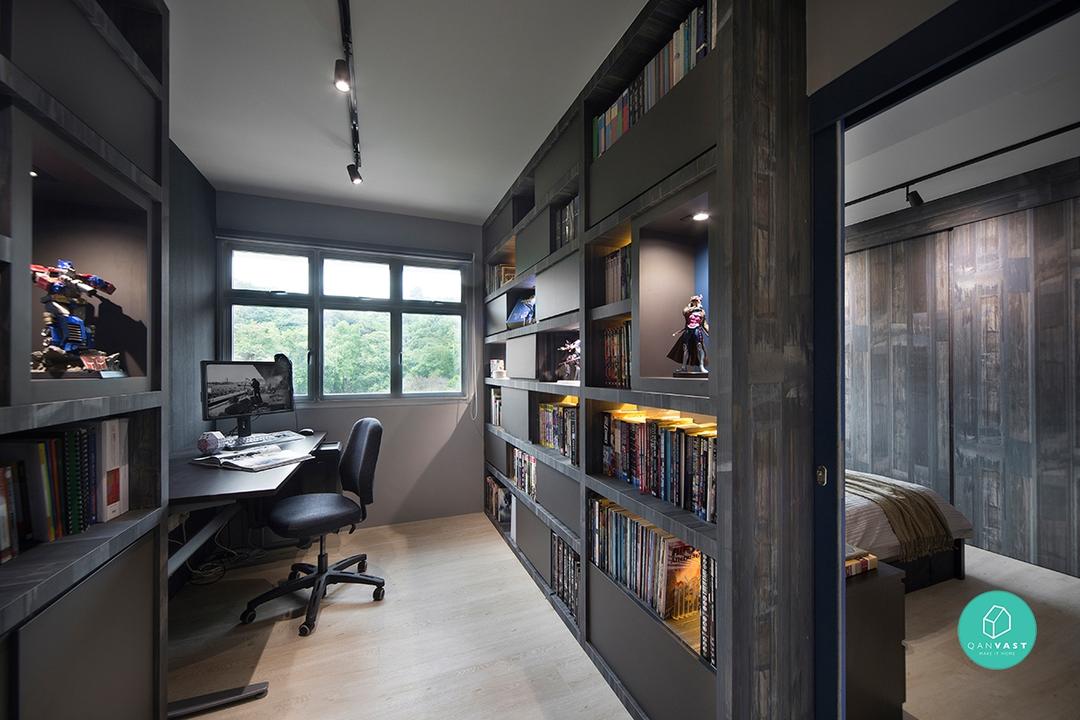 This covered up the original master bedroom door so that they could put a standing dresser for Louise, which was a good idea as she likes to stand while doing her makeup.

N: Yes, we were very engrossed when we saw their designs. We also liked their assertiveness when it came to sharing their design ideas with us. For instance, we originally wanted a walk-in wardrobe in our bedroom, but Teck Soon and Widya suggested that if it was space that we wanted, they could knock down the wall and use that space to turn the whole wall into a cabinet so that it will double up as a feature piece. 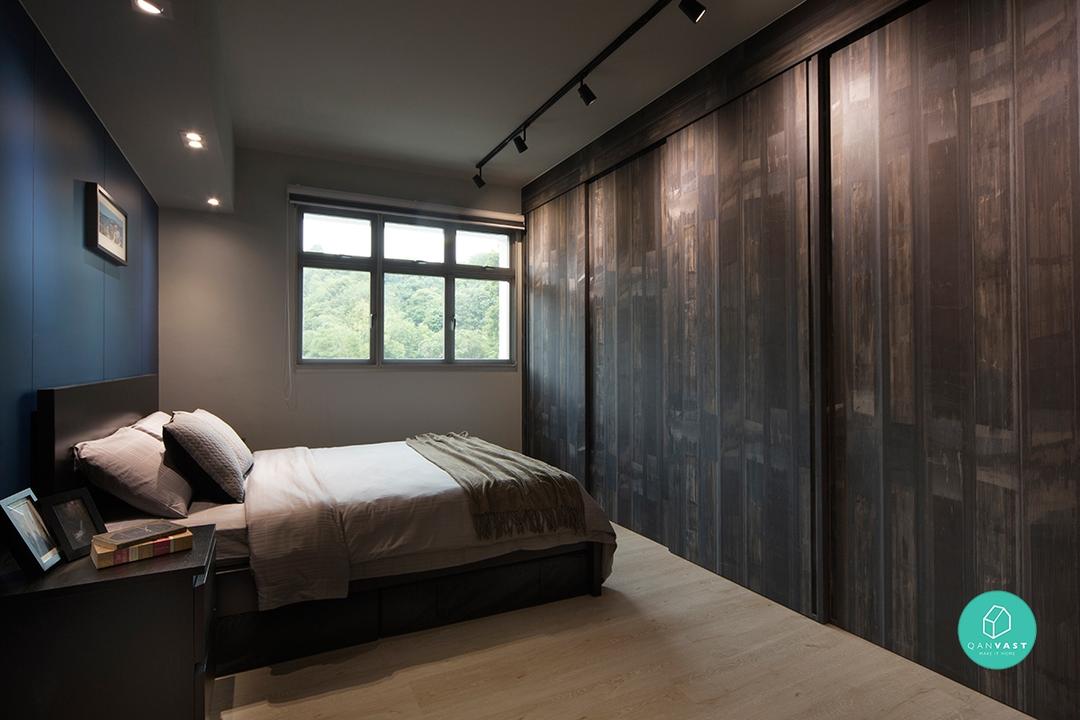 Qanvast: What are some other interesting designs that Teck Soon and Widya came up with?

N: As a book lover, I have about a thousand books that I needed to fit in my study. I told them I wanted a mixture of open and closed shelving in an irregular pattern, and that I wanted to display my statues and toys as separate showpieces, positioned in different places.

Widya was very meticulous when coming up shelving solutions - she asked me how many statues I had, their measurements and the heights of my tallest books etc. She went through about four to five designs before we finally settled on a design where one side was geeky with the comic books, and the other side is filled up with my literature and psychology books. 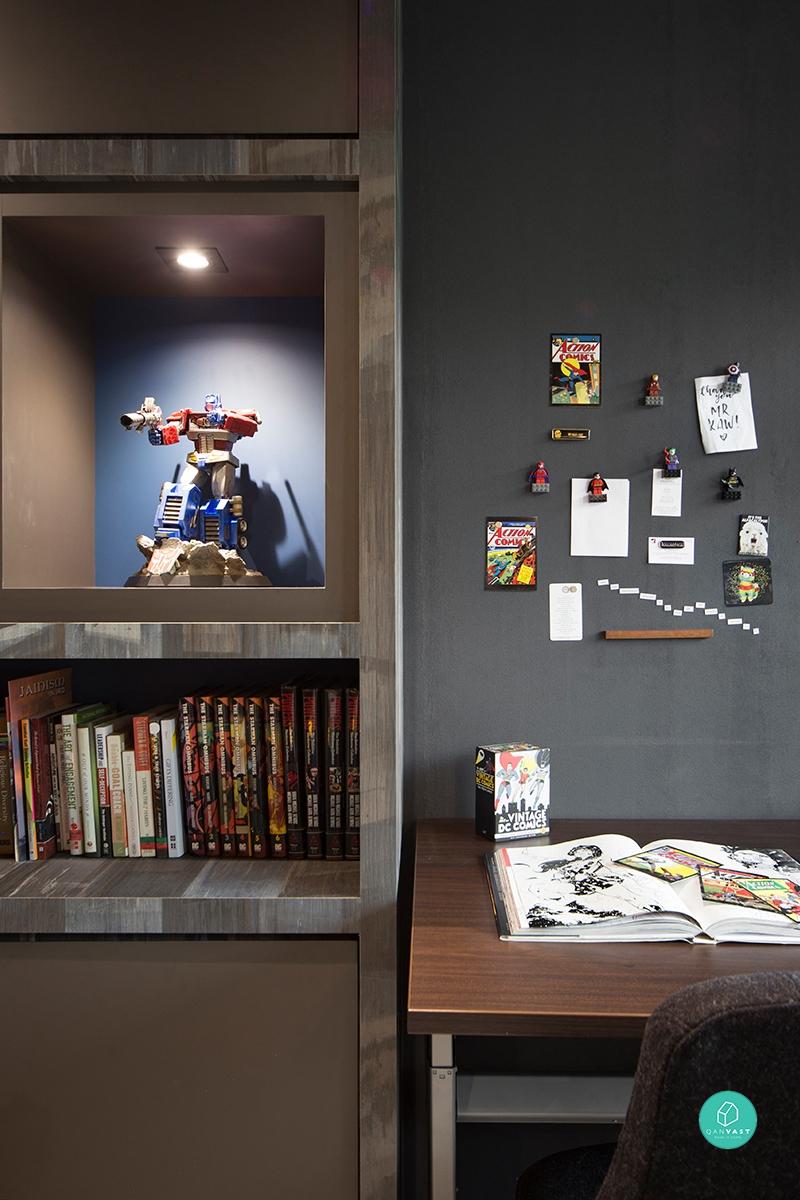 Qanvast: Your kitchen is very well-designed too. Tell us about it.

L: Teck Soon recommended moving the door from the side to the centre so that we could have an L-shaped kitchen that will give us a lot more space.

They gave us an ergonomic and functional design for our kitchen so we had a mixture of open and closed shelving in an irregular pattern such as in the study room, maximising the counter space over the sink since we could use that area for drying wet dishes. Widya recommended us the KompacPlus counter top as it comes in a range of textures and is completely non-permeable and heat resistant. The stone texture countertop that we picked also matched the glass backsplash and vinyl cabinets perfectly. 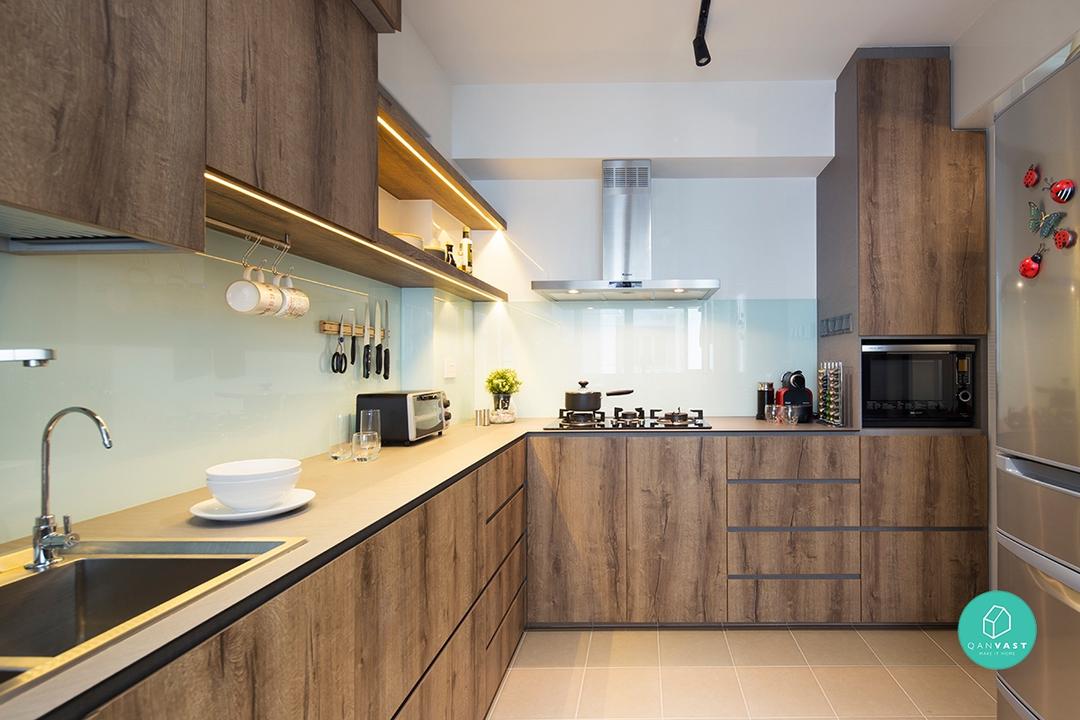 Qanvast: What are the challenges that come with a flat in its original condition?

L: The first time that we entered our home, we were shocked when we saw that the floor was just made out of raw, rough concrete. Even though we had opted out of flooring when we signed the contract with HDB, we expected that there would at least be screed as the flooring so that was a problem which arose because we didn’t do our homework with regard to that.

N: The major problem which annoyed was the drainage system in the bathroom. As there are two drainage holes, logic dictates that water should flow to both holes. However, the water only flowed in one direction. So Teck Soon had to tile over the original tiles since HDB doesn’t allow you to replace the original tiles. 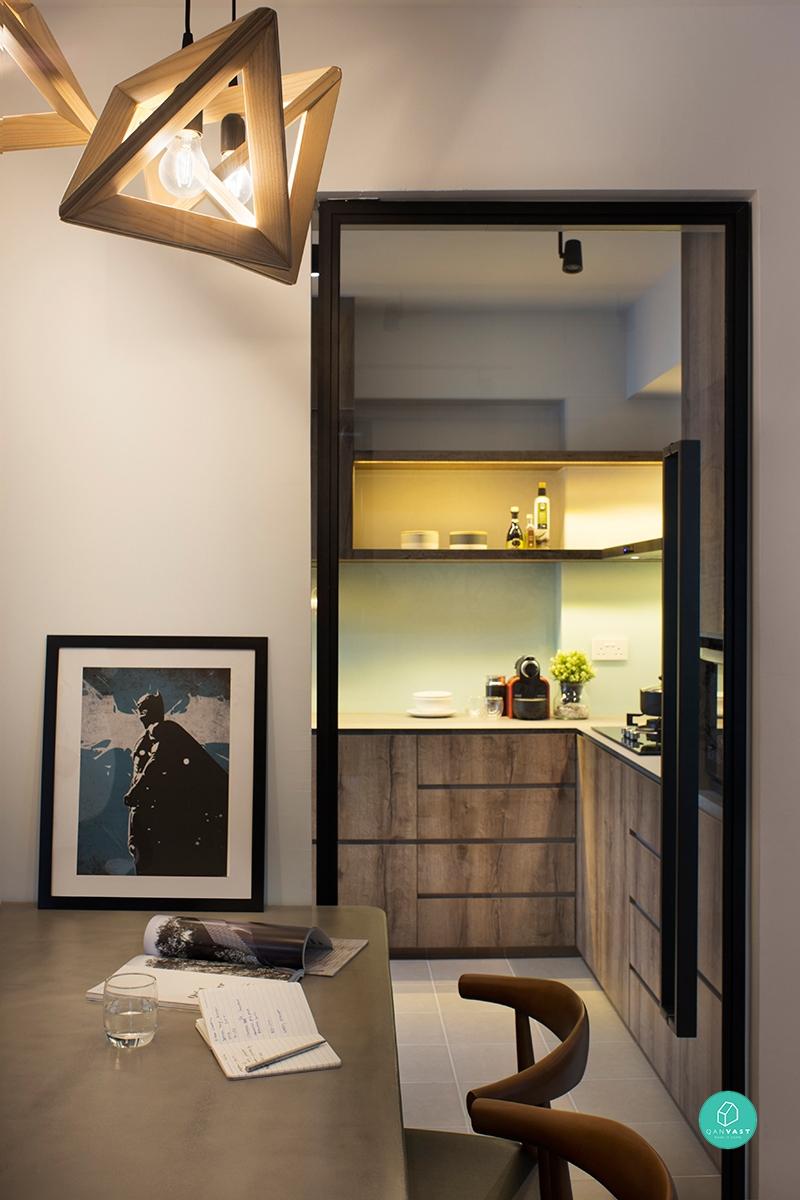 Qanvast: Did you enjoy working with the team at AD. I. WRKS?

L: Yes. It was fun working with them. In the WhatsApp group that we all were in, we would sometimes cast a vote whenever we couldn’t come to a consensus on certain design ideas or furnishings to get. Usually the ladies – me and Widya – win the vote.

N: There was this time that me and Teck Soon were thinking of getting this cork table from IKEA. As it was in a dark shade, it looked very masculine and cool. However, we were outvoted by the women [laughs]. 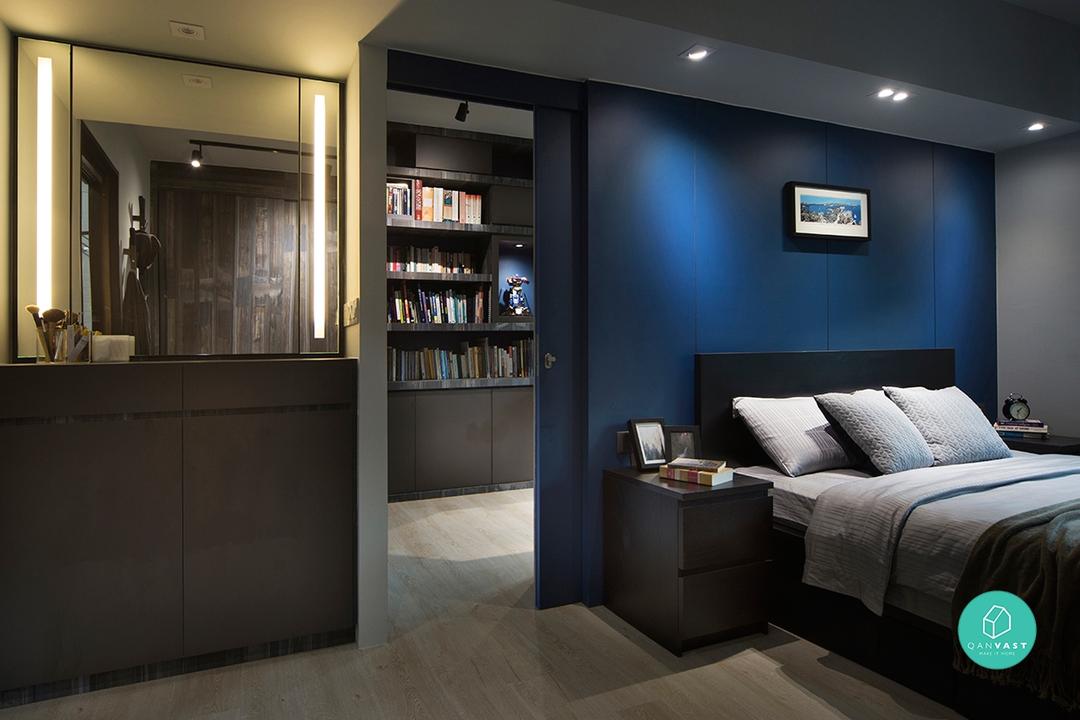 Qanvast: Were there any hiccups on your renovation journey?

N: While Widya did a fantastic job coming up with the designs, she made a mistake in her calculations and had to redraw everything and redo the calculations so as to reduce the heights of all the shelving units and other carpentry by 5mm. Thankfully, this was a problem that was encountered during the drawing stage. Widya and the team are very meticulous so I believe they are able to spot mistakes before the renovation begins. 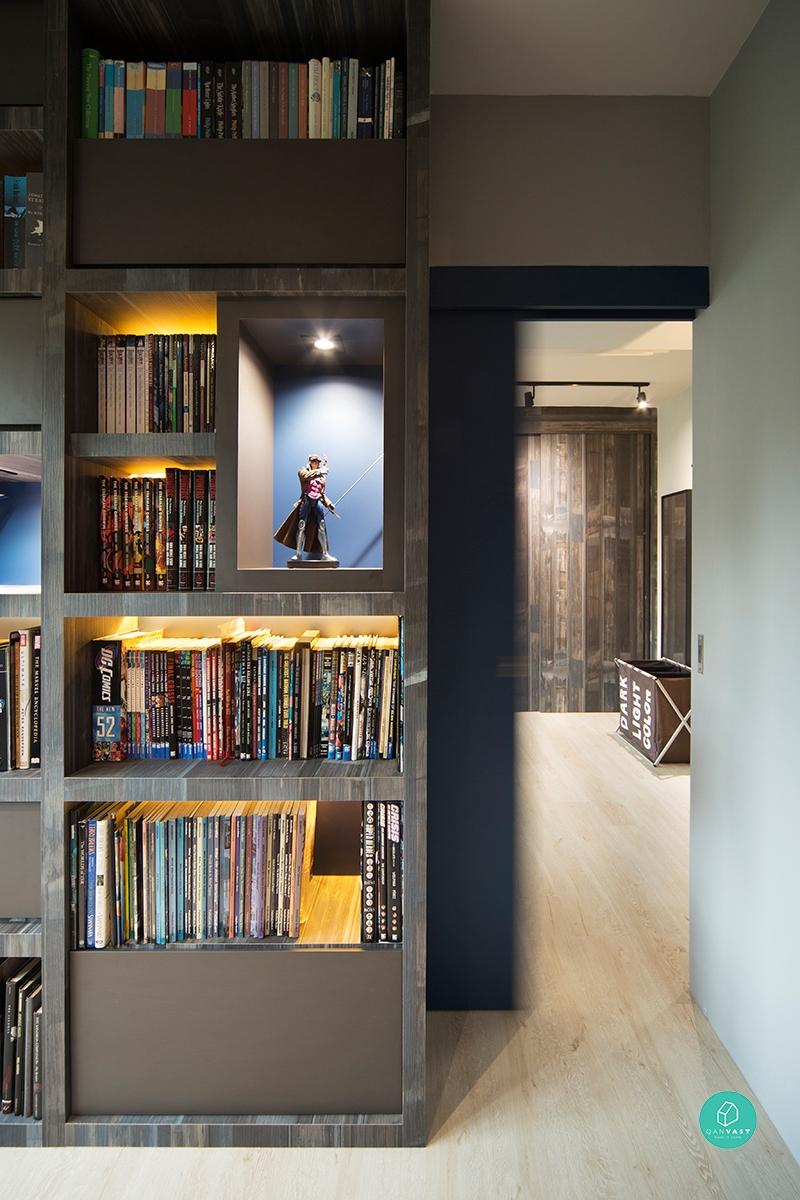 Qanvast: How did Teck Soon and Widya make your home cat-friendly?

N: They catified the home so that our cat can be comfortable within the home. The bay window area was customised based on the pictures we sent them. Our cat will be able to climb up one side, walk across the shelf the top and come down the other side. We really liked this idea as the bay window also doubles up as storage space to maximise the space in our home. We also wanted the sink in the common bathroom to be able to fit the cat’s litter box such that it looks like part of the bathroom design and is inconspicuous. 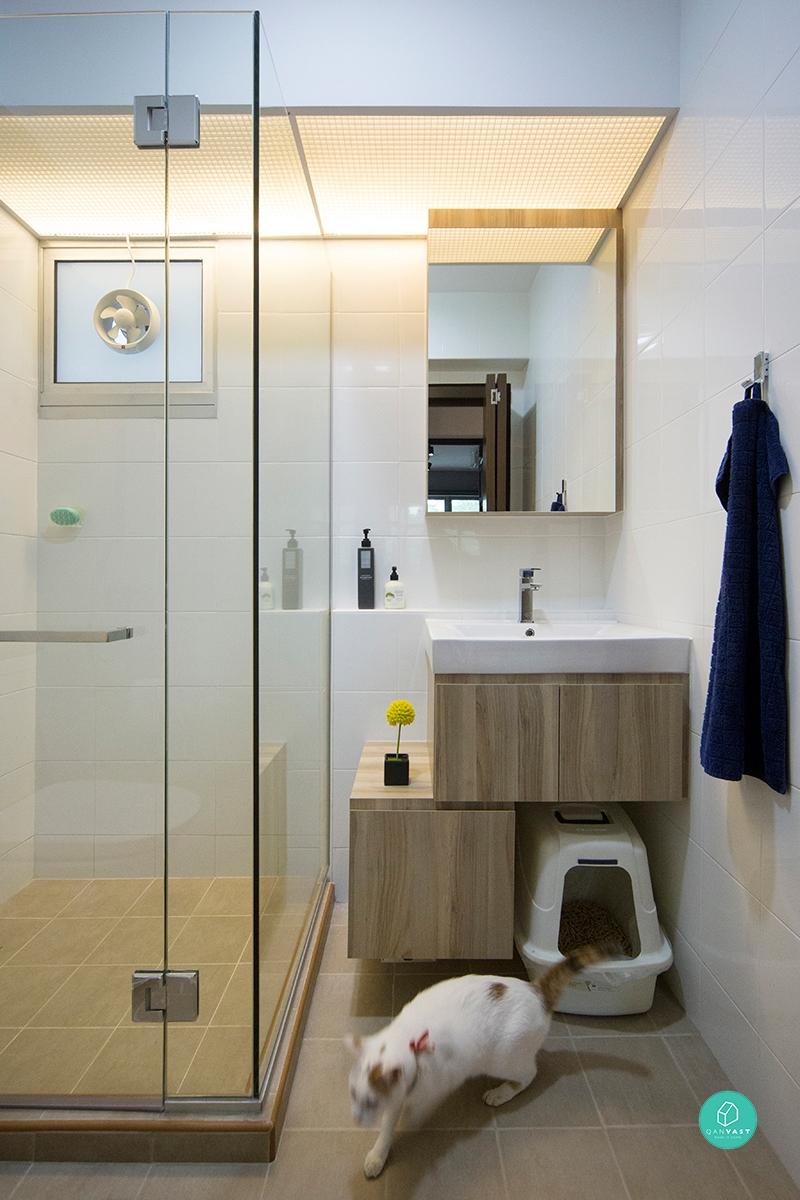 Qanvast: Any final advice for homeowners?

L: Don’t rush into any decisions. Plan ahead and be organised.

N: Yes, it’s important to be organised. Collect pictures of design ideas that you like so that you can show your interior designer exactly what you want - it'll be easier to communicate what you want as people interpret the styles differently.

Start Your Renovation Journey With Us

Drop us a complimentary quote request and we’ll recommend you five interior firms that suit your budget needs, for free! Homeowners who engage an interior designer, following a request for quote, are covered under the Qanvast Guarantee.

Looking for inspiration? Download our app on the App Store and Google Play to discover thousands of interior design ideas! 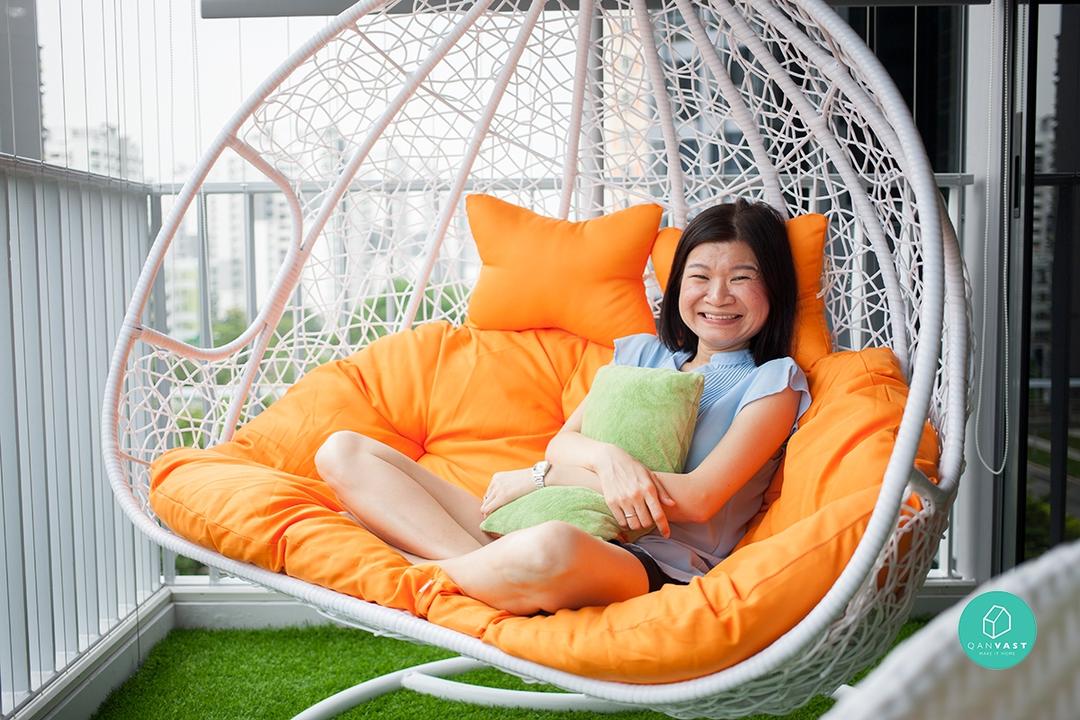 RENOVATION JOURNEY
Renovation Journey: Making The Most Of Space
Making the switch from a spacious 5-room flat to a 3-room condominium unit can be difficult. Find out how this family found space-maximising solutions with D'Planner. 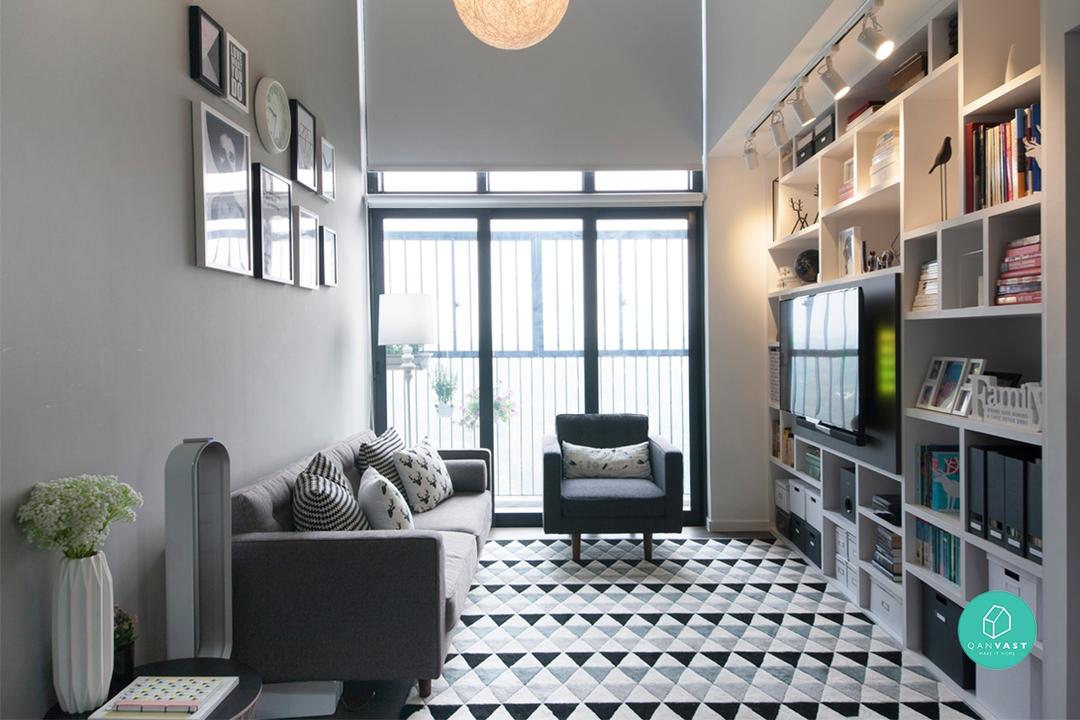 RENOVATION JOURNEY
Renovation Journey: Making A Statement With Patterns
With a clear mindset of wanting to create a home that is of a consistent theme, homeowners Alan and Debbie put in the extra effort to make sure that everything in their home sings in harmony. Together with Dyel Design, see how the couple created a lovely place that most would aspire to have as their dream home.
Preparing the next article…
Recommended for you 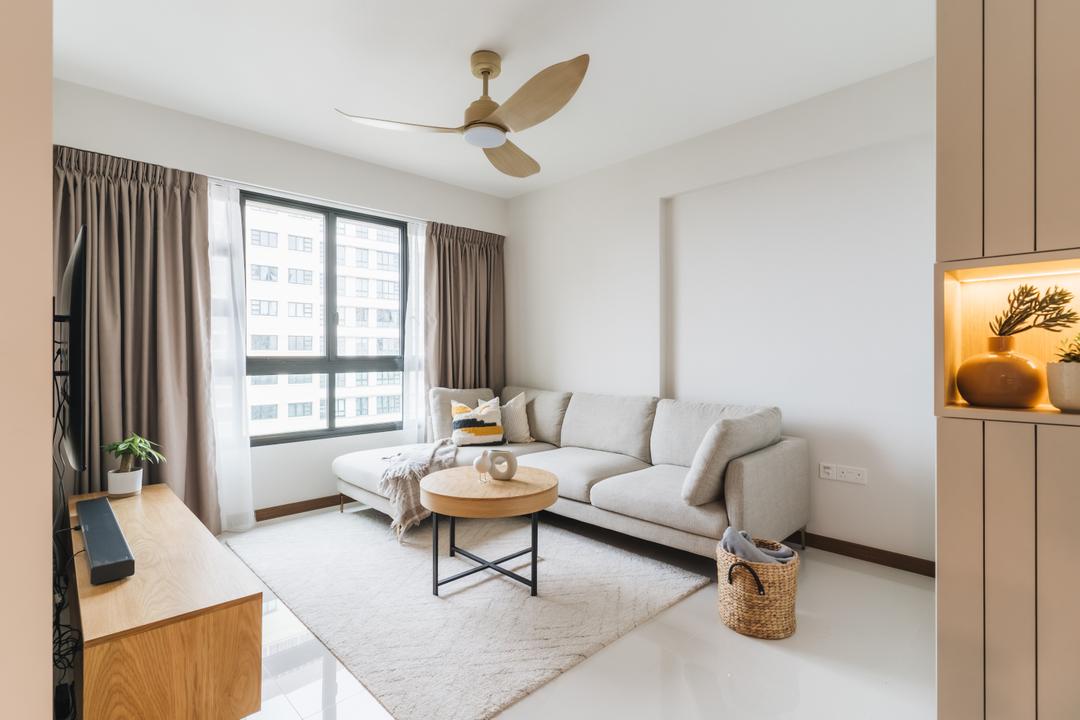 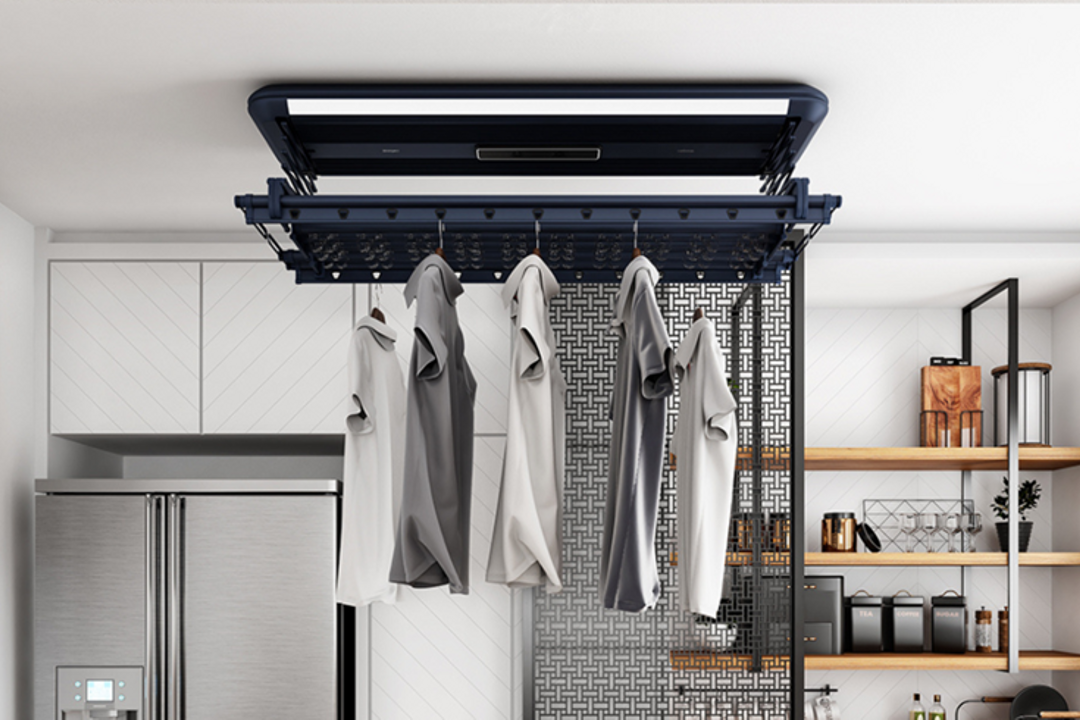 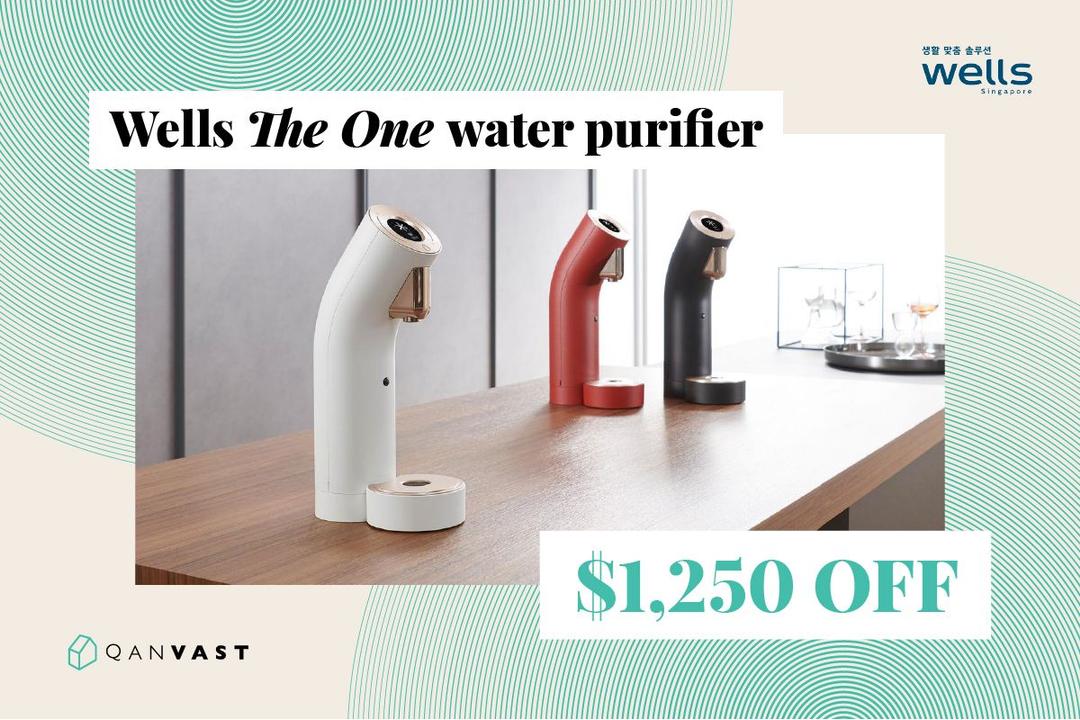