The dark side is a pathway to homes some consider to be… downright stylish.

When it comes to painting their walls, most Singaporean homeowners would consider beige or tans – and not black – to be their top choice. But before you make up your mind, first, take a look at this dramatic Balmoral Hills apartment and its deep, dark hues; Summerhaus D’zign co-founder Larry Lim believes they are the key to the home’s hotel-like vibe. (And we agree!) 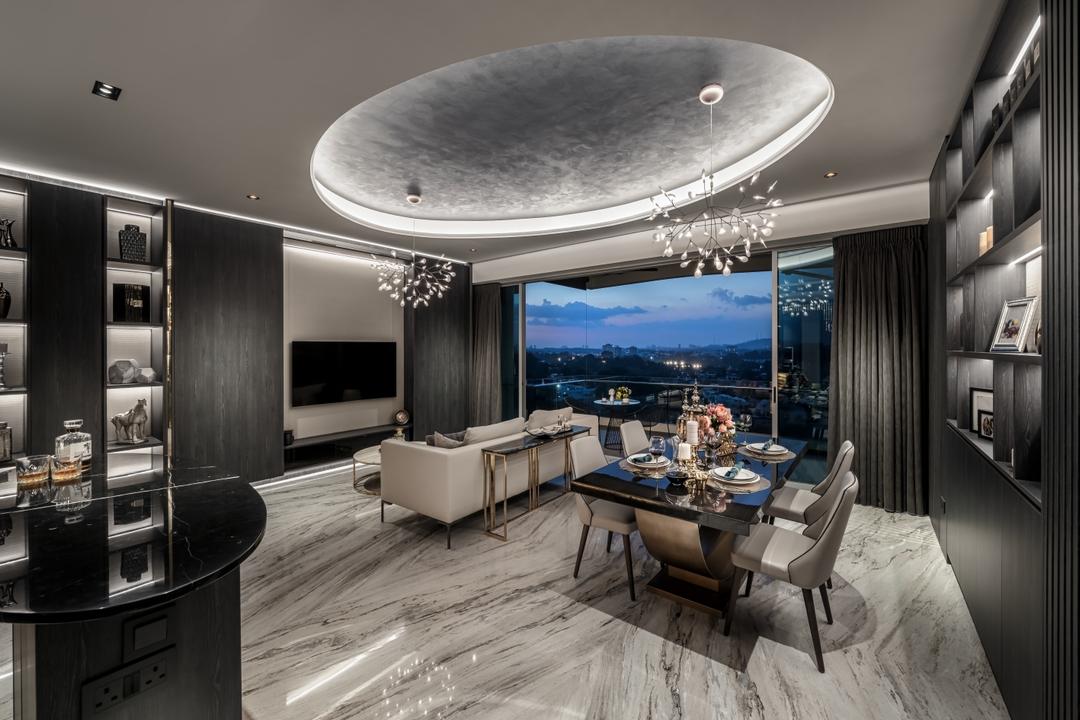 “I find that it (the colour black) makes spaces look more sophisticated, it brings out a more masculine feel as compared to white,” says Larry. “White is elegant, but black is opulent.”

However, as any seasoned designer will say, making a house a home takes more than a daring colour palette – and to turn this apartment into the bold abode it is, Larry and his team also worked in plenty of thoughtful features that take into account the practical needs and aesthetic preferences of its owners. Read on for the details!

Larry (L): I’d say that most Singaporeans are very averse to having a dark colour palette for their homes, so naturally the owners were afraid that the entire look would be too gloomy for them. But in the end, we were able to lighten up the overall look by including some mid-tones, so they were comfortable with it. 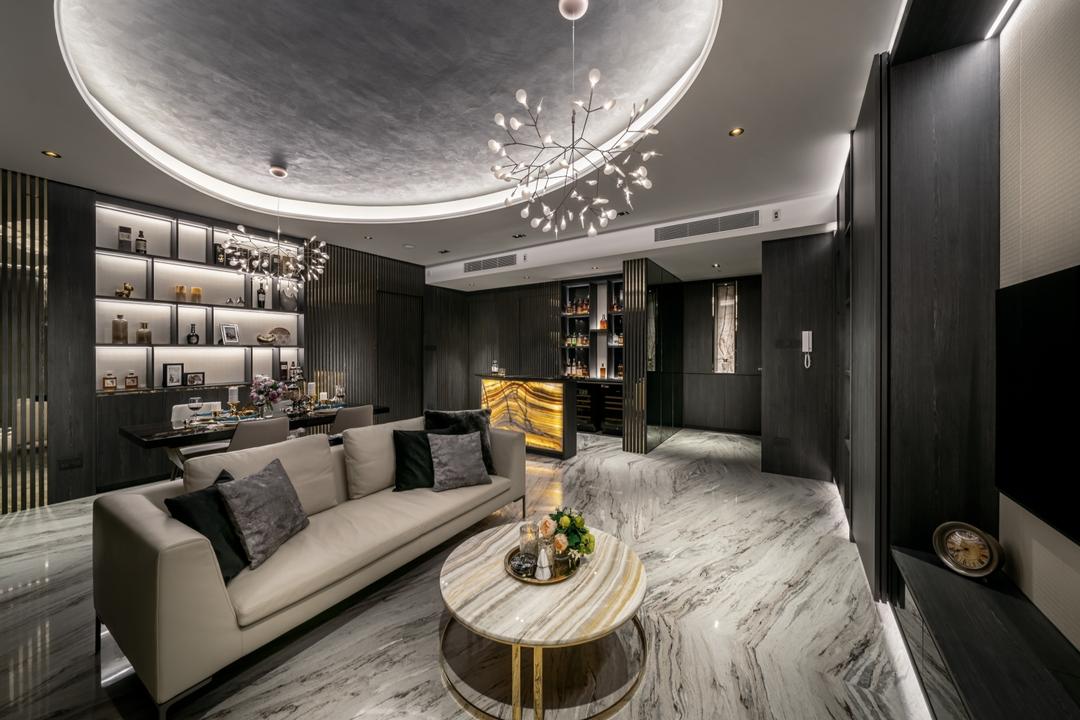 The living room’s new backlit bar counter was built from an onyx slab, with the leftover stone used to create a custom coffee table.

Design preferences wise, it was very much open. We were told that they preferred a modern, clean-cut look; not the maximalist kind, yet not too minimalist. And of course, they also wanted their rooms to have a classy feel – like posh, but still homely.

L: This isn’t a new property, if I’m not wrong it’s about 10 to 12 years old. When we came over for the site visit, what struck us most was the great balcony view of the Stevens Road area. 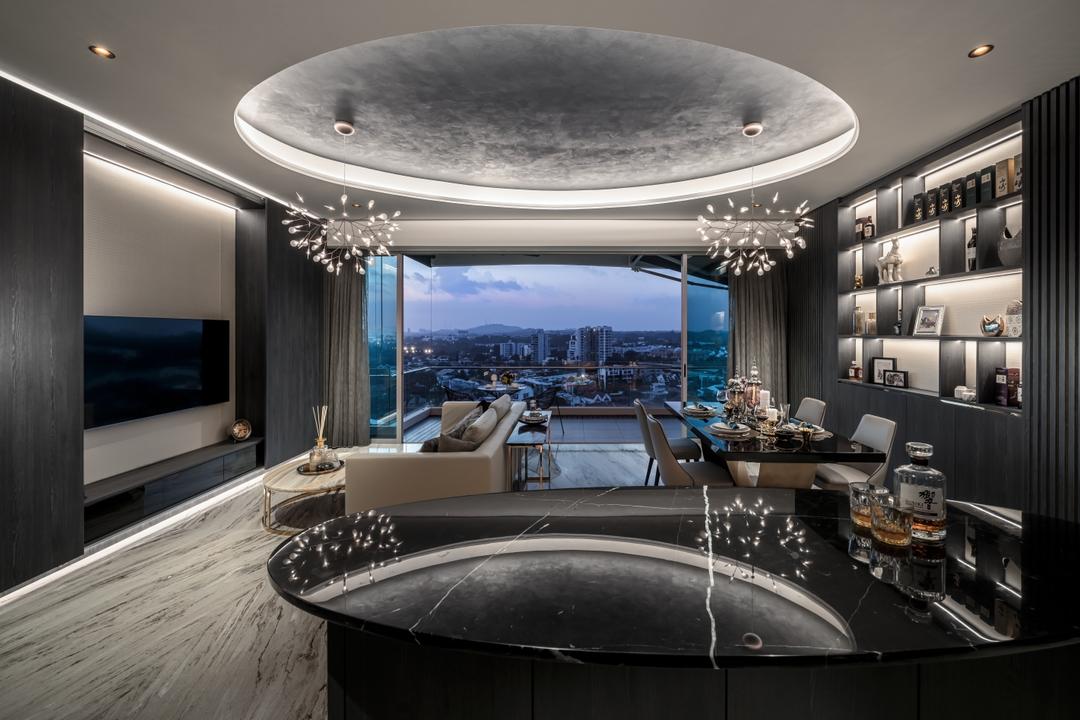 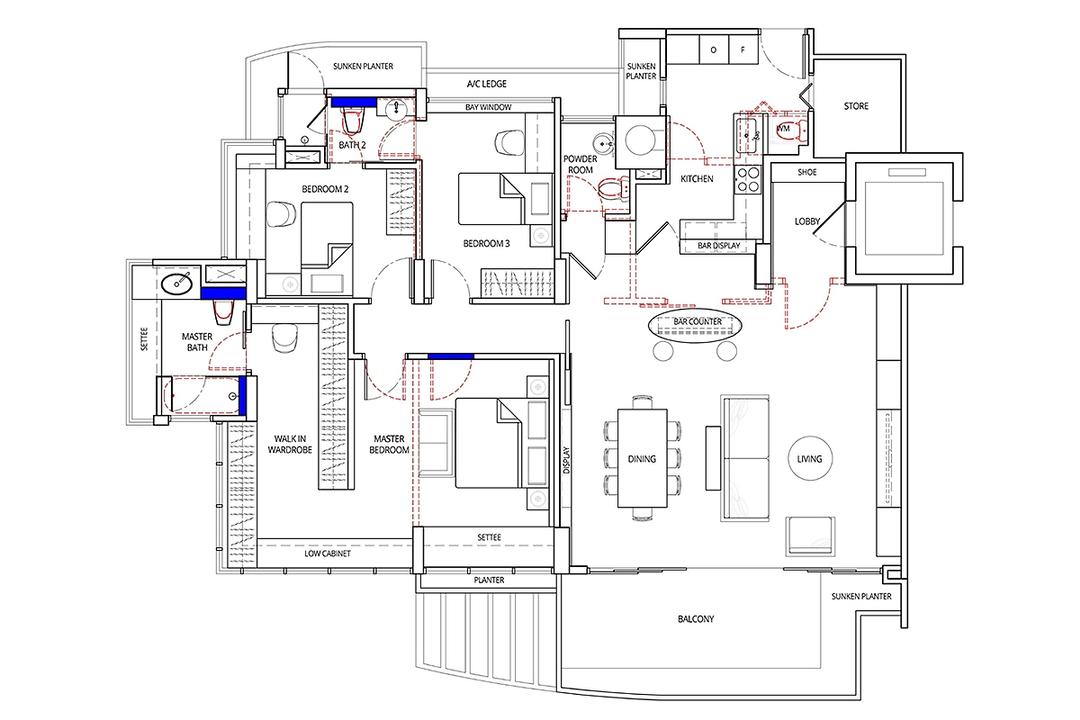 The home’s floor plan. Red outlines indicate where wall/fixtures were hacked during the renovation.

The space also wasn’t was as open as it is now; the entrance to the private lift lobby, kitchen and common toilet were all eating into the living room’s space.

But after discussing with the owners and understanding their needs – they don’t cook often or need a common bathroom with a shower area – we reduced the size of the wet kitchen and freed up the front portion of the bathroom; the idea was to use the extra space to turn the entire living room into a giant, relaxed entertainment area. 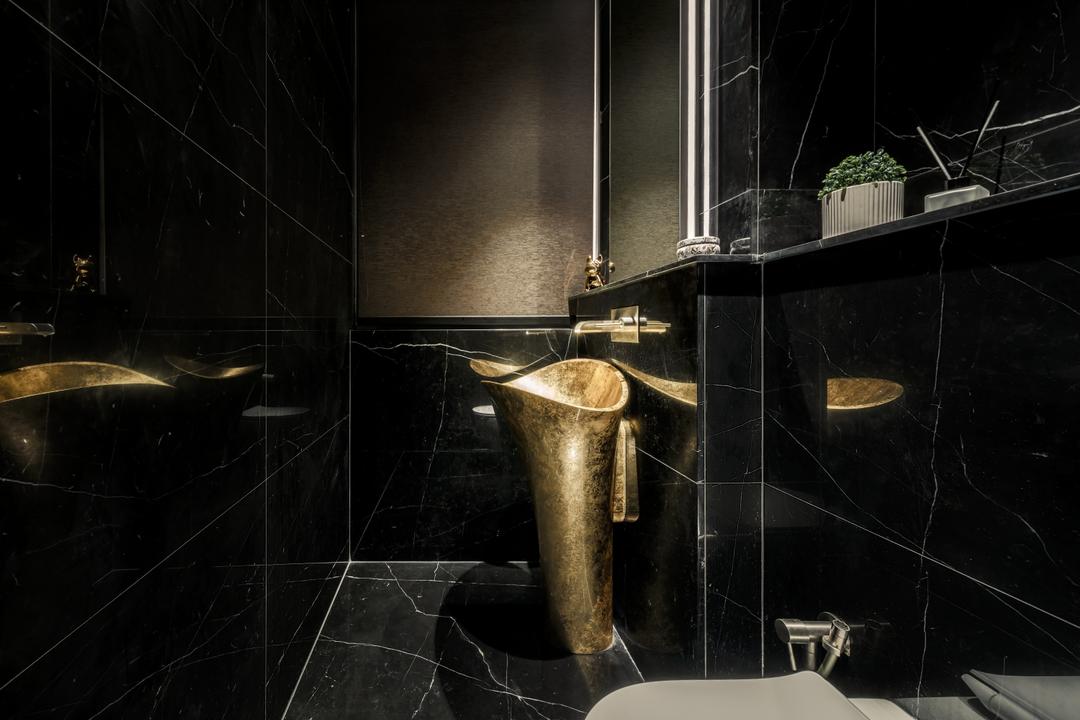 Other than shrinking the common bathroom, another thing that we did was to shift the basin further in where the shower cubicle used to be. Instead of the typical wall-mounted sink, we proposed getting a standalone model – we felt it would stand out against the walls, which are clad in Nero Marquina slabs. 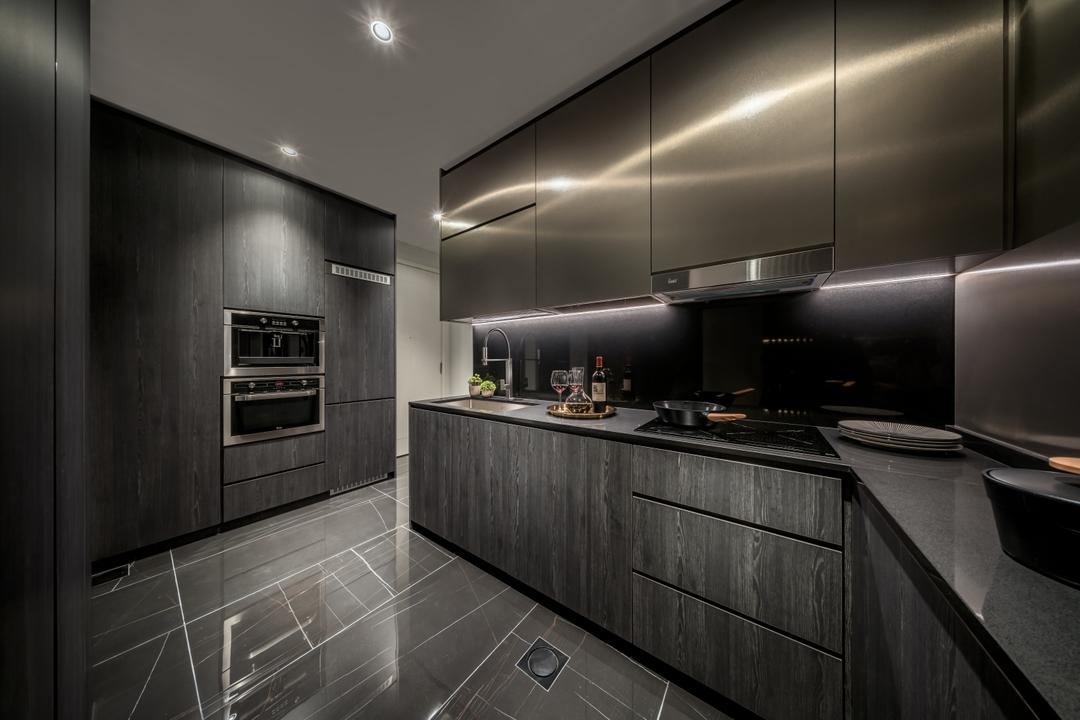 The kitchen was made a bit smaller like the bathroom, but it still remains very functional with ample storage and enough space for a full set of appliances like a microwave, steamer, and a coffee machine.

For the upper row of cabinets, they aren’t actually made of stainless steel. We used the DecoMetal laminate from Formica to give them that metallic look, it's fairly pricey so you don’t see DecoMetal that often (in homes); the good part of this laminate is that it doesn’t have the weight of real stainless steel, so the cabinets end up being lighter. 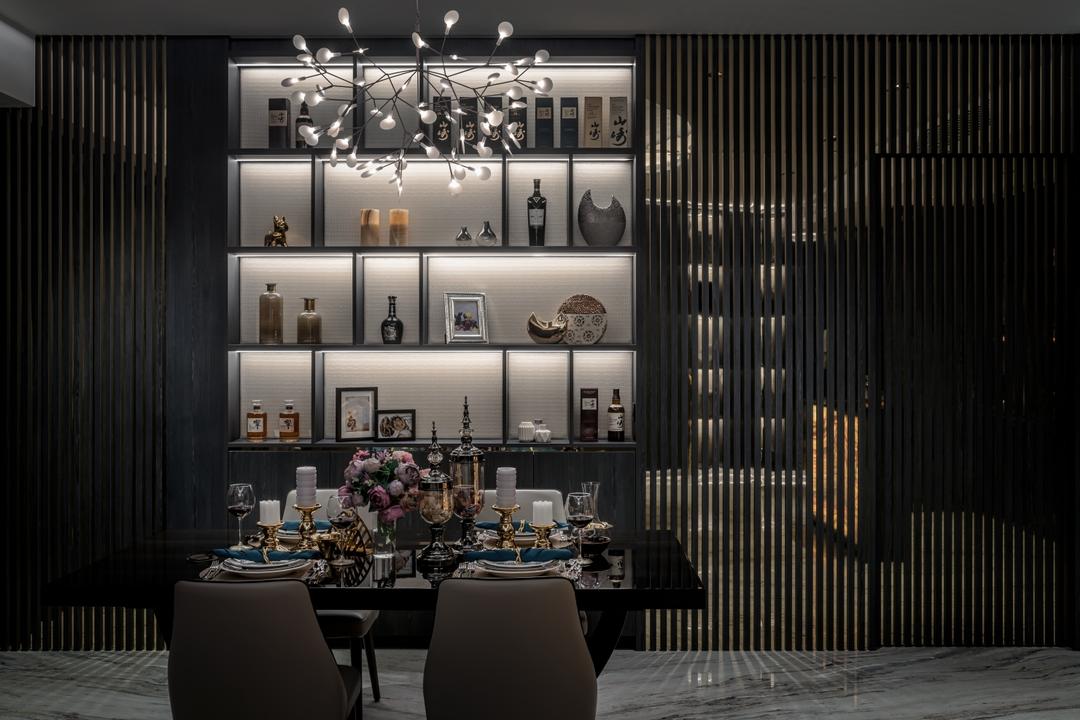 There’s no proper storeroom, so we had to build a fair number of storage solutions around the living room and the rest of the house – they’re mostly integrated into the surrounding structures, which really helps them to blend in.

One exception is the display shelf behind the dining area, and it stands out because its backing is made from white synthetic leather; the TV display wall uses the same material as well. Also, if you look closely, you’ll find the entrance to the walkway leading into the bedrooms – it’s hidden in the slatted panels beside the display shelf. 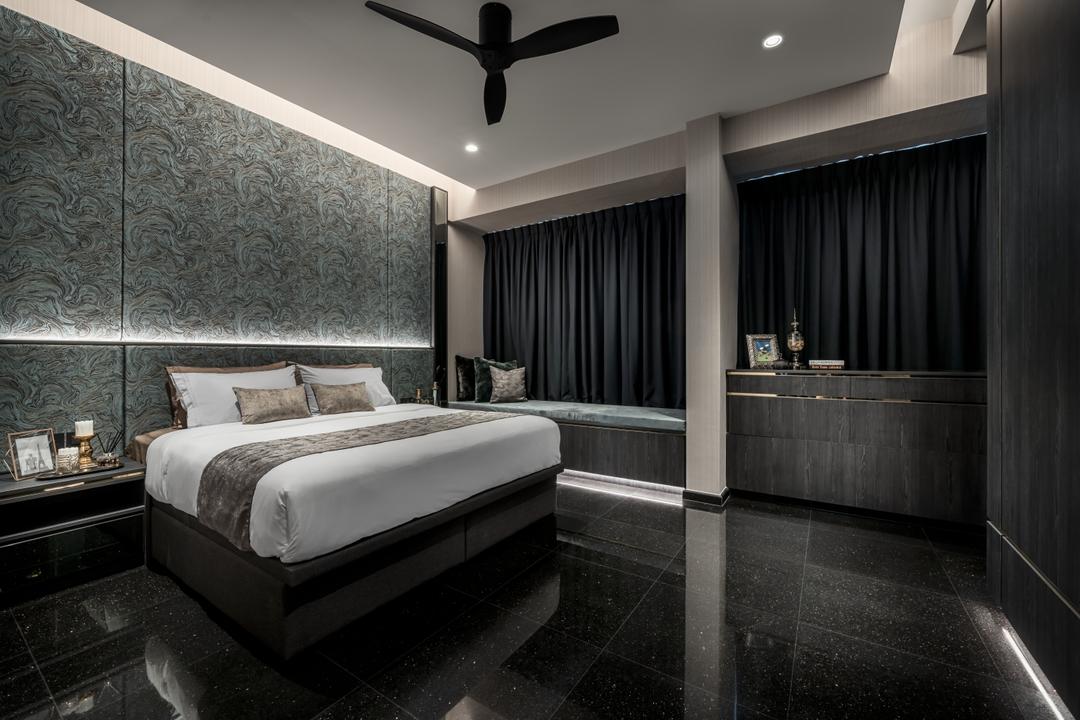 Originally, this house was a four-bedder unit, but because we merged a common bedroom with the existing master (bedroom), you could say that it’s now a three-bedder in a way.

The owners didn’t have any uses for the spare room, so they thought it would be a good idea to turn it into a connected walk-in wardrobe. To maximise the length of space beside the bed, we also built bay window seats and a low cabinet. 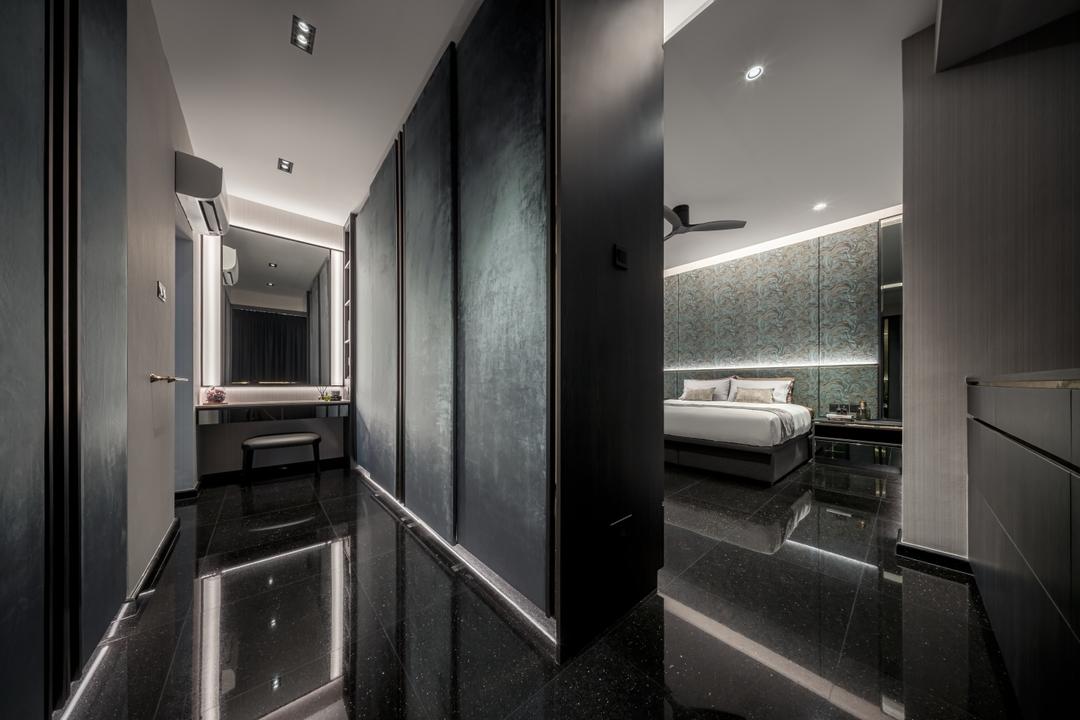 You can’t tell from the inside, but if you take a look at the floor plan, you’ll see that the wardrobes on the left are actually built over windows that were part of the common bedroom. The owners felt that they wouldn’t be opening them often, so we thought, “Why not maximise the space?” 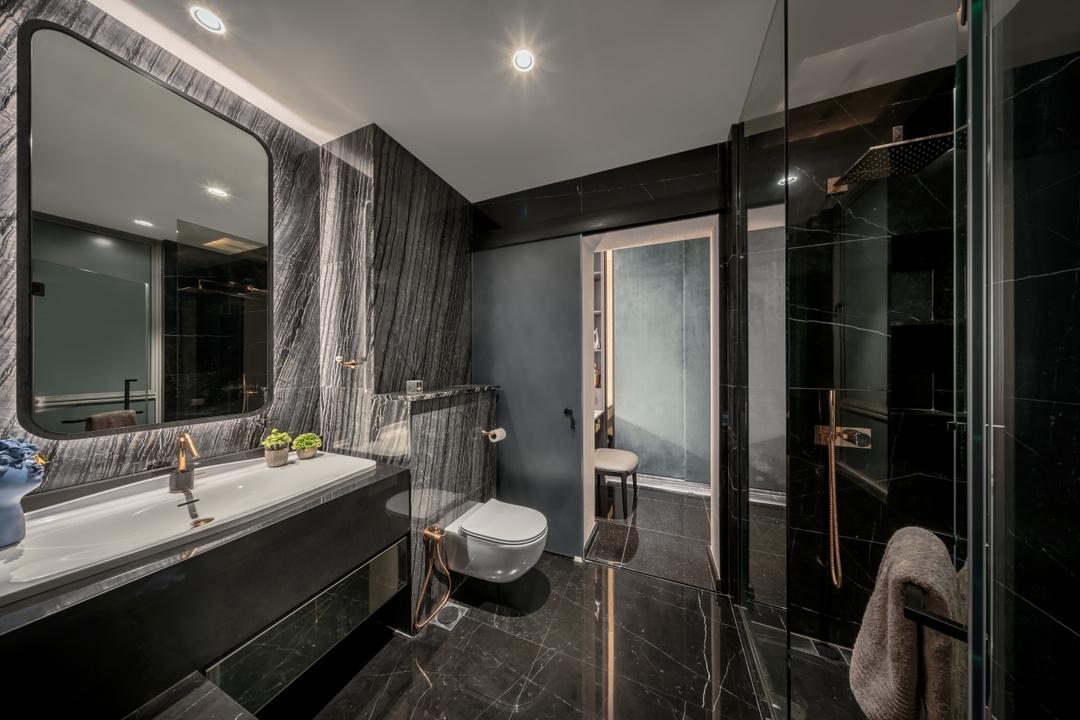 Renovating the master en suite was fairly straightforward because we kept the original positions of the fittings, so there weren’t any challenges with the plumbing. The only major change was the removal of the existing bathtub, which was replaced with a standing shower.

Like the master bedroom, there was a bay window area in the bathroom, but because it couldn’t be removed, we did the next best thing, which was to build an extended vanity over it; that allowed us to put in a tall mirror and a long sink without worrying about their proportions being too big. 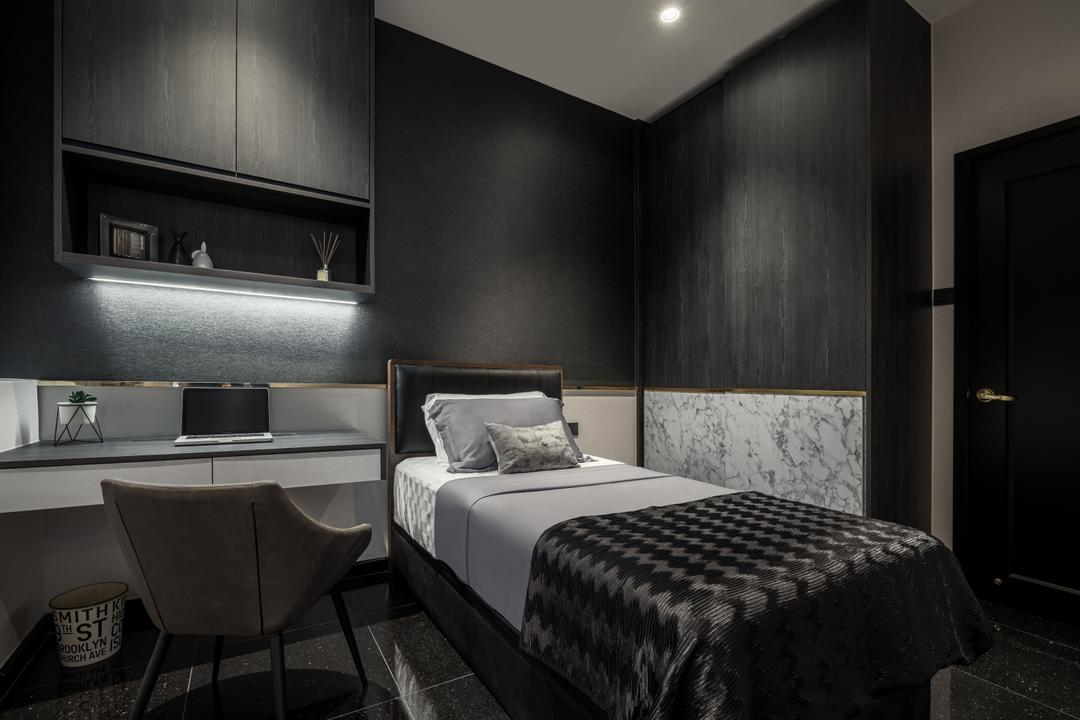 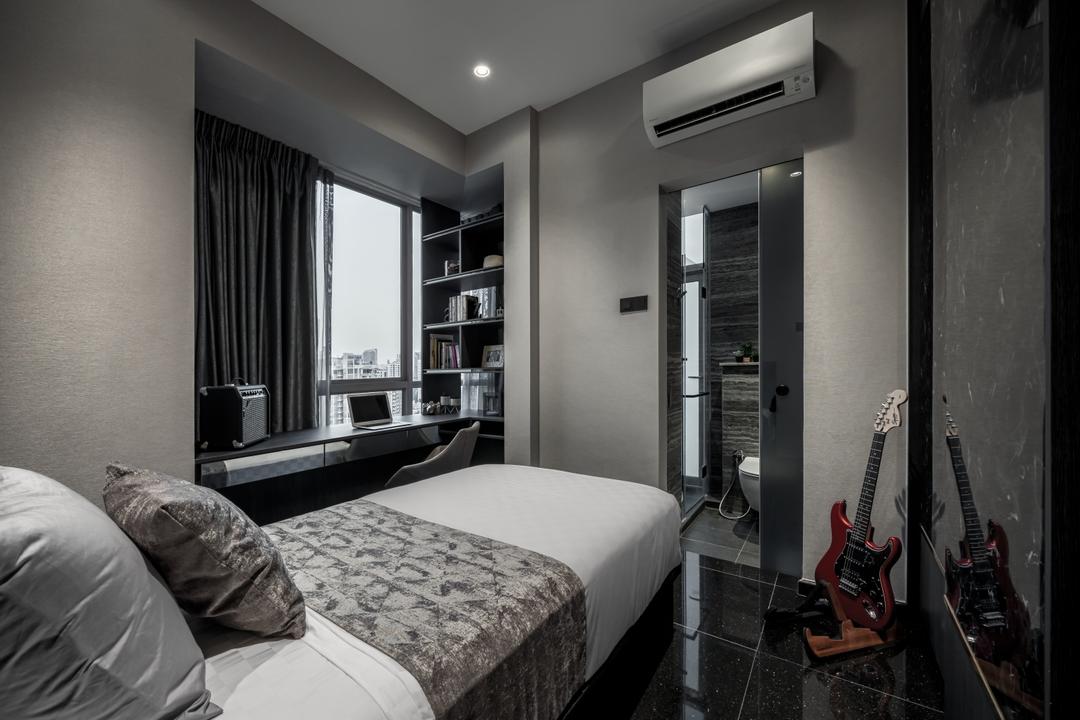 The junior bedrooms are each occupied by one of the owners’ sons. Basically, they serve the same function as spaces for work and rest, so it’s all about having a proper bed and a desk each. However, what makes the bedrooms a bit more unique is that they both have access to a shared en suite. 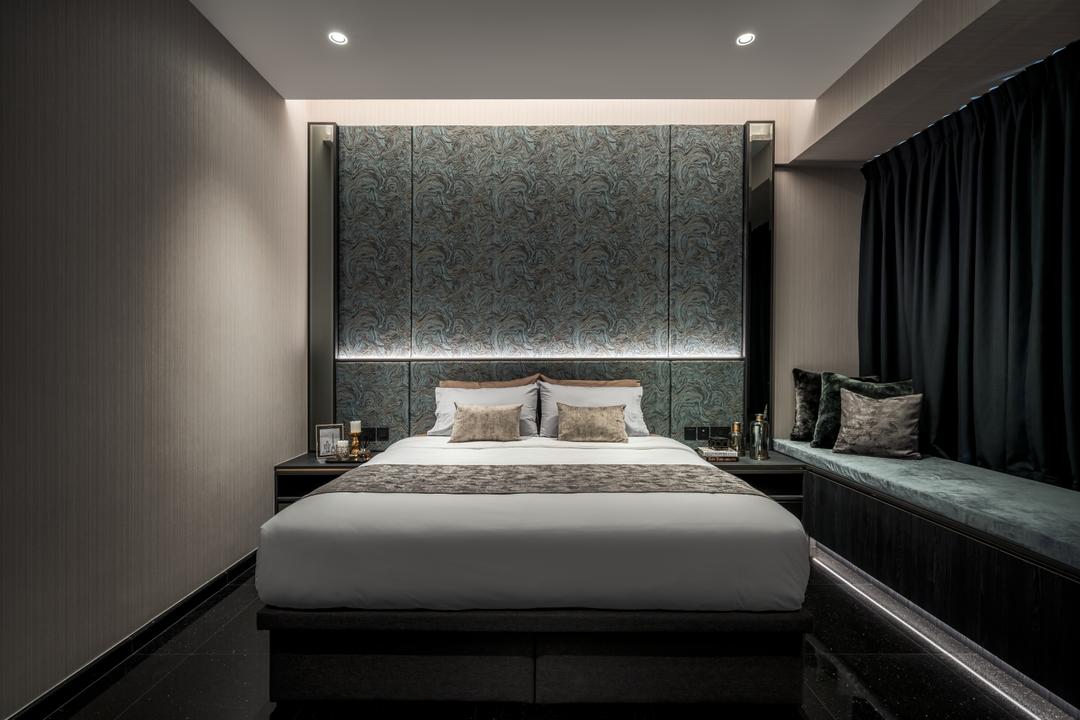 L: Overall, I think working on this home was a very pleasant process, and it turned out quite nicely. Having the opportunity to go a bit heavier on the detailing and material palette – which I have to thank the owners for – really made the space both interesting to design and look at.

There are just so many layers, you have leather on the walls, dark wood panels, and different marble textures everywhere, so it really makes for an interesting home. And not to forget, the dark theme, which is something we’re eager to embrace for our future projects!

Need help taking your home to the next level? 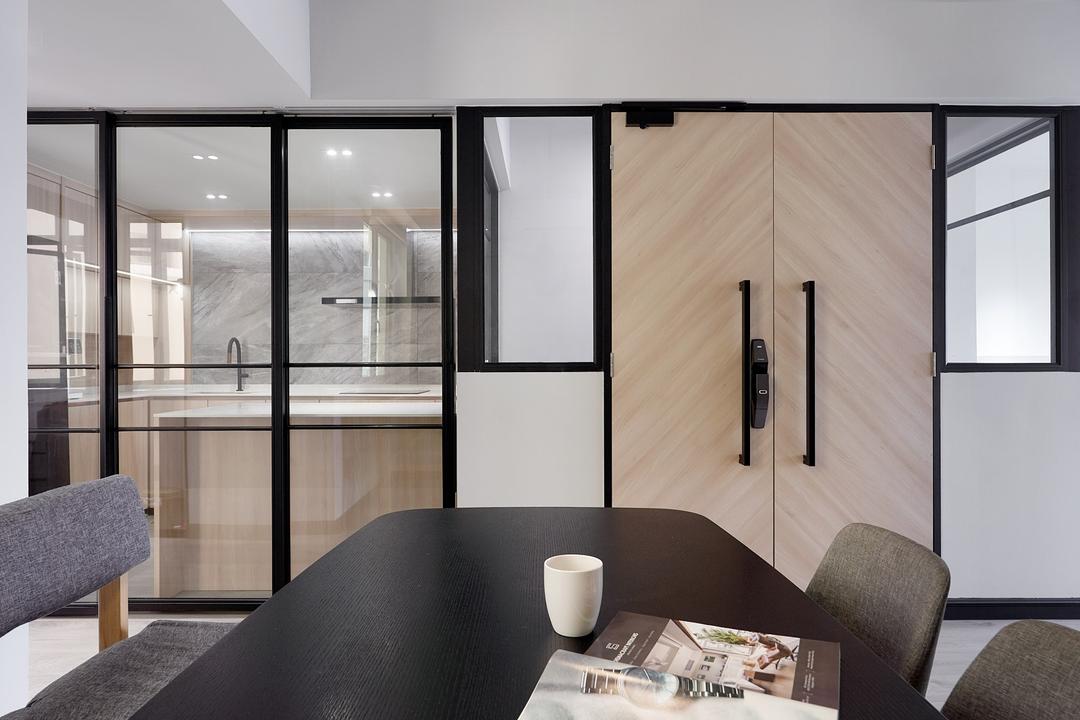 RENOVATION JOURNEY
Everything in This Home, Including Its Lobby, Was Redesigned
Home to a family of four, this condo is a cosy abode with its clean lines and sleek spaces. However, it didn't always look like that... 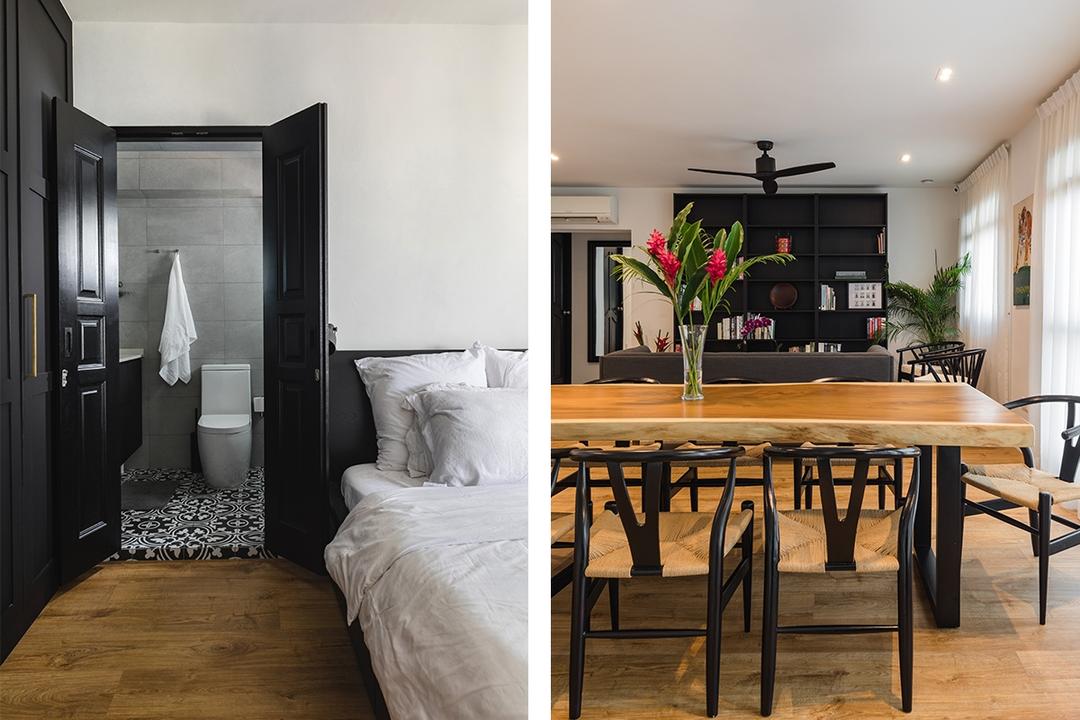 RENOVATION JOURNEY
A Colonial-Inspired 5-Room HDB Home That Doesn’t Feel Dated
As a fresh take on the past, this dietitian’s colonial-inspired renovation of a Jurong East HDB resale home feels anything but out-of-date. 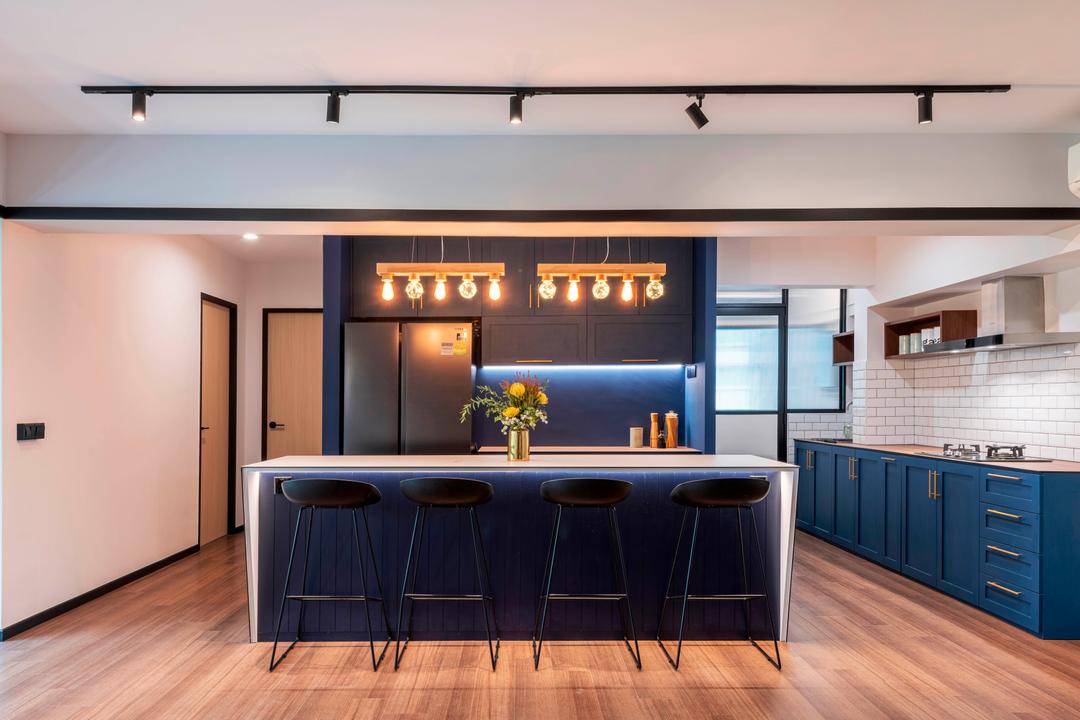 RENOVATION JOURNEY
An Open-Concept Kitchen Layout Revived This 20-Year-Old Flat
Despite the flat’s old age (20!), couple Jay and Jolene still chose to make this Bukit Batok resale unit their first home, and it’s all thanks to the kitchen’s layout.
Preparing the next article…
Recommended for you 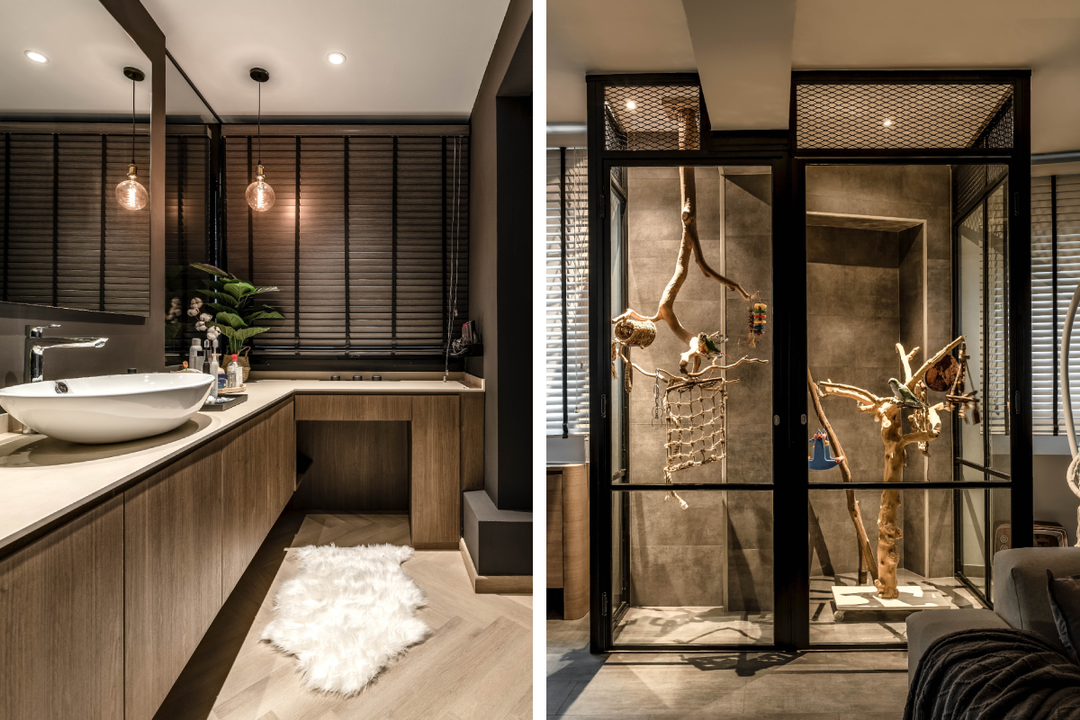