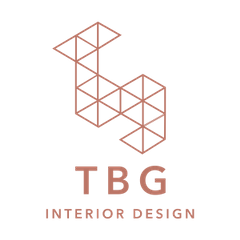 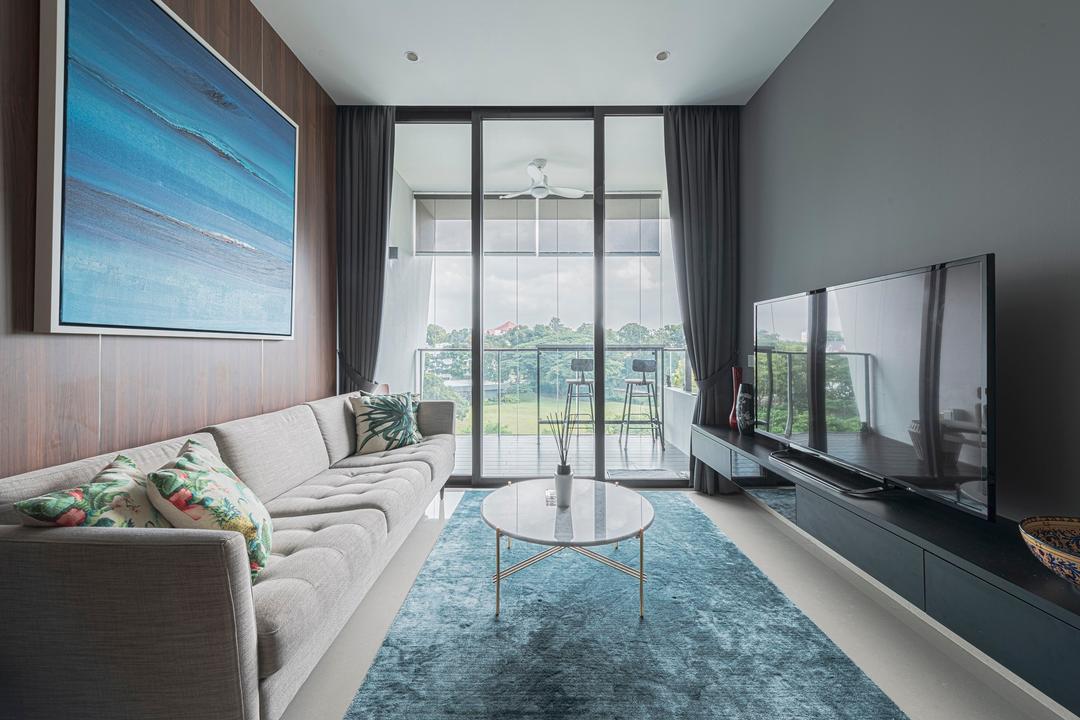 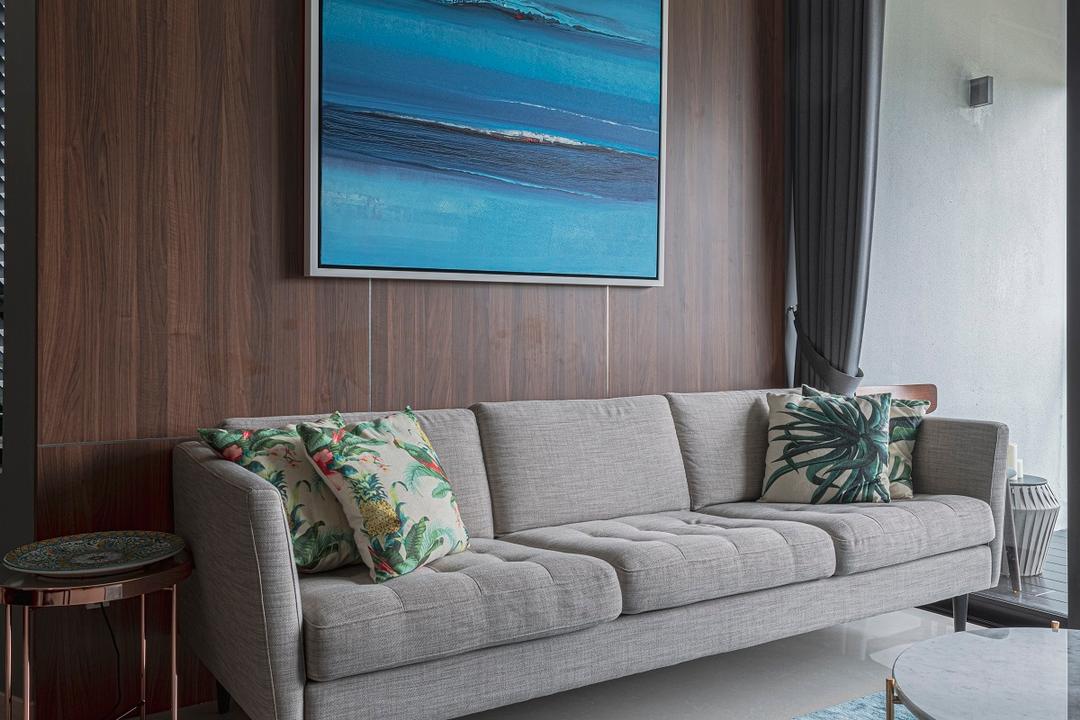 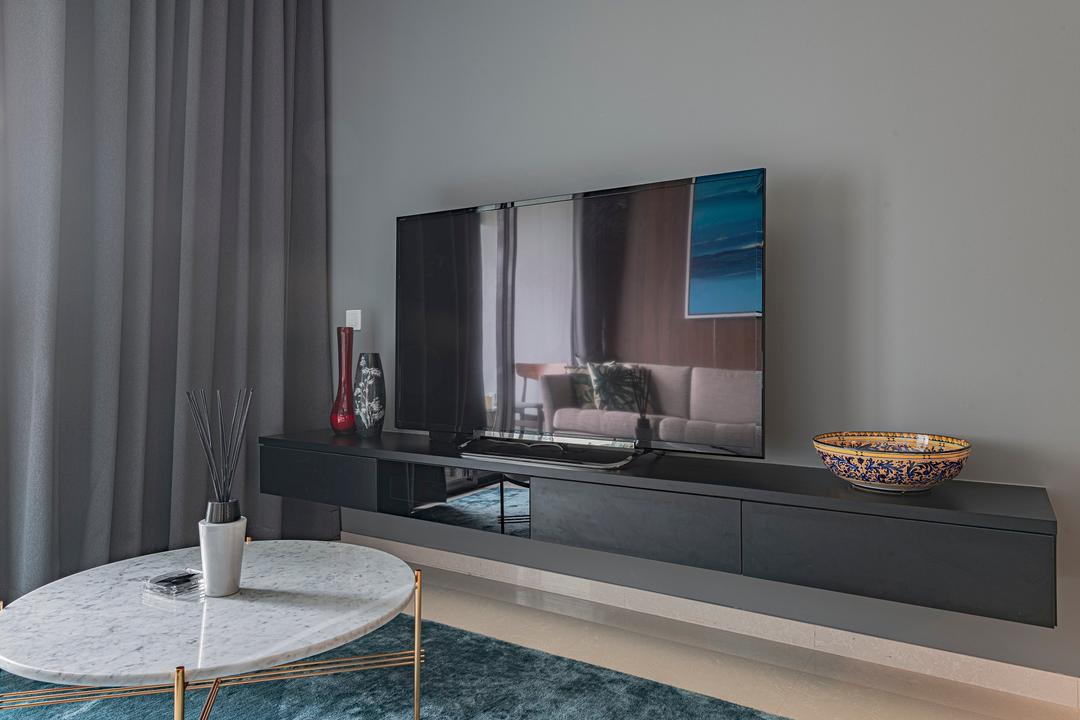 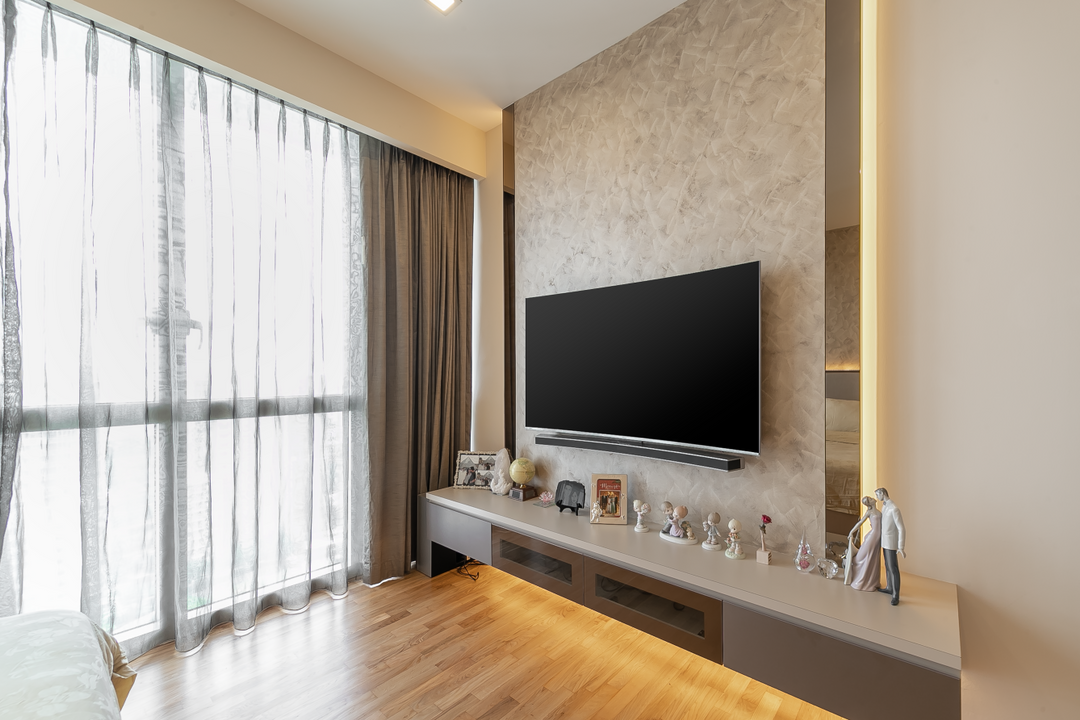 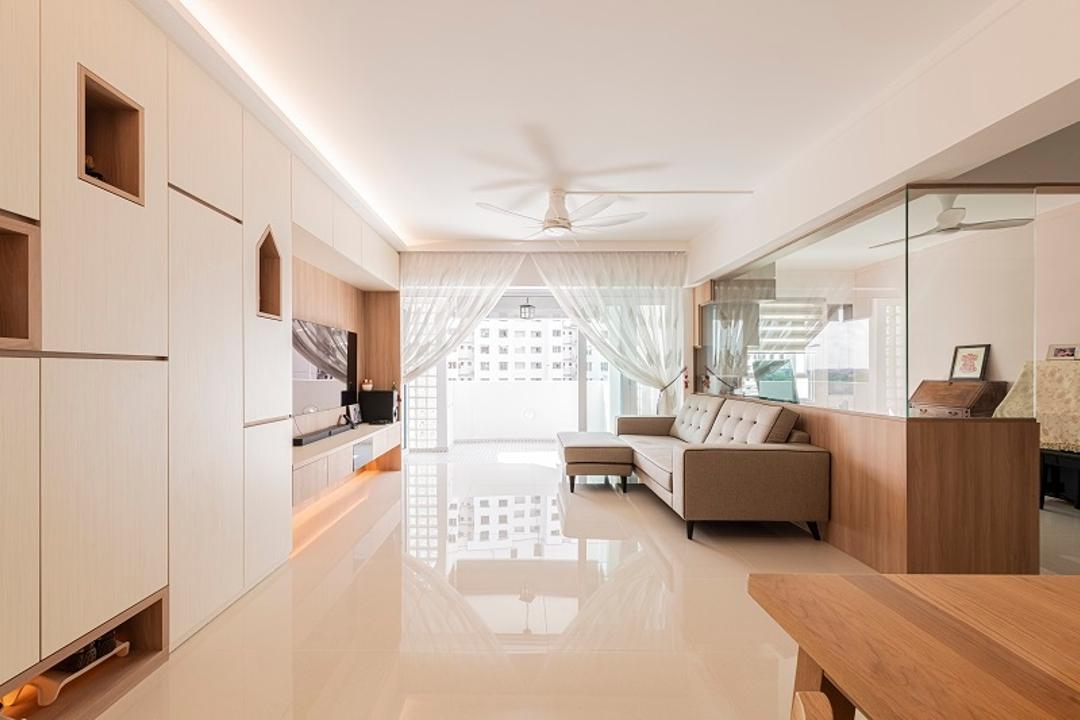 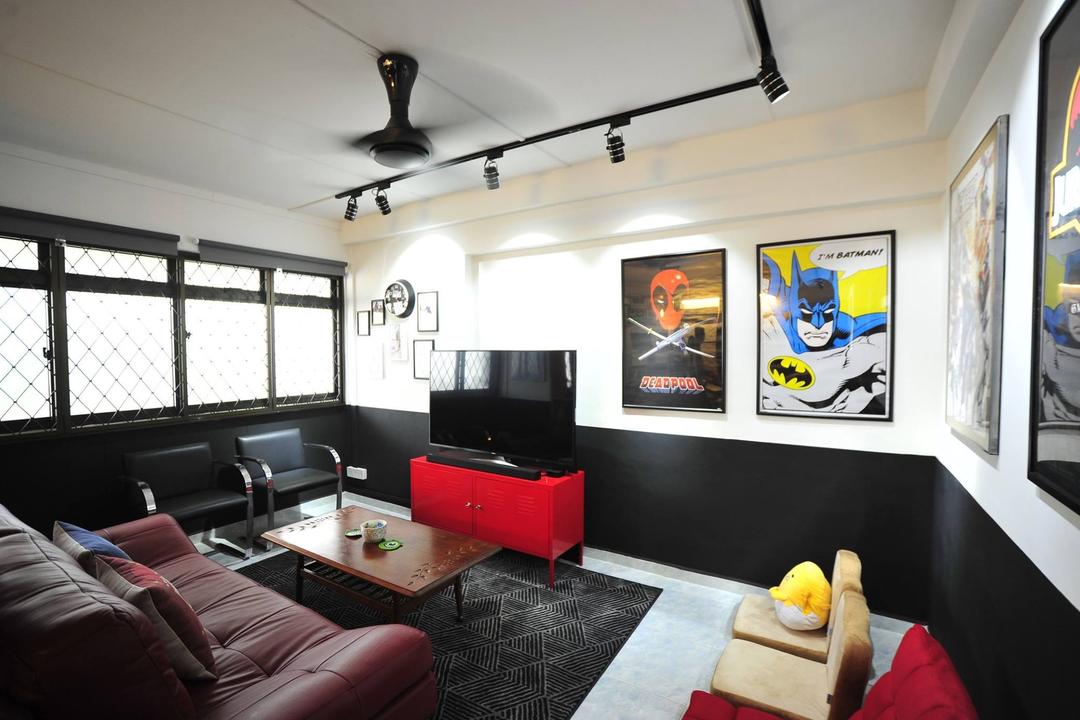 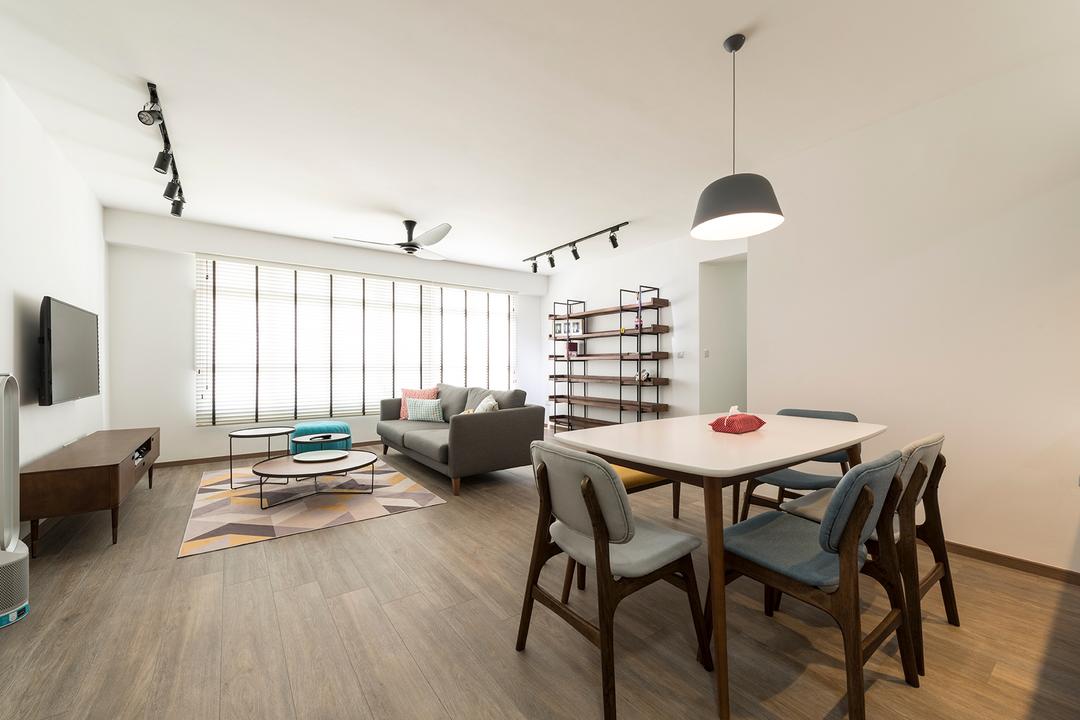 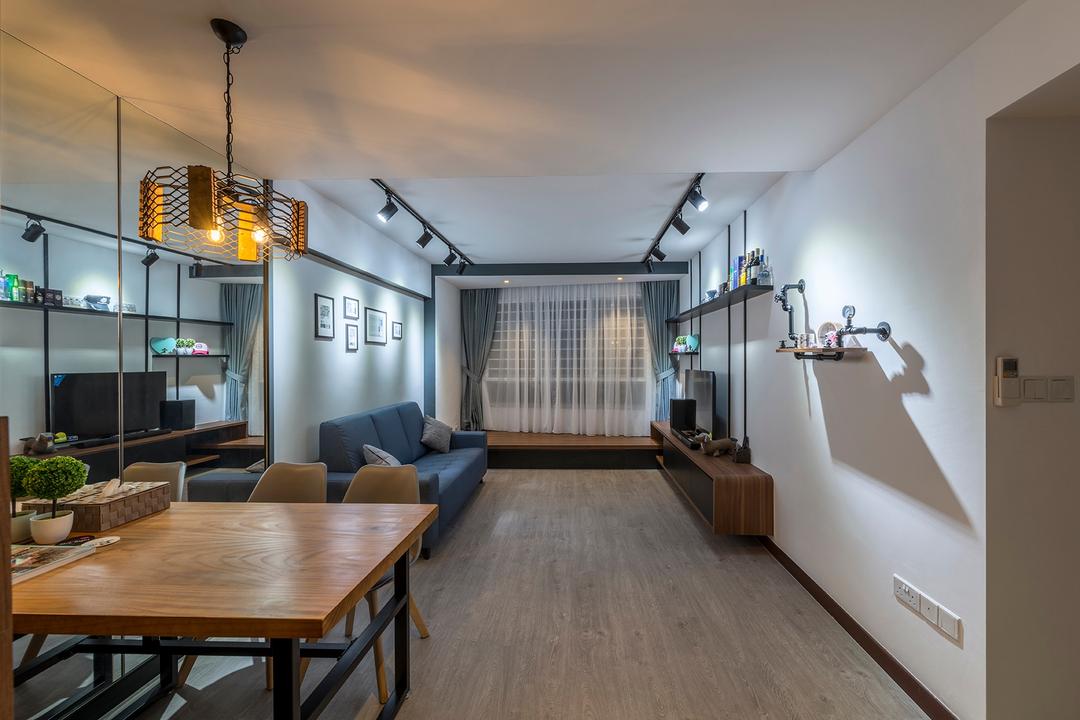 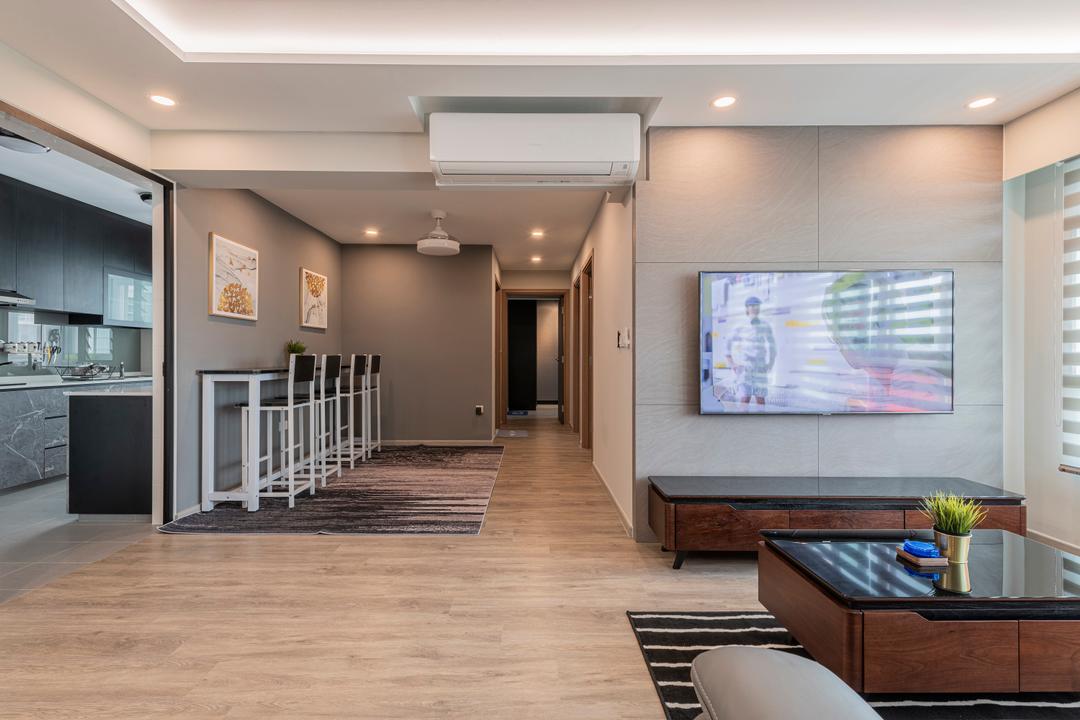 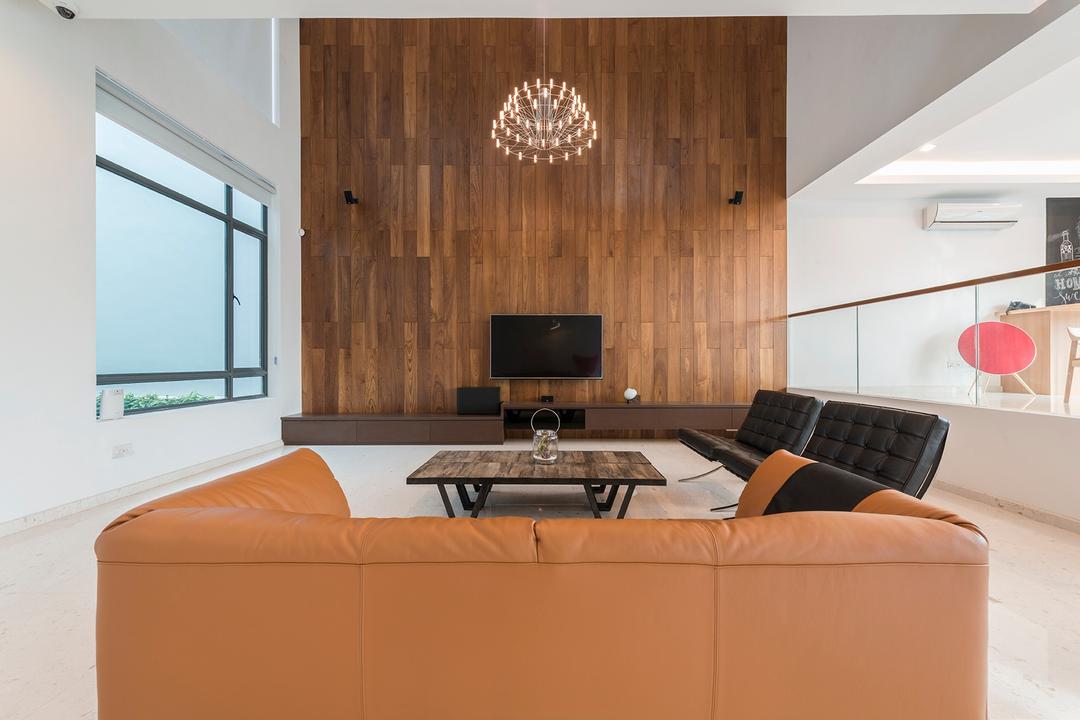 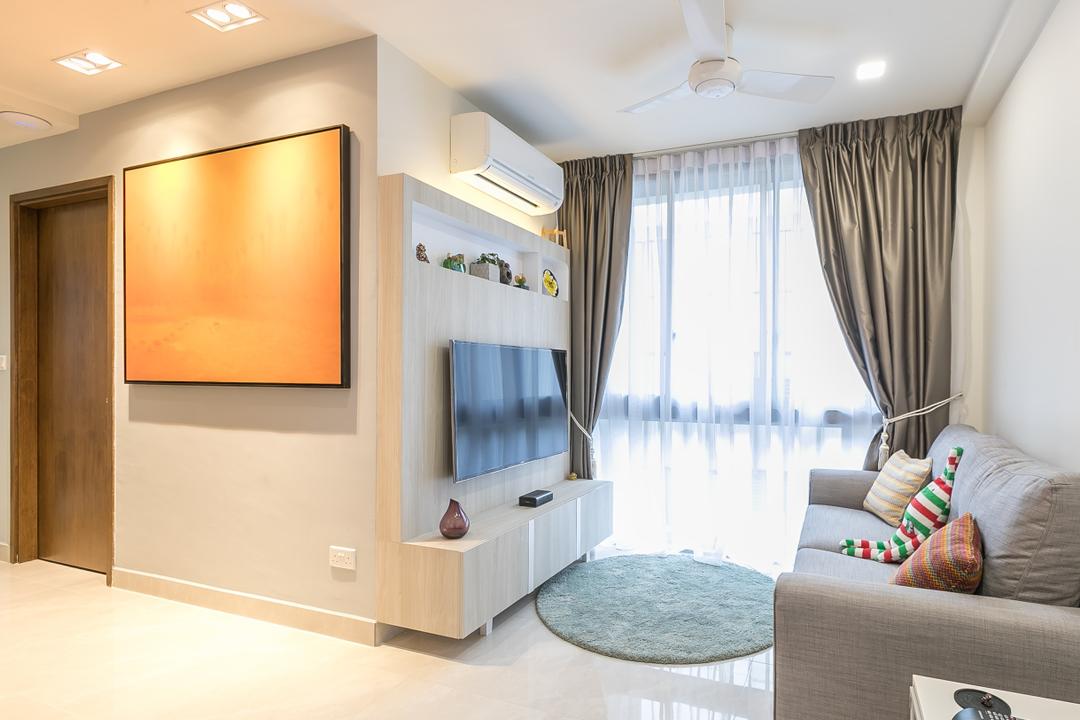 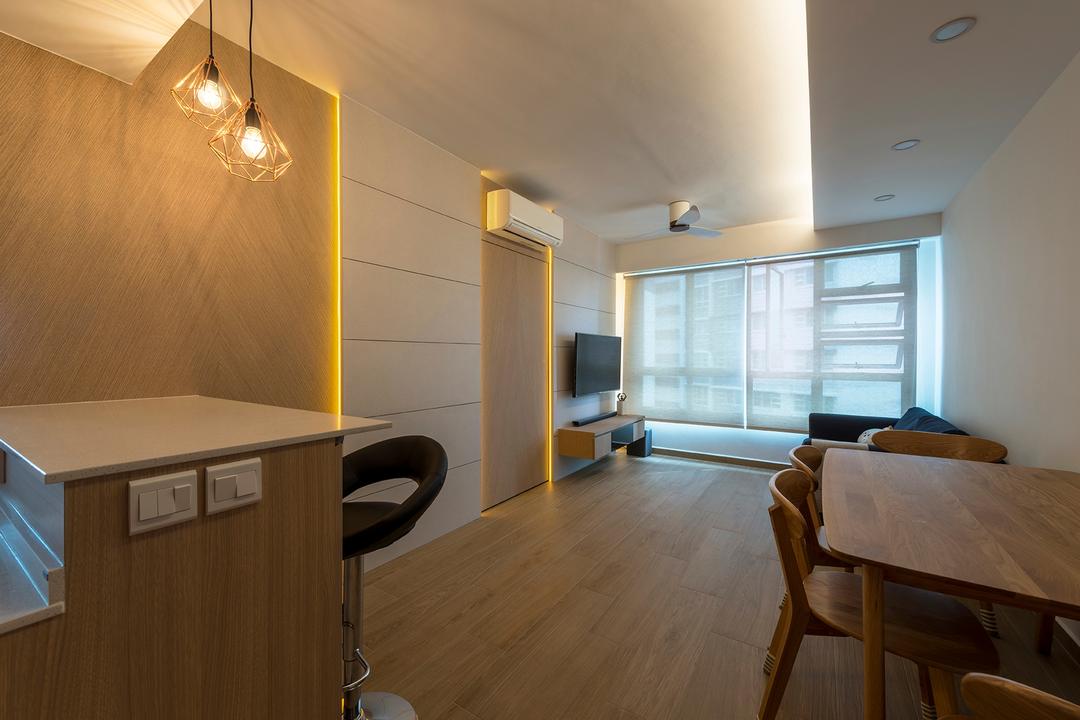 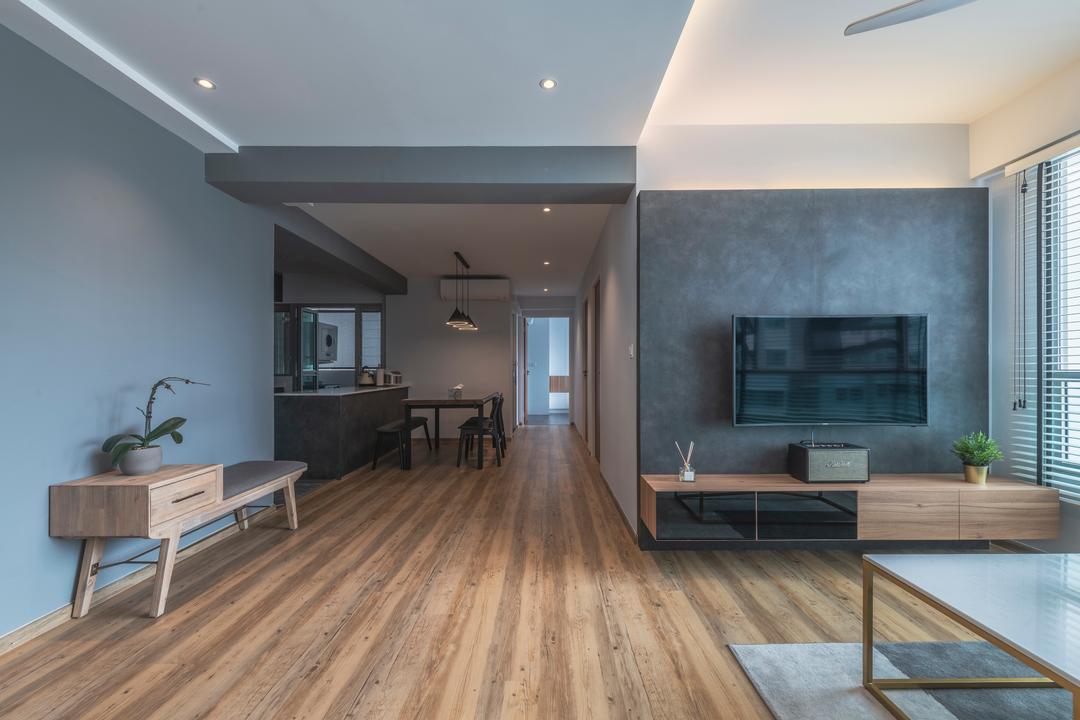 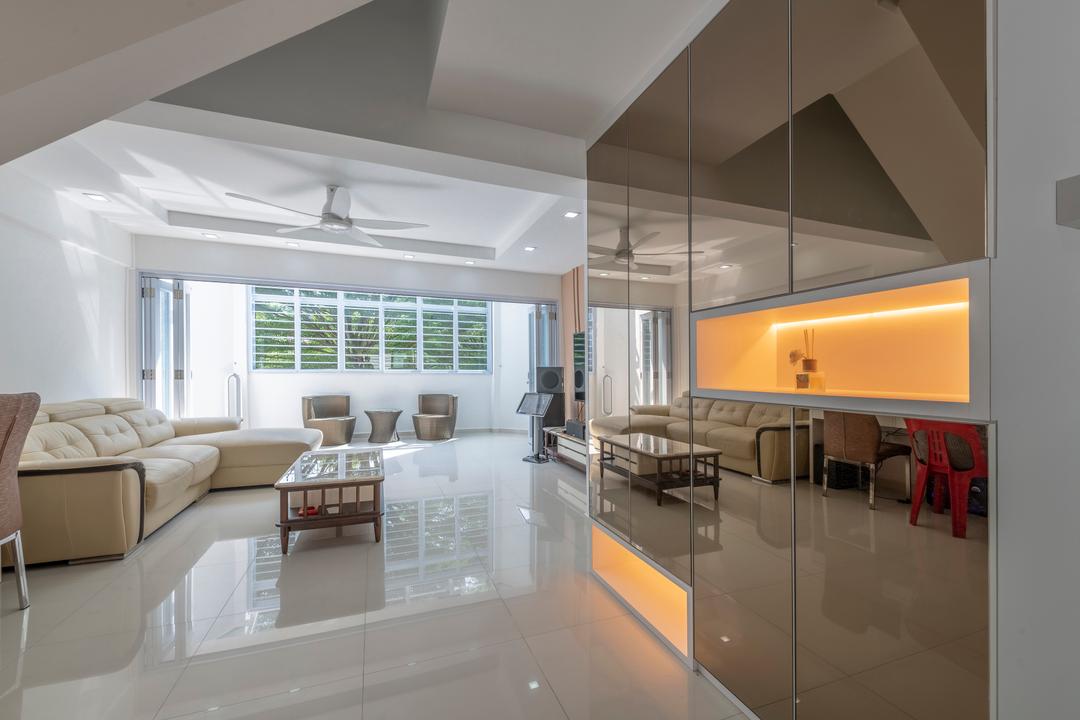 It has been a month since the handover of my house after renovation and I am writing this to share my experience with Two Big Guys and the ID whom with, Clarice Chea. My renovation journey with Two Big Guys and Clarice was an extremely pleasant one. Clarice was recommended to me by my friend, Jing Jing. The first meeting with her left a good impression as she was not pushy and sought to understand my needs and budget. She advised me on what was possible and was upfront with what was not. She also presented alternatives for my consideration. This first meeting left a deep impression on me. As in all renovation journeys , there are bound to be hiccups. Clarice was quick to resolve the issues. One of which was the tiles in the kitchen. As I have decided to keep the tiles and change the layout of the kitchen, Clarice managed to find suitable tiles to match, so much so that my friends were not able to distinguish between the new and old tiles. Not an easy task as my tiles were from many years back. Clarice was on site and send me photos to upgrade me on the progress. When there was a break from the renovation work, she will also inform me and assured me that the renovation will be done within the given timeframe. She was also always available to reply my queries and concerns. I recall that she was away for a holiday but still managed to get me a plumber when the master toilet was flooded. (PUB came to do testing and I was asked to turn on all the taps for 15 mins, thus the flooding). The issue was resolved within 4 hours! This speaks of her dedication to her work. The workmanship from Two Big Guys was excellent! I am especially pleased with the workmanship. What was more amazing was their follow up service. They are always on time and polite when they came to do minor touch up after the handover. I also would like to commend the uncles who did the carpentry as well as tiles for my renovation. They are indeed top notched and professional! My friends were impressed and I will recommended The Two Big Guys to my friends who are renovating. I would like to sincerely thank The Two Big Guys and Clarice for giving me such a wonderful renovation experience! First time engaged with this firm for my kitchen renovation. Jackie is able to explain to me in details for my questions during the requirement gathering and solution suggestions for my kitchen reno. The quality of the final delivery is satisfied and delivered on schedule. Yet price is reasonable and competitive, most important is no hidden cost and all the costs are listed in the quotation. Will definitely engage this firm again for my future renovation.

My experience with Michael Ong from Two Big Guys (TBG) was nothing short of horrendous. I renovated an office/shop space with Michael and the works included carpentry, wet works, ceiling and general renovation works (all except flooring). Initially, we engaged TBG because they were a friend of a relative, and the quote was competitive. The red first flag appeared when they submitted their quotation - the works were not itemised and clubbed together under one lump sum, further requests from us to breakdown the quotation was met with much reluctance. Subsequently, the experience just went downhill, getting from bad to worse. The details are too much, so I will just summarise it below: - Unresponsive and VERY irresponsible - Despite multiple reminders and requests for Michael Ong to clean up and move the items neatly to one side on a certain date when my flooring contractors were coming in to do the flooring - they just left the whole mess (debris, cement, tools) all over the place. My flooring contractors had to call us multiple times, and despite multiple attempts to reach Michael (which we couldn't), we had to reschedule with the flooring guys (with a fee) because it was not possible to do the flooring with all the mess around. - Zero customer service and non-existent after sales - claimed that it was not “part of his scope” to move the items neatly to one side. The flooring guys can "do it themselves" (when he made the mess!). He only agreed "to deliver the final product at the end date, everything in between it was up how he wants to do it and we have no say". - Dodgy work tactics - When we requested certain variation works, we asked Michael for a quote before starting work. However, he would always dodge our multiple requests for a quote. After which, he would commence work without ever informing us about the price. Only at the final invoice, that we realised that was his tactic to jack up the prices because the works would have already been done and we will have no choice but to pay for it. - Worst workmanship imaginable - Too many to name here but in short, our shelves and cabinet doors started falling apart after 1-2 months!? the hinges used for the cabinets were not soft close and there were obvious hints of cheap materials and shoddy work everywhere. The screws he used for our clothing racks were not heavy duty (despite us telling him that we would be using it to hang heavy stuff), he used light duty 2 inch screws instead of anchor bolts instead - result is the clothing racks collapsed after a few weeks (at this point, whats new?). We had to call in another of our contractor to fix all the racks and he was so surprised that he used those light-duty screws to fix clothing racks! - Threatened but no action - When the final invoice came and we were already so unhappy about the whole process, he insisted that we paid up all the outstanding amounts before finishing up the remaining carpentry work (probably sensing that we will dispute his claim because of all his mishaps along the way). When we disputed on the high costs of variation order, he simply swept it aside saying it is "market price" and will engage a lawyer and credit collector to come after us if we don't pay him the balance. When we mentioned that we will go to Small Claims Tribunal on this, he said he will absorb some of the variation costs and not charge for the remaining carpentry work that he has not completed. To rid of him and his extremely bad work ethics, we paid him in full to never have to speak or hear of him again. In conclusion, USE ONLY AT YOUR OWN RISK! 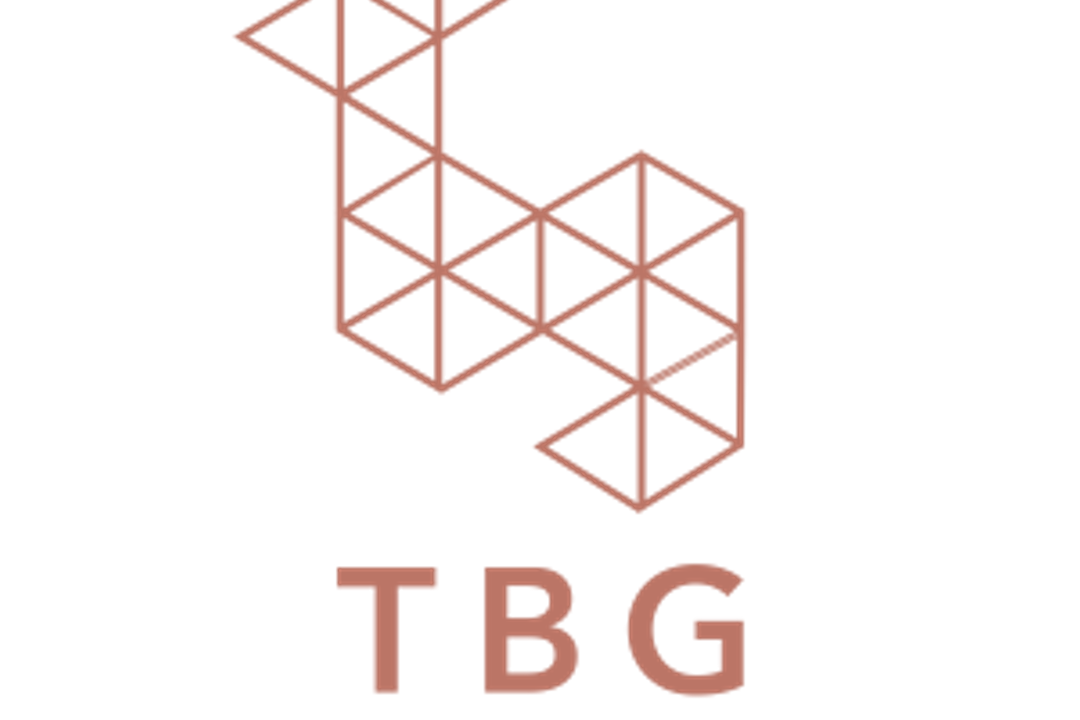 Response from The Two Big Guys

Dear Jonas, we are sad to see that we cannot meet your demands, and you have taken to vent your unhappiness in this post. Over the years we have served hundreds of customers, and we acknowledge and accept the fact that we can never fully meet the demands (reasonable or otherwise) of every customers. But in our capacity, we are always trying and improving, and have put a smile on many other customers once we complete the project. Our service and quality that we provide have withstood the test of times, and thus over the years, the number of the unsatisfied customer is less 1 percent. We are still expanding and improving due to our customers, whom we are unworthy grateful to, who have kept referring us on.

We still expanding and improving due to our customers, whom we are truly grateful for, who have kept referring us on. We don't feel we are self-entitled, and we don't begrudge past customers who feel left out when we stood by lie principles, we believe that good services and quality can always be improved. And that's what TBG stands for. We stood by our principles.

Read More
1 of 7
Completed your renovation with this firm? Write a review
About The Two Big Guys
With Chef D’entreprise Michael at the helm, coupled with skilled craftsmen and designers. TBG Interior Design delivers carefully curated/crafted furnishings to a home that homeowners would love to come back to.
Read More 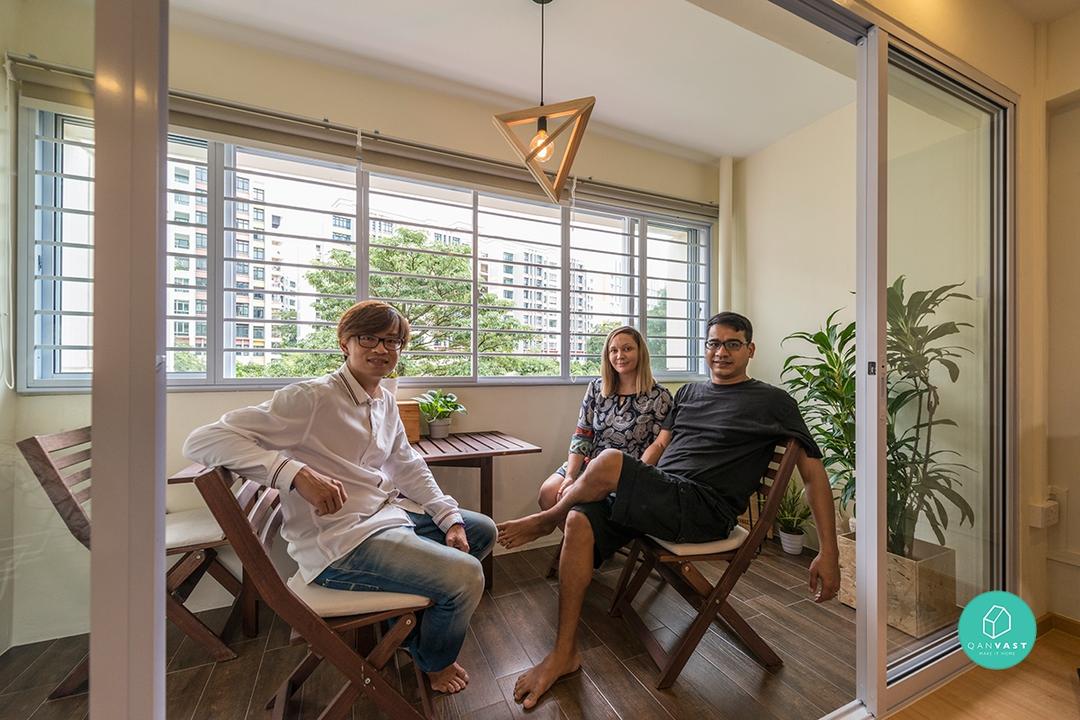 Wanting a European style home with a lot of inviting pockets of spaces, Faizal and Claire sought creative help from The Two Big Guys.

Where is The Two Big Guys' showroom?

Is The Two Big Guys an HDB-registered or a Casetrust-accredited firm?

The Two Big Guys is currently an HDB-registered firm. It is however not recognised under the Casetrust Renovation Business scheme.

Is The Two Big Guys popular among homeowners?

What is the average renovation cost on the projects completed by The Two Big Guys?

The average renovation costs of projects completed by The Two Big Guys (in the past year) are S$52,000 for HDB and S$48,333 for Condo.

3 people enquired recently
This firm has a minimum budget requirement of S$20,000.
The Two Big Guys is currently unavailable to take on new projects.