I’ve met up with about 10 IDs before deciding on De Exclusive. One major factor in my decision to work with Ronnie was his sincerity and he was easy to communicate with. He listened to my every request, and tried his best to fulfill each of them, at the same time he was very conscious of the costs involved, keeping me well informed so that I could make the best decision meeting my budget. Throughout the project, there were times when I changed my mind a couple times, and he was patient in fulfilling the requests. Ultimately I could feel that he acted in my best interests, and I truly appreciate this quality. Renovation started 1st January, and Ronnie managed to handover just a week before circuit breaker, with majority of the key renovation done. Some leftovers were completed after circuit breaker, and therefore the actual completion of project was in Aug. I am really thankful to Ronnie for keeping to the timeline so I could move in before circuit breaker, else it would have ended up in few more months of delay. Overall I am very pleased with the outcome, it turned out just the way I had imagined it. Anyone stepping into my house had nothing but compliments. The only Con I would say is that workmanship could be improved, especially in carpentry work. Not really a major issue in its entirety, but still visible when looking at them up close. 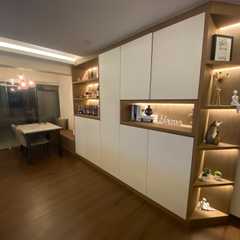 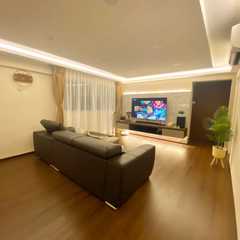 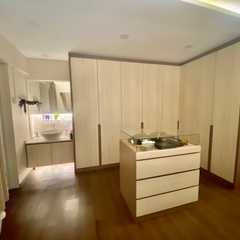 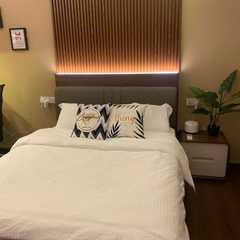 Ronnie Tan was our engaged ID. He was very friendly, approachable and transparent when we first met. Upon our second visit for the quote, Ronnie gave us his ideas on how to transform our main bedroom to accommodate our wardrobe space which we took a liking to it. Other IDs that we met just went along with our requirements. Ronnie took a step ahead and drew out his idea so we able to visualise it. Quote was transparent and was able to quote below our budget. We are able to upgrade to premium materials because of this. Thats when we decide to engage De Exclusive Interior as our ID of choice to renovate our 5rm resale. Communication with Ronnie was seamless. He's always there to reply and give his ideas and suggestions. Even recommended bathroom, window blinds and electrician contacts and got a very discounted and affordable rates. Inevitable theres bound to be hiccups and lapses during renovation, but when we highlight to Ronnie, he's able to resolve and rectify the issues promptly. One thing that was top notch was their carpentry. From their drawings to on site measurements and drawings and visual, we are able to see how it will look like after installation. Workmanship was amazing and completed a week before estimated timeline Love the way our house was completed. Post renovation was also greatly communicated as Ronnie assisted to register our warranty for vinyl flooring and countertop as well as other minor touch up works. I would like to share my experience working with Ms Eleven of De Exclusive Interior Group on our reno project. She is approachable, patience and responsible. During the renovation process, certain areas were not what we have expected initially. However, she tried her best to resolve and settle these issues within her means and abilities. We were satisfied with the effort and collaborative work she has contributed to make our dream home comes true. We started our reno in August 2020 and was completed within 4 months. Engaging De Exclusive services may not be the cheapest in the market but most importantly, our project can be completed within the reasonable time frame (though there was 2 to 3 weeks of delay). We are glad and thankful that we can move back to our house before Christmus. Thank you, Eleven and De Exclusive group Wishing you all the best. A dream home imagined and realised

We engaged William from De Exclusive mainly because we 'clicked' from the start. We got along very well due to William's easy-going and chill nature. It was a breeze working with William as he was able to give us good suggestions on how to turn our dream home into a reality. His proposed designs were what we had in our minds but because we were newbies, we didn't know how to realize it. William was able to communicate with us promptly even though we had many questions and many last minute change requests, he was very accommodating. We had a very tiny common toilet and didn't know how to make it work. William was able to propose a sleek shower screen design and adequate spacing for our tiny toilet. He made it into a beauty bathroom. We are very pleased with the workman ship of the floor tiles, bathroom wall tiles and carpentry. The quality was superb and we know that their craftsmen were all in-house, which was a big plus. William was generous with his ideas and often gave us better suggestions on placement of furniture that we would otherwise not had thought off. Our overall expense was within our budget and timelines were met, despite 2020 being a year of COVID. We are very pleased with our home, many thanks to our ID William and our on-site IC Edwin.

Read More
1 of 14
Completed your renovation with this firm? Write a review