This firm’s portfolio is not available on Qanvast.
A
A Wonderful and Insightful Interior Design Experience

Angela was very meticulous and patient throughout the renovation process, from the selection of materials to the technical aspects of the actual renovation. She went over and beyond the call of duty to ensure that I had a good understanding of the intricacies, while also sourcing for the most suitable yet economical materials to make the house of my dreams a reality. After the renovation was completed, her after-sales service was also highly commendable. When I encountered any issues with the items (e.g. lights) in the house, she responded in a timely manner and arranged for the necessary repairs promptly. I’m blessed to have had a designer like Angela and would highly recommend her to anyone who’s looking for an excellent interior designer who truly cares for their clients. 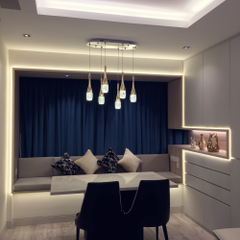 During my recent home renovation, Sharon has helped us a lot on choosing the right materials for the right fittings for our house. With a vast knowledge on materials and products, I am very satisfied with all the materials that she have chosen for us. There was no hassle throughout the whole renovation. She is very prompt for our queries. The house is handover to us within the deadline. All in all, it has been a great experience. With her professionalism and expertise, I will definitely engage her for future renovation projects and recommend to friends too. Thank you Sharon for the services rendered.

Last year, my husband and i bought a 5 Room HDB Flat which was not renovated for 20 years, we knew we had to do an extensive renovation and through some researches and past experience from other home owners, we appointed Haire Living. We knew Ivan was the right guy when the first few questions he asked us was about our work, lifestyle, hobbies because we knew that the design will be tailored according to us. He didn't waste time on making us "shop" with him. He shortlisted materials according to our budget and proposed to us. During the renovations, we bumped into him a few times at our flat as he goes down to check the workers' quality regularly. He also drew a timetable on the process of the renovation and we were skeptical about it but the most pleasant surprise was our place was handed to us before the timeline. My husband loves to entertain and now we have many friends and relatives coming over to our place for gatherings and we received many compliments about the nicely renovated apartment. No qualms in recommending him and his team.

We initially discussed our concept with a few ID companies, and selected Haire because they were able to take our concept and develop our ideas further than we had imagined without losing our theme, also their comprehensive proposal minimised cost creep. Sharon is an all round project manager, able to handle the tough demands of client, condo management issues, contractors and suppliers with a cool level head, giving that assurance that everything is under control. High standards were demanded and met from Haire and it’s Contractors, differences in expectations were managed with satisfactory results and the Budget was under close scrutiny from start to finish with regular updates on the total cost. Sharon was able to work to reduce costs where requested and was able to accommodate changes without fuss. Sharon was on-site most of the time to oversee the quality and concept realisation, her construction knowledge and personal standards was an essential secret sauce that realised our dream, and leaves us amazed 12 months later. Post completion there have been some adjustments necessary as with any major renovation, these were all managed with no quibble and least amount of inconvenience. Our project gutted a four bedroom 2000sqft apartment where every room was renovated, walls demolished, bathrooms removed to make way for walk in closets, new plumbing, new electrics and an amazing modern appearance created. Exacting standards and attention to detail caused a slight delay, however it was a result that was worth the extra wait. Sharon is a dynamic and passionate about ID and is supported by Angela who adds the Creative flare to the final product that helped us realise from more from our original concept, together they were a great team and one year on we are still communicating.

Read More
1 of 5
Completed your renovation with this firm? Write a review