We met Pui Yi from Design Chapterz at a Qanvast event. My wife and I liked the way she presented her designs and strikes us as someone who knows what she is doing after meeting a few other designers at the event. She is meticulous and never seems to give the impression that things are in a rush. Good project management skills within budget and on time. Thanks Pui Yi!! =) We have engaged Design Chapterz for their design and reasonable offer to renovate our new place. As it's only slightly above 70m2, space constraint is a major headache for us, a family of 4. Alexis was able to blend in our design with practical solutions for full height cabinets and storage areas to solve our problem. During actual renovation, she was accommodating and provided a personal touch to explain matters to us when there's hiccups or delay in any part of the renovation. Alexis also fully managed the renovation with our furniture suppliers independently without our intervention, thus saving a lot of time and effort for us to be on the ground, while keeping to the agreed timeline for us to move in on time. Kudos to her hard work and professionalism. Would definitely recommend her for her service and design expertise. 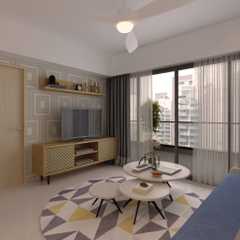 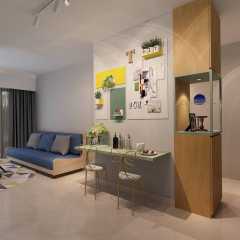 Reviewed by Vincent・Submitted 9 May 2017・ Project completed May 2017

We know about Design Chapterz through our friend, whom had done IT installations for their office previously. After comparing with some of the more well-known IDs out there, we decided to engage Design Chapterz as Glen is very friendly, straightforward and upfront on things such as the pricing. Even though their price is not the cheapest, they were able to relate well to the design we want, and had also managed to build a good rapport with us, which is important in renovation projects. The entire renovation process was good, with the usual minor hiccups resolved promptly. For example, the initial design for one of the false ceiling in one of the room was found to be not suitable during the process. Thus, Glen tore the ceiling down again and rebuilt it at no additional cost. We were also satisfied with the after-sales service, as Glen and his team attended to us when we highlighted some issues with the renovation works after it had been completed for some time, and came to repair the areas for us. He even told us to find him if there are any other problems with our house in the future. Hence, we definitely appreciate and am satisfied with the quality of their service. Completed in: December 2015 Cost of Renovation: $70,000

Meet only reliable firms
Connect with an interior firm on Qanvast to be part of the Qanvast Trust Programme and enjoy perks!
Review of Design Chapterz
S
Chua Chu Kang

Reviewed by Seraphina・Submitted 9 May 2017・ Project completed May 2017

We came upon Design Chapterz on Facebook while searching for interior design firms to renovate our house. We had engaged them due to their unique designs which are different from others. Also, during our liaison with the ID, they were able to understand and relate to what we want and are looking out for. The entire renovation process was very good, and the ID was very attentive as well, being able to answer our queries promptly and rectifying any minor issues that pop up along the way immediately. Completed in: September 2016 Cost of Renovation: $80,000

Reviewed by Eugene・Submitted 9 May 2017・ Project completed May 2017

We came to hear about Design Chapterz through my in-laws, as the company was one of their customer. So we went to check them out after visiting some of the more well-known interior design companies. In the end, we decided to engage Design Chapterz, as out of all the IDs we had visited, Design Chapterz was not pushy at all in selling their packages to us. Glen and Steven, whom were in-charge of our renovation project, were very responsible and responsive throughout the entire process, and even up till today, about a year after the completion of our house’s renovation. Issues which we highlighted to them during the works were also promptly resolved by the team. The company’s after-sales service is very strong too. For example, one of our walls started peeling about a year later, and we contacted Glen about it. He had replied promptly and managed to send the same team down to repair the areas which had peeled within a week. Hence, we are very satisfied with their service even though their price is not the cheapest. Completed in: December 2015 Cost of Renovation: $47,000

Reviewed by Charlotte・Submitted 9 May 2017・ Project completed May 2017

We came upon Design Chapterz while on the search for IDs in Joo Chiat, as the area has a couple of IDs there. We decided to engage the company as the ID could quickly grasp a sense of what we wanted, and gave us options quite close to what we were looking for. The entire renovation process was pretty good as the team managed to finish the project within the given timeline, and was responsive throughout. They could probably improve on providing more options during the planning phase as some ideas were only thought of during or after the renovation works. Completed in: April 2016 Cost of Renovation: $80,000

Reviewed by Celine・Submitted 9 May 2017・ Project completed May 2017

Design Chapterz was recommended to us by a friend whom had their house renovated by the company. As we did not have much time to do research on other IDs, we went straight to engage their services. The overall renovation job was good, with some changes made along the way. However, as different contractors were used for different works, there were some coordination issues. It was fine though, as these were to be expected in renovation works. Completed in: December 2016

Reviewed by Niluka・Submitted 9 May 2017・ Project completed May 2017

We got to know about Design Chapterz through a friend’s recommendation. Their workmanship was good as we saw it in person at our friend’s newly renovated house. Hence, we decided to engage the firm. The overall renovation process was fantastic, as the ID was extremely responsive and flexible, despite the busy period which the renovation works were being carried out. Everything was well managed, with any issues that came up along the way being resolved swiftly. I have recommended Design Chapterz to some of my friends as well, and they too, were very happy and satisfied with the service and design works provided by them. Completed in: February 2016 Cost of Renovation: $65,000

Nash was recommended to me through an ex-colleague whom had their house renovated by Design Chapterz. Initially, we had started off with other IDs, mainly the more well-known brands. However, we decided to engage Design Chapterz in the end due to its more affordable and reasonable pricing, and also our liaison with Nash was very comfortable. My husband and I were very impressed with their service, as the ID provides functional yet refreshing draft for the renovation, and had also supported and oversee the entire renovation process for us. This is especially crucial and helpful for us because we were planning for our wedding at the same time when the renovation was ongoing. Nash was very willing in helping us to settle any matters relating to our house, and is even very responsive and available up till today, when it is already one year after the completion of our house’s renovation. Hence, we were indeed very satisfied and impressed with the service provided by Design Chapterz, and have also introduced them to some of my friends, whom also had the same compliments for them. I would definitely recommend Design Chapterz to homeowners looking to renovate their homes with a peace of mind. Completed in: December 2016 Cost of Renovation: $43,000

Reviewed by Johnson・Submitted 9 May 2017・ Project completed May 2017

I got to know about Design Chapterz as one of the interior designers at the company was my school mate previously, hence I decided to engage his services. It is also partly because I did not went to look around for other IDs to compare with. The whole renovation process was generally smooth and hassle-free, except for some minor hiccups, which were promptly resolved by the ID and his team. Overall the renovation works were well done and completed according to schedule. Completed in: July 2016 Cost of Renovation: $43,000

Reviewed by Sharlene・Submitted 8 May 2017・ Project completed May 2017

We got to know about Design Chapterz through a friend’s recommendation. We had chosen the firm over 5 shortlisted ID, as our liaison with Nash, the ID, was very comfortable, and he was sincere and honest. He listened to and remembered all our needs and requests, and even took note of our lifestyle. Nash was also knowledgeable and brought up potential issues which we did not think about. The entire renovation process was great, and everything went well, having us pretty much left everything to our ID, while he give us updates on the progress along the way. Nash has a great taste in design and was very involved in the whole process, giving us opinions and suggestions on our furniture, which had allowed us to make really great choices. There were some small issues such as defects, but they were rectified almost immediately after we raised it up. Completed in: September 2016 Cost of Renovation: $45,000

We got to know Glenn Tan from a friend's recommendation. It's the best decision we made to sign up with Design Chapterz. Glenn was able to combine both tasteful designs and functionality for our home. He also listened to our needs and was patient when we couldn't make up our mind. He is very detailed oriented and has high standards for the quality of his work. When we first stepped into the house, we went "WOW". I highly recommend Glen and Design Chapterz to homeowners that are looking for IDs. Renovation completed in: August 2016 Cost of renovation : $30,000